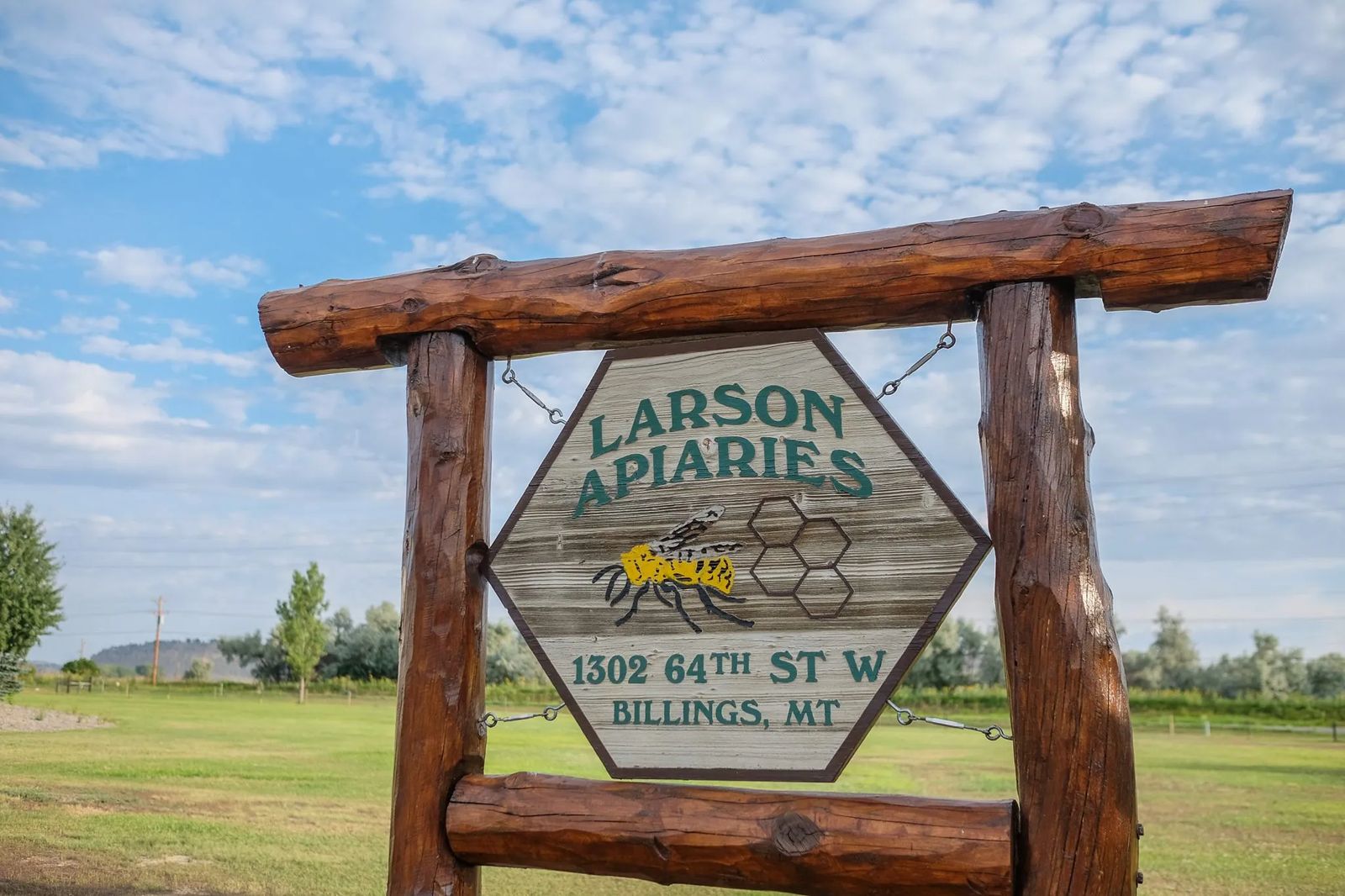 The sweet business of bees

The air inside Todd Larson’s processing plant is so heavy and sweet every breath provides a taste of honey. It’s peak honey harvest time, and Larson – a third generation apiary operator – describes the process as he lifts heavy supers off a pallet and removes the frames, which are packed, corner-to-corner, with honeycomb. A machine cuts the wax cap off the honeycomb cells and the frames move on a conveyor to an extractor that spins out the honey. Larson works alongside four other men on the line, and though it’s now partially automated, the honey harvest follows long-held, labor intensive traditions.

“Back in my grandpa’s day we cut all these by hand,” Larson said holding a honey-heavy frame in one hand and a small scraper in the other. “But we still have the same hive design today.” 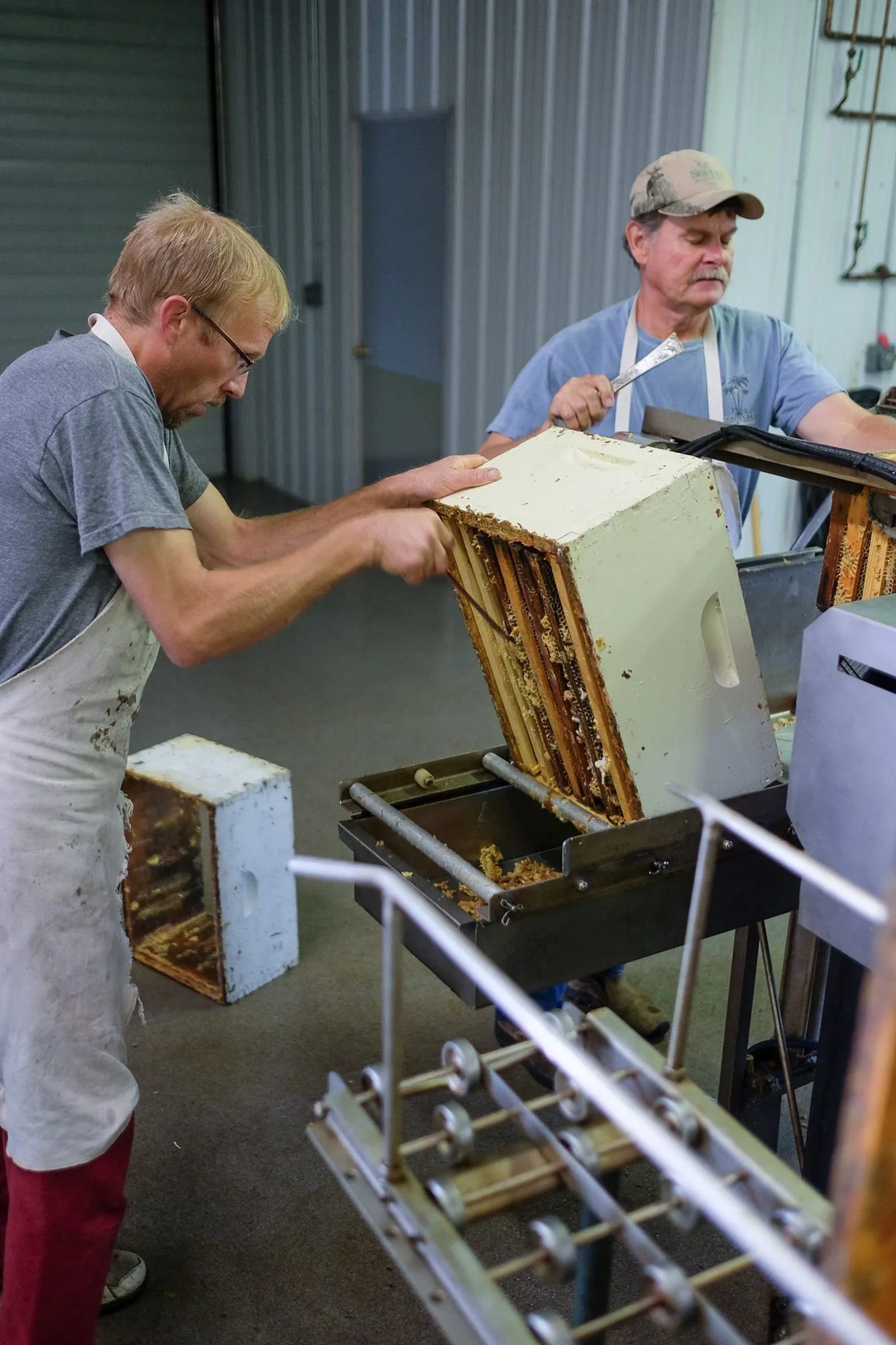 There are five supers per hive. The bottom two boxes are used as brood chambers and the top three are dedicated to honey production. Each super weighs between 60 and 100 pounds, and each hive produces an average of 70 pounds of honey.

On a midsummer’s day, it’s hot in the plant, but even hotter in the warming room where the supers are stored before the frames are removed. The honey needs to be warm – ideally 96 degrees – to be fluid enough to remove from the combs.

The raw honey is pumped from the extractor and heated to melt and separate the beeswax, then filtered again and pumped into a tank, which is used to fill 55 gallon drums. Honey is measured in pounds not gallons and each drum contains about 720 pounds of honey. 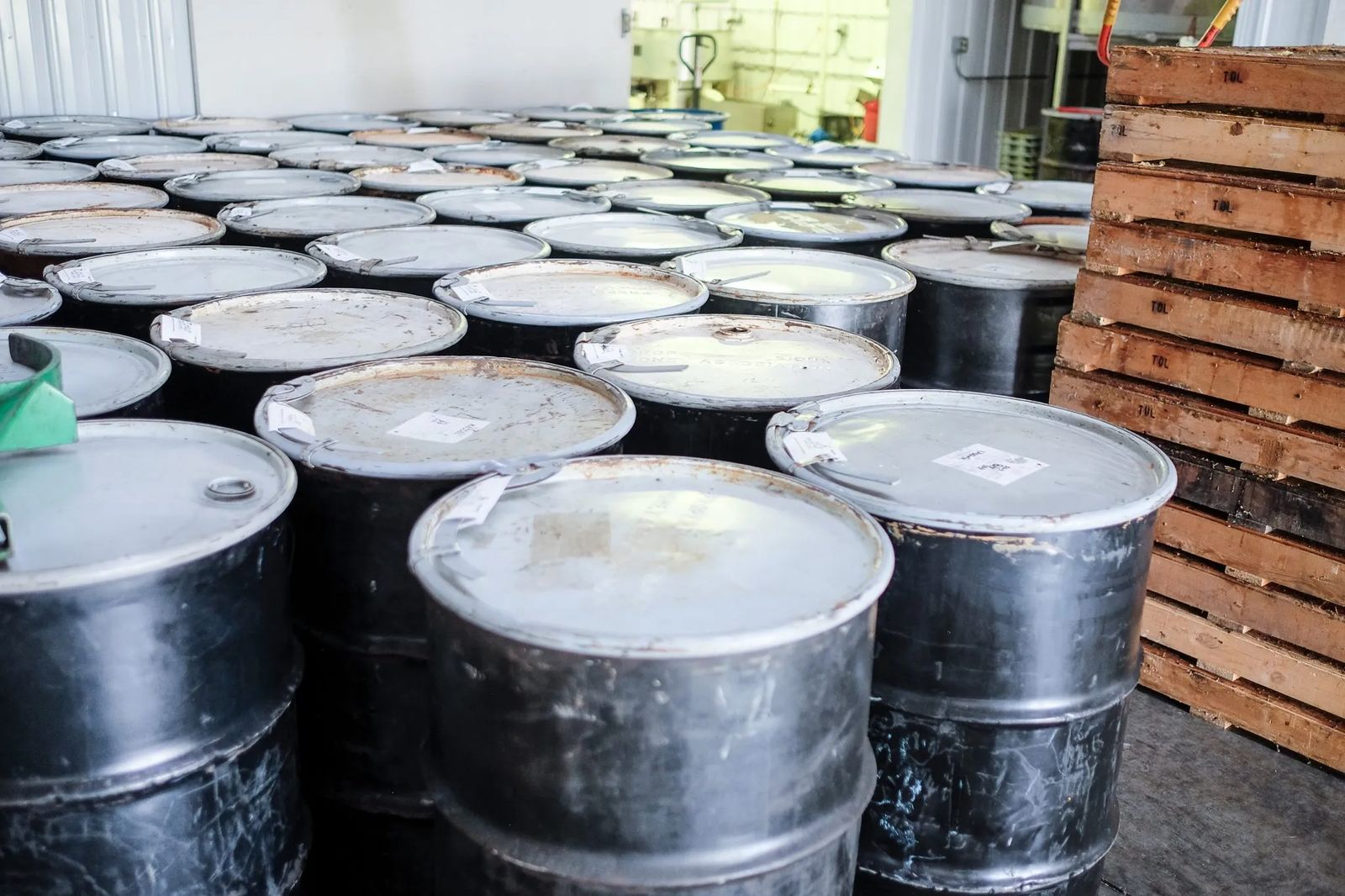 Todd Larson Apiaries is located on 64th and Grand, just a few miles west of Billings. It’s a family-run business. Larson’s wife, Terri, keeps the books for the company. They have two sons, Tyler and Ben.  Tyler is a computer engineer in Billings, and Ben, 26, works full-time for the apiary.

“Because we don’t have to worry about retail, we can focus our energy on keeping our bees,” Larson says. “It takes all our energy to manage our bee hives.”

Larson’s hives are in hundreds of locations along the Yellowstone River, along the Clark’s Fork River, and in foothills and valleys within about a 100-mile radius of Billings. Some of the nation’s best honey comes from Montana, where hives are placed near alfalfa fields or fields full of Dutch clover or yellow sweet clover. Honey from alfalfa and clover is the lightest colored honey, crystal clear, and as sweet as Montana sunshine. 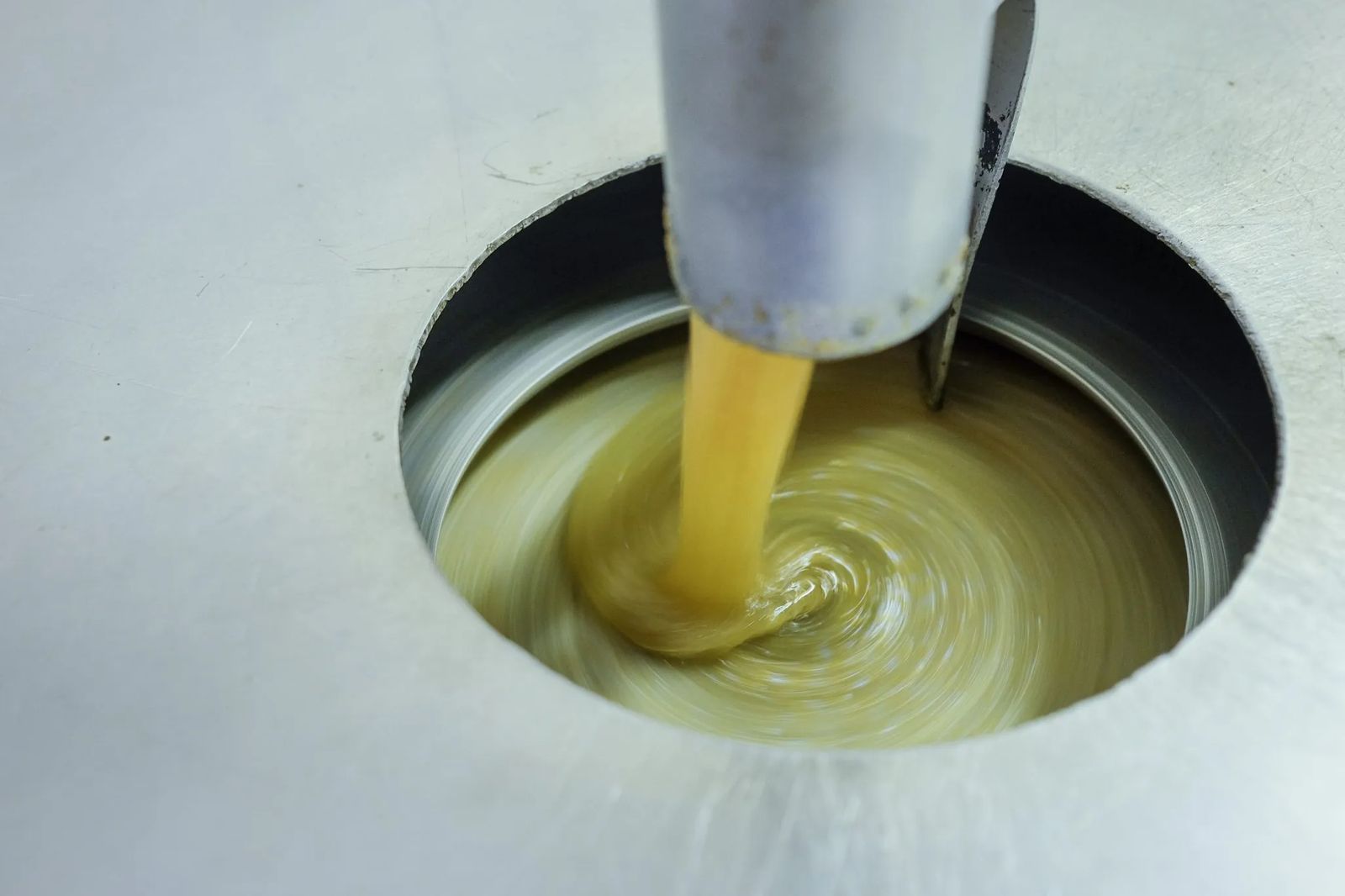 “In Montana we are lucky,” Larson says. “We can produce some really light honey that’s low in moisture. The honey packers really like it because they get less shrink.”

Another advantage honey producers have in Montana is the longstanding relationships between beekeepers and landowners. Year after year, from generation to generation, the same landowners contract with Larson to have bees on their property. In Montana, landowners see the benefit of the bees pollination as a fair trade for the little bit of space they take up during the summer.

Montana regulations require commercial apiaries to register their locations on private property, and they cannot be located less than three miles from another commercial producer’s registered site. The rule helps to stop the spread of disease.

The floral source bees need is only at its peak for 10-11 weeks in Montana, Larson says, and although each year can vary, the season usually peaks between the third week of June until the middle of August. Essentially, honey bees work for only about three months in the Yellowstone region.

“We have a short window so we manage these hives pretty intensively to get them to produce,” Larson shares. 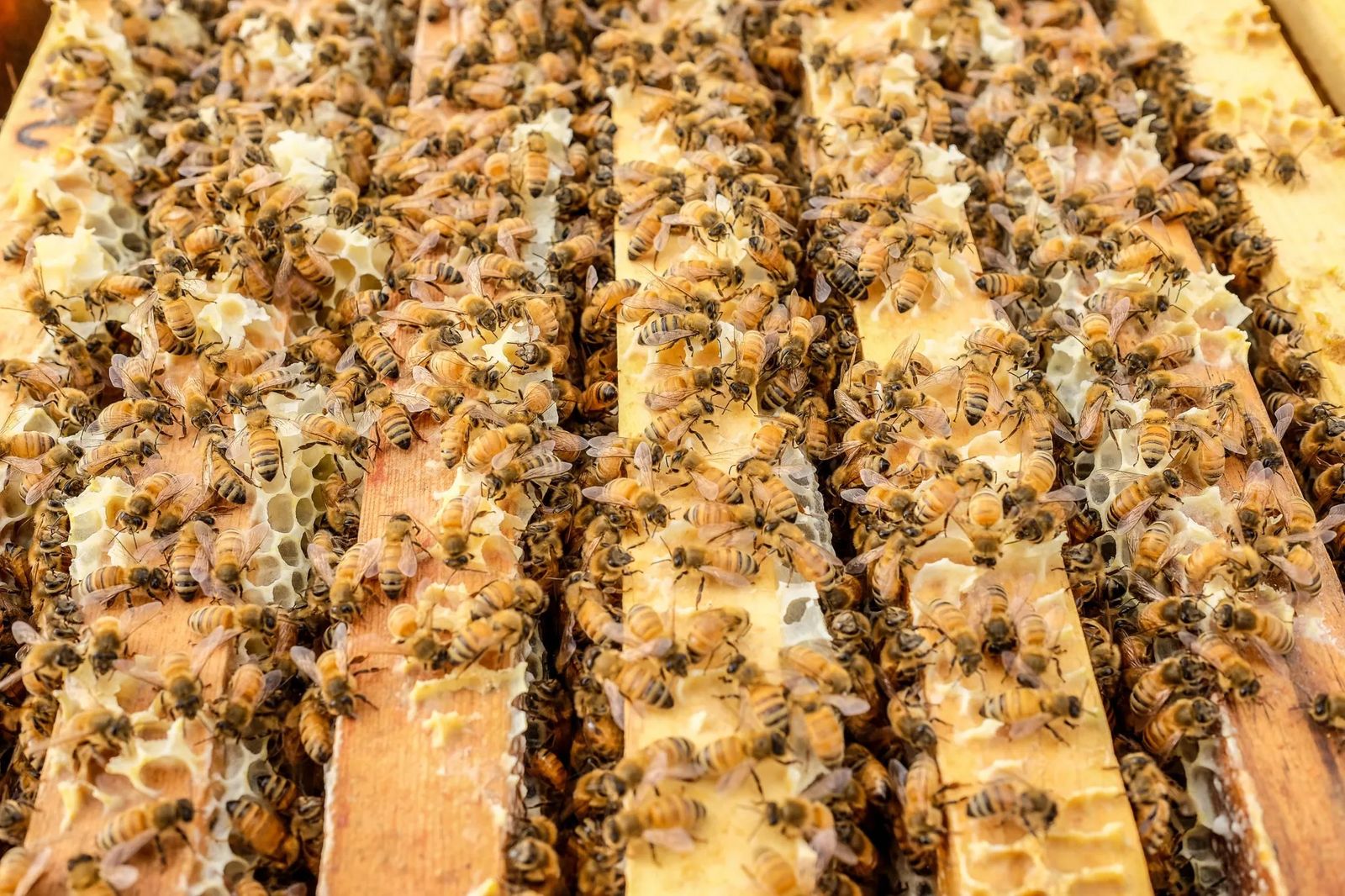 Each hive is home to about 60,000 bees. The vast majority are female worker bees, which can travel up to a mile and a half to gather pollen to make honey. They live about a month before their wings wear out, but they are being constantly replaced out of the brood chambers.

To maximize production, Larson ships his bees to California in the fall. In the winter months, the hives are kept in large holding yards and allowed to go dormant. The number of bees in the hive drops to about 25,000, and although the bees are inactive, they still need supplemental feeding to stay healthy, Larson says. In late February, the bees go back to work pollinating California almond groves.

Like Montana, the California operation relies on longstanding landowner relationships. The Larsons travel with the bees and tend to them the same way they care for them in Montana. However, because pollination is critical to California’s almond crop, the Larsons are paid for their bees’ service. Although the bees produce honey on the almond groves, it isn’t harvested. The bees need it for feed, Larson says.

Studies have shown honey bees provide the pollination needed to produce about one-third of all the food humans eat.

“We could still eat without them, but none of the good stuff,” says Larson.

Like everyone in agriculture, Larson watches the weather, looking for conditions that will be ideal for the flowering crops his bees need. In Montana, it is alfalfa and clover and in California it is almonds. Drought takes its toll on honey production.

“In the 80s there were some terrible years, but that’s where our persistence paid off – in those tough years,” Larson says.

Larson was just starting out in the family business in those days, and said he learned how to manage his hives for maximum yield and how to stay the course even when the paycheck wasn’t there. Larson never seriously considered doing anything else. Beekeeping was in his blood, and he’s thankful for the opportunity he’s had to be a part of a multigenerational family business.

“We are fortunate because they kept the tradition up for us,” Larson says, “and I’m just glad to give the next generation the opportunity we had.” 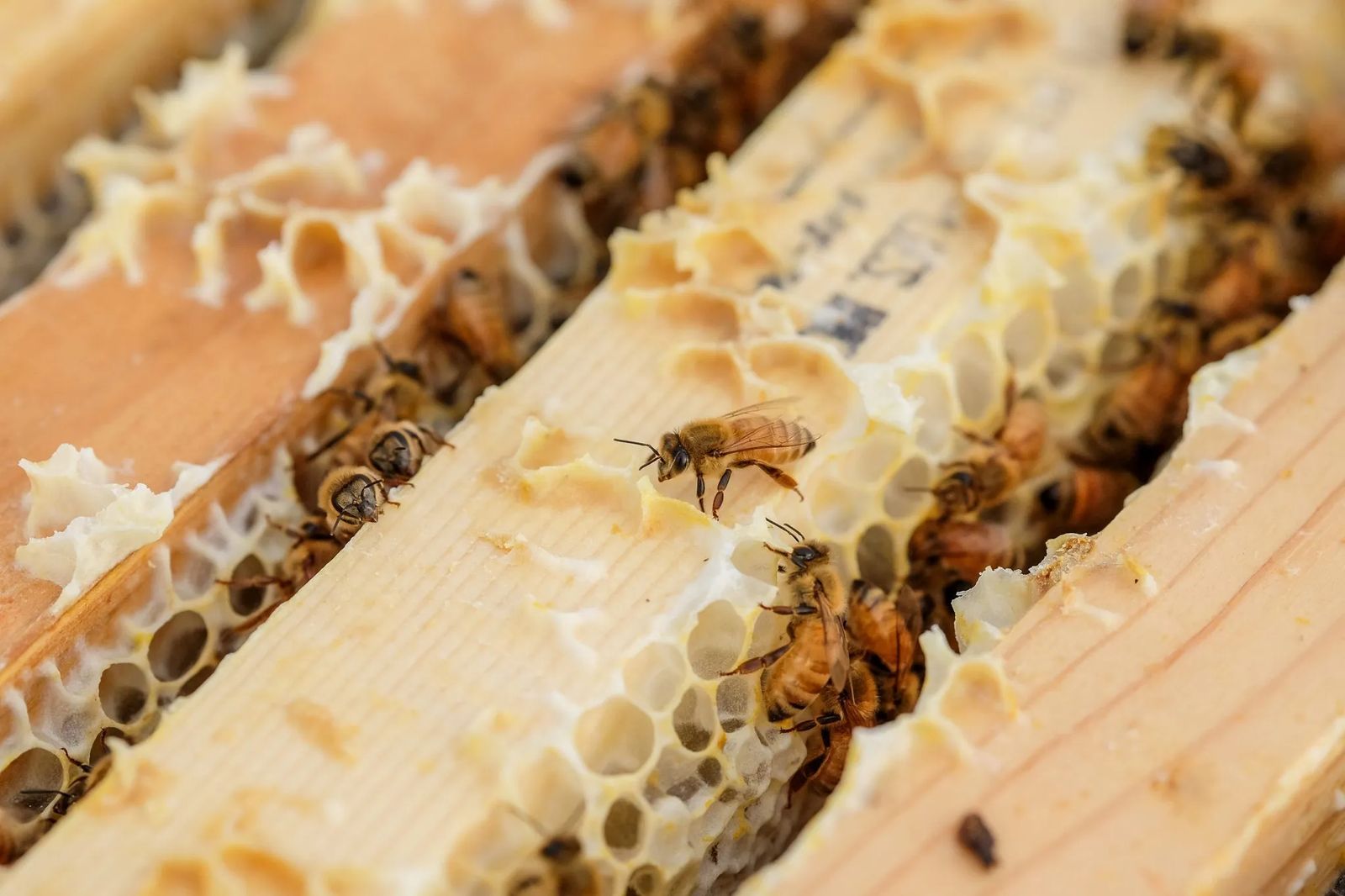 The bright white hives that look like little high-rises in farmers’ fields are making their way to the city as more people take up hobby beekeeping. The pursuit is gaining popularity as more consumers are looking for ultra-local food sources. It’s enough of a rise that recently, the Billings City Council approved hobby beekeeping in the city limits.

The ordinance limits hobby beekeepers to five or fewer hives, which is also the State of Montana’s definition of a hobby apiary. One hive, which can house up to 60,000 bees, can produce more than 100 pounds of honey. It’s a sweet deal, but hobby beekeeping isn’t an undertaking that should be taken lightly, says Sheri Kisch, a Laurel gardener who has been a hobby beekeeper for 32 years.

“At first I wanted the honey, but later I fell in love with these absolutely intelligent little creatures and I loved what they did and how they did it,” she says.

“You have a responsibility to learn everything you can about bees,” she says.

Hobby beekeeping kits can be purchased for between $300-$500, and a queen and her bees can be mail-ordered or purchased from a local apiary. Honey harvesting equipment is an additional investment that can cost up to $1,000. Beehive care isn’t a huge time commitment, Kisch says, but it requires a constant watchful eye, year-round.

New hobbyists or people who are just considering beekeeping can connect with other seasoned beekeepers and learn the art from them. The Yellowstone Valley Beekeepers meets on the second Tuesday of the month at 6:30 p.m. at the Billings Public Library. Kisch says curious newcomers are always welcome. 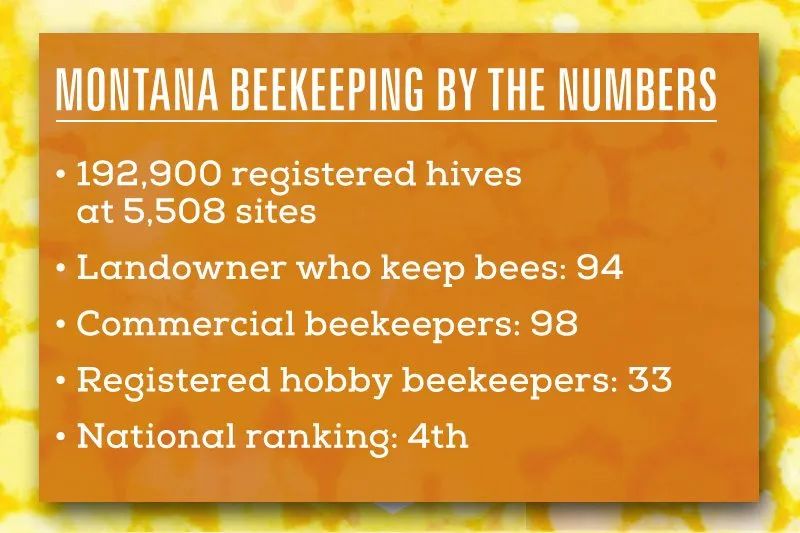