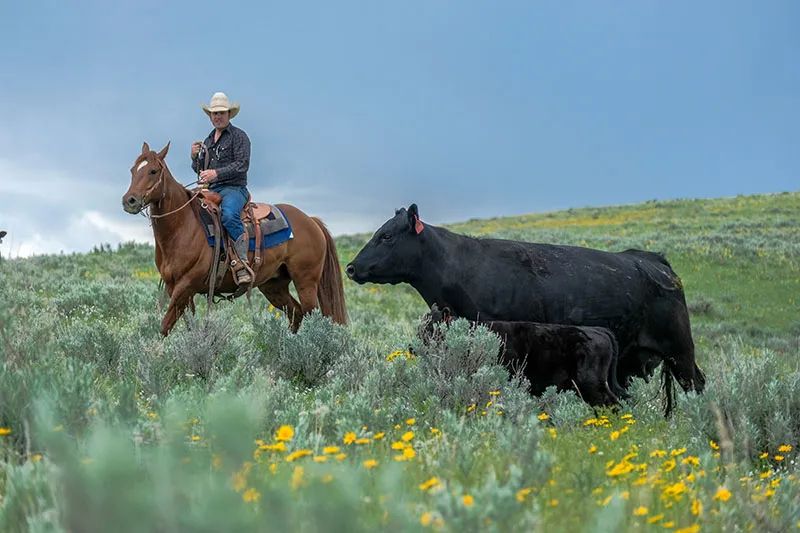 Bred for the Land

Loyning Angus has a different take on cattle breeding genetics

Rancher Ben Loyning is a man who really likes his livestock. On the Facebook page for Loyning Angus, the operation he runs near Warren, Montana, here’s what he had to say about one of his bulls, Equinox 7:

“He is sound from the ground up with decent feet, proper pasterns, the right hock set, and the right slope from hooks to pins. … He was blessed with the type of head I like most, a head that will be beautiful on his daughters.”

He had more to say about this bull, and added at the end of his description, “I don’t generally like to use all the flowery language that I did above but he’s hard to describe otherwise.”

Loyning is like that in conversation, too, revealing a fondness for his animals that has him speaking in superlatives, struggling to find just the right words not only for his livestock but also to describe the nature of his breeding business. Because for all his “flowery” language, Loyning is not hung up on mere beauty, or weight, or other standard ways of measuring a cow’s apparent value. 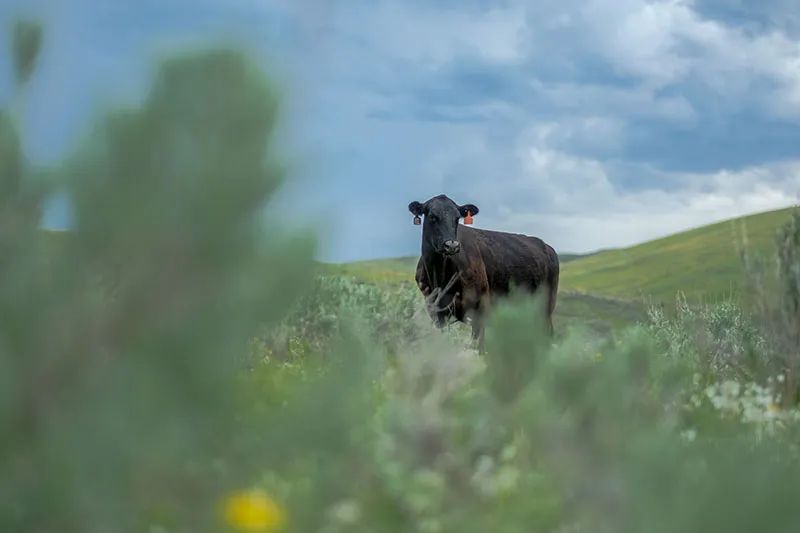 For him, it’s all about breeding for cows that fit the environment that he and his neighbors ranch on, the high-altitude, low-moisture landscape that straddles the Montana-Wyoming state line.

“The best cow is the cow that makes it to 10 years old without being noticed in any way, good or bad,” he says. “That means she isn’t raising the biggest calves, she’s not raising the smallest calves, and she never had any issues that needed human interference to help solve. … You want them to be just scrappy cows that can take care of themselves.”

He elaborated on what he looks for in a cow in another Facebook post, this one from last November.

“Our cows earn a living,” he wrote. “No handouts are given, nor are they expected. We provide the cows with enough to get by on always, with opportunities to excel when Mother Nature cooperates.” 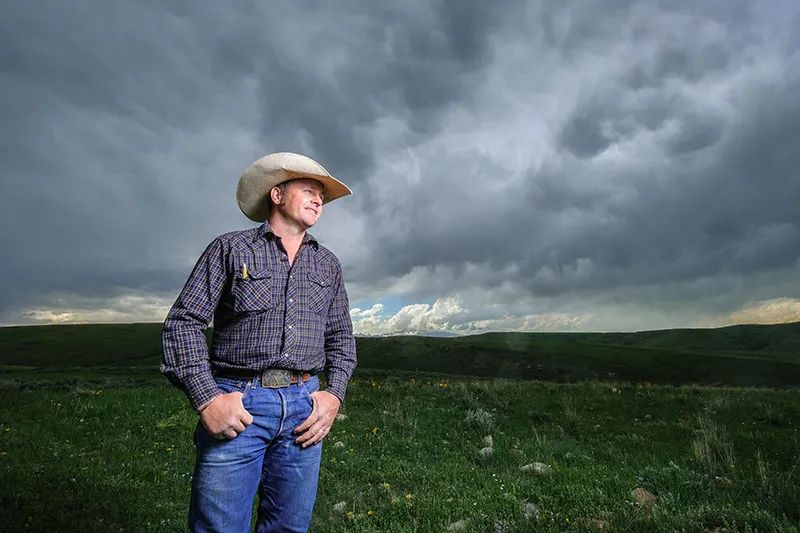 For Loyning, the learning curve stretches back almost 130 years, to 1890, when his great-great-grandfather, of English descent, came into this region with cattle from Oregon. The herd ended up in Sheridan, Wyoming, and his ancestor first settled in what is now the Dayton-Ranchester area. He later moved to Sage Creek, which runs through the Loyning Ranch today. The family has always had a few cows but mostly ran sheep, which Loyning says is probably the more ideal livestock for many parts of Montana and Wyoming. But by the time he was a boy, in the mid-1980s, his family had switched over to cows exclusively. Predators were a big problem for the sheep, which were also labor-intensive at a time when it was getting harder and harder to find workers.

“I think it was ’86 or ’87 when we switched over to completely cows here,” Loyning says. “I was just a young kid. I can just barely remember having sheep.”

In the early days, they had a cross-bred herd of cattle, with lots of Herefords mixed in with some “exotic breeds” that were bred for both milk and beef. They were big, muscular animals that had temperament issues and birthing problems. The move toward herd uniformity began with Loyning.

“My summer’s wages were sittin’ in my pocket and I wanted to spend them really bad,” he says, so he used his money to buy a purebred Black Angus heifer at a bull sale, in 1993. “So this is 25 years I’ve been in the purebred Angus business,” Loyning says. “I bought her when I was 12 years old.”

He left the ranch to attend college in Miles City, and also got some training in artificial insemination put on by a semen salesman. He took his skills back to the ranch, where at first he followed traditional practices, breeding for typical characteristics until a series of events changed his way of thinking. 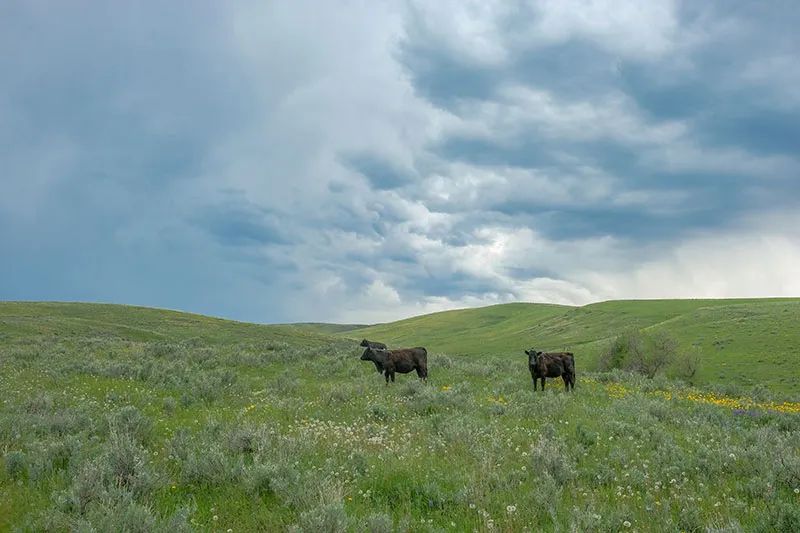 In 2005, he bought 25 purebred Angus cows from the Beartooth Ranch in Absarokee, which was being sold off by actor Mel Gibson. The cows had “all the popular genetics of the day,” Loyning says, and he thought this was the ticket, the start of a really good purebred herd. But while there was nothing technically “wrong” with the cows, Loyning says, they just weren’t the right cattle for his land.

“That started me on a journey to find out how to make a better mousetrap, basically, to match these cattle to our environment,” he says.

He started off by reaching out to Larry Leonhardt, of Shoshone Angus in Cowley, Wyoming, south of Loyning’s place. Leonhardt was influential in the breeding world, and Loyning had long admired the Leonhardt cows he could see while driving past that ranch.  He gave Leonhardt a call and was invited down to see him in January 2006.

“We just started a pretty neat relationship that taught me a lot about genetics,” Loyning says. He called Leonhardt a great mentor with lots of life experience to boot. He also called him “the only genius I’ve ever met in my life.”

Even so, Leonhardt was growing corn silage for his cattle, so Loyning asked him whether anyone was using his genetics but also raising cattle mostly on native grass, supplemented by hay at calving time. As Loyning says, he wanted to meet somebody who had demonstrated that Leonhardt’s genetics “worked in the hills, not just the barnyard.”

Leonhardt referred him to Dennis Voss, of the Horse Butte Ranch near Two Dot, Montana. It was to be another fateful encounter. Voss, who had also taught art at the University of Montana, came at genetics “from a whole different angle,” Loyning says. “He comes at it with an artist’s eye.”

Loyning says his father and grandfather were both natural-born stockmen, pragmatists who taught him a lot. So did Leonhardt, described by Loyning as extremely analytical. Voss was different.

“He kind of helped me see things in a different way than we were taught in 4-H or FFA or whatever, in a way that is more in tune with what Mother Nature would want with an antelope or a deer or an elk. Nature, she doesn’t tolerate extremes in any way. You see one antelope and they all look alike.”

And that’s the mindset Loyning has kept ever since, aiming his genetics at producing “the middle ground, the average, like nature. It’s really the best for ranchers that are in a grass environment in larger areas.” And though some people might scoff at him, Loyning says another important, though unmeasurable trait, is intelligence, the kind of maternal intelligence that tells a cow how to find the best shelter if she is trying to give birth in a snowstorm.

At breeding time, he’ll choose a cow closest to the genetic profile he’s looking for and flush her out to obtain her embryos, then implant the bull embryos in other cows. Those bulls will be used later to naturally service cows. Last year he turned out eight sons from the same cow. 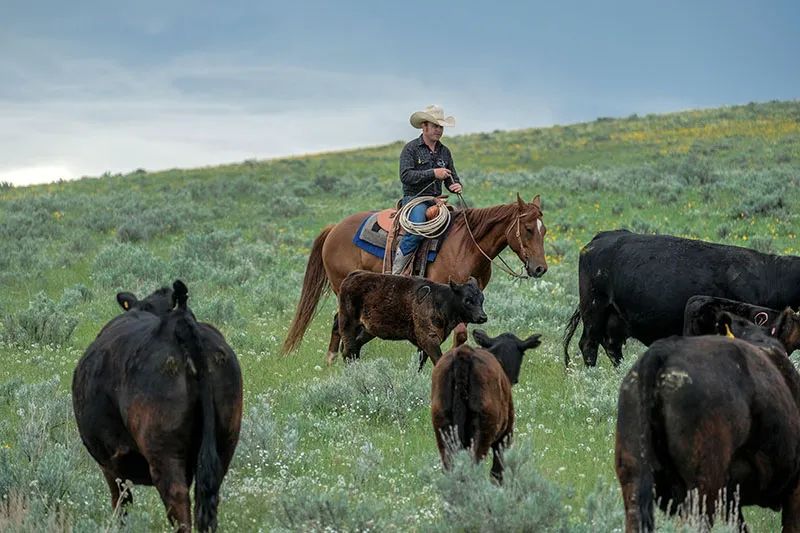 Using mostly natural methods helps in another way, Loyning says, because he’s convinced that bulls, like human beings, are attracted to certain cows, and vice versa, based on pheromones, choosing mates with immunities lacking in one or the other, to increase the number of immunities in offspring.

Loyning and his wife, Brook, ranch with Loyning’s parents, but he and Brook run the Angus operation separately. They currently have about 175 purebred cows and sell 30 to 40 bulls a year. They don’t bring in any “outside” females at all. Because they are breeding for a specific environment, Loyning says, “90 percent of our bulls go to our fence-line neighbors.”

They are planning to have an online production sale in the spring of 2019, but no matter what else they do to extend the business, the core of it will remain the same, Loyning says.

“A penny saved is a penny earned,” he says. “Labor and feed expenses are the biggest expenses in this industry. Our cattle are designed not to take as much, input-wise, in either of those categories.”

And he’s looking to the future, too, toward his children as adults.

“We’re pretty unique within the industry,” Loyning says. “We’re developing our own genetics here,” rather than using a “conglomerate of other people’s genetics,” as is usually the case.

And he’s looking to the future, too, when his children, Wil, Sam, Josie and Gus, the fifth generation of Loynings to live on the ranch, are adults.

“We’re developing something that’s going to be completely unique to us,” he says. “It’s a legacy or an heirloom that we can leave these kids with.”