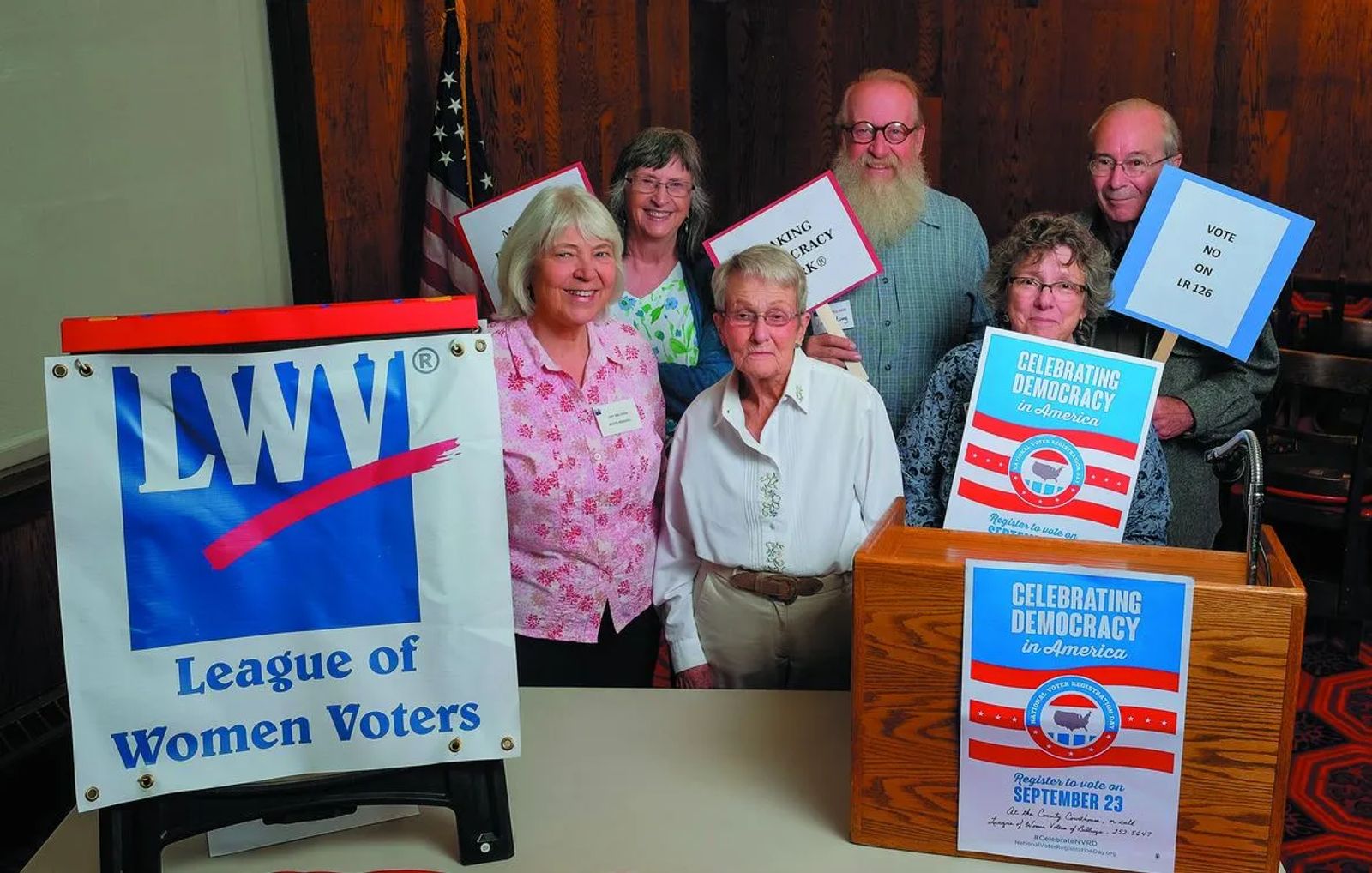 “Those women suffragists had a lot of guts. They were out there at a time when women weren’t supposed to think for themselves or have an opinion," says Mary Jane Albrecht, a stalwart and devoted member of the League of Women Voters of Billings (LWV-Billings). “It took a long time to achieve voting rights for women.”

As Mary Jane reflects on the 100-year anniversary of the 19th Amendment which gave women the right to vote, she knows one organization grew out of this very historic occasion. That's how the League of Women Voters rose up and took shape. Mary Jane joined while living in Colorado in the 1970s. Even when following her husband's job and caring for two daughters across five states and seven cities, she’s maintained her membership. She was President of LWV-Billings twenty-five years ago in 1989.

“I am an independent thinker,” Mary Jane will tell you. Now an energetic great-grandmother and eager for the next challenge, Mary Jane wonders what she’d have done without the good friends and civic education she’s gained through the League of Women Voters.

“LWV keeps me going. I’m not one who votes by party or which way the wind blows. We believe in what we are doing, even though we don’t always agree. That’s the beauty of the League.”

“We aren’t Republicans or Democrats,” says Betty Whiting, current President of LWV-Billings. “We are full of independent thinkers like Mary Jane.” Betty describes the League as “non-partisan” which means it isn’t aligned with any political party or candidate.

“Unlike many political organizations, our focus is issues, not candidates,” Betty says. “We take positions on particular issues only after considerable study, debate and consensus.  Once we have studied an issue, we provide information to voters so they can make up their own minds.”

MONTANA WOMEN AT THE FOREFRONT

On November 3, 2014, Montana women will celebrate a century of voting rights. In 1914, 100 years earlier to the day, Montana’s all male electorate approved women’s suffrage legislation by a 53 to 47% margin. Montana was the 12th state in the Union to give women the vote. 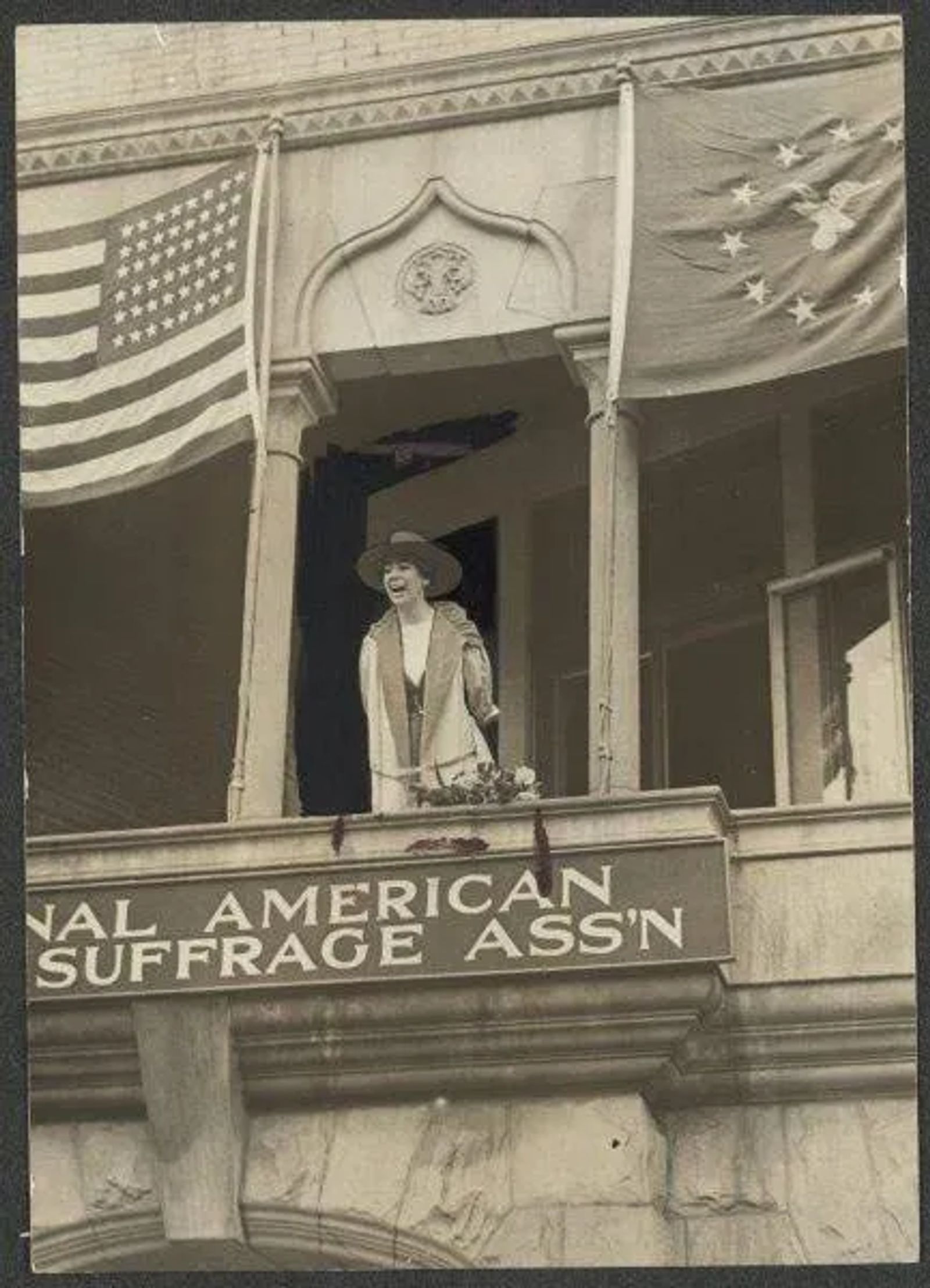 In 1916, on the heels of a successful suffrage campaign, Montanans elected Jeannette Rankin (R) to the U.S. Congress. Upon arriving in Washington, D.C., Congresswoman Rankin was warned that every vote she cast would be scrutinized by those who maintained women were incapable of making rational decisions.

While Jeannette Rankin was making news as America’s first Congresswoman, a Billings woman was making news in front of the White House. Hazel Hunkins and other members of the National Women’s Party engaged in civil disobedience on Pennsylvania Avenue to protest President Woodrow Wilson’s resistance to a 19th Amendment to the U.S. Constitution, written to guarantee women’s voting rights nationwide. They saw themselves as patriots seeking liberty for American women, just as American men were fighting for liberty on Europe’s WWI battlefields.

It took four more years for President Wilson to change his position, for Congress to present the issue to the states and for the required number of states to ratify the 19th Amendment. Only then did the National American Women’s Suffrage Association dare to envision a national organization through which any voter, male or female, could become better informed, whether as an advocate on issues or as a government participant. The new organization would be known as the League of Women Voters of the United States (LWVUS). New chapters sprang up across the nation, including Billings.

In May 2014, the LWVUS issued a Statement of Position on federal agricultural policies after months of study by League chapters across the nation.

“I had no idea that agricultural policy was so complex,” says Mary Jane. “It involves food stamps, pesticides, crop subsidies and human and environmental health concerns. The world is changing and as League members, we want to stay informed.”

In a recent press release, LWV-Billings estimates that 24% of Americans who are eligible to vote aren’t registered. Of those who are registered, nearly 75% don’t vote regularly. To improve those numbers, LWVUS hosts National Voter Registration Day. On September 23, 2014, League members will have voter registration materials available at several Billings venues, including RiverStone Health and the Yellowstone County Courthouse lobby.

Women’s suffrage was born out of sacrifice and unwavering belief that women were as capable as men to make intelligent decisions in the voting booth. The effort never stopped after a woman’s right to vote was protected within the U.S. Constitution. It lives on within the League of Women Voters, created to educate voters across American and improve citizen participation in government at all levels.

Mary Jane, Betty and members of the LWV-Billings come from a long line of women who take their voting rights seriously.

The League of Women Voters of Billings meets the first Thursday of each month at the Elk’s Club on Lewis Avenue. A no-host lunch begins at 11:30 a.m. followed by an educational program. There are no meetings in July and August. More information can be found at: www.lwv.org and www.lwvbillings.org.

The Women who made National Women’s Suffrage possible 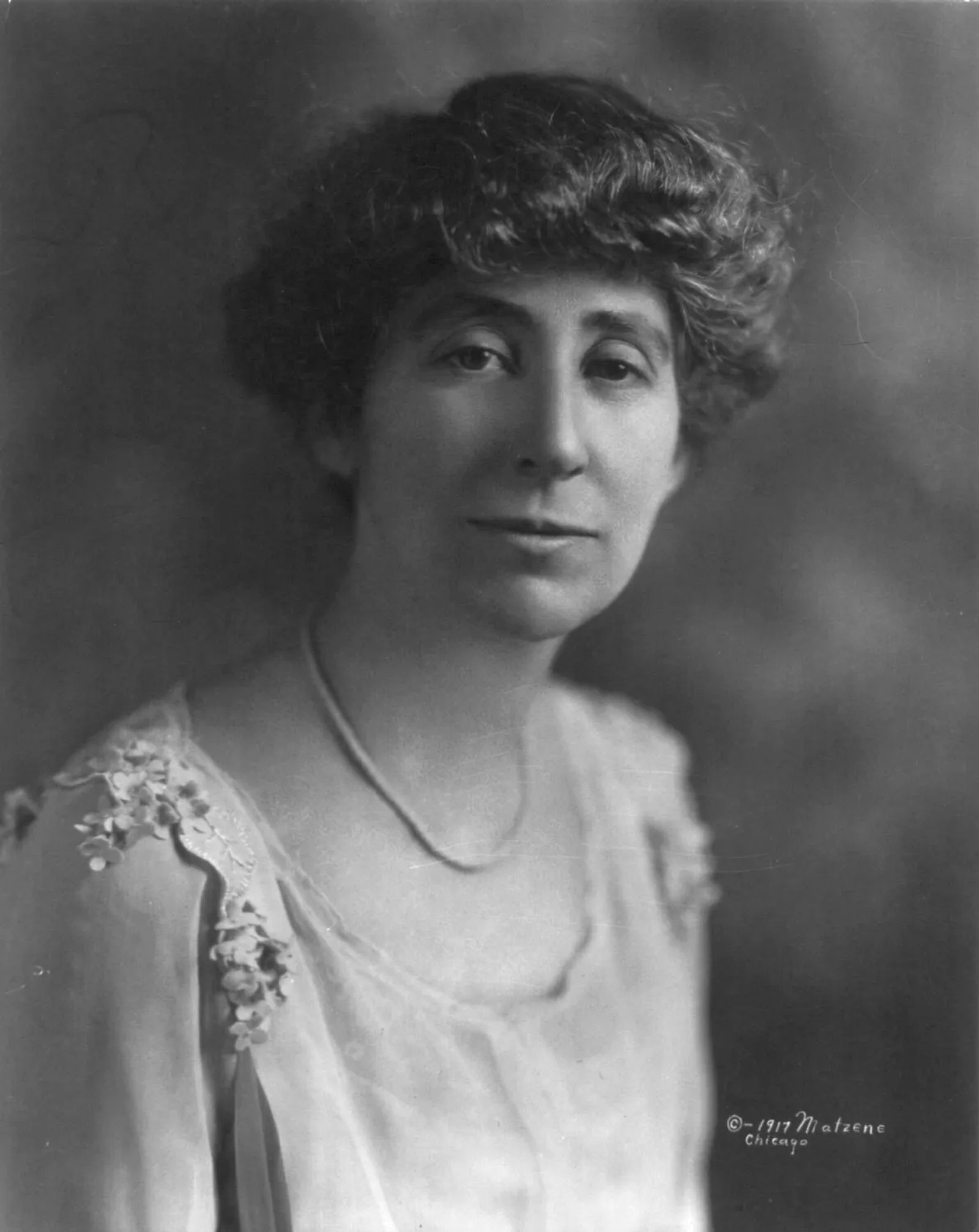 “I may be the first woman to be elected to the U.S. Congress,” said Jeannette Rankin, “but I won’t be the last.” *

Born near Missoula in 1880 and the eldest of seven children, Jeannette Rankin graduated from the University of Montana in 1902. While attending the University of Washington in 1910, suffrage activities became her passion. In 1914, she returned to Montana to take part in the fight.

After her election to the U.S. Congress in 1916, Congresswoman Rankin was called upon to vote for the U.S. entry into World War I. “I love my country,” she said, “but I cannot vote for war. I vote no.” The National American Women’s Suffrage Association urged her to vote differently, claiming her pacifist stance would ruin on-going efforts to ratify the 19th Amendment.  She held firm.

Montana re-elected Miss Rankin to Congress in 1940. In the aftermath of Japan’s invasion of Pearl Harbor, she was again called upon to vote on the issue of war. She was stormed by reporters and pro-war activists after her “no” vote to President Roosevelt’s Declaration of War against Japan. She needed a security escort to return to her office.

In 1968, she led a Washington, D.C. protest march against U.S. involvement in Viet Nam. A life-long pacifist and outspoken advocate for women’s rights, she died in 1973 at age 93. 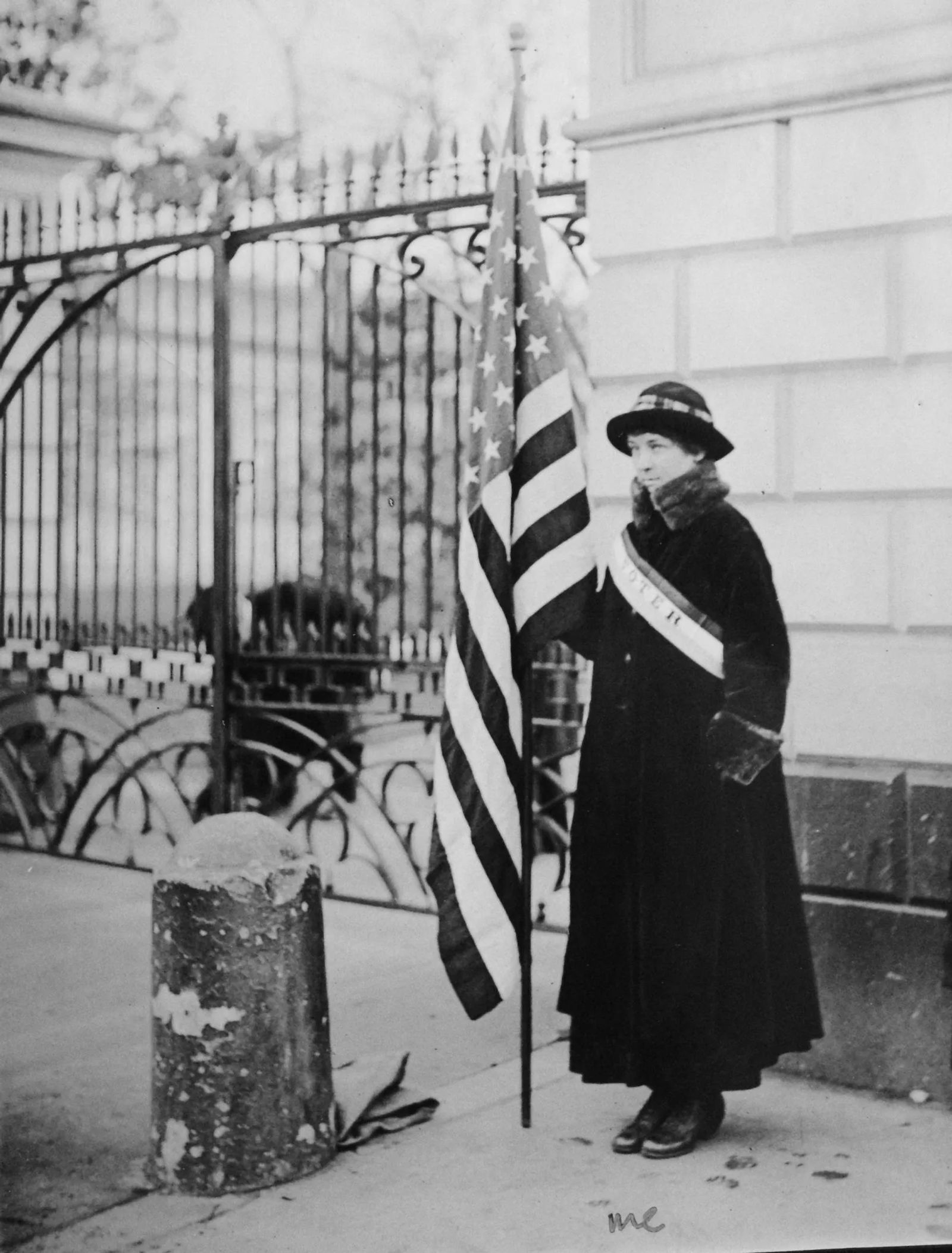 Hazel Hunkins graduated from the only high school in Billings, Montana in 1908. She attended Vassar College and the University of Missouri before joining the national suffrage movement after being denied professional positions because of her gender.

In 1917, as Jeannette Rankin (D-Montana) took her seat in the U.S. Congress, Miss Hunkins and other members of the National Women’s Party were jeered and heckled while keeping constant vigil at the White House to urge adoption of the 19th Amendment. They picketed and chained themselves to the White House fence. Many were jailed, went on hunger strikes and had to be force-fed by authorities.

After ratification of the 19th Amendment, Ms. Hunkins worked as a free-lance writer in London. She married, became Hazel Hunkins Hallinen and had four children. Her commitment to women’s rights was unshakeable. She died in London in 1982 at age 91 and is buried near her husband and parents in Billings’ Mountview Cemetery.

A LOOK AT WOMEN'S SUFFRAGE

1869.  Wyoming gives women the right to vote when it becomes a territory.

November 1916.  Jeannette Rankin (R-Montana) is the first woman elected to the U.S. Congress.

August 26, 1920. The 19th Amendment to the U.S. Constitution is ratified. A woman’s right to vote becomes a constitutional right.

1953.  The League of Women Voters of Billings receives its national charter.