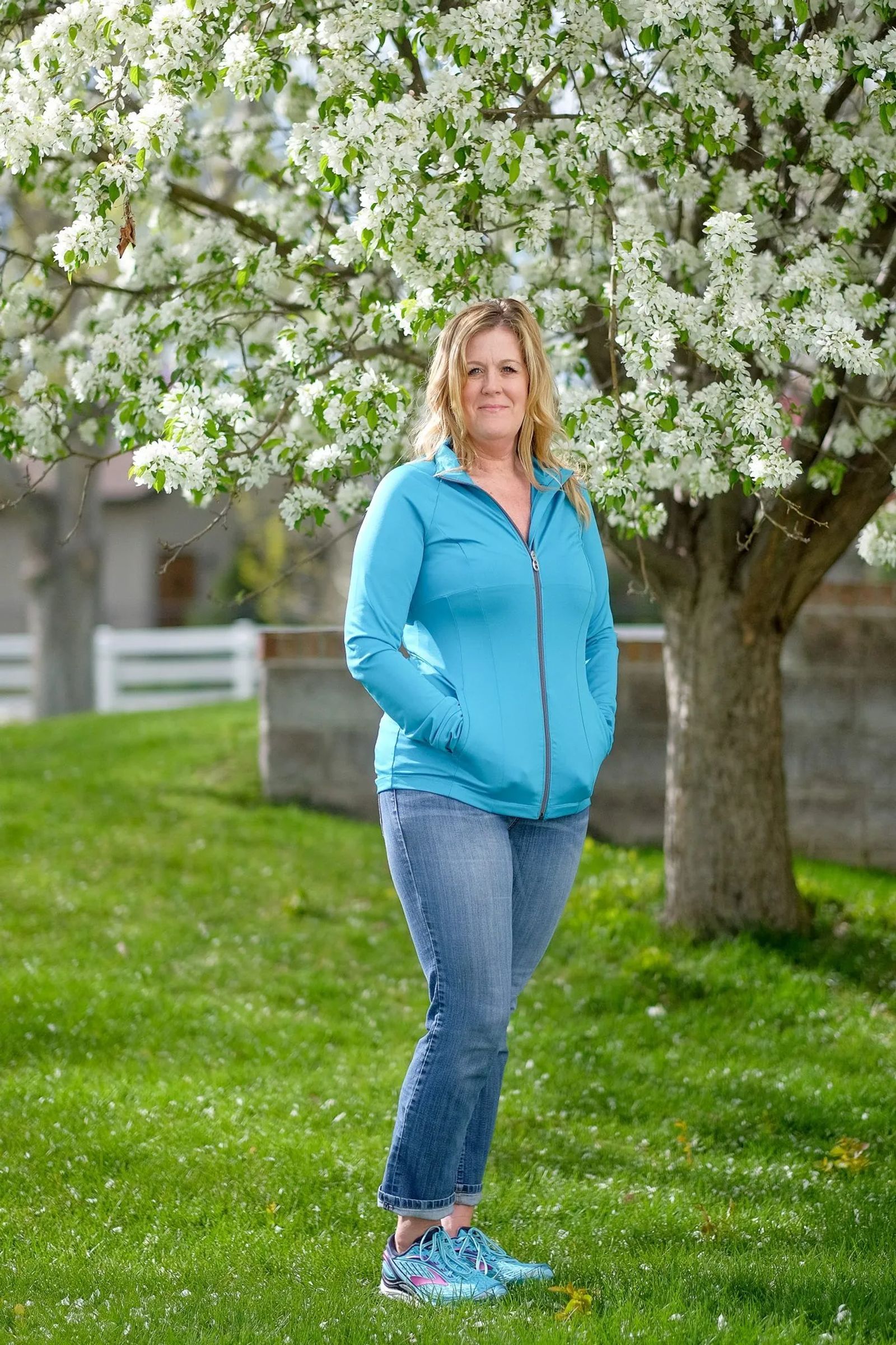 From Sea to Shining Sea

When Denise Lampi-Kok crossed the finish line at Hawaii’s Aloha Series Half-Marathon on the island of Kauai, she wrapped up much more than a 13.1-mile race. With the crowd cheering, electricity in the air and her ‘glam rock hair band’ music pumping through her ear buds, this race capped a decade-long journey, hopscotching across the nation. On January 19th of this year, just three days after her milestone 50th birthday, she ran her 50th half-marathon in the 50th state of the union. She did it with cheers from her family and with her best friend from college by her side. 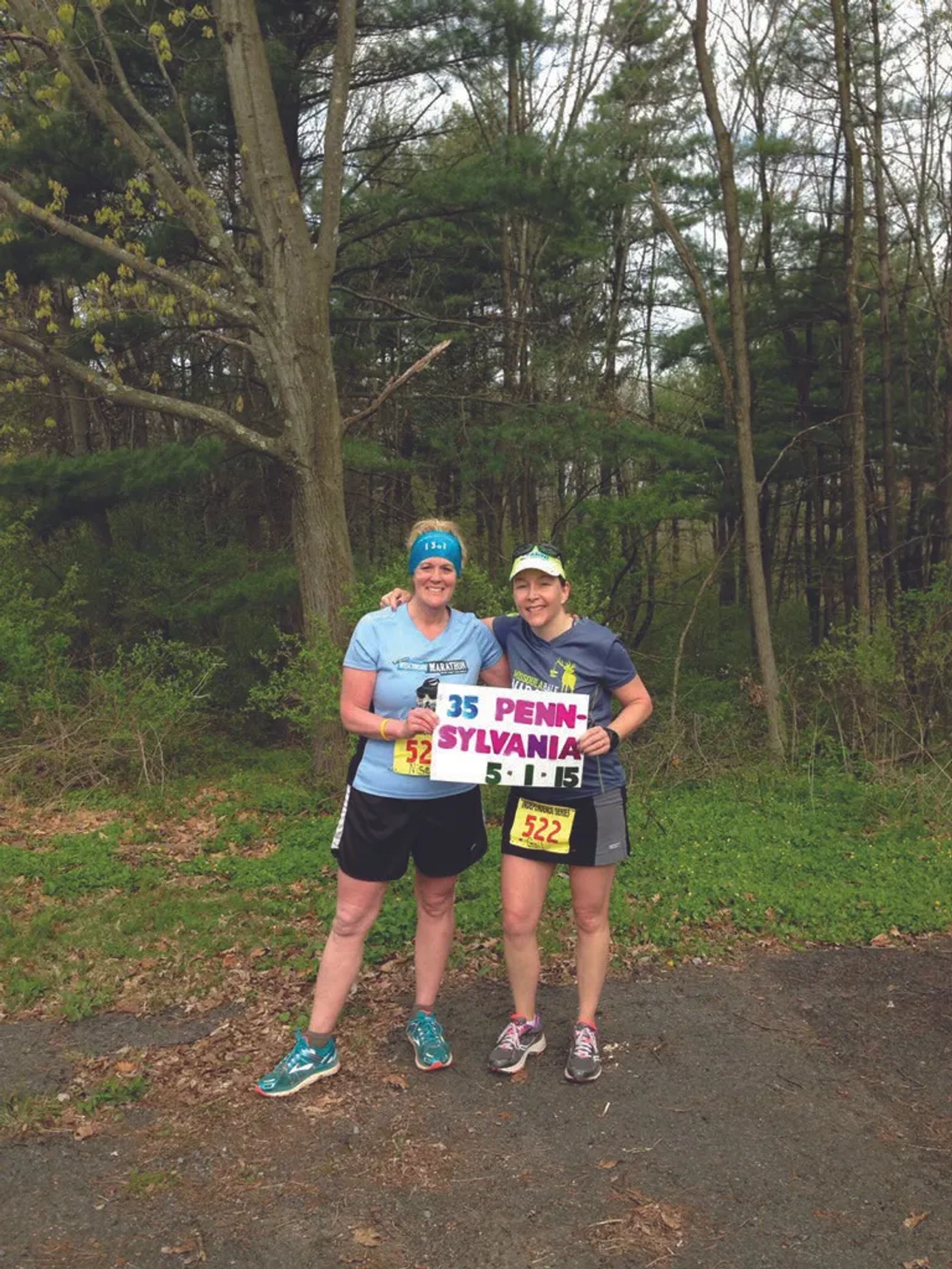 “I wouldn’t go to half of these states if running didn’t take me there!” Denise says today as she points to all of the medals that line the wall next to her treadmill. Some medals are decked out in rhinestones; others are enameled with every color of the rainbow. One was a modest piece of stamped clay, strung with a jute cord and created by the hands of a West Virginian potter.

“Running has been a huge part of my life and I have always had the best support system,” Denise admits. In fact, before Denise hit her teenage years, she took up running with her dad during his quest to get in shape after quitting smoking. The pair put in hundreds if not thousands of miles on the track above the Rocky Mountain College gym together. “The weird thing is that if my dad never smoked, I probably would never be running to keep myself healthy.” Denise’s dad was in the crowd during the Hawaii half-marathon and on that day, was celebrating his 40th anniversary of being smoke-free. “He will be 76,” she says with emotion. “Had he not quit, would he still be here? I don’t know.”

As time went on, Denise moved on to college and tried many times to get her college roommate, Gail Avendano to join her on a run. Gail laughs as she reflects back on those conversations. “I wasn’t a very enthusiastic participant,” she says. “I never really caught the running bug until long after I was out of college.”

The two kept in touch and a little more than ten years ago, Gail called Denise to share the news that she was training for her first half-marathon. Denise laughs when she says, “I said to her, ‘You are going to do a half-marathon?’ She asked me, ‘How do you feel about doing the Rock-n-Roll Half-Marathon in Arizona when you turn 40?’”

The duo ran the race. And, that’s when the dream to hit all fifty states in 10 years was sparked. Denise says, “So, we were sitting after the race at her parent’s house in Arizona on a couple of easy chairs and she said to me, ‘Wouldn’t it be cool to run a half-marathon in every state?’ I was like, ‘Yeah, sure, ha ha.’ And then she said, ‘Let’s get it all done before we turn 50!’” 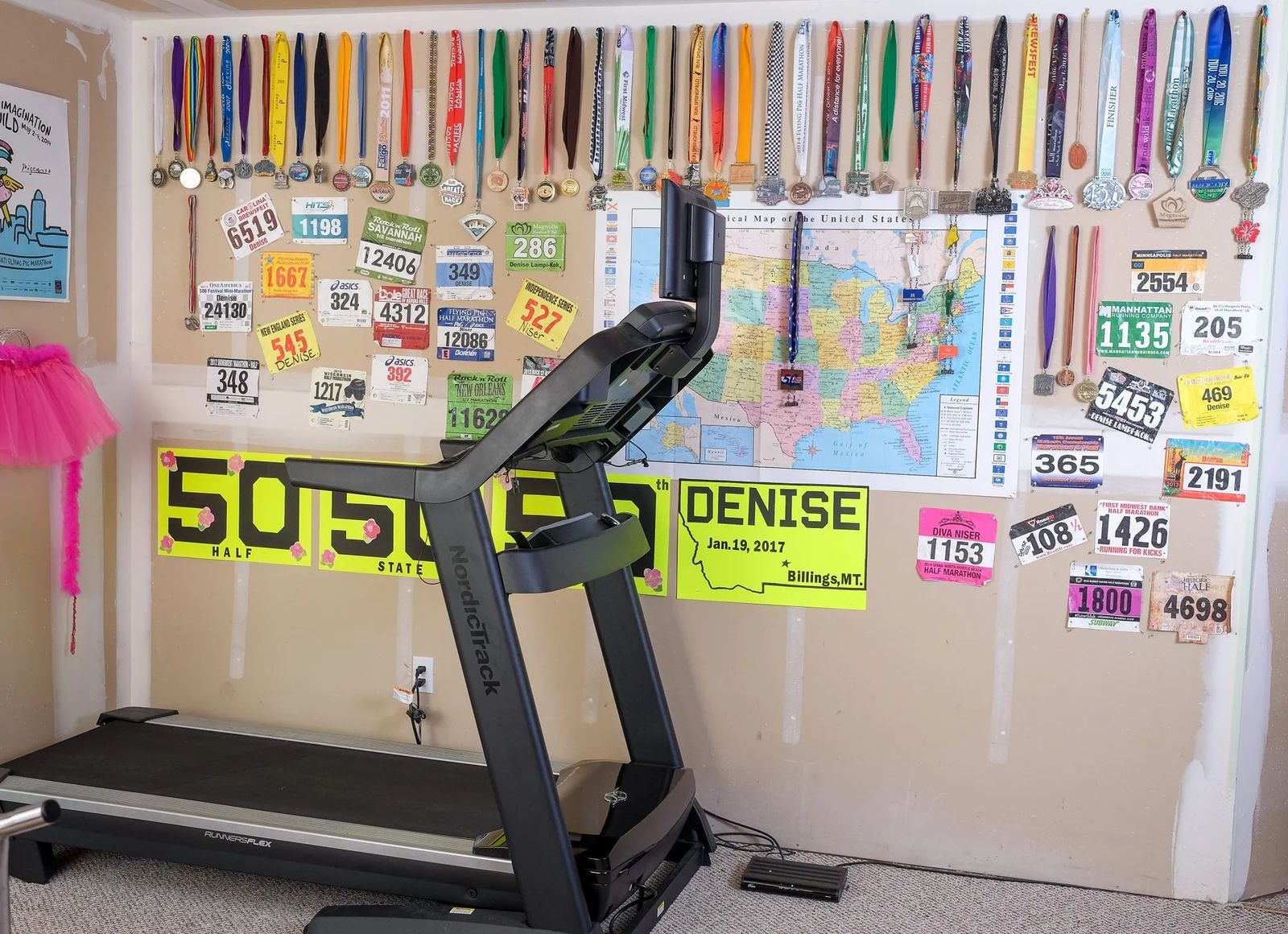 Gail, however, doesn’t remember it quite that way. She chuckles as bit as she says, “I think we have two different memories of that event because I am blaming her for this!” She quickly adds, “Regardless of who said it, it gave us a really good reason to meet up and continue to look forward to having weekends together despite living in two different states.” Denise is in Montana. Gail lives in Utah. “It gave me a chance to spend time with a really close friend,” Gail says.

Over the course of ten years, the two would brave all kinds of weather.

Denise poses with the blanket Gail quilted for her showcasing t-shirts from many of the races the two ran together. [/caption]

“In New Hampshire, it was raining so bad, with severe lightning,” Denise shares. “The race organizers literally came on the course and told us we could stop running if we wanted to. Lightning was right in front of us, trees were falling on the course. It was awful.” About the extremes, Gail says, “We did get to see all the different terrain and because we did it all year round, we experienced every kind of weather that you could imagine.” The two discovered that the south can bring stifling humidity and that a half-marathon in Michigan in March with sleet and cold temperatures probably wasn’t the best idea.

Health issues cropped up on their journey with a few that they feared would take them off their all fifty states half-marathon course. Just a year before her 50th birthday, Denise battled Planter’s Fasciitis and was sidelined from running for six months as she underwent physical therapy. Denise sighs as she says, “I actually thought I wasn’t going to make it!” Just weeks before the Hawaiian half, Gail was diagnosed with a blood clot that took up nearly a third of her right lung. The doctor reluctantly signed off on travel thanks to the anti-coagulants that were flowing through her veins and told her to lightly jog or walk the course and not to run. Gail did just that. 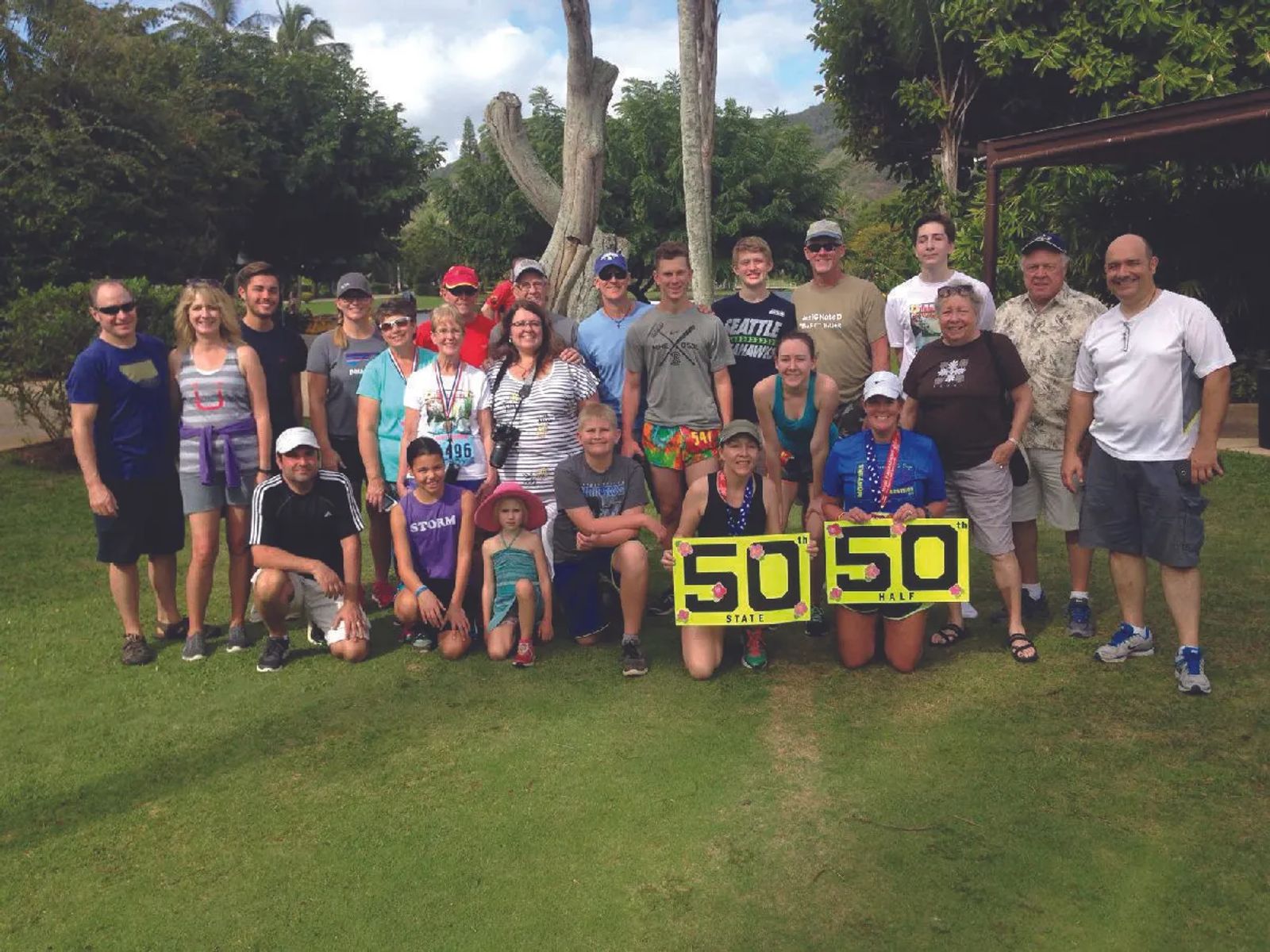 As Denise looks at the pins placed on her map of the nation showcasing each city she visited, don’t ever ask her to pick which city or event was her favorite. Each spot on the map comes with its own special memory. In South Dakota, Denise says, “My mom actually ran her one and only half-marathon with me in 2008!” In Virginia at the Marine Corps Half-Marathon, “That race was very emotional because my husband was a Marine. There was a hill you run up where they had pictures of everyone who had passed away in the military. You literally had to keep running with tears in your eyes,” Denise says pensively. In Myrtle Beach, South Carolina, Denise and Gail ran wearing feather boas, tutus and tiaras for the final half-mile of the Divas Half-Marathon. And in Indianapolis at the One America 500 Festival Mini Marathon, the two joined roughly 35,000 runners on a course which included a two-mile stretch on the Indy 500 track, a “once in a lifetime experience.” 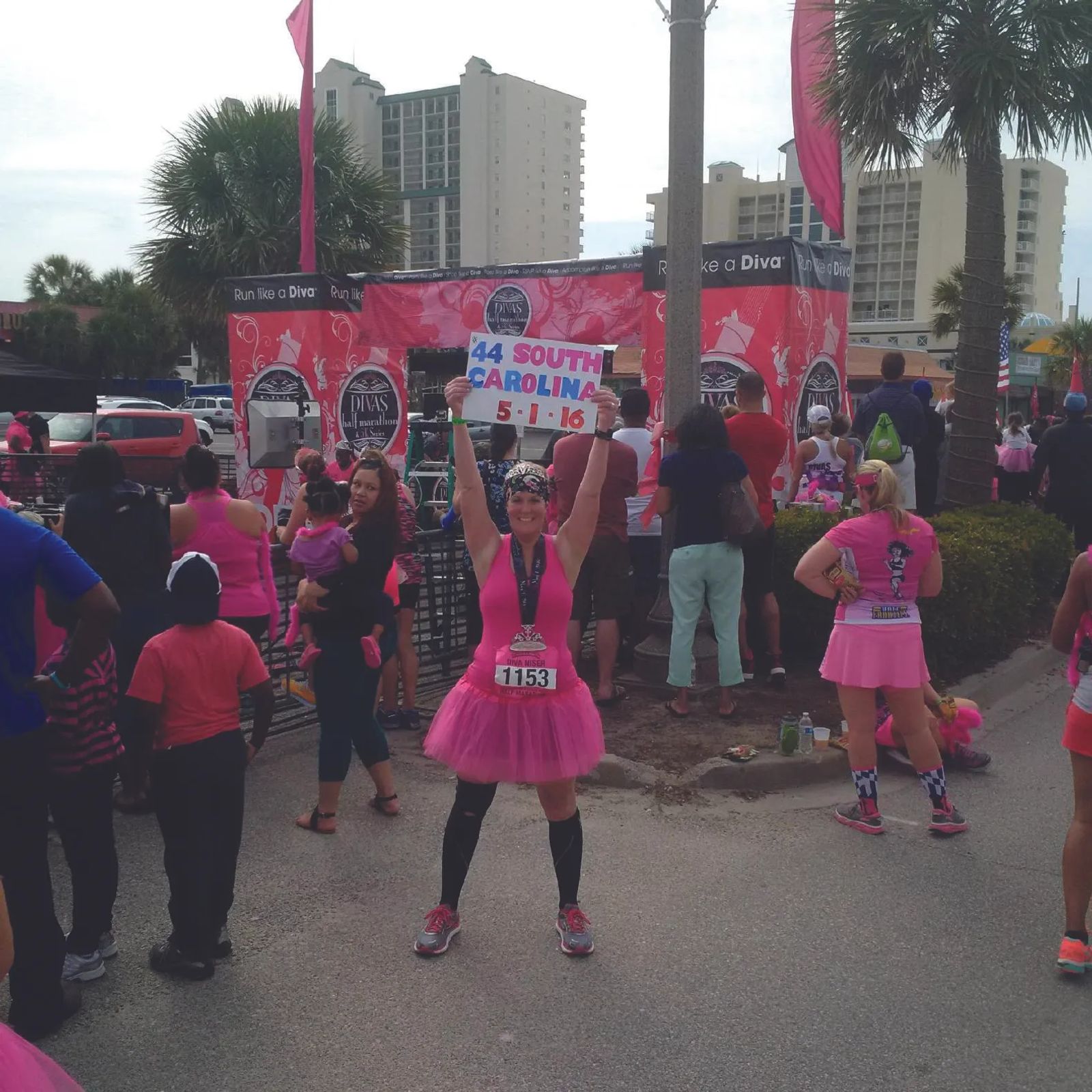 One half-marathon, however, is one Gail, Denise and three of their friends will never forget. At the Rock-n-Roll New Orleans Half-Marathon, each woman donned a race bib with a picture of Sherry Arnold on it. It was the pair’s first race since Arnold, a wife and mother from Sidney, Montana, was murdered on her morning run by two men, high on drugs, who decided to go out and kill someone just for fun. “There were five of us that ran that race together with her on our back,” Denise says. “There was a virtual run where you could print off her picture and use it as your race bib and everyone around the world could run for her,” Denise says. “I continued to do so. She’s been with me much of the way. I didn’t know her personally, but her story really touched my heart.”

By the time the two reached Hawaii, Gail and Denise figured out that they had run 34 out of the 50 states side by side. The two friends became closer, learning a lot about themselves and each other along the way. “Running is really a metaphor for life. Sometimes it is easy. Sometimes it is hard. Certainly, over the course of ten years, we experienced personal tragedies, personal celebrations and yet the running remained constant,” Gail says. Denise discovered her own personal strength firsthand. “I am a lot stronger than I ever thought I was.” She learned how to dig deep and says with a smile, “I am slow, but I finished every single one of those races.”