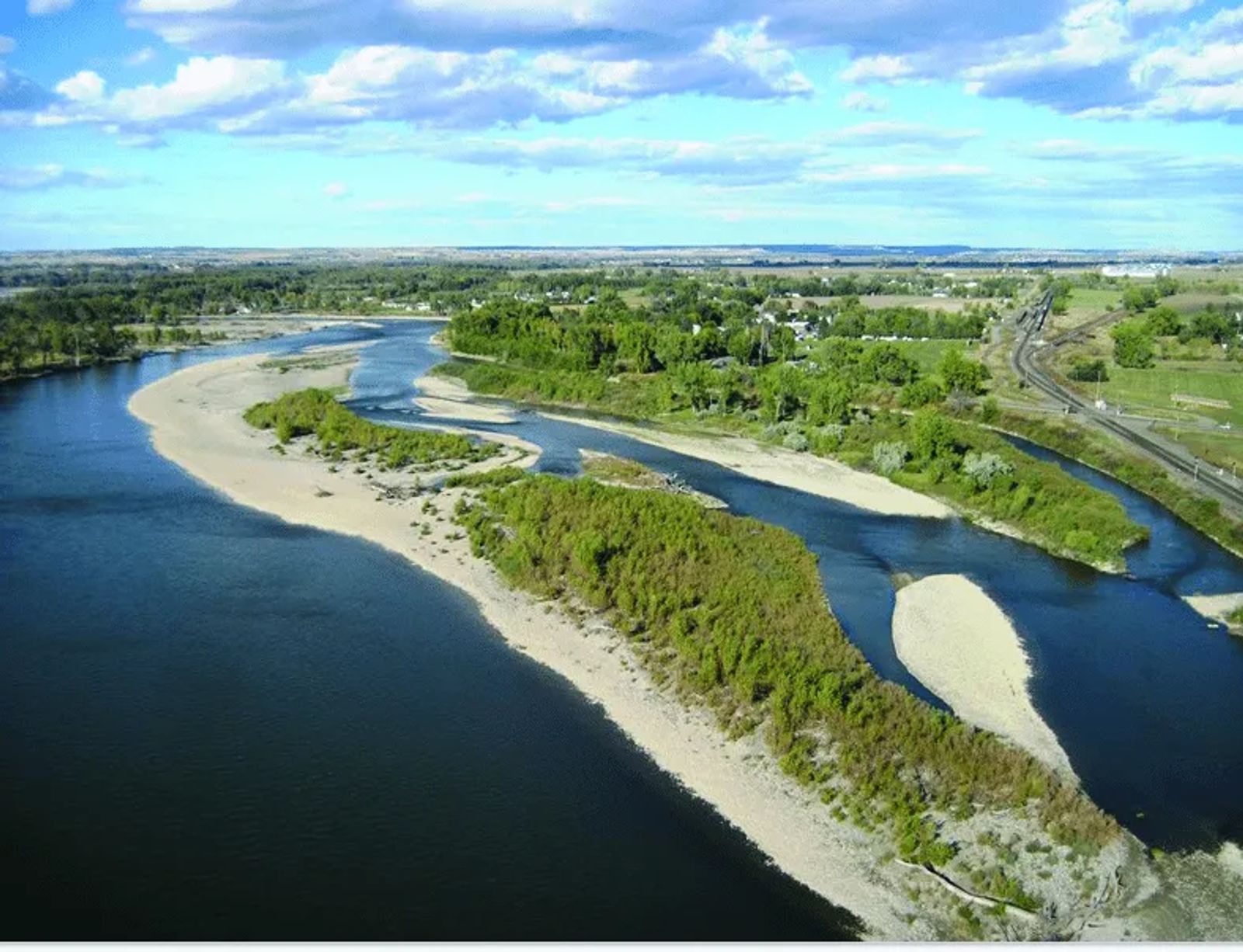 Hanging Out in Huntley

As soon as you take the Huntley exit off Interstate 94, the hay bales offer a clue.

Lined up in neat rows, nearly 900 big round bales mark the entrance to the community of 400-plus. Once you pass through “town,” the mountain of sugar beets – perhaps a block long and maybe 40 feet high – confirms what you already suspected: Huntley is all about agriculture. The town’s ag roots are also evident with the Miller/Coors barley operation and the Southern Agricultural Research Station (SARC) sitting just a few miles to the east.

“The best breakfast is definitely Pryor Creek’s pancakes,” she reports. She says the Express Way, the town’s gas and convenience stop, boasts an unexpectedly broad wine and beer selection. The Blue Cat Bar and Grill makes a darn good pizza and the Cowboys, a restaurant located on the banks of the Yellowstone, is known for its nightly dinner specials.

Even with its charm along the Yellowstone River, many will tell you the heart of Huntley pulses from the people who live here.

“When there’s a need, neighbors just step up and help out,” says Jim Knapp, a long-time resident and retired shop teacher. “You’ll see how compassionate the people are to each other.”

And then there’s the passion for their beloved Huntley Project Red Devils. This fall the town turned out to cheer on the high school’s football and volleyball teams, which both took second place at state.

“Part of what makes Huntley great is we have a great school system and people want to live here because of it,” says Becky Robison, who co-owns two of Huntley’s anchor businesses, R&R Trading and R&R Hardware and Feed. The former is a boutique shop that draws quite the clientele from Billings. They come for the eye-catching inventory that ranges from trendy tunics and sparkly dresses to antique glassware and linens. The hardware store, on the other hand, caters almost exclusively to locals – many of them hobby famers – who stop in for feed, parts and maybe even a few baby chicks. 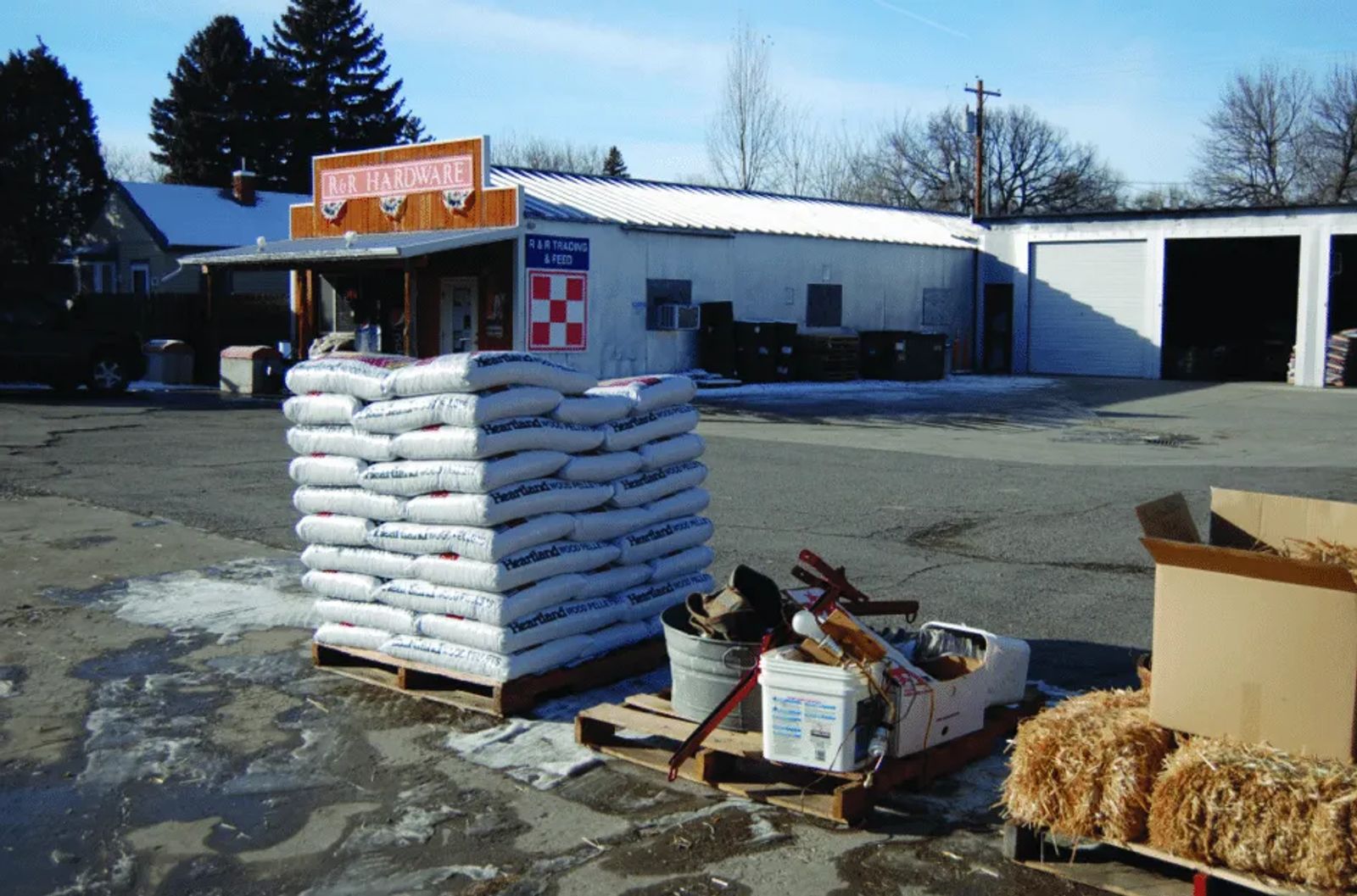 One year, due to a mix-up at the supplier, R&R Hardware received a double order.

“You walk into the post office and hear all this chirping,” Robison says. “That year I thought we’d be butchering chickens before we got them all sold.”

Beyond Huntley’s small-town charms, “the Project” makes Huntley unique. Huntley Irrigation Project refers to an expansive 35,000 acre Bureau of Reclamation irrigation project that stretches from Huntley as far east as Pompeys Pillar. Built more than a century ago with horse-drawn slips, it relied then as it does today, on gravity-fed ditches originating from a head gate on the Yellowstone River just upstream. The project bore the name of Huntley because it was the only established town at the time it was built. 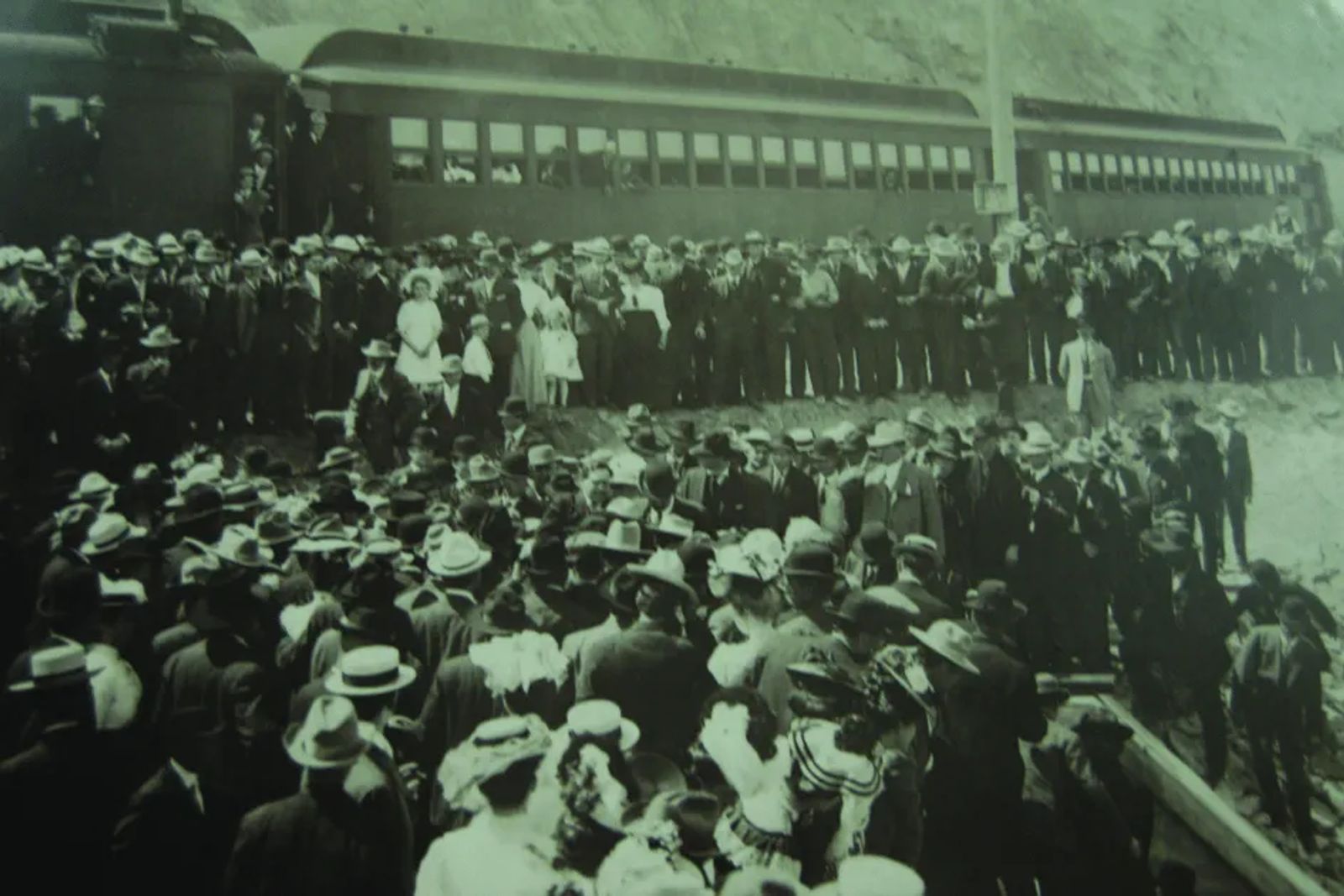 Hundreds, if not thousands, flocked to the area to witness the opening of the headgate on June 26, 1907. In short order, the irrigation project transformed the dry, sagebrush-riddled flatlands along the Yellowstone River into vibrant, productive croplands. Over time, as the fields yielded bounties of sugar beets, alfalfa, corn and grains, the people who lived within the boundaries of Huntley Project grew common bonds.

Today, the towns within “the Project” — Huntley, Worden, Ballantine and Pompeys Pillar — seem to consider themselves part of something more than just isolated stops along Highway 312. They share a common purpose along with one high school, one middle school and one elementary school, all located centrally in Worden.

Even today, when locals are asked about Huntley, they’re apt to respond with a question of their own. “Are you talking about Huntley or Huntley Project?” they’ll ask.

Robison tells how travelers have pulled up to her store in Huntley, saying they can’t find the school (because it’s in Worden). “And one time someone asked my son if Huntley Project was a housing project,” she says smiling.

The actual “town” of Huntley consists of a few blocks of homes sandwiched between Highway 312 and the Yellowstone River, with a few newer developments dotting the fringe. Many of the lots are generous in size, with enough room for some chickens, a horse or two and maybe some goats. Since the community’s not incorporated, there’s no city council nor is there local law enforcement. Though dwarfed by the city of Billings, Huntley serves as headquarters for the Yellowstone County News. 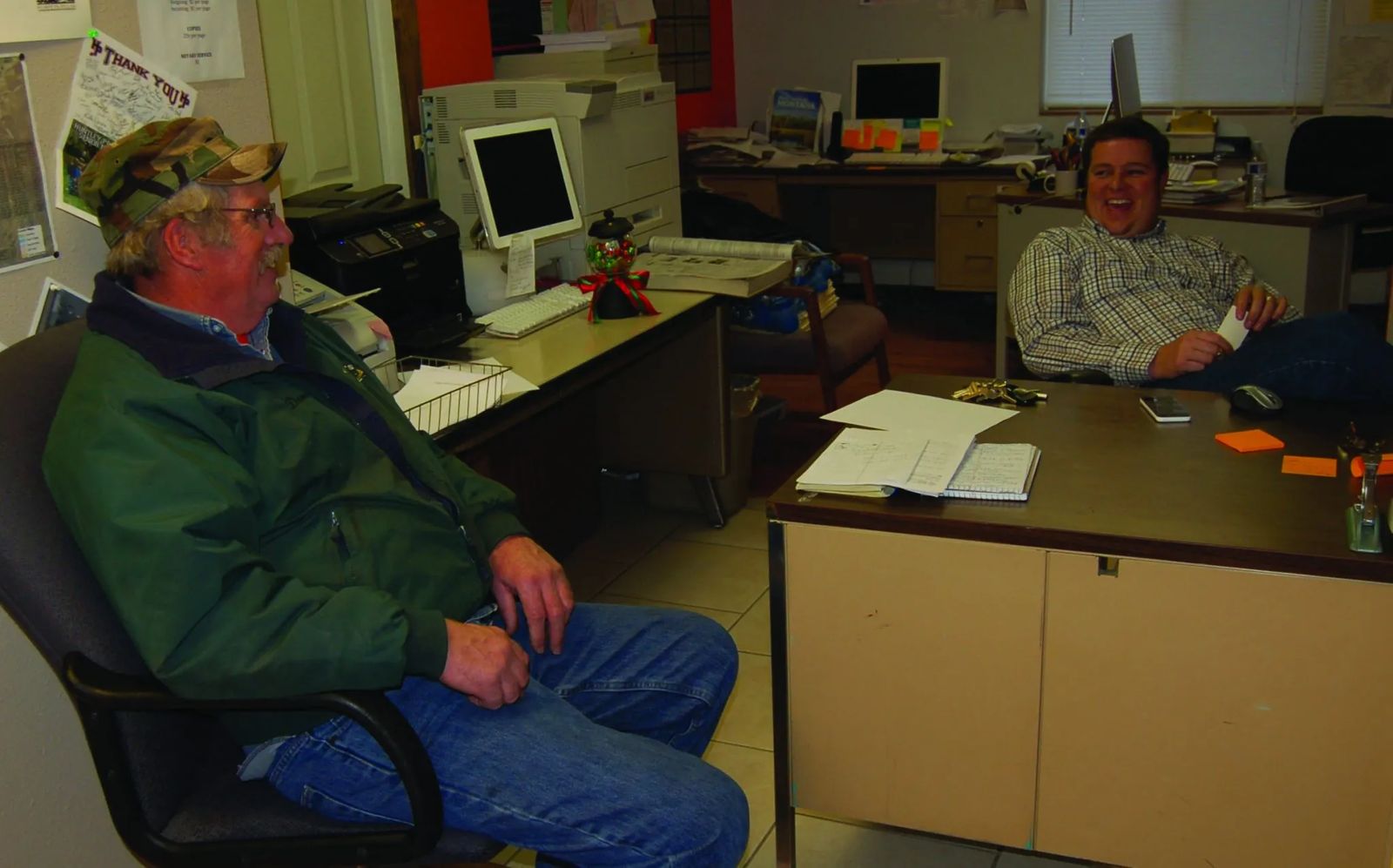 Robison owned the local weekly for two decades before selling it to Jonathan McNiven last year. As reporter, editor, photographer and publisher, McNiven does his best to cover newsworthy events throughout the area. One of his early stories, complete with photos, recounts the shooting last fall of the largest black bear ever taken in the state of Montana weighing a whopping 610 pounds.

“It must have been corn fed,” McNiven says with a grin.

McNiven represents one faction of Huntley’s demographics. He’s the hometown boy who’s come back with a young family in tow.

“I was gone for eight years,” says the 1997 graduate of Huntley Project High School. “I came back to help my parents with their business. I never thought we’d end up back in Montana.”

Since returning in 2009, McNiven was elected to the state legislature and launched community websites for Huntley, Shepherd and Lockwood. Now he’s directing his energy to the News and it seems to be paying off.

“We actually are looking at printing more papers at the beginning of the year,” he says, grinning.

If McNiven represents “the hometown-boy-returns,” Dave Hancoop represents the “new face” in town. A transplant from Washington State, Hancoop moved into one of Huntley’s newer subdivisions a few years ago. He was drawn to Montana because his son had moved to Billings. He was drawn to Huntley because he could get more real estate bang for his buck.

“The coldest I ever saw before I moved here was 4 degrees,” he says. “We sat in the hot tub here and it was 21 below!”

Like Hancoop, those who make their home in Huntley tend to share an affinity for life outside the fast lane, even though it’s only a 15-minute drive to the outskirts of Billings.

For some, Huntley is considered a bedroom community to Billings. And, morning traffic can attest to that, locals say. A few others, like two hardy golfers from Billings, make the reverse commute. As snow blanketed the fairways in December, the golfers had driven out to the Pryor Creek clubhouse to sip coffee and swap stories with buddy Hershel Crab.

“We may just be playing by Friday,” they joke. 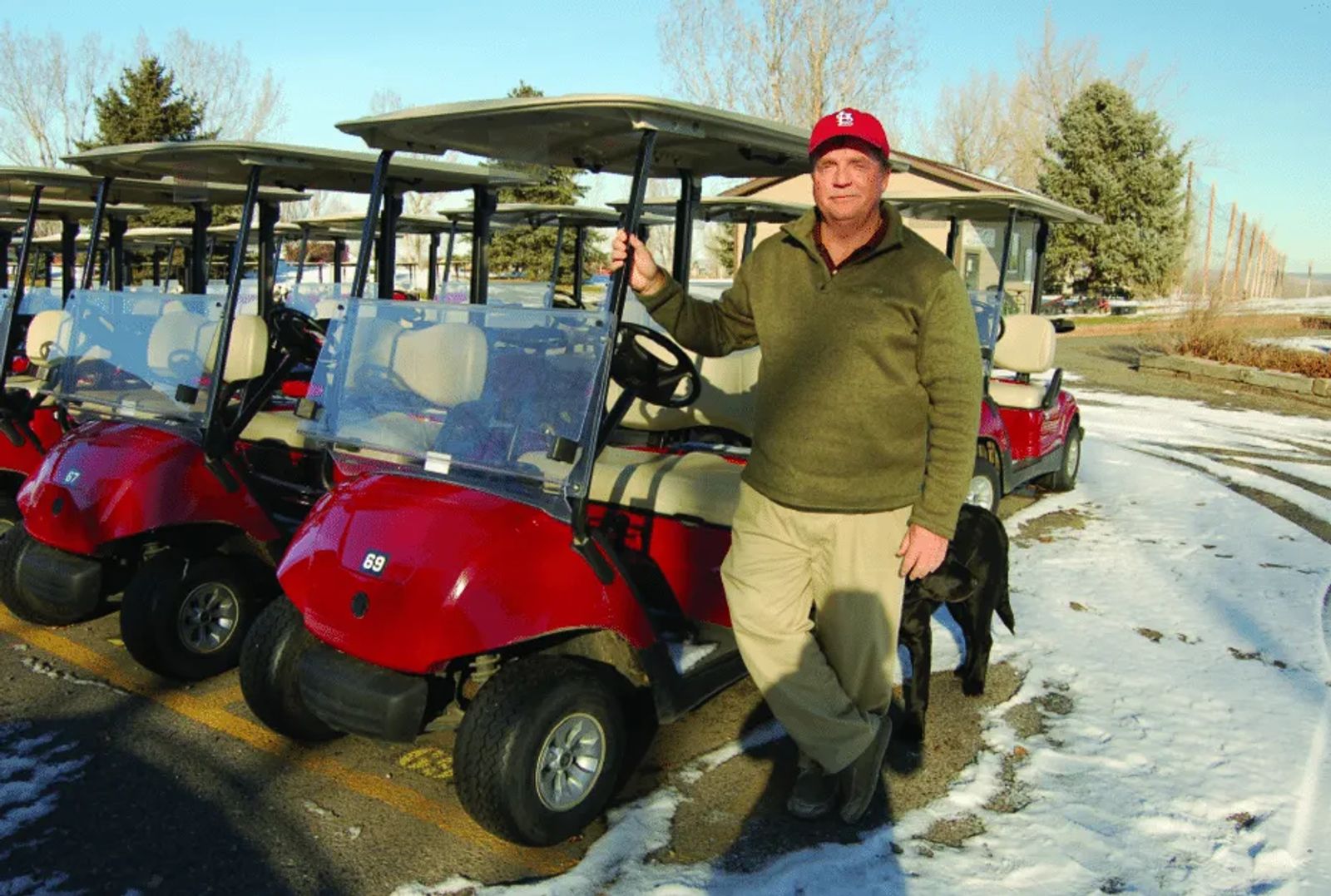 Joe Link, owner of the Pryor Creek Golf Course, which sits just off the Huntley exit on Interstate 94 depends on Billings' golfers to make the trek to his course. The land now cultivated into fairways and greens was once part of a 15,000-acre holding that belonged to his grandfather. When the Great Depression forced his grandfather to sell, the family was left with the 1,500 acres along Pryor Creek that makes up the golf course today. In the 1970s, when Link’s father, Billings architect Elmer Link, proposed the development, opponents were vocal.

“It got pretty rugged for a while,” Joe Link says.

But in the 35 years since, homes have been built on 120 of the 140 lots and the golf course is considered a major component in what makes Huntley work. “It’s great now,” Link says. “And it’s got to be good for the businesses downtown.”

July’s Homesteader Days are a big deal and the money raised goes to community projects, says McNiven. “It’s just a tradition that goes a long ways in this town.”

Down the road, the Huntley Project Museum of Irrigated Agriculture hosts the annual Threshing Bee in August. Gay Kepple, project coordinator at the museum, says the bee offers a weekend of activities that harken back to earlier days. 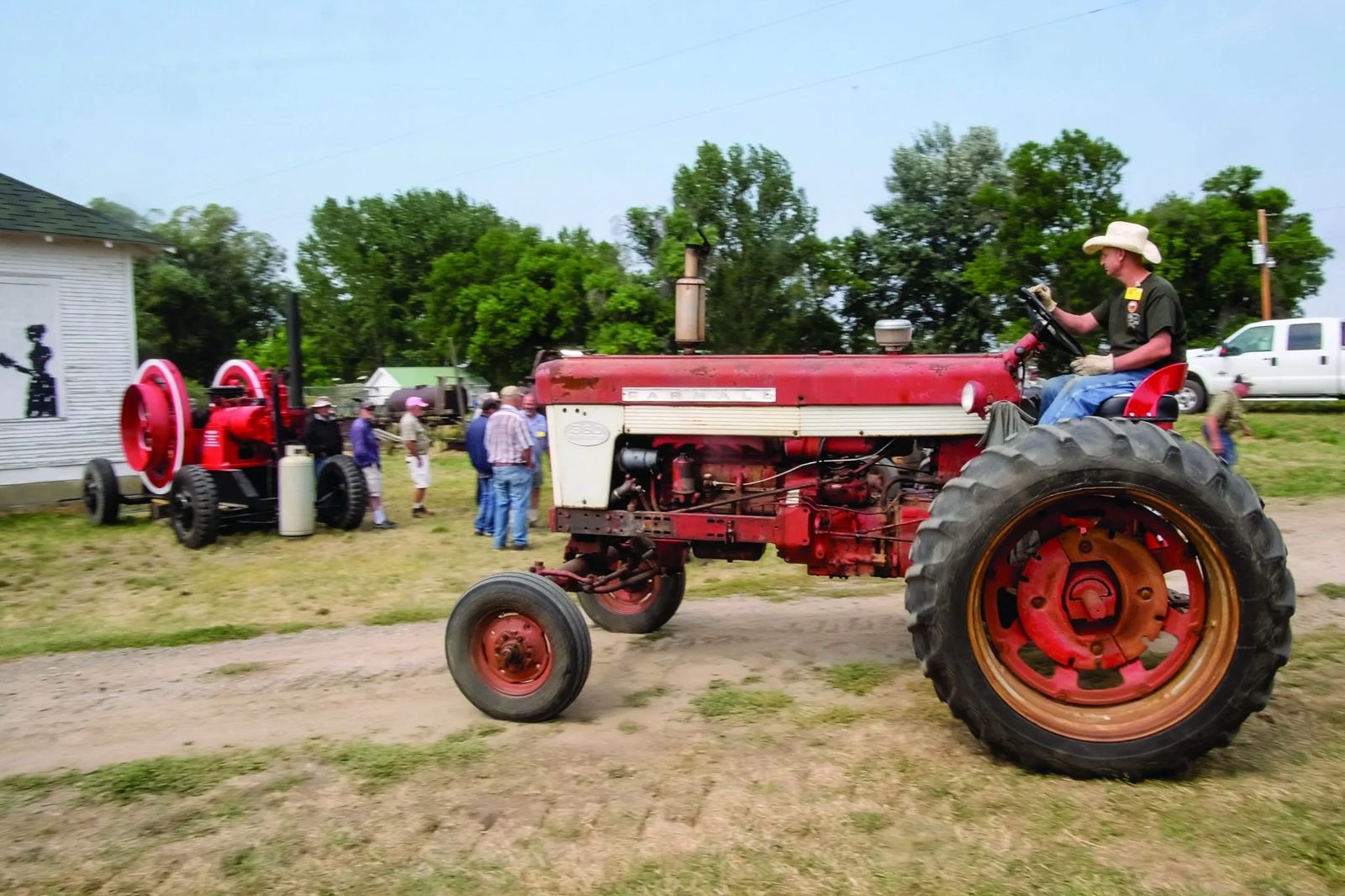 Every Thursday evening from June until the snow flies, locals gather at Barkemeyer Park — across from R&R Trading — for farmers’ market.

“It turns this town into a frenzied place, especially when the sweet corn comes in,” Robison says.

The park itself is a source of local pride. Steve and Stacy Erb have been the park's self-appointed caretakers for years. In the early morning hours during the summer, Steve is moving water pipe and picking up garbage, ensuring the park stays green. Stacy does the mowing and the maintenance costs are covered by a once-a-year park auction held the third weekend in June.

Pam Gabel, owner of the Blue Cat Bar and Grill, was instrumental in raising money for the park’s colorful new playground equipment.

“I made that my mission,” she says. “I wrote my first grant for that.”

Gabel also worked closely with Dennis Tryan (father of the world-famous, team roping Tryan brothers) to organize weekly roping events directly across from the Blue Cat. They start in May and run every Friday evening until the sugar beets come in. That’s when the harvest turns the vacant lot into a sugar beet mountain and there’s no longer room for rigs and trailers, she explains smiling. 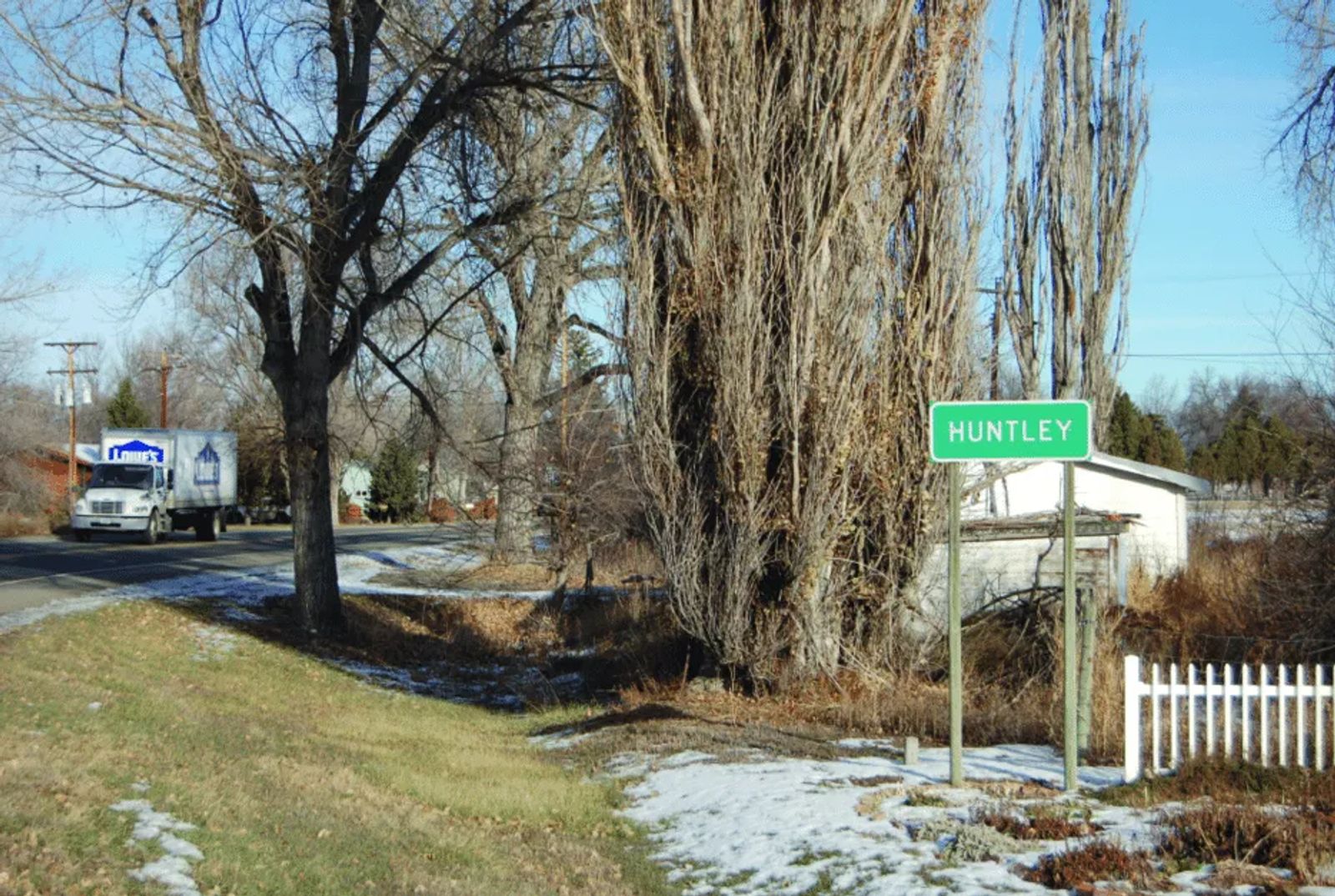 Like any small town, Huntley boasts its share of characters. Some of them are the “regulars” that sit out front of the Express Way every day, come rain or shine. Agnes Yurian, who works there, shakes her head when she speaks of them.

“They come for coffee,” she says. “It can be 10 below and they’re out there. They sit out there and freeze and torture each other.”

Locals also speak of the late Charles Banderob. Not only was he known as the area historian, but he wasn’t shy about expressing his opinions through regular letters to the editor. Becky Robison chuckles when she remembers him.

“He was 96 years old and he bought a two-year subscription to the paper,” she recalls.

Further back in time, around the late 1940s, there was Earl Mead. Crippled in a bad accident on his honeymoon, Mead was a character who became known as the “mayor” of Huntley. In that unofficial capacity, he appointed Bob Hope as the town’s honorary dog catcher. After Hope responded by sending Mead a signed photograph of himself, the lark snowballed. Celebrities of the day – from Duke Ellington to Dorothy Lamour to Arthur Godfrey – all sought to be recognized likewise. Mead’s “fame” lived on through the 1970s, when he received a personal invitation to attend President Jimmy Carter’s inauguration.

As old-timers know and newcomers soon discover, Huntley is more than the sum of its parts. Its colorful characters, special places and quirky history make for good stories. But its agricultural roots and the bonds it shares with its sister communities combine for the community’s unique spirit.

“It’s the quintessential small town with a great atmosphere and charm of its own,” Robison says. “It doesn’t have a mountain like Red Lodge. It’s farming. It’s hobby farming. It’s the Project.”

Did You Know?
Facts about Huntley’s Humble Beginnings

In 1883, the chief forms of entertainment in the Huntley area were spitting contests and horse racing – that’s according to an article written in 1982 by Marcia Krings.

The area was traversed by Capt. William Clark and his men, along with Sacajawea, on their return trip of the Lewis & Clark expedition in 1806.

The town traces its name to S.O. Huntley, a partner in a stage operation located across the river and a mile or two west of the present-day community.

It was settled predominantly by German immigrants, many who came out of Russia.

The town was established at the head of the navigable stretch of the Yellowstone River, as far upstream as the steamboat the Josephine could muster on June 6, 1875.

By 1880, the census reported 37 residents. By 1882, the Northern Pacific Railroad connected Huntley to the ‘new city’ of Billings.