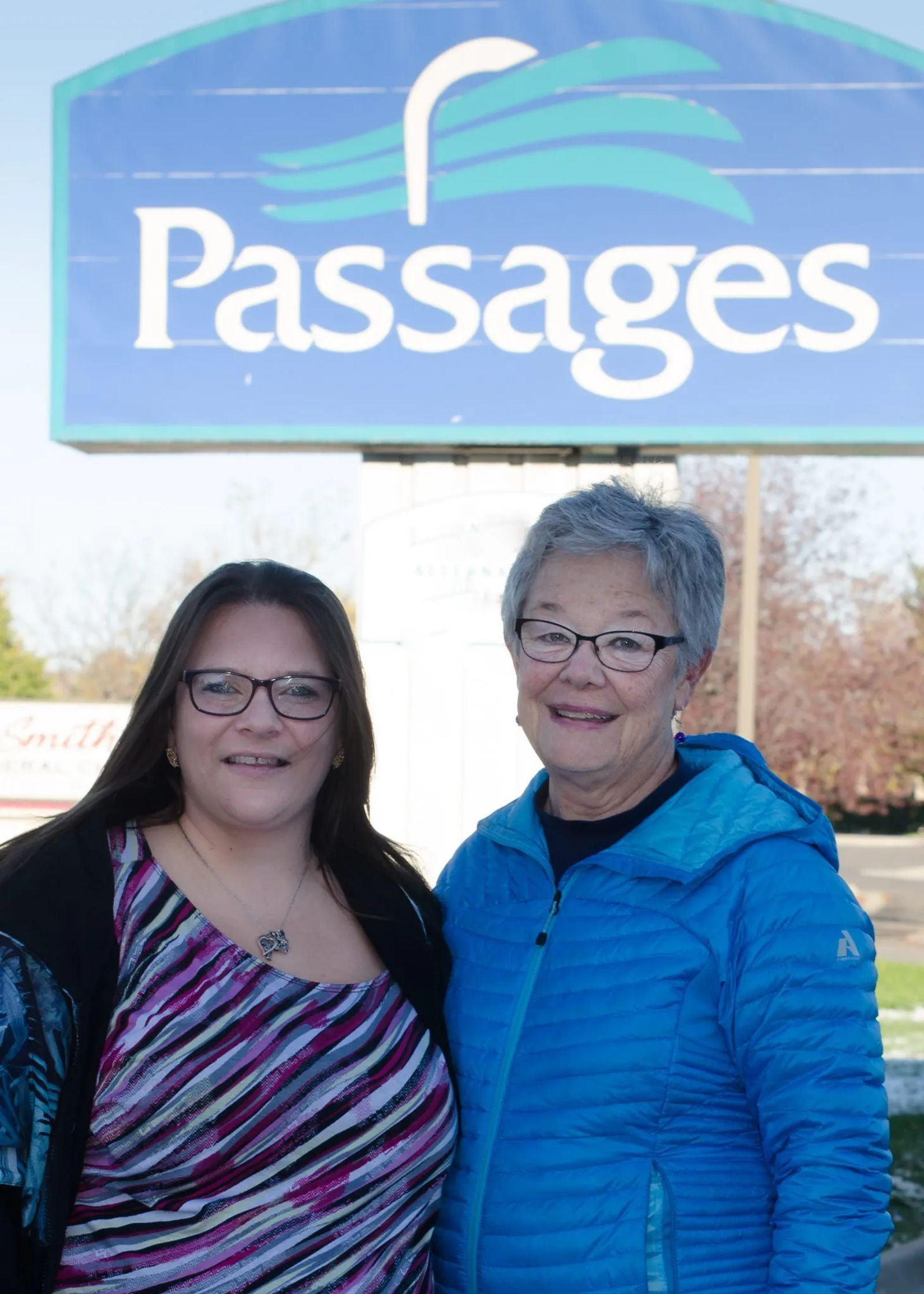 Holly Knight grew up in a world of abuse and drugs that many cannot even imagine. Exposed to the drug culture at a young age, she began using at 12 years old.  “I have lived a rough life in the drug world,” Holly says. "I have been abused. I have been an abuser. I gave up motherhood of my three children for drugs."  Two felony drug possession charges led to her incarceration. But now at almost 30 years old, Holly is at a crossroads in life. She is moving into a place of her own for the first time. “I have never lived independently," she says. "I have always lived with a man, my parents or been incarcerated.”

Passages, the local pre-release program she is graduating from, knows all too well the challenges Holly faces as she walks into her new life. Recidivism, a person’s relapse into criminal behavior, is at a national average of 76.6%. While Montana’s average is lower than the nation, combatting it is still an arduous task. Those who walk out of prison or pre-release struggle to find a steady income. They fight their addictions. And women, like Holly, have an especially difficult time avoiding the toxic relationships and choices that led them to incarceration in the first place.

The experts know that one of the strongest factors in fighting recidivism is building relationships. Those inmates who are able to make healthy ties in a community are less likely to be booked back into the correctional system. Holly admits that type of relationship was few and far between in her life. She just grew up thinking that every family was like hers, immersed in drugs and abuse. However, thanks to a local women’s service group called Zonta, Holly was thrown a lifeline. The program offered a mentor and friend in Becky Wiehe, who just happened to be the woman who started this program within the service group.

It was a successful match.

The two talked quite a bit. They studied together and Becky helped Holly run errands. Becky went around town, helping Holly find an apartment of her own. Thanks to the gains she’s made, Holly has transitional custody of her youngest child. "I'm trying to grow up and be successful in my world,” she says with pride. Even though she was initially hesitant to commit, Holly says, "I'm super stoked about Becky. I can call and tell her anything and she just lets me be me.” Perhaps the most inspirational statement Holly shared was this: “My kids will know better of me some day.” 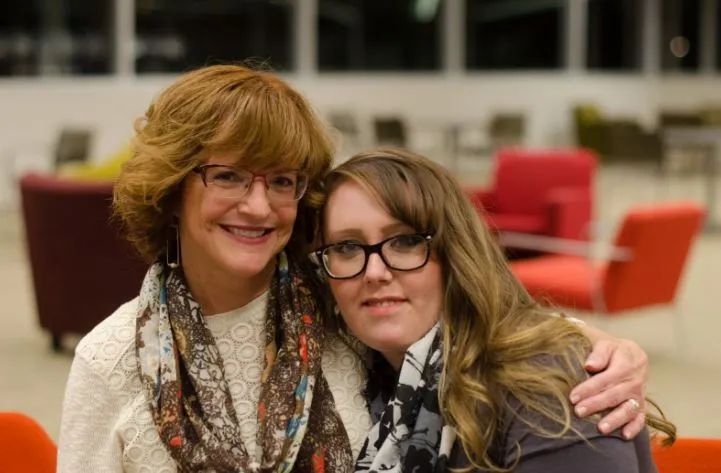 "I wanted to connect with some other professional, educated women who wanted to give back,” says another mentor, Janet Rivera Sharon, who says she joined Zonta because “It is empowering to be around these women." However, no project has been more meaningful to her than the mentoring program. When presented with the proposal she thought, "Wow, this is where I could really make a difference." Even though she admittedly had no first-hand experience with addiction, domestic violence or incarceration and was intimidated by it, she has no regrets for jumping in.

Janet's mentee, Christina Dunn loves the fact that Janet took a leap of faith. "I don't know anybody in Billings. I have no strong ties with healthy people and I thought this would be a good way to find some. In my head, everybody comes from a twisted background. Sometimes I think real families and healthy people don't exist. But Janet is helping me see that they do." Christina comes from an alcoholic, drug-addicted family. She started using meth when she was just 12 years old and then began using "everything else” along the way. Because she chose to use drugs to cope with her emotions, she ended up with two felony possession charges and hasn't been on the streets in three years. She says, "Mentorship has helped me to trust again." To Janet, she says, "It means a lot that you would come in here (Passages) and not look down on me or any of the people here." A beautiful, well-spoken, poised lady, Christina wants to be a cosmetologist. She’s looking forward to the next chapter in life. 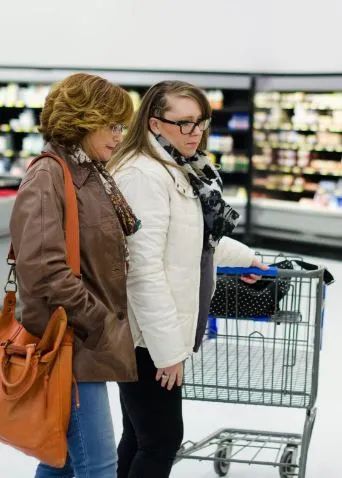 In her personal address of gratitude to the Zontians (Zonta members) Jan Beggar, Chief Operating Officer of Alternatives, Inc./Passages director said, “This is the most successful mentoring partnership Passages has ever seen.  You are the kind of women we want our women to be with. You are kind, smart, non-judgmental and excellent role models. Thank you.” Having just wrapped up their first session of mentorship, Zonta is excited to embark on its second.

An international service club representing 66 countries, Zonta has a membership locally that is about 50 women strong.  Its members represent an impressive array of professional careers from legal and property management to finance, the arts and education. Each woman is dedicated to Zonta's mission of "the advancement of women through education, economic stability, legal and legislative equality, health and wellness, both locally and worldwide."

Since its inception in 1950, the club has made a quiet, consistent and significant impact in this community. During this past year alone, Zontians have raised money for grants to Family Services, Girls State, Friendship House, Passages, the High Plains Book Festival, Rocky Mountain College, Montana State University Billings, and RiverStone Health among others. They also host a monthly "Artful Women" gathering at the library where a guest artist presents their artwork and fields questions about their content, journey, and the process of their passion. 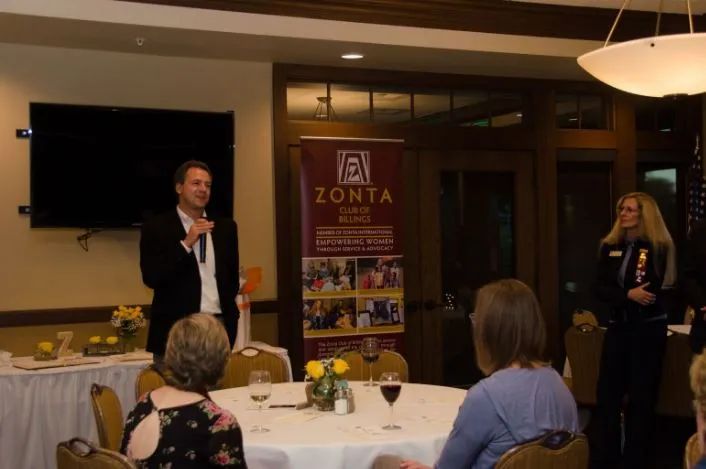 If you ask its members, Zonta's future in Billings is exciting. Local attorney Renee Coppock, a partner at Crowley Fleck, was recently elected as Governor of the Zonta District 12, which encompasses all clubs within Colorado, Montana, South Dakota, and Wyoming. She’s the first governor to come from Montana in the last 42 years. In addition to her work and busy family life, she is also the President of the Montana Women's Run. Governor Steve Bullock, after recognizing Renee's newly appointed role and her advocacy work for women, referred to Renee as "the real governor".

With important work building up women in and around Billings, Zonta Club President Debbie Sundberg hopes others join this service-focused powerhouse. With passion, she says, “If you find your life mission and goals align with ours in promoting women and women’s issues, then we welcome you to join us!” 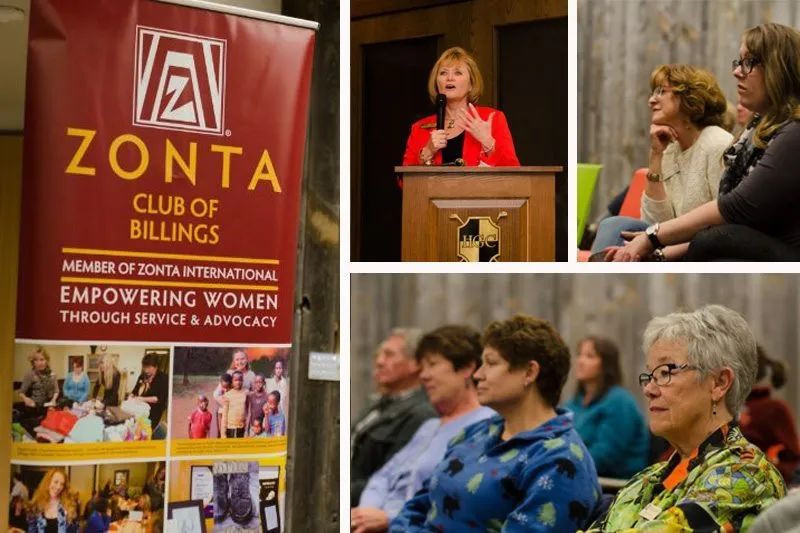 Zonta International is a leading global organization of professionals empowering women worldwide through service and advocacy. Zonta International envisions a world in which women's rights are recognized as human rights and every woman is able to achieve her full potential. Established in 1923, Zonta made its way to the Magic City in 1950. Currently, there are 30,000 members internationally, representing 66 countries. Last year alone, Zonta members (Zontians) raised more than 11 million dollars to fund projects of advocacy and empowerment for women worldwide. To find out more go to www.billingszonta.org.