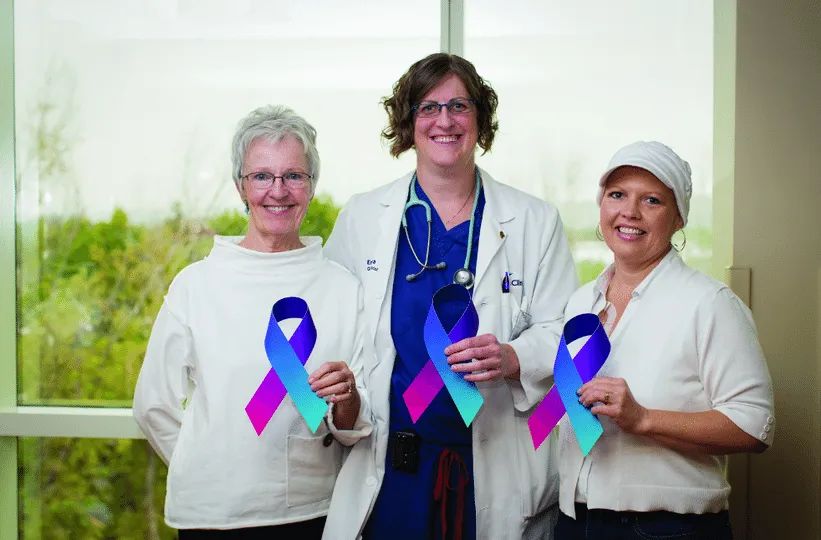 "Pink" isn’t the only Cancer that Affects Women

The image of a pink ribbon speaks volumes. It’s a symbol requiring no explanation. We know the ribbon’s swirl of pink represents breast cancer. But looking beyond pink, what do we know about another group of cancers targeting women?

This specific group of cancers called gynecologic cancers affects women’s reproductive organs. The American Cancer Society estimates that nearly 100,000 women will be diagnosed with a gynecologic cancer in 2015. The universal color for this ruthless band, consisting of five major cancers: cervical, ovarian, uterine/endometrial, vaginal, and vulvar, is not pink, but purple.

Let’s look beyond pink into a few of them. More than 30% of women diagnosed with a gynecologic cancer die each year, making it twice as fatal as breast cancer.  These cancers may be ones we should fear the most but may know the least about. That’s why two dynamic ladies are sharing their personal stories about how they are fighting back against these sinister diseases. 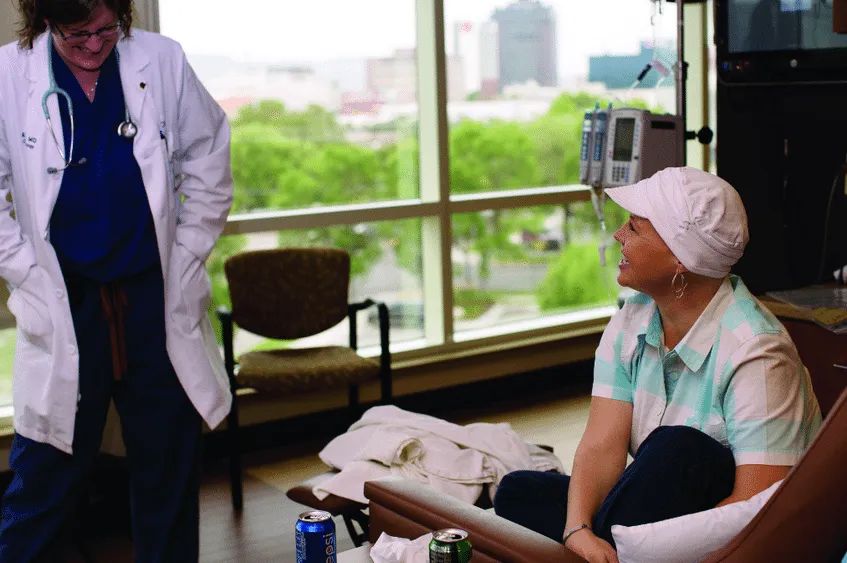 The afternoon sun shines brightly through a sea of windows as 45-year-old Lorna Philp and her husband Tom share another six-hour visit to the infusion room. It’s not an office-type setting, rather, it’s a fairly comfy space offering snippets of privacy and great views of the city.

Above the hustle and bustle of the Commons area at Billings Clinic, the infusion room spreads across the south end of the fourth floor of the Cancer Center like a penthouse. It embraces panoramic views, leather recliners and women just like Lorna who are undergoing cancer treatment.

The good news today is Lorna’s determined to beat cervical cancer. This vivacious woman from Winifred is heading to the finish line. Equally good news is that this type of cancer could be preventable.

“We have something better than a cure for cancer,” stresses Dr. Erin Stevens of Billings Clinic, one of only three gynecological oncologists in Montana that service a five-state area. “We have a way to prevent it from ever becoming cancer in the first place.”

“The vast majority of cervical cancers are actually caused by a virus, the Human Papilloma Virus (HPV).  For cervical cancers, HPV is like the common cold of the vagina.  If you’ve been sexually active, you’ve probably been infected with at least one of more than 100 strains.  Certain strains have more potential to cause pre-cancerous and cancerous changes in cells, which can be detected on a pap smear,” she shares. 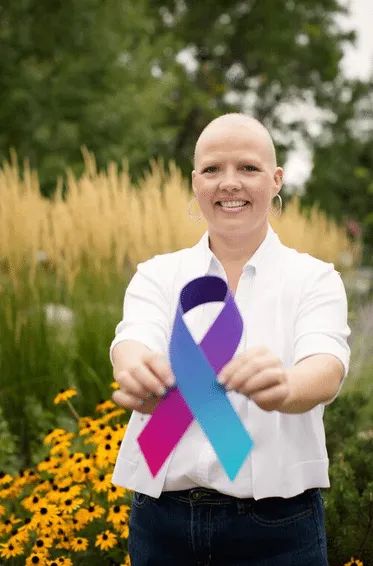 However, now there is a vaccine (Gardasil 9 ®) that can protect against 90% of the strains of HPV that can cause both pre-cancerous and cancerous changes.

“If we would vaccinate everyone between the ages of 11 and 26 before they are exposed to the HPV virus, it would prevent 300,000 women each year in the US from having to undergo treatment for precancerous changes in the cervix, and 12,000 women from being diagnosed with cervical cancer each year in the United States.”

We all have the potential to be exposed to HPV. Dr. Stevens says it’s hard to raise awareness of it as nobody wants to talk about it. “There’s a stigma attached to it because it has to do with sex,” she says. “But sex is part of life.”

Lorna’s diagnosis of cervical cancer unfolded this past March. A half an hour after going to bed one night she woke up with terrible stomach pain. Tom rushed her to the emergency room in Lewistown where the doctor discovered a seriously low hemoglobin count. The protein that carries oxygen in the red blood cells was about half of what it should be. After a blood transfusion, she was transported to Billings.

“What led up to this,” explains Lorna, “was heavy menstrual bleeding. I just thought it was part of getting older, plus, I was not getting yearly exams for ten years. I didn’t listen to my body. The signs were heavy bleeding and cramping. I work full days for the NRCS (National Resources Conservation Service) and we’re building a new home. I put my tiredness off to working hard and the uncomfortableness in my abdomen area to pre-menopause.”

Cervical cancer lies in wait, but it can be detected early on with regular Pap smears and HPV tests. Early on there may be no symptoms, however, when advanced, abnormal bleeding or discharge usually occurs.

Lorna may not have had to endure the months of chemotherapy and radiation treatments, the fatigue, the loss of hair and other side effects if she’d received her regular PAP tests. Looking back, Lorna reflects, “In 24 hours, our world was turned upside down.”

As Lorna’s IV trickles the chemo drug into her body, she smiles and laughs like she’s just won the biggest marathon of her life. She’s a survivor representing a magenta-colored ribbon. “I’m going to whip this,” says this positive thinker. “I need to put on our large Thanksgiving dinner with all our friends and family in our new house!”

Lorna and Tom maintain their incredible upbeat attitude. Their decision to go aggressive with Lorna’s treatment reassures them that they’ll enjoy their turkey dinner in their new home. Their motto is “move forward,” however, Lorna expresses her concern for other women.

“Listen to your body,” she advises. “Get your yearly exam. It is one hour out of your life. We have vaccines to stop measles and now we have a vaccine that can help you not get cancer. We can end cervical cancer!”

Another female cancer – vulvar cancer – is both rare and highly curable if caught early and is represented by a lavender-colored ribbon. The color for primary vaginal cancer is blue, while a peach ribbon denotes uterine/endometrial, the most common gynecologic cancer that is highly curable. Teal represents ovarian cancer, the most fatal.

“But in reality, ovarian cancer has specific symptoms: bloating, feeling full with not eating much, changes in bowel or bladder habits, or pain in the lower abdomen. These symptoms are often disregarded as normal, but if they appear on a daily basis for more than two to four weeks see your primary physician.”

The bloating, ‘feeling full’ and the constipation, which she says she always dealt with, happened to Kaye Blair. “Two years ago, I caught every bug whether flu or respiratory,” Kaye recalls. “I thought, ‘I’m getting older,’ but by the beginning of 2014, I just didn’t feel good and my tummy was always nervous.” 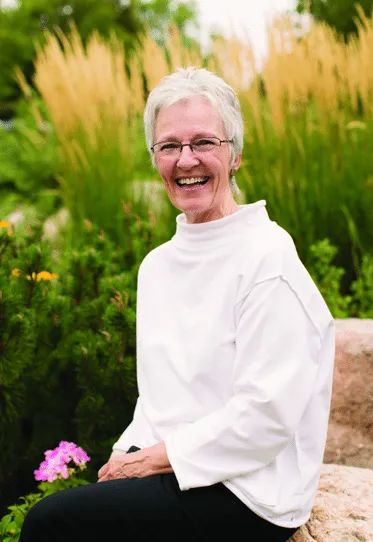 These bothersome changes didn’t alarm this vibrant and energetic 73-year-old retired nurse until she gained some weight. “I got a little pouch above and below my tum and then one day in May on a trip to Canada I got bloated eating small salads. On the way home, my husband Mark said, ‘We’re going to the emergency room when we get home. This isn’t you.’”

A visit to the doctor put ovarian cancer on the suspect list. A CA-125 blood test and a vaginal ultrasound performed on Memorial Day confirmed it. “I had 3.8 liters (about one gallon) of fluid taken off my stomach,” says Kaye, with bright eyes sparkling and an unending smile. “I was uncomfortable. I couldn’t button my pants. I couldn’t sit or lay down.”

The cause of ovarian cancer is still undetermined, notes Dr. Stevens. “The leading theory is that the cancer starts at the end of the fallopian tube.”  She mentions that this type of cancer tends to be more prevalent with higher socio-economic status and the risks include family history, age and infertility.

“Birth control pills, pregnancy, breastfeeding and getting your tubes tied actually decrease the risk. Over the last ten years, we’ve really made good advances in treating ovarian cancer” she adds.  “Now people are living for years with the disease.” 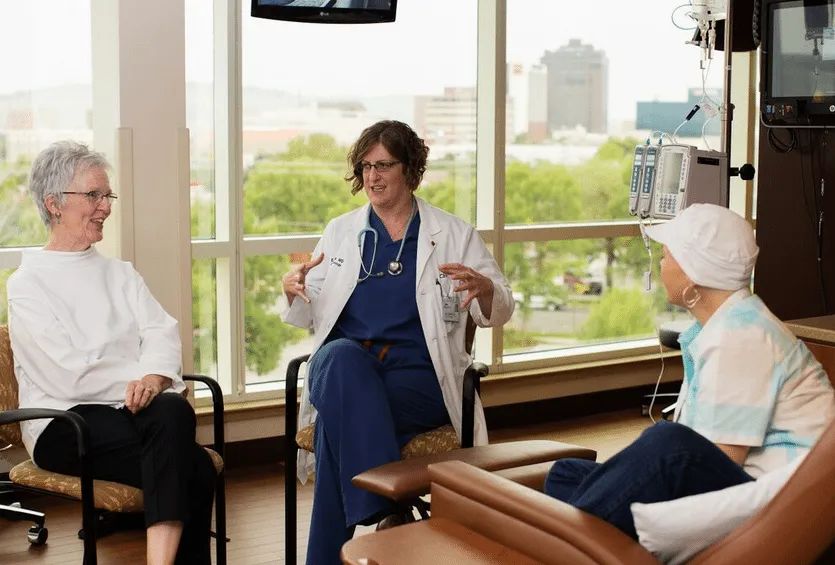 There aren’t enough words to articulate the look in Kaye’s eyes or the hope on Lorna’s face or the explicitness of Dr. Stevens’ educated plea when each appeals her concern for women.

“It’s frustrating for me as a gynecologic oncologist,” conveys Dr. Stevens, “because I don’t see people until they’ve already been diagnosed with cancer. Everyone wants to talk about finding the cure for cancer. We’ve actually got something even better: three shots to prevent it,” referring to the Gardasil 9 ® series for HPV prevention. “You don’t even have to get cancer in the first place.  I can’t stress it enough:  let’s get our kids vaccinated.”

In regard to her ovarian cancer journey, Kaye reminds us, “Listen to your body. If something doesn’t feel right, it probably isn’t. Don’t keep ignoring it. A cancer diagnosis is like getting hit alongside the head. Live each day to the fullest and find joy. Life is so precious.”

Cervical Cancer: According to the Center for Disease Control (CDC), Human papillomavirus (HPV) is the most common sexually transmitted infection in the United States. Infection with HPV can be prevented by a vaccine, such as Garadsil 9 ® or Ceravix ®. Early-on symptoms of cervical cancer may not be apparent, however, in advanced stages abnormal bleeding or discharge should be checked by your primary physician. Annual pelvic exams and regular PAP and HPV tests are a reliable screening method for detection of cervical cancer.

Ovarian Cancer: There is no effective screening test for ovarian cancer, so it’s important to know the symptoms.  Bloating, feeling full with not eating much, changes in bowel or bladder habits, or pain in the lower abdomen, that persist for two to four weeks without improvement, should be addressed by a regular doctor.

Uterine/Endometrial Cancer: “There are 50,000 to 60,000 diagnoses in the U.S. yearly,” says Dr. Stevens. “Obesity, high blood pressure and diabetes put you at risk to develop uterine cancer. Our country has a rampant problem with obesity, so as a result we’re seeing more and more of this cancer.  It’s one of the only cancers that is on an increase each year in our country.” Reduce body fat by exercising, eating a heart-healthy diet, and don’t take estrogen by itself, without progesterone for hormone replacement during menopause. “Any bleeding after menopause is not normal and should be evaluated to rule out cancer as the cause,” points out Dr. Stevens. “Your periods do not restart! See your physician if this is happening.”

Vaginal and Vulvar Cancer: Just like cervical cancer, some vaginal and vulvar cancers are caused by HPV and can be prevented by the same vaccine that prevents cervical cancer.  Some vulvar cancers are caused by other skin conditions, such as lichen sclerosis, a thinning of the skin that causes itching and burning on the outside.  Any itching, burning, lumps or bumps that are noticed on the outside skin should be looked at by a physician.

GYNECOLOGIC TESTS YOU SHOULD KNOW ABOUT

Pelvic exam:  A detailed look at the skin on the outside (vulva) and the inside (vagina and cervix), as well as a palpation of the cervix, uterus and ovaries.  A pelvic exam is a full assessment of all of the gynecologic organs.  These should be done every year.

Speculum exam:  The metal or plastic duck-billed device that allows the doctor to look at your cervix and vagina on the inside.

Pap Smear:  Specific test that screens only for cervical cancer.  This test does not test for any other gynecologic cancers.  These should be done routinely (but not necessarily every year) with HPV tests.