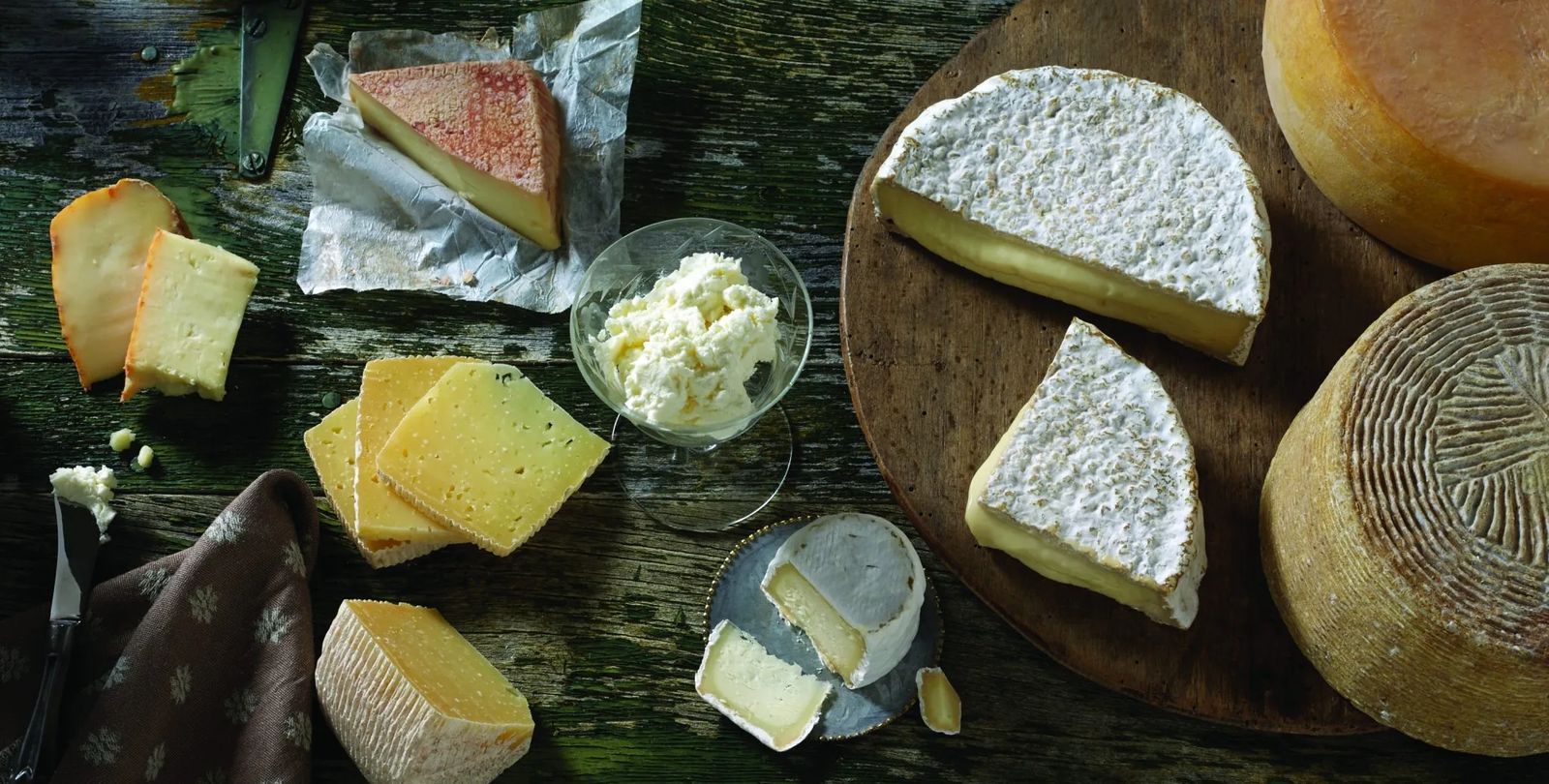 Lark Gilmer has the state’s noxious weed law to thank for her livelihood.  Gilmer is not a state inspector, an herbicide vendor or plant pathologist. She’s a shepherd and cheesemaker.

Montana’s County Weed Control Act, Title 7, Chapter 22, Part 21 of the state code, means landowners in the Ruby Valley invite Gilmer to run her weed-eating Icelandic sheep for a nominal fee on their pastures. In turn, the sheep produce milk for some of the hand-crafted farmstead cheeses she makes and sells state and countrywide. 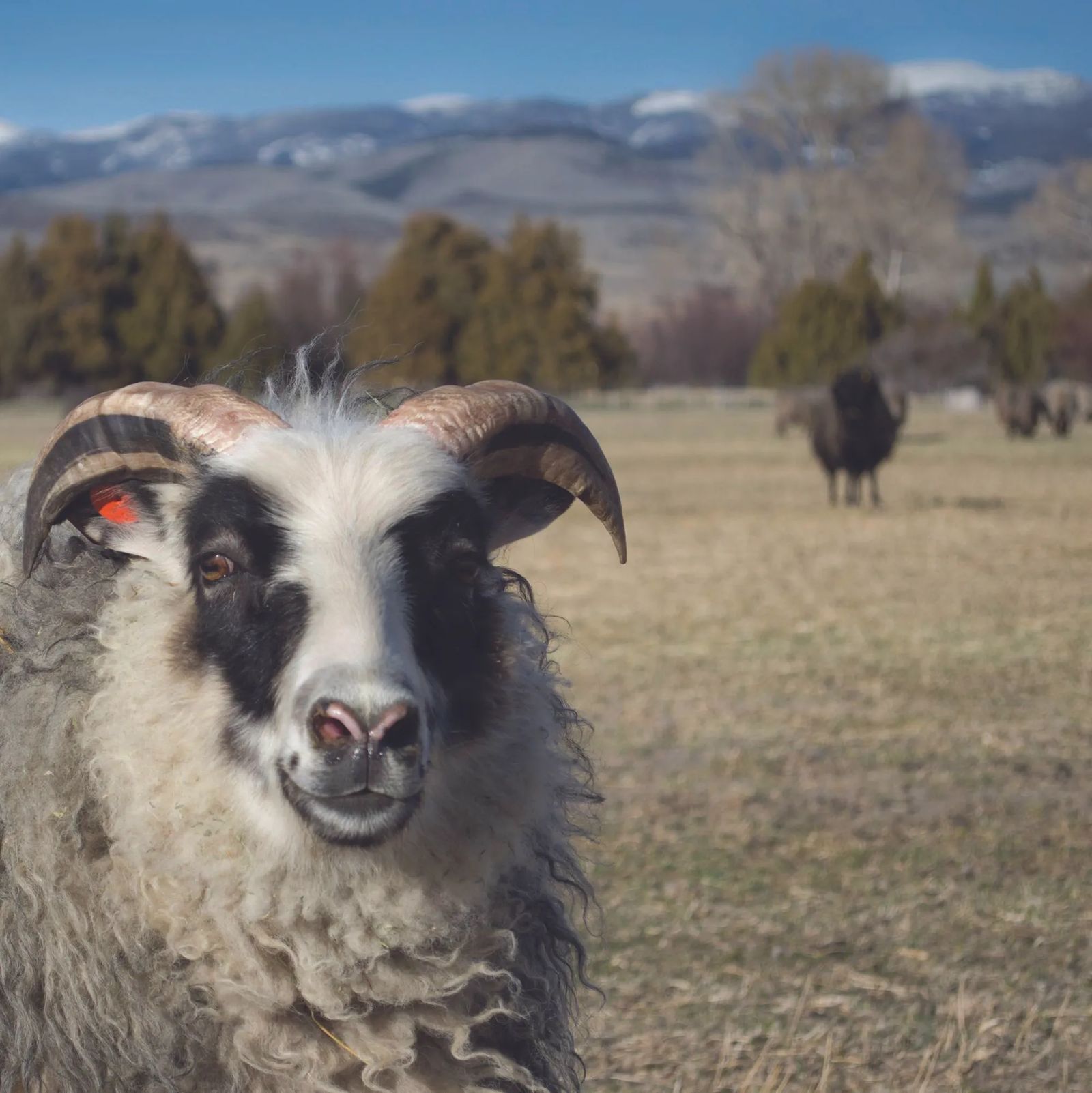 “Artisanal cheeses have so much more depth, they take your taste buds all around the world and tell their own story,” Gilmer says, “whereas industrial cheeses kind of flat line.”

Gilmer, 57, started the Poor Orphan Creamery in Laurin, Montana two years ago with her then husband, Charles Smothermon, with whom she moved here in 2003 from the Basque Country in France. The creamery, which opened in 2014, is the confluence of Gilmer’s life-long – and, for a long time, seemingly disparate – interests: sheep, cheese and photography.

Born in Minneapolis, Gilmer learned photography through apprenticeships in England and France, and has worked as a high-end commercial photographer for most of her career, most recently as photography director for WB Studios.

But photography was never her sole interest.

In her 20s, she shared a house in Oxford, England with a son of Major Patrick Rance, one of Britain's leading cheesemongers who rescued specialist cheeses from oblivion. Gilmer spent holidays at his renowned village shop at Streatley, where he would display a couple of hundred cheeses at a time on open tables.

She also had a boyfriend at that time, whose family raised sheep. She would help lamb and tend the sheep on visits and, later, sought out shepherds, on her travels for work and pleasure. 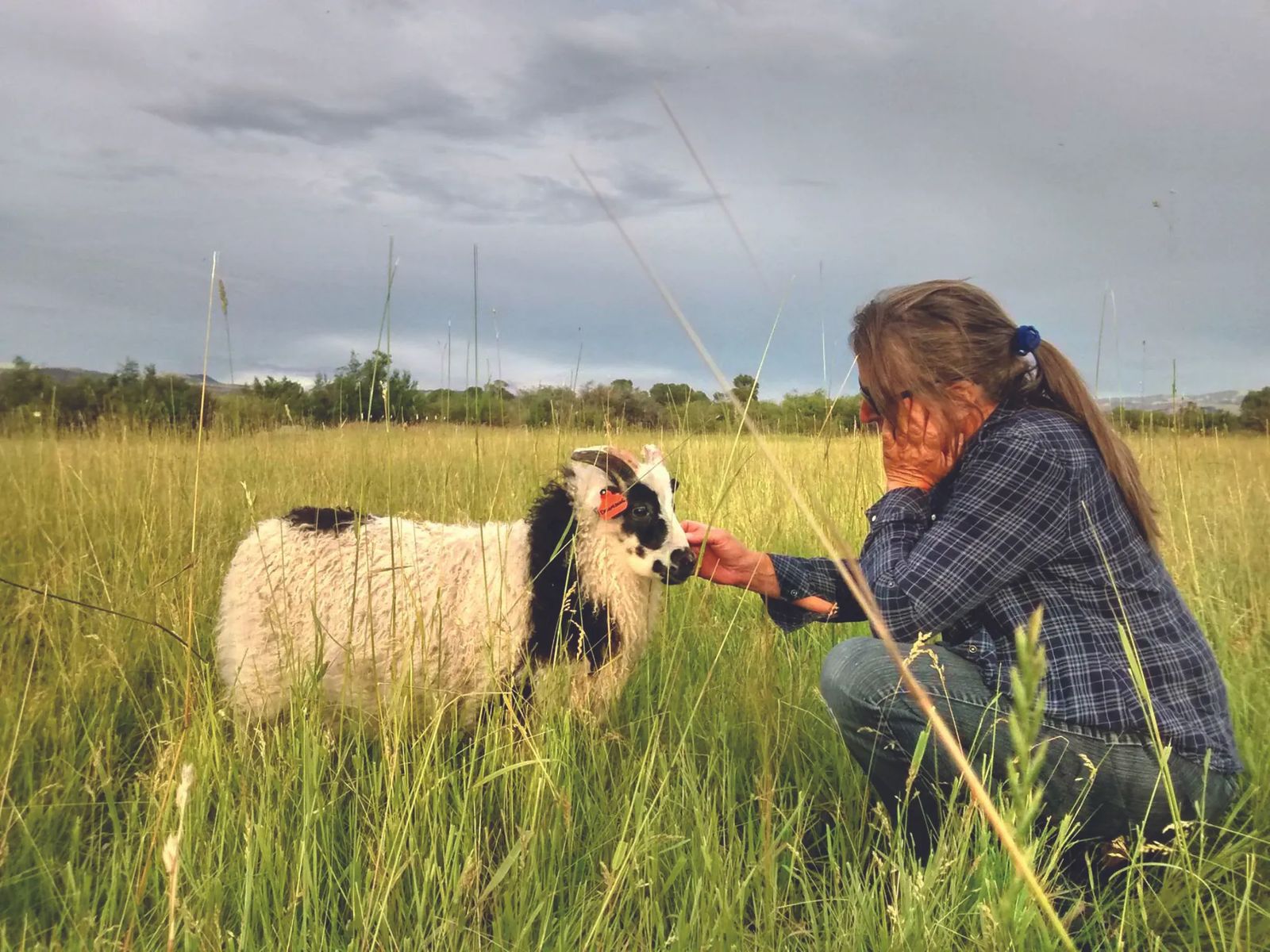 When happenstance led her to the Basque Country, where she bought a house and learned sheep could be milked and that milk made into cheese, her fascinations came together.

“Working with fiber didn’t trip my trigger and that was the only product I was aware of that could be made from sheep,” Gilmer says. “When I discovered I could make cheese, I loved the way it tasted and it could pencil out.”

Almost randomly, Gilmer found a house, the town’s old schoolhouse, while passing through Laurin on a commercial photo shoot. The hamlet’s myriad and, in some ways, mystical, connections to France enchanted her, and, some years later, she began building her flock, milking her sheep for homemade cheese and looking for a location for a creamery. (She now lives elsewhere in Laurin and rents the schoolhouse.)

After three or four creamery locations fell through, Gilmer settled on one, an industrial building that had been used as an Army Navy surplus store, then jumped through numerous hoops to open Montana’s first sheep dairy, designing and building its first portable milking parlor and becoming one of the first artisan cheesemakers in the state. (There are now seven.)

“Most people would have cried uncle and stopped,” says Gilmer, who describes her tenaciousness as part Border collie and part Jack Russell. “You really have to be able to not take no for an answer.”

Making cheese – Gilmer makes sheep and cow milk cheese – is expensive. There are the sheep (200 “Icie” ewes). There’s the land to graze them on, along with the milking parlor, the manufacturing facility, the sky-high utility costs, the round-the-clock hours of production and the storage and distribution. 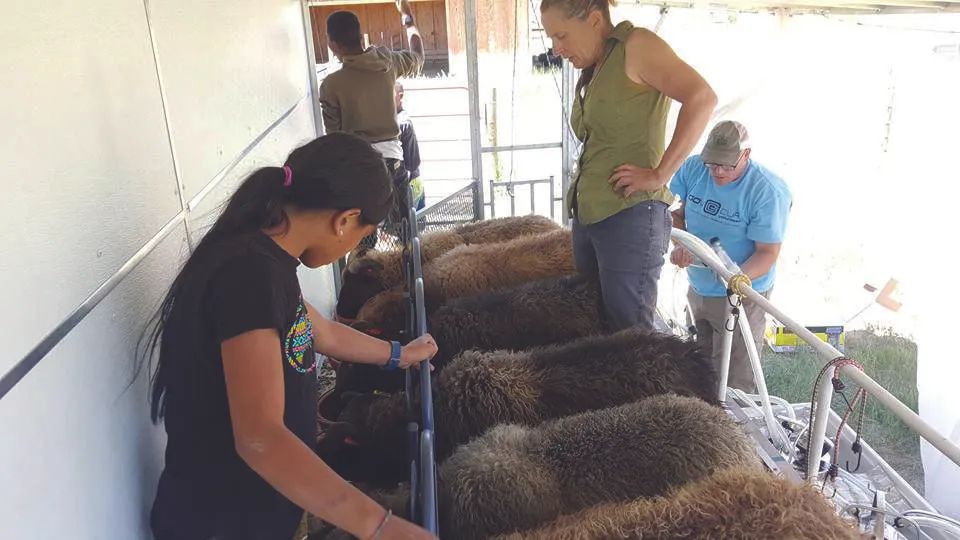 The cow milk and cream used for most of Gilmer’s cheeses comes from the Montana State Prison dairy operation near Deer Lodge about 1 ½ hours away. She also plans to make goat milk cheese from extra milk from Amaltheia Organic Dairy near Bozeman.

“It comes down to trying to shave as much as possible in certain areas to be able to do agriculture,” Gilmer says. “Ag is a calling. You don’t do it for the money.”

To get her operation off the ground, Gilmer has received a number of state and federal grants over the years.

In 2009 and 2011 Gilmer received two grants and one loan, each $25,000, through Montana’s Department of Agriculture’s Growth Through Agriculture program.  In 2010, a $26,000 USDA Rural Business Enterprise Grant paid for some of the creamery’s infrastructure, as well as a certification from the Vermont Institute of Artisan Cheese she received in 2010. In 2014, Gilmer received a $15,750 USDA Value-Added Producer Grant. In 2015, she received a $13,161 Rural Energy for America Program (REAP) Renewable Energy and Energy Efficiency Grant Award that allowed her to install a solar electric and solar hot water system.

Gilmer designed the creamery to be able to handle 26,000 pounds of cheese a year, her estimation of what she’d need to produce to be sustainable, and to employ up to eight people. She produces about one-quarter of that now, using up to 240 gallons of cow milk a week, and employs one woman in the creamery, as well as a couple to manage the sheep.

The 30 by 70-feet creamery – made pretty by the addition of a façade – contains a tasting room, office, milk receiving area where the raw milk is filtered and cooled, the cheese make room, a cut and wrap room, two aging rooms and finished product cooler.

Gilmer makes cheese in small batches using just three vats, one 60, one 40 and one 20 gallon, which allows room for the “creative process” that is cheesemaking. Using this system, Gilmer can make three different cheeses in a day.

“Ninety percent of cheese making is the wash up, so why not make more varieties?” she says.

Sheep milk cheeses are more expensive and rare because the milk per animal is that much less than cow milk. The fresh milk varieties are only available July through November; the aged products are available year round. 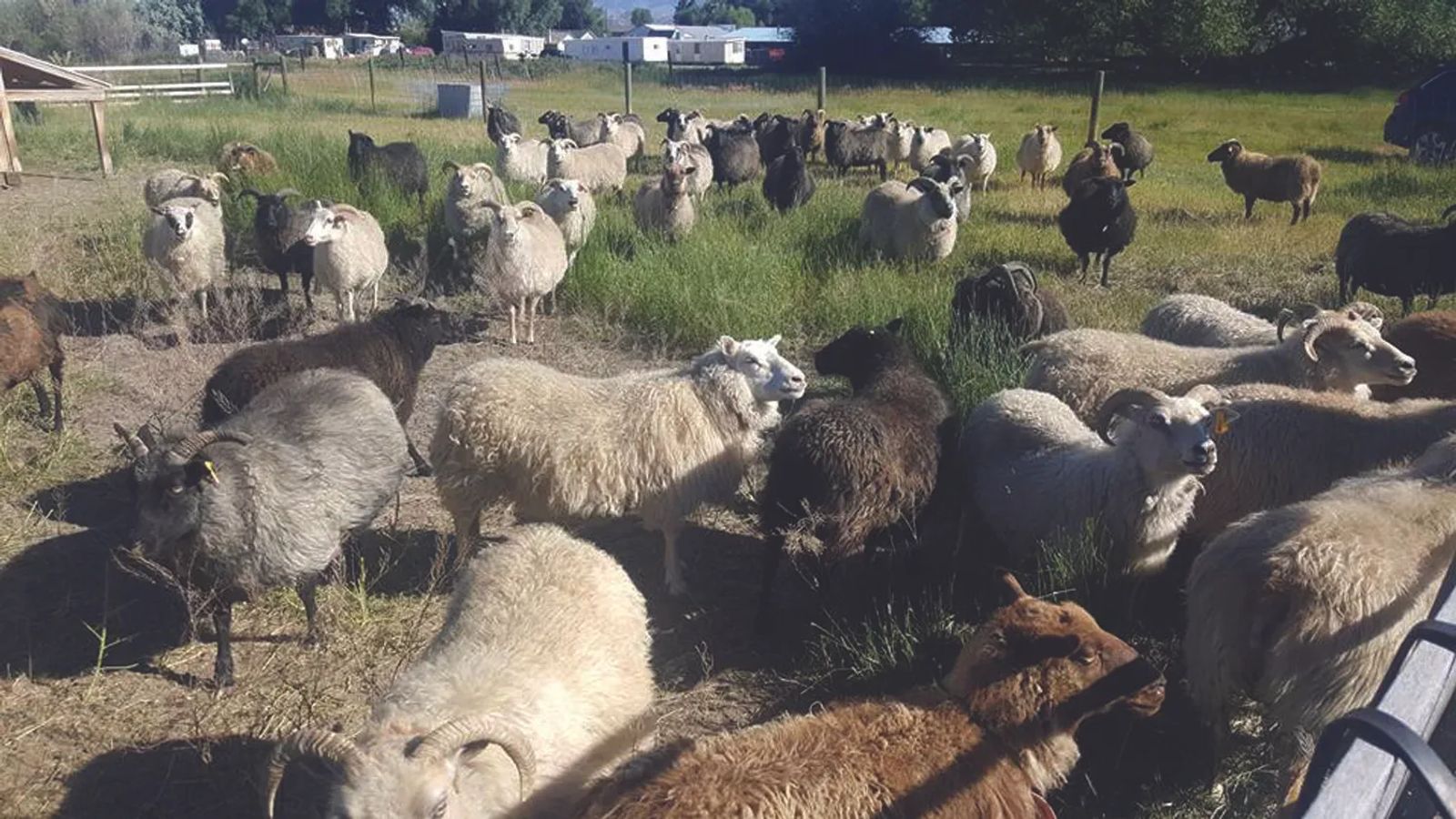 The type of milk and the style of cheese is just the beginning. It’s the post production – aging, washing, molding, brushing, rubbing and flipping – that takes not just physical labor, but patience and respect for the craft and finished product, much like photography.

“Working in the cheese room is similar to working in the dark room — it requires a certain time and temperature, the only difference is pH and light,” Gilmer says. “I’m singing the same songs I was singing in the darkroom. It’s a solo practice that takes a certain personality type to develop film and make cheese.”

Gilmer sells her cheeses at farmer’s markets and regional and national fine food stores. Recently, she was at Lucky’s Market in Billings, Montana, where she was giving a tasting in advance of the store beginning to carry her products.

Much of Gilmer’s cheese language –fromage blanc, chevre, triple cream – was lost on Saturday afternoon patrons, but her stories of lush Ruby Valley pastures, Pyrenees apprenticeships and the made-in-Montana spirit it took to make it all happen most definitely was not.

“The way to sell cheese is to sell the narrative, so I show up,” Gilmer says.

The way that feels OK is that it’s the real deal, her true life’s calling.

“Advertising is my background, but you have to be authentic,” Gilmer says. “The narrative for me is the authentic voice. You tell your true story.”

More information about Montana Department of Agriculture’s Growth Through Agriculture program is available at http://agr.mt.gov/agr/Programs/GrantsLoans/GTA/. 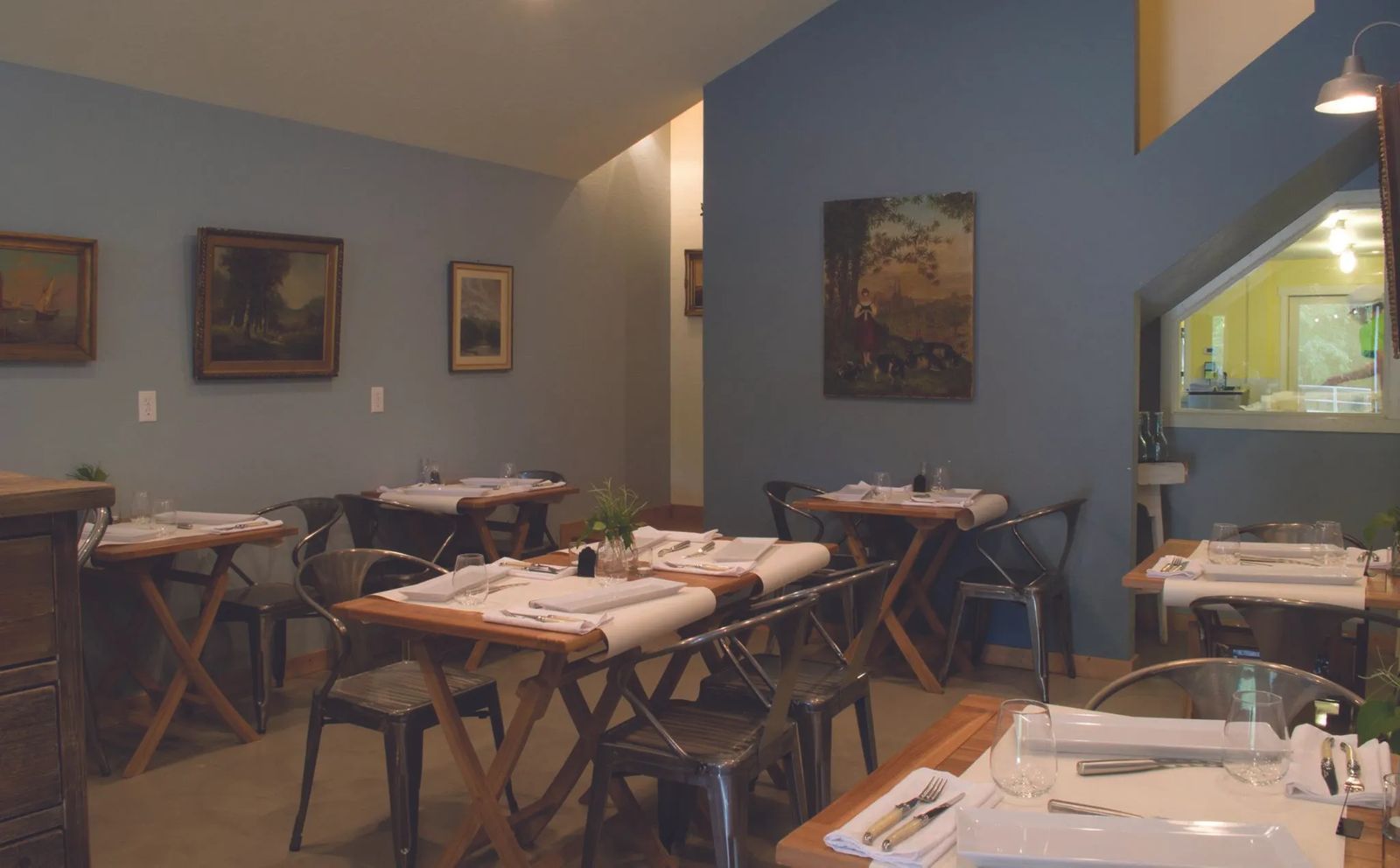 After visiting places like the Wedge and Wheel in Stillwater, Minnesota or Cured in Boulder, Colorado, Lark Gilmer knew there was another way to reach cheese lovers from far and wide. She needed to give them a taste of her business, literally.  On July 30, she opened The Tasting Room, a space right off the creamery that seats up to 26 where folks can sample cheese and sip some great wine. “The big attraction for me is that it gives me the opportunity to share a broader narrative, other cheesemakers’ stories, and then pair it with wine,” Gilmer says. Since that opening night, Gilmer has seen a steady stream of customers flow through with sellout crowds both nights. The Tasting Room is open Friday from 5PM to 9PM and Saturday from 11AM to 9PM. Look for special events in the months to come including movie nights, fondue gatherings and even specialty cheese 101 tastings.