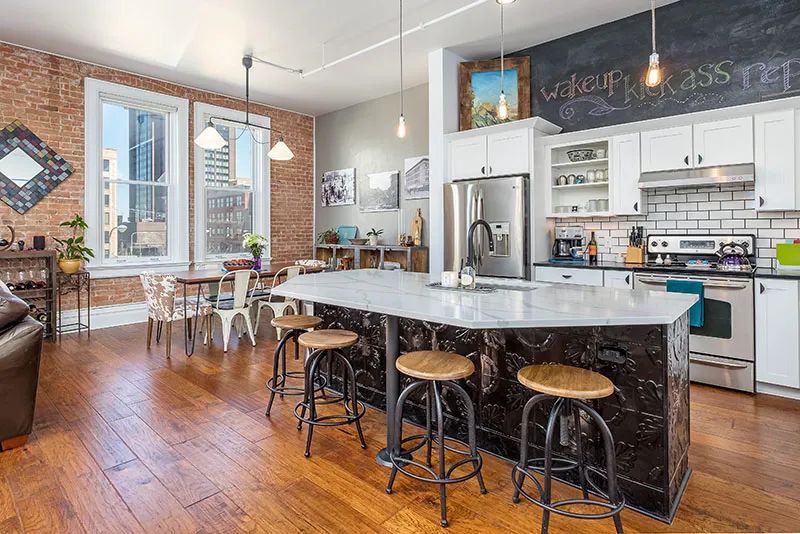 Lofty Living in the Heart of Downtown

In the center of Billings, once-forgotten historical buildings now bask in new life. “It’s only going to get better,” booms Randy Hafer, president and co-owner of High Plains Architects, a visionary working to make the heart of downtown a mecca for living in Billings’ urban core.

Two decades ago, Randy’s interest in downtown living was sparked when he transformed an old downtown warehouse into Billings’ first loft-style apartments. He relocated his office there and the spot ended up being listed on The National Register of Historic Places.

A few years later, he took on his second renovation project with the Klos Building, a former saloon constructed in 1893. From there, he’s masterminded other downtown projects, including the Stapleton Building’s ‘individually owned’ condominiums.

“There is no vacancy downtown,” Randy says. “All the stars are lining up and we’re looking for new opportunities downtown. We’re excited about doing a big project by developing a concept for new construction for a 50-unit eco-loft.” 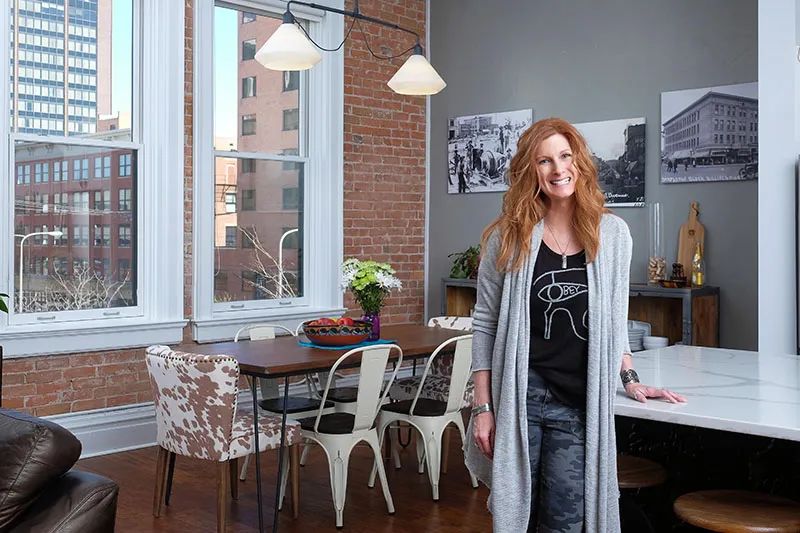 At night, the lights on Broadway reflect a bustling nightlife. During the day, as sunlight filters through four titanic-size windows in Julie and Shaun Seedhouse’s third-floor loft condominium in the Stapleton Building, a bird’s eye view of this vibrant city is on display.

“I walk in here and can’t believe I live in this space,” says Julie, a Realtor for Century 21 Brokers. “It’s marvelous!”

Just two years ago, this dynamic couple lived on the far west end of town in a grand house with yard to match. “Our sons grew up and left us with a big house,” Julie says with a laugh. “We decided then that we wanted to be closer to town.”

Little did they know they’d end up smack dab in the middle of downtown. A decade earlier, they had taken a tour of some of the historic downtown buildings undergoing the transformation to loft-style living. “It was always in the back of our minds that this would be a cool thing,” Julie says.

The unexpected happened two years ago when Julie received a call from the former owners of this urban chic loft condominium. “They wanted me to list it,” says Julie. “We came and looked and we bought.”

In the early 1900s, the Stapleton Building was considered the largest and tallest building in Billings. Back then, it housed the iconic Hart-Albin Department Store.  The statuesque structure got a major facelift starting in 2004 and today it’s abuzz with retail and restaurants on the first and second level and homeowners living above the bustle.

“The biggest difference for us living downtown,” Julie says, “is our social life. We know everybody at Jake’s, the Brew Pub, and, it’s awesome to have Farmers’ Market right here. The Artwalk, Alive After Five — it’s all in our yard!” Julie adds, “We see our boys more often now because we’re downtown. They call us and say, ‘We’re at the Crystal, come on over.’ So off we go!”

The couple also enjoys entertaining friends and family in their 1,500 square-foot loft. The open living concept provides a wide-open large living area complete with kitchen and dining space. “This living room area was a tea room at one time,” Julie says. 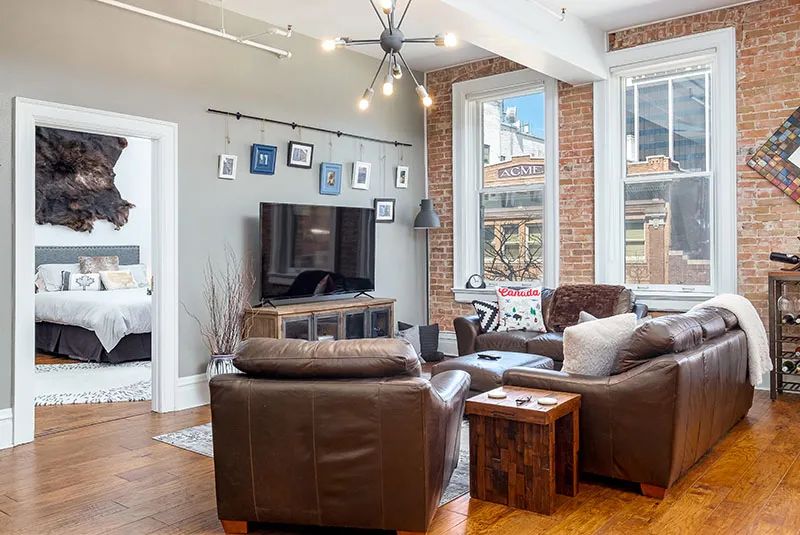 Original brick covers the walls from floor to the towering ceilings. It’s the perfect backdrop for the colossal white-trim windows. Wood flooring enriches the character of this vintage space.

In the open kitchen, light-colored subway tile makes a splash behind the cabinets that have been refaced by Pierce Flooring & Cabinet Design. “They extended out the center island with a big chunk of white quartz,” Julie says. The base of the island is wrapped with decorative dark tin providing a dramatic contrast. 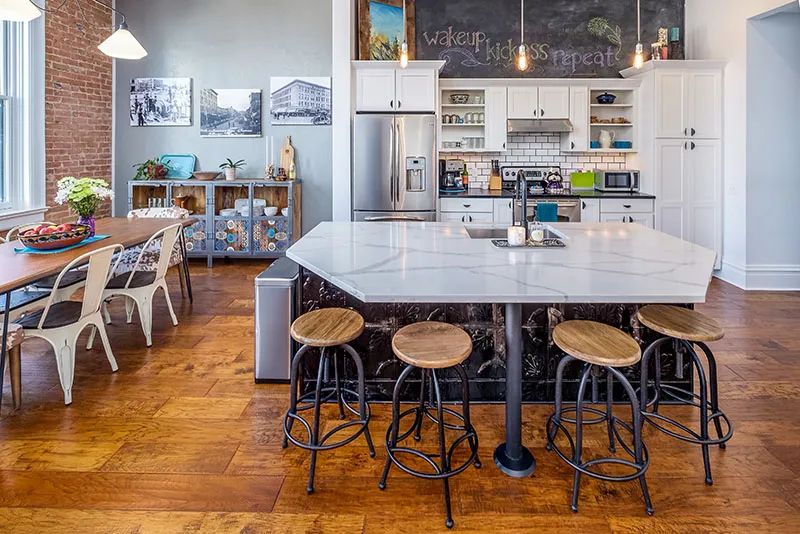 “It’s been so good to live cleaner, simpler,” Julie says. “It was quite a process (downsizing) as we got rid of half or our stuff. We came here and got rid of another half.”

The two-bedroom, one-bath space is the epitome of comfort and style. A large guest room off the main area offers a relaxed vibe with natural light pouring into this space. There’s also plenty of room for Julie’s desk where she can work from home. A recently revamped clothes closet gives her ample storage. “We redid the wall to create a big closet,” Julie says. “It makes my life much better.” 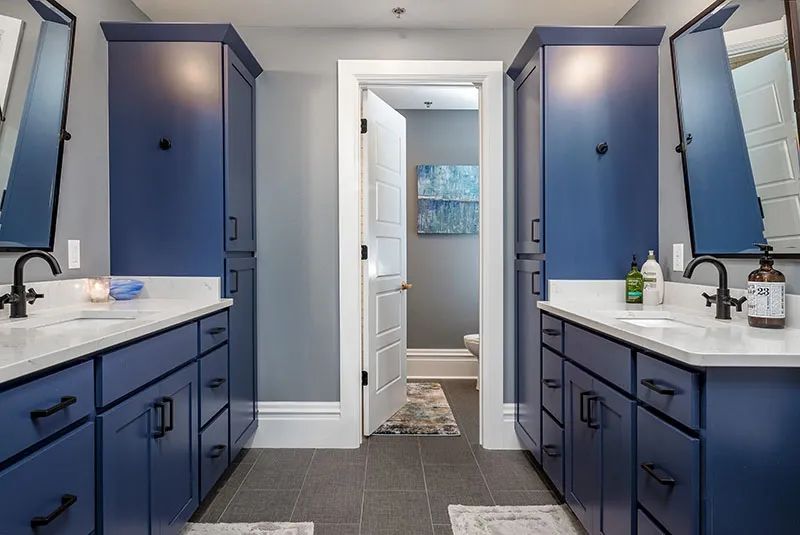 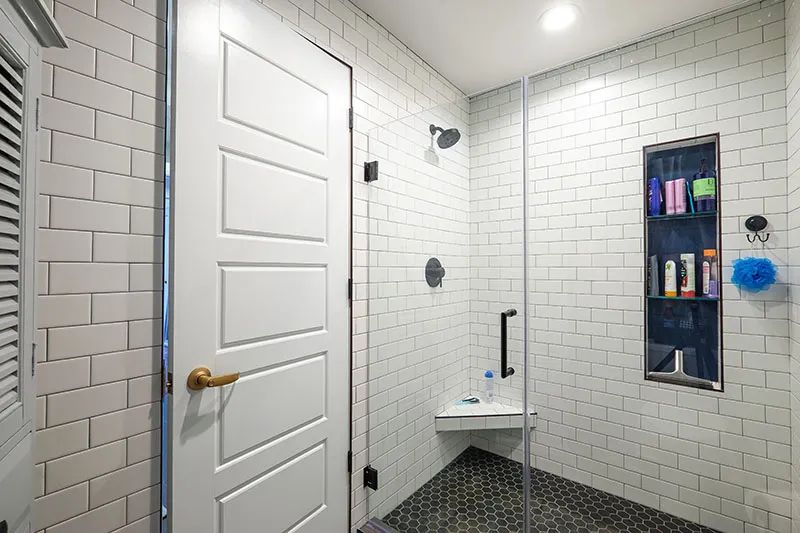 Across from this elegant bath, Julie slides back a white oversized barn door accessing the master bedroom. Exposed brick frames a large window in this serene space. Sliding the barn door closed, the neat hideaway for the washer/dryer becomes visible. “It’s so great,” Julie says with a smile.

Cherishing what they now own — a downtown loft condominium — Julie succinctly declares, “We’ll never leave here. We love it.” 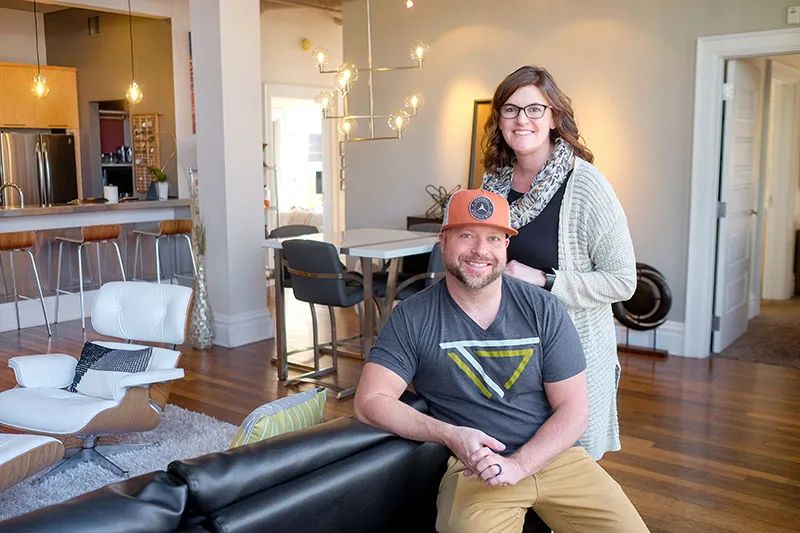 VIBE OF THE CITY

Just across the way, Lauri and Kenn Patterson take in the view from their third-floor balcony on the other side of the Stapleton Building. Today, you can clearly see the majestic Beartooth Mountains. While the views are stellar, the Pattersons bought this slice of downtown for the “vibe of the city.”

“It was almost like a premonition,” says Lauri, owner of One Source Lighting. “I helped (Interior Designer) Susie Hoffmann with the lights when she moved in here a decade ago. Kenn and I came to her open house and thought we could see ourselves living here.” 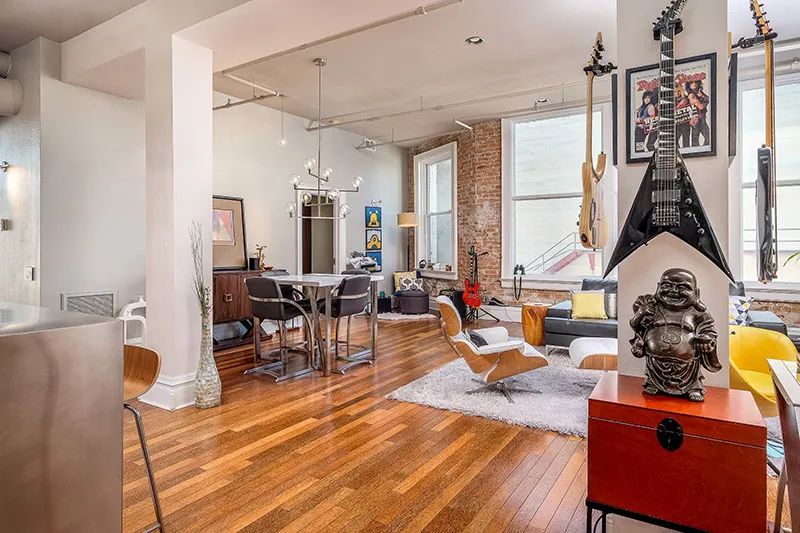 Roughly eight years later, while the couple was living in the Heights, “I ran into a guy that lived on the fourth floor,” Kenn says. The resident let it slip that a condo might be coming up for sale. The couple looked at the space on a Wednesday. “We made an offer on Friday,” chimes in Lauri, “and signed on Saturday. It was our house!” It just so happened to be the same third-floor condo that Lauri and Kenn thought they could see themselves living in years before. The best part, says Lauri, “We closed on this place on our 19th wedding anniversary.”

Then the work began.

“We took our three-car garage and squashed it down to a 10-by-10 storage unit,” says Kenn, musician and owner of KPT, The Kenn Patterson Tribute. “But, it’s okay because everything that plays a part in our life is here.”

Looking around this impressive living space, Kenn’s play on words strikes a chord. Artistically arranged half-way up the column in the open living area are four magnificent guitars. A fifth one rests in its stand next to the great room’s massive wall of windows. 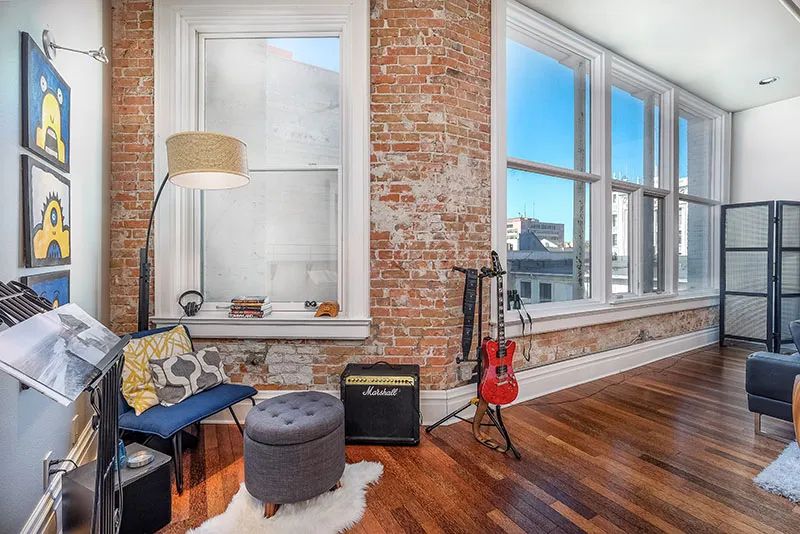 “When I walk out of the door in the morning, there’s a feeling of energy,” Kenn says. “You can feel the energy of the city.”

The couple agree they can walk anywhere and everywhere downtown. “We’re more social now,” Lauri says. “We’re such advocates of downtown.” Kenn concurs, “On St. Patty’s Day at 9 a.m., we had 20 people up here. There’s always something going on downtown and we start here.”

As passionate ambassadors of downtown, Kenn established a Facebook page, Downtown Billings Advocates, inviting people to get together. “We say, ‘Let us be your tour guides.’ We have little events and give tips and pointers on navigating downtown, like using the parking garage.”

Lauri and Kenn spend their off time exploring all the business and cultural nooks and crannies. They’ve discovered a lot during their downtown walks, including the building Kenn uses for storing his musical equipment, and Lauri now has her eye on a potential second location for One Source Lighting in the neighborhood.

“We love it,” they say in unison. They don’t miss having a yard since they have their own outdoor haven. “It’s the envy of the building,” Lauri says as we step outdoors. “We just pop outside on the balcony to get some fresh air.” 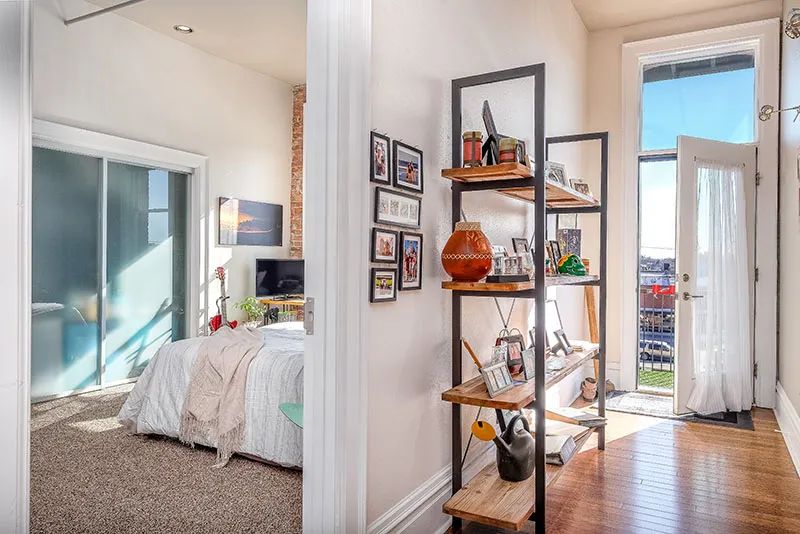 You see the design mix in the brushed nickel chandelier hovering over the contemporary dining table. You feel it in the exposed brick, celebrating century-old roots as the gigantic wall of windows pays respect to the quiet side of the old Babcock Theatre.

Artistic nuance reverberates in this space not only with Kenn’s guitars but with the black-and-white photography of downtown Billings by local photographer Adam Gross. Three metal photographs are placed between globe lighting that “mimics the street lights.”

Globe lighting carries over to the open kitchen where pendants cast an easy peaceful feeling over the stainless steel countertop. Palm wood flooring surrenders its warmth to this creatively decorated home. 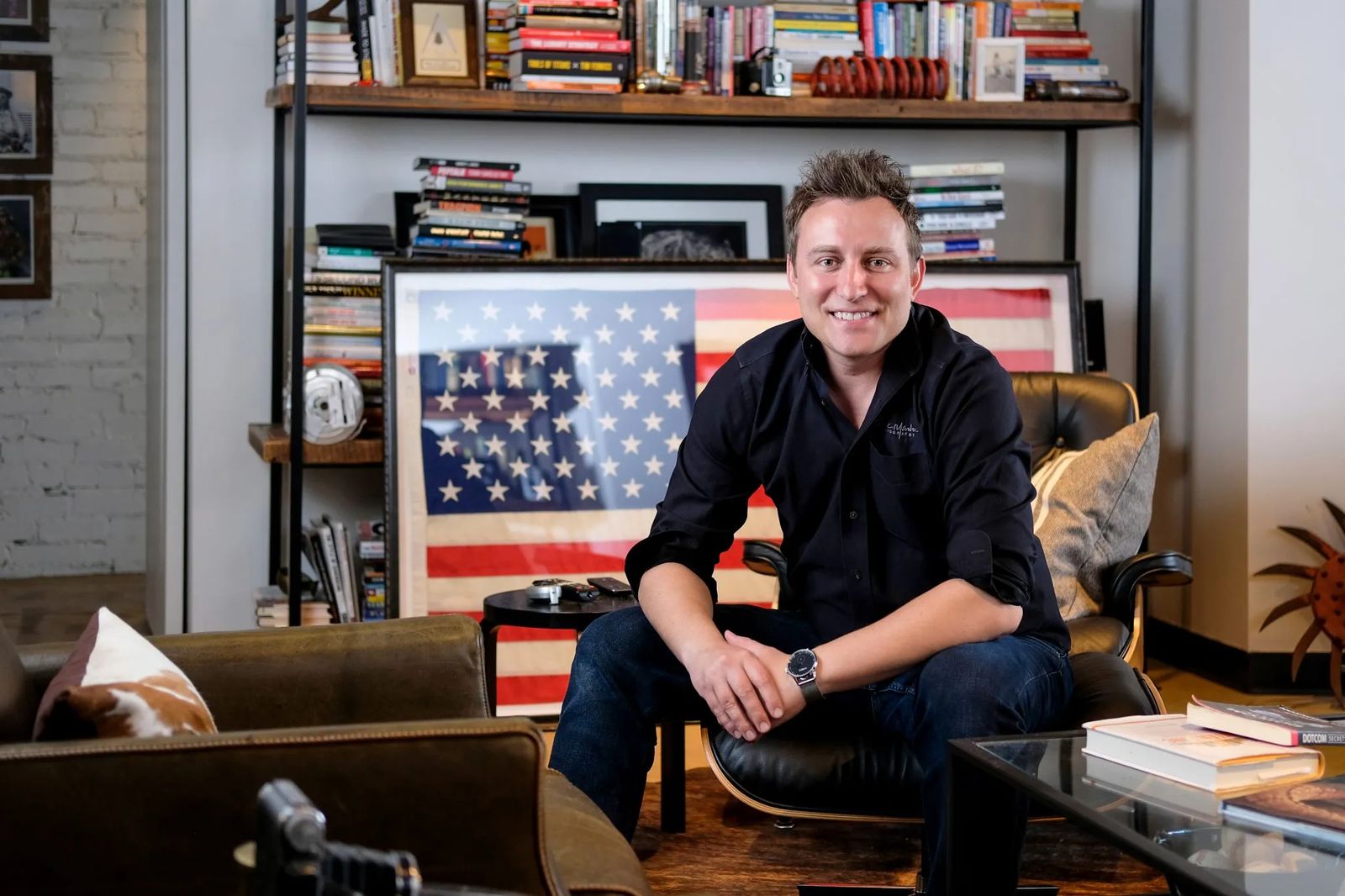 A few blocks away, the SoPo Loft Apartments come with their own unique history. This one-time industrial warehouse used to house automobiles in the 1920s. Later on, it was the hub for cigar manufacturing before becoming a retail space for the Wise Penny Thrift Store. Today, the lower level is the artsy and creative space for Clark Marten Photography. Upstairs, you’ll find the completely renovated loft of photographer Rudi Marten. It’s a space he calls “the ultimate bachelor pad.” 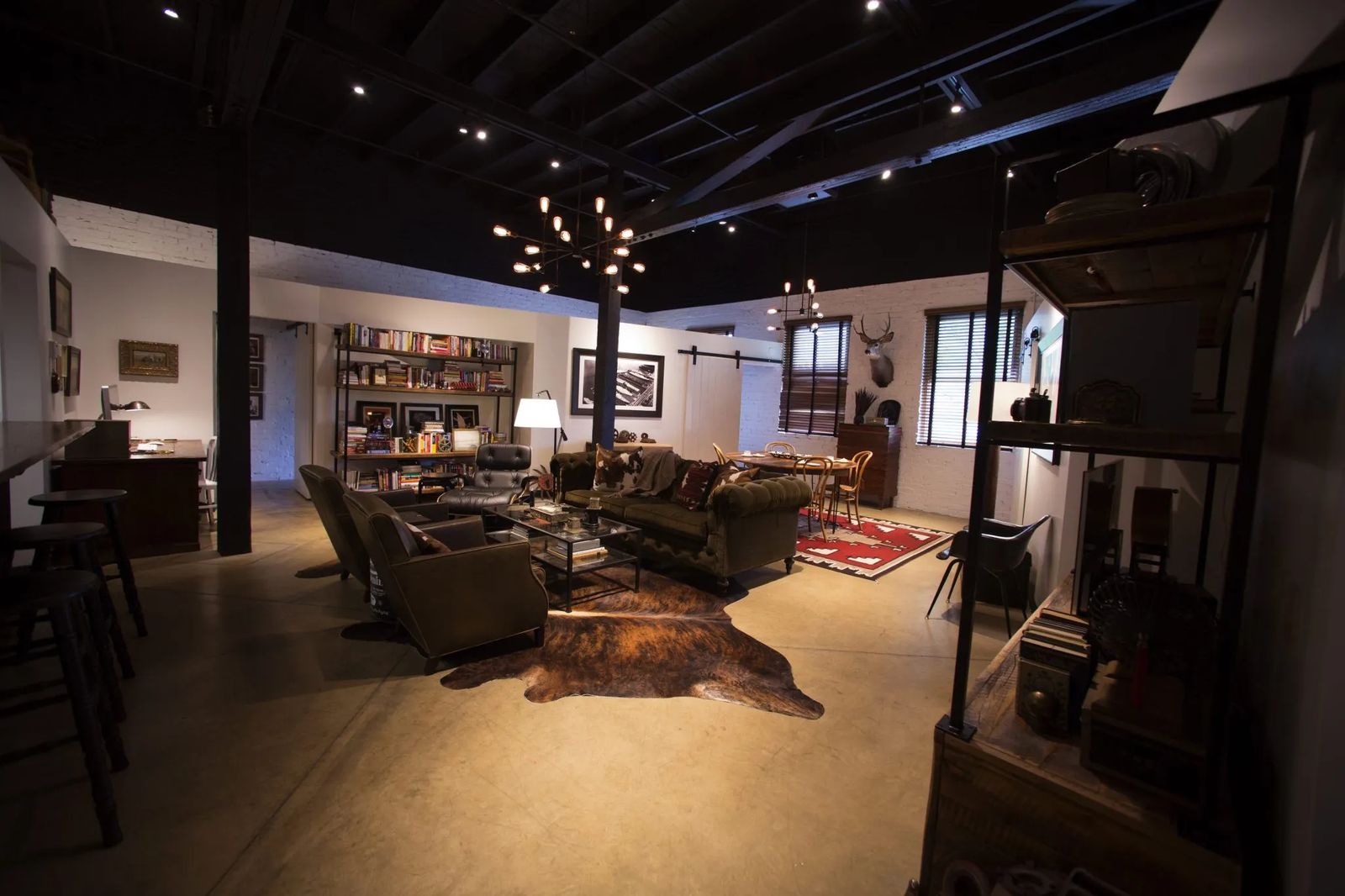 The Martens completely renovated the main level retail space about six years ago, giving a visual boost to this section of Montana Avenue. “We took out all the walls, put in stairs to open the lower level for staff and production, and put in new energy-efficient windows,” Rudi says. “It’s something you don’t expect in Montana, yet, it’s very welcoming to Montanans.”

The family later took on the lofts above this space, creating six apartments in the heart of downtown. Clark and his wife, Rachel, have one. Rudi lives in another. 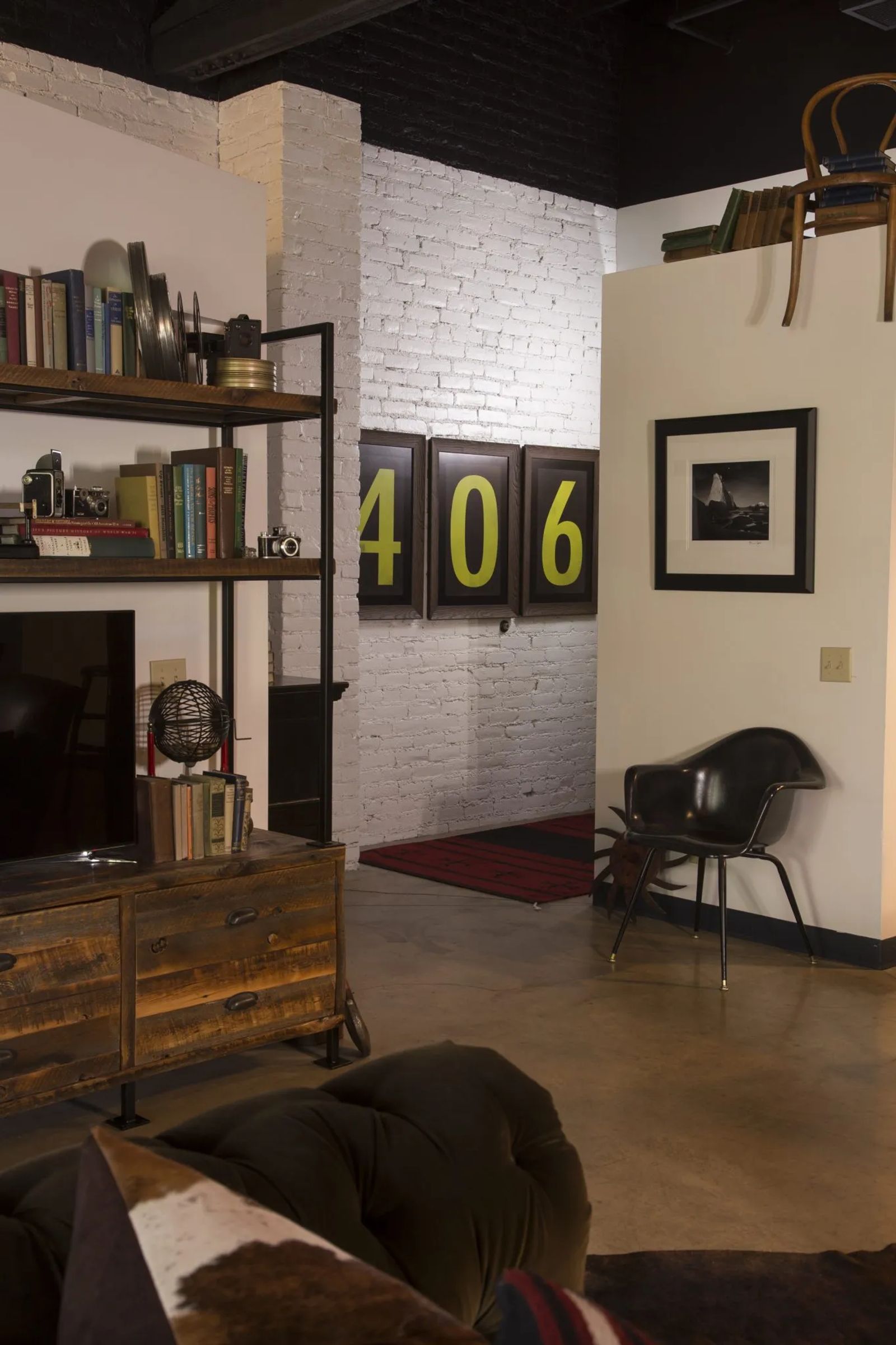 Rudi’s space carries a more rustic and Western feel. “I’ve always had an eye for mid-century. My favorite chair is a combination of mid-century and old world,” Rudi says. In decorating and furnishing his personal space, Rudi had Jeremiah Young of Kibler & Kirch bring in a “more sophisticated piece,” a green velvet Chesterfield sofa. In fact, the entire space was fine-tuned with Jeremiah’s help. 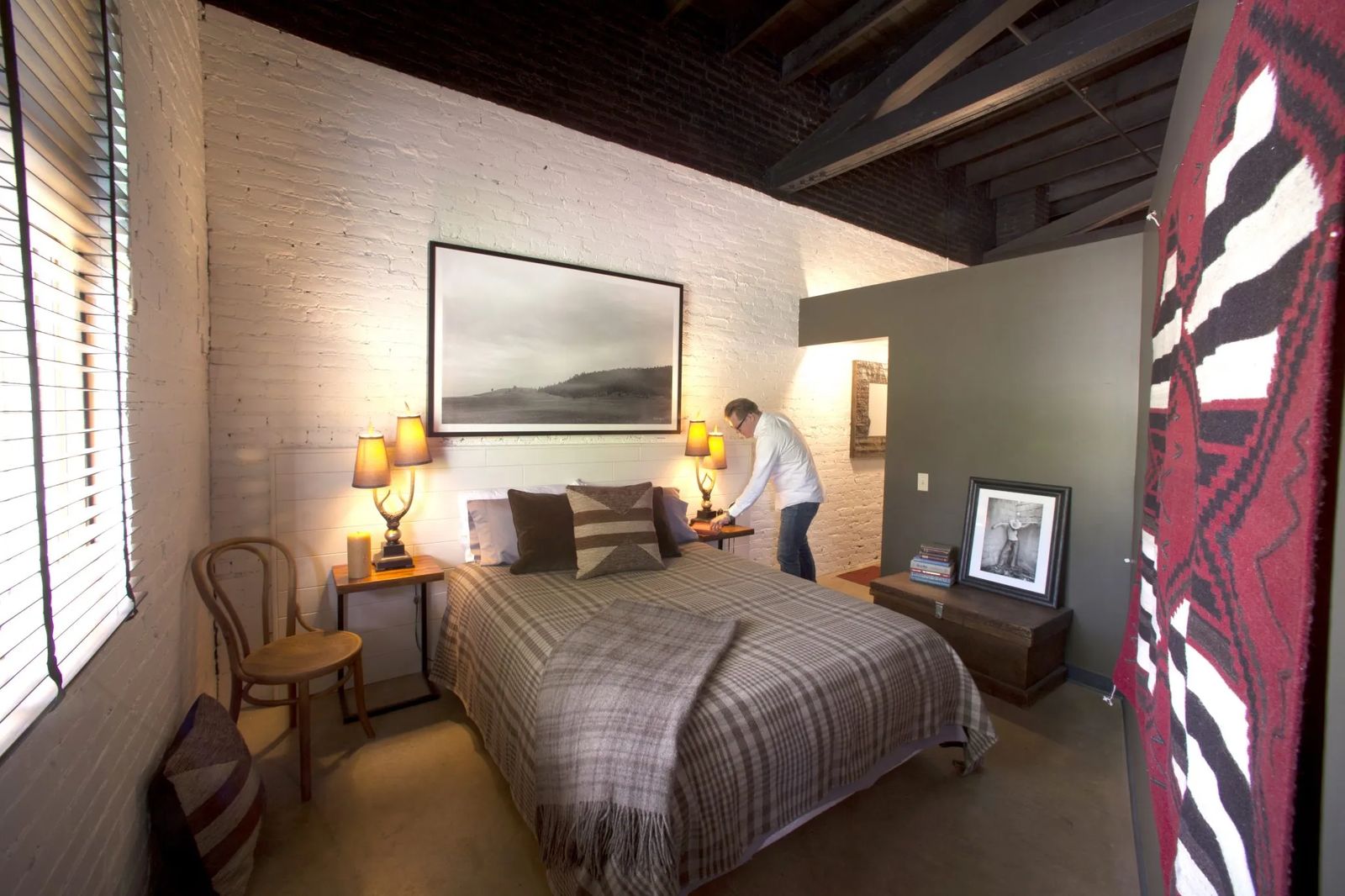 “It’s the original brick,” Rudi says. “It was yellow and white. We were going to soda-blast it to red but Jeremiah said, ‘Let’s keep it white.’ So, it’s stark white!”

The neutral color scheme lends dimension to shelving crafted from old barn wood gathered from the Marten family farm near Columbus. A vanity for guests in the photography studio below, designed by Jeremiah and richly topped with satin black granite, prompted the idea to incorporate barn wood upstairs. “This piece inspired me to put in the barn wood shelves in my apartment,” Rudi says.

The open bookshelves anchor both sides of the living area displaying this young professional’s collection of books. His love for art is prominent, as well.

A large black-and-white photo of the Titanic’s propellers enhances the historical aspect of this vintage space, as do a few pieces of Western artist C.M. Russell. Colorful “Native Pop” art adorns the wall between the master bedroom and the bath, boldly intensifying the character and spirit prevalent in this loft apartment. 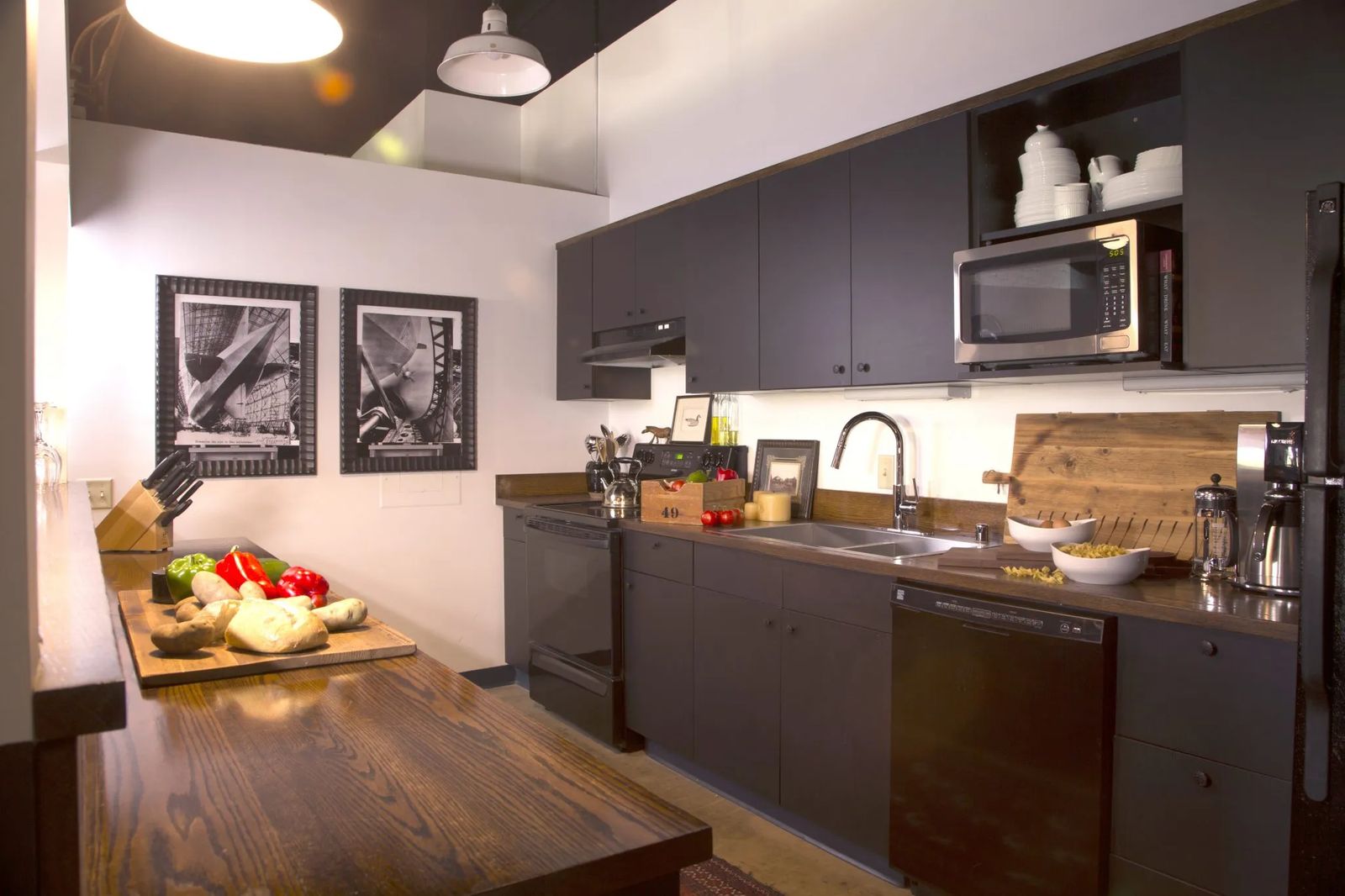 Rudi’s green velvet sofa charms the main living area while Edison bulb pendant lighting lavishes on yet another layer of classic design. Natural light pours through northern exposure windows showing off a white barn door covering the entrance to the guest bedroom. The light continues dancing into the open kitchen.

Rudi’s loft apartment caters to “lots of storage” with another barn door hiding a large closet off the front foyer. There’s not much else Rudi says he wants or needs. He loves that he can pop downstairs to work. Living and working downtown remains on the top of Rudi’s list. “I wouldn’t want it any other way,” he says.