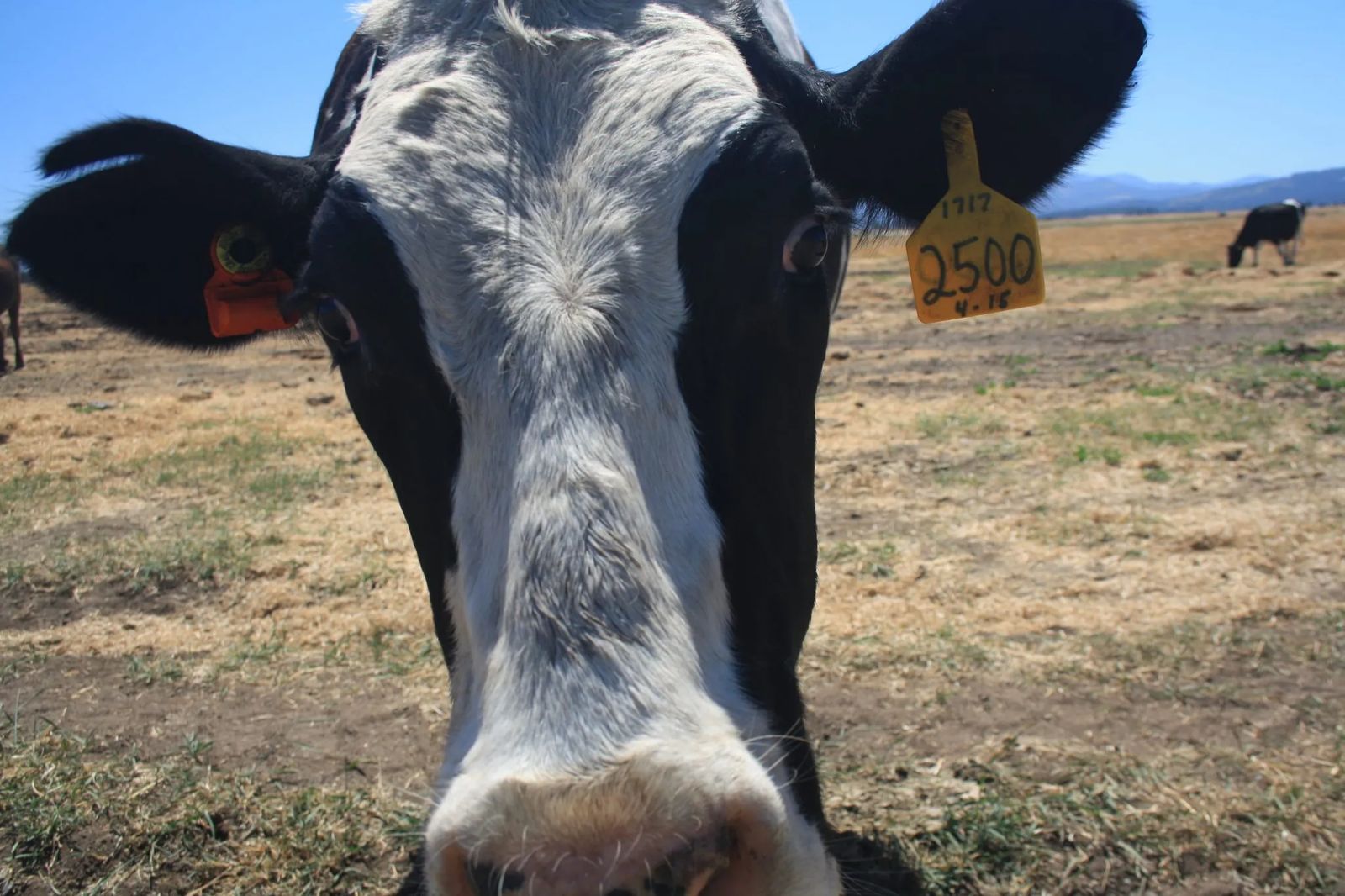 How Kalispell Kreamery landed on the Montana Dairy Map

Necessity is said to be the mother of invention. So when Hedstrom Dairy of Kalispell faced a dire situation nearly a decade ago, its owners could either reinvent themselves or sell off their cows like most of the dairies in the same situation. The Hedstroms chose to chart brand new waters. 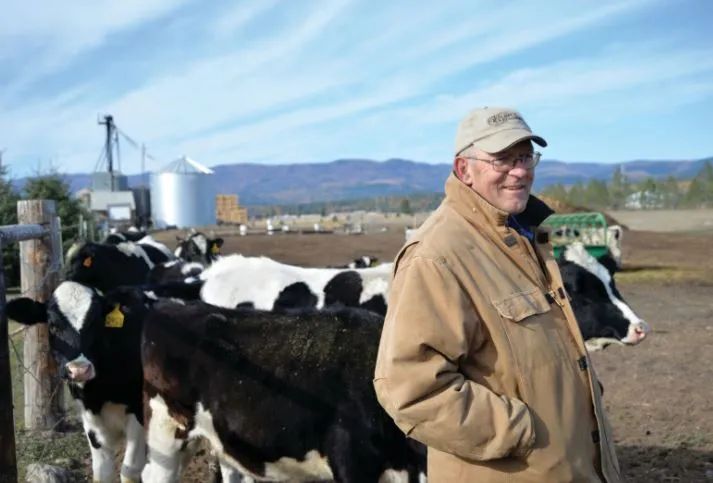 Bill and Marilyn Hedstrom have been a fixture in the Flathead Valley since 1971, rearing their family on the farm where they also raised and milked 200 Holsteins, before selling their milk to the local dairy co-op. When a larger dairy operation stepped into the picture, the co-op informed the Hedstroms it was no longer feasible to send a truck to their dairy to pick up the milk. Since the operation wasn’t in the position to transport milk, the circumstance led to a critical decision for the future of the farm the family all loved.

Instead of selling their beloved cows and vying for an early retirement, Mary Tuck, the Hedstroms’ daughter, says the family literally planned out the future of the dairy — and the creation of Kalispell Kreamery — on a napkin on the kitchen table. In 2010, the family created the creamery a mere 20 feet from the milking barn, making it one of the most unique setups in the country. The company’s slogan shared the vision, “From moo to you.” 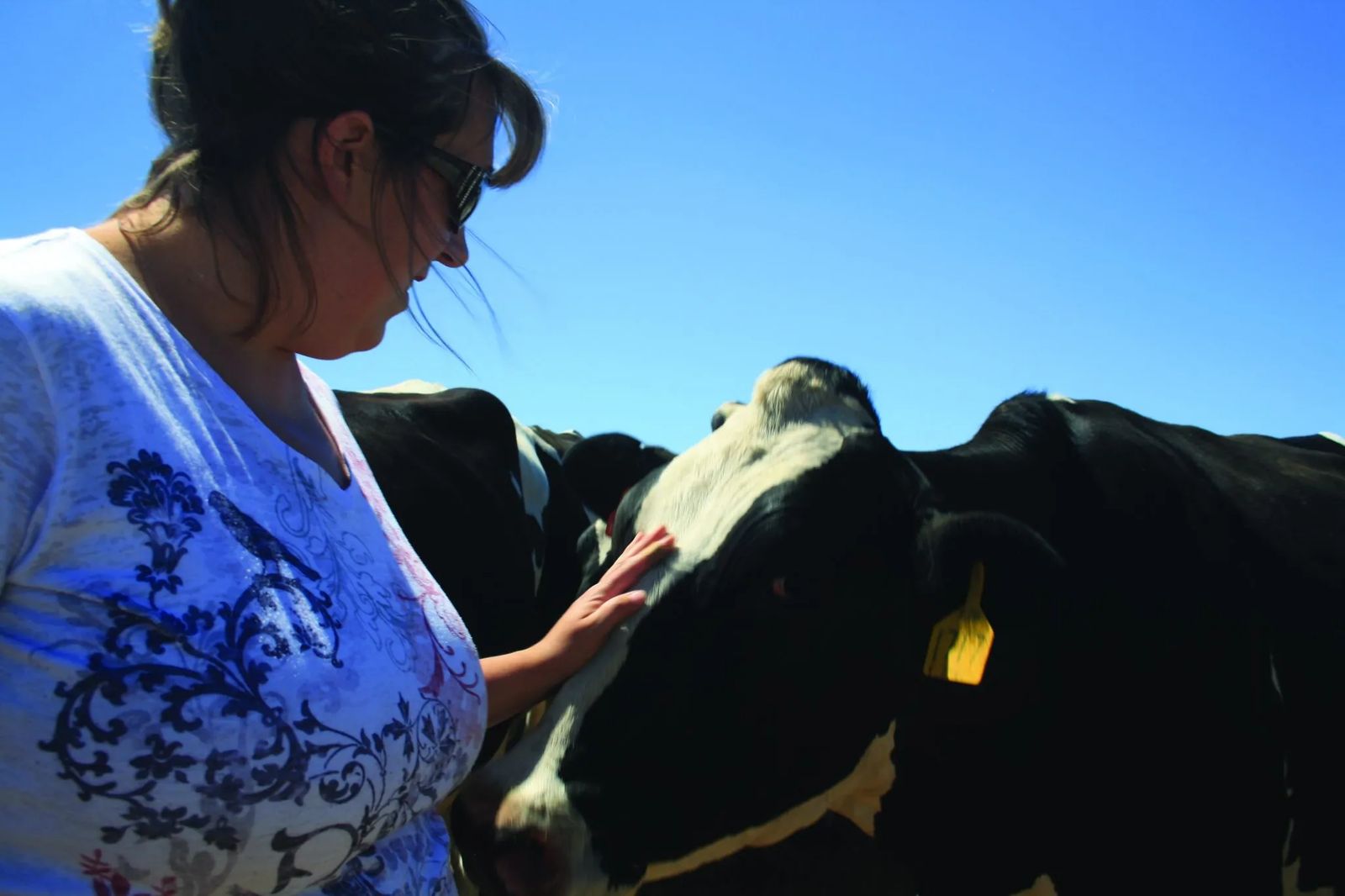 “We call it the perfect storm,” says Mary Tuck as she shares how all the factors seemed to fall into place with her and her husband, Jared Tuck. It was not only the right people at the right time, but she says the community and the cows all fit perfectly into the equation.

“We were in a unique position to create our own market,” says Tuck. “We saw a niche.”

No one else in the Flathead was making the non-homogenized cream-on-top milk products, and knowing the community as well as they did, they felt the timing was ideal.

“We knew there was more of a call for local foods,” she says, so they took a step back into doing what dairies used to do. They started bottling their milk products straight from their own cows to fill this need. In essence, they reverted to old technology to move into the future. Bill and Marilyn still run the dairy as a separate operation, while Mary and Jared developed Kalispell Kreamery to process all of the milk.

Initially, they didn’t know what to expect when it came to running the day to day operation or even what volume of sales they could plan to produce. 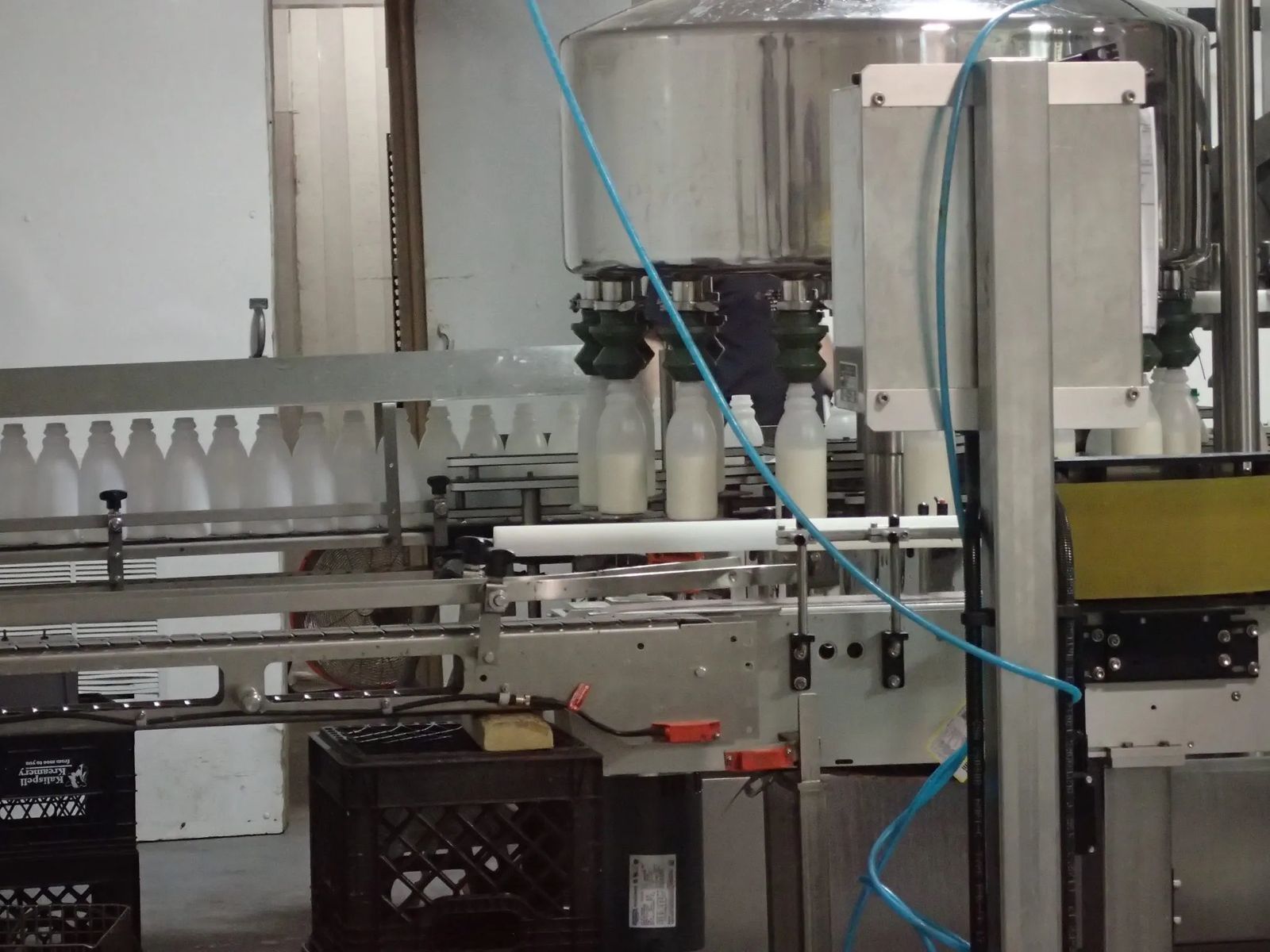 “There’s not a book on how to do this,” explains Tuck. “Every step of the way, we had to think outside of the box. Every decision we make is based on our instinct and our savviness. Even if there was a book, it probably wouldn’t work for us.”

They found used dairy equipment in Denver, which was installed and re-engineered by Bill and Jared. “The hardest challenge was that my dad couldn’t use duct tape and bailing twine,” Mary says jokingly.

As with many small farming operations, the family had no choice but to be self-sufficient since there aren’t many – or any – people out there with the knowledge on how to repair this type of bottling unit used by a small dairy. “There isn’t anything here that couldn’t be fixed by my husband or my dad,” she says.

Even though they are a small creamery in the grand scale of things, it doesn’t mean the regulations they need to meet are any less restrictive. Somewhat tongue-in-cheek, Tuck says they have higher standards than NASA. She isn’t far off the mark. Anything that touches the milk is made of stainless steel, which must always be effectively sanitized. Kalispell Kreamery undergoes constant testing on its milk. 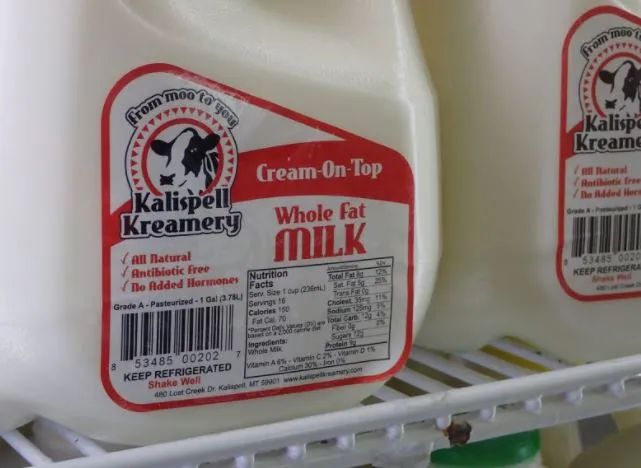 Marketing was another aspect of this uncharted territory. “I was brand new. I didn’t know what I was doing,” Mary says. Tuck cold-called Rosauers grocery store, a grocery chain with 22 stores all over the inland northwest, and asked them to give them a try. Mary explained how Kalispell Kreamery produced a niche, cream-on-top milk with an average price point. Rosauers took a chance, and soon other grocery stores were calling them.

It didn’t take long for locals to love their milk products. Fans from all around the state clamor to have it in their stores.

“We had to upsize to a semi and semi-trailer to handle this,” she says, as well as enlisting distribution companies throughout the state to bring Kalispell Kreamery products to markets beyond the Flathead Valley.

These days, there’s always activity on the farm. It takes four hours twice a day to milk the roughly 275 active cows. Tuck says they keep a herd of 300, but allow the others to go dry three months prior to calving, which they do throughout the year to maintain production. The milk goes directly from the milking barn to the creamery, where it is bottled according to its fat content ranging from whole milk, with a thick layer of cream on the top, to 2 percent, and skim milk. They also offer half-and-half, and a whole cream that will delight any cook who remembers how well cream used to whip.

Made with the three simple ingredients of milk, cocoa and sugar, Kalispell Kreamery’s chocolate milk is a favorite for those with a sweet tooth. The Tucks are adamant about keeping everything as simple and natural as they can.

This includes making Greek yogurt the old-fashioned way by straining it for 12 to 18 hours, before adding the honey or other flavoring. Tuck says this means they don’t have to add ingredients such as corn starch and carob bean gum to thicken it. It’s a very artisan process that Tuck says requires a couple of days for them to complete. The result is an absolutely delicious, although not light product. It boasts 412 calories in its 6 ounces of goodness for the honey yogurt. And, since the honey and plain yogurts have been so popular, the Tucks are working on adding a strawberry flavor to the lineup. 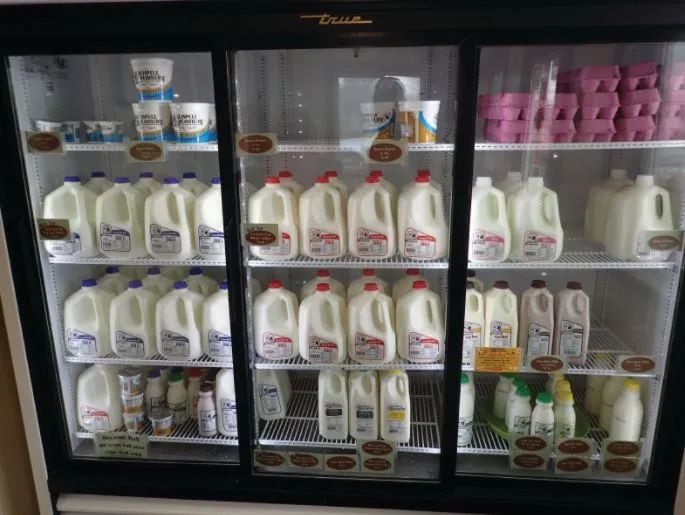 “It’s a slow process,” Mary says. “We’re starting from the ground up with every new product.”

After the strawberry yogurt is in production, she says strawberry milk will most likely join its chocolate counterpart.

Since reaching beyond tradition is a trademark of this industrious crew, Tuck says they partnered with Montana Coffee Traders to create a truly Montana pick-me-up, a cold brew coffee pint.

“We thought it would be really good to partner with another Montana based company,” she says. “We do milk. That’s what we do. We depend heavily on Montana Coffee Traders because they’re the coffee people.”

While Kalispell Kreamery handles the bottling and production end, Montana Coffee Traders helped create the formula, plus they handle a lot of the selling, and help maintain quality. With a creamy flavor and a hint of sugar, it is a Montana worthy beverage.

With all of this on the docket, the creamery end is as busy as the dairy. Tuck says they bottle all sizes of milk four days a week and it makes yogurt for two days leaving a day for deep cleaning and repairs.

A new bottling unit replacing the vintage model is making life easier for their crew. “We were hand labeling everything and the pints were taking too long. It’s more consistent,” Mary shares.

The main reason their milk and milk products taste so good is because of the cows. They are on pasture during the warmer months along with an alfalfa and grain mix throughout the year to ensure proper nutrition and a balanced flavor. Tuck says that while they try to be as natural as possible, they are not certified organic since the regulations surrounding the process would make their products cost prohibitive. They feed their cows quality hay and grain, and it shows in the end product. 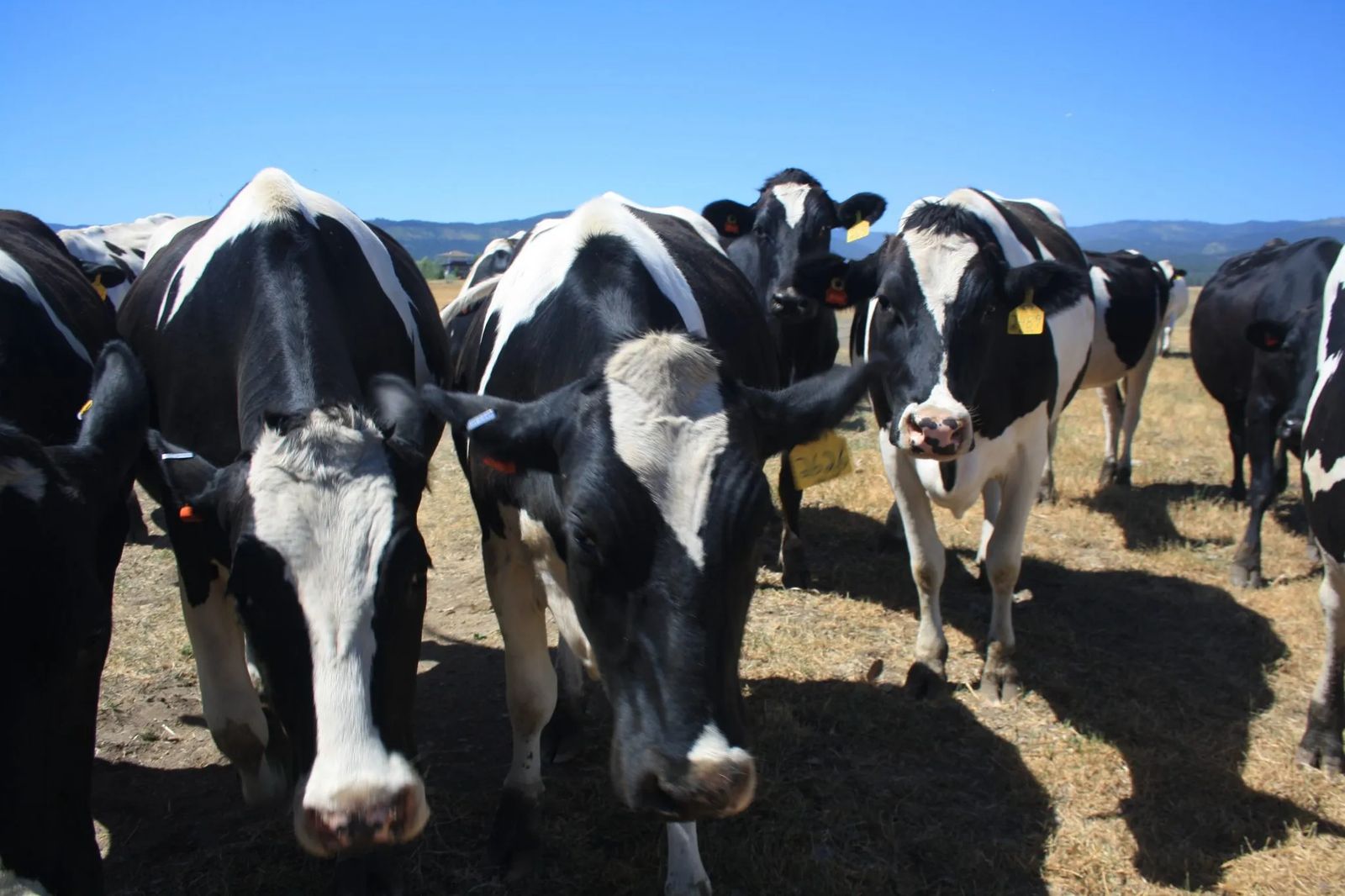 Caring for the cows has been Bill Hedstrom’s calling for more than 40 years, and while he can look at a cow and tell if she is not feeling well, Tuck says they had to create a system where anyone could monitor the herd’s health. Marrying this age-old skill with new technology, they use an electronic tag on each cow that notifies them of their temperature, eating habits, activity levels, as well as indicators to tell when a cow is coming into heat. By receiving this information, the family can be proactive in their care and herd management.

In an era where family-run agricultural is a threatened species, Kalispell Kreamery is an example of how innovation can propel an industry toward new ways of meeting the needs of customers who appreciate what local food has to offer. Instead of losing another dairy farm, Montanans are blessed that Kalispell Kreamery can give us so much more delicious dairy to enjoy for years to come.

WANT TO KNOW WHERE TO FIND KALISPELL KREAMERY PRODUCTS? Visit kalispellkreamery.com and click on Distribution for a list of Montana retailers.