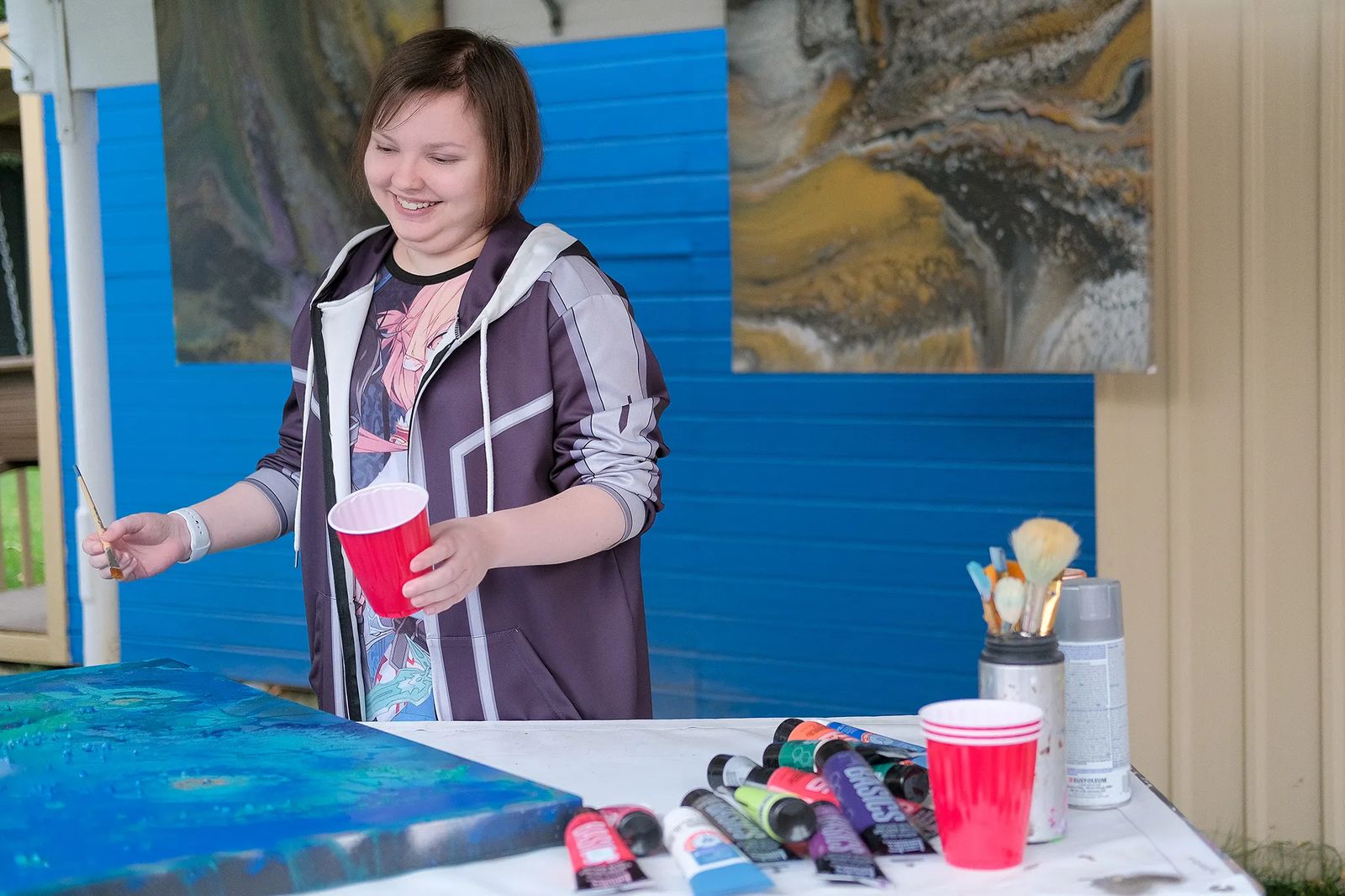 Rylie Kaiser knows she’s a lucky young woman. While hanging several large paintings for her seventh ArtWalk appearance in late 2019, Rylie, who signs her work “BunnyK,” had her mother, Kim Kaiser, by her side. Kim reserved the downtown gallery and handled the all the details for Rylie’s show.

During the ArtWalk, the two greeted family, friends, colleagues and visitors with smiles, hugs and laughter. Energy from Rylie's multi-colored “pour” paintings reverberated through the gallery and by night’s end, she had sold five of them.

Her art is explosive, colorful and attention-grabbing. The colors that flow through each piece have brought Rylie comfort during her healing journey. At her young life, she’s already endured two bouts of cancer, difficult treatments and a diagnosis of epilepsy. 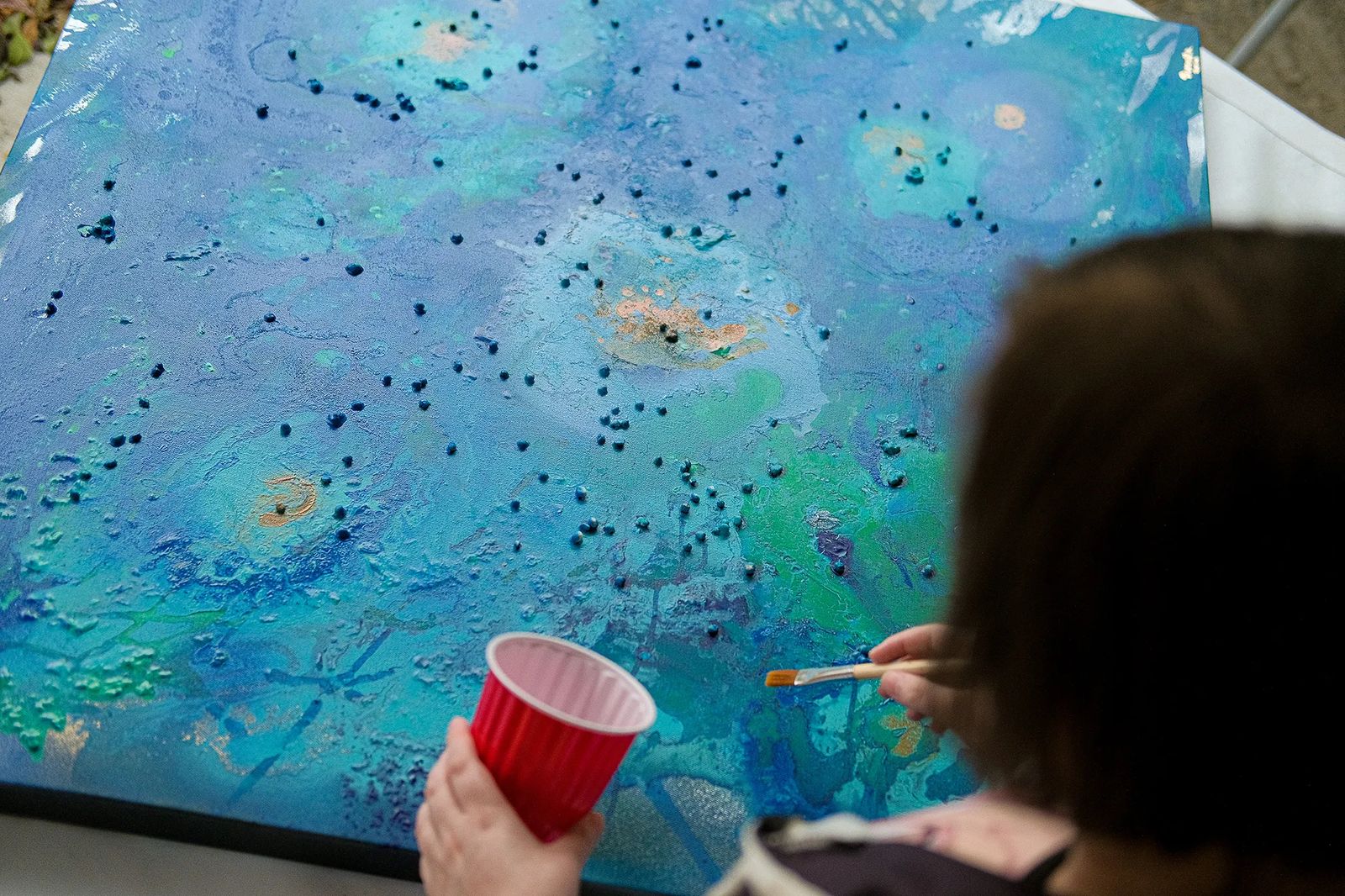 YOU JUST DO IT

Rylie was a month away from her fourth birthday in 2002 when antibiotics failed to kick a low-grade fever. Her pediatrician ordered a blood test.

“This might be leukemia,” the pediatrician told Kim. She remembers him bolting into the exam room and saying. “We need to get Rylie to Denver NOW!” Doctors in Denver confirmed the diagnosis.

Kim says she felt clueless about how to juggle her career with Rylie’s health needs. She’d graduated from Montana State University-Billings just two years earlier. Neither she nor her husband, who’d just changed jobs, had significant savings, sick leave or vacation time. They had another child at home and needed both incomes to make ends meet. When it came to travel, Kim’s vehicle wasn’t what she called travel worthy.

Kim knew the ravages of cancer. It had claimed the lives of her father and uncle. Working for the American Cancer Society (ACS), she interacted with cancer survivors and families and friends left behind by those who didn’t survive. It was her job to coordinate events to raise cancer awareness and money for research

After Rylie’s diagnosis, Kim and her daughter spent the next 18 months traveling to Denver and back every other month. Thankfully, there were times that Rylie’s chemotherapy, biopsies and treatments were done at home. Even so, Kim did much of her ACS work remotely — before Wi-Fi and smartphones. Rylie endured the travel, nausea, exhaustion, vomiting, isolation and mood swings like a trooper, but Kim recalls the whole family experiencing a “rollercoaster of emotions.”

During one Denver hospital stay, mother and daughter were watching “The Wizard of Oz,” Rylie’s favorite movie. A gift arrived and within the package for Rylie sat a pair of sparkling ruby-red slippers just like Dorothy’s. Rylie slipped the shoes on her tiny feet and clicked her heels together.

Kim was devastated. She knew the statistics. Children with leukemia have an 80 percent survival rate in the first five years. The survival rate drops to 40 percent if the cancer returns.

At the end of her first round of treatment, doctors thought Rylie was “all clear.” But in the fall of 2003, the Kaiser family discovered Rylie’s cancer was back. Hospital stays meant movies with Mom, coloring and crafts between chemo, low blood counts, fevers, IVs dripping with medication and the ever-present fear of infection. Rylie spent Christmas 2003 at St. Vincent Hospital. Between March and June 2004, she underwent a bone marrow transplant, followed by a full body and brain radiation in Minneapolis, with two more years of check-ups afterward.

During Rylie’s second cancer battle, her sense of color began to emerge. One day, the Montana Hope Project delivered a playhouse for Rylie on a big flatbed truck. To all who had gathered, Rylie announced her color selections. “Pink and green for the bedrooms, a yellow kitchen, a blue dining room and the rest in fabulous grape with rose trim!”

Those moments were the joy during some very rough years. Because of Rylie’s suppressed immune system, her elementary school years meant social isolation. The effects of radiation made schoolwork difficult. In middle school, things began to shift. Rylie attended Billings Education Academy where her self-esteem and individual strengths grew. Art was woven into every school day. 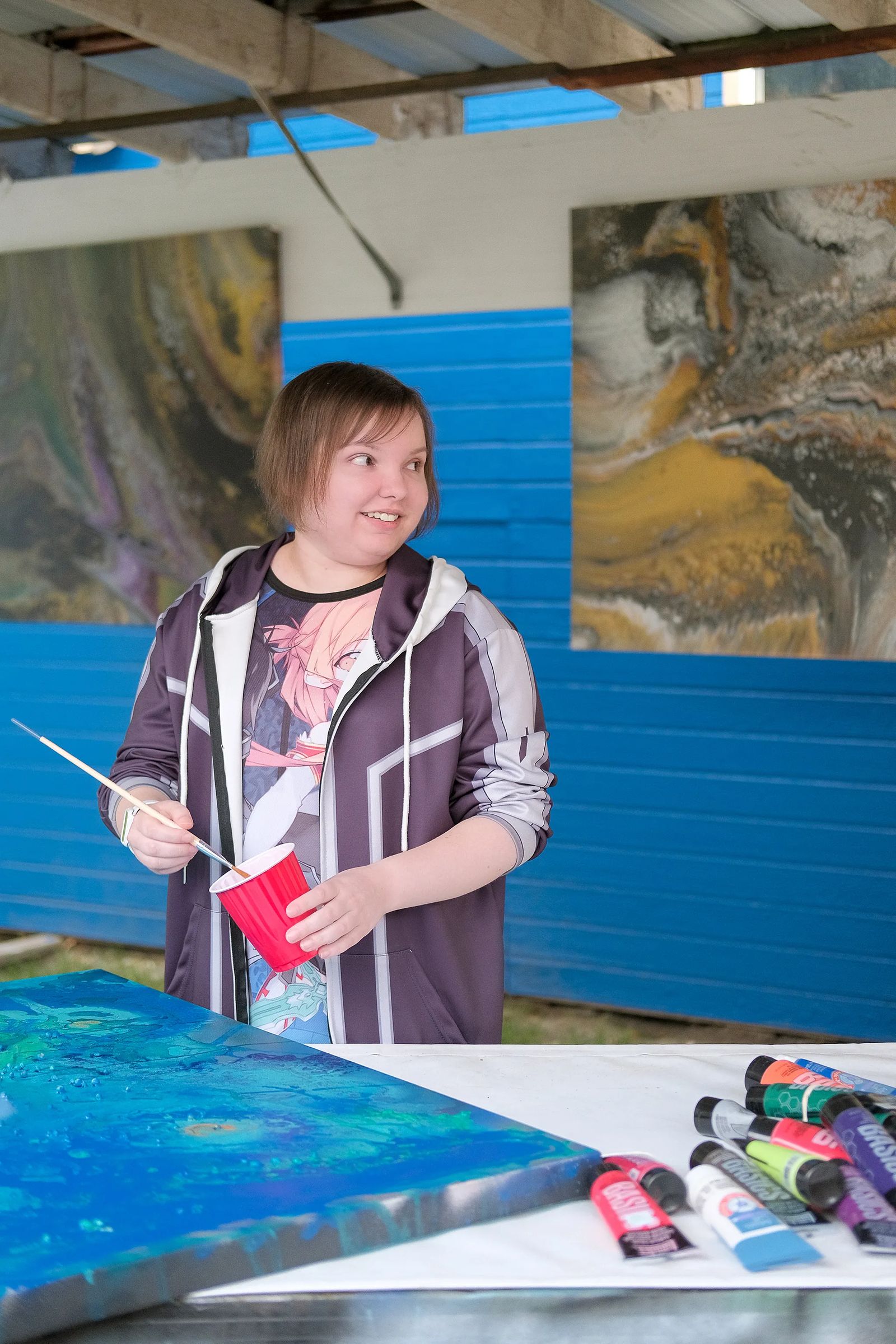 Kim connected Rylie with Ruby Hahn, who was, at the time, an MSU-Billings art student. The duo shared ideas and techniques for their “pour” paintings and envisioned a joint ArtWalk appearance. Rylie refused to let her first grand mal seizure, which came unexpectedly in 2017, set her back. The ArtWalk show went on.

Over time, Rylie developed friendships with her patrons and acquired a “following” in the local art community.

“When strangers admire Rylie’s art and purchase it, her sense of purpose and self-worth get a big boost,” says Kim. “She’s faced more adversity in her 20-some years than many people face in a lifetime.”

Rylie dreams of a “she shed,” where she’ll have a dedicated space for her art and woodworking. It will have room for “Apollo,” her bearded dragon. Kim found her dream job as CEO of the Billings YMCA where she uses her energy, creative thinking and resilience every day.

As Rylie chatted about her art and plans for the future, she paused to look at Kim with adoration and gratitude — the way all mothers wish their daughters would look at them. She knows she’s had one of the best partners to help her succeed in life, with every challenge, every step and every new work of art. “My Mom,” Rylie says, “my Mom has my back.”

Maybe those ruby slippers worked after all.