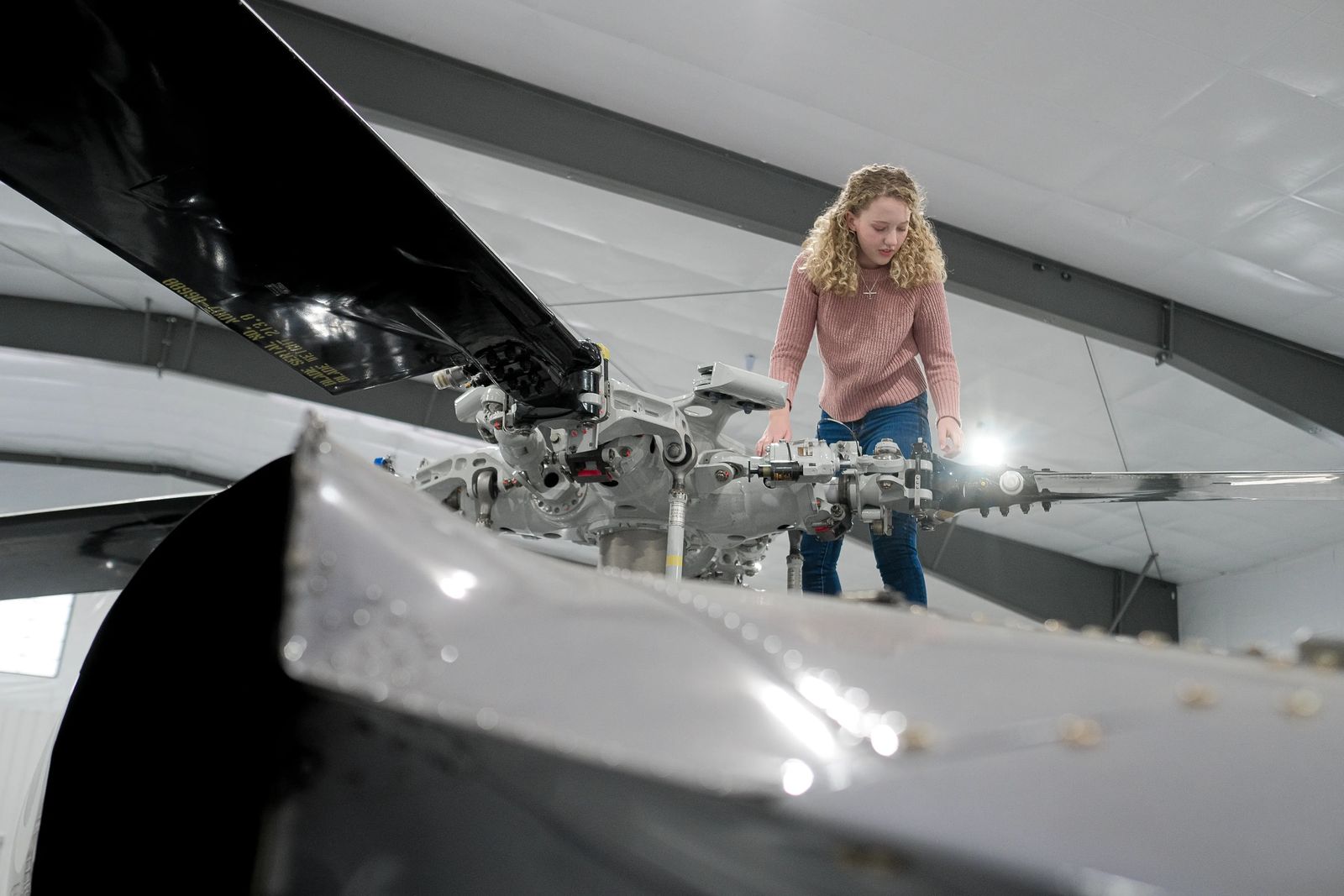 The thought of flying above a raging fire, with smoke inhibiting your vision, while being aware of the trees, mountainsides, firefighters on the ground, other aircraft, wind direction and temperature — not to mention a place to drop 2,000 gallons of water below — would deliver an adrenaline rush most couldn’t handle. Not so for Ashli Blain.

“It’s exciting in the sense that I get to go do something that’s unusual,” Ashli says, “but 99 percent of the time our flights are smooth and relatively calm.” Which is what the company she works for — Billings Flying Service — and her fellow pilots strive for.

Ashli began flying when she was 13. She credits her training, much of which happened under her father’s tutelage, to the standards of the company she works for and the confidence she has in the aircraft she flies.

“The first fire of the season is exciting in the sense that we’re back at it,” she says. “After a winter off, we’re back in the saddle. But we’re trained to take every precaution possible and I have tremendous faith in our aircraft and pilots. It’s really never nerve-wracking for me.”

Ashli became somewhat of a celebrity this summer after the media discovered that a 19-year-old was helping to fight one of California’s major wildfires. Along with several publications, she was profiled by both NBC and CBS. Links to the stories went viral on Facebook. Ashli stood out because she’s one of the youngest helicopter pilots in the country able to co-pilot both Chinooks and Black Hawks.

Chinooks are one of the largest helicopters built, equipped with twin engines and tandem rotators. They are imposing, making it hard to imagine a petite 19-year-old — one who needs to sit on a cushion to reach the controls — as its pilot.

But, that’s where Ashli spent her summer, helping to battle the Santa Clara Unit Fire. The flames were sparked on Aug. 18 and weren’t contained until Sept. 30, leaving more than 396,000 acres of charred land in its wake.

“It was massive,” Ashli says. “I’ve never seen anything like it. It was a continual rush the entire time.” 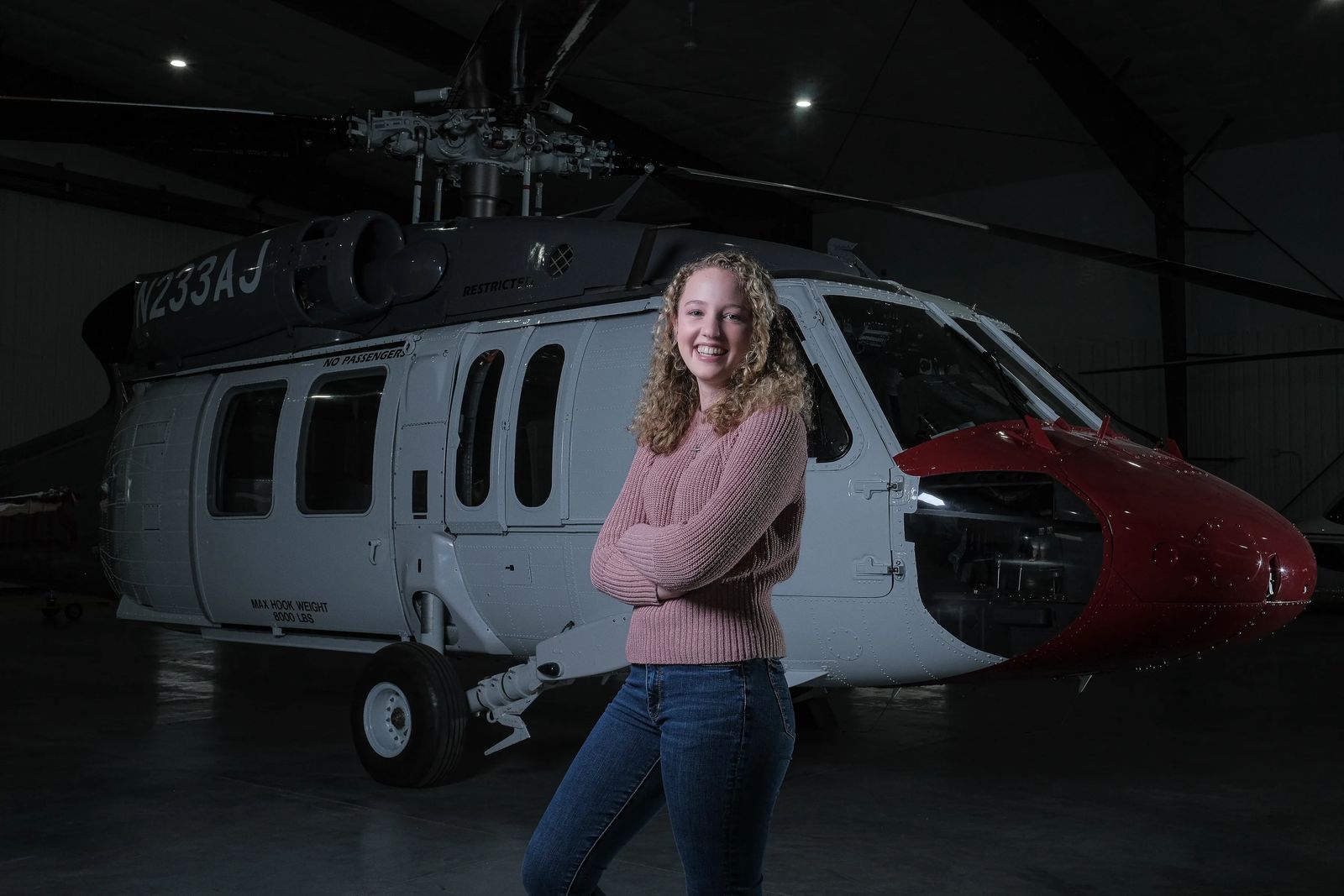 During a fire, it’s the pilots’ job to not only maintain control of the chopper but to lean out of the aircraft to line up the 2,000-gallon bucket, dip it into a water source before taking it to just the right spot of a fire. As a rated co-pilot, Ashli serves as an invaluable second set of eyes, constantly keeping watch on the controls and the environment. This wasn’t the first summer she’s done this. It was her second.

Ashli is a third-generation pilot in her family. Her father and uncle own Billings Flying Service, a company launched by her grandfather, Gerhart Blain. Several cousins have made careers out of flying. It’s easy to see why growing up around planes and helicopters helped pique Ashli’s interest. By the time she was 13, she started flying a glider plane. By her 14th birthday, she soloed her first flight.

“I love glider planes,” Ashli says. A glider is hooked up to another plane which lifts it into the air and releases it when it reaches the desired altitude. “I learned to fly in Southern California and it was a thrill from the first time.”

After those first years of flying a glider, Ashli went on to pilot multiple aircraft adding new licenses every year. Just six years into her career, she has licenses for private single-engine airplanes, instrument airplanes and private multiengine airplanes. She also has commercial helicopter and instrumental helicopter pilot licenses and a certified instructor’s license as well.

Right now, however, it’s the helicopter piloting that has everyone’s attention. She’s rated as a copilot for the Chinook and is one of the youngest command pilots for the Black Hawk. She earned that license when she was 17.

“My interest in flying helicopters started around 13. I started trying to convince my dad to teach me,” Ashli says, adding that her father, Gary, has been flying helicopters for more than 30 years. “He finally said that if I could find a UH-12C Hiller (old, affordable and can be fixed up) that he’d teach me.”

She found a 1952 model and together she and her father fixed it up before she was able to fly it for the first few years. It fueled her love of aviation. To keep flying, she was homeschooled through high school and spent every available minute pursuing each one of her licenses. Today, she’s been all over the world with her family’s business and has more than 1,400 flying hours under her belt.

“It’s been really fun flying with such experienced pilots,” she says. “I have tremendous respect for all the guys that are fighting fire.” Ashli says she watched many of them work 12 days on and 12 days off just to make an impact on a fire line. “It’s a grueling schedule and takes a lot of stamina. When you’ve been flying for eight hours on a fire, it takes a lot out of you.”

As passionate as Ashli seems to be about flying helicopters, and as much as she loves the world of aviation, she’s a freshman studying accounting at Rocky Mountain College.

“I know,” she says with a laugh. “It’s a different world as far as excitement, but I love my classes and my teachers. I wanted to be able to fall back on another career in case aviation doesn’t work out.”

The youngest of three girls, Ashli spent her childhood romping around her parents’ acreage south of Billings. She raised chickens and had a thriving egg business. As she homeschooled, she also worked for Caring Hands Veterinary Clinic, helping with the animals, and considered vet school before the lure of aviation and accounting took hold.

“I loved working with the animals, and I have such respect for the veterinarians there,” she says. “I could have gone that route, but at some point, I had to make the choice because I knew I couldn’t do both.”

Today, she feels fortunate to be doing what she loves.

“It’s hard work,” she says, “but I’m lucky to have found something that I am passionate about so I’m willing to put the work into it.”