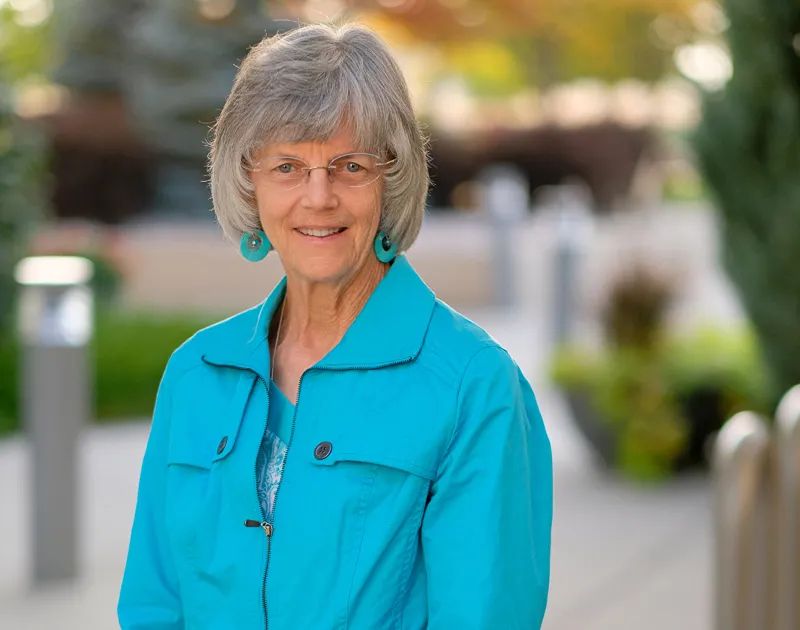 Grieving at the Holidays

Pam Strong helps others cope with the emotions of loss

The Christmas holidays can be the most difficult time of the year for anyone grieving the loss of a loved one.

If you are one of those people, Pam Strong feels your pain.

Pam, 70, not only coordinates the local Grief Share program at Faith Chapel in Billings. She has experienced grief almost beyond comprehension, losing her husband and two of her three sons over a period of 4-1/2 years, starting in 1995.

Her husband, Gary, and son Nathan both died after lengthy illnesses. Son Joshua died suddenly after he sustained a head injury. Both Nathan and Joshua were 18 when they died.

These days, Pam finds joy sharing life with her surviving son, Andrew, 38, and his wife, Jennie, along with their three daughters, who “bring hope and light and love to my life.” She also facilitates the biblically based grief recovery group, something she’s done for 17 years.

“Grieving is hard work,” Pam says. “The more you deal and work on that, the quicker and the more resolution you’ll find.”

When faith is woven into that healing, “you grieve with hope,” she says. 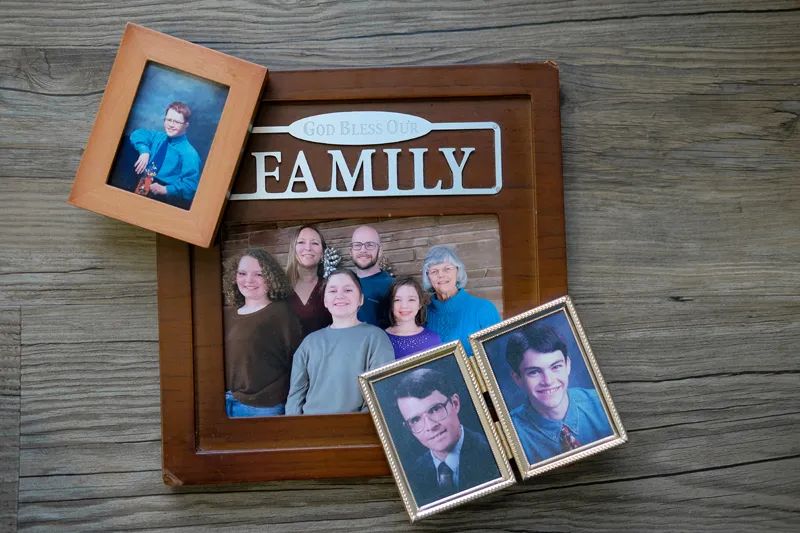 She and Gary married in 1971. By 1978, he had completed dental school and she had earned a degree as a registered nurse.

“I helped him with getting his office going and then I got pregnant,” Pam says. Nathan, born with Down’s syndrome that same year, dealt with health issues throughout his life, though that didn’t him from finding joy in his family, friends and faith.

Then, in April 1982, Gary, busy with his practice and home and church life, was diagnosed with a rare blood cancer and given an estimated 10 to 13 years to live. During that same time, Pam discovered she was pregnant with Andrew, an unexpected blessing, she says.

Nathan had open-heart surgery at age 7, and in 1987 he nearly died. Pam says it felt like she and Gary lived with the threat of death and dying hanging over their heads, though they did all they could to keep it at bay. Gary finally lost his battle in April 1995, and Nathan, in 1997, two years and four months after his father.

Joshua was a freshman at Oral Roberts University in fall 1999 when, while playing basketball with friends, he fell and hit his head, dying within days from his injuries. Though she had had time to prepare for Gary’s and Nathan’s deaths, Pam says Joshua’s sudden death was devastating.

During that time, she held onto three thoughts: God is true, God can be trusted, and Josh is happy in heaven.

“Those three things got me through a long way,” she says.

Pam’s extended family and her friends also provided tremendous emotional support during that time. Andrew, who graduated from high school in 2001, went to ORU while Pam, still in Billings, attended the Yellowstone Valley Bible Institute at Faith Chapel.

“We were both in college and I loved it,” she says.

Rev. Gary Matsdorf, one of the church’s pastors, led YVBI and taught classes. He helped Pam dig into the Bible and also helped her work through her grief.

Something else that aided her soon after Joshua’s death was a thought shared by one of her sisters: Ask God to show her his tender mercies. Pam describes that as the little ways God shows “how much he loves you and is caring for your specific needs.”

It might be a butterfly in flight or the words of a song or a scripture, but the key is focusing on the one who provides them.

“Over and over, I saw and experienced God’s tender mercies, both then and now,” she says. “We must intentionally look for them and we will find them.”

In 2004, Pam was asked by Faith Chapel if she would coordinate a Grief Share program at the West End church, and she agreed. Her reason was simple: “I didn’t want to waste my sorrows.” 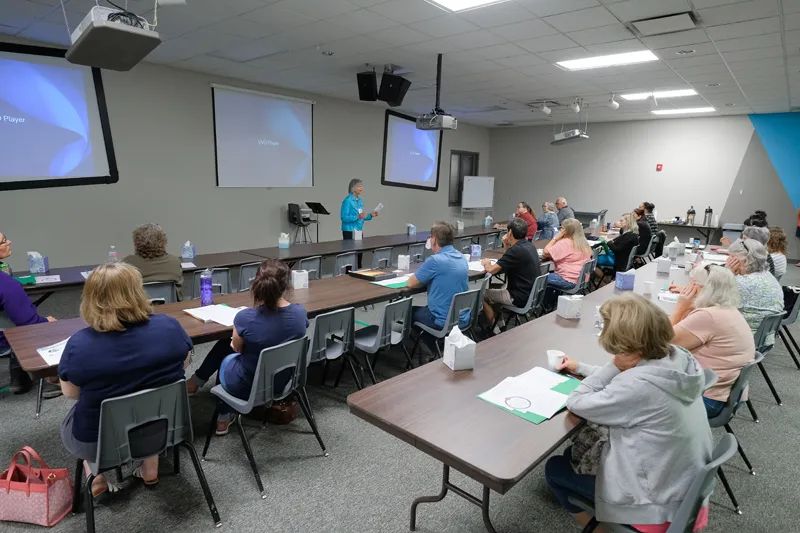 She had learned a lot going through her own grief journey, leaning on God, and she hoped to give others hope that they, too, could make it through.

The sessions run 14 weeks, with a different topic explored each week for 13 weeks and a potluck that celebrates life at the final gathering. Weekly videos featuring experts and other grievers are followed by small-group sessions that allow participants to share with one another.

Week two focuses on the “Tangled Ball of Emotions,” during which participants are handed a ball of rubber bands. As the Grief Share leaders read through a list of emotions, class members peel away one for each that applies to them.

“When they see the huge pile of rubber bands in front of them, they realize they are not just dealing with the grief emotion,” she says. “It’s an amazing visual which helps them understand this significant journey.”

By the third week, Pam starts to see people in the group smiling again. At the 10th week class, people bring a favorite snack their loved one enjoyed and then relate that person’s story.

Journaling is encouraged as another step in the healing process. So is sharing with others experiencing grief.

“Grief comes out sideways if you don’t deal with it,” she says.

It can also ambush people, especially during the holidays and on significant dates during the year, including birthdays, anniversaries and death dates. For holidays, Pam says grieving people don’t have to feel tied to past traditions if they feel overwhelmed.

Instead, they can start a new tradition or maybe just put the old tradition on hold for a year or two. Maybe take a trip. Or make a donation to a cause that was dear to their loved one’s heart, or pay it forward by buying coffee for the car behind them at a drive-through coffee shop.

Grieving is a lifelong process, she says. Life continues and gets easier as time goes by, but the sadness is never completely erased.

“I’m not at the same place as I was, but you never forget,” she says. 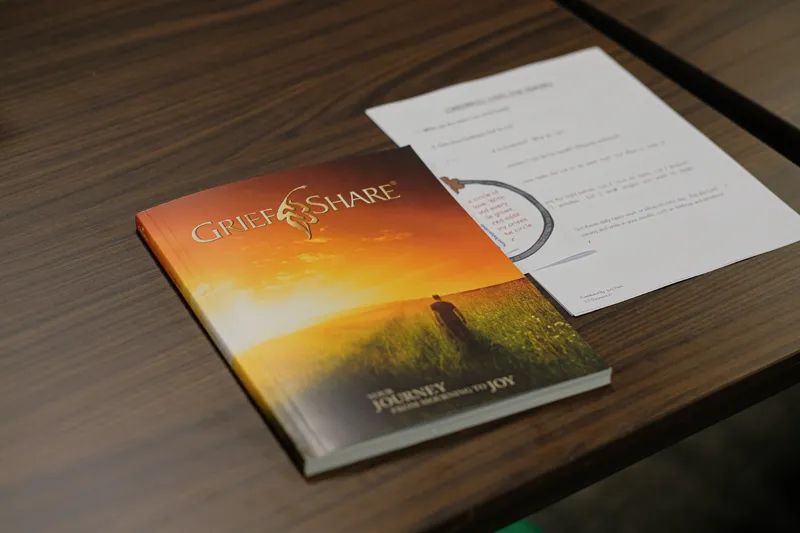 Helping to grapple with the loss of a loved one

The next session of Grief Share at Faith Chapel will begin Jan. 16, and people don’t have to attend the church to take the class. For information, call Faith Chapel at 656-8780 or Pam Strong at 861-4975.

Grief Share offers other resources to people who are grappling with the loss of a loved one. Those include:

People can also receive daily emails sent out by Grief Share, and 48 free videos are available on the organization’s website for parents and grandparents wanting to help grieving children. Find them on the Grief Share website at www.griefshare.org.