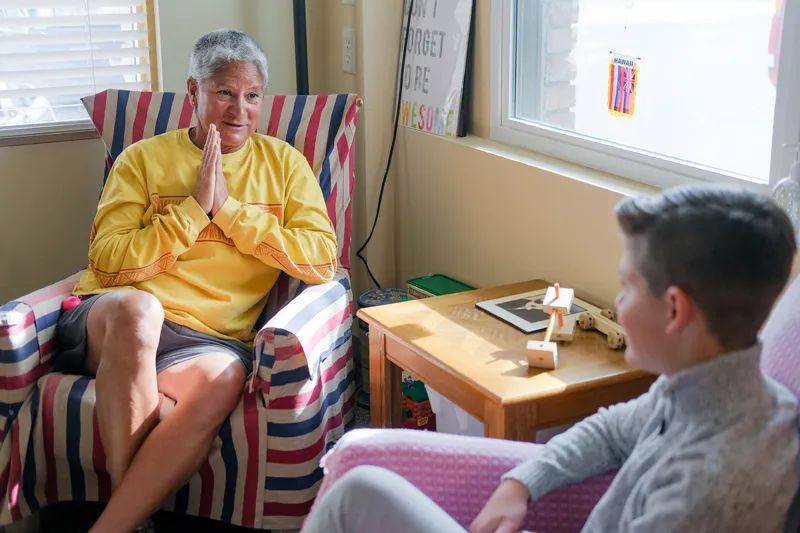 Sitting in therapist Kee Dunning’s downtown Billings office, it’s clear her life is devoted to advocacy and children. Drawings, kids’ activities, letters from clients, posters and cozy furniture fill the room, providing warmth and welcome. As she speaks, her passion is infectious. It’s easy to see why clients like 14-year-old Maclayn Clark love her.

In second grade, Maclayn had begun struggling with extreme depression. He was having dramatic outbursts at home, and by the fourth grade, thoughts of suicide started to play in his mind. He saw a succession of counselors and psychiatrists, and at one point, the family was told Maclayn’s struggles were too severe to be handled in Billings. He was referred to a doctor in Oregon.

Wanting to keep Maclayn close, his family kept searching for the right therapeutic fit for him.

Maclayn recalls the chaos of that season of life. “I just remember that it felt like every day I had a new therapist. I remember the Oregon thing and thinking ‘What’s wrong with me?’” 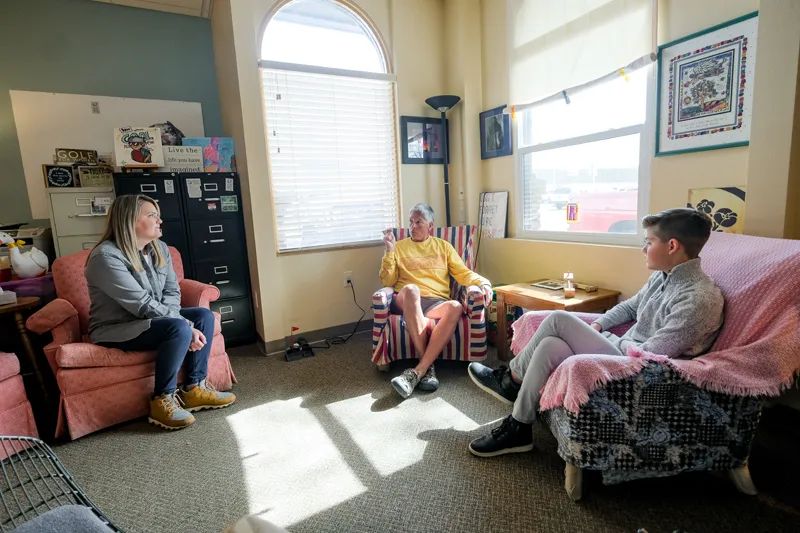 “It was such a blessing,” says Mary Clark, Maclayn’s mother and a science teacher a St. Francis Catholic School. “As soon as we got with Kee, it was like our whole world changed.”

Kee, a psychotherapist specializing in crisis intervention, originally set out to be a special education teacher. She taught for a while before going on to get two master’s degrees, along with several other endorsements and certifications. Since then, she’s worked as a school counselor at Billings Catholic Schools, a case manager at the Mental Health Center, a therapist at the Montana Women’s prison, and an adjunct professor at MSU Billings.

For 16 years Kee worked with Tumbleweed, a nonprofit that cares for the community’s homeless youth. She’s advocated for mental health awareness by doing presentations at School District 2 and for members of the National Alliance on Mental Illness. She currently writes for Forbes Magazine. Once she got into private practice, however, she knew she was right where she belonged.

“I just go where people have asked me to go,” she says passionately. “I believe in my soul that I can love everyone whole.”

Asked why she chose this career path, Kee says it was her calling. “Change begins with families connecting,” she says. “We have to teach people that it's OK to use your words, speak up, be strong in who you are and say what you mean. Those are the things that are so important to me to teach other people.”

Three years ago, when Maclayn was 11, Kee was asked to share her thoughts on youth mental illness with renowned documentary filmmaker Ken Burns. He was serving as the executive producer for a documentary on the topic. Kee asked the Clarks if they would join her in the journey and share Maclayn’s story. Mary’s response was, “I don’t think this is going to be good for our family.” She thought it was a journey meant for just their family and close friends.

When they proposed the idea to Maclayn, he had a different take on it. He asked, “Well, who’s going to see it?” When Kee told him, “I think the goal is for everyone in different schools to see it as well as therapists, doctors, pediatricians. You know, everyone.”

His response was, “OK, well, if it’s going to help one person, it’s worth it. Let’s do it!” He says, “I wanted people to know there are others like me, who are struggling.” Maclayn says his parents didn’t want the project to open his wounds wider and to have him struggle more, “But I just thought that if I’m going through this, then I know I can help other people.” 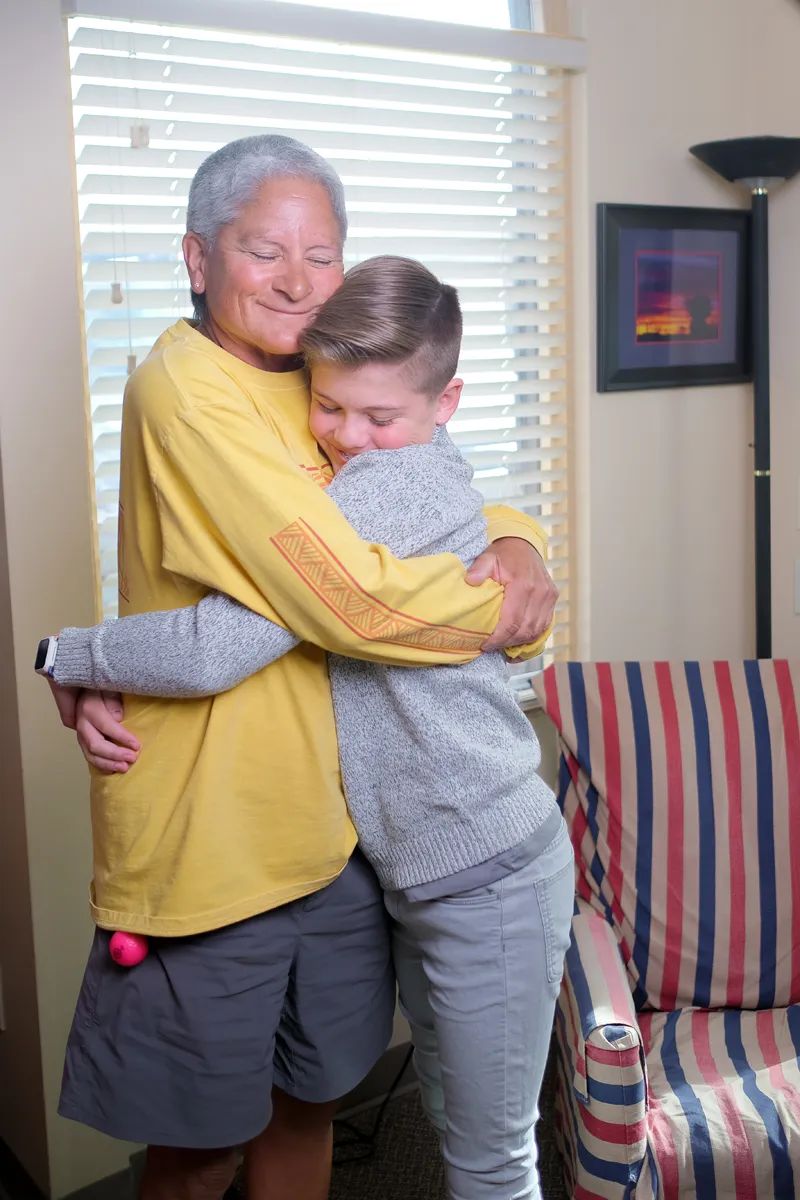 The two-part, four-hour documentary, “Hiding in Plain Sight: Youth Mental Illness,” shares the journeys of more than 20 young people from all over the country, including Maclayn, who have struggled with mental illness.

“The Ken Burns project is about bringing change and awareness to the world,” Kee says. The film will be aired all over the world, including a screening at the White House. The mission is to bring awareness and healing and to encourage people to start talking about the issue by highlighting real people. The film also features Gabe Peaselee from Miles City, who is also a client of Kee’s.

Kee isn’t sure how she got on Ken Burns’ radar, she was just invited. “I guess they saw the work I was doing and invited me into conversation,” she says. That conversation led Kee to be in front of the camera for an eight-hour interview.

“I’m so honored and grateful to have this opportunity to tell the world that we’ve got to do a better job," Kee says, referring to the fact that Montana has been in the top five for the past two decades when it comes to suicide rates.

As the June premiere date inches closer, “I’m excited and nervous,” Maclayn says. “I’m really excited that people will be able to see it and just kind of know there’s light at the end of the tunnel.” He’s nervous about putting himself out on an international stage. “But I want to stay optimistic about it, because it’s going to help a lot of people. That’s all we need,” he says.

“From wanting to take your life to now this journey of strength is amazing,” Kee says of Maclayn. “Maclayn is amazing and stronger than most of us.”

Kee says she’s honored to have the privilege of helping care for some of the community’s most vulnerable.

“All the way along this journey in my life and career in Billings, I have been embraced and really loved on by the people in our community, which I really am grateful for,” she says.

She’s hoping the community supports this powerful documentary when it hits the screen at the Alberta Bair Theater in late June. She wants to fill every seat.

“I want everyone in Billings, Montana, and our state of Montana to see this film,” Kee says. “I want there to be standing room only. I want Billings, Montana, to lead the way for a greater love for all. And I really want to reduce the stigma of mental illness and suicidality. Kids are dying, younger and younger. If we don’t talk about it, the risk is much greater for our kids.”

The film is premiering over the course of two nights —June 27 and 28 — at the Alberta Bair Theater. The documentary gives voice to the experiences of young people who struggle with mental health challenges and focuses on the importance of awareness and empathy. You can get complementary tickets by emailing billings.burns.tickets@gmail.com. Find out more about the film and related projects by visiting wellbeings.org.