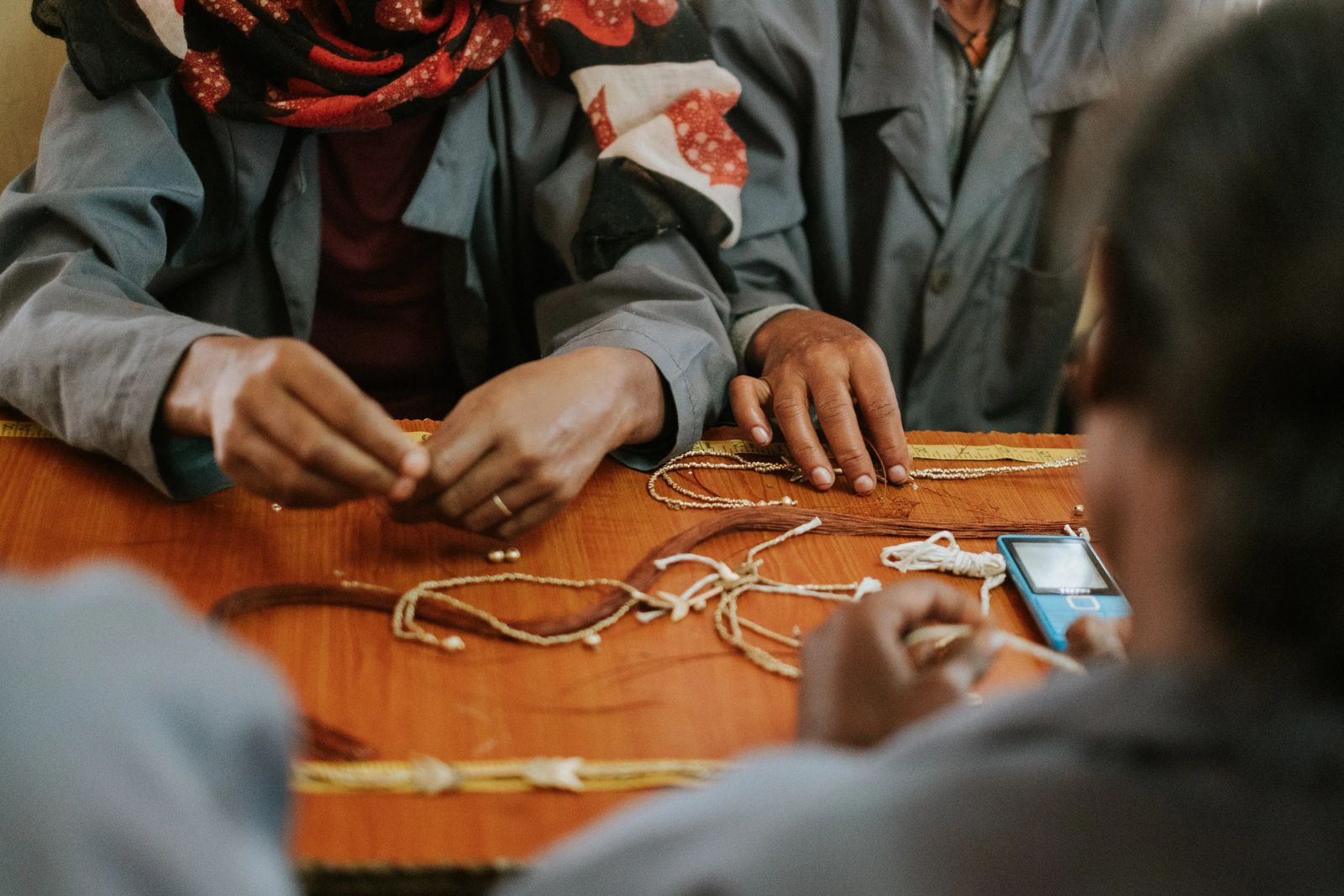 For the Billings couple, a decision to adopt a child from Ethiopia 10 years ago eventually led them to start a business to empower some of the East African country’s poorest residents to help themselves. It was the birth of a business known as MyFight.

MyFight’s mission is to “create a women’s marketplace that connects fashion-conscious consumers with poverty embattled artisans through exotic, fashionable, quality and handmade products.” The business model has broadened from selling items online to individual consumers to marketing items wholesale to retail outlets.

“If we really want to create sustainability, volume is key,” Dave says. “So, we’re trying to sell wholesale.”

For the couple, MyFight is a ministry. Jen, 51, and Dave, 52, are not paid for their efforts. To earn a living, Dave is a CPA with GTUIT, an oil and gas service company, and Jen works part-time as a pharmacist at St. Vincent Healthcare.

Faith informs every aspect of their life. In fact, the pair met at a campus ministry gathering while students at the University of Montana. 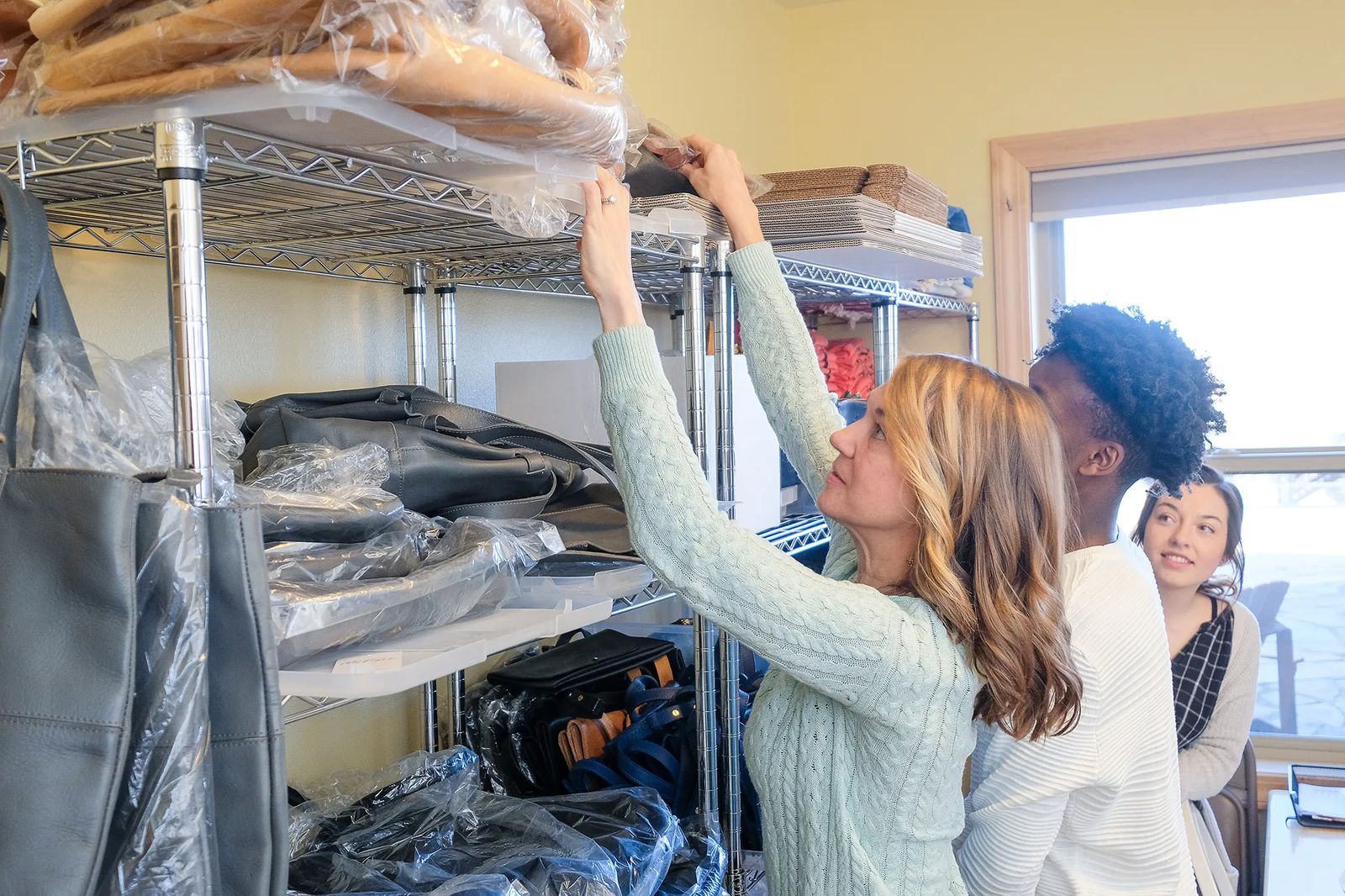 They married in September 1991, moved to Boise and then Connecticut before relocating to Billings, Jen’s hometown, to raise a family. The couple has four children, Hannah, 25, married with one child; Evan, 22, and Emma, 18, both students at Montana State University; and AJ, 16, a sophomore at Billings Central Catholic High School.

It is with AJ that Jen and Dave first connected with Ethiopia. Back in 2010, the pair was among 11 families, all members of Harvest Church in Billings, who decided to adopt orphans from the country.

The church had begun to focus on adoption in Ethiopia, as well as doing humanitarian aid projects in Addis Ababa, the country’s capital. Dave, who was employed at Harvest for seven years starting in 2010, worked initially as the resource officer overseeing finances, facilities and human resources before becoming the director of global outreach.

For Jen, at the time a mother of three, the decision to adopt came gradually as she realized she wanted to add another child to the family.

“We saw a gap in our own family and said ‘Yeah, we really want a fourth child.’”

She remembers when she and Dave first got the referral for 5-year-old AJ, she was driving across the Rims.

“I called Dave and asked, ‘Did you see they gave us a referral?’ I started crying, looking at AJ’s little face,” Jen says.

“It was very emotional, very special when we got that photo,” Dave says.

The couple traveled to Ethiopia in January 2010 to pick up their son, then 6. “They taught him some English words,” Jen says, but at first “there was a lot of gesturing.” 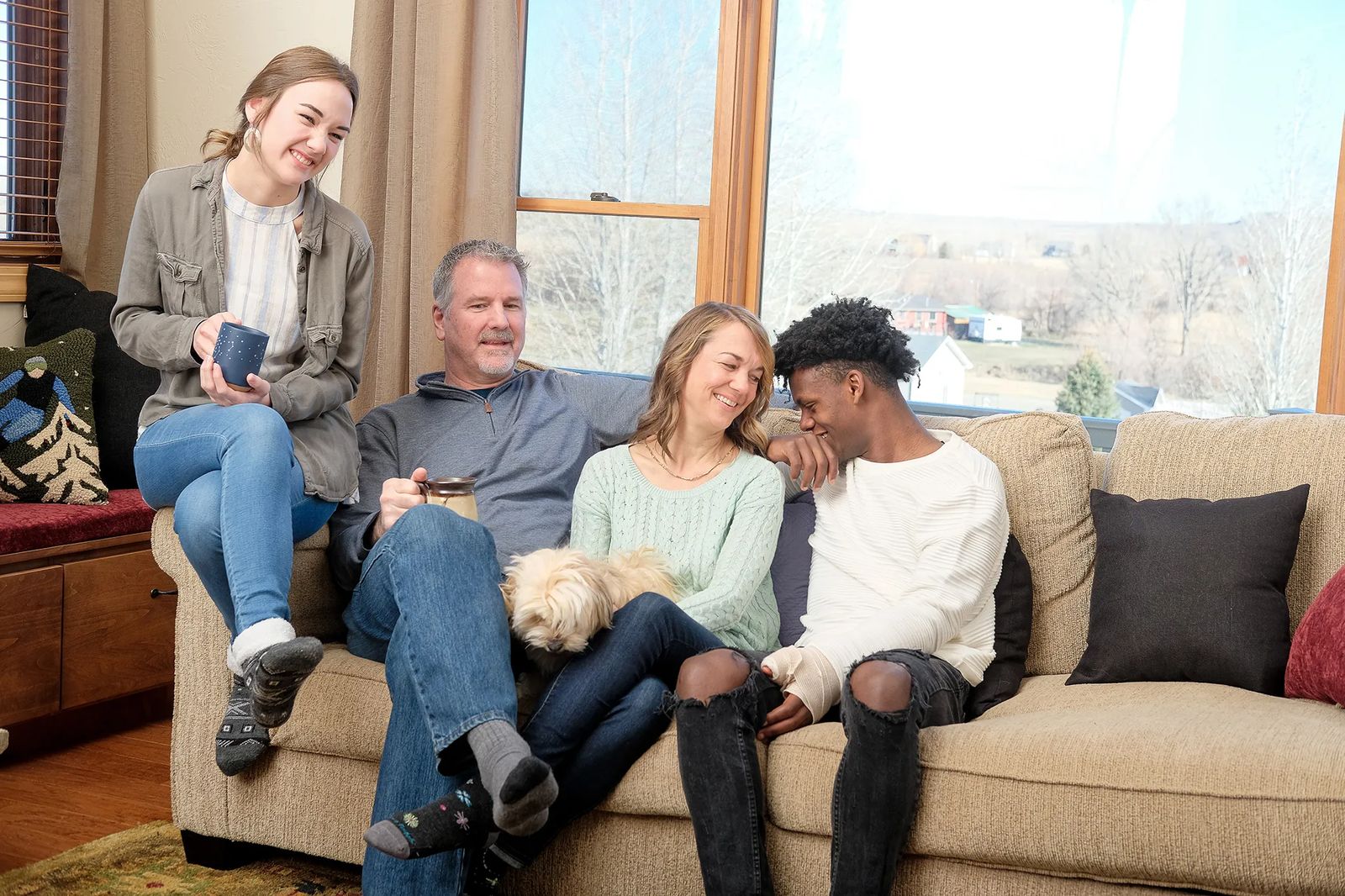 Oldest daughter Hannah came along on the trip and, Dave says, “to this day, she and AJ have a special connection.” He called the trip to Addis Ababa “a trip of discovery” in another way.

"When you see urban poverty in a Third World country, it’s really unsettling,” he says.

Thanks to their driver, Jen and Dave visited Korah, a large slum on the edge of the capital city that sits near a mammoth landfill. The poorest of the poor live there, Dave says, and getting a close-up view deeply moved the couple.

In 2011, Dave returned to Ethiopia with two others from Harvest, and they visited Entoto Beth Artisans, a workshop at Entoto, also on the outskirts of Addis Ababa, another area of extreme poverty. There, HIV positive women make jewelry at a workshop as a means of supporting their families.

The women at the shop repurpose shell casings scavenged from battlefields, turning them into copper and brass beads they made into jewelry.

“In these women, I saw laughter, hope, they had community in a healthy environment,” Dave says. “It gave these women who were hardworking, capable and reliable access to jobs.”

That started Dave and Jen on a journey of creating sustainable employment for these women. Earning a living, not getting a handout, appealed to Dave, a businessman.

When he returned home, he put together a business plan and then got the OK from Harvest’s church council to develop the for-profit enterprise. Several others came on board as investors.

“They understood this isn’t just a business, it has multiple impacts: financial, social and spiritual,” Dave says.

Dave and Jen began to work with Jesse Murphy, founder of MyFight, a ministry that, with donations and profits it earned from selling T-shirts, offered, micro-loans to Third World entrepreneurs.

“Jesse was having a hard time with sustainability, plus there are a lot of micro-finance organizations out there, so we started talking,” Dave says.

Moringa Tree LLC launched in 2016, with Dave as the CEO. The idea was to introduce talented but impoverished artisans in Ethiopia to markets in the Western sphere.

The two organizations merged, with MyFight adopted as the name most identified with the organization. At first, the idea was for the new company to create a workshop of its own in Ethiopia and hire artisans. But with workshops already in place, Jen says, that seemed redundant.

MyFight could serve another function.

“Entoto has a website, but you can’t buy items online,” she says. “We could create a website, so people could go online in the States and buy their products.” 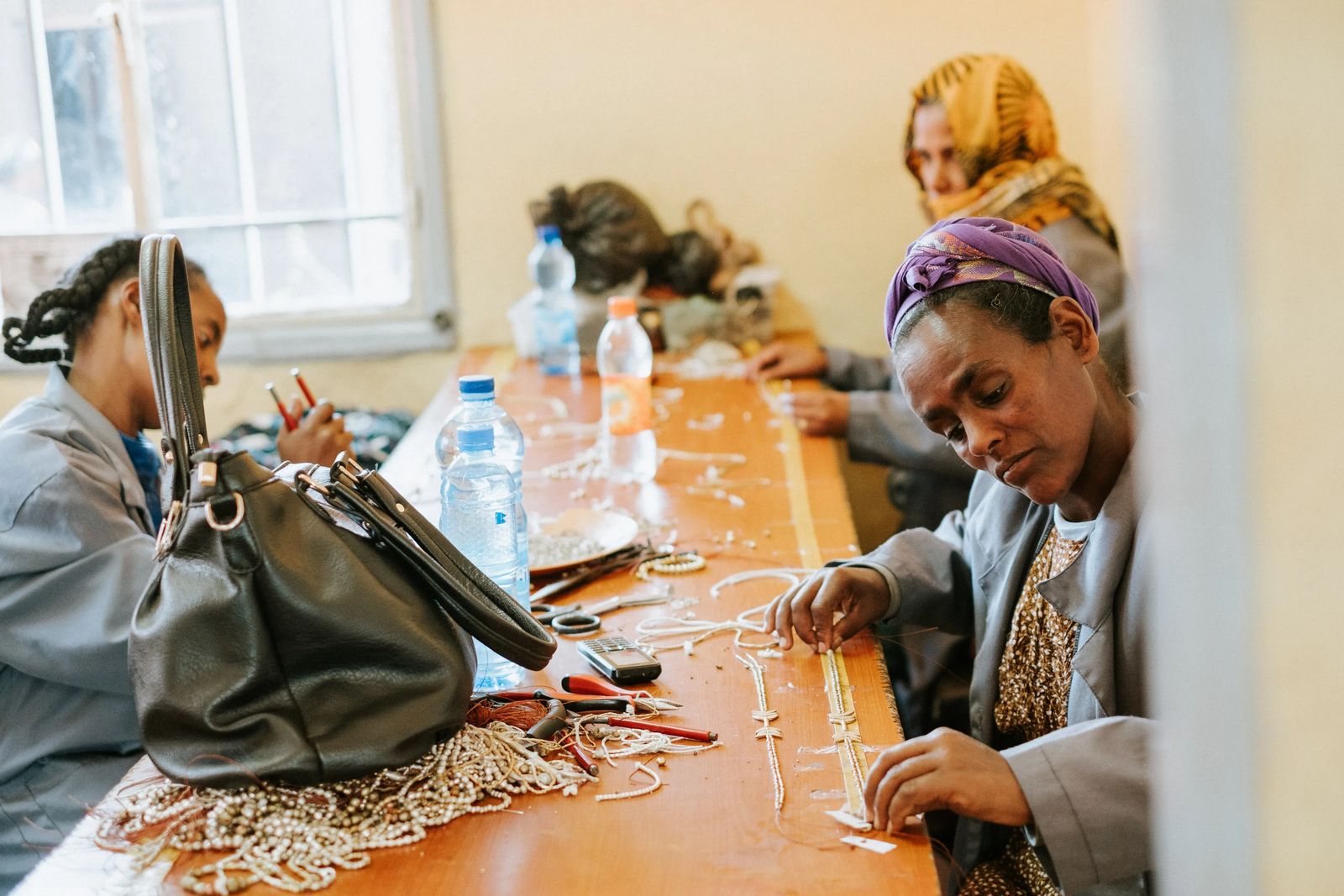 Jesse left in 2017 when marriage took him out of state. Over time, MyFight expanded the number of workshops it collaborates with, including some from India.

“We’re in direct contact with these workshops,” Jen says. “It’s not nebulous. We’ve been to their workshops, we know them.”

The venture has been a leap of faith for the Ulrichs and the other backers, Jen says, with more losses than profit.

At one point, Dave told a board member about his feelings of self-doubt. 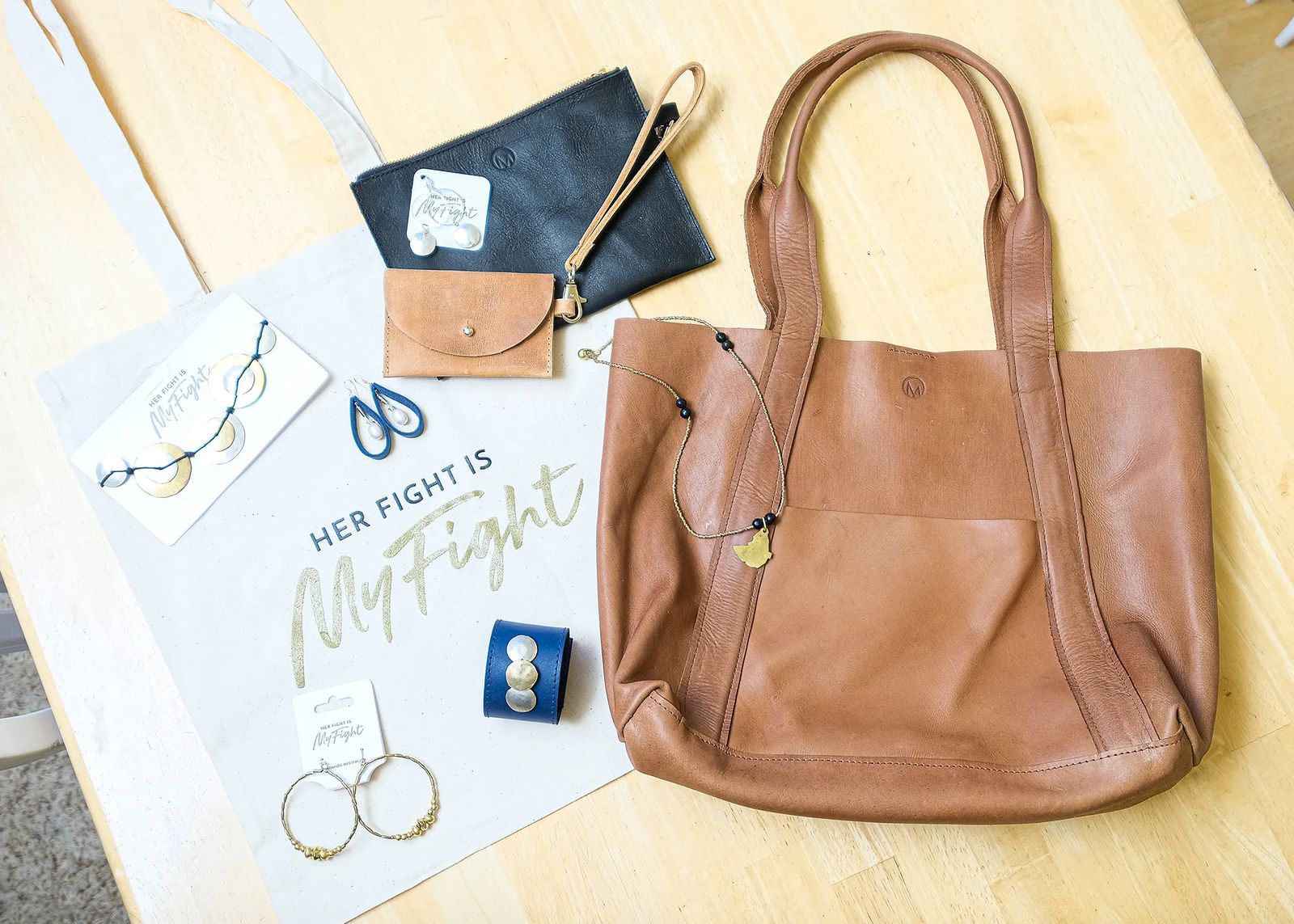 Toward that end, MyFight eventually shifted solely from online sales to selling wholesale. Thanks to a trade show in Las Vegas, Jen and Dave connected with a sales rep with a network of national retail chains. That has spurred a demand for more of the products, which Dave calls “wonderful and terrifying.”

“The key is not to create profit, but to move product so more production is needed,” he says. “Selling is getting better and I’m expecting us to have the best sales year yet.”

They have also hired Amanda Flann, full-time director of sales and marketing, a godsend, Dave says, who will be able to devote her time to expanding the business.

MyFight helps sustain jobs for more than 1,000 women, and the hope is that Flann will help that number grow. But, Dave says, its focus will always remain the same.

“The thing we are all motivated by is not the jewelry, not the stores,” he says. “It’s these women — we can make a big difference in their lives, help them raise their kids, pay their rent.”

And back to that first good deed, the one that led to multiplied blessings for these women: Jen says AJ is “doing great.”

“He’s the greatest kid, ever, just so fun to be with and he’s very social,” she says. “He lights up a room just by walking into it. He’s got a million-dollar smile and is funny and witty and charming.”

He’s the first athlete in the family. Growing up, his older siblings leaned more toward acting and musical activities.

“It’s been fun to dive into the travel team world for basketball and football,” she says.

Whether a baby comes through birth or adoption, she says, “God gives you a special person to grow with and we feel very blessed to have AJ. We just feel like we won the lottery with that kid.”

TO LEARN MORE ABOUT MYFIGHT, or to shop their goods, visit myfight.org.