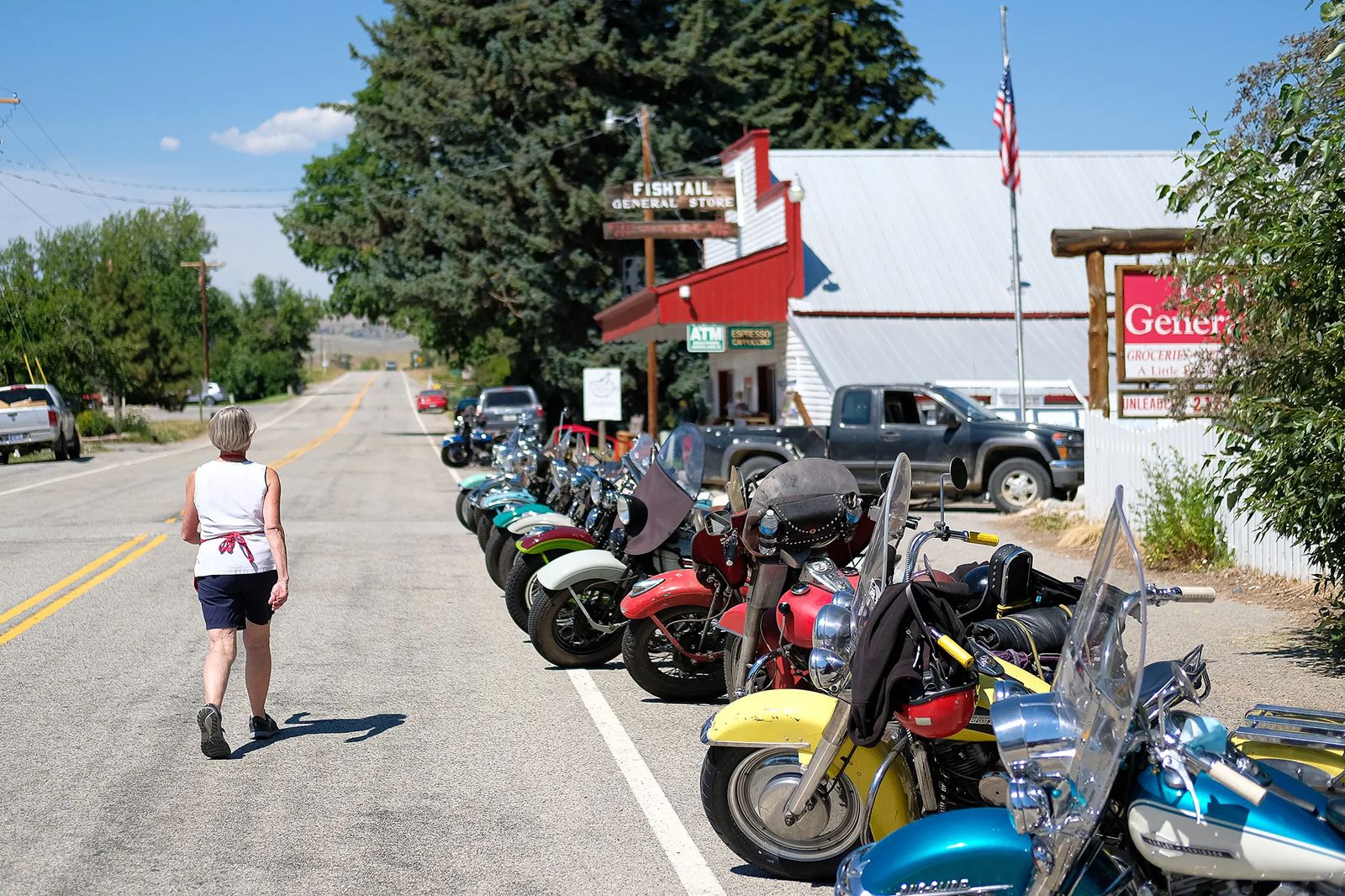 Katy Martin is a human whirlwind. The long-time Fishtail resident is a circus ringleader, community cheerleader and daring entrepreneur all rolled into one. She runs on high octane.

“Some people are blessed with looks and I’m blessed with energy,” Katy says with a grin. “I guess I’m just lucky.”

To “celebrate” her 70th year, the owner of the Fishtail General Store hasn’t just kept her doors open and her shelves stocked during these times of COVID-19. She’s expanded her “side” business, Fishtail Food Distributing, into a brand-new facility. Her distribution company supplies roughly 8,000 items a week — including the popular “Anytime Breakfast Burritos,” “The Skinny” sandwiches and sundried tomato wraps — to more than two dozen City Brew outlets from Kalispell to Cheyenne to Bismarck. 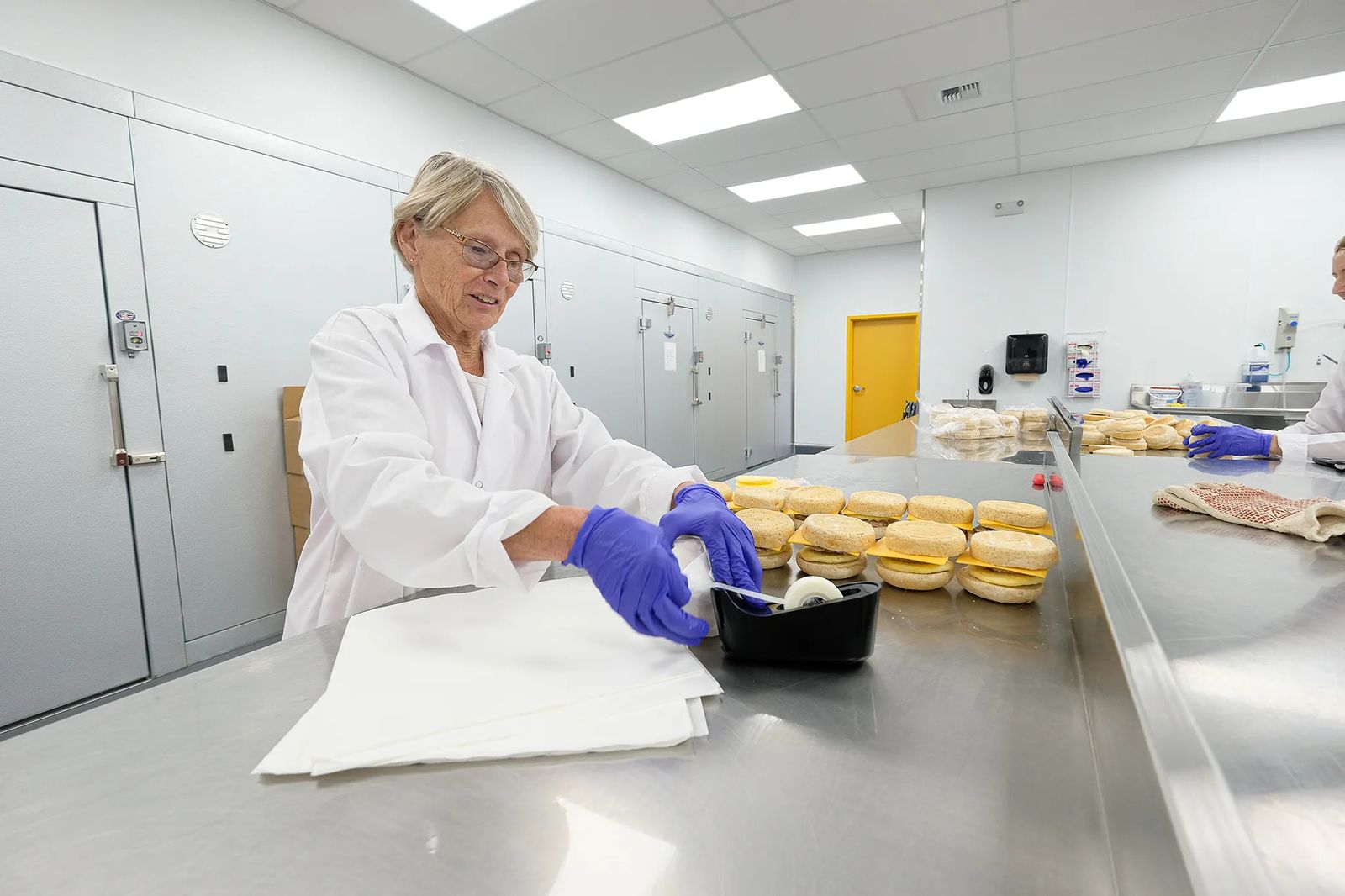 Katy’s life — aside from her weekly run into Billings for supplies — exists within the scope of a small triangle in “downtown” Fishtail, a community of 60 to 200 souls, depending on who’s counting. Her home sits three doors down from the Fishtail General Store and her new building is located just across the street and about two lots to the east. Wrapped in her bright-red apron, the diminutive figure is often glimpsed as a scarlet blur sprinting from place to place.

“I’m busier than I ever was,” she says during one of the rare moments she pauses long enough to answer questions. “You’d be surprised how much you can get done between 4 a.m. and 8 a.m.”

Katy and her late husband Bill theoretically “retired” more than 30 years ago. That’s when they left their day jobs — she taught adaptive physical education to special-needs students while he served as a policeman — and built their dream home in Tahoe, California. Within a few years, however, they tired of the ski town and began searching for a new place to sink roots. When, by chance, they took the back road into Fishtail, they were instantly smitten.

“We saw a for-sale sign on a house and Bill said, ‘Stop the car!’” she remembers. 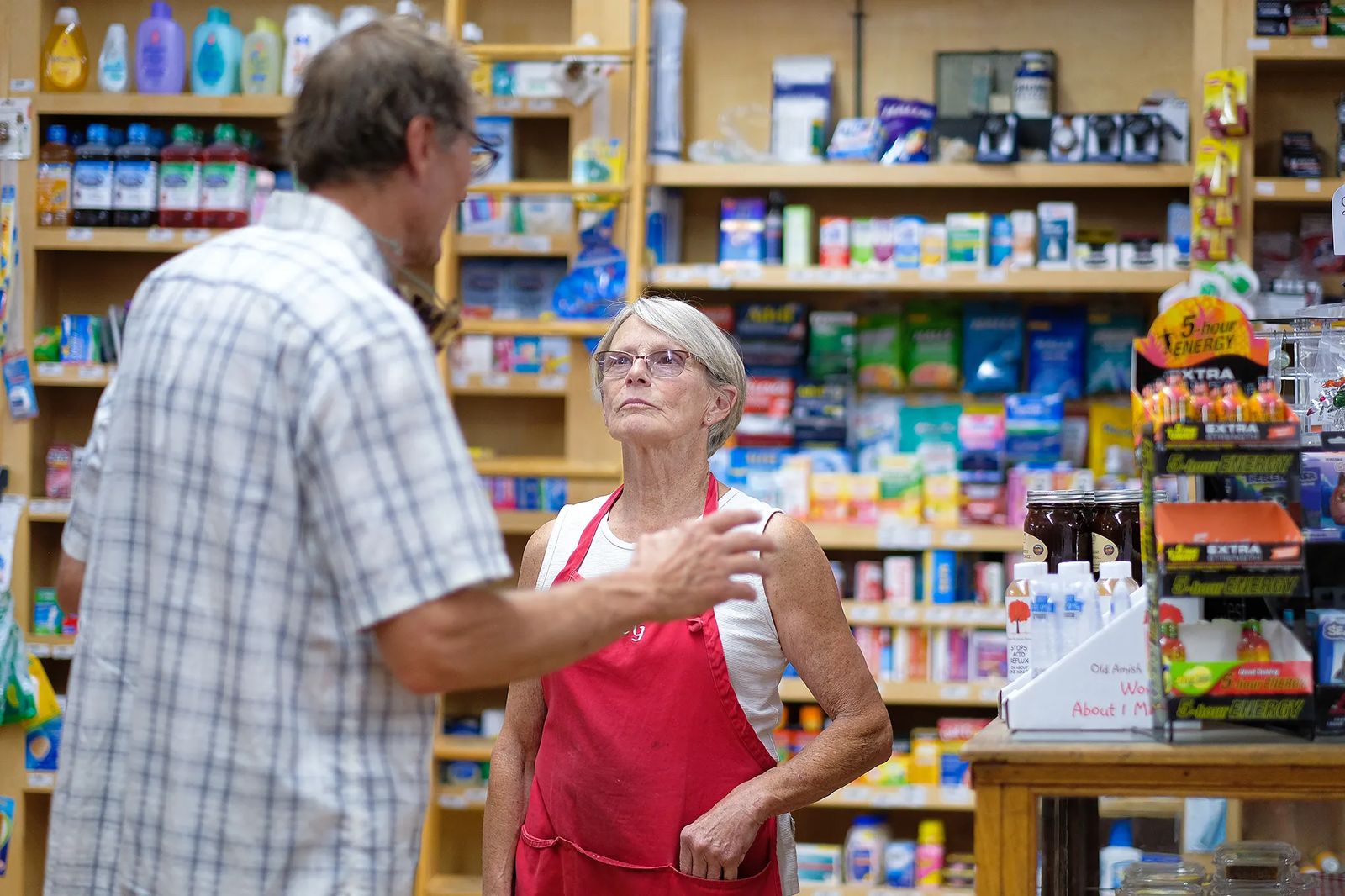 In short order, they signed papers on the house. Within their first years in Fishtail they helped build the community park and launch Fishtail Family Fun Day, the community’s annual fundraiser. Then, when the general store teetered on survival, the Martins made the leap.

“We really loved the store and we didn’t want it to go away,” Katy says. “So we bought it.”

Like Katy, the store had been and remains a mainstay of Fishtail. It’s an old-timey place with a twist of today. From locally made jams to bibs for miners to flavored kombucha, the Fishtail General Store stands true to its motto: “A little bit of everything since 1900.” Its clientele ranges from local kids licking ice cream cones on the front bench to world-renowned musicians buying snacks on their way to perform at Tippet Rise.

It was there, at the general store, that the Martins cut their teeth on the ins and outs of owning a retail business. They learned about pricing and about hiring staff.

“My philosophy is, God always brings me who I need or who needs us,” Katy says.

They also learned that their success depended on one key metric: providing what the customer wants.

In fact, it was an off-hand remark by a customer that planted the seed for what has become Fishtail Food Distribution. The deli at the general store had already garnered a strong following for its sandwiches, baked treats and Wilcoxon’s ice cream when a miner suggested that the store open earlier to sell breakfast burritos to hungry shift workers. The comment served as the spark that ignited sales of their breakfast items, which eventually grew into the stand-alone business that supplies City Brew.

So how did a small-time Fishtail enterprise connect with the Billings-based coffee business? Kim Redding, a long-time friend of Katy’s, was working for City Brew in 2011 when the owner started brainstorming new menu items. Kim, who still works for City Brew, immediately thought of Katy.

“I knew she did all these wonderful products,” Kim says, “and I knew she would be a perfect fit. I also knew that ‘no’ is not in her vocabulary.”

Kim also knew that, given an opportunity, Katy would grab it and take off. “She would do the research, reach out to the people she needed to help her and move forward,” Kim says. “And she just goes and goes.” 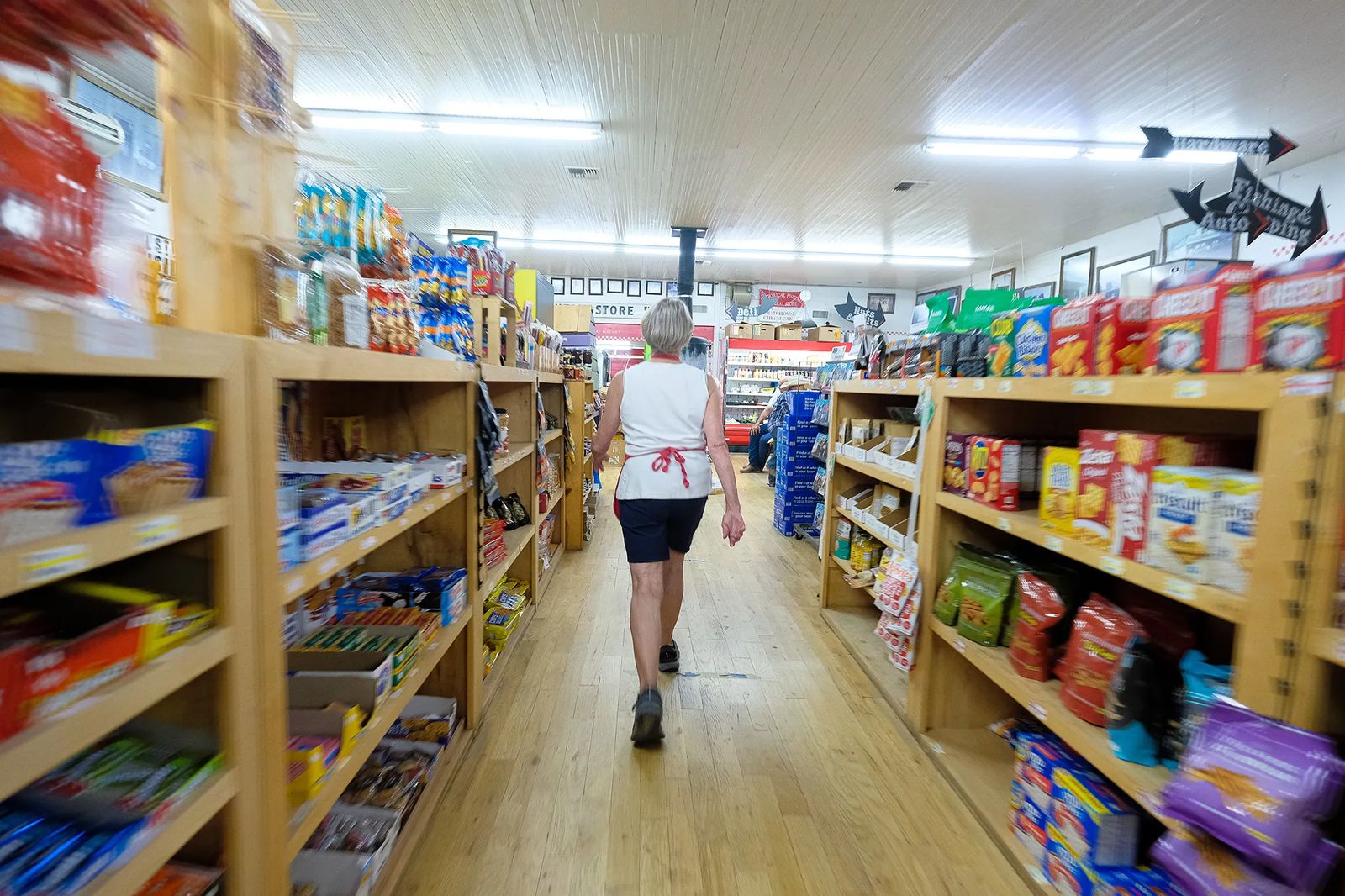 But, as the Martins’ businesses flourished, their lives took a turn. A series of strokes struck Bill, leaving him debilitated. Together, the couple rose to the challenge.

“We had many talks about what I would do,” Katy recalls. “And he’d say, ‘We’ll do what we can.’” Katy credits Bill with being the “brains of the outfit” and an inspiration for how to live each day. Katy took those lessons to heart.

“It was a joy,” she says of her role as caregiver. “It was just a gift I gave to him and he gave to me.”

Bill passed away in the summer of 2018. A year later, Katy knew it was time to move forward.

“We had this property and we needed to grow,” she says.

Relying almost exclusively on local contractors, she broke ground for the new 2,400-square-foot facility that would serve as headquarters for Fishtail Food Distribution. She chuckles when asked about the name.

“We just wanted to make it simple. I’m pretty simple. Just say what it is.”

She planned and re-planned the building, making ample room for storage, freezer space and a vast commercial kitchen. During the months that the pandemic shuttered many businesses, she and her builders made good use of the pause.

“For us, those three weeks were a godsend,” she says. “It gave us an opportunity to finish the building.” 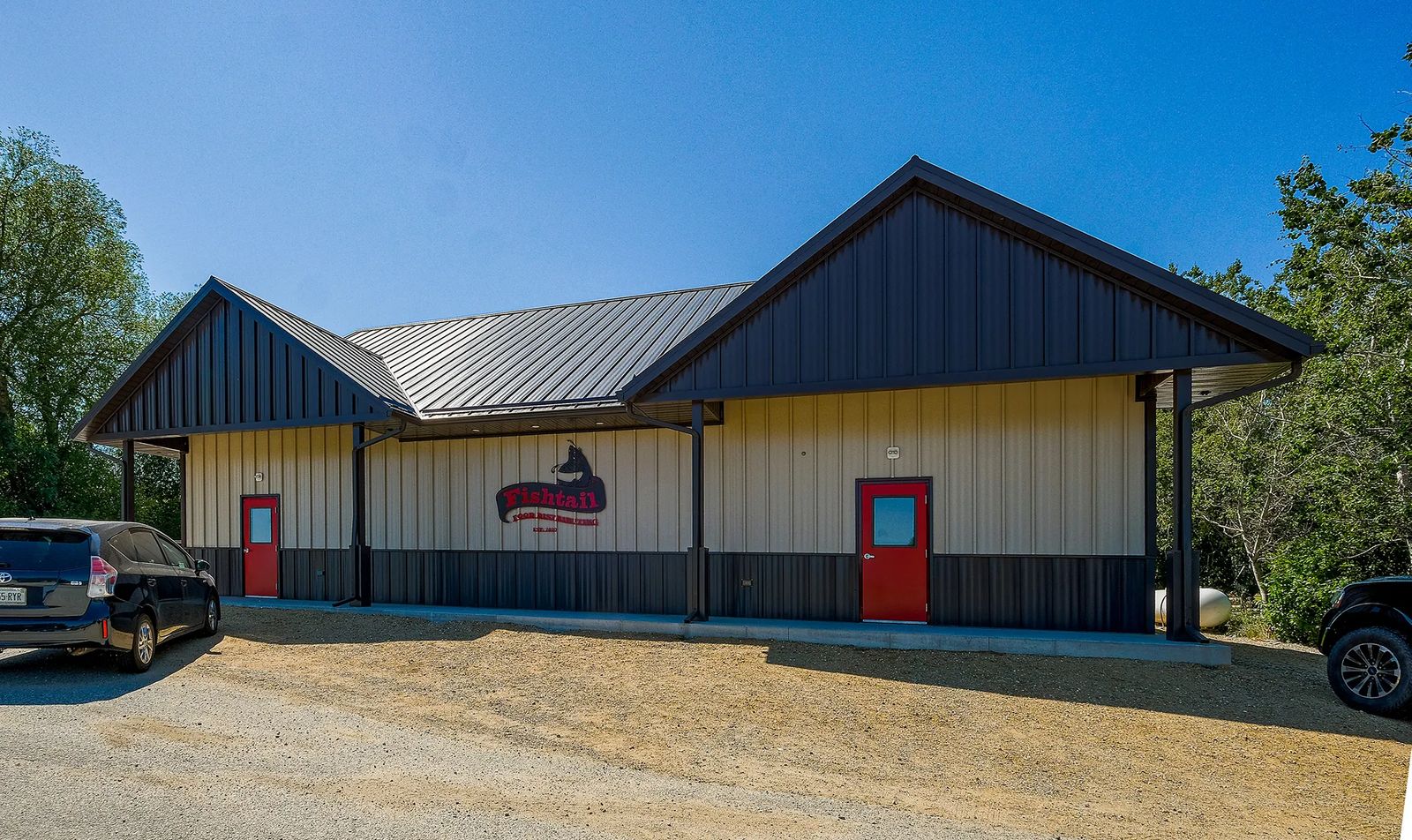 The new facility has only been operational since June, but already Katy is thinking ahead. She’s got visions of expanding her catering business, as well as finding more outlets interested in products she and her staff can prepare. At the same time, she’s eager to share her success — and her commercial kitchen — with her community.

“We’re going to do as much for everybody as we can out of this building and still be profitable,” she says. "And that’s key.”

As the red blur of Katy dashes around within her self-imposed triangle in Fishtail, her pace is not slackening. The former PE instructor still lifts weights and works out three times a week. She insists she feels like she’s about 40 years old as she brainstorms new prospects. No doubt, she’ll march into her future with the same approach she’s used in the past.

“The challenges have been easy,” she says of her businesses. “You just put your feet down and figure it out.”

·        TREAT YOUR EMPLOYEES RIGHT AND THEY’LL TREAT YOU RIGHT. 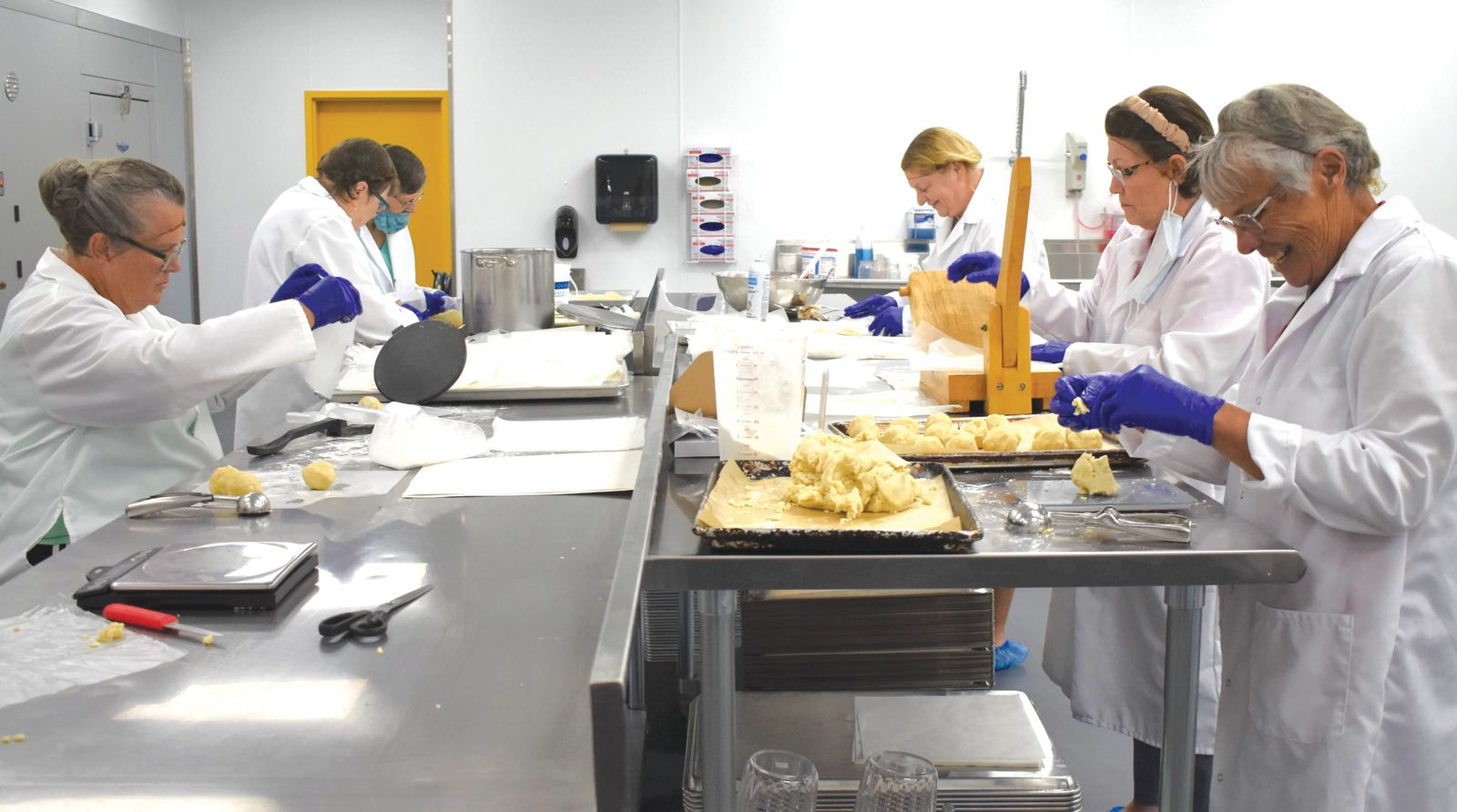 In late July, barely a few weeks after the new building had opened, Absarokee resident Lynda Heimer witnessed Katy’s devotion to her community. Lynda’s PEO group – an international philanthropic organization where women celebrate the advancement of women — would be the beneficiaries. They were baking up “hand pies” to sell at Absarokee Days. The money raised would provide educational scholarships for young women. “She’s donating time and her space,” Lynda says. “And she’s letting us have the products we need at cost. She is amazing.”