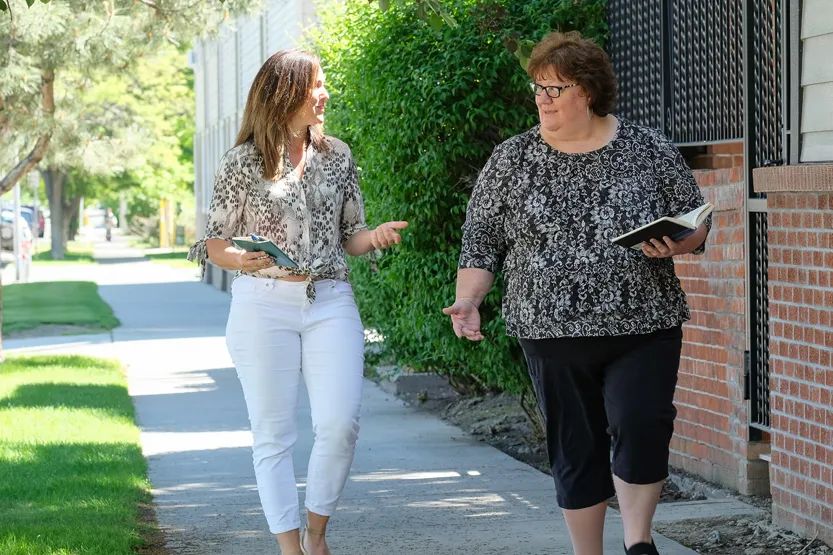 Taking it to the streets

We all know the drill. Wash your hands, stay at home, avoid public places and, if you go out, keep a distance of at least six feet and wear a mask. The advice from the Centers for Disease Control (CDC) has been all over the news and social media, along with information about the symptoms of COVID-19.

Now, imagine protecting yourself from the deadly virus without running water, soap or a sink, without a shelter to shelter in place, and no access to critical information.

This was the reality for about 400 homeless men, women and children in Billings. Many more individuals are experiencing housing instability and teeter on the verge of homelessness.

“They are humans,” says Patti Webster, the executive director of the Housing Authority of Billings. “They’re not very far away from any of us. They have names, families, histories and backgrounds not very different from yours or mine.” 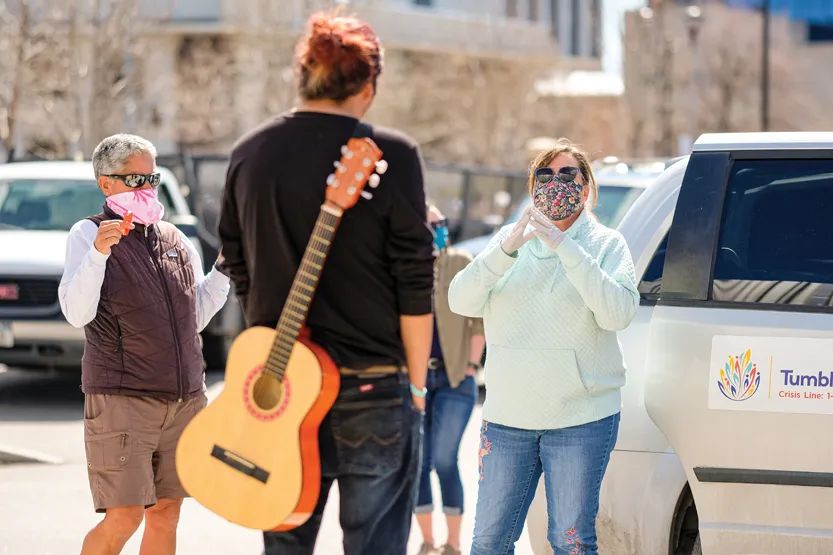 On the best of days, the homeless are an extremely vulnerable population. During the pandemic, their exposure is magnified. Across the nation, COVID-19 hit homeless populations hard with high infection and mortality rates. But not in Billings, thanks to a dedicated response from the Billings Continuum of Care (CoC), an alliance of government and nonprofit aid agencies whose mission is to make homelessness a rare, brief and one-time event.

Patti is the chair of the CoC. For the past four months, she has worked tirelessly alongside a cadre of compassionate community leaders including Erika Willis, past chair of the CoC and the executive director of Tumblweed, a nonprofit that serves homeless youth. Together, they’ve effectively stopped the worst-case scenario from happening in our community.

“I can’t tell you how proud I am to be a part of this group at this time,” Patti says. “What the CoC has done has been so successful.”

As soon as it looked like shelter in place and social distancing orders were coming, Patti called the CoC into action to assess the needs of those they served. Shelters like the Montana Rescue Mission and the Women’s and Family Shelter suddenly limited their capacity to allow for social distancing. Many agencies closed, and those that could remain open struggled to maintain a minimum of staff.

“All the services that the homeless were using on a daily basis went away overnight,” Patti says.

For the safety of clients and staff, Tumbleweed closed its drop-in center and offices. Each year, Tumbleweed serves about 1,000 youths between ages 15 and 24 and when the center closed, they had about 60 to 70 active clients.

“We are, for some of them, all they have,” Erika says. 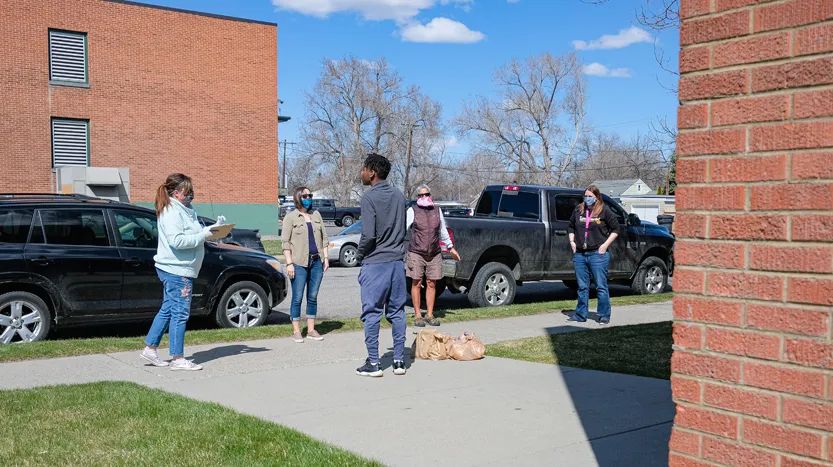 To search out the need, the Tumbleweed team amplified its street outreach efforts. They realized the homeless were among the few moving around Billings’ quiet streets. They needed food, water and reassurance. Erika and Patti’s teams delivered, handing out food boxes, water, snacks and necessities, including socks, undergarments and other clothing.

Between the two women, they knew most of those they saw by name. With those they didn’t know, they quickly developed a rapport. With each box of food, the recipients’ faces would light up with a smile and their shoulders would ease with relief. With each encounter, Patti and Erika spread reliable information about the COVID-19, including precautions people living on the streets could take. With genuine care and concern, they asked where each person was staying and what other needs they might have.

“I give huge credit to the Tumbleweed team,” Erika says. “We would huddle every day and ask, what do we need to do to meet the needs of people today?” 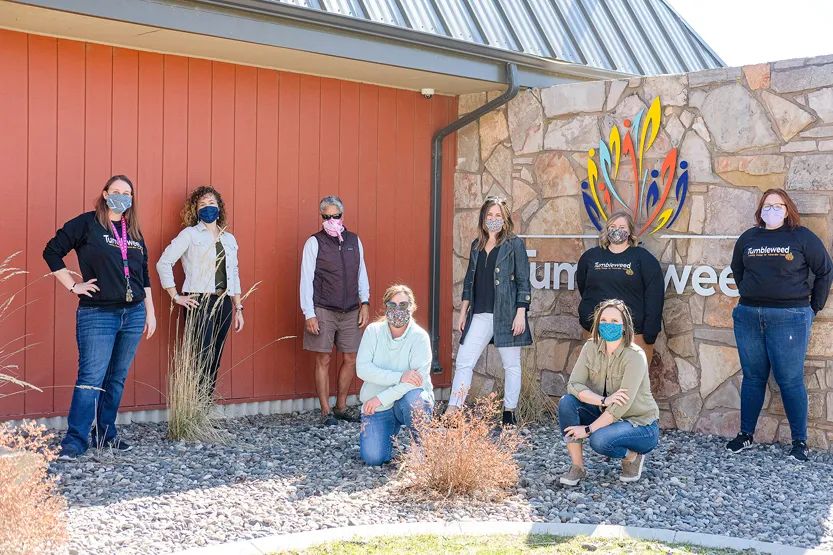 In every encounter on the streets, under bridges and in makeshift camps, their parting words were always a cheerful, “Love you!”

Almost immediately, Erika and her team recognized a need for food, and put a call out to Tumbleweed supporters for food donations. Truckloads of food were delivered, which they then boxed and distributed to anyone in need.

“It was an opportunity to connect with people and provide hope,” Erika says. “It was also a way to educate them on Covid and what they could do to stay safe.”

The food box project took off. Many of the food boxes were delivered to homeless youth and adults living on the streets. They were also delivered to more than 100 low-income elderly people. Many were health-compromised and too fearful to go to the grocery store. For some needy families, it was the first time they had accepted a food box. 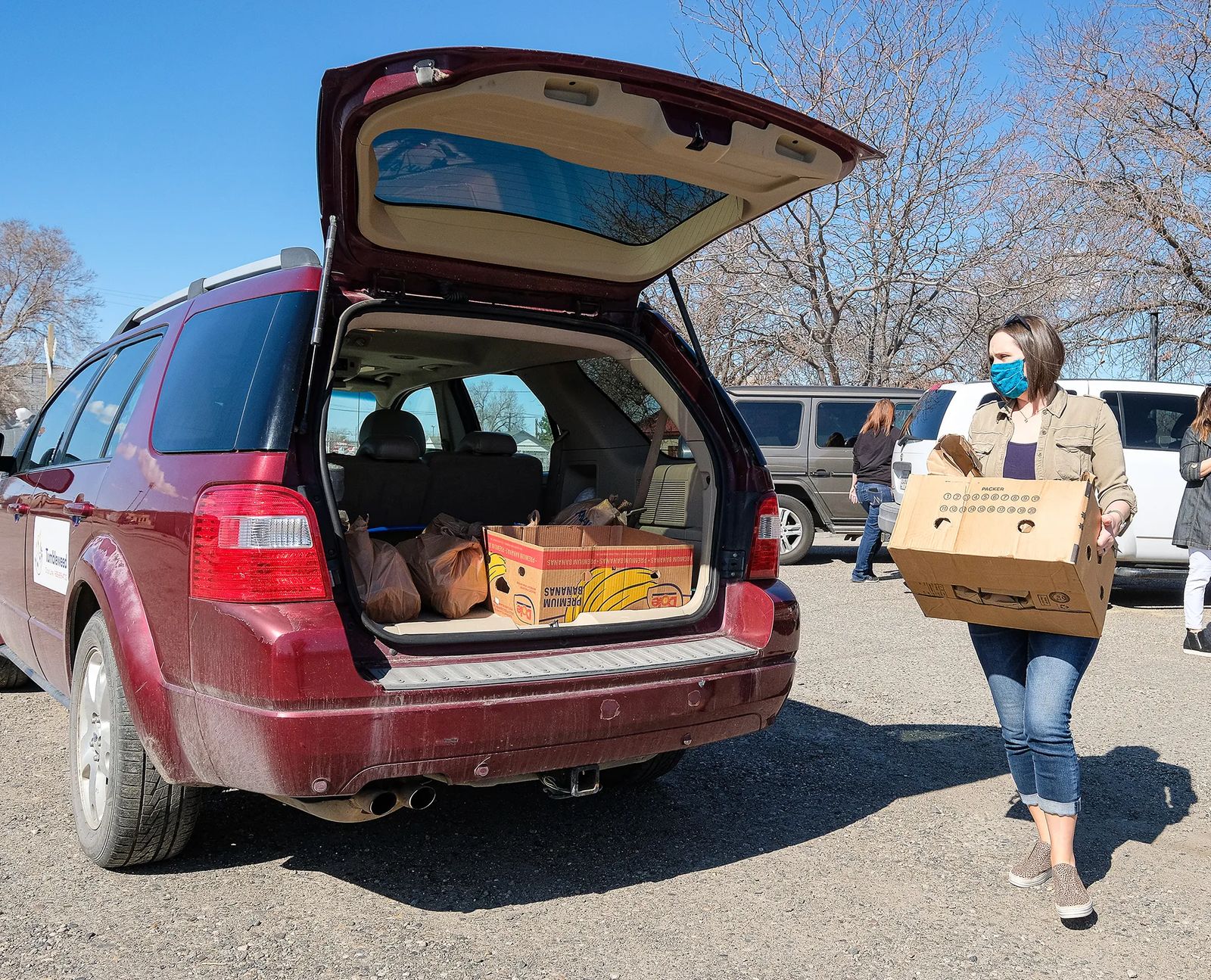 Another immediate need was a safe place for homeless people to quarantine should they develop coronavirus symptoms. With the help of public health officials, Erika and Patti set up a quarantine and isolation site in the Montana Pavilion at MetraPark. There, in draped cubicles, people could await test results and, if infected, remain isolated.

“We had no idea what we were preparing for,” Erika says. “We had to prepare for the worst-case scenario.”

Though the quarantine and isolation site had much support, staffing it was a challenge, especially early on. When they needed help changing bedding and disinfecting the stalls, Erika and Patti pulled on rubber gloves and masks and got to work. Late one night as Patti was working, she overheard a phone conversation a homeless man had with his family.

The call brought Patti to tears.

“We’re over here all trying to figure out systems and logistics and here was this man – this human side of what we were doing,” Patti says. “I realized the impact of this and the mental anguish of it all.”

The man, who was very sick, did not test positive for Covid-19 and was released from the quarantine and isolation site. He was among about a dozen homeless individuals who made use of the site – far fewer than anyone expected.

“We have not seen the outbreak that they have seen in other communities,” Patti says. “We were successful helping our homeless people shelter in place where they were and stay healthy where they were.”

Throughout the crisis, Patti and others on the team kept community and public health leaders informed with dozens of presentations and reports. Those meetings helped ensure that, through the CoC, emergency federal and state funding went to meet the most urgent needs.

The quarantine and isolation site at MetraPark has been disbanded and replaced by a mobile unit, managed by RiverStone Health. While restrictions have lifted across the state, the homeless in Billings are still highly vulnerable, and they still need support.

“We offer unconditional positive regard and a high degree of respect for all people,” Erika says. “Our primary goal is to preserve their dignity in this challenging time.”

Even in the midst of one of the worst public health crises in history, work continued to find housing for those in need. The Housing Authority of Billings successfully housed 33 homeless people in the past four months and prepared assessments for 90 others to get into housing.

“Every single one of us was serving the most vulnerable populations and the hardest hit by COVID,” Patti says. “We were just filling the gaps, and making what needed to happen, happen.”

TO LEARN MORE ABOUT THE BILLING HOUSING AUTHORITY, visit billingsha.org