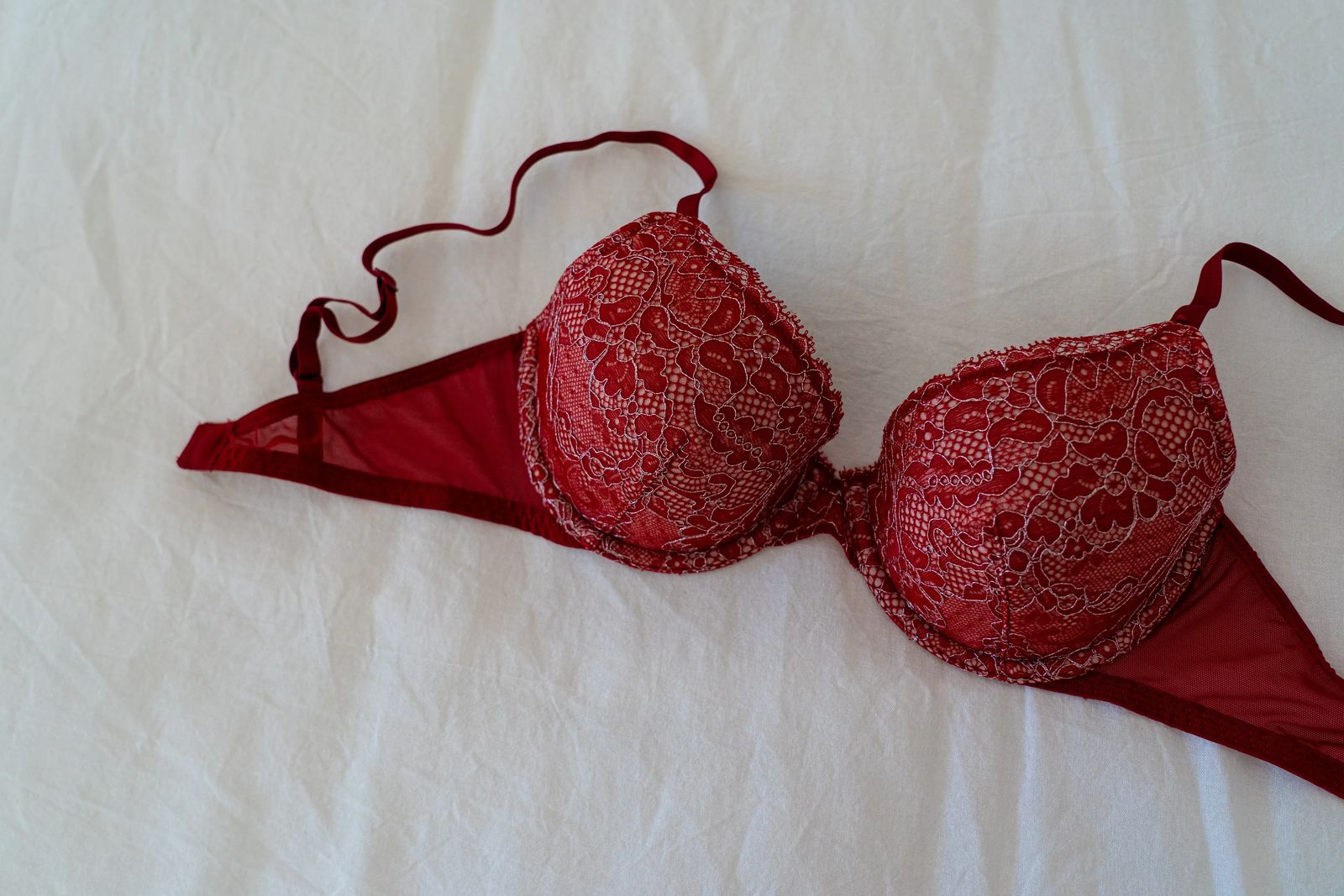 What I learned from my bra

If there is anything that epitomizes, encapsulates, or even begins to explain the act of aging for women, it is bra shopping. Think about it. That first bra was a rite of passage, a bit scary, a bit exhilarating, and if yours was like the three-pack of training bras I received, had jokes written on them.

Yes, jokes. I tell myself now that we were just entering the heyday of custom printing. T-shirts with logos and funny sayings were just becoming a thing, so it was inevitable that training bras carry out the fervor for embellishment. My underwear, at that very special time, were labeled for the day of the week and had a little joke that went along with that tribute. So clever. So problematic on sleepovers, especially, if like me, packing the undies for the right day was a skill that escaped me.

Yes, I was, ahem, the butt of many jokes in my stylish, yet misdated, under garb.

Moving from that was real bras with front closures, complicated back hooks, twisting to adjust them, and the pain of boys who loved to snap straps. Were you like me, both shocked and flattered the first time that happened? I mean, that snap meant I had actually been noticed by … wait for it … a boy. Wowzah. It also meant I had to decide, with a moment’s notice and a flash of pain, if I was going to let it happen again.

It did not, because I slugged him. (I am old; that was how we dealt with ruffians in the seventh grade, way back then.)

As I aged, bras became utilitarian; nursing, running, wider straps, fewer bows and frills. It was, after all, just a bra, and I am nothing but practical about these things. As a point of clarity, bras may be the only thing I am practical about, as I do love to be the Goddess of Excess and overdoing things, just not bras. They have a job to do, and there is no point fussing around about it.

At least that’s what I thought until I met my wonderful friend Laura, a Southern belle who once described us as diametrically opposed. I am big, she is small. I will pee behind a tree, she would never. I am very Northern, she is very Southern, to the point of “taking to her bed” when the occasion arises. I tried that. Once. There was nothing ladylike about it, probably because the toast crumbs in my bra irritated me to no end.

Laura and I had the privilege of working on the same team, traveling the country training business leaders, talking about life and our hopes for those we served. One day, while watching a stream of women walk by us at a conference, Laura said, “At least 70 percent of women wear the wrong size bra.”

I, to be honest, had never given this a thought, and again, to be totally frank, was generally confused by the whole size thing. A, B, DDD, 32, 46 — it was a bit like algebra, and I don’t like algebra. She then went on to tell me what a difference it would make for women’s looks and confidence if this weren’t a fact, and if, like her, they felt particularly pulled together when their bra and panties actually matched.

Now come on. Who has time to worry about that stuff? Apparently confident women.

So, I had a real fitting. As a result, I bought more bras than I ever had at one time, and my life changed for the better. My skin cleared up, I got the promotion, and won the lottery. OK, that’s not really true, but I did get dressed each day with a bit more enthusiasm, and for those of you that know me on social media, enthusiasm is part of my schtick, and that was enhanced by my new coordinated undies confidence.

A good bra does things for you that even chocolate can’t.

I am telling you all of this because I went bra shopping yesterday, at TLC Lingerie. There is something about having someone bring me just the right bra, in just the right color, along with a couple that are not at all right, that just feels decadent. It makes me think that everything is going to be OK, even as we communicated through our masks, and that, for a few days anyway, I will have the thrill of wearing something new and wonderful.

While I stood there though, I had to face facts. My bras are required to do different things now that my breasts are often closer to my arm pits when I wake up, than I imagined possible back when my bras displayed childhood jokes.

I am also telling you this because aging, and the changing of our bra requirements, is one of the most amazing gifts. As we age, and change, we grow into ourselves, into our choices. We decide what we will eat, where we will go, whom we will gift our time to, how we will present ourselves to the world, and what we will keep to ourselves.

Being a woman is ever changing, and, for those of you younger than me, I want you to know the best is truly yet to come, everything is sweeter in your 50s, and I look towards my 60s with total awe. Who we get to be, what we get to do, is a series of practical choices mixed with some of life’s unexpected disasters. But it is OUR life, and it is our greatest privilege to embrace aging.

Here are three things I have done to become me, an aging woman I love on the best days, and tolerate on the others. They are little pieces of advice I wish someone would have given me.

1.    Sit quietly with yourself for as long as you possibly can. I don’t mean for two minutes, or during a pedicure. Escape to silence and listen to you. Stay there for a day, a week, or, as I was privileged to do, several months. Just listen to you and honor what you hear. The woman you want to be is seldom heard over the cacophony of life, and she deserves her say.

2.    Say yes whenever you can, and no when you should. The more you say yes, the bigger and more wonderous your life is going to be. Even when life is full of trials and strife, the yeses will buoy you. Conversely, the more you say no, the more often you can say yes. If it does not fill you, feed you, drive you towards your best, say no. No is the greatest gift you can give yourself.

3.    No matter how old you are, or the condition of your girls, buy the prettiest, most expensive bra you can find. It might not change your life, but it sure will be fun to wear.

I have never written about anything like bras before, and it scares me just a little to put these words out into the world. I was raised to keep the straps under my shirt, to never kiss and tell, to be modest and humble when winning the battle. But, as I tell the people I am coaching to get their Nexts, there is no growth in doing the same thing over and over, and there is more fun in change than boredom, so here you are, an article on bras. I hope it did for you what it did for me, made me think about how fun it is to be a woman.

Go on, have fun, you deserve it. So do your girls.