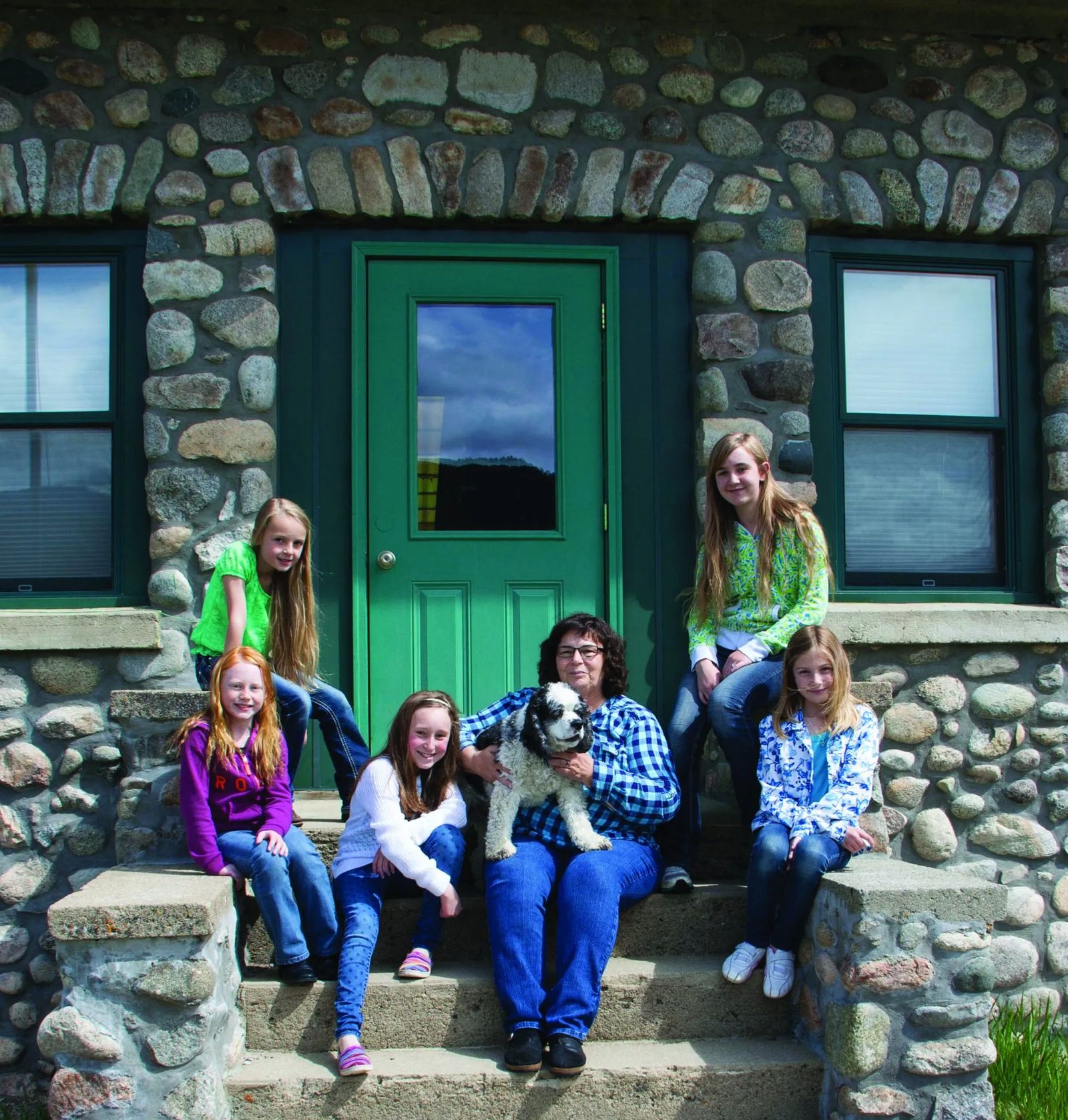 A Legacy of Learning

Visitors to Nye Elementary School, located at the base of the Beartooth Mountains, are greeted by a few barks from Patrolman Pete, Head of School Security. Despite the gruff bark, the black and white cocker spaniel is more of a greeter, and warms up quickly after teacher Kathy Currie says hello.

Not many schools have a dog in the classroom, but then again, not many schools are as small as Nye School. There are only five students in the one-room schoolhouse, all of them girls, split between third and fifth grade. Mrs. Currie likes to joke that the school is “Mrs. Currie’s Academy for Girls.”

The idyllic, stark-white, stone school was built in 1931, and it stands alongside the ancient cottonwoods and thick willows that line the Stillwater River. From every window in the classroom, the view is breathtaking.

Mrs. Currie has been the teacher at Nye School for the past 13 years, and it’s been a small school – make that a tiny school – for her entire tenure. The largest class she’s seen was nine students, but she’s also taught as few as two students.

“The school manages to hang on with enrollment somehow,” Mrs. Currie says. “You just don’t ever know who will come from year to year.”

Almost every day, Mrs. Currie’s class takes a few minutes to do some banking. The students earn “money” for good behavior and doing “jobs” around the school, including a rotating duty taking care of Petey. The money is kept in a bank, a little locked cashier’s box, and students take turns being the banker. All of the students are required to keep a ledger and track their transactions. 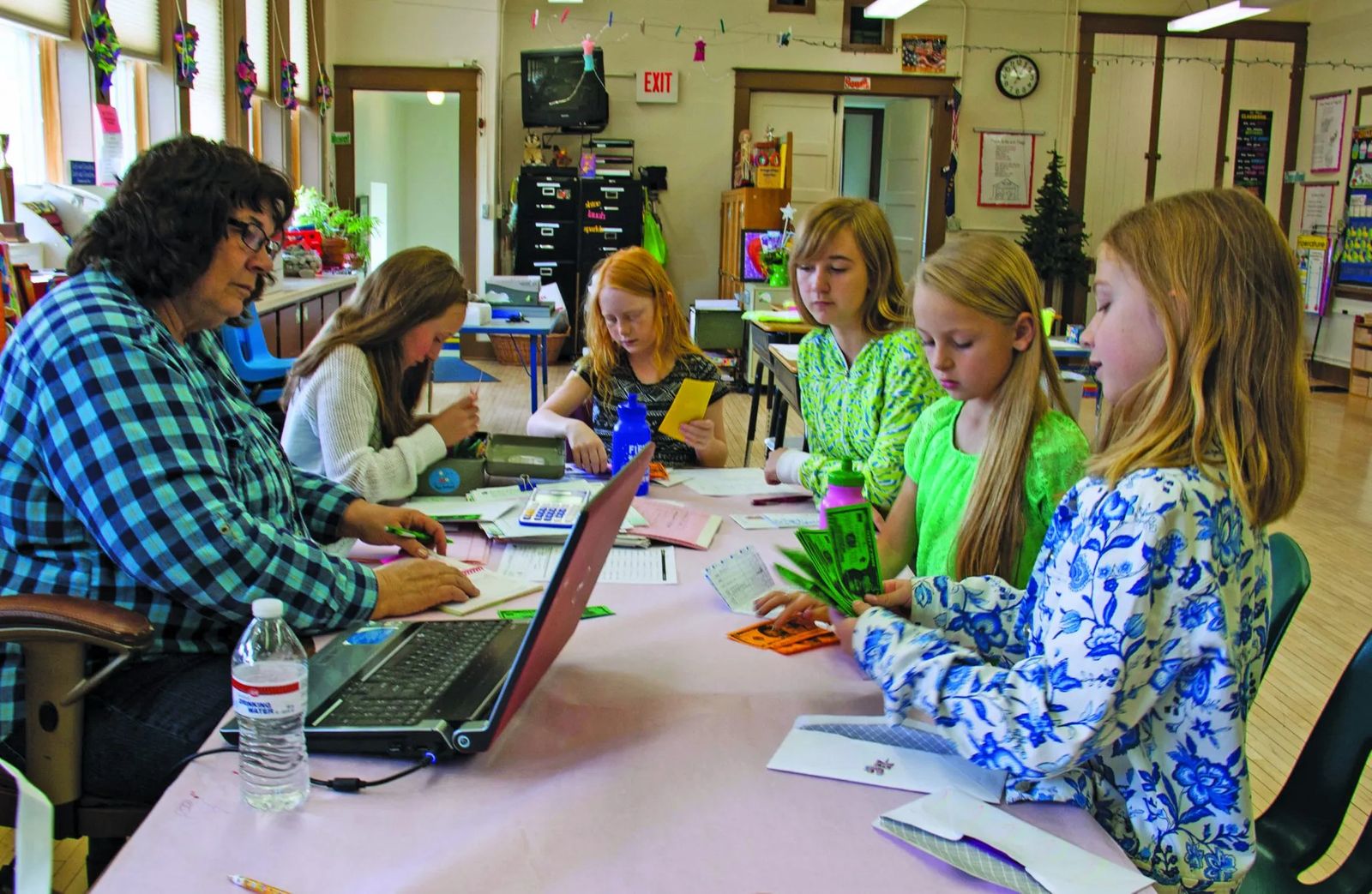 They are required to pay desk rent, and, with Mrs. Currie’s approval, can occasionally buy out of a homework assignment with their colorful cash. Once a week, the students take turn bringing something from home to auction off. The bidding can get crazy, with some of the more quirky items – including a giant paper clip – going for more than $100.

The banking idea is part economics lesson and part life skills, and it was suggested by Claire Hatch, 11, who attended McKinley Elementary in Billings before transferring to Nye last year. The program was part of the curriculum there in her fourth grade class. For the most part, she’s enjoyed the move to Nye School, especially Mrs. Currie’s individualized instruction.

“I’ve gotten a lot better at math, especially division,” Claire says. “The biggest difference now is that I like it.”

Mrs. Currie has a way of building her students’ confidence, with high standards, patience, and plenty of praise for a job well done.

“Her favorite sentence is, ‘I don’t know, you tell me,’” says Keagan Sandlin, 9.

“They’re all good students,” Mrs. Currie adds, “But sometimes you have to convince them.”

Despite the obvious social drawbacks of a small school, the girls are thriving.

“We don’t always agree, but we can still get along,” Claire says.

“And you don’t have to worry about bullying because there are only five of us,” adds Brynne Eixenberger, 9. 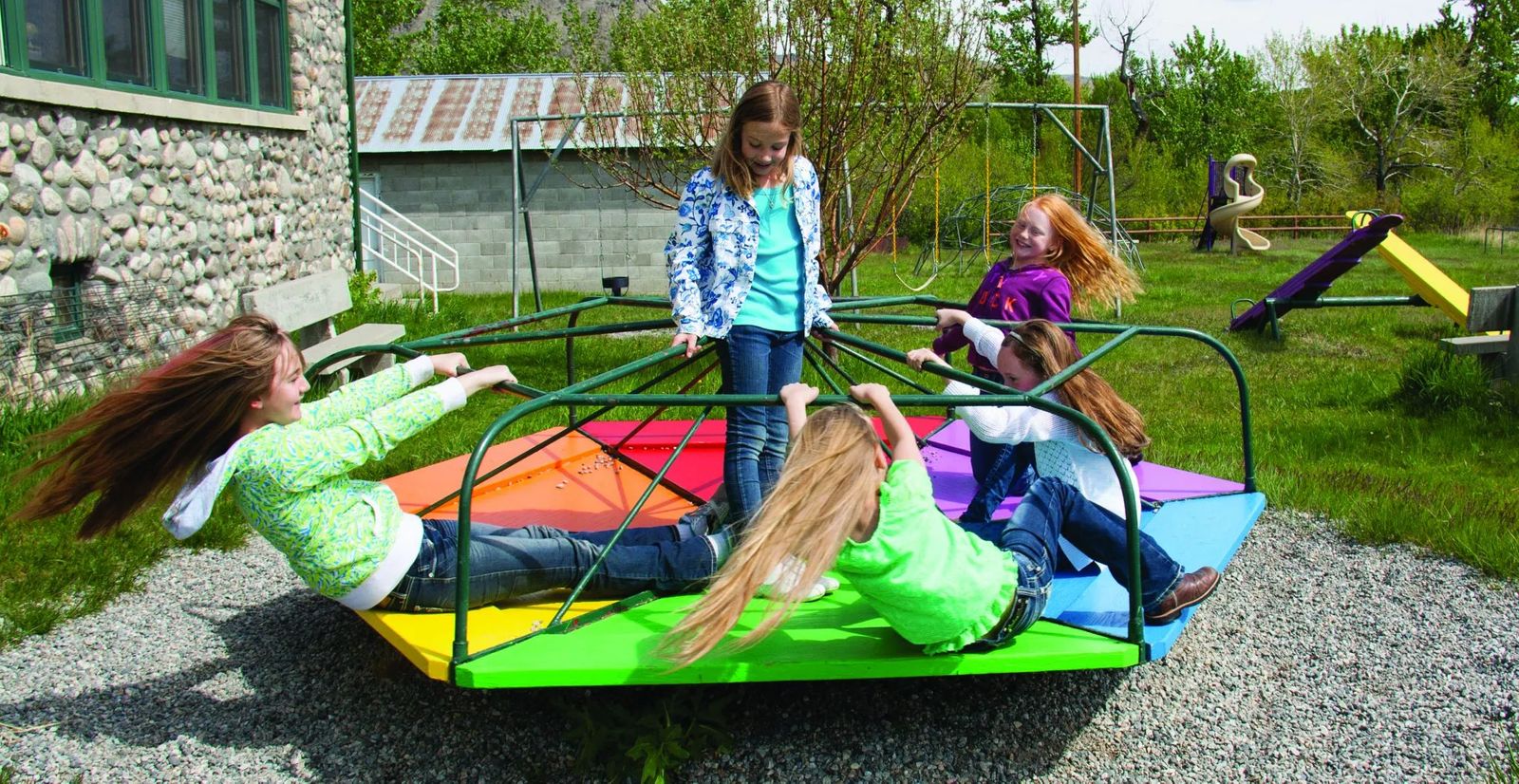 The nostalgia of the one-room schoolhouse belies the advanced technology that is available to Nye students. They’ve got high-speed internet, a computer-controlled, interactive white board, and a bank of computers with up-to-date software. Through a grant, the school recently received three iPads and an updated wireless printer. It could easily be argued that they have more technology per-student than most schools in Montana.

“When people come to the school and see all the resources and the building and our technology they’re always surprised because they don’t know how up to date we are,” Mrs. Currie says.

Once a week, locals gather at Nye School for Family Game Night, and since trick-or-treating at far-flung ranches isn’t an option, a big Halloween celebration is also held at the school. A walking path is being constructed around the school grounds to provide a safe place for locals to get in some exercise.

“It’s always been a priority of mine to keep the community involved,” Mrs. Currie shares. “We don’t have a lot of kids up here and when people come to these programs they love the interaction with the kids.”

By far, the most popular event at the school is the annual Pie Auction. Locals bring pies and other baked goods to the school for auction, and many of the pies fetch $100-$200, depending on the reputation of the baker.

“You have to see it to believe it,” Mrs. Currie says.

Last year they raised more than $4,000, which was used for enrichment activities, including field trips, ski days, and an end-of-the-year trip to the Black Hills in South Dakota. Because of the fundraising, each student could bring one or both of their parents. This year there were eight adult chaperones for the five students. 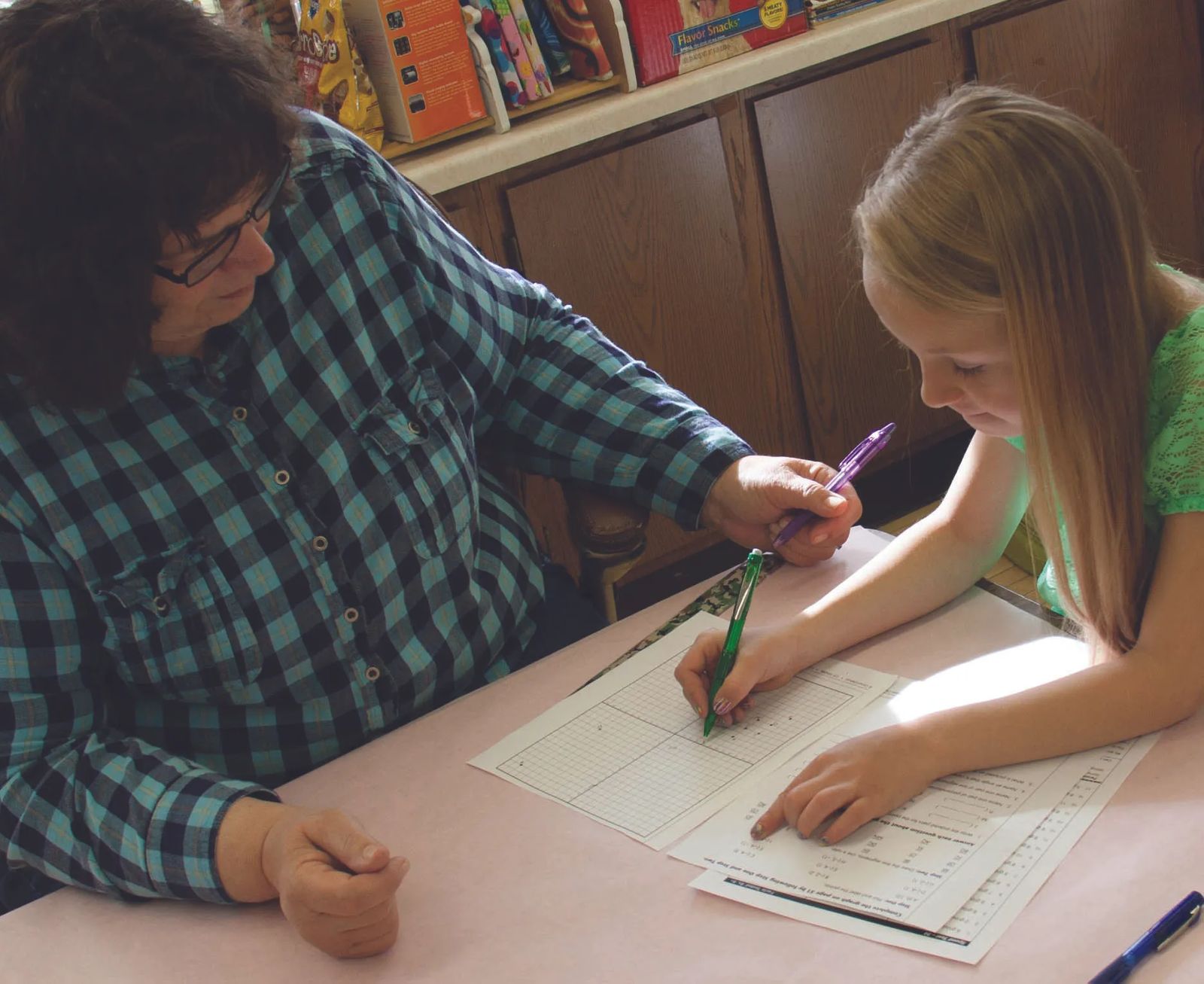 Like every school in Montana, Nye School is required to meet the state’s curriculum standards, including mandatory testing, which the girls do on computers. Last year, it was a bit of a struggle to get through all the testing in the time allowed, but Mrs. Currie says they managed.

Nye School is accredited as a K-8 school, and Mrs. Currie is certified to teach kindergarten through the eighth grade. However, parents are encouraged to send their students to Absarokee Middle School for seventh and eighth grade. By that age, they’re usually ready for a change Mrs. Currie says. “When they leave our school they’re ready to take on anything.”

Kathleen Howes’ two daughters, Maggie, 13, and Ally, 9, have attended Nye School since they were in preschool. Maggie has moved on to middle school, while Ally is still in Mrs. Currie’s class.

Now that she’s in middle school, Maggie has to catch the bus at 7 a.m. and isn’t home until 4:15 p.m. Ally could also ride the bus to Absarokee, but the Howes prefer the proximity of the school. They’re also sold on Mrs. Currie’s instruction.

“Mrs. Currie is such a wonderful person, such a nurturing person,” Kathleen says. “Maggy didn’t have any problems transitioning to a larger school and she was probably more academically prepared than the other kids in her grade.”

When Mrs. Currie took the job at Nye, the mixed classroom posed some challenges for lesson planning, but the one-on-one attention she was able to give students was refreshing. In Michigan, where Mrs. Currie taught for 28 years before coming to Nye, she taught kindergarten at an elementary school with 1,500 students.

She learned of the opportunity at Nye through her sister, who lives in Laurel. Mrs. Currie was intrigued by the idea of a one-room schoolhouse, and was accustomed to rural living in Michigan, so she applied.

“The board warned me when I started that the local ranchers would come calling,” she says.

Sure enough, they did, and after 11 years living in the teacherage next door to the school, Mrs. Currie married a local rancher. It’s her first marriage.

She has informed the school board that she plans on staying another three years, until her third graders go on to middle school. Board members should have a chance to find her replacement, but that’s not an easy task. Young teachers are attracted to the romance of a one-room schoolhouse, but usually only stay a couple years. The district can’t compete with the pay offered at larger districts, Mrs. Currie says, and the remoteness can get lonely for a young person. Billings, the nearest social hub, is about 70 miles away.

By the time she retires, Mrs. Currie will have been teaching 44 years. With her enthusiasm for her profession, it’s impossible to guess her age.

“I think the kids keep me young,” Mrs. Currie says. “I have all the patience in the world for kids, so teaching has been a good fit for me. I think that if I had to work in the adult world I wouldn’t be nearly as happy.”

Mrs. Currie may be leaving the profession, but she’s committed to the community. Like so many other Nye residents, she realizes the school is at the heart of the community.

“No matter what happens,” she says, “it will always belong to the community.”