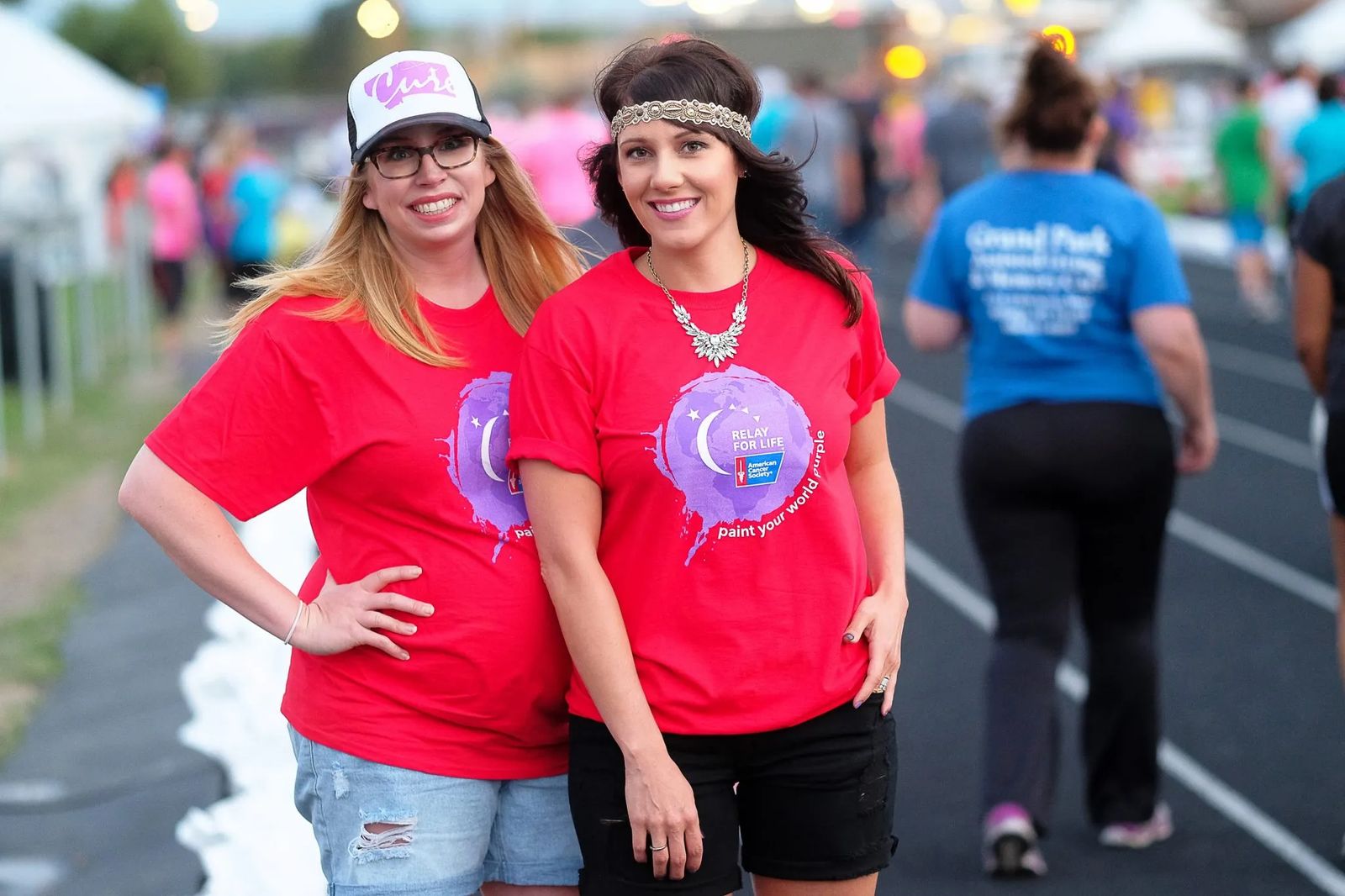 A Passion for the Fight Against Cancer

“Cancer is just like this relentless, tireless bully that targets no one in particular and no one is immune to the effects. It just doesn’t discriminate. It is this universal bully that wreaks havoc on the world. The tenacity of the collective human power, however, is far stronger than anything that cancer can do to us.” ~Megan Kongaika

There’s a time in the wee hours of the morning on a weekend in the middle of July, when, despite crowds of people camping out on the West High track to show support in the fight against cancer, a stillness falls. It’s peaceful and electric at the same time. Some years, you can see the stars larger than life overhead in the big Montana sky. As two friends put their feet up for a brief moment to rest, Megan Kongaika, whose feet surely feel her seven months of pregnancy, and Vicki-Lynn Terpstra sit back in awe and wonder at the generosity of the community in which they live.

“It really continues to be a healing experience for me,” says Megan about the Yellowstone County Relay for Life. “For that one night, you are just surrounded by people who can just look at you and say, been there, been through that and got to the other side.” 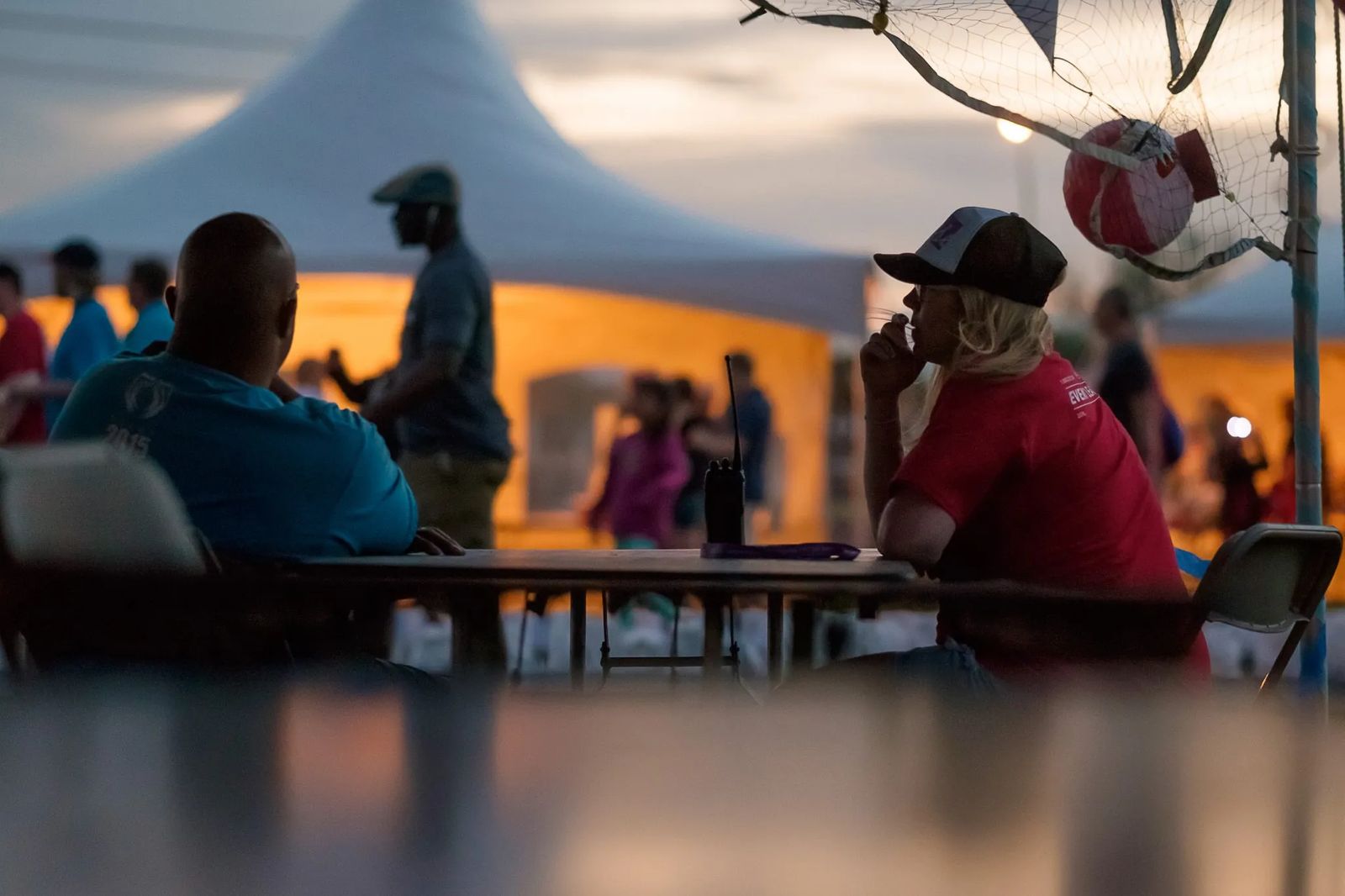 Next year, this duo that’s worked side by side on public relations and marketing for Relay for eight years together will move into the top leadership post, chairing this fundraiser and hopefully leading the community into unchartered territory with new ways to celebrate and bigger ways to raise needed funds for cancer research. In their mid-thirties, they are the two youngest chairs to serve. They are also the first female duo.

It’s a job both agree will be done better because they have each other.

“Megan and I balance each other. She is calm, cool and steady going. My soul just becomes competitive in everything that I do,” Vicki-Lynn says breaking the more serious tone. “I mean, I am the weirdo that races strangers up the stairs in the airport and they don’t even know it. It’s an issue I have!” As she thinks about the monumental task ahead, she says, “I can’t wait to work out those goals with her over the coming months because she shouldn’t leave me to my own devices.” 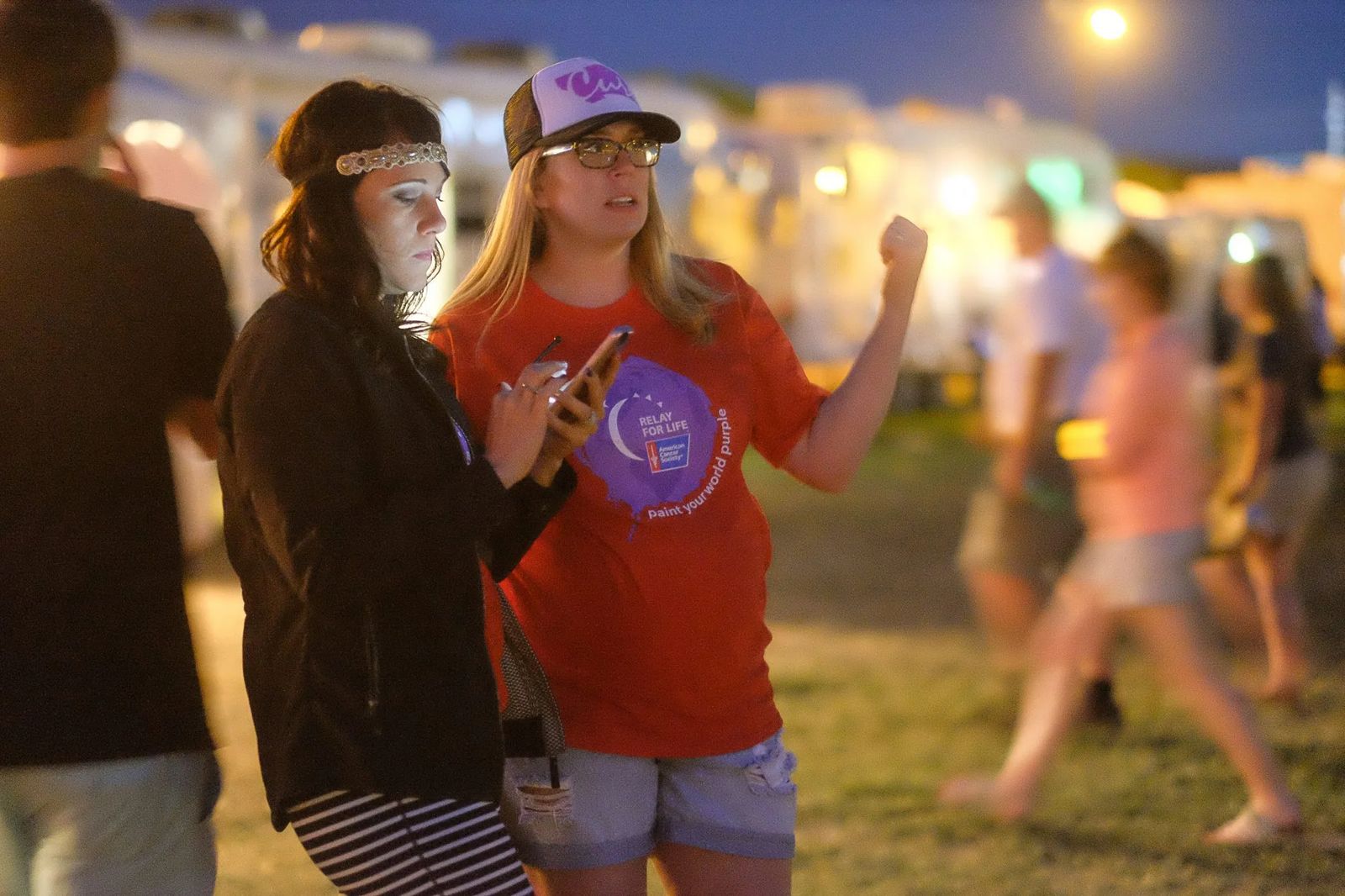 Just like every leader who’s held this post in the past, both women are passionate about the cause. Both have their own unique cancer story which drives them.

“In 2007, I was moving back to Montana from Alaska and my dad offered to fly up and drive the Alcan Highway back to Montana with me,” Megan begins. It was a five-day, father-daughter trip with nothing but the open road between them. “The whole time, he was suffering from really bad heartburn, just kind of extraordinary, intense burning acid reflux.” Once back in Montana, doctors uncovered the insidious culprit. “We found out that he had esophageal cancer.” As she shares the hard story about his diagnosis, she says, “He was doing everything right. He had quit smoking 30-plus years prior. He had taken really good care of himself, so it really felt like a total injustice.”

The first few weeks of treatment brought Megan’s first brush with seeing what the American Cancer Society (ACS) truly does for people. Since Megan was still looking for a place of her own, ACS set her dad, Jim Schultz, up with housing, no questions asked. As Jim made his way through a very difficult treatment, Megan soon realized this wasn’t a disease that would touch her dad and run. At 64 years old, it would consume him.

“I remember this one particular point in my dad’s journey where it was really clear, he was going to die,” Megan says reflectively. As her dad lay in bed floating in and out of consciousness, “I was just really having a hard time at his bedside. I had my head down in my hands and he just reached over and started patting my back. He could sense, even in his delirium that I was struggling.” She says, “That cancer took him in less than a year. It was a very fast, very aggressive, very complicated cancer.”

Witnessing her dad’s struggle firsthand, Megan decided that sitting back and watching cancer take its toll wasn’t going to do anything for other families who would walk down the same road. At the time, she was working at EBMS and the company was in search of a new Relay for Life Team Captain. She signed up to lead. “Empathy is not one of my highest strengths, but activism and achievement is. That’s kind of where I operate.” She says it gave her a mission. “It is just a constant reminder that we still have an incredible amount of work to do and that keeps me going.”

While Vicki-Lynn can’t fathom the depths of grief Megan has had to endure watching a parent succumb to cancer, her grandfather lost the fight when she was young and she’s seen what cancer did to her husband who lost his dad in his twenties to the disease. 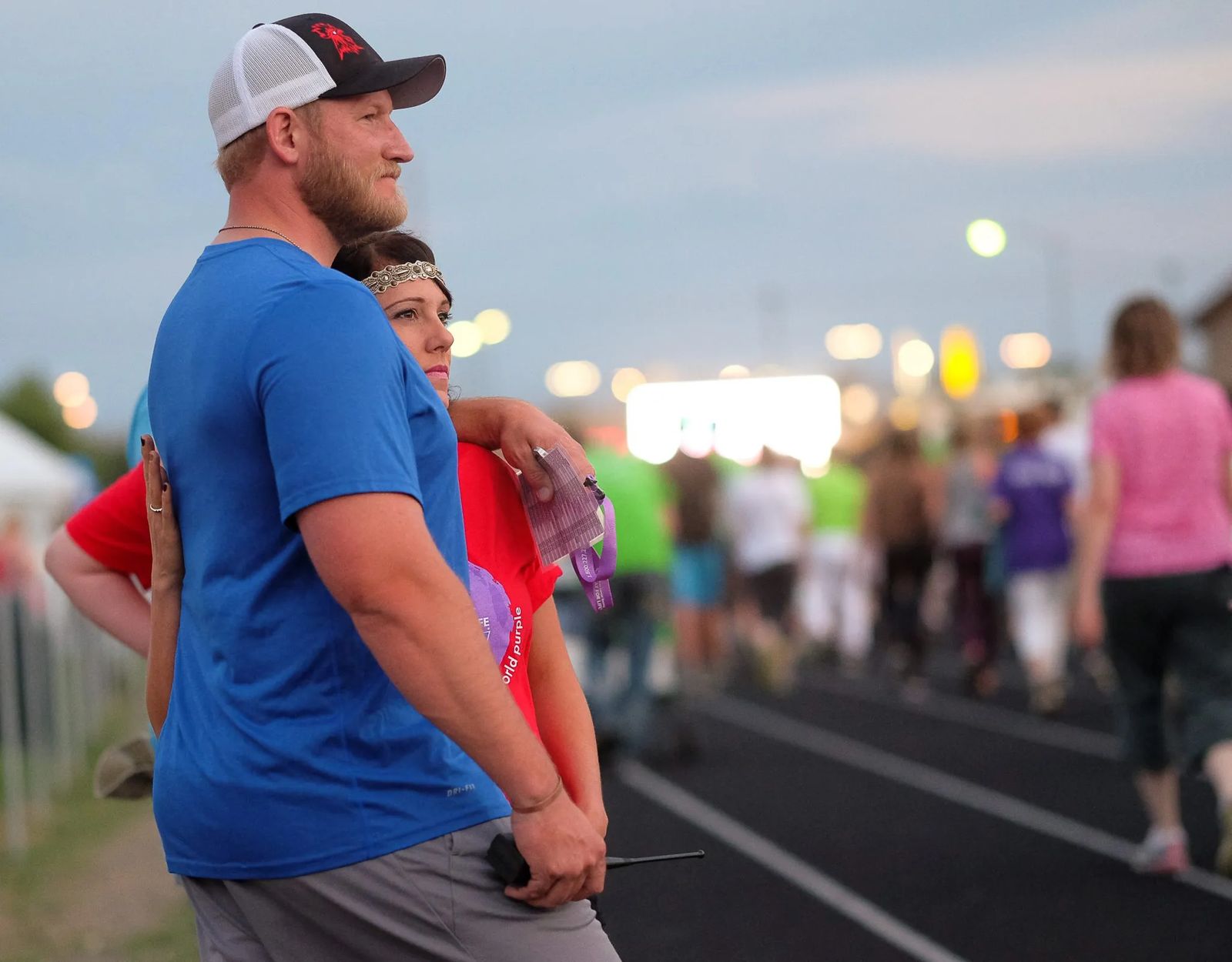 “My husband was away at college at the Air Force Academy when he lost his dad,” Vicki-Lynn shares. “He talks to me about the night that he knew, in the middle of the night, that he lost his dad before he even got the call. It just hits so home for me. It just breaks my heart.”

When Relay weekend comes, Vicki-Lynn and her husband Bryce have a tradition, one that never seems to fade in emotion. “I love walking the luminaria ceremony lap with my husband and finding my grandpa and his dad’s luminaria. I hold his hand and cry through that moment. Though I always think it’s going to get easier, it is still the same powerful moment.”

It’s a moment that’s powerful for the 7,000 people who graced the track during the 2016 Relay. With each little white bag honoring someone who faced that same fight, for every team fundraiser and every single individual donation big and small, Yellowstone County earned the title of 8th largest Relay in the world out of 5,000 events in 20 countries. Megan smiles and says, “We beat out the New York Cities of the world.” This year Yellowstone County’s Relay raised $537,000 and counting, which Megan says is enough to fund two major cancer research studies. “Our footprint on cancer research right here in Billings, Montana has just been vast and expansive and really, really incredible. We all benefit from that,” she adds. 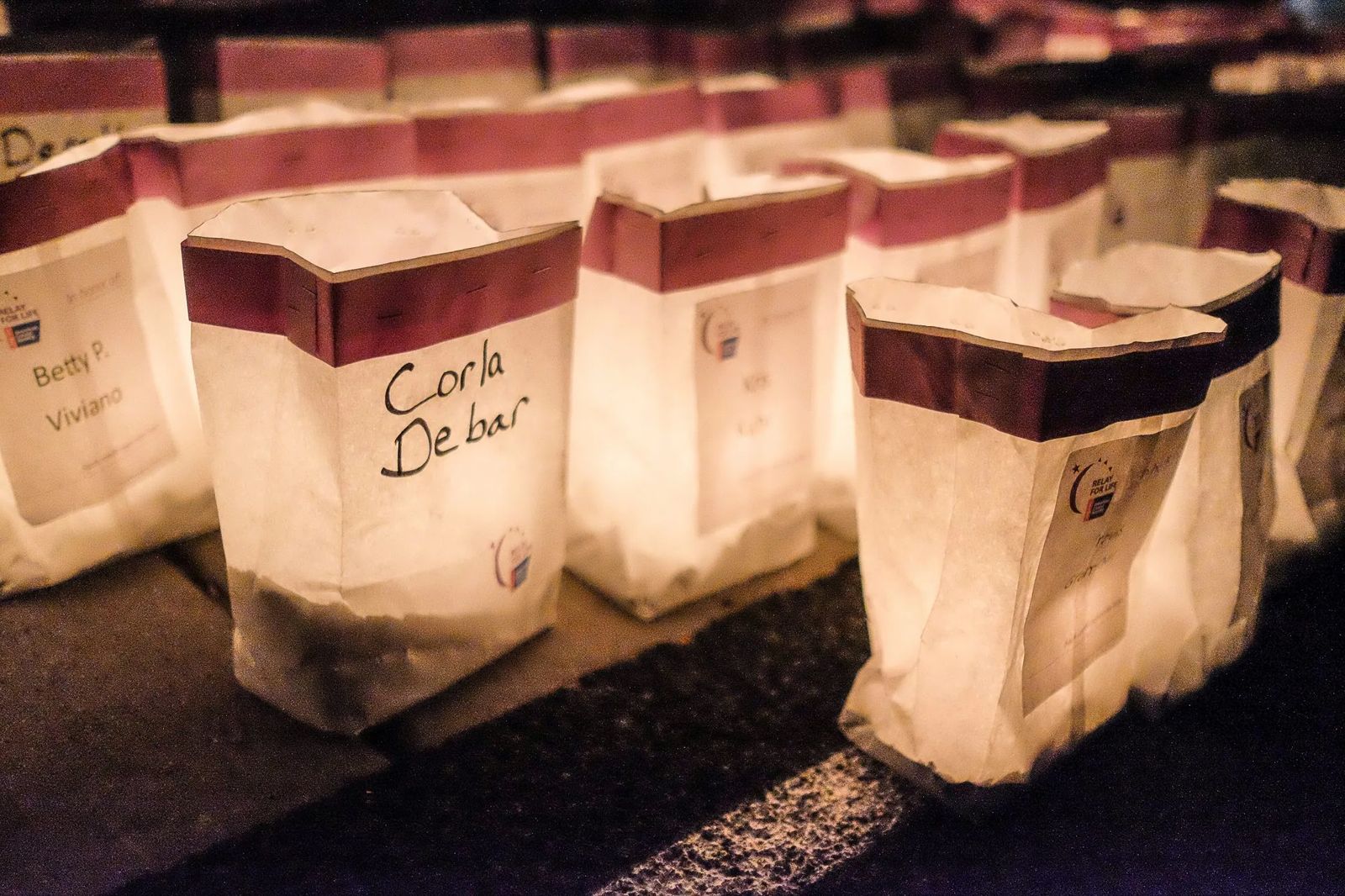 When people ask, ‘Does the money raised stay local?’ Both Vicki-Lynn and Megan are quick to point out that cancer doesn’t have boundaries.

"I have lost three grandparents to cancer,” Megan says. Her husband lost his dad to liver cancer. Her stepfather of more than 30 years was recently diagnosed with prostate cancer. “Here’s Mike, my step dad, who found out he had cancer from a simple blood test and a quick biopsy thereafter.” He underwent surgery and doctors have since deemed him cancer free. “When I think about my step dad, who is essentially cured from prostate cancer, that’s more than local to me. That’s personal. That’s because of research that’s been done to advance cancer care. He’s going to die from something else.”

For Vicki-Lynn, her involvement over the years has sparked not just fundraising efforts among her friends, it sparked conversation. One of her friends was able to open up and talk about her skin cancer diagnosis, which in turn caused her group of friends to get checked. She knows ACS research helped uncover the so-called breast cancer gene, BRCA1 and BRCA2. “I know that I for one, having breast cancer in the family tree, I now I have the opportunity because of what the American Cancer Society has done to get my DNA tested. I want to do that and I want other women to be able to do that.” When she looks at reach of the Relay, she says, “That’s what it’s all about. Relay breeds conversation and awareness.” 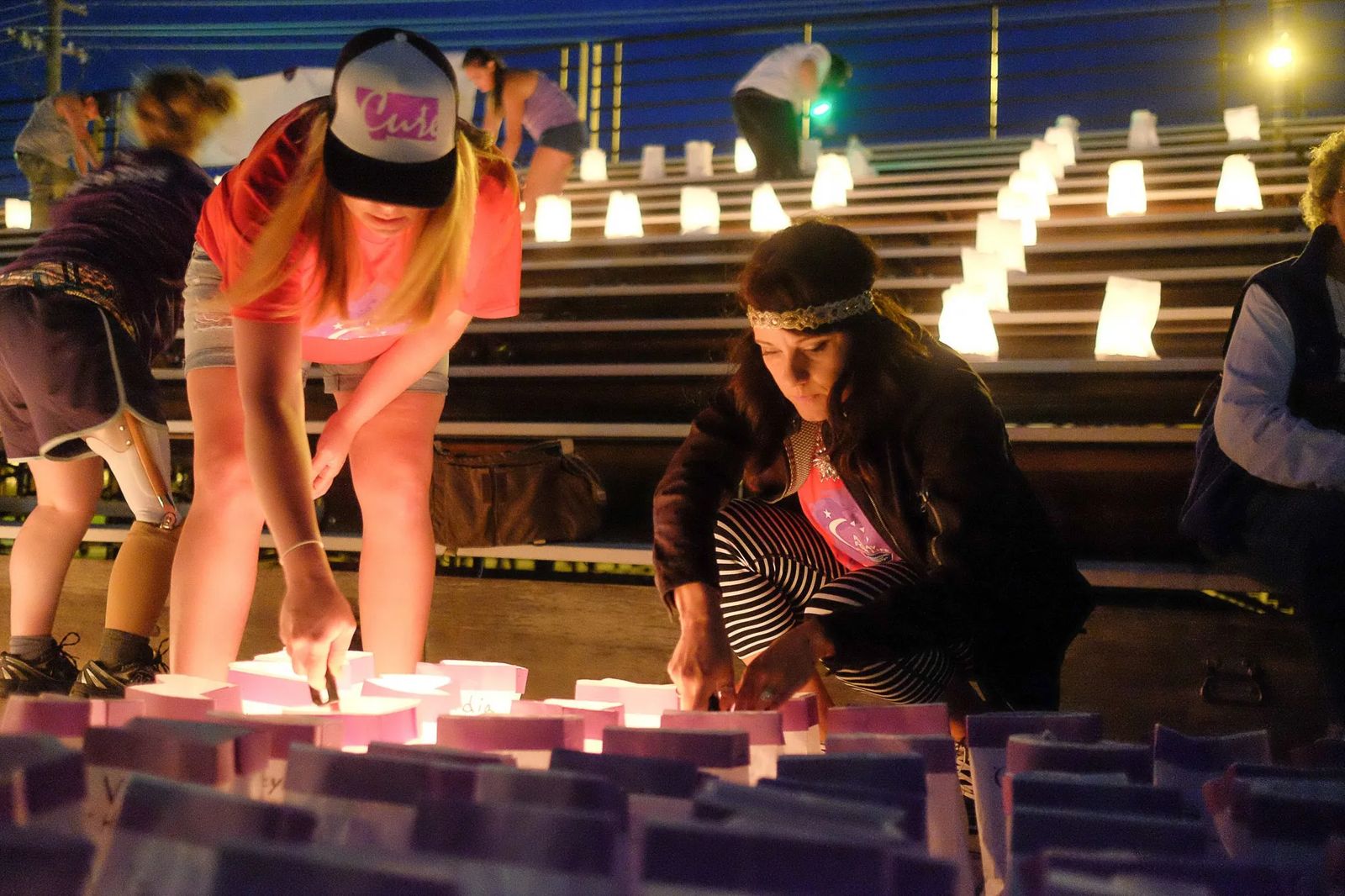 This past year, Vicki Olson Johnson stepped in to chair the 2016 Relay with Steve Solberg. As a cancer survivor and past chair, she says she looks at these two young and vibrant leaders and knows our hometown relay is in good hands.

“The synergy between the two is absolutely magical,” Vicki shares. “They almost don’t have to say anything, they know what the other is thinking. Each is a strong, talented woman individually, but when the two of them are together, I am not kidding you that is a force to be reckoned with.”
She truly feels that having these two at the helm will draw in another faction – a younger faction – the future of this community’s Relay for Life.

“Vicki-Lynn’s fiercely competitive and a total workhorse, so she keeps us constantly moving forward.  On the flip side, when things get a little intense or we start taking ourselves too seriously, I can pop in and say, ‘Hey! Are we all still smiling?  Are we all having a good time?  Do we all remember why we’re here?’  Once we’ve checked ourselves, we laugh and our shoulders drop and that’s when the magic happens.” ~Megan Kongaika

When asked if they are ready to spend more than half of the year to help pull in more than a half million dollars to fight cancer, Vicki-Lynn takes a deep breath and says, “We’re as ready as we’ll ever be!” Keep in mind, both have demanding full time jobs to begin with. Megan handles community relations for Billings Clinic. Vicki-Lynn is in charge of interactive media at PayneWest Insurance. Both underscore that it takes hundreds of volunteers and neither will ever feel that they are in this alone. 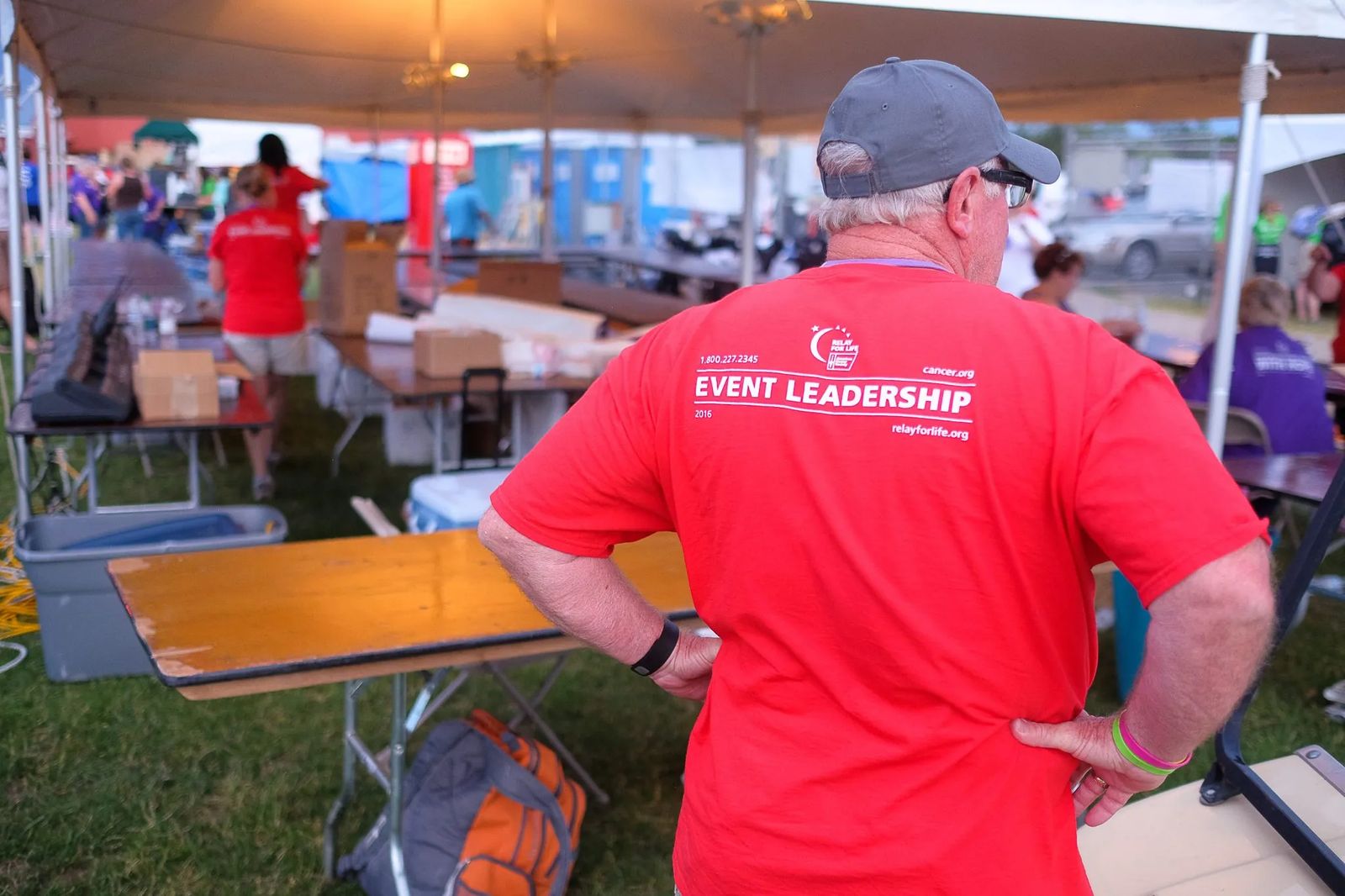 “We have a large committee who puts this thing on and literally pours their heart and soul into the event,” Megan says. “The community owns it.  And as long as they want it, we’ll be here.”

One person Megan wishes was still here to witness this emotional, celebratory, inspiring and challenging event is her dad. “I just think he would be blown away by how my personal involvement has grown.” While he’s not here on earth, she knows he’s always there with her in spirit. “Every year I find my dad’s luminaria and I say, ‘I’m still here Dad, and I am still doing what we need to do.’” 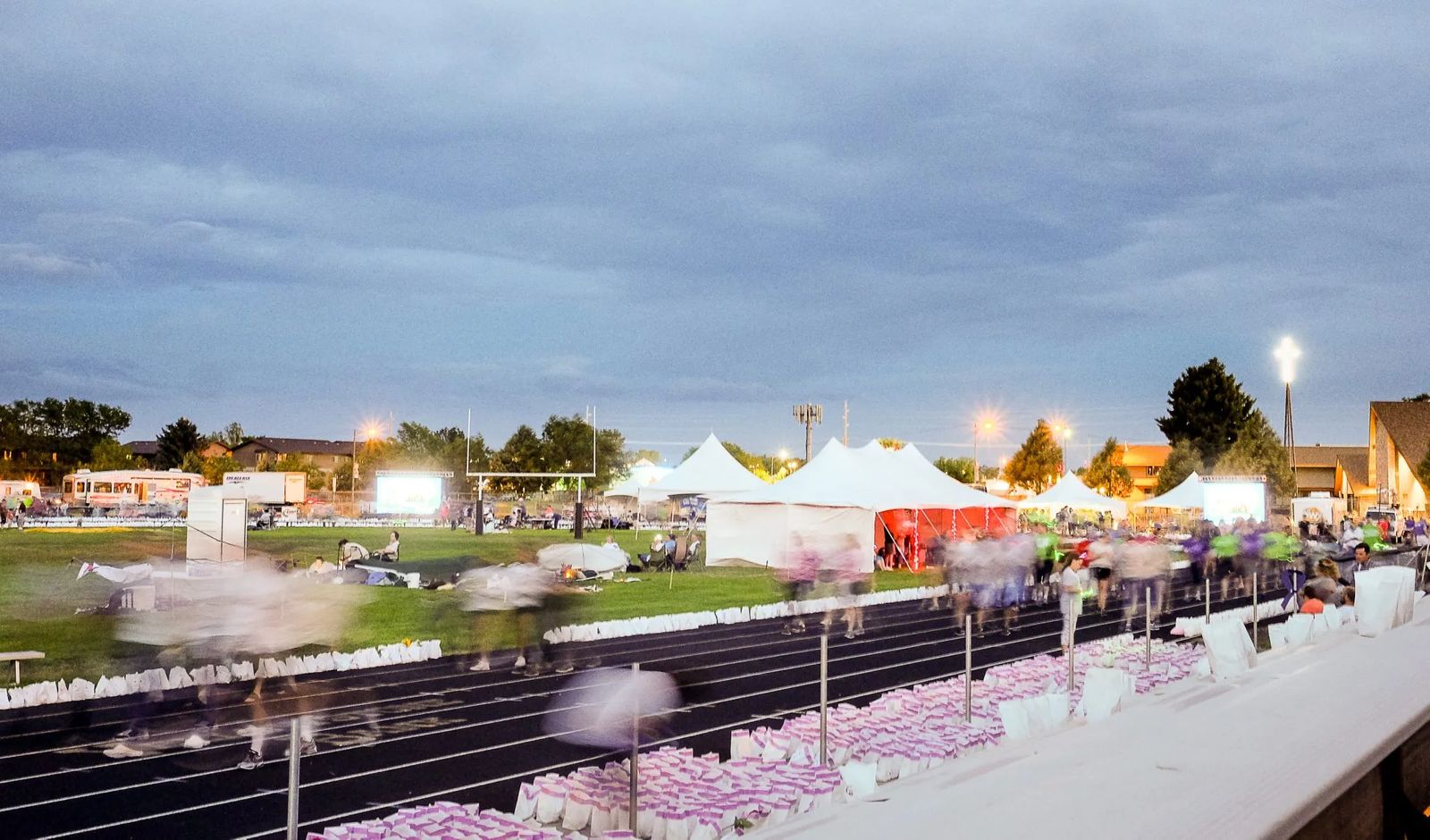 CELEBRATE HOPE
A look at Yellowstone County Relay for Life

This year 162 teams with 1,736 walkers joined the crowd of more than 7,000 spectators to celebrate. A record-breaking 700 survivors walked in the Survivor Lap.

This year’s Relay raised $537,000 so far, with fundraising to continue through August.

Since its inception, Yellowstone County’s Relay for Life has brought in more than $8 million in cancer research and funding to support local programs.

WANT TO WIN A NEW SET OF WHEELS?
Relay for Life fundraising continues through August

If you want to help out Yellowstone County’s Relay for Life and have a shot at winning a 2016 Chevy Impala, come by the American Cancer Society Office at the corner of 19th and Central Avenue for your chance. Montana Chevy Dealers donated the vehicle and all it takes is a $5 raffle ticket for your shot at winning. Want to up your chances? Buy five raffle tickets for $20. The drawing will be held in September.

890 rides through the Road to Recovery program were provided

Yellowstone County’s Relay helps the ACS to be the second largest funder of cancer research in the world, second only to the federal government. Visit cancer.org to find out more about how the ACS is working to change lives.

Braving the elements with these savvy tips

Try these summer sippers to cool off any kind of day

Caring for the community & leading public health through partnerships

A Voice for Her