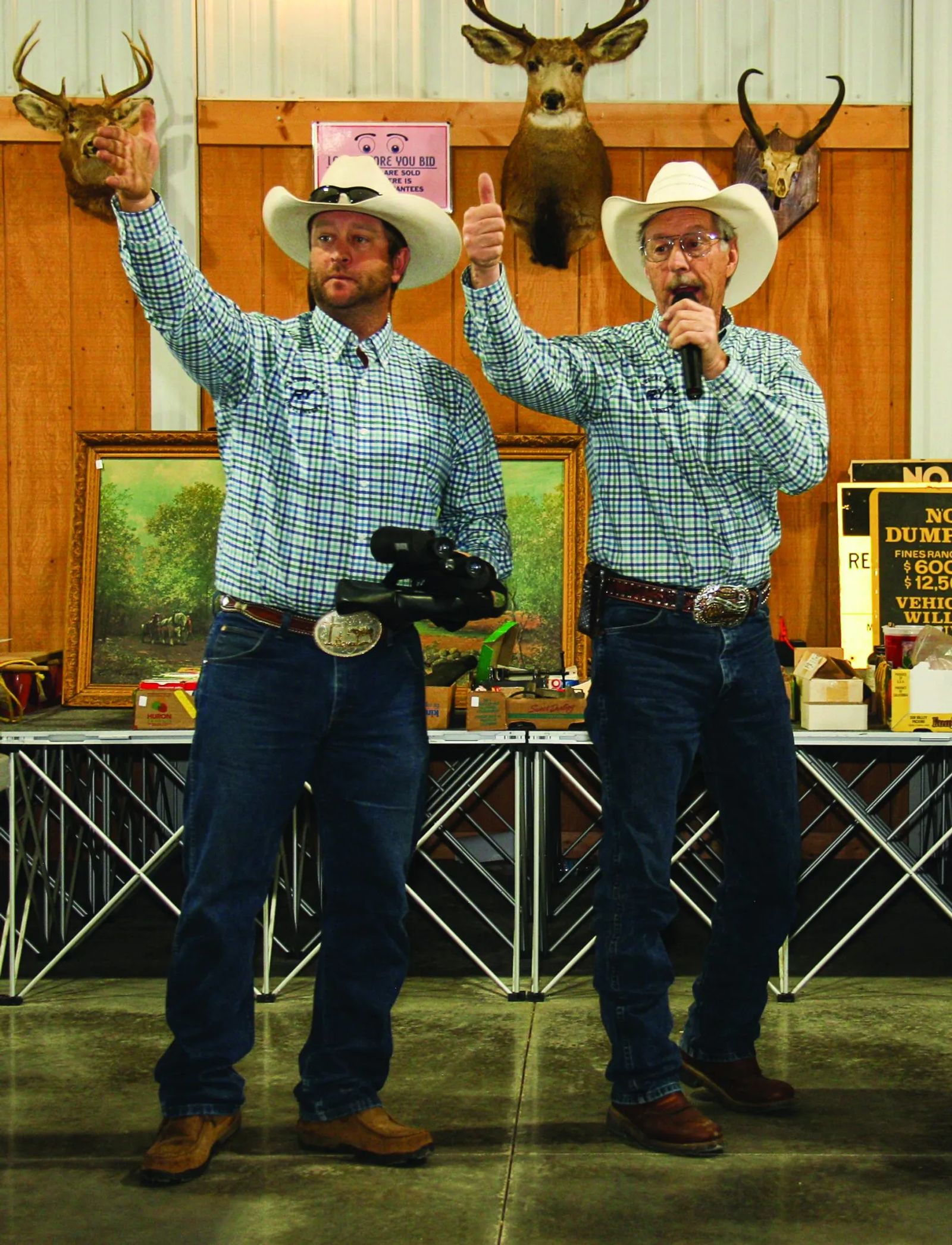 All in the Family

It’s at least an hour before Rick Young will flip the switch on his cordless microphone, but the parking lot at the Anipro Event Center south of Absarokee is already full. Everyone is inside milling around long tables and displays of miscellany ranging from a mummified baby alligator to a riding lawn mower.

To an auction newcomer, the variety is astounding, but it’s all in a day’s work for auctioneer Rick Young. The variety – collectibles, guns, antiques, furniture, tools, and equipment – is typical for an estate auction. At this particular sale, held in August, Rick sold hundreds of items including an extensive collection of handcuffs and leg shackles, a collection of antique license plates, an assortment of brass knuckles, and 75 guns. 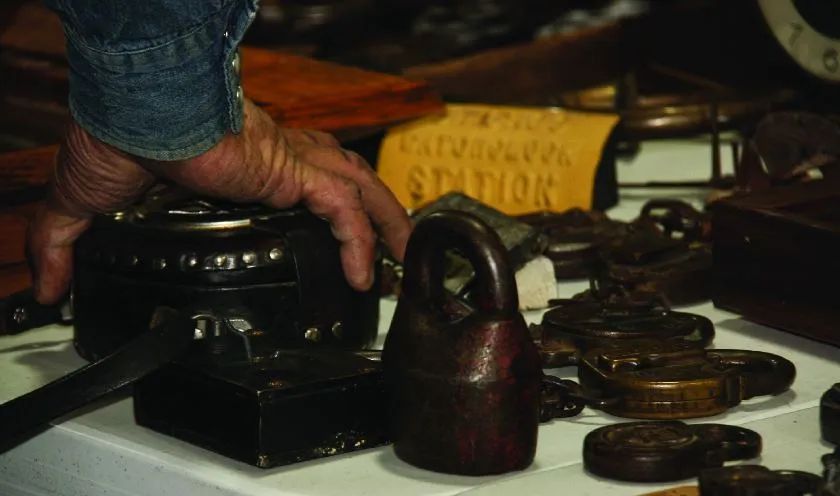 Rick ran the auction with his distinct auctioneer’s chant while his sons Clayton and Brian called bids. His grandson, Logan, 9, held up items for display. Behind them, Mindy Young, Brian’s wife and Logan’s mom clerked the sale, tracking the bid numbers and final sale price and sending it by computer back to the cashier’s office, where Rick’s wife (and Clayton and Brian’s mother) Peggy, handled the final transactions.

Rick has been auctioneering for 40 years with Peggy at his side the entire time. He first got the bug for auctioneering when he was riding colts at a ranch outside Livingston where his bunk mate was a young self-taught auctioneer. Even before then, he was enchanted by the auctioneer’s chant. It took him back to the days of his childhood when he attended horse auctions with his father.

He married Peggy in 1975, and the two settled in the Stillwater River Valley. Rick talked about attending auctioneer school for two years before Peggy said, “Oh, would you just go?”

Rick borrowed money from his brother for tuition, and left for school. When he graduated, Clayton was a year old, and Rick wasn’t sure how he would make a go of his new career.

“I was fortunate because in this area there was an old auctioneer who called me to help at a few of his sales,” Rick says.

In those days, every community had an auctioneer and it was a primary way of selling anything and everything. It wasn’t long before the old auctioneer retired, along with another auctioneer in Red Lodge. It opened a door for Rick, and within a few months, he was busy handling sales throughout the area.

The business grew and along the way, Rick and Peggy raised four sons, Clayton, Brian, Jeremy and Travis. Clayton, Brian, and Jeremy have followed in their father’s footsteps and are auctioneers as well. Travis has chosen a career as a horse trainer, but he’s done his share of auction work and still helps out from time to time.

Everyone is on hand on sale days. From left, Dylan Young, 15, helps his father Brian watch for bids. His grandfather Rick is at the microphone while his little brother, Logan, 9, helps display the items. Clayton, Rick’s oldest son, calls bids, while Brian’s son, Colton, 13, also helps watch for bids.[/caption] 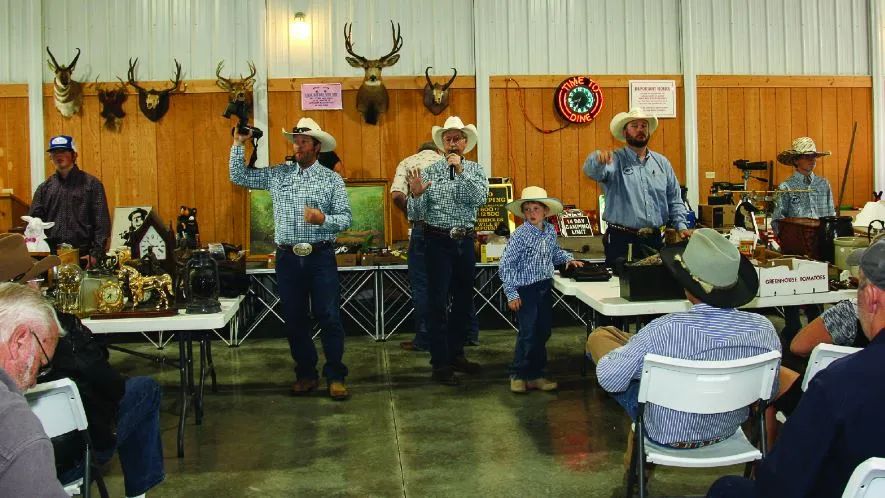 “They started when they were barely old enough to get up on a trailer and hold things up for me to auction,” Rick says.

The boys eventually grew into men and brought their wives and 10 grandchildren into the business. Not everyone is required to work the auctions, Peggy says, but everyone who pitches in is paid a fair share, even the youngest. A couple of their grandsons have already started learning to auctioneer, and are allowed to sell a few items at sales to gain experience.

In 40 years Rick and Peggy have seen it all.

“I think we sold everything you could possibly sell and then some,” Peggy says. 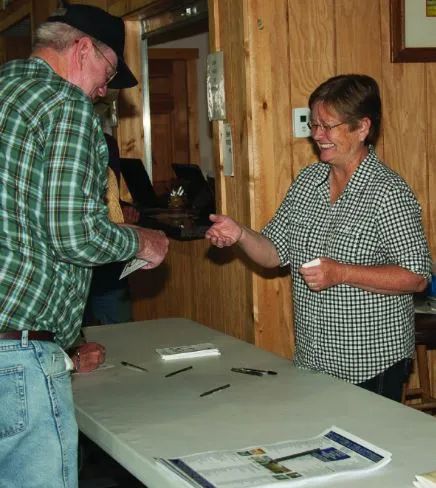 Years ago, there was a thin gold wedding band that went for $11,000. Two brothers weren’t getting along at the time of their mother’s estate sale and each one wasn’t going to let the other have the ring, Rick says. What stood out in the whole incident was that the money the one brother spent to get the ring along with the rest of the income from the sale was split between the two of them when the auction was over.

“A large part of the auction business is death, divorce, bankruptcy, estates and retirements,” Rick says.

He takes a careful approach with families because he knows they’re in a difficult, emotional place. His genial, patient personality usually puts families at ease. That approach came in handy when Rick went to Jordan to do a court-ordered liquidation of the property seized by the FBI during the Freemen Standoff. Going in, Rick knew it would be touchy.

“I just walked over, and stuck out my hand and introduced myself,” Rick says. “I told them I was just the guy that was hired to do the job and I hope we can get along.”

The sale went off without a hitch, but they did get a sheriff’s escort out of the area later that night.

During the sale, a pallet of cardboard boxes filled with papers and manila file folders came up for auction. The action was hot as Freemen bid against the FBI. The Freemen ended up with the papers, leaving everyone wondering what might have been in them.

After decades of experience, Rick has become an expert in reading people, and providing that gentle, persistent encouragement to keep bidding.

“You’re standing up in front of three, four, 500 people, and you have to figure out what they want to do and encourage them to do something they might not want to do,” Rick says. “I know I’m responsible for people building new storage sheds for the things they bought and don’t need.”

Rick and his sons have been at it long enough that they’re liquidating the estates of some of their longtime auction-goers and selling many items a second time.

These days, there are fewer auctioneers, but the need for auctions will always be there, Rick says. It’s the most efficient way to sell a large lot and get the best price possible. A good auctioneer is expected to know the value of what he is selling, and for almost every sale, there are a few things that Rick needs to research. He often goes online to see what things are selling for elsewhere, but he is always cautious. Because something is going online for a price doesn’t mean it will sell for that price at his auction. It all depends on who attends.

“An auction is true price discovery,” Rick says. “If you have 500 people here at an auction, they’re going to tell you how much that item is worth.”

Rick Young and Sons auctions always draw a crowd. It’s not uncommon to have 300 people or more at an estate sale, and their big fall consignment sale in October has drawn up to 900 people. Every sale is like a family reunion, with coffee and donuts for breakfast and burgers and brats for lunch, supplied by the Masonic Family in Absarokee.

“We have folks who have come to our sales with us for 40 years,” Peggy says. They have become like family. We’re even responsible for one couple getting married. They met here, going to auctions.” 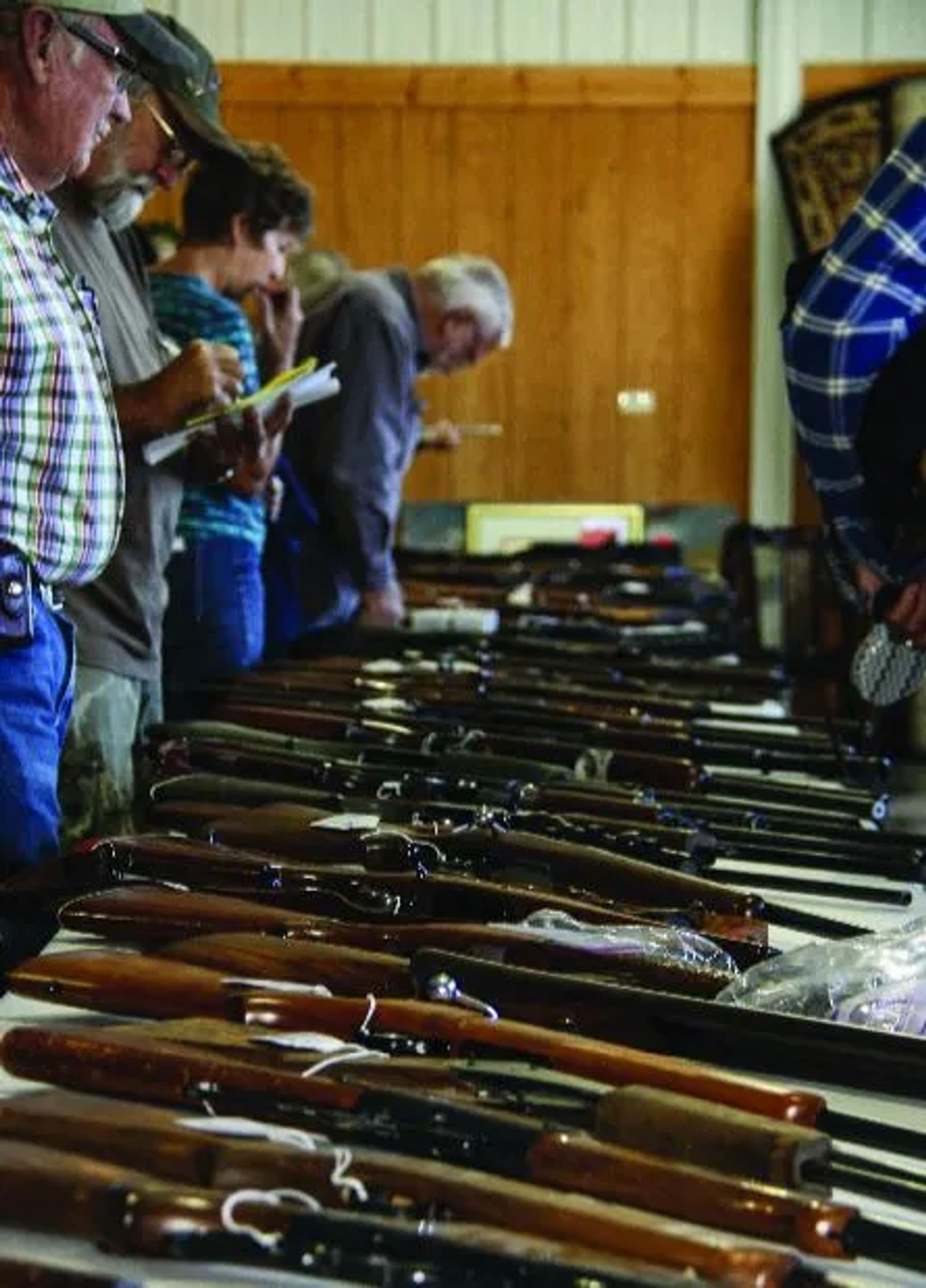 Guns are one of the biggest draws at every auction. Most sales include at least a few, and it’s not uncommon for Rick Young and Sons to sell more than 50 guns at an estate auction. Thousands of guns change hands at their auctions every year. Although it’s not required, Rick Young and Sons holds a Federal Firearms License. They run background checks on everyone who buys a gun at their sales. It only takes a few minutes for a buyer to be approved, but it provides Rick and Peggy with peace of mind.

“You just never know,” Peggy says. “I don’t want us to sell a gun at an auction and find out that it was used in a crime later.”

Rick Young and Sons is known for running an efficient, professional sale, and Peggy prides herself on providing polite, friendly service at the registration desk and cashiers office. On sale days, she’s passing out more smiles and hugs than numbers at the registration table. Peggy and Rick know that if someone has a positive experience they’ll buy more and come back. It’s how they’ve built their business, because in the end, all Rick really has to make a living is a microphone and a P.A. system – and his reputation.

“As an auctioneer, they have to have confidence in me,” Rick says. “It’s not hard. You just do what you tell people you are going to do.”

YOU CAN VISIT RICK YOUNG & SONS at rickyoungauctioneers.com.