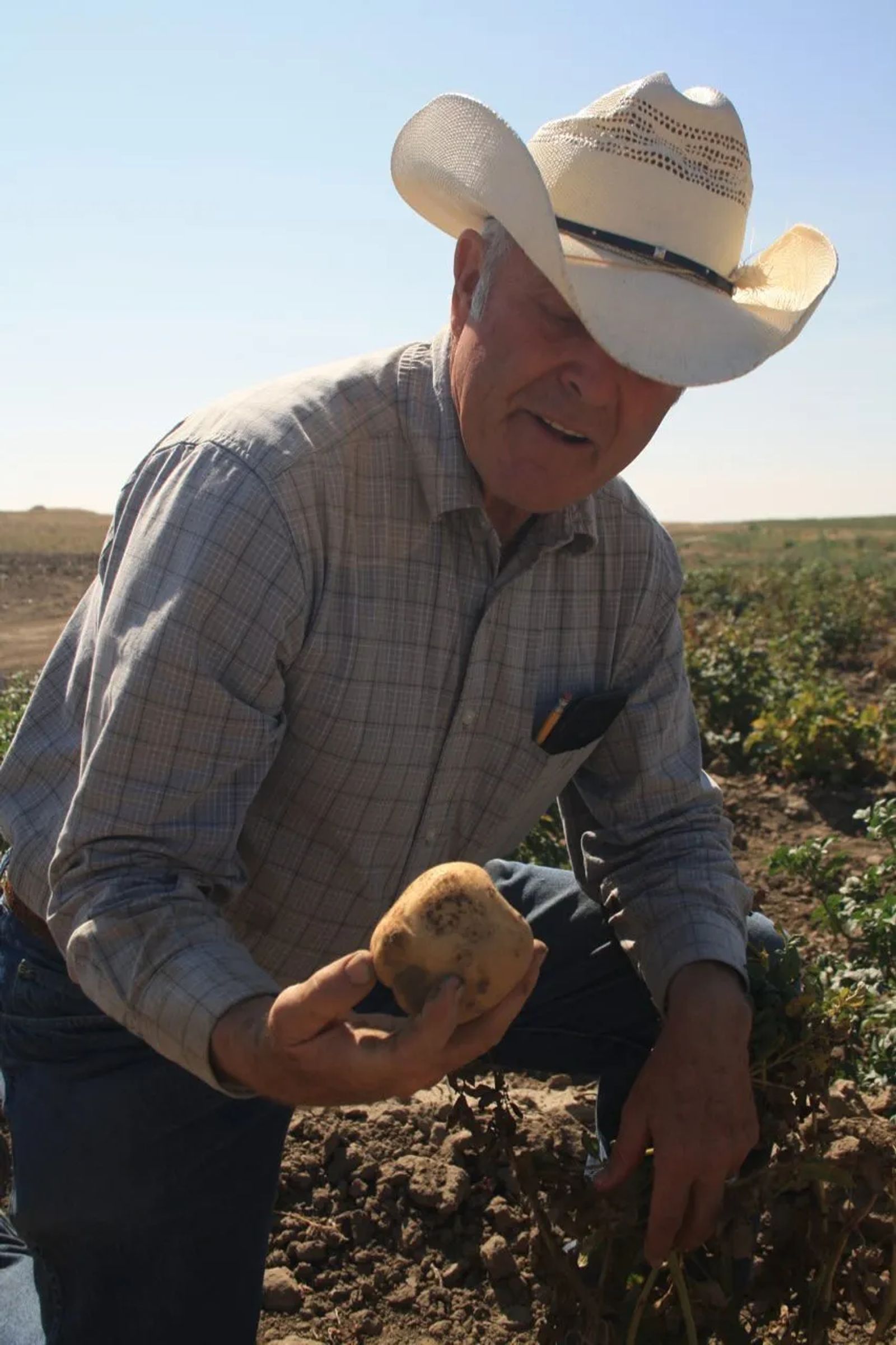 There’s more than one way to utilize a safflower plant or industrial hemp for that matter. And while most farmers shudder at the lack of rain for weeks – even months – at a stretch, Big Sandy organic farmer Bob Quinn takes it in stride. For Quinn, problems are opportunities making every crop, and every day, a learning experience.

Growing up on the family farm pioneered by his grandfather in 1920, raising crops was in Quinn’s blood, which inspired him to pursue a bachelor’s degree in botany and a master’s in plant science from Montana State University in Bozeman, along with his doctorate in plant biochemistry at University of California at Davis. With his keen mind and extensive education, when he returned to the Montana farm in 1978 he brought new ideas with him.

One of the biggest leaps was transitioning their conventional growing operation to organic in the late 1980s, spearheading this direction with the guidance of a small handful of organic farmers in other states. From this initial step 30 years ago, it’s now all about trying to keep up with what Quinn thinks of next.

Even before moving back to Montana, Quinn had the idea of creating a snack similar to the popular Corn Nuts using a novelty Khorasan wheat reportedly discovered in King Tut’s tomb. And while the colorful story didn’t prove true, nor did a deal with Corn Nuts® materialize, the reality is this ancient wheat was a favorite with everyone who tried it.

Recognizing a unique niche, Quinn registered it as Kamut® Khorasan wheat and created Kamut® International.  Now, this once novelty wheat is grown on organic farms throughout the United States and Canada with an international following because of its sweet, almost nutty, flavor, combined with high protein content and exceptional nutritional qualities. It’s also well-received with those who have gluten intolerances since it is more easily digested.

But never one to rest on his laurels, Quinn is continually raising new grains and new varieties of trusted ones. From a purple wheat, he saw in the hands of a Danish friend at a food expo in Germany, to einkorn, emmer, spelt, and innumerable other varieties, Quinn wants to see what grows best under the dry conditions of this region.

He’s even trialing over 110, 5 grams at a time, of other Khorasan wheat varieties collected by seed banks throughout the world. “Spring wheat is becoming riskier,” says Quinn noting the pattern shift of hotter and drier springs. “I’m looking for a winter hardy line I can plant in the fall.”

There’s even a perennial wheat that is a first being grown in Montana. “It’s from the Kansas Land Institute. I’m working with them figuring out how it might work here.” 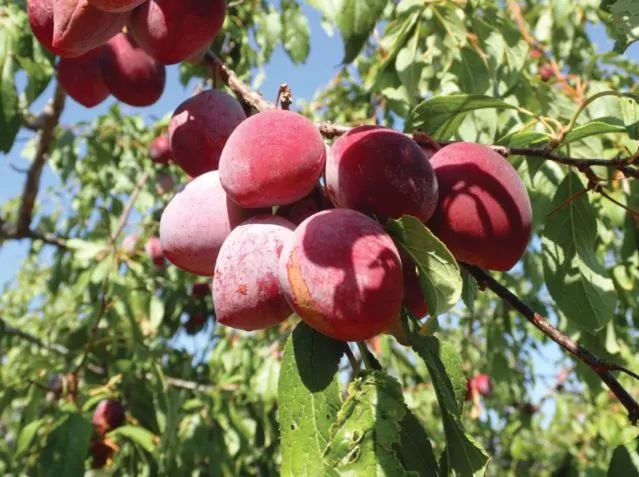 Raising Fruits and Vegetables without Irrigation

Growing watermelons in Montana is a feat in and of itself, yet Quinn raises impressive specimens without the use of any supplemental water, along with a number of fruits and vegetables most people would never consider growing in a dry land environment.

With plants laden with large fruits, it’s difficult to imagine that they’re doing so well in an exceptionally dry year. “This hasn’t had a drop of rain since mid-June,” points out Quinn. 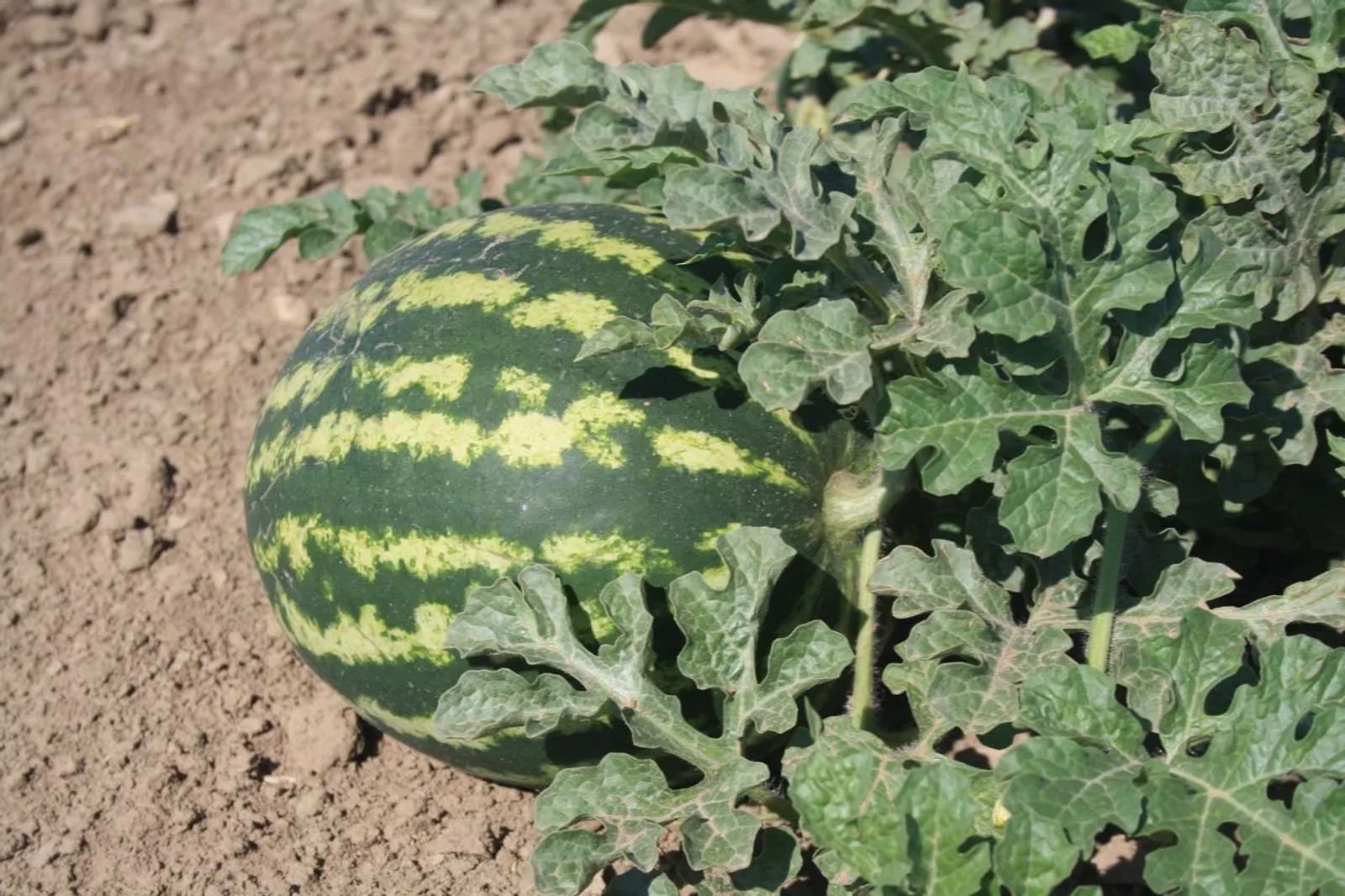 “What I’ve found, is if I decrease the population by one-third – so these plants have 3 times more room – they will have enough area to gather enough water for each plant,” he explains. And since every drop of water needs to be utilized by each plant, it requires diligence to reduce any loss of water.

“We can’t have any competition with weeds,” he says. “We have done experiments with mulching. It is a mixed bag.”

Quinn’s dry land vegetable plots are an obsessive weeder’s dream with completely clean ground except for the vigorous plants stretching along the soil. The vines might grow long enough to touch each other, but for the most part, they grow within their space taking full advantage of the sub-soil moisture. The long, twisting Armenian cucumbers remain sweet, not turning bitter, and the prolific summer squash produces as well as any traditionally garden grown plant.

In additional plots, a pumpkin patch filled with large jack-o-lanterns, along with Delicata and Carnival winter squash obviously are not suffering from the lack of precipitation this season. And, as Quinn is always looking for a new way to use a tried-and-true vegetable, he thought since the Carnival variety of squash is as sweet as a sweet potato, why not try to make fries out of it? They were a hit.

“We could have another industry in Montana growing winter squash for fries,” he says.

Painted Mountain corn, a Montana bred variety used for grinding and decoration, has nearly foot-long, colorful ears. And an enormous stand of beautiful sunflowers, grown to sell the seed, is another example of how Quinn utilizes crops in different ways. There’s even a small patch of flowers, such as cosmos and bachelor’s buttons, that are grown specifically to sell the seeds.

What is equally impressive, in addition to his dry land vegetable success, is Quinn’s fruit orchard. 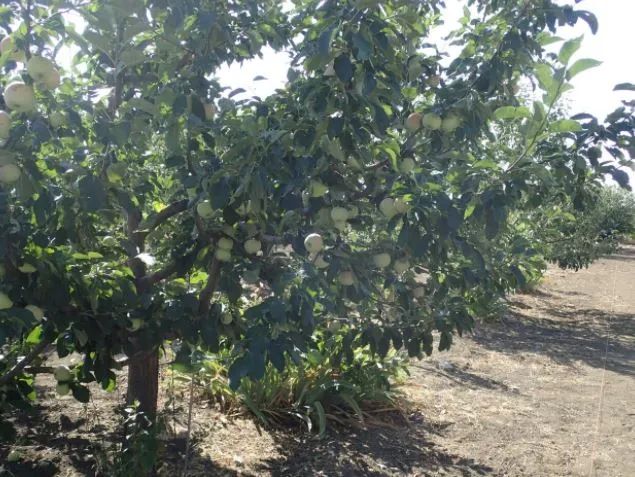 “What do we need to do to grow fruit trees on the prairie?” Quinn asks as he looks to nature for the answer. “Organic farming is only possible because we’re mimicking nature.”

In order to create more natural conditions, Quinn planted blue spruce and pine trees to create protection for the apples and other fruit trees since being exposed to the harsh conditions of the prairie would lead to their practically immediate demise. Within this enclosure of trees, as well as a high, sturdy fence to thwart resident deer who would be delighted to find such an oasis, Quinn says, “I have over 30 different varieties of apple trees. I am trying to show that we can do more than wheat and barley on the prairie.”

After harsh lessons following several extreme weather seasons, Quinn switched from planting semi-dwarf varieties to all standard trees, which are more durable and have a generally longer lifespan. The result is primarily Zone 3 trees, many of which he bought from St. Lawrence Nurseries near the Canadian border of New York State because they grow appropriate varieties for our climate.

And while there are well-known varieties such as Wolf River, Quinn’s hands-down favorite for eating is Zestar, a relatively new cultivar out of Minnesota that is hardy to -50 degrees F. This large green apple with a reddish blush is crisp and tasty, beating even Honeycrisp in flavor.

Beyond the apples, Quinn has fruit laden plum trees, pears, buffalo berry, service berries, and even sea buckthorns, which originated in Russia and are known for their exceptionally nutritious berries high in vitamin C demonstrating the extent of what can be grown in a non-traditional region. 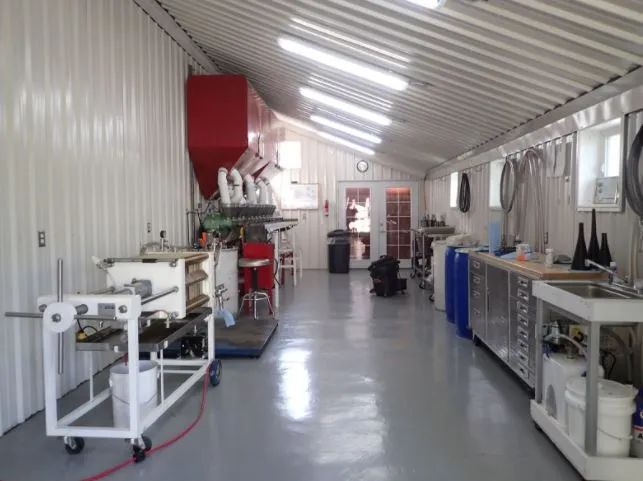 Turning the barn where he milked cows in his youth into “The Oil Barn,” an oil pressing facility, was a natural progression for Quinn since safflower is fast becoming one of their more diverse crops and industrial hemp appears to be their next viable product. Quinn’s son-in-law, Andrew Long, expertly manages the seed pressing operation.

With their organically grown safflower, they press the seeds creating a beautiful and nutritious oil high in oleic acid that they sell to an organic soap making company, as well as for cooking at Montana State University and the University of Montana, bottled for retail sale, and for use in making Kracklin Kamut®, the snack Quinn originally wanted Corn Nuts® to produce.

So nothing goes to waste, the mash by-product of the process is used as high-protein animal feed. And even a traditional waste product, the used oil from the University of Montana, is sent back to the farm to be used as fuel for the tractors.

Utilizing a water heater to remove any moisture (since they do fry frozen foods in the oil) from the oil, and after filtering it to 3 microns, it can be used directly in the tractor. Quinn says, “The engine has to be started with diesel,” but once the safflower oil is warmed through a heat exchanger attached to the tractor engine, it runs on pure safflower oil. Tests prove the vegetable oil running at 94 percent of the diesel efficiency. “It is so close we can’t tell the difference when the engine switches from diesel to vegetable oil,” he says.

The vegetable oil has one limitation, but it’s not significant for how they use it. “We can’t use it in the winter, but guess what? We don’t farm in the winter,” he says.

He envisions a time when the oil that is produced on the farms can return to them to use as fuel for the agricultural equipment, thereby reducing fuel costs.

One of Quinn’s newest endeavors is stepping into the realm of industrial hemp production. After working for 3 years with government agencies, he was finally able to plant the 3 types of hemp through the DEA approved process made possible because of the 2014 Farm Bill (following the 2001 Montana Senate Bill 261) opening up the opportunity to grow this valuable, non-psychoactive plant. 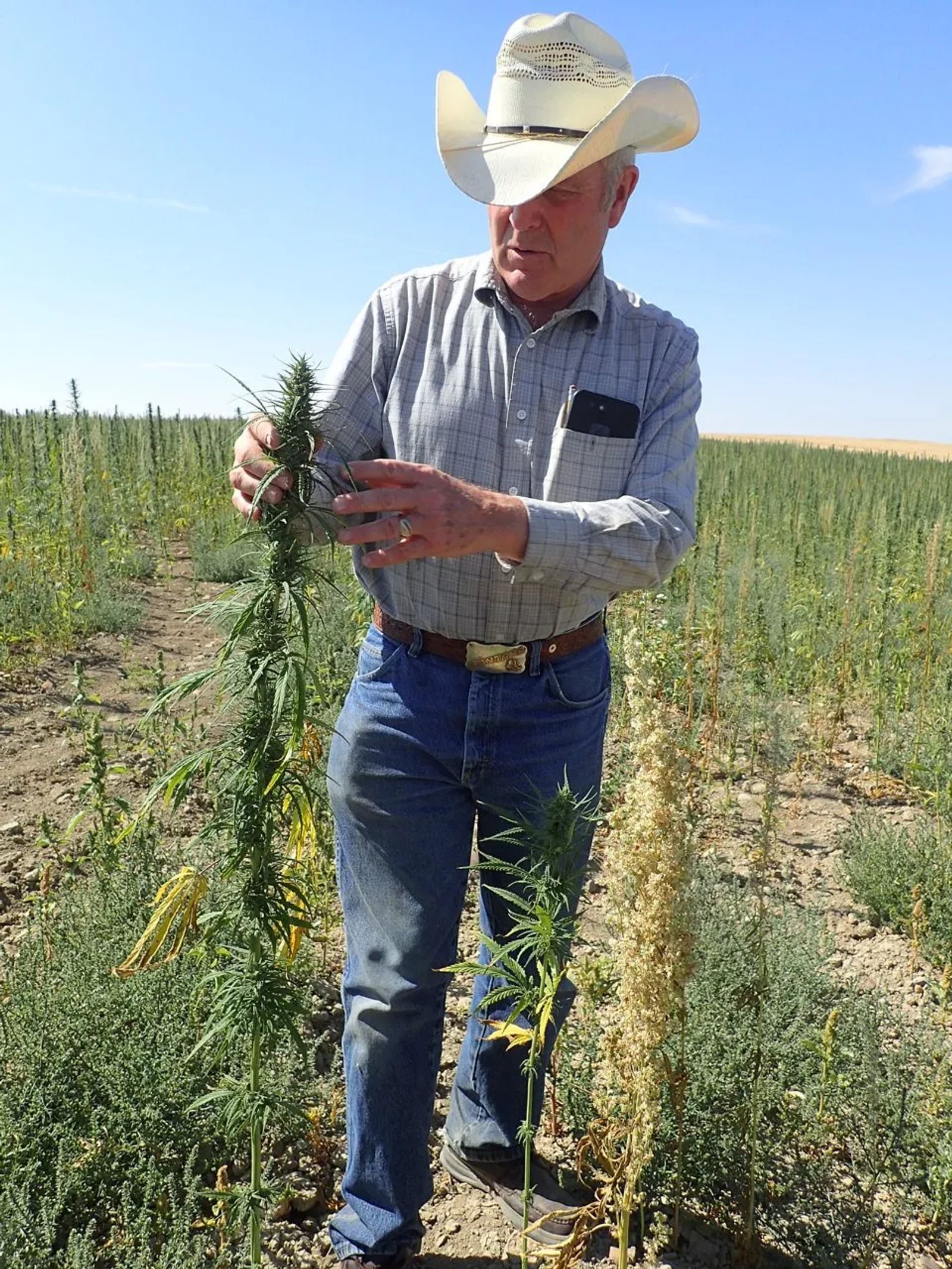 “We’re going to crush (the seeds) and make oil with them,” Quinn says. “The mash can be sold as a protein powder and the by-product of the plant itself left in the field can be used to make paper.”

Just because something hasn’t been done before, doesn’t mean Quinn won’t try it. Always thinking outside of the box, he has never been satisfied with the status quo, especially when it comes to creating a new and better crop or method. With a perceptive mind going a thousand miles an hour, he sees the world with the eyes of someone who wants to make family farms viable again. Whether this is through specialty crops, or through reducing costs by using a homegrown fuel in the equipment, he will figure out the process so other farms can choose what is right for them.