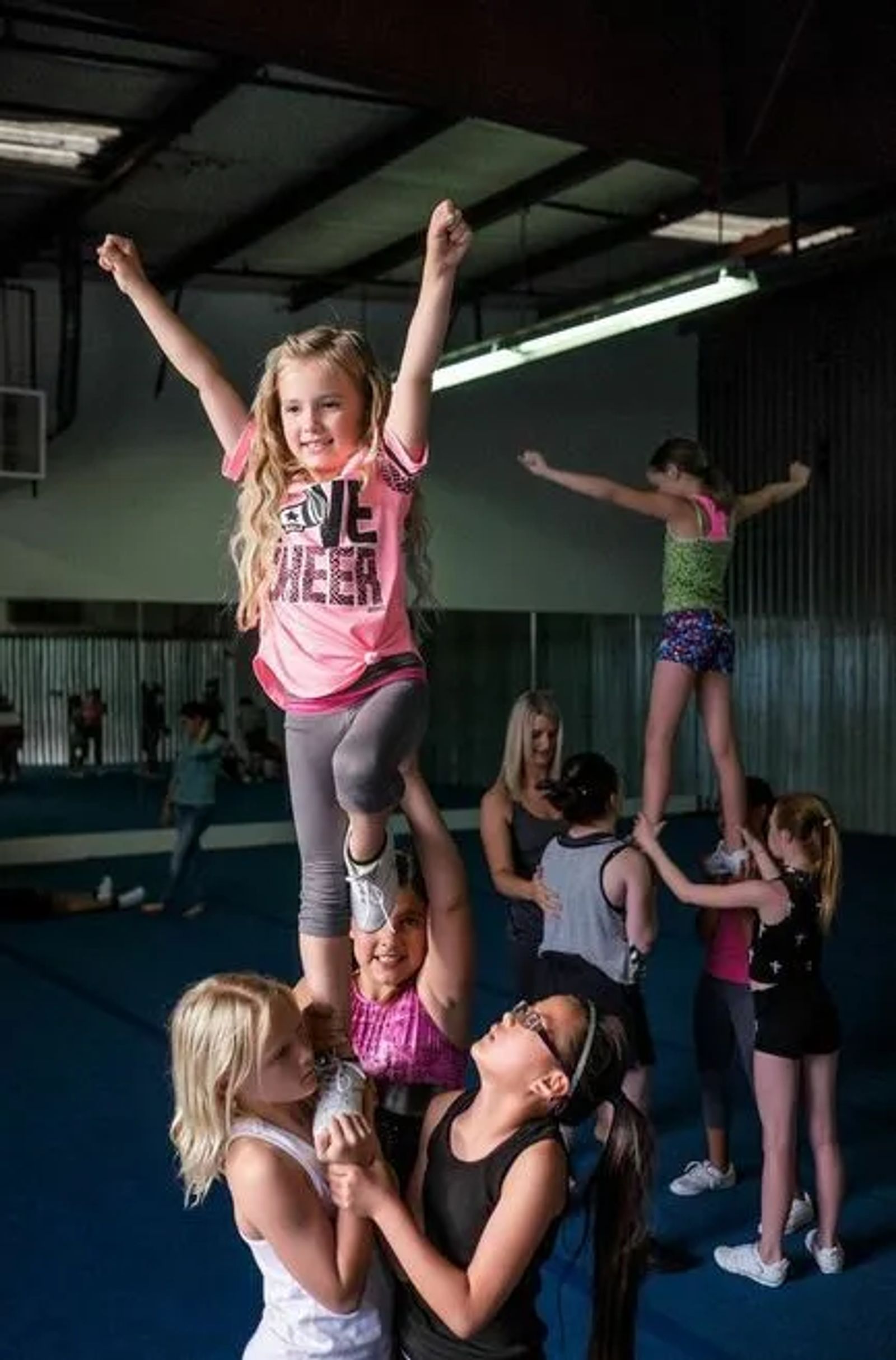 In an unassuming gym situated off Grand Avenue, you can hear the base thumping and shouts from coaches and kids as you walk up. "One and two and three and four...." can be heard with a military-like cadence. Walk inside and you"ll see kids as little as 3 and as old as 18 spinning, flipping, kicking and literally flying through the air.

This is Billings All Star Cheer, a gym designed to train athletes for all kinds of head-to-head cheerleading competitions. 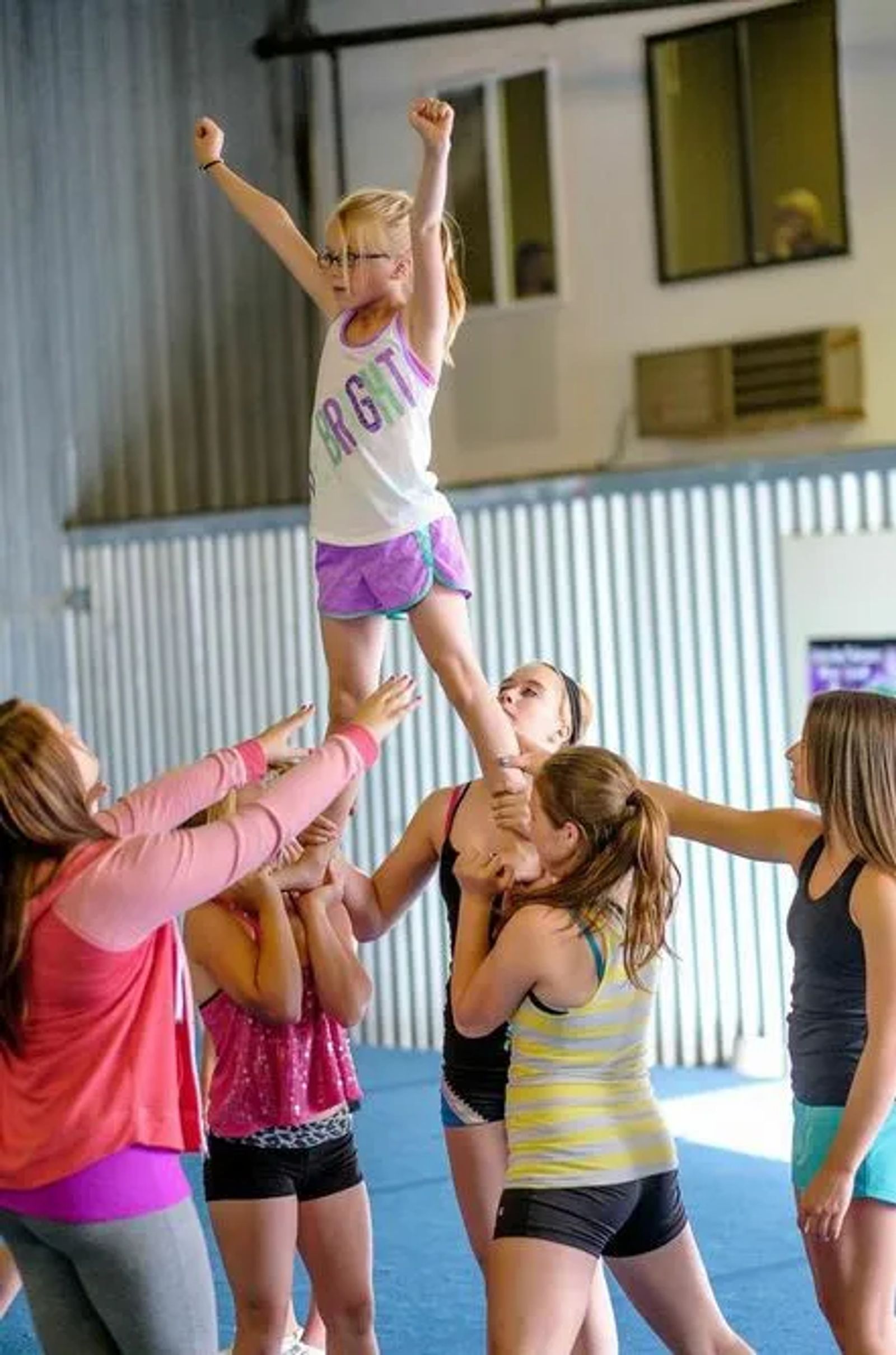 Gone are the days when cheerleading was nothing more than a sideline activity. Teams were put together simply to raise a little school spirit and hype up the crowds. Today, coaches maintain that what they are creating are elite athletes that tumble, stunt and cheer with an eye on complete synchronization and style.

"Bringing all star cheerleading to Billings, Montana shows them a whole new world that has never been here before," says Piper Stanaway, co-owner of the Billings All Star Cheer gym, the first of its kind in town. This former University of San Diego Cheer and Dance member knows first-hand that cheerleading has evolved. Her business partner and mother, Tracy Stanaway, brings a vast dance knowledge to the gym after owning and operating Tracy"s School of Dance for 28 years. Both are now busy trying to recruit the next generation of competitive cheerleaders. "It is a very athletic sport," Piper says. "It takes a lot of dedication and a lot of passion to want to do it." These cheerleaders not only have to cheer and dance, they have to incorporate all levels of gymnastics into their routines. 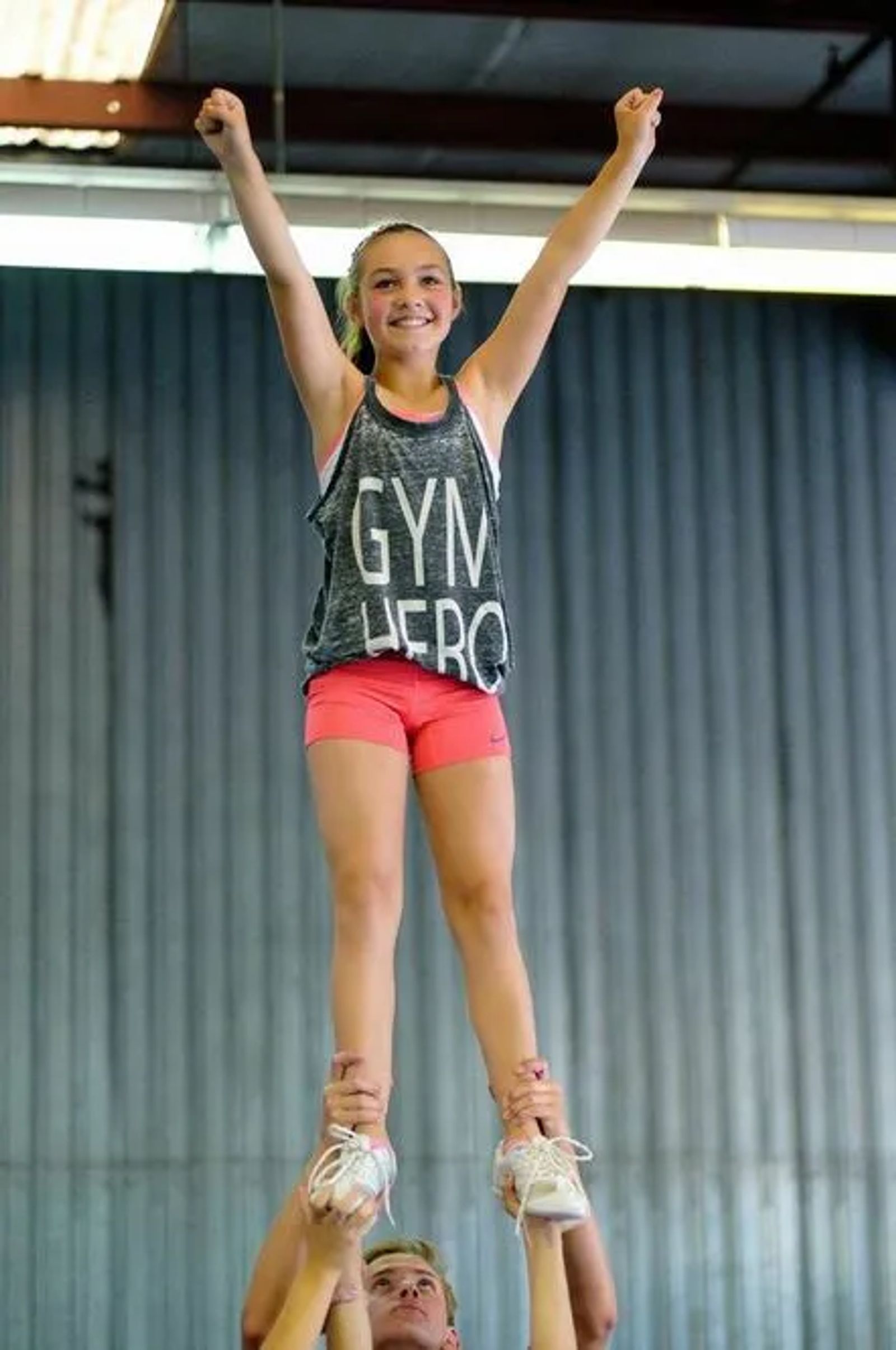 Off to the far end of the gym"s spring-cushioned floor, 12-year-old Abby McCall is being hoisted overhead, lifting her leg in a classic cheer pose. She was one of the first kids to sign up after the gym opened in August of 2013.

"I am a flyer, so it is really fun for me," Abby says with a smile that could light up the room. "I get to try a lot of new things. I am the one that is tossed in the air!" You can see how she ended up in this gym. She started with gymnastics and dance at an early age. Now she"s incorporating all that into one love as a member of one of Billings All Star Cheer teams called the Flares. Her team has already competed and placed in two events. Abby says, "It was really nerve-wracking hoping that you hit everything and then trying to remember what was next." She smiles and adds, "I was really proud of what we did."

You could say Abby"s love for cheer is in her blood. Her mother, Erin, started cheering in high school and worked her way into a job with the Universal Cheerleaders Association, teaching summer camps and clinics on college campuses up and down the California coast. Today, twenty years later, she"s helping coach at Billings All Star Cheer.

"When people hear cheerleading they really have preconceived notions of what that should be," Erin says. "I had those stereotypes placed on me that I had to be a certain way. I had to have a certain personality. It wasn"t really a sport. It is changing. It is changing in Montana and it is changing in Billings." Erin says these cheerleaders aren"t "jumping around and waving their hands" to get a crowd to show their spirit. They are extreme athletes. She never guessed in a million years that her daughter would want to be one of them. "She is a performer. She loves to be in front of a crowd. She said to me the other day, "Mom, this is where I find my joy!"" 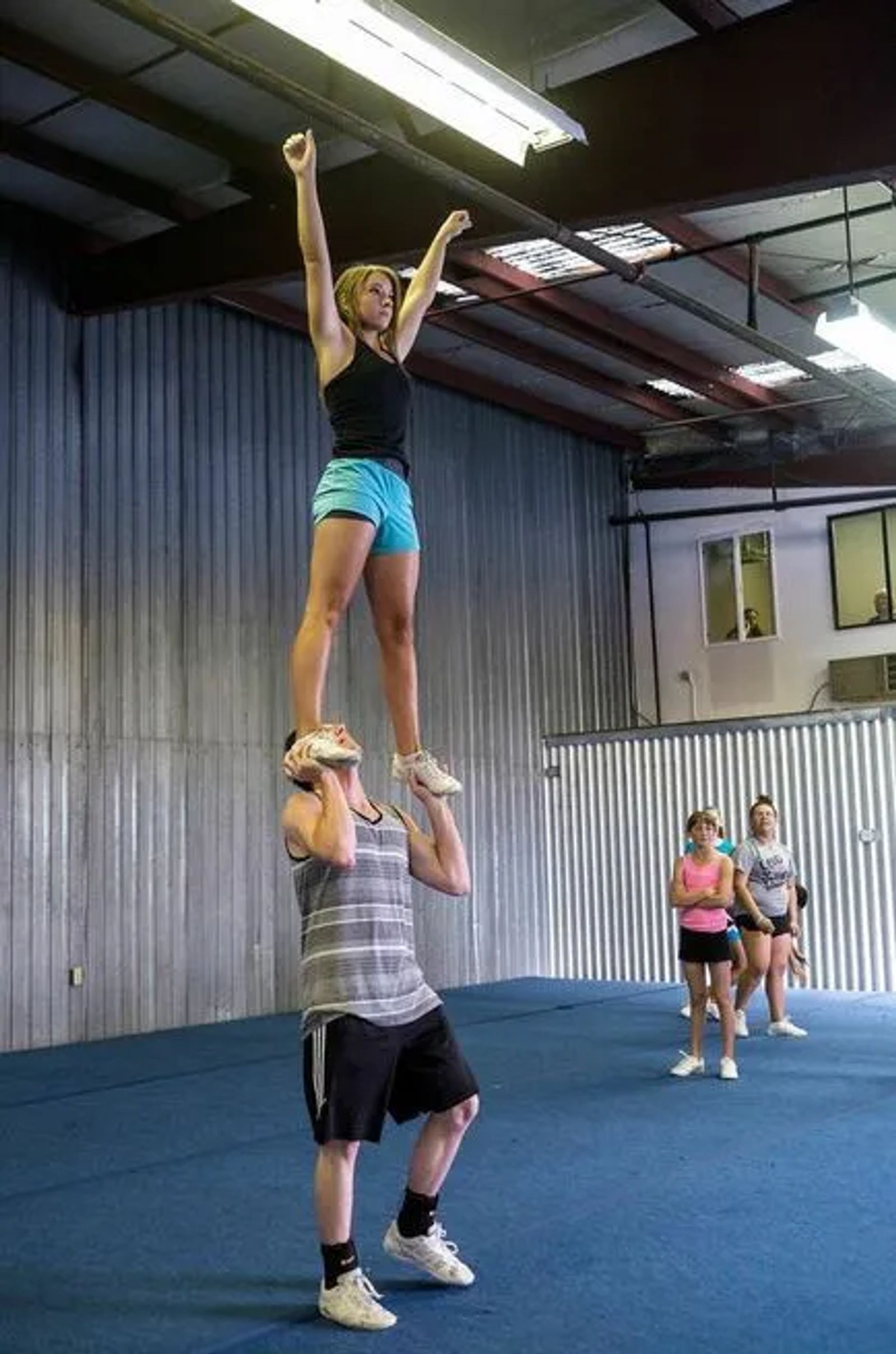 While cheerleading has been around since the turn of the 20th century, competitive cheer has really only existed for the past 40 years when stunts started to make their way into routines. Today, competitions take place in cities from coast to coast and a few times a year you"ll find ESPN televising a handful of world cheer and dance championships, which remain some of the most elite competitions to win.

While Billings All Star Cheerleaders aren"t ready for that level of competition yet, Piper stays committed to safely teaching the basics. "It"s all about technique," she says. "They start low to the ground so that they get used to that progression."

The gym has more than 100 students who work and practice for several hours a week to develop their skills. Even though dance, stunting and tumbling are all emphasized, Piper admits that one of the lessons learned is valuable both on and off the competitive mat. "We have given them character skills that they can take and apply to anything they do in life. Even if it"s not going and teaching everybody how to do a back tuck or a toe touch or a stunt, they have learned that teamwork."

Thirteen-year-old Sidney Romero is proof of that. She stumbled onto the gym after her aunt saw a message on Facebook. After attending the open house last year, she"s been on the mat ever since, working with her team on one routine all year long to get ready for some stiff competition. "It is a really good rush. It feels really good when you get off the mat and you know that you"ve done a really good job!" After performing under the lights at one competition at the University of Montana, Sidney knew she found her new love. As she looks back at some of her teammates say says, "It feels really good to see how far you"ve come as a team. You grow to have a really close bond."

For Piper Stanaway and her team of coaches, that"s music to their ears.

"When you watch them perform and you get to see them work hard," Piper says, "you can feel how much they love it." 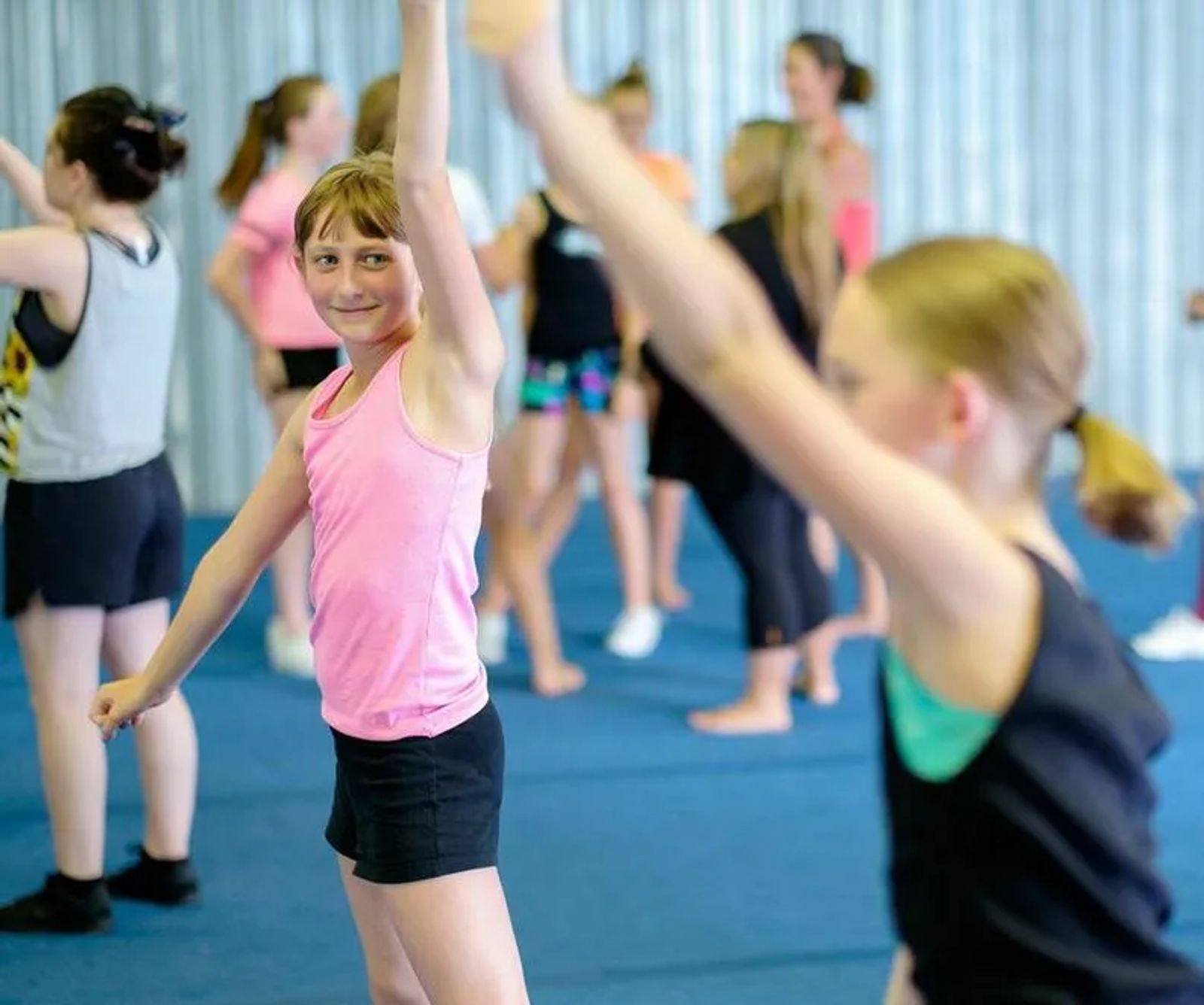 Taking Cheer to the Next Level