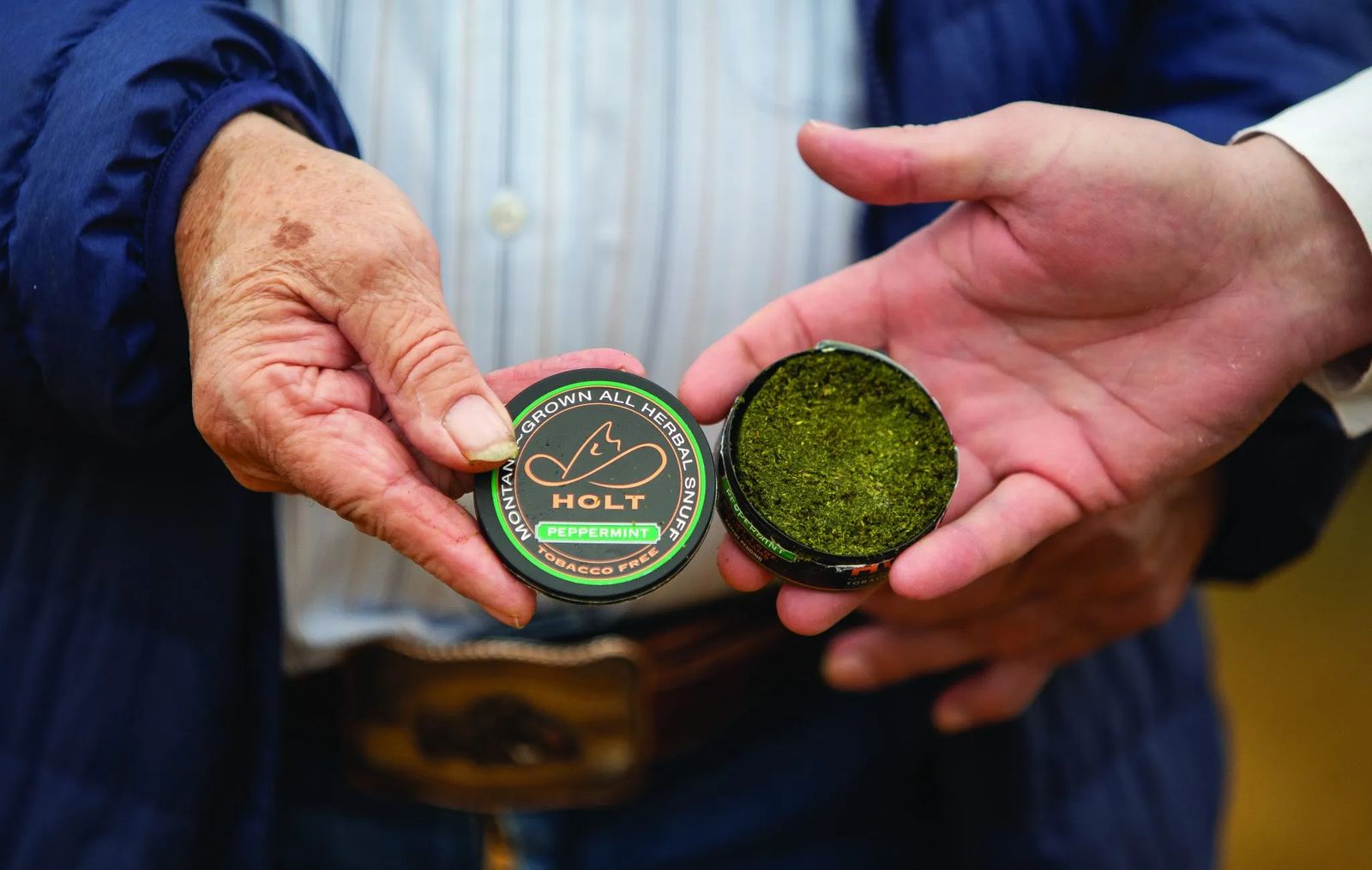 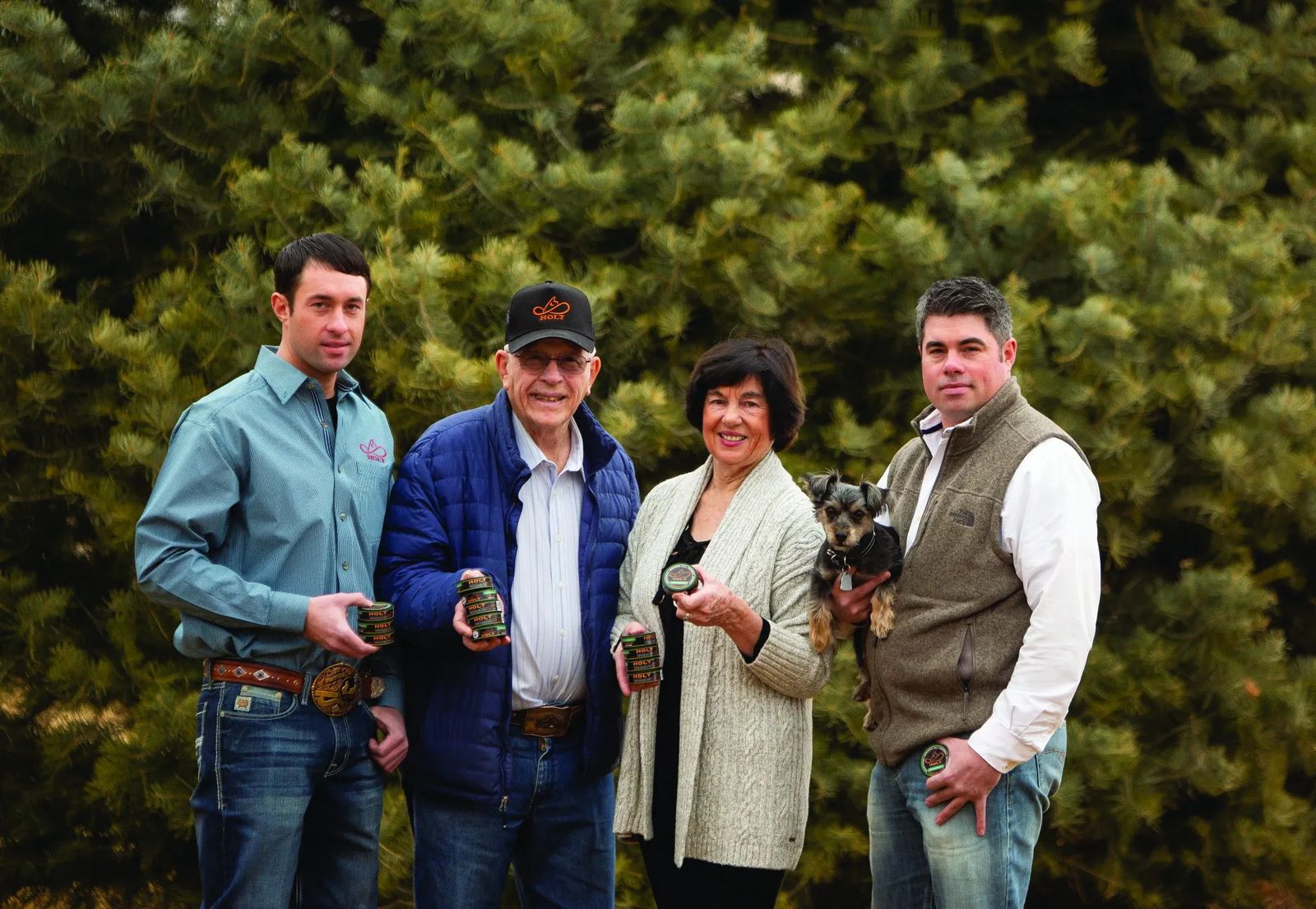 Former tobacco addict Dave Holt’s goals aren’t explicitly financial or even tied to any numbers, stats or figures. He has concocted a healthy alfalfa chew as a tobacco substitute in hopes of reducing users’ all-powerful snuff habits.

Ultimately, he would like to alleviate for others, one person at a time, the physical and mental throes of addiction that he suffered for decades.

Holt Chew is finely cut alfalfa whittled from small leaves, ground, and then packed into a traditional-looking chew can. The alfalfa is harvested from deep soil with a root system that’s at least 60 feet deep. At that depth, the roots connect to a hearty subsoil that hasn’t been leeched of its absolute mineral and vitamin potential. The first cut of alfalfa isn’t used. It’s the second cut of alfalfa that yields the most protein. A third cut can be used if the crop, which is grown without the use of herbicides or pesticides, is fully dried. 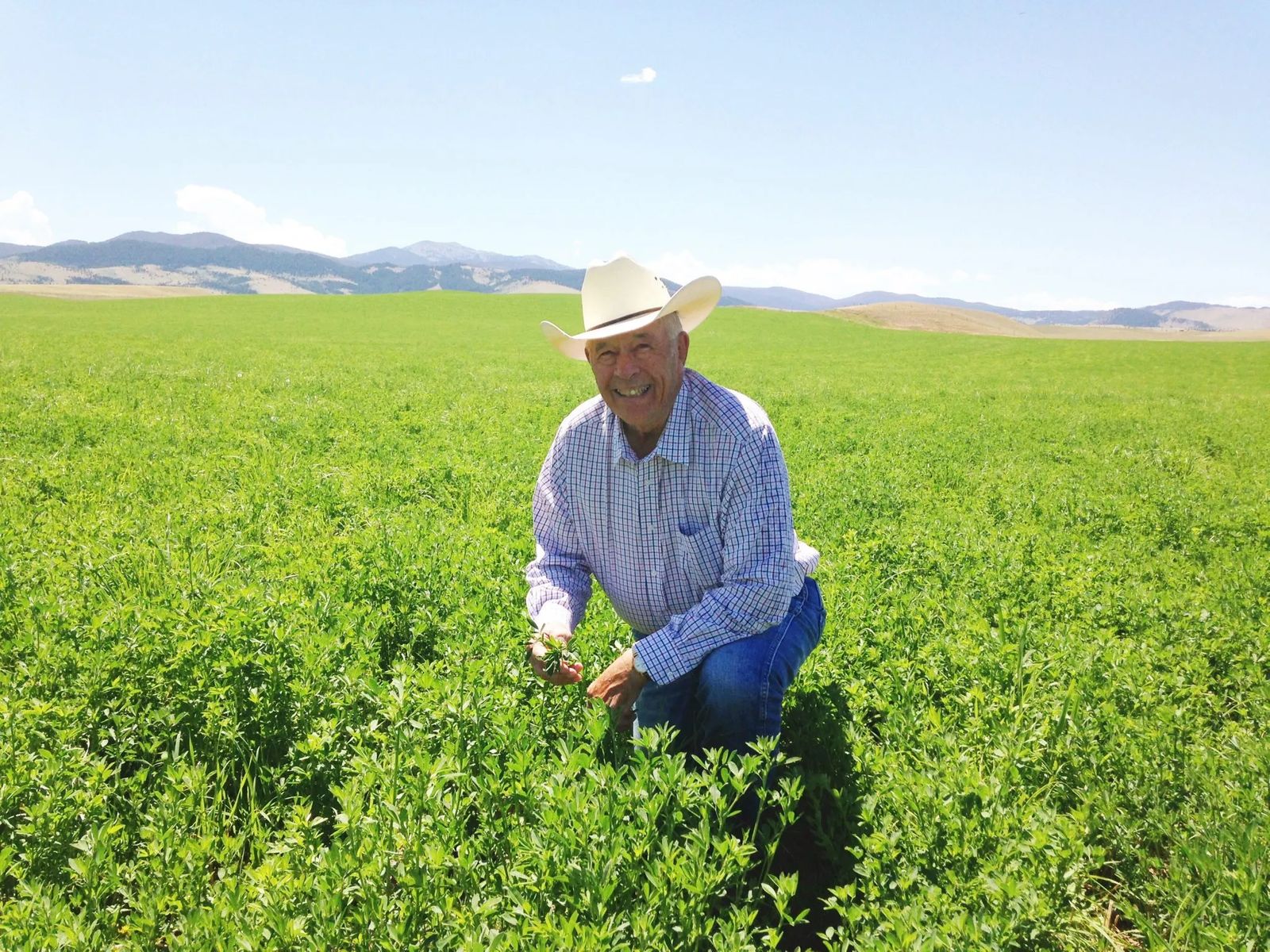 “It’s the only crop where you can buy it by the ton and sell it by the ounce,” Holt says. “There aren’t many things that you can do that with. “

Traditionally, most people have considered alfalfa nothing more than grazing feed, Holt says, but ranchers have known all along that it is a healthy, hearty, adaptable forage crop.

“You can have your big steak and a cup of alfalfa tea,” Holt says. “See, the ranchers, they know how good it is, and what it is. The people we relate to the most are farmers because they know what it is and the benefits of it. They know its protein strengths and it’s not hard to convince them that it’s good. It’s like how your mom told you to eat your peas and carrots. Your alfalfa is nutritious. People are always at the grocery store wondering what to buy to balance it all out. Mother Nature has already done it (with alfalfa).”

Alfalfa is a rich source of vitamins A, C, E and K4 and it is packed with minerals, including calcium, potassium, phosphorous and iron.

“It’s still known mostly as cow food,” Holt says. “The governments just haven’t spent millions researching alfalfa, but if I blow my horn loud enough, someone will take a hold of it.” 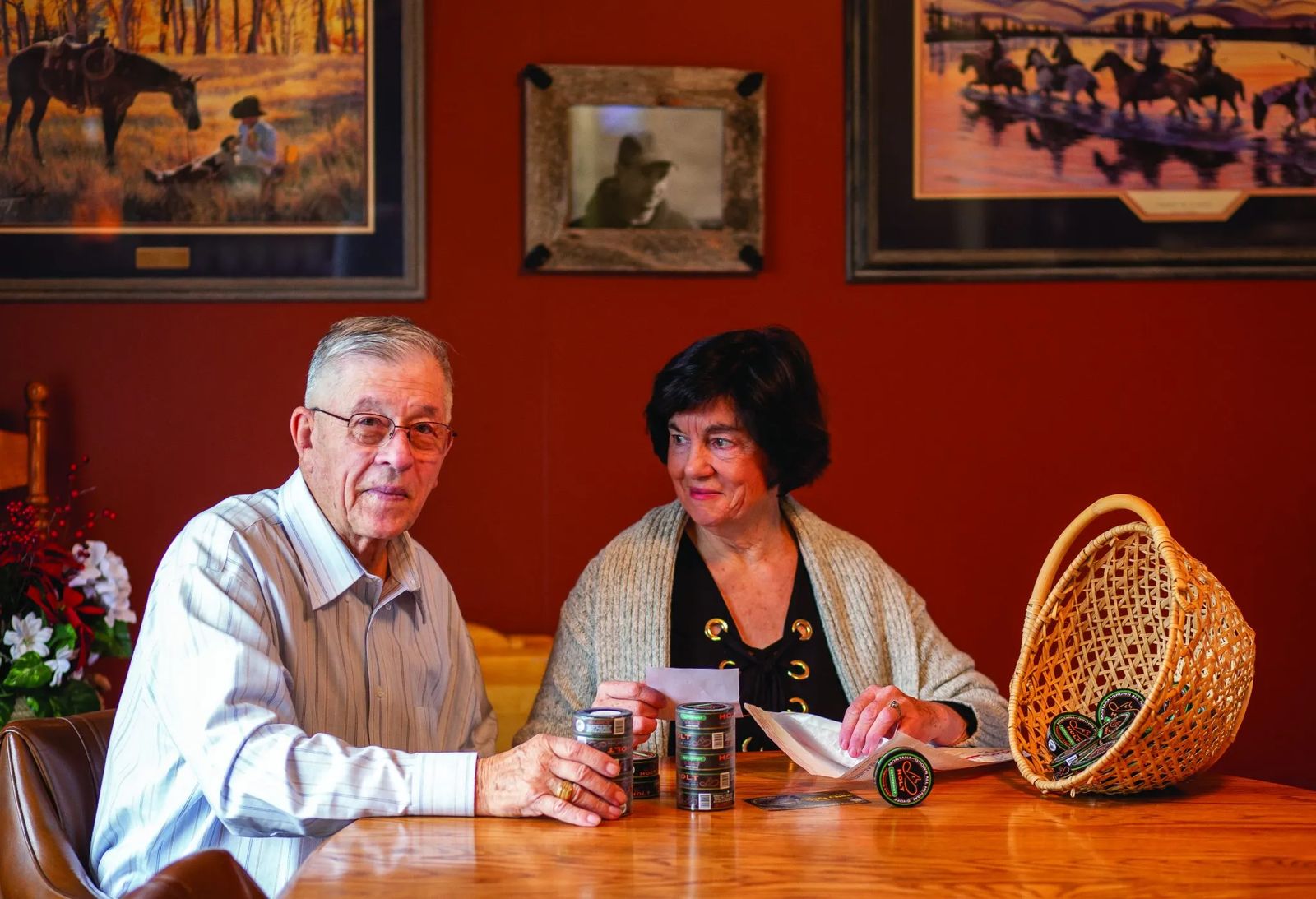 Holt and his wife and business partner, Colleen, have invested ample time, enthusiasm and money into the development of Holt Chew, which they deem a safe, healthy alternative to dipping. Holt Chew is enriched with cayenne pepper, honey and Vitamin C and includes a sprinkling of peppermint harvested in Kalispell.

In Holt’s case, alfalfa helped alleviate his own relentless tobacco dependence. A native of Texas, he started chewing as a teenager in roping school, which wasn’t uncommon because, he recalled, “Everyone’s grandma even chewed.” He says he chewed because he considered it “the manly thing to do.”

It also served the practical purpose of keeping his mouth moist in the summer when he was working outside, he said. What made it even worse for him was that he quickly formed the corrosive habit of never spitting the tobacco out.

Holt, now 75, has paid a hefty price for decades of dipping. Seven stents help keep blood flowing to his heart. He’s faced cancer of the lymph nodes along with a series of strokes. At age 70, he tried to quit the nicotine habit multiple times, employing a variety of methods. At the height of his addiction, Holt, a former agricultural teacher, would get so disgusted with his unhealthy tendency that he’d fling the chew can into the sagebrush. Then, within an hour, he’d be searching for the can he’d just tossed, cussed at and swore off.

“I tried all of the alternative stuff,” Holt says. “My wife and my kids (twin sons Chase and Cotton) were on me for 10 years about it. I tried chewing coffee grinds, oats, wheat, barley, flax seeds, even Styrofoam cups and molasses. Molasses, it was like having a hard rock in your mouth.”

The inspiration of using alfalfa as a tobacco replacement, came to him while he was wandering around in the local health food store and “bored to death.” He dried a batch of alfalfa leaves at home and commenced to experiment.

Even after touting all of the benefits of alfalfa and rattling off the cost and health threats tied to tobacco, Holt still maintains a realistic attitude toward the character of addiction.

“If someone opens a can of Copenhagen even now, I can smell it from 200 miles away,” he says. “You never lose the craving for it. This (alfalfa substitute), it is relaxing, and it has no ill-effects that we are aware of.”

It took three to four years of experimenting, logging records and endless tweaking for the Holts to become comfortable with the idea of bringing their product to market. The couple utilized a food kitchen in Dillon as their laboratory, where they sampled the alfalfa for taste and flavor and attempted to duplicate the fine grind of tobacco as well as an oral sensation that felt smooth against the lip. Their tools were minimal: a food processor to grind the leaves and a specially constructed leaf extractor.

At one point, the Holts were using Peppermint Schnapps in the ingredients, testing their creation on friends, some of whom “would flee like a bunch of birds,” according to Holt. Eventually, they solicited the advice of agricultural professionals connected with a couple of different colleges, which led to their recommendation of adding Vitamin C to enrich the alfalfa’s potency and honey to stabilize its properties.

“It doesn’t have that abrasive feel of tobacco,” Colleen says. “The taste is very important.”

Dave and Colleen married in 1977 and moved to Whitehall around that time. Three years ago, Dave suffered a stress stroke that left him confined to a wheelchair for two months. Mobility to some extremities has returned slowly and he hopes to be back in the horse saddle in the near future. His passion for his product, however, hasn’t diminished. Sons Chase and Cotton lend him great assistance on the agricultural end of the production and they serve, Holt says, “as our biggest advertisers.”

“We’ve always roped and rodeoed a lot as a family growing up,” Colleen says. “As they say, the family that ropes together stays together.”

In addition to its use as a tobacco replacement, the Holts package alfalfa as a tea, and they recommend it as a salad and soup garnishment, or even as a pet supplement. Alfalfa is reliant on the variables of geography, and the Holts’ acreage in the Whitehall area seems to fit the forage crop well.

“In different parts of the state of Montana, the taste of alfalfa is different,” Colleen says. “It can be sweeter or bitter and taste different if it’s harvested in old glacial areas or whatever. It all has a dramatic effect on the taste and what is in it.”

The Holts have been contacted by and sold to professional baseball players and Major League Baseball team staff, including one of the pitching coaches for the New York Yankees. People affiliated with NASCAR have also been drawn to Holt Chew. While selling their product is its own reward, enjoying it is an even greater prize for the Holts.