Could Breast Implants Be Making You Sick?

Trisha Kalfell is on a quiet crusade to raise awareness

Behind a fringe of jet-black hair, Trisha Kalfell’s eyes sparkle with life and vitality. She’s a devoted wife and a mother of three boys, a creative hairstylist and a small-business owner, and her passion for life creates an all-over glow that no one could miss — even underneath her sprawling collection of tattoos. Meeting her today, you would never know that less than a year ago she was fighting for her health and fighting for her sanity.

Trisha was experiencing a host of serious symptoms including joint pain and inflammation, fatigue, skin sensitivity, weight gain, hair loss, severe gastrointestinal issues, vertigo, dry eyes, insomnia, numbness in her hands and feet, ringing in her ears, brain fog and anxiety. Her symptoms pointed to an autoimmune disorder or perhaps a thyroid issue, but all the standard tests came up negative. While every specialist she saw was willing to treat her symptoms, not one could account for their cause. Even a complete workup at a naturopathic clinic produced a “clean bill of health.”

In an effort to improve her health on her own, Trisha adopted a clean lifestyle and plant-based diet and began taking supplements. She hit the gym regularly and cut out every unhealthy thing she could think of. She was doing everything she could to get well, but the mysterious symptoms continued to worsen.

When Trisha had all but given up, she came across a Breast Implant Illness support group on Facebook. There, women were experiencing all the same symptoms and being met with the same “nothing’s wrong with you,” response from their doctors. Suddenly, everything clicked.

Trisha is one of the millions of women with breast implants, and one of a growing number of women who experienced adverse reactions to them, known informally as Breast Implant Illness.

Trisha had her first set of implants put in in 2014, and shortly after that, her hormones started to fall out of balance. She had her second set of implants — a size larger — put in two years later, and that’s when the rest of her symptoms started to show up. At first, the changes in her health weren’t drastic, but within three years she could hardly move without pain, couldn’t eat without severe diarrhea and could barely get through a day without being overcome with fatigue and anxiety.

“No one said it could be my implants,” Trisha says.

Breast Implant Illness is not recognized by the medical community in the United States, and as such, there are no diagnostic criteria for it. What Trisha later discovered was that her body mounted an immune response against the implants, which had leached toxins into her breast tissue.

Trisha knew right away she wanted to have her implants removed but realized in her research that there was more to an explant surgery than reversing the simple implant surgery. Only a handful of plastic surgeons in the United States believe in Breast Implant Illness and understand the complexities of the explant surgery. One is Dr. Shaher Khan in Detroit, Michigan. 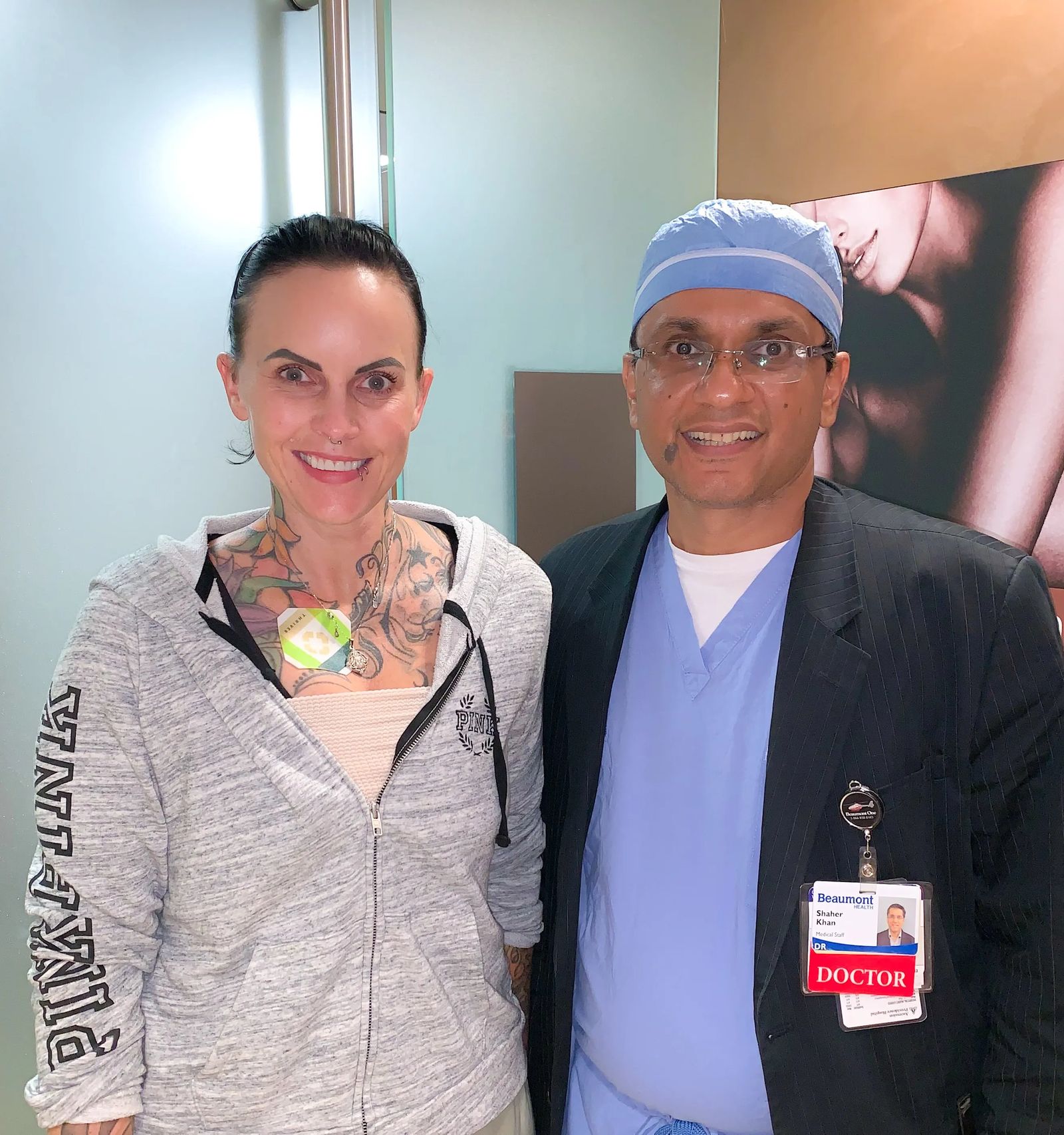 Khan is a board-certified plastic surgeon who only does breast explant surgeries, and he is a wholehearted believer in Breast Implant Illness. Khan believes that all implants can cause Breast Implant Illness because the silicone they’re made from is toxic. Silicone at body temperature breaks down into 40 different toxins and heavy metals, including silica.

“Implants are a foreign body and when you put them into the body, they create an immune response and a shell or capsule forms around them as the body’s defense,” he says. “The body tries to wall them off.”

Khan is careful to remove not only the breast implant but the surrounding capsule of contaminated scar tissue as well. It’s a delicate procedure that requires experience. If left behind, the capsule, which contains the toxins, will continue to cause the body’s immune system to react. Khan has had numerous post-op analysis done of breast tissue where it surrounded the implants and the tissue has all been contaminated with silica.

“Breast Implant Illness is very real,” he says. “This is very convincing data when you look at just my patients alone.”

Khan successfully performed an explant surgery on Trisha in September, and, as he does for all his patients, removed the contaminated capsules around the implants as well.

“The next day, I woke up and I was completely better,” Trisha says. “My joints didn’t hurt, and I was able to eat anything I wanted without any problems. The ringing in my ears stopped, and I finally had energy.”

Six months later, all the symptoms she had experienced for years are gone and Trisha feels better than she’s felt in years. She believes her plant-based, clean-eating routine and high-quality supplements aided in a speedy recovery.

Trisha’s implants were a silicone gel, or “gummy bear” implant, the latest in implant technology. According to Khan, Breast Implant Illness can happen with any kind of implant, because they all contain silicone — even the saline implants come in a silicone shell.

“The silicone is the culprit,” Khan says.

After the explant surgery, Trisha returned home and dug through her medical records and found the original brochure from when she got her first set of breast implants. She discovered, in the fine print, the list of symptoms, almost exactly as she experienced, as potential side effects of breast implants.

“They didn’t tell me anything about any side effects,” Trisha says. “I wish I would have put as much research into getting them as I did after I got them.”

Now, she’s on a quiet crusade to share her story in hopes that it will help other women who might be suffering from Breast Implant Illness.

“I think a lot of women with implants have some symptoms, but they chalk it up to something else and they’re willing to live with those symptoms because they don’t want to look at the implants as a possible cause,” she says. “I tell my story, and people are connecting the dots for themselves.”