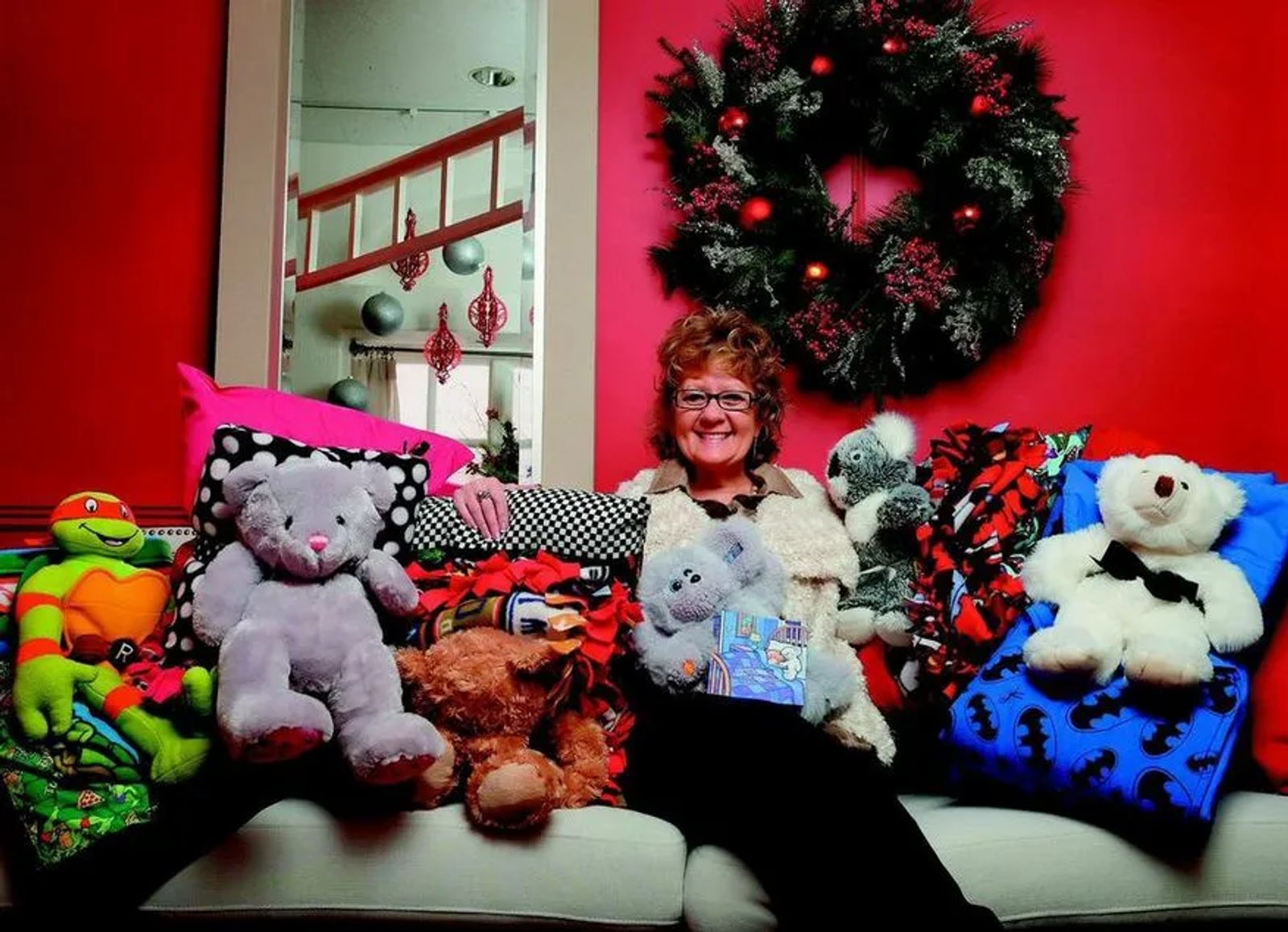 Sandy McCaffree warms the hearts & bodies of kids in need


When Sandy McCaffree looks around her basement, a.k.a. "The Bear Den", parts of it are hardly recognizable. Darling and fluffy plush bears are piled high in every shape and color as are handmade and oh-so-soft fleece blankets. It"s an explosion of color that Sandy can"t wait to dole out. Her eyes sparkle just talking about that special delivery. Before long, hundreds of the neediest children in our area will be holding these items at night to feel a little bit safer and a whole lot warmer.

"Sometimes, that"s the only thing that these kids will get that year for Christmas," Sandy shares with emotion in her voice. 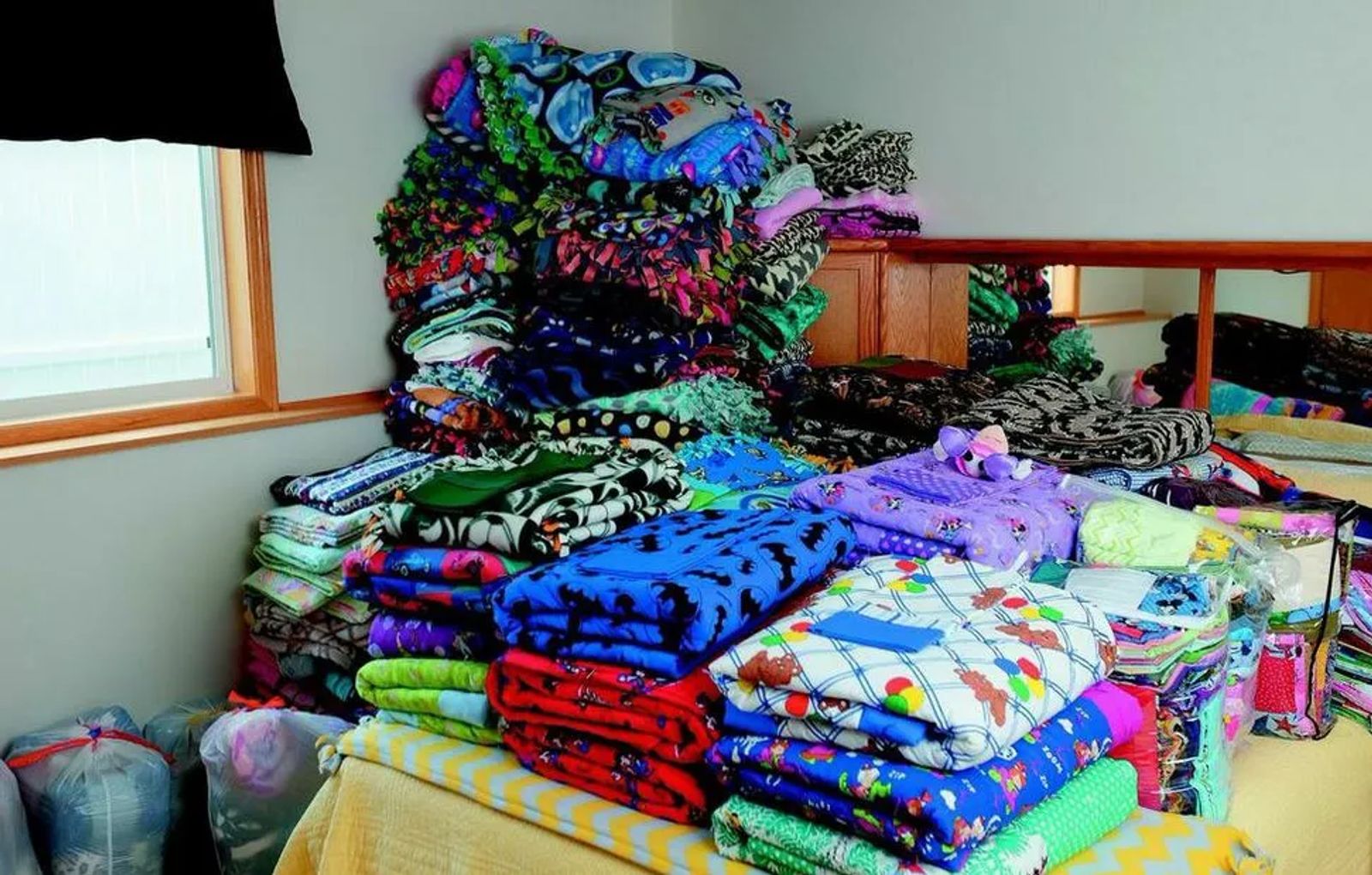 Her non-profit, Blankets & Bears, started in a rather innocent way. In 2005, Sandy"s employer, Dr. James Patterson, was in the middle of moving his dental practice into a new building. Sandy says, "We thought for sure he could use something for his new office." When she and her co-workers approached him, he said there were so many more worthy uses of their money. Sandy says, "He told me, "You do some homework and you find some children that will benefit from whatever money you would have spent on me.""

That prompt was all it took. Sandy was stunned by what she discovered.

On her fact-finding mission, she ended up chatting with Rick Hamblin, the Director of Therapeutic Family Living at the Yellowstone Boys and Girls Ranch. "He said, "There are going to be seven foster kids that will go into new foster homes on Christmas Eve. They don"t have anything to take with them."" As Sandy looked at the dental office, "There were seven kids and there were seven people in our office." Adopting these children, Sandy says, was a no brainer. But because of confidentiality concerns, she says "We didn"t know how many were boys or how many were girls. We didn"t know if they were three or thirteen years old. They couldn"t give us that information." Her answer to the need was a fleece blanket, a pillow with a bright and perky pillowcase and a cuddly stuffed animal. Sandy says, "If you are going to spend the night in a new home, what do you take with you?"

That first year, Sandy wasn"t able to personally deliver the bundles, but she followed up with Rick to see how well they were received. "He said one little girl cried and said, "I never had my own pillow!" Another little boy told him, "I don"t have to sleep under my coat now!"" Sandy admits, "That was something that just hit me in the heart. It made me feel humble." 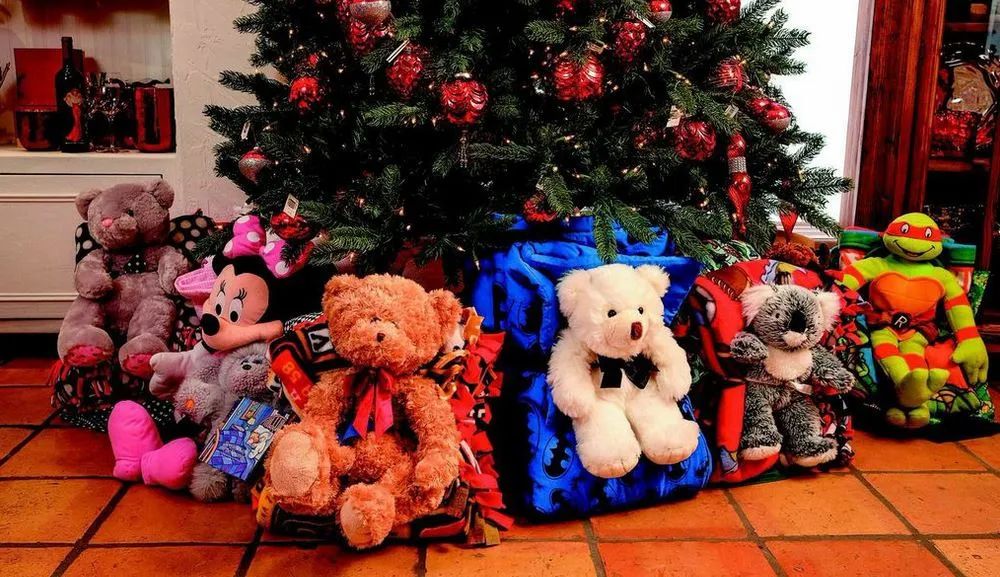 "Something so small made a huge impact," Sandy says. "I just felt it." And Sandy saw it with her own eyes. The third year, she was able to orchestrate the heart touching and special delivery and be there to witness the gifts being given. Sandy says, "I get very emotional. I handed a little boy a bundle. He clung to my leg and he just looked at me and said, "You can be my mama." I just lost it."

Sandy knew right then and there that this was her calling.

"I"m a breast cancer survivor and I think that changed me. It showed me that there is a reason why I am still here. I have a heart that is big enough to go farther." With her kids grown, Sandy had the time to give. She says, "You get to a point in your life, your kids are gone and you have an empty nest. I knew that there was something out there that could fill the void and this is it. It"s huge with me."

Through it all, Sandy"s husband Ed, also known as the Chief Bundle and Bear Den Organizer, has been by her side.

"She points her finger and I jump!" Ed says with a laugh. As he"s made the rounds with Sandy, he"s seen firsthand just how these cuddly bundles impact the kids. One year at the Boys and Girls Club she says, "One little boy took his bundle apart, unrolled his blanket right there and snuggled under the covers as the kids told stories around the pretend campfire. Seeing that kind of stuff, it"s very rewarding." 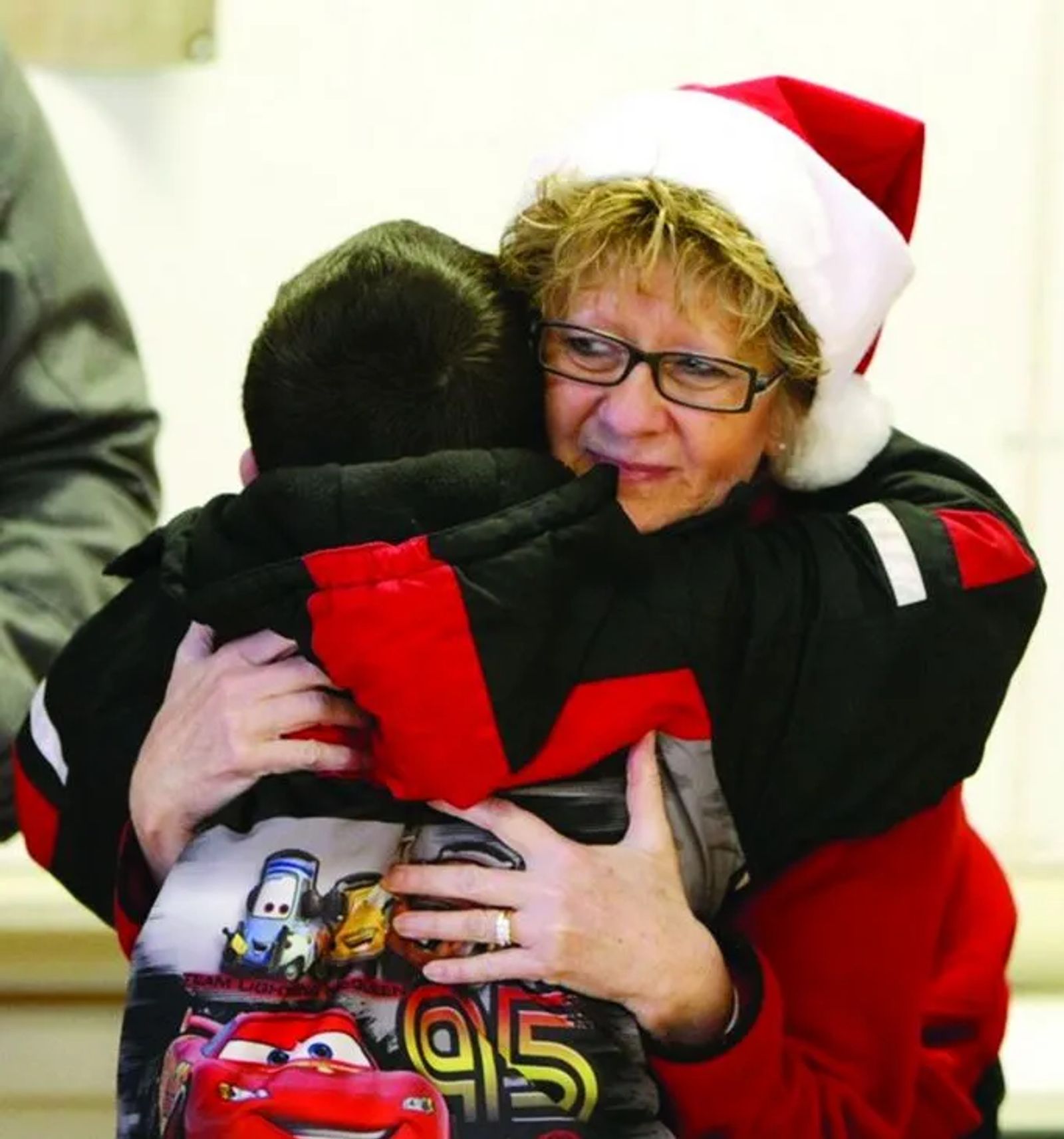 He says each and every year, he braces himself for the number of kids Sandy sets her sights on serving. This year, that number is more than 500 and donations are already starting to come in. He says, "We are running out of space! We got a storage shed this year. The unit is fairly big and it"s already full!"

Truth be told, helping to serve a large number of children wasn"t always easy. In fact, Sandy struggled the first five years trying to secure enough donations just to help roughly 100 kids. What changed? Sandy says, "I really learned how to ask for help!" She turned to her son, Sean Evans, one of the members of the Menace Motorcycle Club to see if their ten-plus riders would be willing to help spark fundraising efforts. 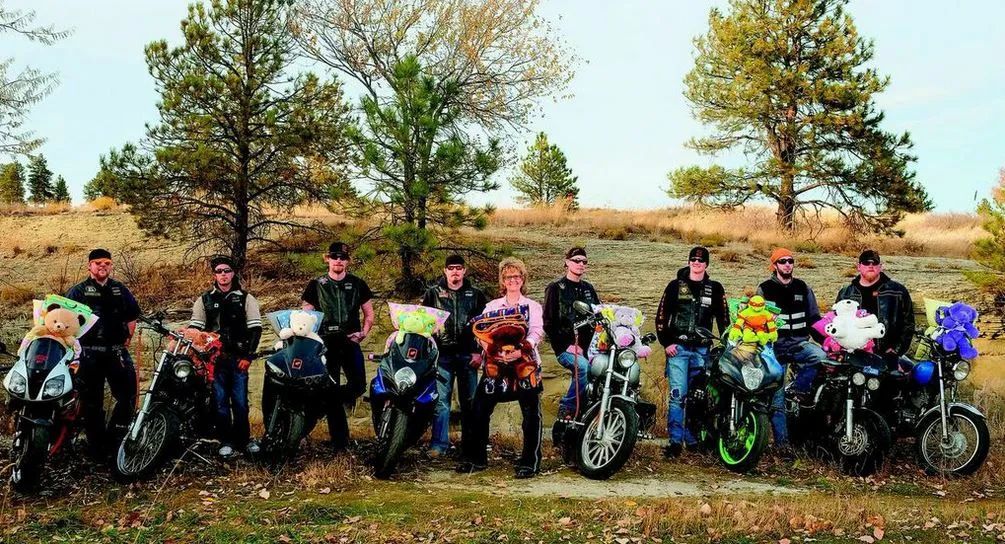 At one of the MMC"s meetings, Sandy passed out a bundle and asked each of the men to hold onto it for a minute. As she pointed to some of the members, she said, “I know you have a nephew and I know you have a little girl. I want you to hold one of these and tell me what it feels like. If you hold onto this and you can tell me that a child should go without something like this at Christmas, my mission here is done. I don"t need you. These big guys looked at me and said, "What can we do for you?""

The bikers hosted car and bike washes, a Bowling for Bears event, poker runs and even a Blankets and Bears ball that has drawn in hundreds of bikers from all over the region. Sean says, "With how big this motorcycle community is, this last Blanket and Bears Ball was by far our most successful event ever as a club. We had ten motorcycle clubs from all around town, from parts of Montana, Wyoming and North Dakota that came up just for this event. It was absolutely fantastic that we were able to write a check to Blankets and Bears for $5,200 this year." Sandy adds, "We had a couple of Hells Angels that came that had hearts bigger than their own souls. They dropped a bucket load of money and said, "We know that this is a good cause."" All in all, last year the club raised just shy of $15,000 for Blankets and Bears.

Because of the club"s love for the cause, they created a custom Blankets and Bears patch that many of the members have sewn to their motorcycle vests. It"s a reminder of that one day in December when they can take their fundraising efforts and literally look a child in need in the eye and say "Merry Christmas."

"It is just a look of awe from these kids when they see these big burly bikers give them something incredible, something brand new, something to call their own, and something that they can cuddle up with to make them feel safe and secure," Sean says."It"s one of those things that you just have to be there to experience." Aside from the huge caravan that the motorcycle club creates on delivery day, seeing the men interact with these kids is something Sandy will always remember. "They say a man never stands as tall as when he kneels to help a child. I"ve seen some of these big burly men get down on their knees to get to the level of a child."

In addition to the Yellowstone Boys and Girls Ranch, Head Start and the Boys and Girls Club, this year Sandy agreed to help the Shriners serve more than 100 local children who have been served by the Shriner"s Hospital. Sandy says if the kids are well enough, they"ll be invited to a Christmas party at The Shrine and there, waiting for them, will be a Blankets and Bears Bundle.

"Menace said to me, "Let"s say yes to the Shriners and add on another one hundred this year."" Even though the jump in numbers makes Sandy a little nervous, she says, "I have the people backing me and I know that they will help me make it happen. You pray about it and you know the prayers will be answered." Every year it"s been a generous community that has stepped up and helped her to make it happen.

It"s generosity like this that Sandy uses as fuel for her larger than life dream of taking this program nationwide one day. She"d love for chapters to open in each state under the Blankets and Bears name. Sandy says, "I"m just letting it take its course! Maybe getting the word out to just the right person will give it the fire it needs to grow."

To date, Sandy"s given literally thousands of these bundles away to kids in need. That"s why it is so easy to see why 364 days out of the year, Sandy lives for that one day she can play Santa and deliver hope and warmth to children who need a lot of hope and warmth. "That last giveaway, you think, I have a whole year before I get to do this again! It"s truly bittersweet."

This year, that day is December 18th. Sandy says she knows that a blanket and a stuffed bear is just a bandage to a child who has been forced to endure horrific things in life, but hopefully these children feel the love that is sent with each and every "cuddle bundle."

"This is a passion. I think anyone who has a passion like this, they are driven by it. I"ve been given a gift of giving and to give that back? That"s who I am," she says. "I will be 60 in December and honestly, I have never felt better. As long as I am able and there are children who need us, I will be there for them."

One of the most generous private donations Blankets & Bears received was from Pat Carlson, founder of the stuffed animal "Nestor Nevernod", created for Pat"s niece who had troubles falling asleep. The story"s poem reads in part, "When you"re scared and alone in the middle of the night, there"s a special friend who can help take away the fright." Pat donated 500 of these bears to give some children in our area something cuddly, something that can help take away the fright.[/caption] 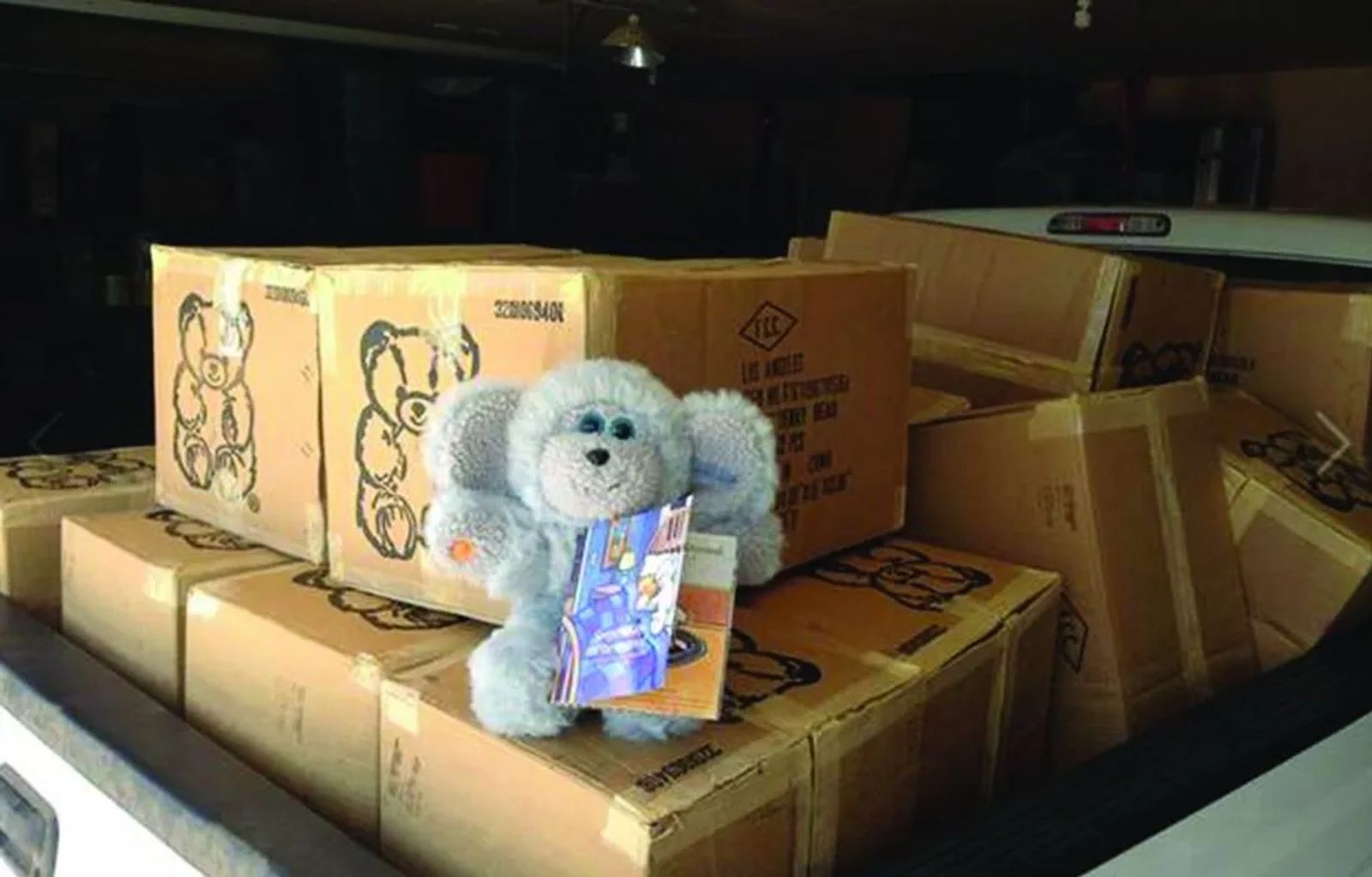 If you"d like to lend a hand to Blanket and Bears, you can visit this warm and fuzzy philanthropy on the web at www.blanketsandbears4kids.com to find out how.