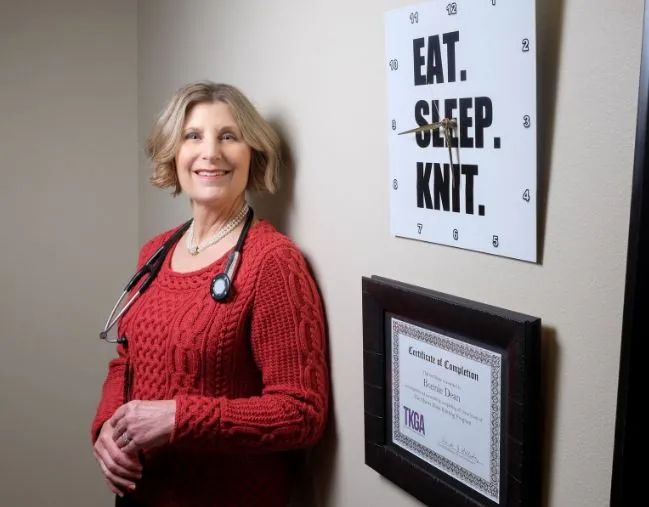 Bonnie Dean plans to trade her stethoscope for knitting needles

Juggling two demanding careers, Bonnie Dean is by necessity an early riser.  Twelve days on, nine days off, she’s a physiatrist at New Hope Rehabilitation Center in Billings, managing intense therapy programs to restore patients with spinal cord and brain injuries, amputations, strokes, and other traumas and disorders to their best possible quality of life.   Other days, she’s laser-focused on a wildly different pursuit, reinventing herself as a rising star in knitwear design.

The new Bonnie is going gangbusters.  In 2015, she became just one of 300 knitters in the world — and the only Montanan — certified as a master knitter by the Knitting Guild of America (TKGA).  “Those who become master knitters go on to design knitwear, write books, publish patterns, and teach other knitters,” says Sharon Levering, co-chair of the grueling three-level TKGA program and editor of TKGA’s Cast-On magazine.  “They become household names in knitting circles around the globe.” 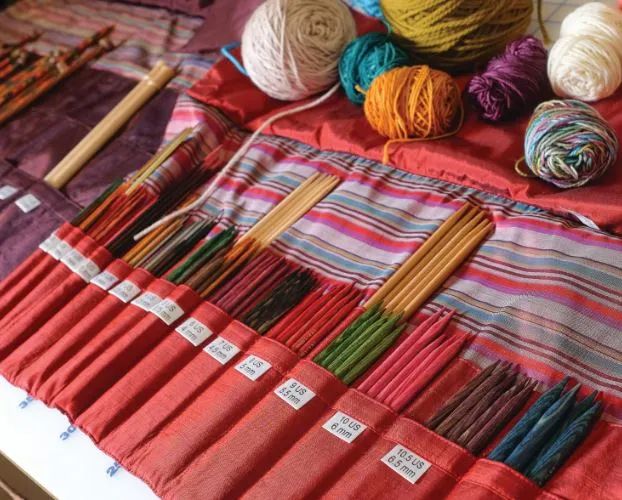 Make It With Wool

A self-described “master of delayed gratification,” Bonnie applies to her knitting a fearlessness that’s served her throughout life.   “I set goals and find creative ways to meet them,” she says, “even if I have no clue of the complexity of the task at hand.”

By age 15 in her hometown of Dayton, Ohio, Bonnie was a competitive sewer, winning local and regional Make It With Wool prizes for tailored garments. She was largely self-taught, with a design sense inspired by her great aunt Dorothy, a London fashion designer.  Plunging into adulthood, Bonnie earned her pre-med degree in 1978 and received her MD in 1982.   After stints at hospitals in Cincinnati and Fargo, she landed at New Hope in Billings in 2006.

Bonnie loves her medical career.   But as she approached age 60, she began thinking about retirement.   “I knew I wanted to do something really creative again,” she says.  “Going back to sewing and becoming a runway fashion designer at my age seemed impractical.  So I decided to become a TKGA master knitter, to get expert credentials and see where that would take me.”

Never mind TKGA’s admonition that its Master Hand Knitting Program “is not for new knitters.”   At the time, Bonnie barely knew how to knit. 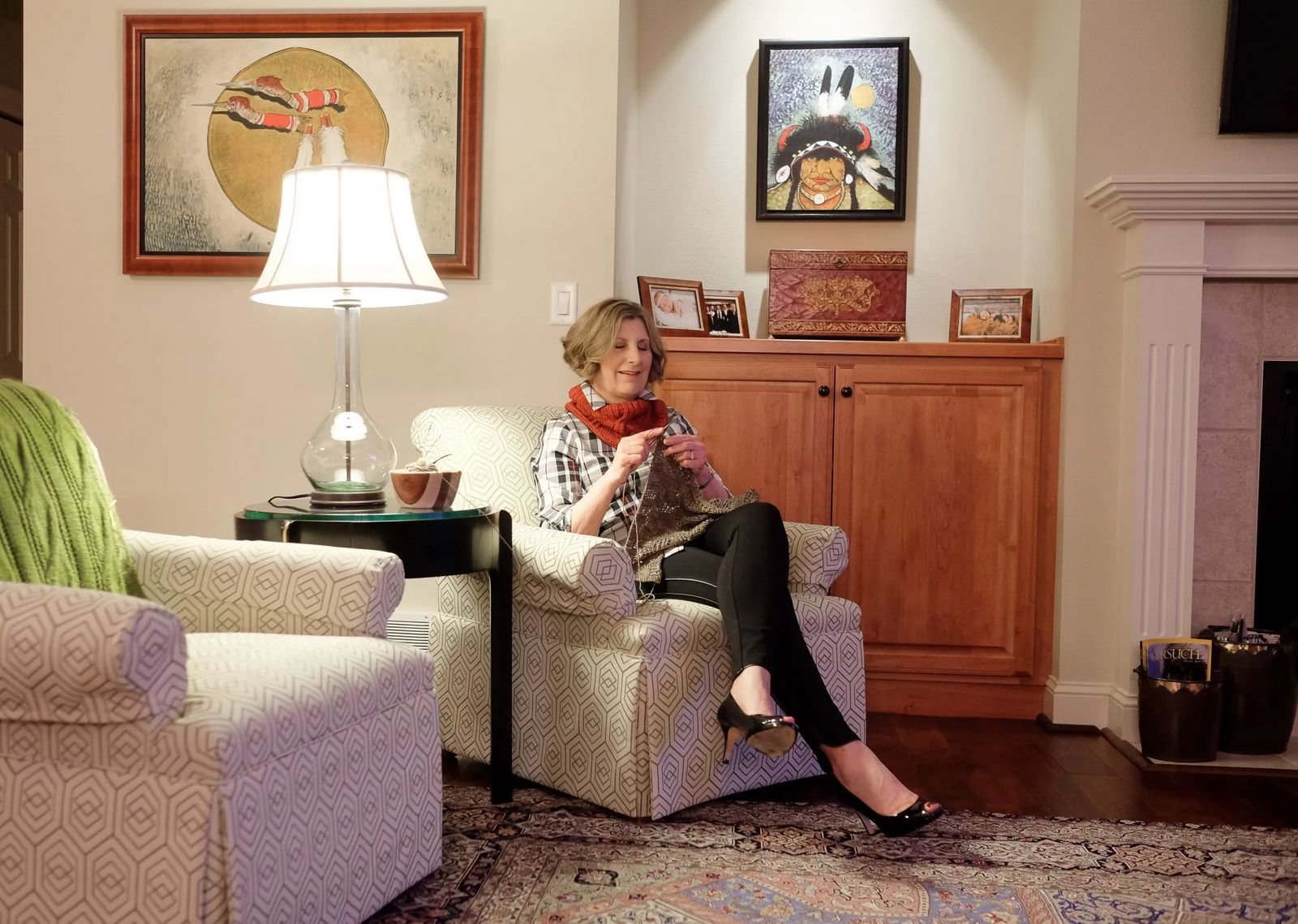 For three years, 2013 through 2015, Bonnie worked the three levels of the TKGA program, producing three 4-inch-thick notebooks of reports, swatches, and projects.  She wrote and rewrote articles on knitting techniques and traditions, the history of knitting, and the care of knitwear.  She knit and reknit, producing knitwear and patterns she says “had to be perfect.”

The learning curve was steep.  “Because I was a novice knitter, I probably had to do two-thirds of my first notebook over,” Bonnie says.  That’s when I realized I didn’t know anything.  It took me four months to regain enough confidence for a do-over.” 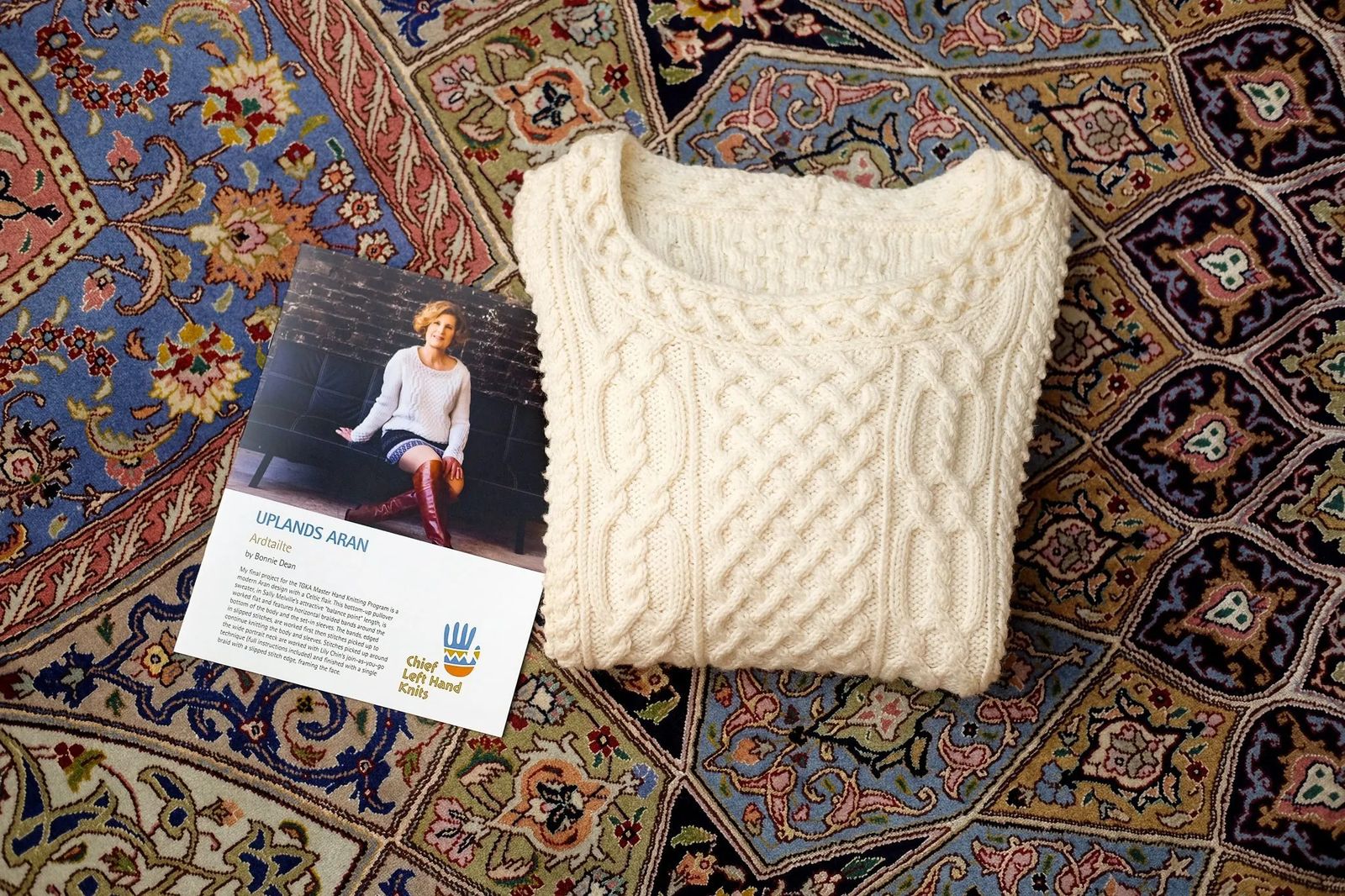 “Quite a few people start out in the master knitter program but don’t finish,” says TKGA’s Levering.   Not Bonnie.   Today, she’s listed on the TKGA website with master knitters from Australia, Belgium, Canada, Denmark, Ecuador, England, Ireland, Japan, the Netherlands, Sweden, Thailand, and the United States.

“Other than giving birth to my two sons and getting my medical degree,” Bonnie says, “I consider this my highest achievement.  The angst and effort in completing this program rank right up there with other demanding and challenging accomplishments in my life as a doctor.”

What TGKA didn’t teach Bonnie was how to get her new patterns published and sold.  But Bonnie had that angle covered.  Just barely into the TKGA program, she walked into the Billings knitting store Wild Purls (now known as Off the Needles) and told employee Linda Heins her intention to publish six patterns in six weeks.  Linda said, “Okay, who’s your graphic designer, your illustrator, your photographer?  Who’s going to test knit for you?  Who’s your technical editor?”  Bonnie didn’t know what Linda was talking about.

Aided by this hometown knit shop, Bonnie hired Heins Creative of Billings to design a template for her patterns to be marketed under the company name Chief Left Hand Knits.   She taught herself pattern charting software and design programs for self-publishing. She found test knitters in Billings and California.  She hired a nationally known knitting educator and marketing consultant who helped transform an “all over the place” design sense into a coherent theme of textures, modern cables, and embellishments.  TKGA’s Levering agreed to be her pattern editor.   “This is huge for me,” says Bonnie of her help from Sharon. 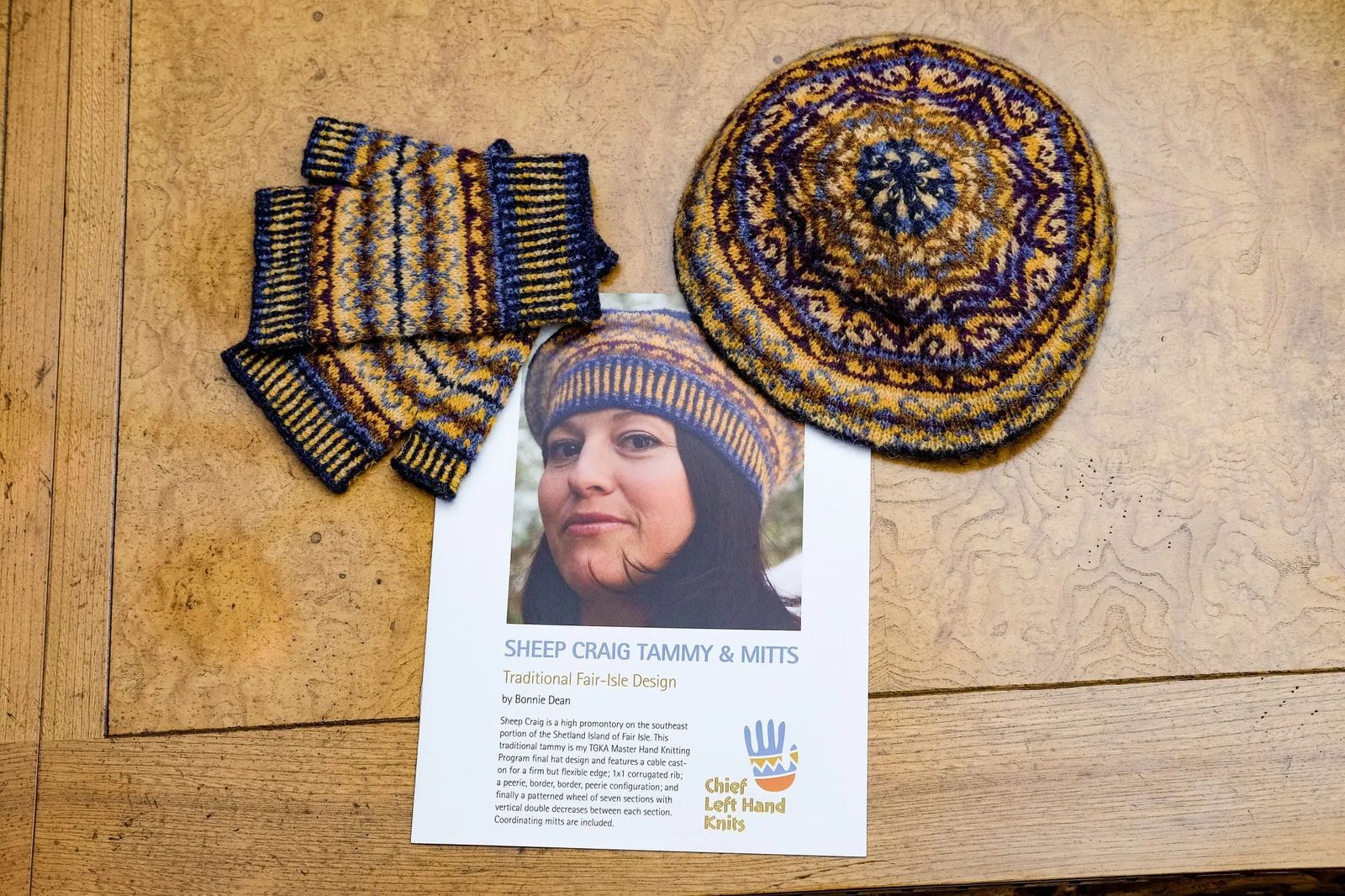 Master On A Mission

Today, Bonnie is indeed a knitwear designer making a name.  She’s published 28 patterns, sold to knitters in eight countries, with eight more patterns on the way.  In January of 2016, the exclusive pattern store Patternfish named Bonnie “Designer of the Month,” a rare honor among new designers.  With the momentum building, Bonnie plans to publish a new pattern every three weeks, and the groundwork is in place to do so.  Not being one to forget from whence she came, Bonnie still finds time to teach group and individual knitting lessons at Off the Needles.  Her ten-year goal is to add hand-dyeing of high-quality yarns to her skills list, marketing the yarns in kits with her original designs.

With knitting enjoying a resurgence, especially among young people, Bonnie’s timing is impeccable.   “We work with fiber to become calm, create, and have a tactile experience like no other,” Bonnie says.   “People seek out the organic and handmade to counteract the increasing depersonalization and mechanization we face.” 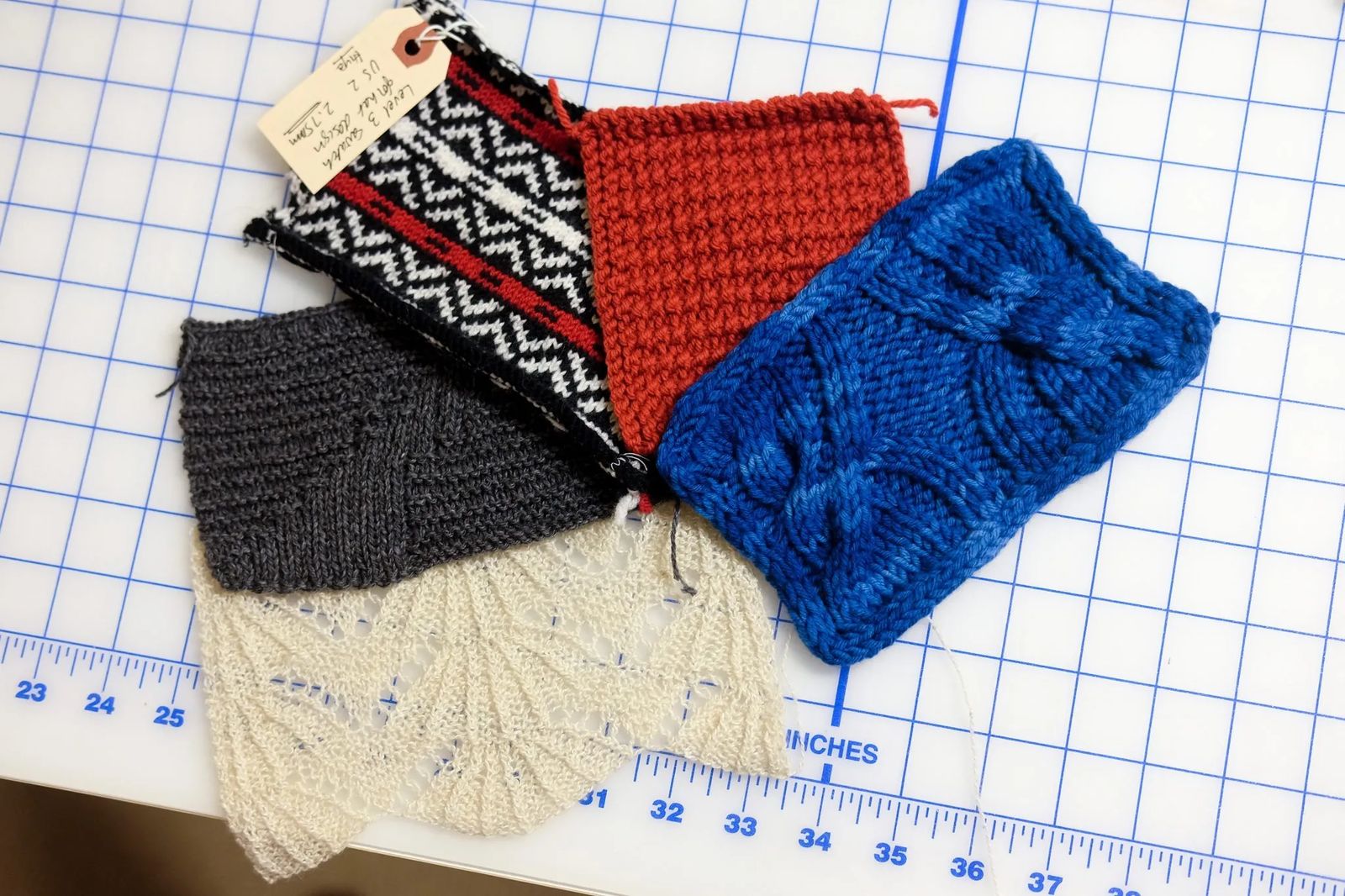 In a few years, Bonnie will put down her stethoscope for the last time and pick up her knitting needles for good. The secret to her success — which is all but certain to continue — will be her characteristic fearlessness and thirst for knowledge.  That, and a willingness to put in the time and give of her time, wherever she can find it.

I think it’s fair to say, a doctor never stops learning.  A master knitter doesn’t either.

“I try to learn something new every day,” Bonnie says.

TO CHECK OUT BONNIE’S DESIGNS: Visit chieflefthandknits.com. Print versions of Bonnie’s patterns are sold at Off the Needles in Billings (formerly Wild Purls), Strings Attached in Dayton, Ohio, and Creations Yarn Shop in Ennis, Montana.  Kits featuring her patterns are sold by Great Falls’ The Farmers Daughter Fibers and California’s Phydeaux Yarns.