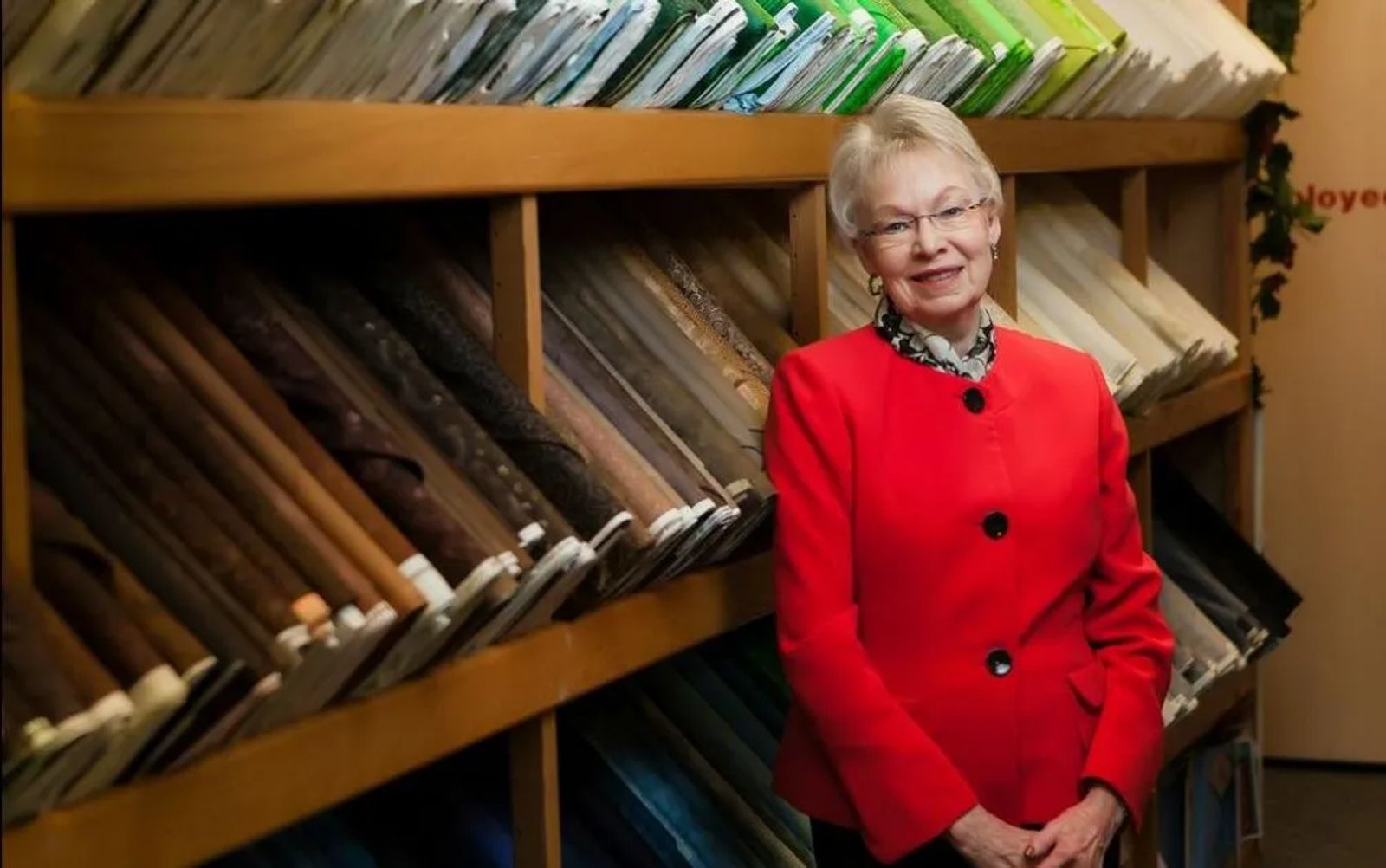 Doris Holzer “jumped” into business with her husband three decades ago and hasn’t had much time to look back. Her ability to “roll with the punches” and the willingness to take risks crafted a business that has undergone more change than our weather patterns. As owner of Bernina Sewing and Fabric Center, Doris has seen styles and trends come and go quicker than a Montana wind storm.

She’s faced huge challenges in the business world, but this enterprising woman has stayed the course.

“We were naïve,” says Doris, talking about when she and Frank bought the shop in 1983. Even though Frank worked for an insurance business while Doris sewed for their four children and herself, neither of them brought any previous retail experience to the table. “We saw an ad in the paper that the store was for sale and suddenly we were in it!”

It was destined to be. Doris loved to sew and Frank enjoyed spending his spare time repairing and servicing sewing machines. Plus, Doris confides, “I was a mom of four and the kids were growing up. I was ready to do something for me.”

They invested in the small store when fabric was rather limited and there were just a “handful” of Bernina sewing machines.  They weren’t yet computerized either. Today, there are 15 or 16 models offering a plethora of software. Sewers can now design and create elaborate embroidered handiwork and sew and quilt like never before.

"We had taken on the Passap knitting machine then,” remembers Doris, “and there was no peace after that. At one point, we were the highest dealer per capita in the western half of the United States.” The business ran smoothly with training trips to Switzerland and full schedules. The need for more space became their biggest concern.

“The yarn for the knitting machine took up a lot of room,” stresses Doris. “So we moved out here on Rehberg about 15 years ago before it was built up. We signed a five-year lease.”

This was about the time machine embroidery became the trend so Doris sold the Passap and put her sole focus on sewing machines. Sergers gained a huge market, too, and it’s also when quilting started its incredible rebirth. The Holzer sewing enterprise mushroomed and the couple continued working around the clock.

With the business evolving and growing day by day, the sewing center wouldn't hit its twentieth anniversary without enduring a huge loss. In 2002, Doris lost her husband and business partner to kidney cancer.  “It was a blow to me and to the business to lose Frank. I was totally unprepared.” Doris would have to learn the hard way how to survive in business.

She would have to keep her finger on the pulse of the latest trends and stay up to speed on the newest technology.  She will be the first to tell you that you have to learn how to be diverse in order to keep a business successful.

“This is three businesses wrapped in one,” reveals Doris as she looks around her store. For starters, it takes knowledge and time to demonstrate all of the different sewing machines models. There's the colossal fabric line to order and maintain. And, there must be an excellent service department for customers. These three profit centers don’t include the varied classes that Holzer offers, teaching everything from sewing basics to quilting and embroidery techniques.

“The work keeps you focused and engaged,” shares Doris. “You have to roll with the punches. You meet challenges you never dreamed of but you have to take risks in life. I feel like I’ve lived on the edge a lot.” 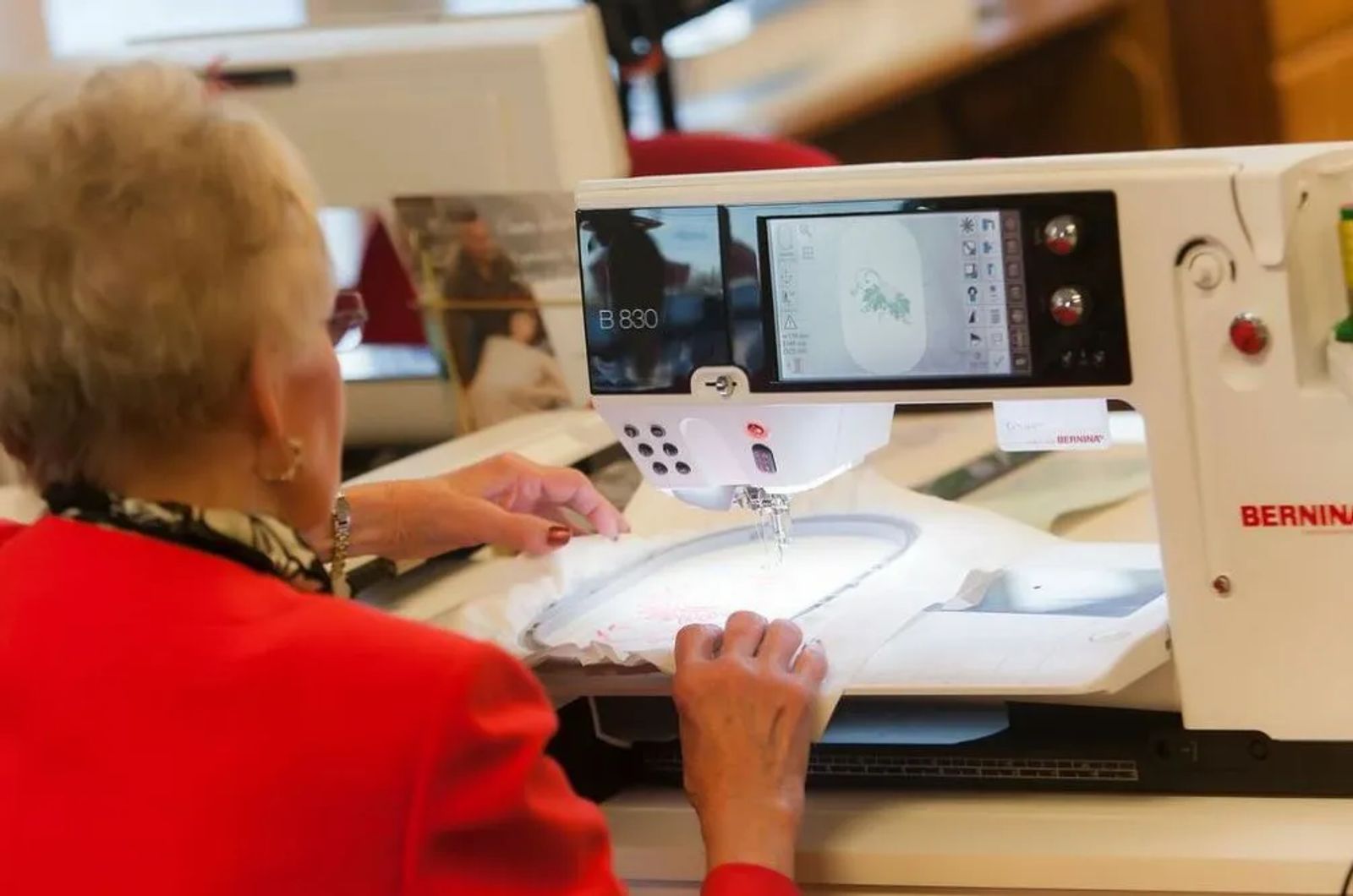 For a woman who has sewn for over half a century, her “machine time” is now spent demonstrating how to operate something that seems to do everything but the dishes. She’s always willing to learn something new at the seminars she attends to keep up with an evolving industry. “You must be willing to work hard and change with the times,” she says.

Monday through Saturday from eight o’clock in the morning until well after six in the evening, this 70-something grandmother of seven wears many hats. She runs her business from the trenches where she answers phones, cuts fabric, sells machines, and sets up classes among other things.

“She’s pretty brave,” says Connie Eaton, one of the 15 people Doris employs, including the teaching staff. “I admire that she is willing to try new things and to take business risks.”

Close to a decade ago Connie, who learned how to sew in Home Economics class and remembers when there was no such thing as a rotary cutter, says that Doris took a risk on hiring her. “I was a stay-at-home mom home-schooling seven children. I had come into the store one day to buy batting and Doris offered me a job. She took a chance on me and it’s been a good fit.”

Doris’s employees have been with her for years. “Doris has manners you don’t find these days,” comments Connie. “She always makes it right with her customers, always. She’s absolutely a lady!”

Blue eyes twinkle as Doris nods her head, noting, “You make mistakes but you learn from them and carry on. You may offend someone and not mean to, but, you make it right with them.”

“Call me the worry-wart,” acknowledges Doris, “but I’ve seen my share of problems and have gone through the ups and downs.”

After losing Frank, Doris arrived at a crossroads in life. She actually considered selling the store. Challenges popped up everywhere hitting her from all sides…financial problems, employee concerns, along with her grief. “The store sank,” says Doris.

It now seemed like selling the business was the thing to do. A couple offers materialized, however nothing panned out. Doris doesn’t hesitate in saying she received some divine intervention. “The Lord knew I needed the store,” she says with a resolute voice. “I had to have a purpose.”

In an effort to bring sales back up and revive the store, Doris recognized that things had to change. “There was money in the bank and life was good” when she and Frank had worked side-by-side. “It’s amazing how quickly your financial picture can change,” states Doris. “I learned to pray! It was a miracle that I survived in the store.”

Doris soon hired an expert repair man and since then another has joined the organization. Doris gathered her team of dedicated people. This is when she says the store started turning around. To her credit, Doris leads by example, unveiling no fear of doing any job the business requires.

Her purpose promotes working hard, helping others and sharing successes with her team. The store has twice received Bernina’s District Dealer of the Year award. Even more impressive, Doris and the team have received the prestigious Presidential Award.

Bernina selects one dealer in the nation each year based on excellence in sales and customer service. “Not in my wildest dreams did I ever expect this award,” confides Doris. “I had sunk so far and was able to come back. If you don’t have a dedicated loyal staff you don’t have much.”

Nor did she ever think or dream she’d be the biggest quilt shop around. With tears brimming, this business “lady” shares a life’s lesson… “I tell you it teaches you a lot about your struggles. It made me a better person. I had to be.”

“She’s a very astute business woman,” reflects longtime Bernina worker Myrt Wittenberg, who retired from her RN career to enjoy a second career. “When the chips were down, Doris hung in there and survived. She didn’t give up. She’s managed to stay afloat for 31 years.”

Doris continues to take risks and reap rewards. She says one of the biggest bonuses is “getting to know so many wonderful people” over the years. The best advice she offers for up-and-coming business women is, “You have to continue to grow…standing still doesn’t work.”

Doris Holzer & the Bernina Sewing Center are located at 1505 Rehberg Lane in Billings or on the web at billingsbernina.com