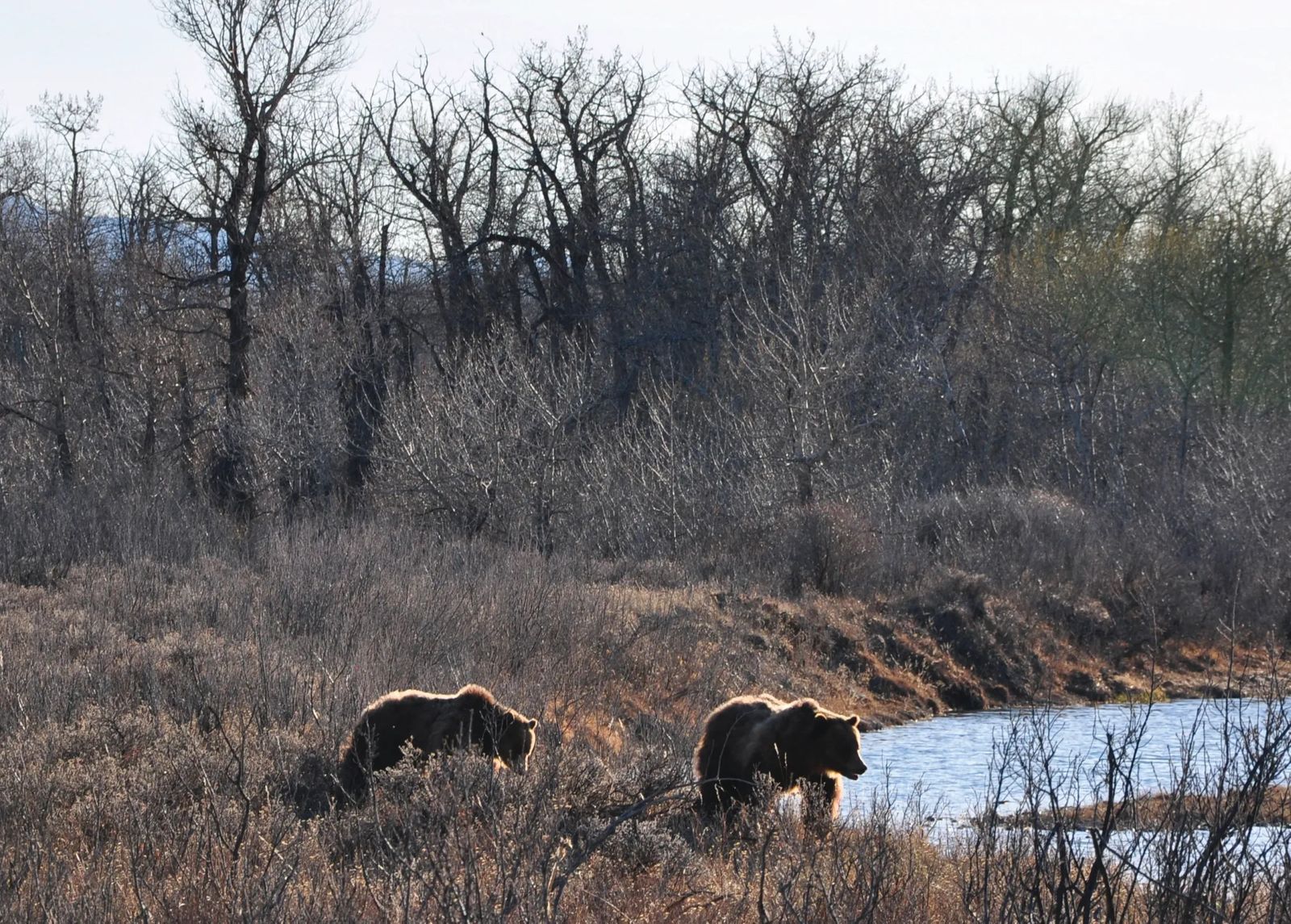 Grizzlies on the Move

Grizzly bears are no strangers to the prairie. Historically ranging eastward as far as the Dakotas, they’re once again moving into their previous home range, although now, instead of bison, the land is teeming with domestic livestock and potential conflict.

No longer confined to the mountains, grizzlies follow the river corridors to new territory, which means seeing a grizzly in a wheat field is no longer an anomaly. They’re commonplace in Valier and Conrad. They’re venturing out to Shelby, Benton Lake (north of Great Falls), as well as Two Dot in the Little Belt Mountains.

“It’s likely we’ll have a grizzly bear along the Smith (River) within the next decade,” says Mike Madel, Montana Fish, Wildlife & Parks Region 4 bear biologist out of Choteau. 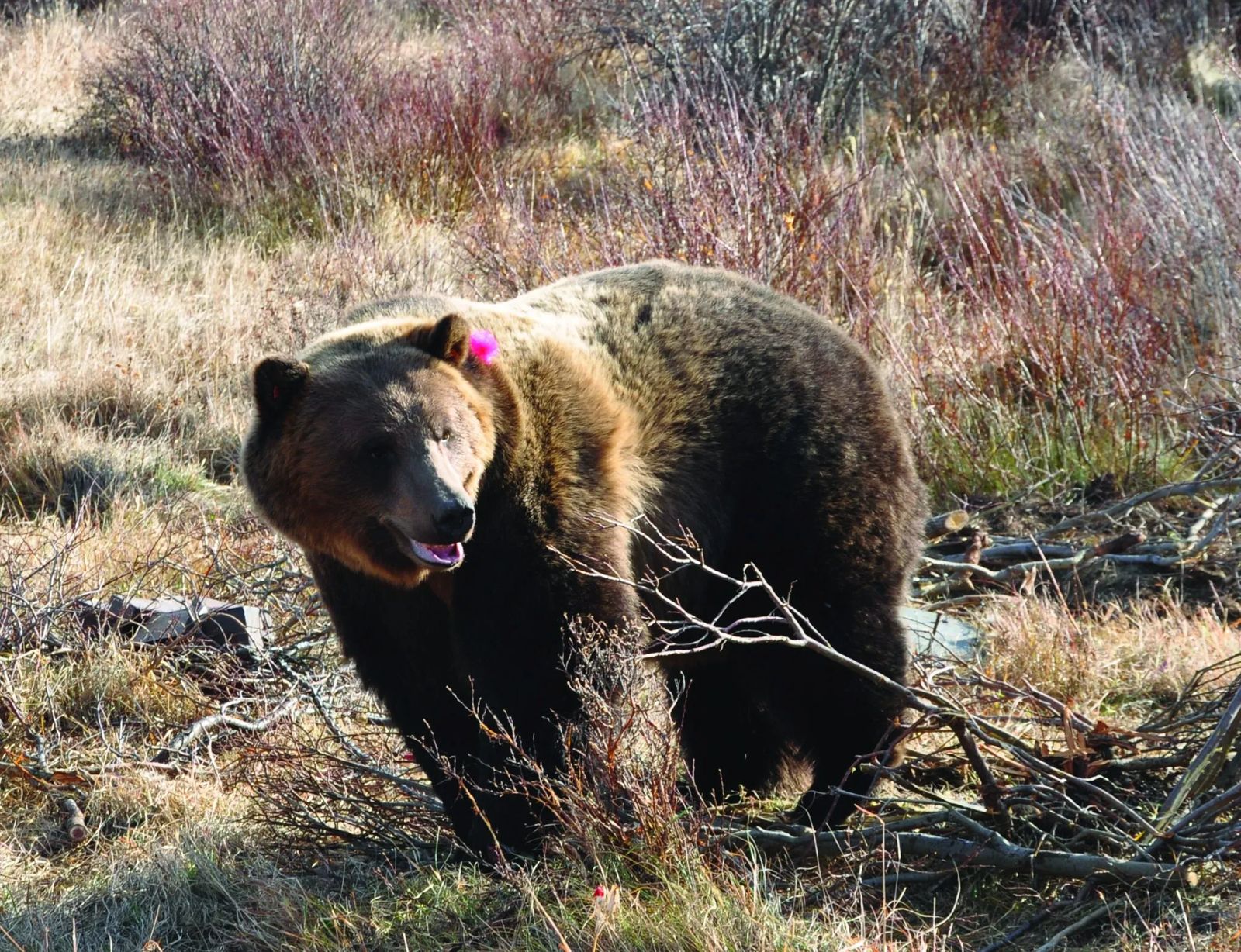 Madel says the female cubs tend to take a portion of the mother’s range, while the young males seek new territory. Much of the range along the Rocky Mountain Front is already occupied by established bears, so they head east. And while grizzlies that ventured onto the prairie previously relocated to the mountains to den up for the winter, this pattern is no longer the case.

“Females are hibernating on the high plains,” Madel says. “That is pretty major.” Instead of climbing to elevations of 6,000 to 7,000 feet in the mountains, they are utilizing leeward slopes in prairie benches, as well as the river bottom bluffs.

Residents, particularly agricultural producers, of these areas where grizzlies have not roamed for a century are often concerned about how the bears might affect their safety, as well as the safety of their livestock or crops. The situation carries a sense of déjà vu for Madel.

“I heard the same things in Dupuyer, Augusta and Choteau 30 years ago,” says Madel, when grizzlies began occupying the Rocky Mountain Front after being absent for decades. Ranchers were concerned about what living with grizzlies might entail.

“In general, most of them realize it’s not a big inconvenience or an issue,” he says. “It amazes me how ranchers have adapted to grizzlies on the Rocky Mountain Front.”

But having grizzlies and livestock in proximity to one another is not always conflict-free. “The first time we had bear depredation was 2011,” says Lisa Schmidt of the Land of Grass Ranch in Conrad. “It was really early, early June right at the end of lambing season.”

Schmidt says when she went out to check the sheep around 5 a.m., dead ewes were scattered all over. They were on their backs, some with their udders eaten away. And after further investigating the area later on, she realized the bear was most likely just east of the barn when she was assessing the horrifying scene, which was an uneasy thought. 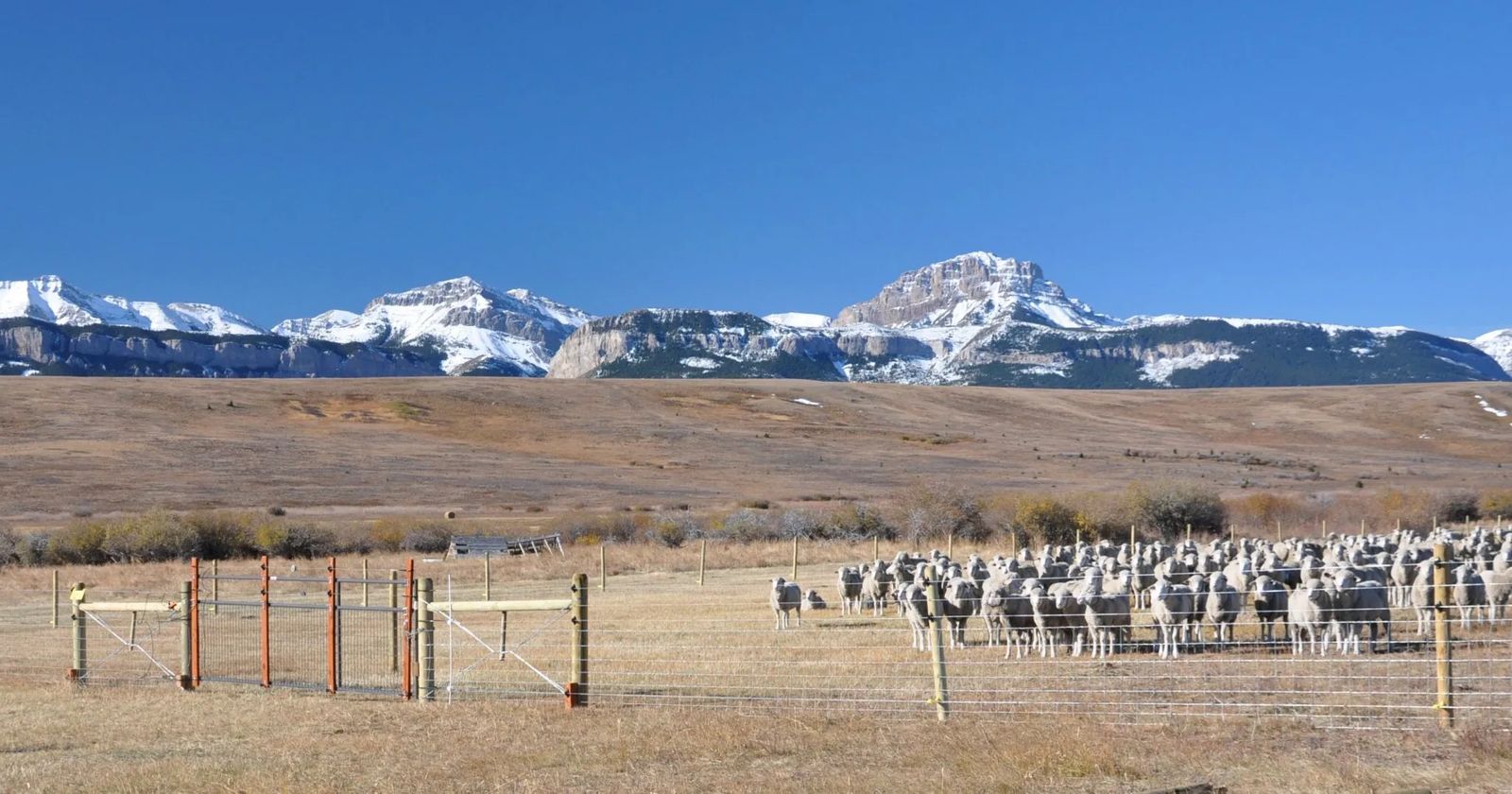 “It took them three days to trap the bear,” Schmidt says, and in the meantime, it slaughtered more sheep at a nearby ranch.

During another instance on a misty April evening, she says, “I looked out the window in my yard, and there was a grizzly at the picnic table maybe 20 feet from my window.”

She says it rubbed on the side of the house, then ambled towards the corral, which is precisely where she and her husband, Steve Hutton, did not want it to go. They headed out, with Schmidt banging a pot and lid to scare it away. “I used my school teacher voice,” she says. “It stood up and looked at us.”

Schmidt’s frustration, outside of losing the sheep she’s taken care of for years along with the new lambs, is having her hands tied in protecting them.

“The law says I can’t defend my livestock from this predator,” she says. “We’re working on getting the laws changed, and it will come.”

But she is quick to point out that, in reality, a lot of the conflict depends on the individual bear. She says there’s a sow with a couple of cubs that has been in the area for nearly eight years.

“She’s scared to death of humans. She’s fine because she’s afraid. She’s not hunting anything, and she’s keeping the other bears (outside of boars) away.”

For the most part, the bears along the Rocky Mountain Front, along with the ones dispersing onto the plains, offer minimal conflict, particularly considering their populations and the number of livestock.

“Some people have seen grizzly bears on the prairie for years without any damage,” says John Steuber, state director and supervisory wildlife biologist with USDA/APHIS Wildlife Services in Billings. But this isn’t always the case.

Steuber points out that the number of complaints concerning grizzly bear predation nearly tripled from 46 reports in 2014 to 138 in 2018. “It’s not just on the prairie or the Rocky Mountain Front,” he says pointing out that there were no reports of grizzlies in the Gravelly Mountains or northeast of Red Lodge before five years ago. Now, they deal with them from early spring to late fall.

“Grizzly bears are much less predatory than wolves,” Steuber says, “but when they do start killing it is difficult to remedy it.”

Around Red Lodge, some producers, and subsequently wildlife managers, are facing a nightmare situation with particular bears killing cows and calves, then leaving the area and avoiding capture. “Grizzly bears have no trouble bringing down an adult cow, especially yearlings,” he says, and when the bear in question is wary and smart, it’s a troubling scenario. 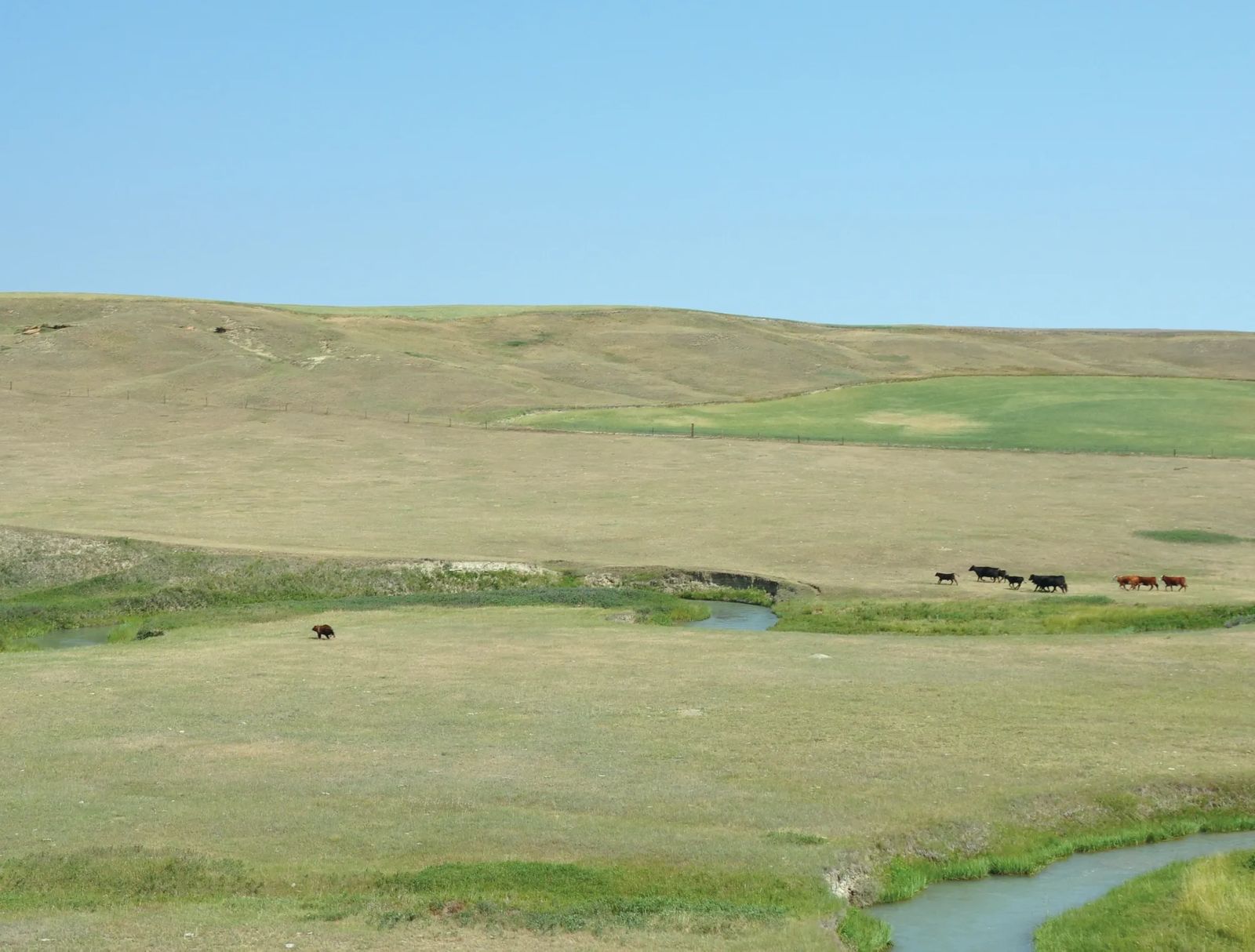 This is why avoiding this situation in other parts of the state is imperative. Eliminating, or at least reducing attractants, is first and foremost, although this isn’t an easy feat for an animal that will eat practically anything and has a nose seven times more acute than a bloodhound’s. From pet food sitting on the porch to a flock of chickens or spilled wheat in the field or at the bins, it doesn’t take much to catch a bear’s attention.

FWP is stepping up its efforts through social media and community education, and is lending a hand to remove attractants to reduce potential conflict whenever possible. The agency offers to pick up dead animals, but Schmidt says this runs contrary to the independent nature of ranchers. “It’s innate in a rancher’s personality not to share the failures,” he says. But since boneyards are a good source of protein for the bruins, it’s only logical that if there is one on the ranch, the bears will find it.

“Grain is a really major issue as they expand into farming ground,” Madel says. “There are hundreds and hundreds of grain bins. We work with a lot of farmers. You can electrify the grain bins.” Since grizzlies have torn the doors off of bins to reach the ample food supply, this is a necessity for some.

To minimize extraneous grain on the ground, FWP recommends using tarps under loaders when transferring grain to make cleanup quick and easy. The agency also has a vacuum trailer (made possible by funding through the Fish and Wildlife Service, Defenders of Wildlife, and Montana Outdoor Legacy Foundation) that it will bring over to help clean up larger spills. 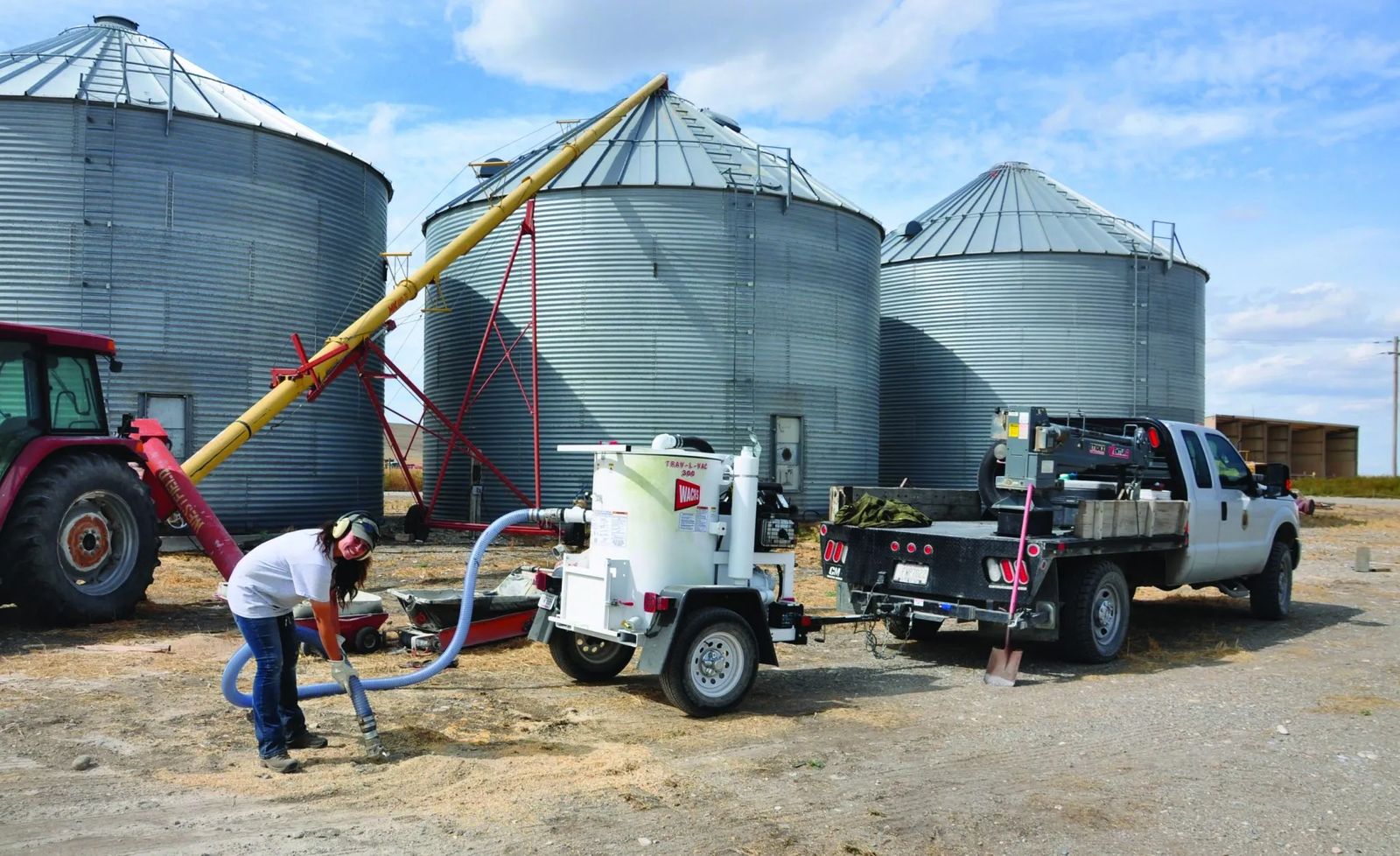 Sheep are particularly vulnerable, and frankly, easy to kill. “If you put sheep into a night bedding ground (surrounded by an electric fence) you’ll reduce, if not stop, depredation,” Madel says. Electric fencing is equally efficient in stopping coyotes, which in reality are a herd’s primary predator.

“Some smaller operations bunch the cattle at night,” Steuber says, while others provide an increased human presence with one to four people moving the cattle during the day. This consistent presence appears to significantly reduce predation issues even in areas that are in dense grizzly country.

When there is a depredation situation, it’s currently up to the federal and state agencies to work together to figure out the best response to each occurrence.

“Normally, (ranchers) call the game warden or wildlife specialist,” Steuber says, and the federal wildlife specialist will investigate the situation, preferably along with FWP personnel. “If we capture the bear, we work with FWP to figure out what to do, whether to relocate or euthanize it.” 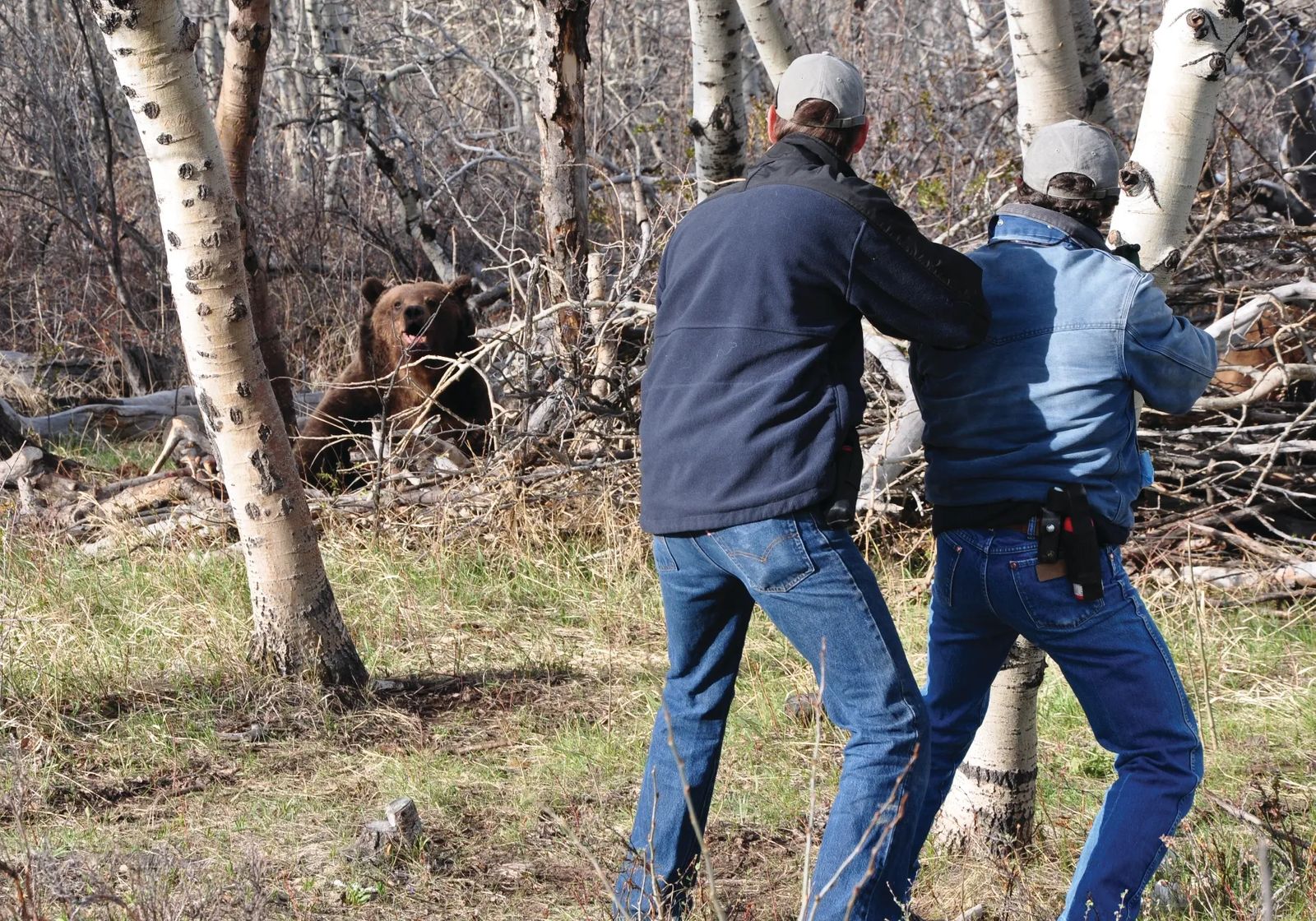 What is done with the bear depends on multiple factors including the particular bear’s history, as well as whether it’s a female (especially with cubs) or male. Females with cubs typically receive at least one pass and are moved to areas where there isn’t as much livestock, but it is not unusual for the bears to return from hundreds of miles away.

Steuber says employee safety is a growing concern, since wildlife experts are often venturing into the area alone on foot or by horseback, knowing that there could be multiple bears protecting a carcass in the area.

Living with grizzlies adds a completely new dimension to farming and ranching life.

“It’s neat to be in such a wild place that there are apex predators,” Schmidt says. “I think there’s a place for grizzly bears. I just need to be able to protect my family and livestock.”