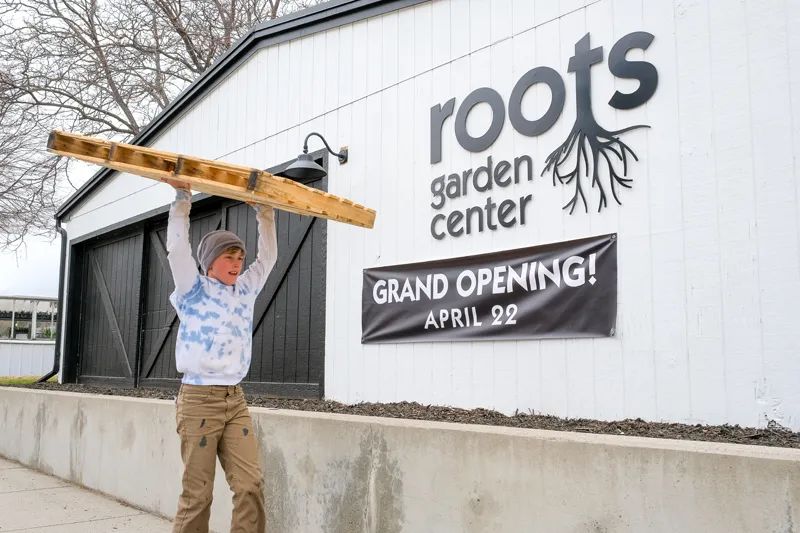 Jerry Anderberg has been digging in the soil for close to five decades. With a degree in horticulture, he’s made a business out of it, helping homeowners make sure the grass is not just greener on the other side. Over the past few years, he’s seen a gardening trend take root. More and more of his clients are turning to raised-bed gardens to grow fresh fruits, herbs and veggies.

“I think a big part of it is space,” Anderberg says. “The lots in town are a lot smaller than they used to be. The big two-acre lots aren’t around anymore. They are very rare.”

The concept behind a raised bed is to bring gardening 12 inches to several feet off the ground, letting green thumbs tend to the area without breaking their backs.

“We can build a box at waist level so that it is just like you are working at the countertop in the kitchen,” Anderberg says. 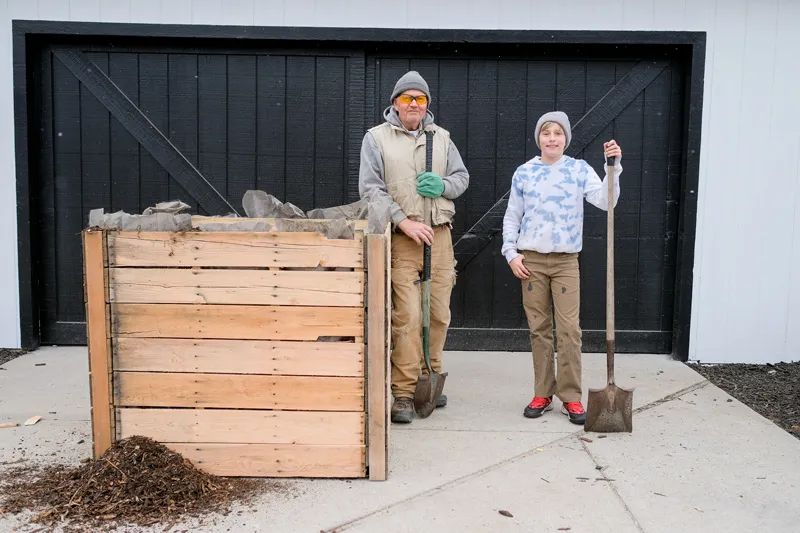 Ever since the 2008 recession, he’s seen the overall interest in gardening pick up. While part of the reason is economic, during the pandemic it became a lockdown hobby. Interest spiked to the point that seed company shelves were wiped out. The trend doesn’t appear to be letting up in 2021.

With the popularity, Anderberg saw a way to help his 12-year-old grandson, Jack Switzer, learn some business skills and help a good cause in the process. Together, the two are building raised-bed garden boxes for a suggested donation, with the money raised going to benefit Community Leadership Development Inc., a nonprofit that seeks to help low-income neighborhoods thrive.

“We recycle pallets and construction materials and that’s what we build our boxes out of,” Anderberg says. “We even take dirt from construction sites that is going to be thrown away and mix it with our own compos. We are providing a needed service for our community in the fact that the community is going to eat well and CLDI benefits.”

If you’re concerned about animals, or even the elements, Anderberg has thought out of the box for solutions.

“If they want, they can have a little greenhouse cover made right over the top of the bed. We make that out of recycled material too,” he says. “We use pipe for hoops and greenhouse sheeting that has been taken off after a certain amount of time. We can also put a net over them for deer if that’s an issue.”

Have you been longing to turn a little patch in your backyard into a gardening hot spot? The experts say anyone can tackle a raised bed.

“If you live in a condo or a place where you don’t have a spot for a garden but you have a nice patio or deck, this provides you the opportunity to have some fresh herbs or fresh greens,” says Pat Friesen, who’s spent 30 years running greenhouses and now shares advice with customers at Evergreen Ace Hardware.

“People generally do several things wrong,” he says of raised-bed gardening. “They put a plant that needs a lot of soil in too small of a container and they use poor soil. Those two things set people up for failure.”

Instead of digging up soil from the backyard and dumping it into your container, Friesen says its important to amend any topsoil you use. “Topsoils are fairly heavy and they don’t allow for much drainage. You need something that will be nutrient rich.”

Andrew Marble, a landscape designer with Billings Nursery, says if you want to use topsoil as a base, simply add in a little compost. He says vermiculite can help loosen the soil and peat moss can be added as well.

“Peat moss retains water, but it is also a soil conditioner and helps loosen the soil,” Marble says. “It does slightly acidify the soil, too, which is good in our climate.”

And here’s another tip on soil. You don’t have to fill the entire raised bed with it. If you have a taller bed, you can use a light gravel at the bottom to promote drainage. How much gravel will depend on the plants you desire to cultivate and their root systems.

“Because you are starting with good soil, you are generally able to produce a higher-quality product in a small space,” Marble says. And with new soil, he says, you typically have less weeding as well.

After you plant, all the experts agree that a fertilization timetable is key.

“When you plant something in a small container, the roots don’t have the advantage of spreading down into the ground,” Friesen says. “When you water a raised bed on a regular basis, you are leaching out all the nutrients. You should have a fertilizing timetable or use a time-release fertilizer that releases over a four-to-six-month period.” 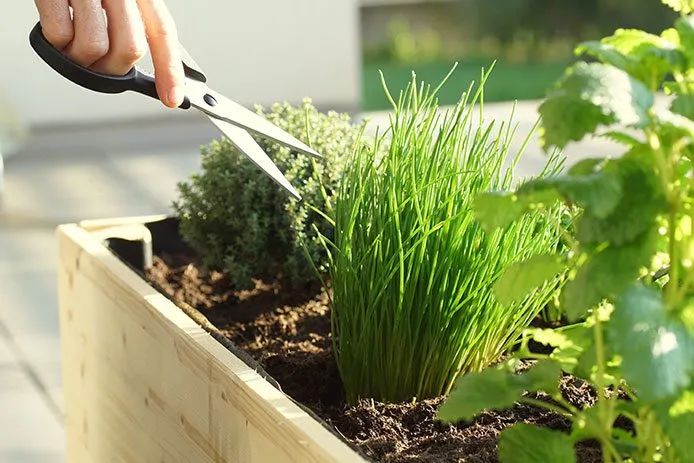 When it comes to plants, there are really no rules other than what the seed packet or informational plant stake dictates. You have to think of sun exposure, root depth, how much room the plant needs to flourish and how tall it might get.

“The raised bed will dry out quicker,” Anderberg says. “You really have to watch the soil and make sure in the hot weather, especially when the wind is blowing, that you keep the bed watered adequately. There is a learning curve to all of that.”

If you long to plant tomatoes, cucumbers or beans, which can sprout to be fairly tall, Friesen says just make sure you choose a variety that you can easily tend.

“Tomato plants, if you allow them to grow, they will grow to be six feet tall,” Friesen says. He says that’s why if you want a tomato, look for determinate varieties. These plants tend to mound instead of sprout upward.

You can also plan for your raised bed to flourish all season long with simple plant placement.

“Early on, May 1, when it’s cool, you can plant radishes, you can plant lettuce and put in some onion sets,” Friesen says. “The end of May you can start your bush cucumbers. By the time that plant gets to be of a size that will take up more room in your box, you can harvest some lettuce to make space.” 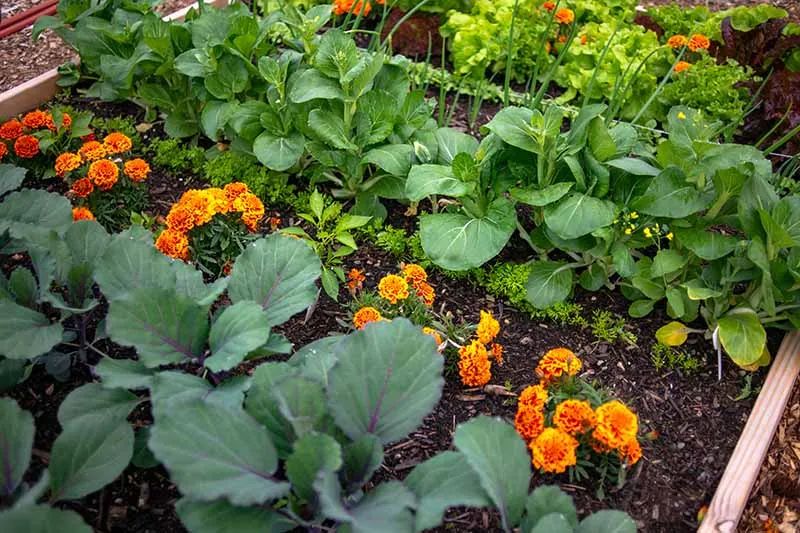 Just because you want to harvest fresh veggies doesn’t mean you can’t have fun by adding colorful flowers into the mix. Besides adding some color and interest, Marble says, it can help a bit with pest control.

“There is a theory to planting flowers with your garden — offering a nectar source near your garden so beneficial insects have a reason to stick around between doing their good business of killing bad bugs and they have a nectar source to eat on. They help keep it under control,” Marble says.

While many have heard that marigolds and citronella can help keep insects at bay, there are really no rules other than picking a compact flower that won’t spread the distance of your garden bed. Anderberg has often planted gladiola and dahlias.

So, with that primer on what it takes to start your own raised-bed garden, you can start day dreaming about fresh basil, cherry tomatoes, cucumbers and even fresh scallions or radishes to toss in your salads.