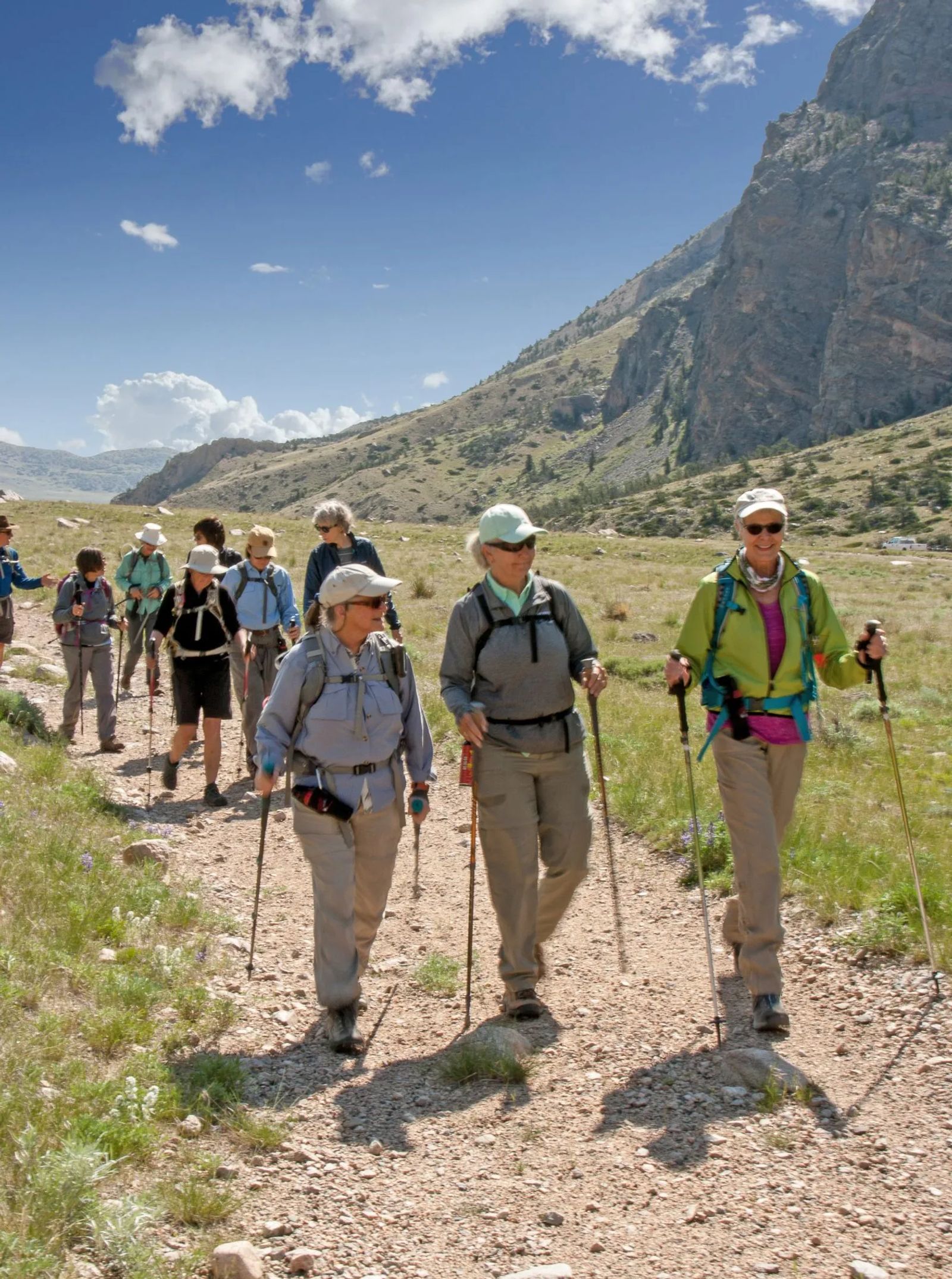 Naturalist and writer John Muir said, “In every walk with nature one receives far more than he seeks.” That rings especially true for those in the Red Lodge Hiking Group. In their weekly outings, they’ve found friendship, bound by the love they all share for the outdoors.

On a sunny day in mid-May, the group, made up of about eight hikers, were on their way up the Clark’s Fork Canyon near Clark, Wyo. Many of them were itching to get out for a longer hike after a cold and wet spring, and the canyon offered the perfect place to connect with friends and experience the outdoors.

The craggy cliffs, raging river and emerging wildflowers offered plenty to appreciate, and at the end of the hike, the group stopped to look for tipi rings and stumbled upon a rattlesnake. Thankfully, the snake’s warning kept everyone safe.

“We had a hard time finding places to hike this spring. It’s been so snowy and muddy,” says Marian Collar, adding that they often head to Wyoming destinations early in the year because there is usually less snow. 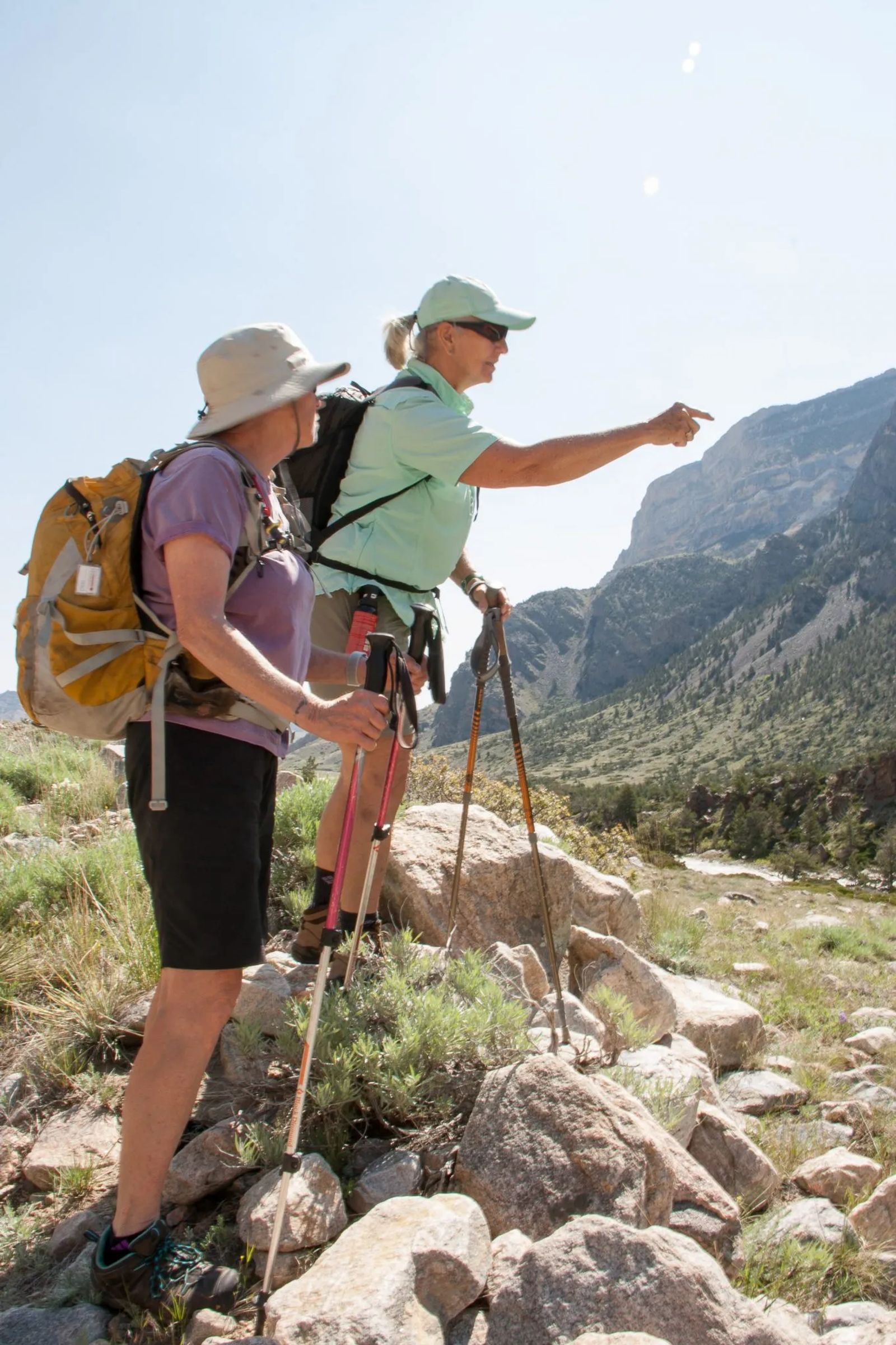 On the Red Lodge side of the Beartooth Mountains, snow can hang on in the high country until mid-July.

“We’ve had to posthole through the snow up there,” Collar says. “You’ve got to be careful.”

Over the years, Collar and the faithful few who come every week have experienced darn near every kind of weather from sunshine to snow and have been on almost every day-hike in the area. In the winter, a few dedicated participants get together to cross-country ski.

Cathy Ritter, the one who almost stepped on the rattlesnake on the trip up the Clark’s Fork Canyon, has been hiking with the group for a year. Ritter and her husband were part-time residents of the Red Lodge area for about 12 years before moving to Roberts about a year ago.

“It’s certainly helped me meet new people and get to know others better,” Ritter says. “There’s nothing like hiking to bond people together.”

Ritter has found that even when hiking in a group, she’s able to experience the peace, wonder and solitude of the outdoors.

“Just getting out is so, so good because it takes you away from all the cares of your everyday life and into someplace beautiful,” she says.

The Red Lodge Hiking Group was started in the mid-1960s by a group of women who were interested in exploring the outdoors. Lucille Olds and Marge Strum were instrumental in establishing the group, and from the beginning, it’s been primarily women who have kept the group going. The group is open to anyone, women and men, but overall the group is made up of mostly women, and most are in their 60s and 70s.

Collar maintains an email list that includes about 60 interested participants. Some are active members and others might only make one or two hikes a year. Nevertheless, they’re always welcome. Early in the week, Collar sends out an email letting folks know where the group is headed, though that could change depending on the trail conditions and how many people show up.

There is very seldom fewer than six people, but on a couple of days as few as two have shown up, and sometimes and as many as 12. When there’s a large group they split into smaller groups and go separate ways. Sometimes, beginners will band together for easier hikes when the rest of the group tackles some of the longer, more strenuous hikes. 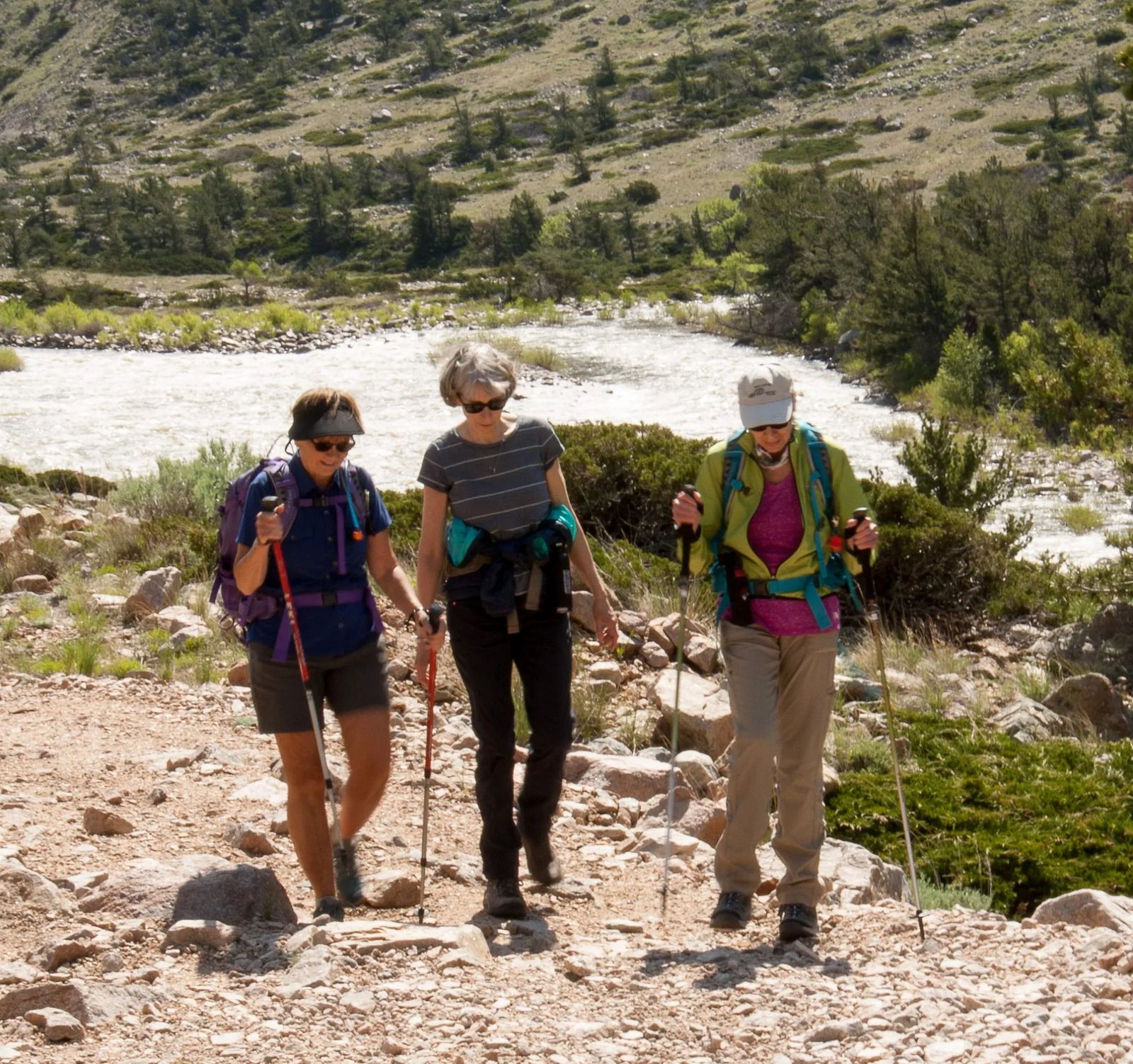 They frequently hike into the Absaroka-Beartooth Wilderness, and it’s not uncommon for the group to hike eight to 10 miles, with about 14 miles being among the longest day trips they’ll take. They try to be home between 4 and 6 p.m. so as not to worry any spouses.

There aren’t any formal rules for the group, except that dogs are not allowed. Everyone is expected to come prepared for the conditions with appropriate footwear, clothing, plenty of water and a lunch. Though most of the hikers carry bear spray, they’ve never encountered a grizzly bear. In fact, wildlife encounters of any kind are rare. 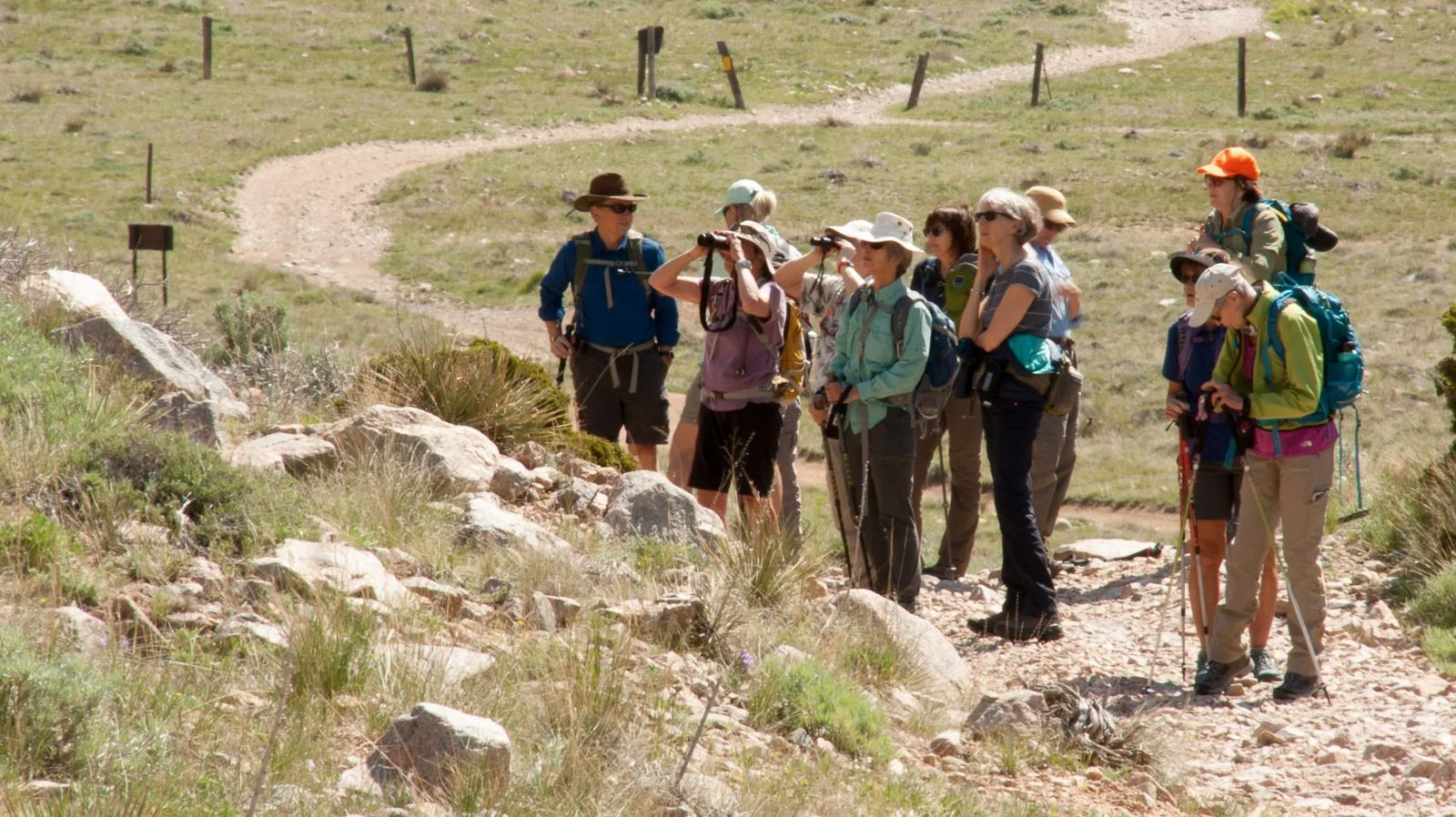 “We’re not very quiet — you know women — so we haven’t had any problems with bears,” Collar says. “They all hear us coming and take off.”

From one another, they have learned the geology and history of the area as well as details about the plant and animal life, how to predict the weather and many other good-to-know hiking tips. The Clark’s Fork Canyon trip included a debate about what to wear to avoid ticks. The group was split on whether light or dark colors were better.

Donna Hight has been hiking with the group since 2006. When she first moved to Red Lodge, joining the group helped her find friends and make connections in the community. After a while hiking with the group, Donna and a few other members were drawn to try overnight backpacking, which she still enjoys.

“It’s led to more trips,” she says. “There’s nothing like being out in nature to clear your head.”

Several members of the group have traveled internationally together after meeting in the Red Lodge Hiking Group. Patty Schuessler and two other women hiked the Dolomite Mountains of Italy last year.

“It was spectacular,” Schuessler says. “It’s just wonderful getting a different perspective in another country.”

Even after hiking in Italy, she says she’s still excited to get out in her own backyard. There are dozens of hikes she’s yet to take.

“There isn’t a hike where we didn’t have at least one person comment about how lucky we are to be in such a beautiful place,” Schuessler says. “And if it isn’t said by someone, it’s certainly thought by everyone.” 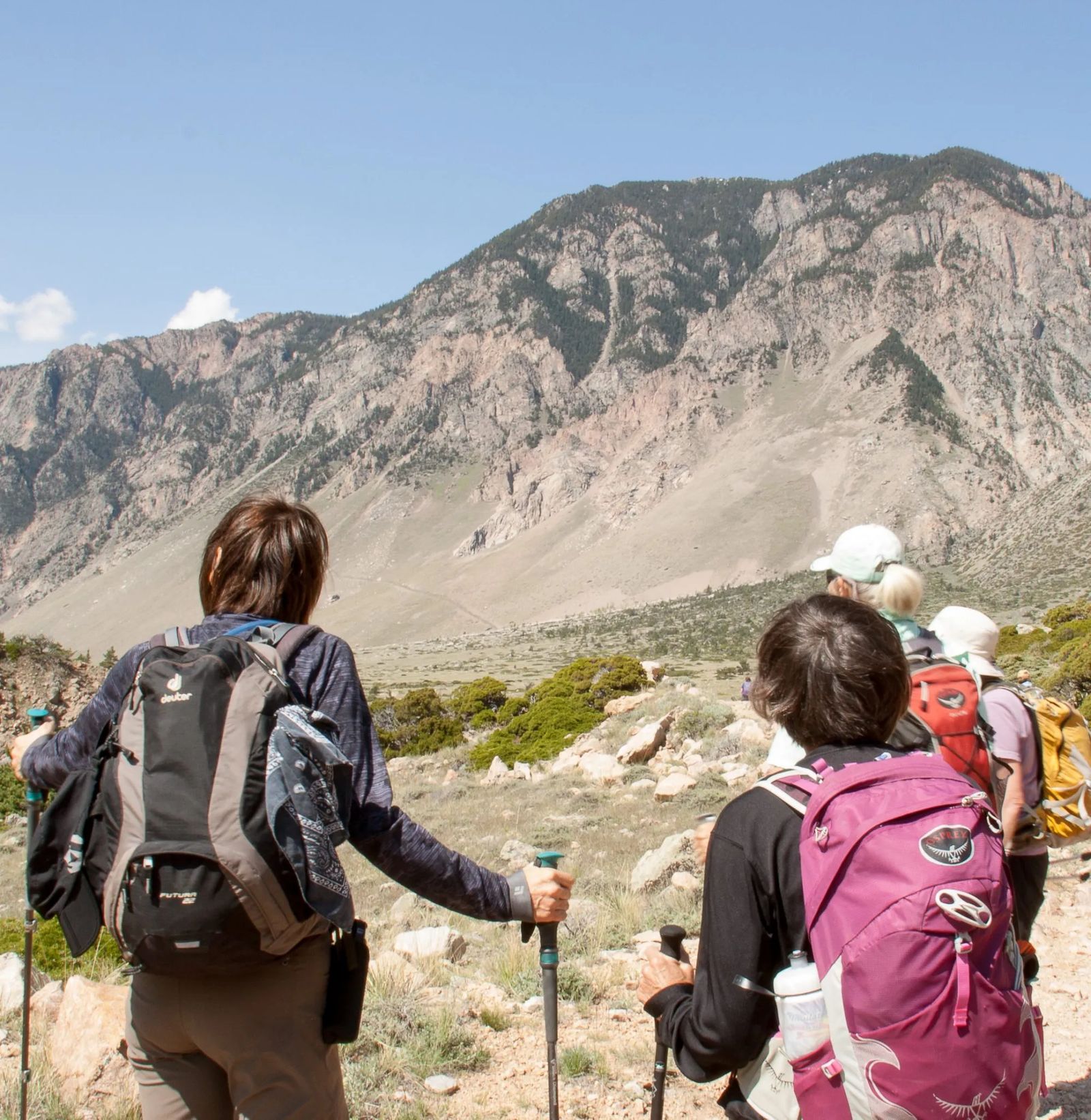 TAKE A HIKE
5 area treks that are sure to please

Elk Lake, 6 miles out and back, easy

Begin at the East Rosebud Trailhead, seven miles past Roscoe, and along the well-established trail, expect remarkable views of East Rosebud Creek and 11,000-foot Shepard Mountain. The beautiful lake offers a sandy beach, the perfect place for a picnic.

Quinnebaugh Meadows, 10 miles out and back, easy

Start at the end of West Fork Road, 13 miles from Red Lodge, and follow the well-marked trail as it follows the West Fork of Rock Creek to a wide, sweeping high-mountain meadow. Continue up to beautiful Lake Mary, another steep mile-long hike off the main trail.

Beartooth Lake Campground on Beartooth Pass is the trailhead for this hike, and the route begins with a creek crossing. Once past that, the trail follows the shoreline of Beartooth Lake before leading to a chain of lakes including Beauty and Crane lakes, offering a variety of terrain and beautiful views.

Glacier Lake, 4 miles, out and back, strenuous

Broadwater Lake, 7 miles, out and back, easy

The trail begins at the end of Lake Fork Road, nine miles south of Red Lodge. The easy route follows the Lake Fork of Rock Creek, offering lots of places to stop, making it a good hike for families with children. Broadwater Lake is a wide spot in the stream, and a little past Broadwater is Lost Lake, also worth visiting.

HIT THE TRAIL
Check out the AllTrails App

Discovering nature is just a click away, no matter where you are. This app shares all nearby hiking, biking, backpacking and running trails based on your location. Log your hikes as you go and share what you liked about each spot with other users.