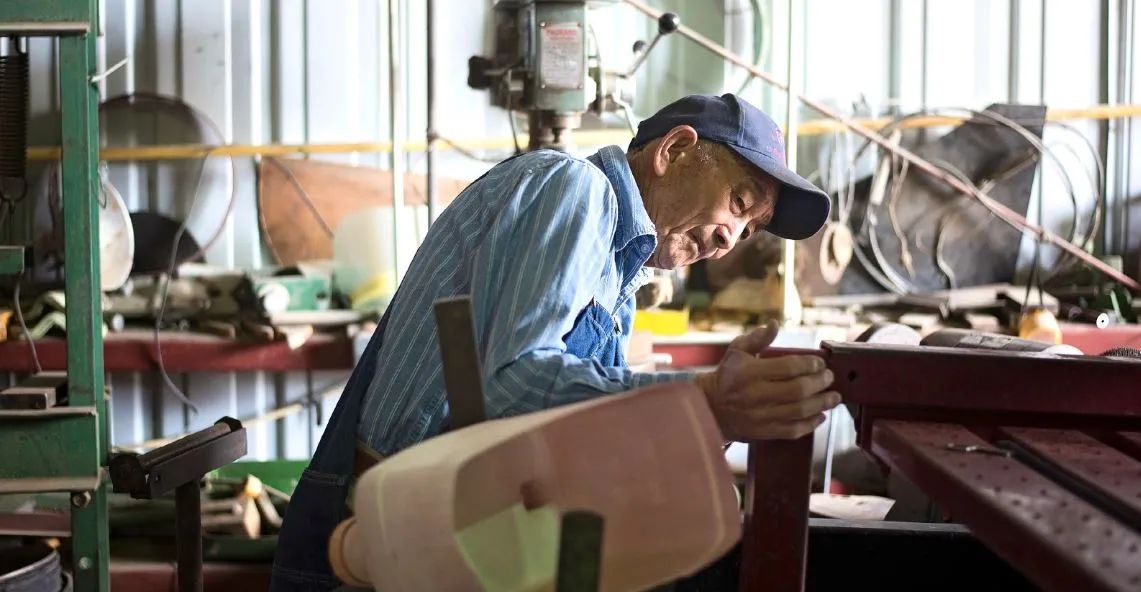 His Heart is on the Land

Tak Ogawa is still farming at 91

“This country’s been good to me,” says Tak Ogawa. When he speaks the words, you come to understand that this immigrant is referring to both Powell, Wyoming where he’s lived for 67 years, and the United States as a whole. Tak came to the Big Horn Basin as a 23-year-old farmer with big dreams and a desire to make a home. It’s pretty obvious he feels he has succeeded far beyond what he could ever have imagined. 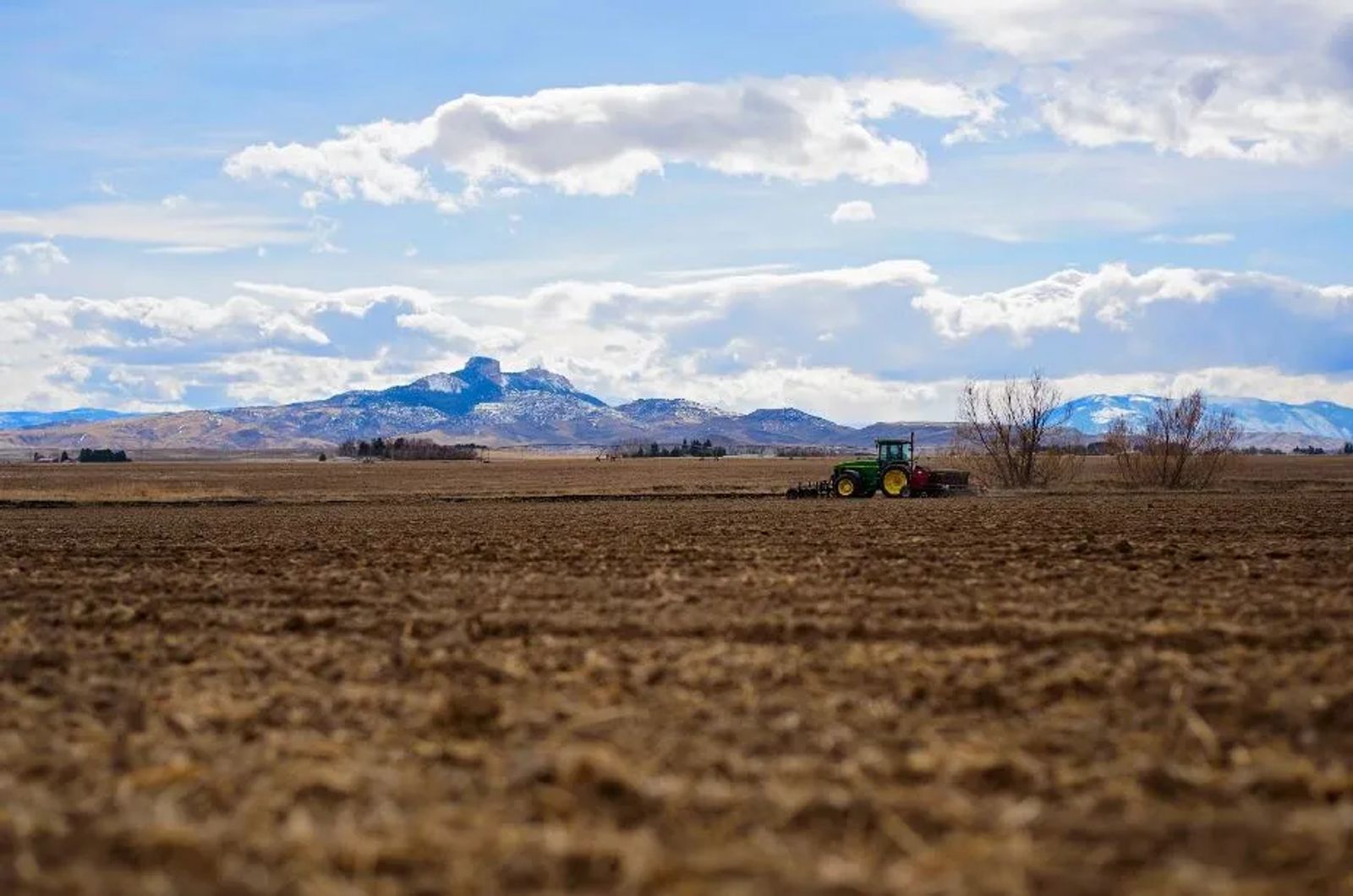 Tak Ogawa’s home sits sweetly on the northeastern slopes of Heart Mountain, where the farms are big and the roads are straight, bisecting the rich soil in geometric shapes. He lives about 20 minutes from Powell, far enough up on the flanks of the mountain to get a wide angle view of the area. A forest of conifers surrounds the modest, well-built home. The trees are old and tightly spaced, sheltering the home from the ever-present wind. Other homes in the area have large trees, either cottonwoods or spruce, but nothing like Ogawa’s trees.

As I made my way up to his home, my assignment was simple. I was to talk to Tak about his life and the reasons why he’s still farming at 91. I hoped to peel back the layers to uncover an interesting story. After an hour and a half with this humble and spry man, I discovered more than just a story. I got a glimpse of a life well lived.

Tak Ogawa was born in Idaho Falls, Idaho in 1925 the fourth child of seven children born to Japanese immigrants. Tak’s father might have journeyed to America to work on the railroad, but after a brief visit back to Japan to find a wife, he returned with his bride to start a new life farming, raising a family and crops in the soil of Idaho. Tak knew he wanted to be a farmer as well. He says, “Well, I didn’t know anything else, so I stuck with it.” 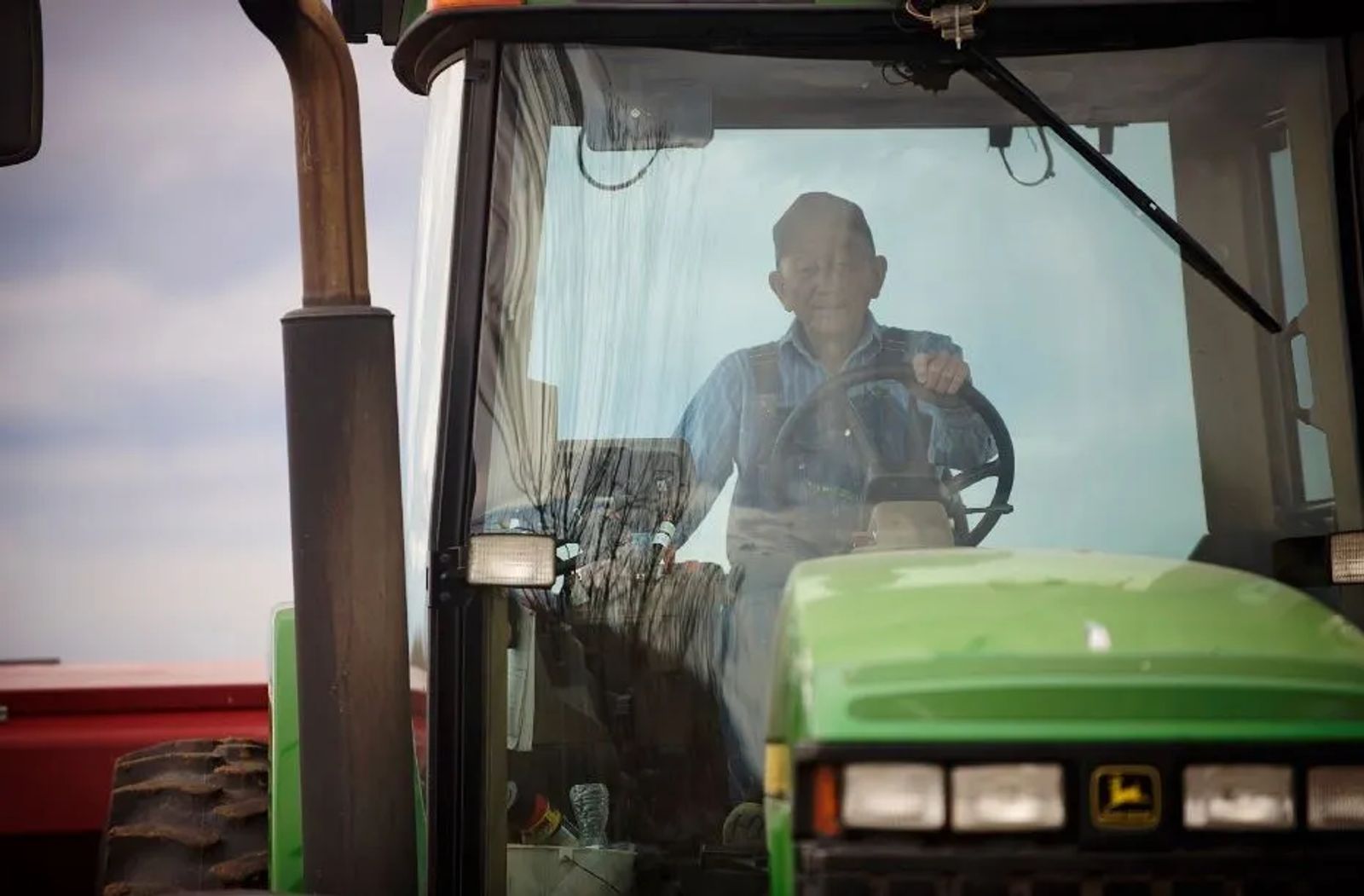 At 16, Tak enlisted in the Navy. The year was 1941. Not long after his basic training at Farragut Naval Training Base at Lake Pend Oreille, came December 7, 1941 and with it the news of the Japanese attack on Pearl Harbor. “I was all of a sudden classed as 4C. Do you know what 4C is? Enemy Aliens. They let us go. They let all the Japanese in the service go. They didn’t want to have anything to do with us.”

With those orders, Tak made his way back to the family’s Idaho Falls farm. “We were too far inland to get sent to an internment camp. They only sent folks along the coast to those camps.” His family did have restrictions though — they weren’t allowed to travel more than five miles from home, they couldn’t own firearms or radios. “They took a lot away from us,” Tak says with reflection. Then in 1946, despite being formerly classed as an Enemy Alien, Tak was drafted into the Army after the war in Germany was over. He was inducted at Fort Douglas, Utah, went to basic training at Camp Hood and then was stationed at Ft. Bliss in El Paso.

After his discharge in 1946, Tak returned to his roots in Idaho. He farmed with his parents for a year before leasing some property and equipment to farm on his own for a few years. A twist of fate came when he picked up the paper one day. “I was reading the newspaper and here was this ad. They were taking applications for homestead lots in Wyoming. So I thought, ‘Why not?’” In the late 1940s, the Bureau of Reclamation was dismantling the buildings of the Heart Mountain Internment Camp and seeking to divest itself of land in the surrounding area. Newspaper ads told of a land giveaway to people who met the general criteria – mostly veterans, with a little money and a lot of farming knowledge. Tak applied for a slot in the lottery, then he and a friend drove over from Idaho Falls to give the land a once over.

Tak’s application was number 60 but as other lottery winners withdrew, he moved up to number 50. “They brought us out by groups of 10, so I was in the 5th group.” When I asked why he chose this particular allotment he responded, “It is flat! Our farm in Idaho was pretty rolling so I like the looks of this piece.” Tak ended up the owner of 111 acres and a barrack from the internment camp. “They just cut the barrack in half and then I had it trucked onto the property for $150. I didn’t do anything to it, didn’t even level it up, I just closed off the one end, set it down on concrete blocks and moved in.” 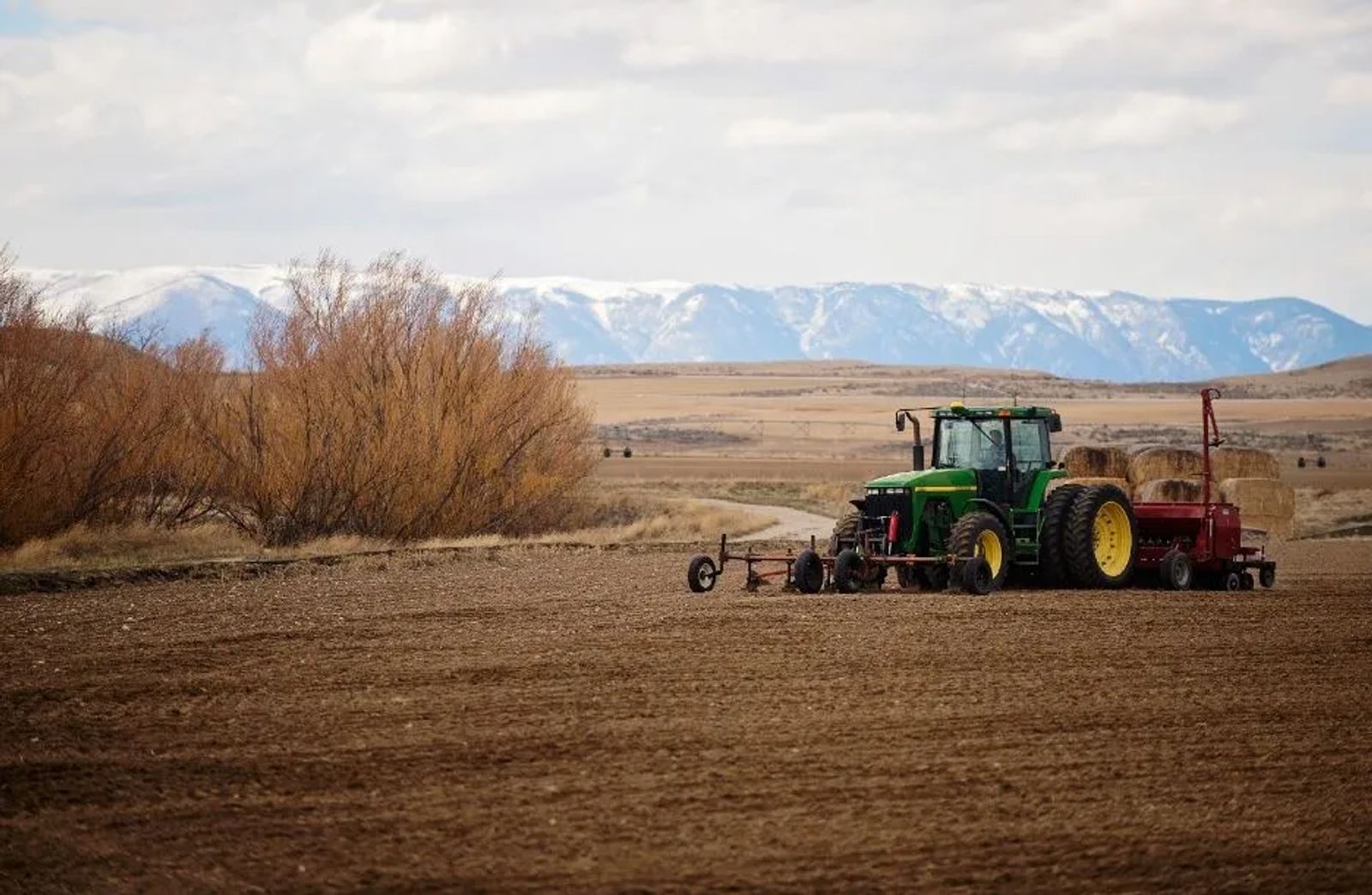 The property was void of so-called modern day conveniences. “I didn’t have water and it was another five years before I had electricity,” he says. “I took a 5-gallon bucket to the neighbor’s for my drinking water every day. That first winter it was -20 or -25 degrees and that water froze solid.” Despite the lack of amenities, Tak was over the moon. “When I got the homestead, I’d never had anything before. Here I had 100 acres and I thought that was pretty good. I was 23 years old and I had 100 acres.”

Life on the homestead was good for about two years. That’s when Tak went back to Idaho Falls for a winter visit and ended up breaking his leg while skiing. The mishap kept him in Idaho for 18 months. As he recuperated, he rented out the homestead back in Wyoming. When he finally returned, he brought a wife, Emmy, with him. Over the years, Tak and Emmy bought a piece of the neighboring land, built a new home on the property and raised four children. He says the memories of the years are strong and good.

At 91, farming still runs through Tak’s blood, although he claims he’s hobby farming now with just 100 acres of malt barley. “I was going to retire in 2011, but that’s when my wife died so I just kept on. I figured I needed something to do. People keep asking me, ‘Tak, when are you going to retire?’ I guess I’ll retire when they plant me over in Crown Hill (Powell’s cemetery).” As a testimony to his life, he says, “You’ve got to have something to do when you get up in the mornings. There are only four us of original homesteaders left and I’m the only knot-head still farming.” 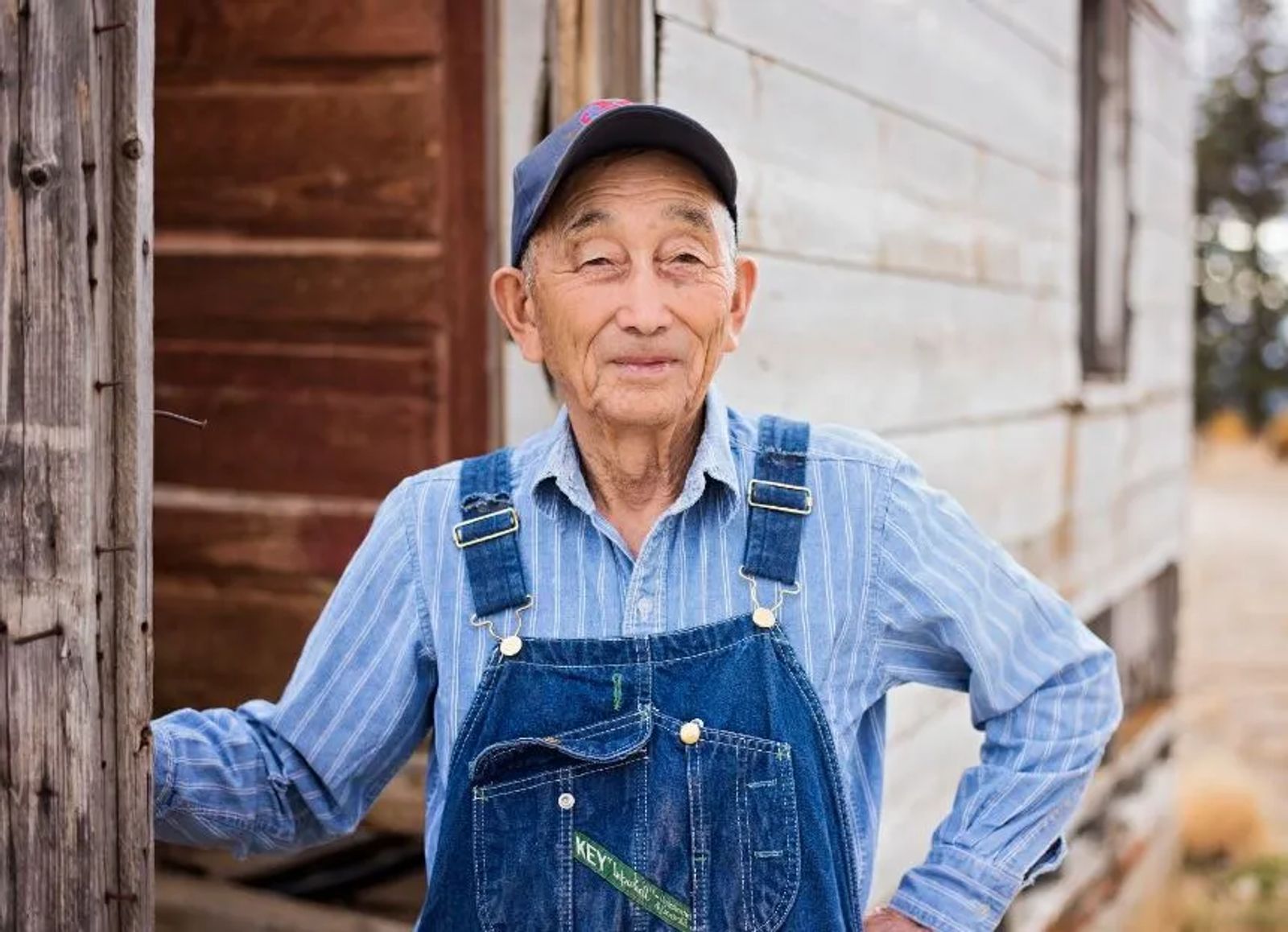 I get the impression that if Tak does ever retire, his heart and mind will still be on the land. He mentioned the improvements in farming practices over the years, from starting out with horses before moving on to GPS aided tractors and combines that practically drive themselves. He knows the going prices for crops, which crops are in demand, various industry trends as well as what’s happening in agriculture on an international level. 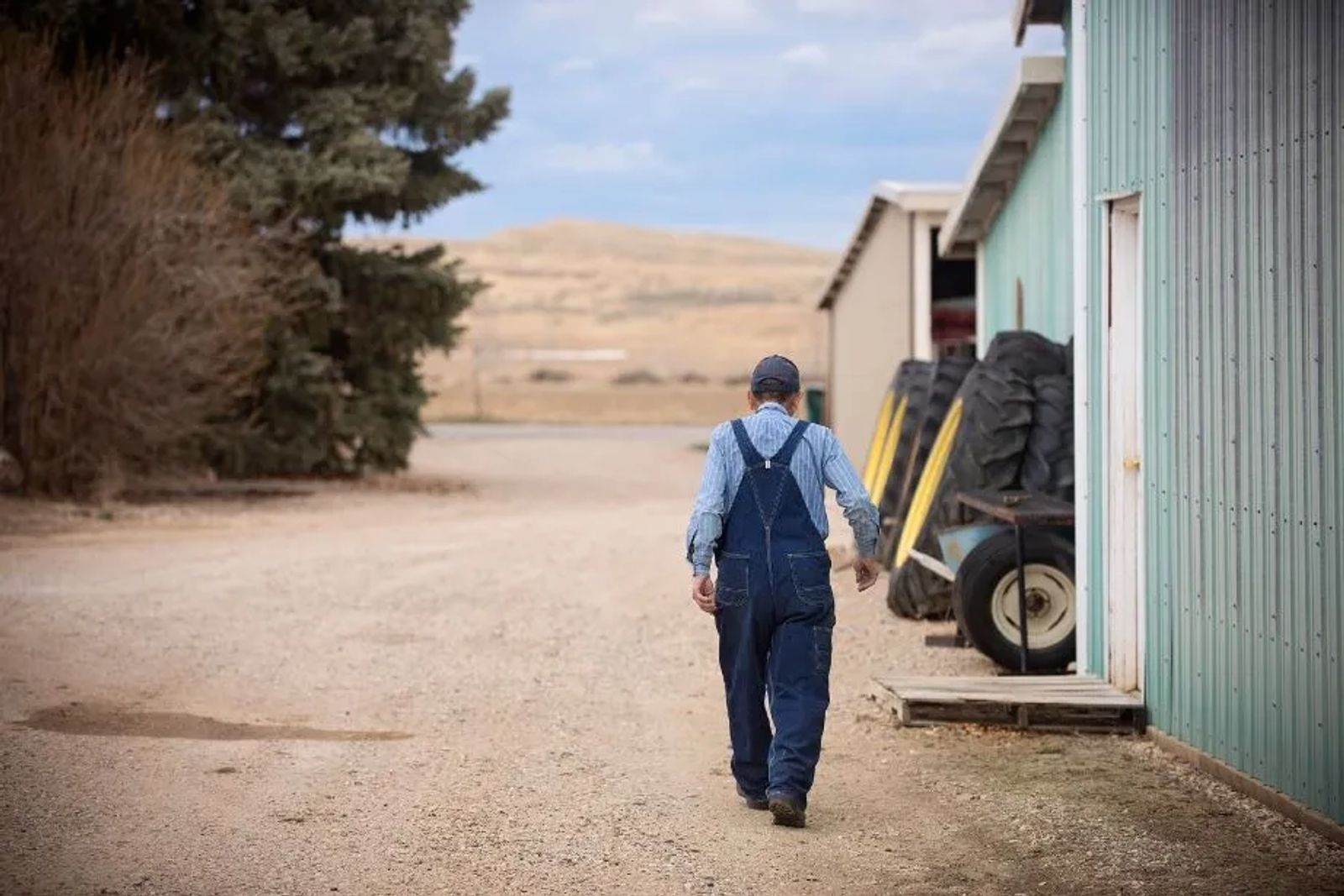 It’s been a good life, but Tak says “I don’t want to go back to the good ol’ days. Farming now’s a whole lot easier than it used to be.” There is, however, an undertone of loss for the sense of community that used to hold this area together. The community used to be close-knit, celebrating and grieving together over the years. Now, although most of the land is still in production, Tak feels that some of it is being bought by folks who want little to do with their neighbors. When asked if he ever thought of moving someplace else, Tak shakes his head and says, “No. I never did. I’ve been here over three-fourths of my life. When I came here I liked the looks of the country and the irrigation system is one of the best in the world. I’ve got good neighbors that check in on me and invite me over for dinner.” For Tak Ogawa, this is home. “I really like it here.”