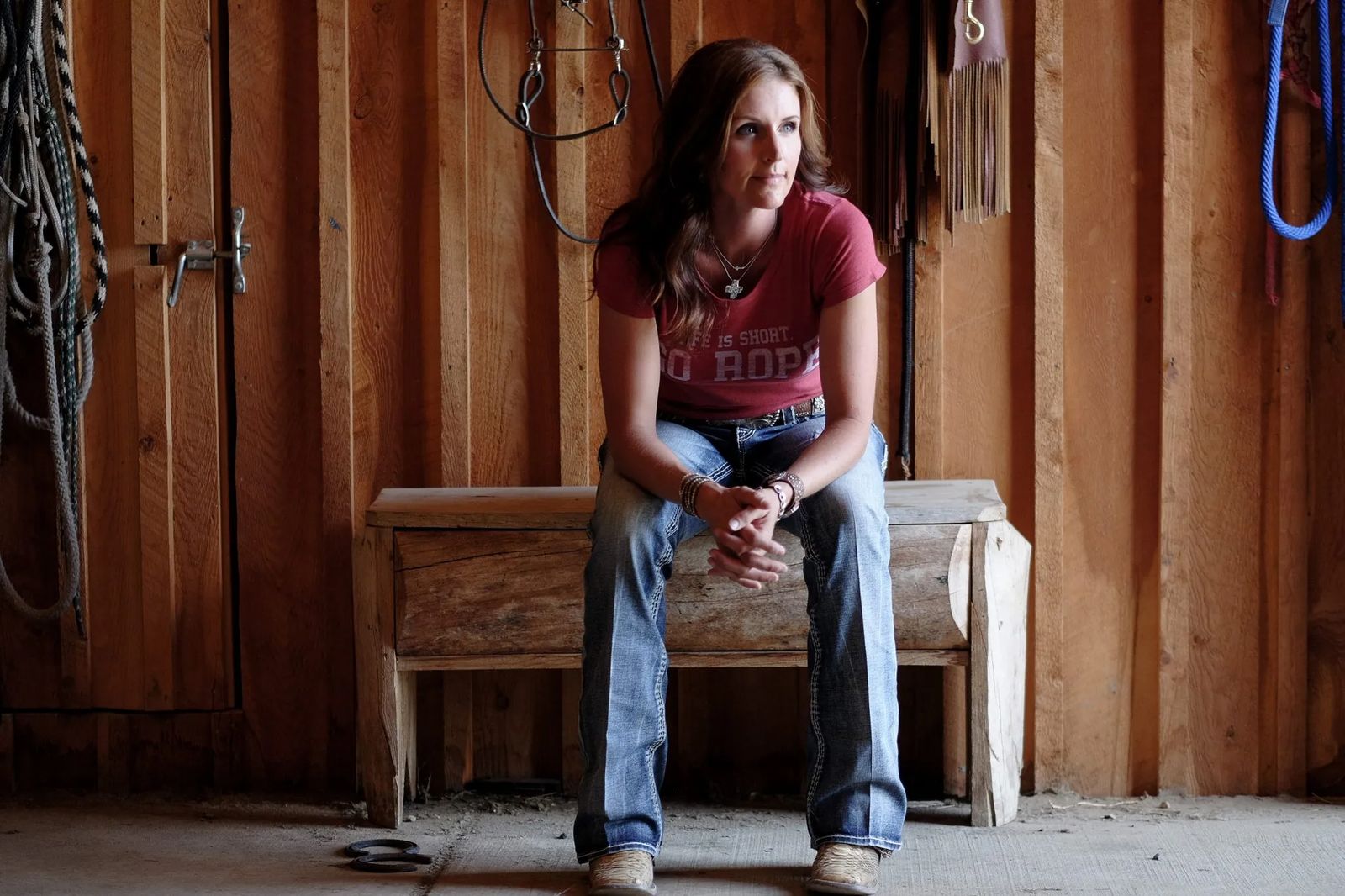 The seconds tick away. Team Roper Jenny Gilbert sits in the saddle trying to keep her nerves in check. Her Palomino ‘Money’ is all warmed up and raring to go for the latest event at the World Series of Team Roping in Las Vegas. Jenny already sized up the steer that she hopes to rope straight out of the chute. She knows with the beast’s smaller frame, she’ll have to break him down in the corner to give her team roping partner the best shot at grabbing his back legs. Adrenaline runs through the 37-year-old decorated team roper. As the team’s header, she’s already visualized throwing the loop over the steer’s horns. She takes another deep breath as the seconds tick away and she awaits her turn in the arena. The nod is given. The gate is thrust open and the next seven seconds deliver a fast-paced, adrenaline-packed event that could land Jenny with money, a silver buckle, a saddle or all of the above. To say it’s a thrill ride would be an understatement. 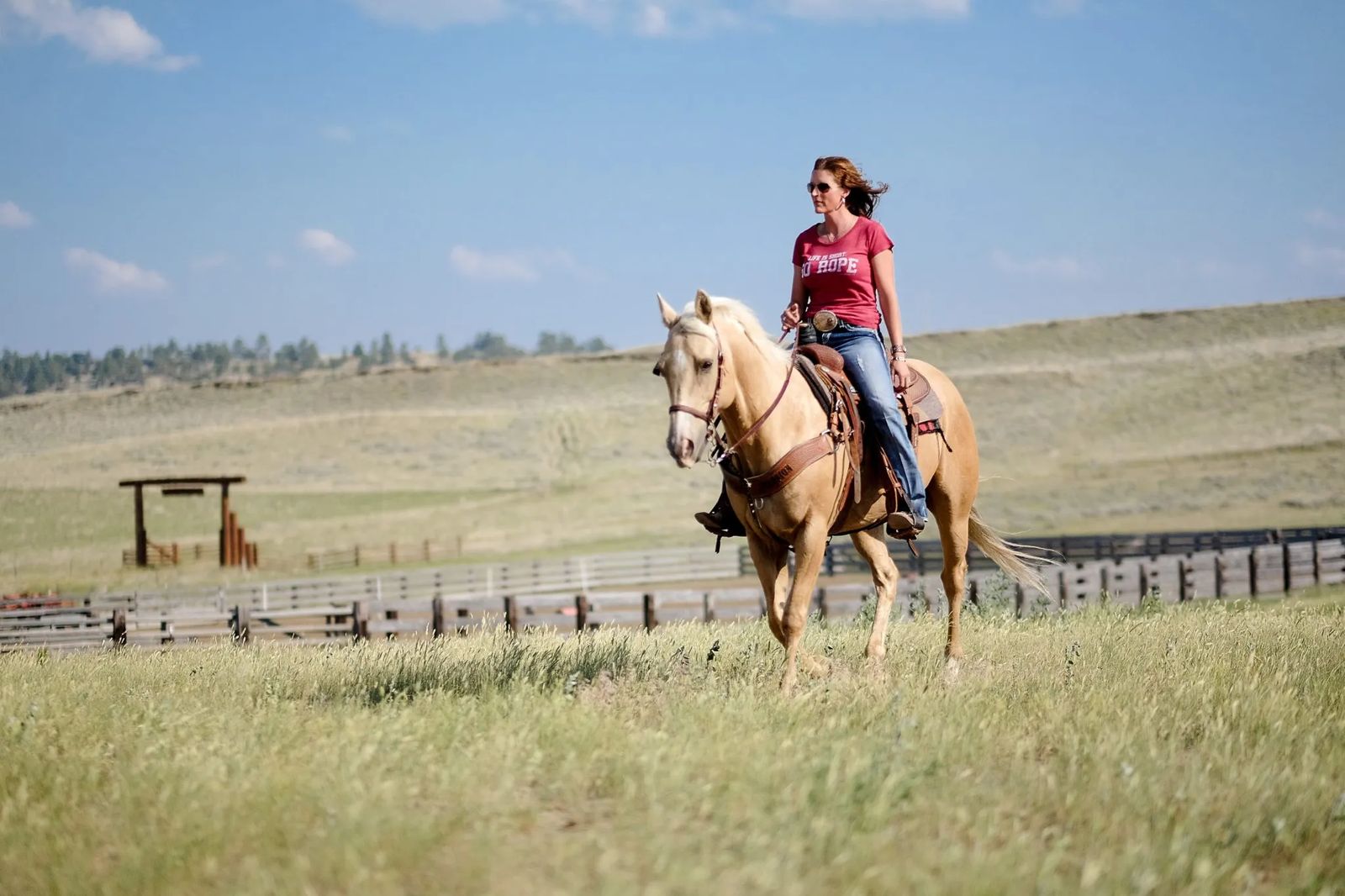 “When I get nervous, I always try to remind myself how blessed I am just for the opportunity to be competing in the sport I love,” Jenny says. “I tell myself that even if the run doesn't go as planned, I am so very blessed to be able to back my horse in the back of that box and give it my best.” 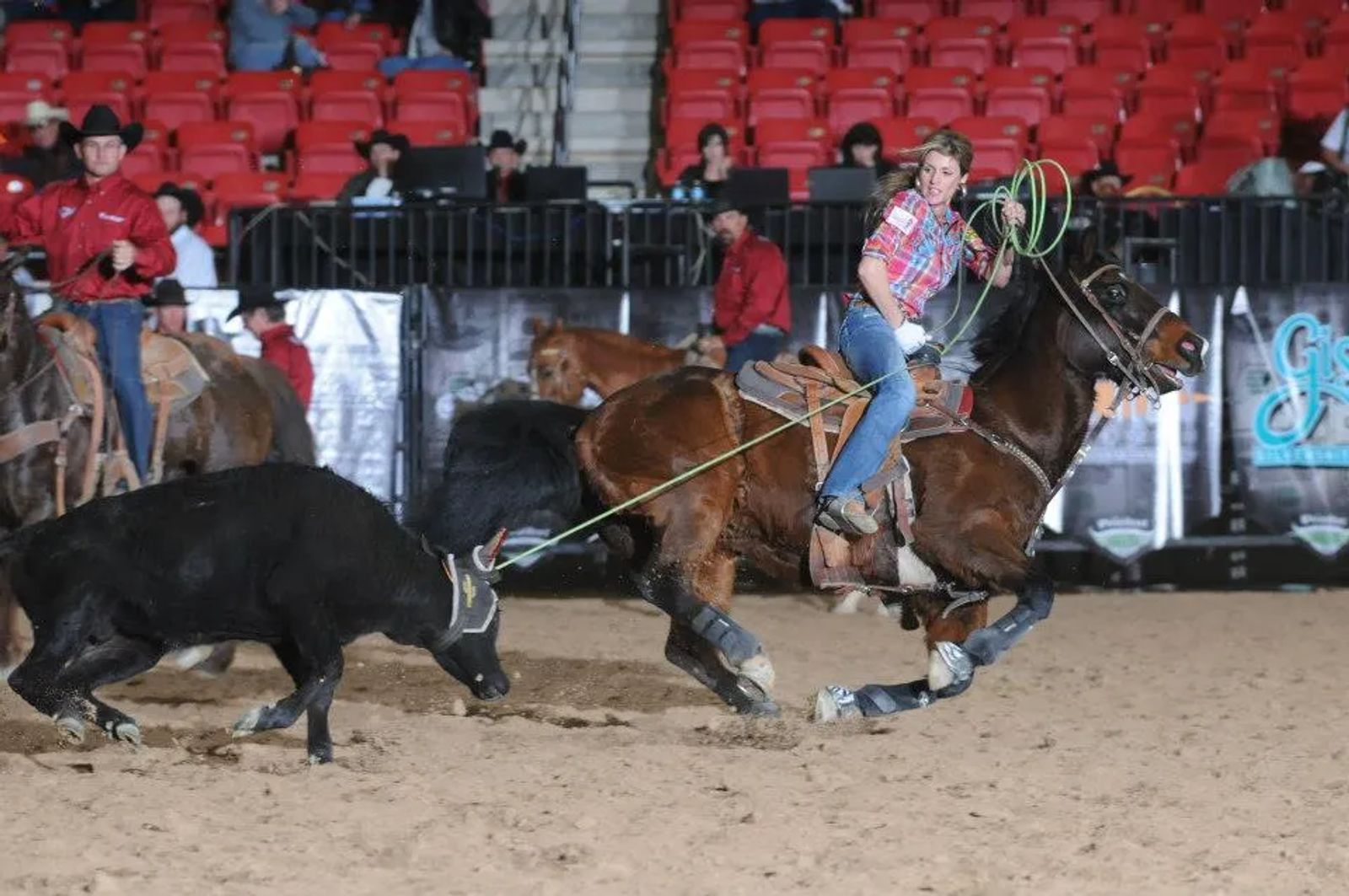 May 9, 2008 is a day that would forever change Jenny’s father, Don Proue. The then 58-year-old team roper had just entered the arena at the Billings Saddle Club for a team roping jackpot. It had started to lightly rain, so conditions were a little slick. Jenny says, “He headed a steer, roped the horns and when he did, the steer cut in front of his horse and the horse stumbled and did a somersault.” As the horse flipped, the first thing to hit the ground was Don’s head. When Jenny raced into the ring, “He was face down in the mud,” she says. Black rings already started to form a visual mask around his eyes from the bleeding on the brain. As he lay unconscious, his breathing was labored and the breaths sounded more like a gurgle.

“There were a couple guys holding a tarp over him to keep him dry,” Jenny continues. Dennis Tryan, the producer to the event jumped on his cell phone to call his two sons, Clay and Travis, both professional cowboys and National Finals Rodeo qualifiers, to start praying. With tears starting to form, Jenny says, “I remember overhearing him talk on his phone saying, ‘Travis, we’ve had a bad wreck up here with Don Proue, get a prayer chain started.’ That is such a testament to cowboys and the cowboy faith.”

While the prayers covered the crowd of family and friends that had gathered at the hospital, Jenny says, “The neurosurgeon told us that because of his age, he didn’t expect my dad to ever wake up from the coma.”

Three weeks later, Don Proue opened his eyes with his family around him. It was one sign that this tough cowboy was ready to beat the odds. “The doctors weren’t sure how much anoxic brain damage he had suffered from a lack of oxygen,” Jenny says. “It was a waiting game to see how much damage had been done. You take it day by day. You don’t have any other choice.”

For the next seven months, Don would call the hospital his home. The family would come to learn that healing a traumatic brain injury is a long and arduous process.

“You go through some pretty tough things that you truly thought you’d never have to deal with,” Jenny says. Her dad suffered mood swings, violent outbursts, even suicidal thoughts. “That’s just part of a brain injury. A person loses the ability to control those emotions. He had no filter to shut it down.” 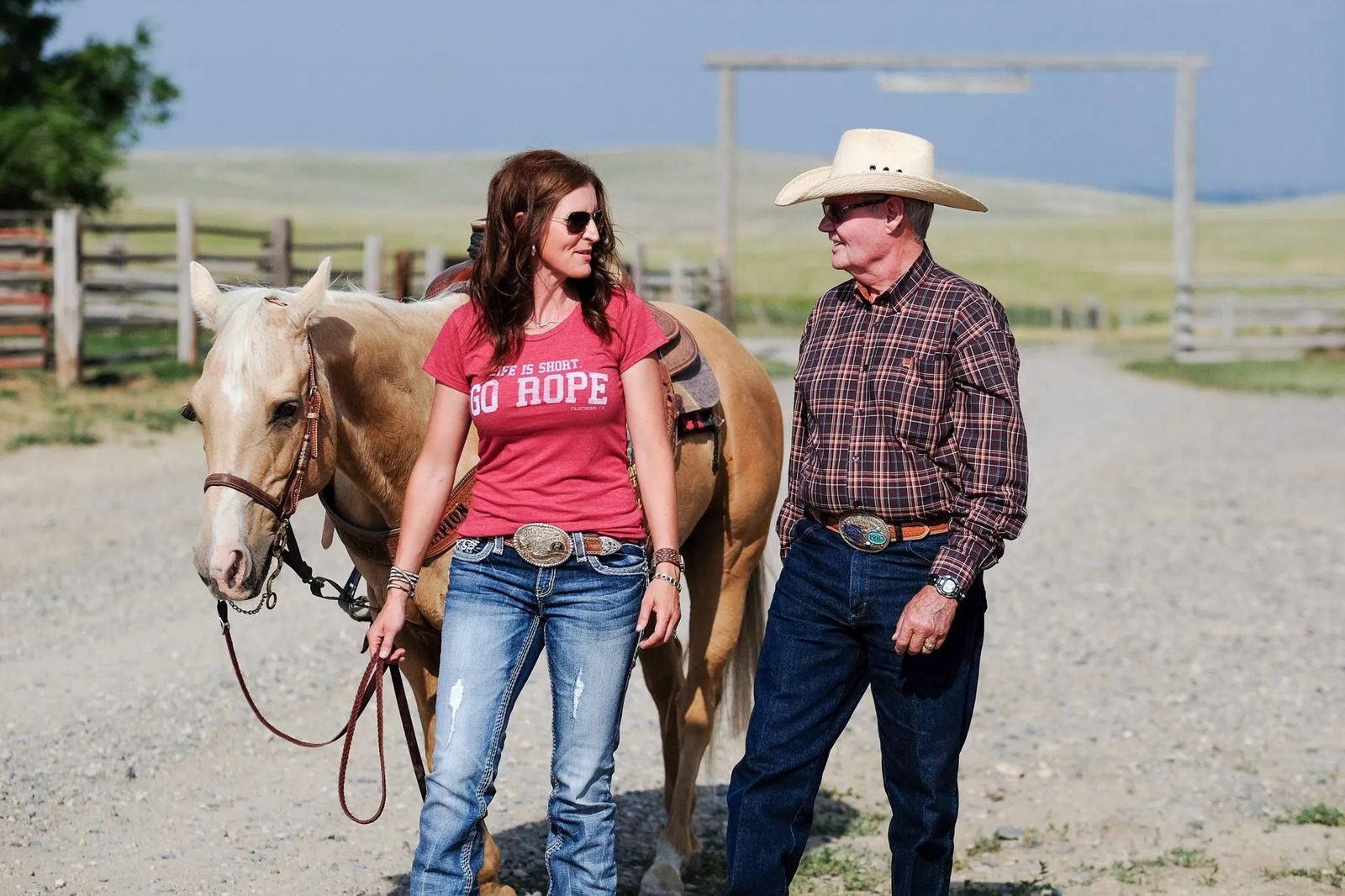 While her dad started recovery, Jenny found solace in the one passion that ended up stealing her father’s health and vitality. She and her husband, Denver, continued to tour the region to compete in different team roping events. It was during these competitions that a little voice in Jenny’s head started to urge her to use what her family endured to serve as a powerful message. Just last summer, Jenny opened the virtual doors to Go Rope, a clothing company established “to inspire ropers and horse lovers to live life boldly, doing what brings you joy.” Because there are risks in pretty much everything in life, Jenny will tell you that “God didn’t create us to be spectators.” So, in the words of the company’s motto, “Life is short. Go rope.”

Don Proue was the motivation behind all of it.

“This took shape in my mind about a year or two ago and it kept building and building.” As she watched her dad struggle to gain strength, “I thought about honoring dad and getting the company rolling. I wondered how to pursue it, where to take it.” Eventually, she says, her doubts started to fade. “Things fell into place and I felt like my kids were old enough that I could now devote some time to it.” Even though she studied business while on a rodeo scholarship at University of Montana Western, Jenny says, “It took me a while to convince myself that I had the qualifications to start a business.”

When the first box of merchandise arrived last October, “I thought I ordered what I considered a large order. I remember getting it, having the boxes in my living room and having a panic attack. One of my friends talked me off the ledge,” Jenny says with a smile. “I put a note up on my Facebook page and it was all gone within 24 hours.” 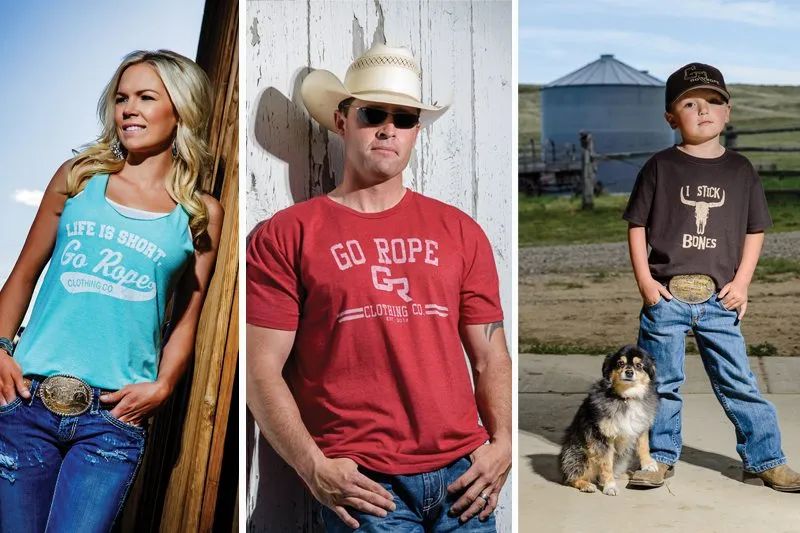 More merchandise went down to the trade show tied to the National Finals Rodeo in Las Vegas that December. As she worked the booth, Jenny saw the impact her little, Montana-based clothing shop was making. A man and his teenage daughter came into the booth and started reading a notecard sharing Don’s story and the motivation behind Go Rope. Jenny says, “When the man’s daughter read it, her hands started to shake. With tears in his eyes, he shared that they had just lost a teenage son three months before in a car accident who loved to rope. The man’s daughter was debating whether she could continue to rodeo without him.” Jenny’s story struck a nerve. “The man just said that it meant a lot to her and he had been trying to encourage her.” Stories like this one have landed in Jenny’s email “in box” from people all over the world. “That is, by far, the coolest part to me,” she says. While Go Rope stocks a mix of clothing for men, women and children plus a handful of accessories, every message she gets from customers and fans just proves that Go Rope is about more than just sweatshirts and tees.

Today, it seems not a day goes by without one more thought, or another idea on ways to expand Go Rope. “My note pad is full of just random thoughts. It has taken on a life of its own!” She smiles as she adds, “It has turned into a full time job. I have retailers all over that are wanting to carry Go Rope in their stores. There are three stores in Australia that are currently carrying it, two in Canada that want to carry it.” 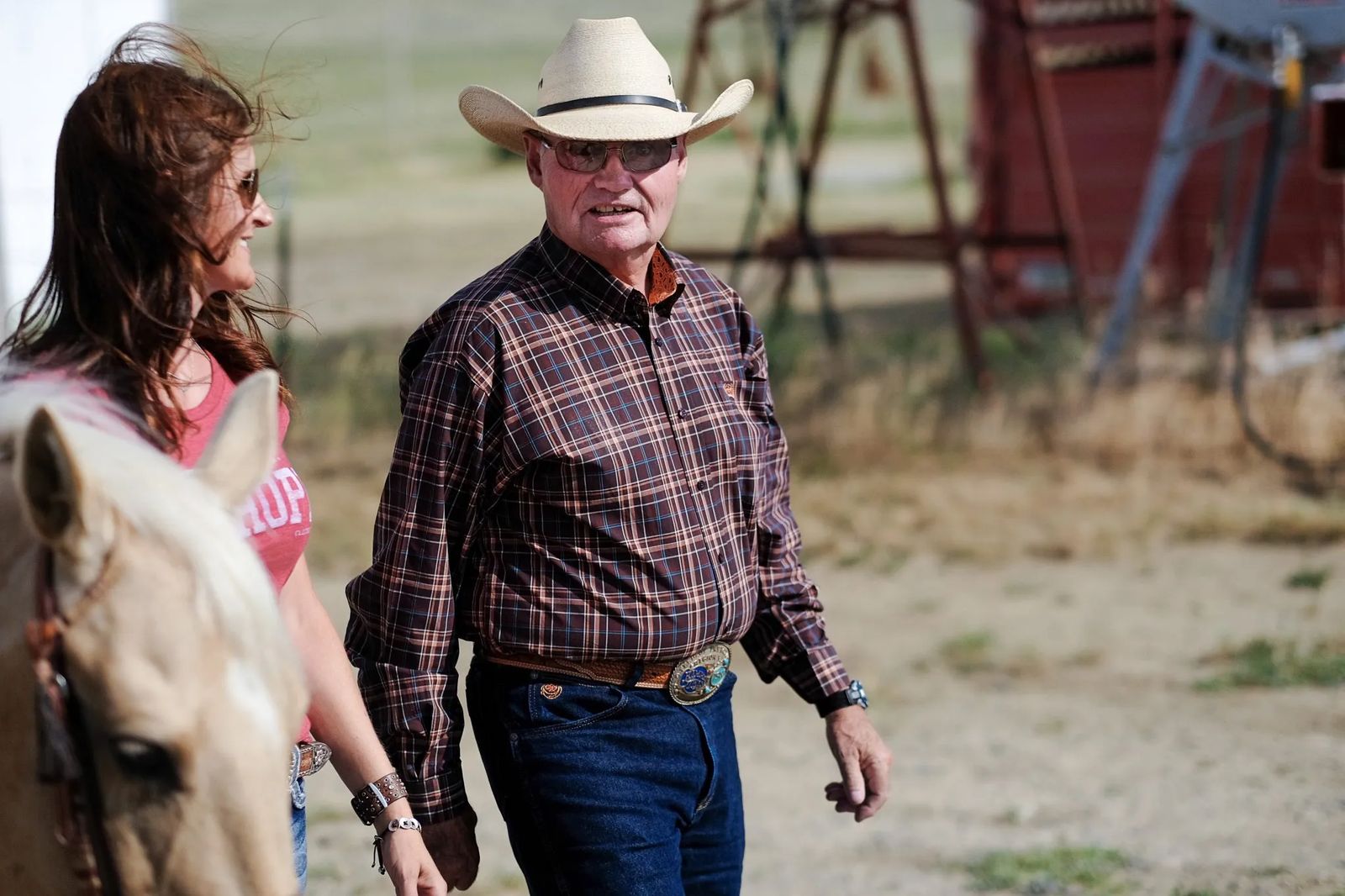 As the company grows, Don Proue continues his recovery more than seven years after that tragic ride. At times, Jenny will find her dad working to teach himself roping skills all over again with the help of a plastic, team roping practice steer. “Sadly, my father has never been able to compete again, and probably never will.” She adds that time has helped heal some of his internal wounds. “My dad is much better than they ever said he would be, but he is a far different person. You see glimpses at times of the man he used to be.”

With each passing day, she knows it is all the more reason to live life to its absolute fullest. She realizes not everyone has a love for riding and roping, but everyone does have something that fuels a love or a passion. She shares, “His story is a great reminder to never take our days here for granted.” Just as her company’s tag line reads, “Life is short. Go Rope.”

For more on Go Rope and a look at the full line of products, visit goropeclothing.com