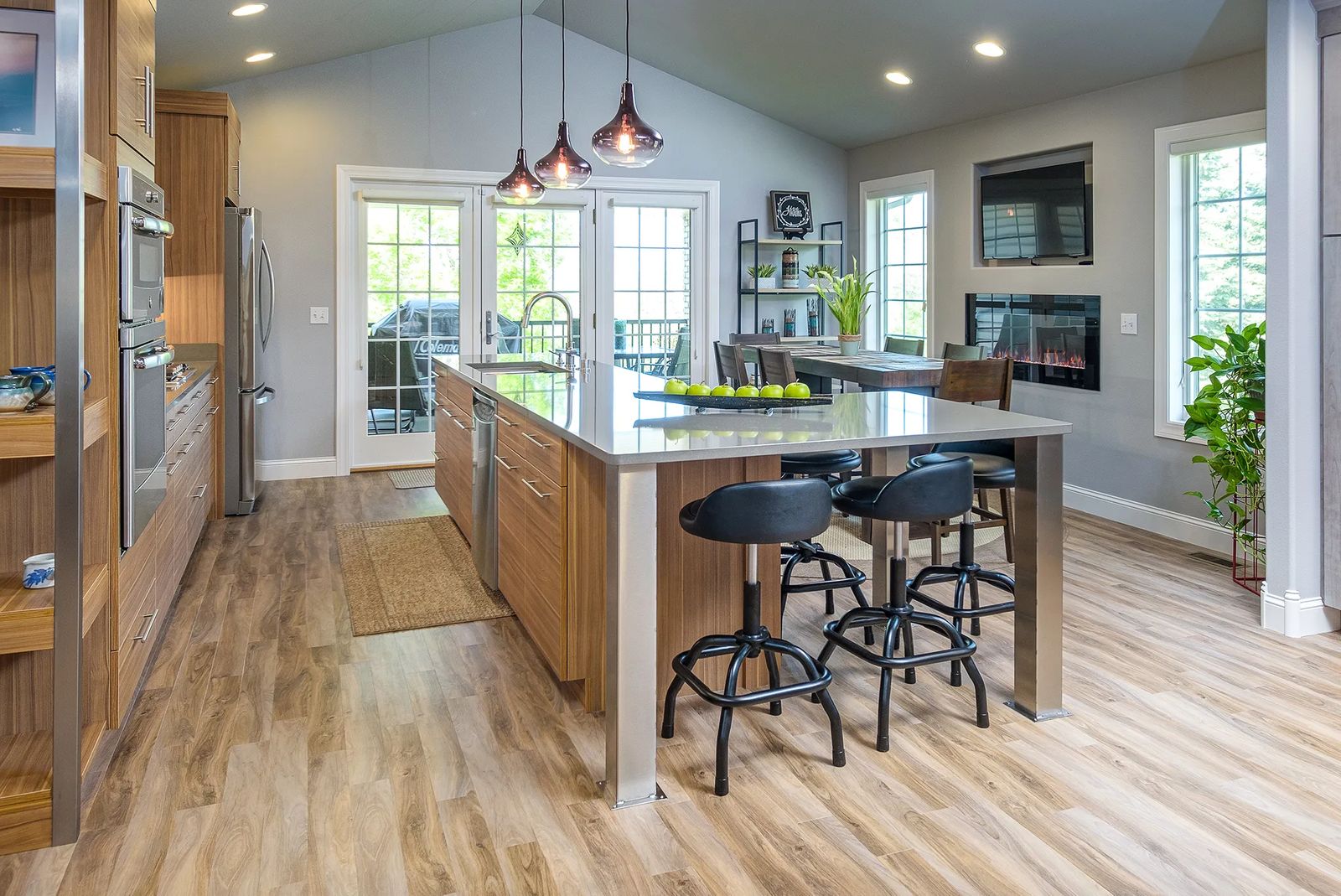 If you were to ask retired elementary school teacher Barb Dornfeld what she did on her birthday five years ago, she'd happily fill you in. It was the day she and her husband, Scott, first saw the Billings home they'd come to know and love. It also happened to be the day they signed on the dotted line, sealing the deal.

"I wanted to be back in Billings for all the things to do here and for the availability of the airport, as we like to travel," Barb says. "We'd been living in Sidney, where Scott retired from the music store." His retirement, much to Barb's delight, opened the door to relocate to the Magic City.

Meeting Billings Realtor Myles Egan, the couple ended up seeing a nice patio home nestled into Arbor Hills Drive in the heights. "We saw it, and signed papers on my birthday," says Barb, just as delighted now as she was then.

Three days later, she looked at Scott and said, "I'm done teaching." Her big announcement came after 41 years of educating first-, second- and third-graders in Billings, Huntley and Sidney schools. "Three months later, we had a garage sale and sold our house in Sidney at the garage sale! The oil boom was going on then."

The couple then settled comfortably into their two-level Arbor Hills home with Barb making minor changes over the first few years. It's like this art major says, "I'm always changing things." It didn't take long, though, before the major modification mode began nudging Barb to do something big and bold.

The Dornfeld Home Before the Renovation 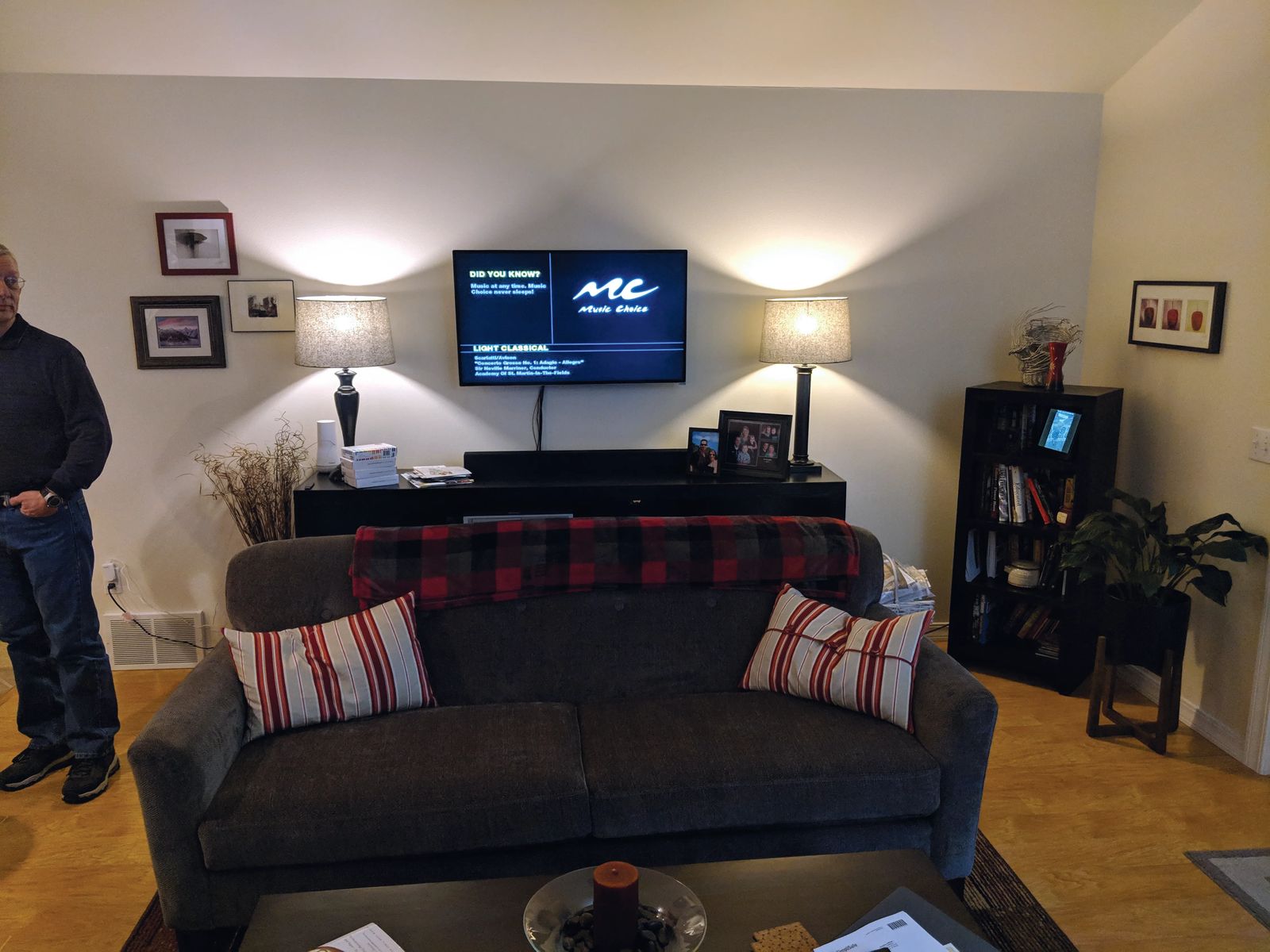 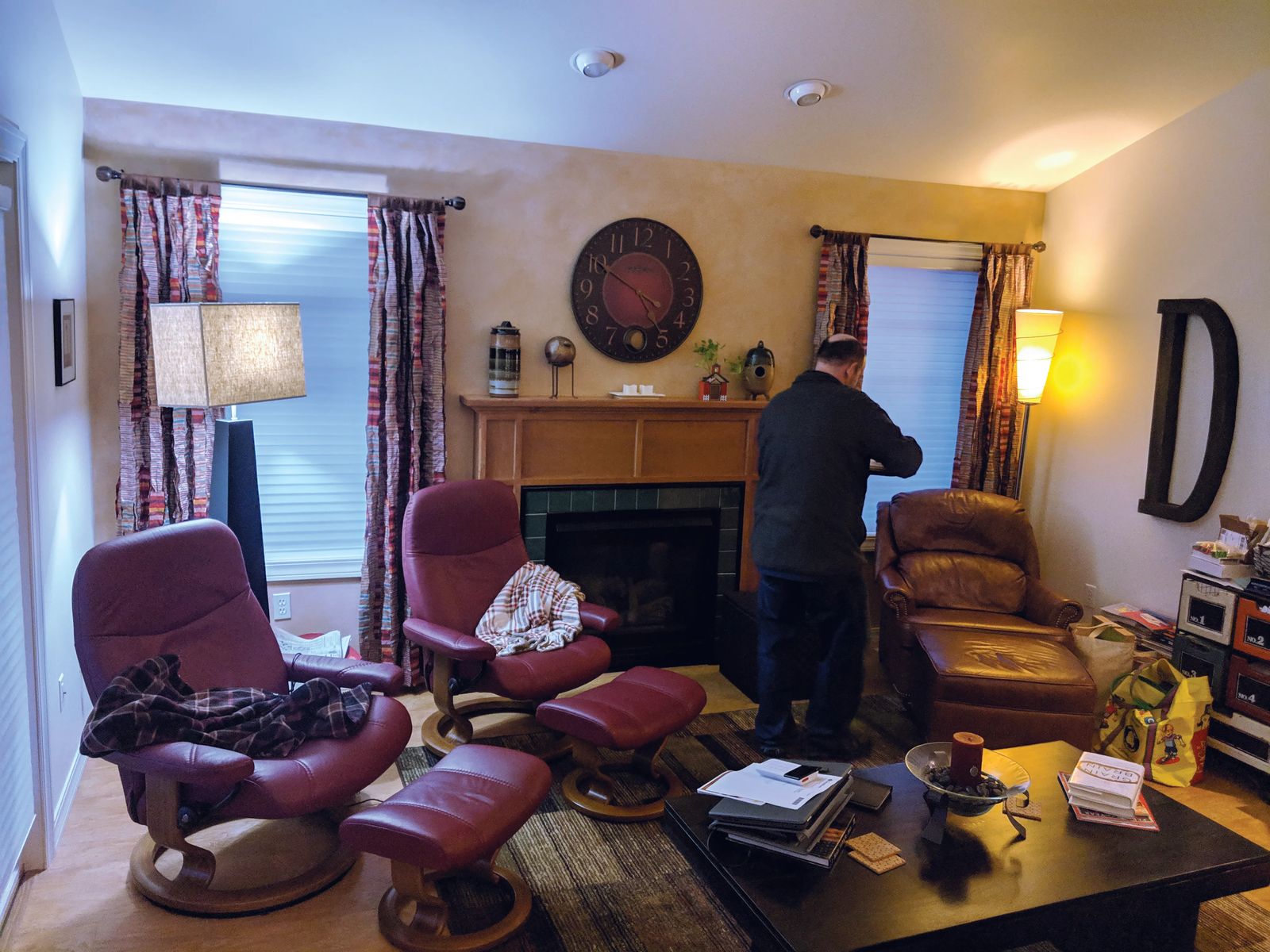 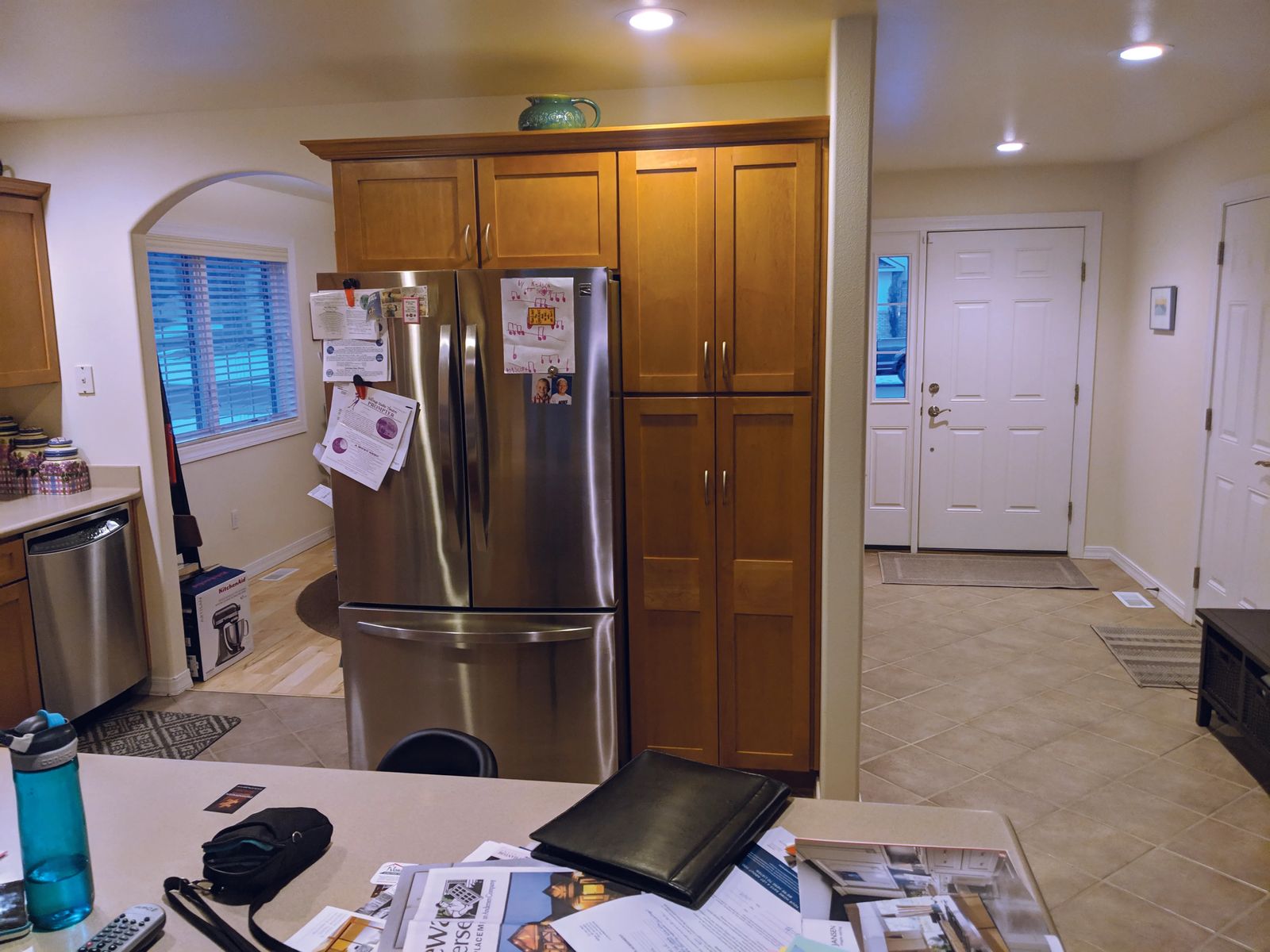 "I guess when I'd mention to friends that our kitchen was in the middle and our living room was at the end of the house off the deck, they'd tell me, 'then move.' I didn't want to move," she says. “We enjoy the close proximity of MetraPark and the downtown area, and, we love our neighborhood."

A move out of their beloved neighborhood and away from friends wasn't an option. That's when Jeremy Freyenhagen was invited to come over.

"You have to take charge," Barb says. "I did my homework for years and saw what Freyenhagen Construction could do. How they could move kitchens. We asked Jeremy if the kitchen could be moved and his answer was, 'Yes, we can do that.' So, just this January, I walked into Freyenhagen's office and said, 'I want to do this.'"

The transformation began with tearing down a wall separating the kitchen from the dining room. Today, it's open-concept living with the kitchen at the back of house.

"The kitchen now," says Jeremy, "was the living room. It had a TV on the wall, which is where the stove is now. There was a floor-level gas fireplace with mantle and now it's a linear electric fireplace placed flush on the southeast wall under the TV. It's sleek and contemporary looking. And, you can now go from the kitchen out to the back deck." 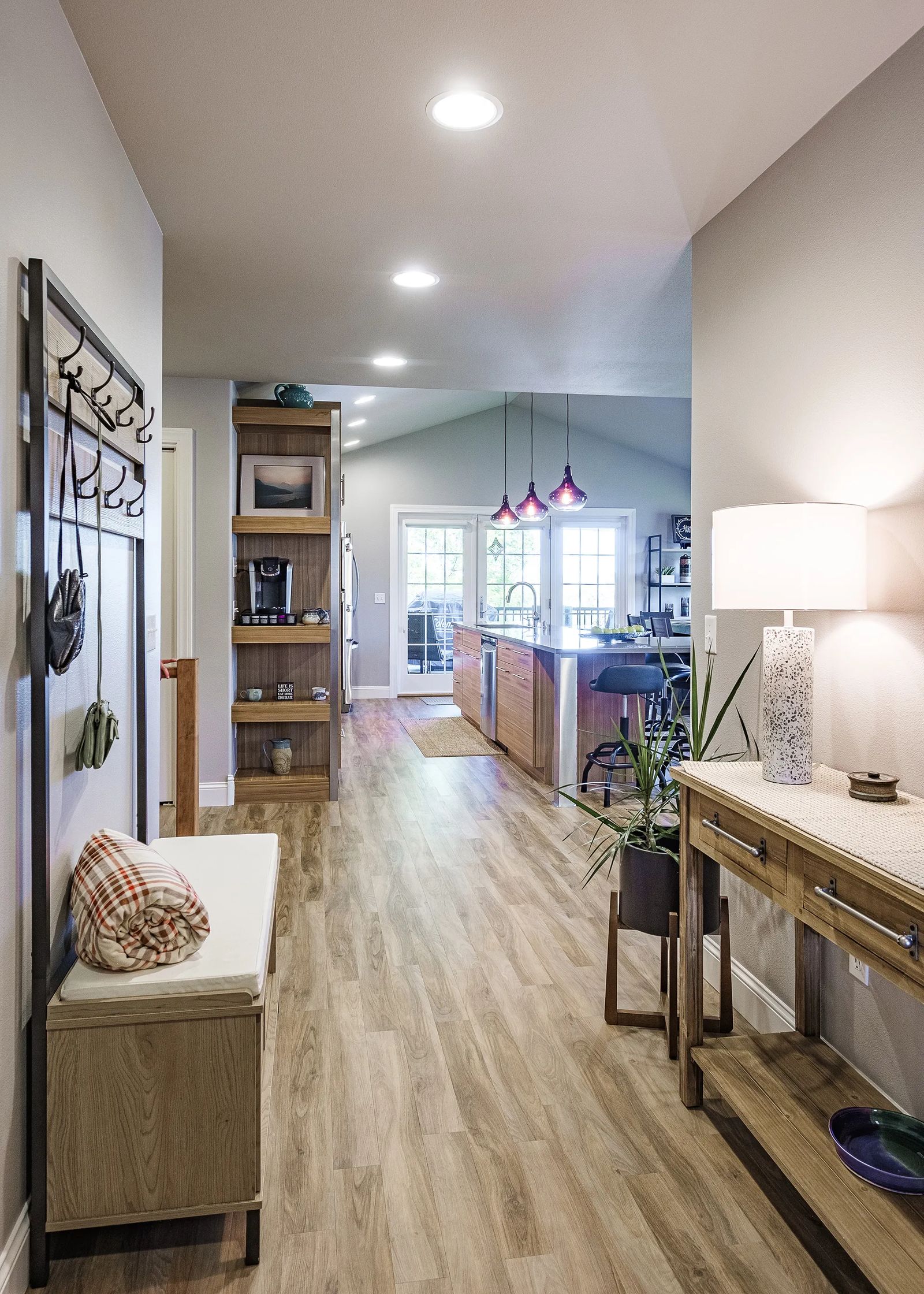 An archway near the front entry that led into the old kitchen was done away with, presenting  the new living room with a touch of privacy when someone's watching TV. Without the archway, the space now flows into the heart of the home.

"It's designed with a natural flow," says designer Angie Freyenhagan. "Barb knew exactly what she wanted. Entertaining is so much easier for her now. It's a great gathering place." 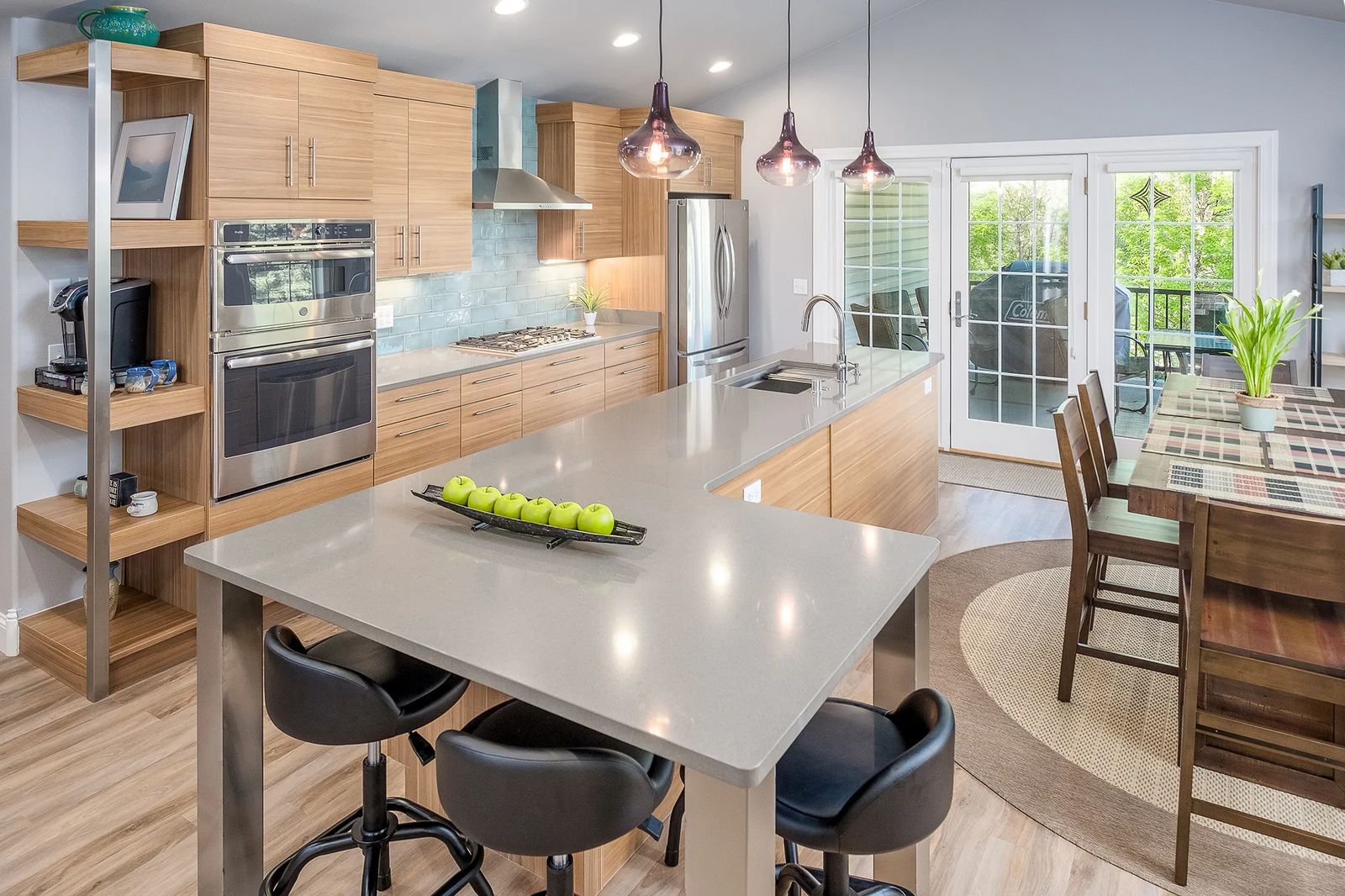 "Barb brought me a picture and we found what she wanted," Angie says. "The horizontal wood grain stretches it out," adds Barb, referring to the lengthiness of the wall of cabinets.

Stainless shelving on one end adds a decorative element to the cabinet wall. "When coming in the front door," Jeremy says, "this is a focal point, not just a cabinet door." The shelving adds sophistication and gives Barb and Scott easy access to the Keurig coffee machine while keeping it off the countertops. 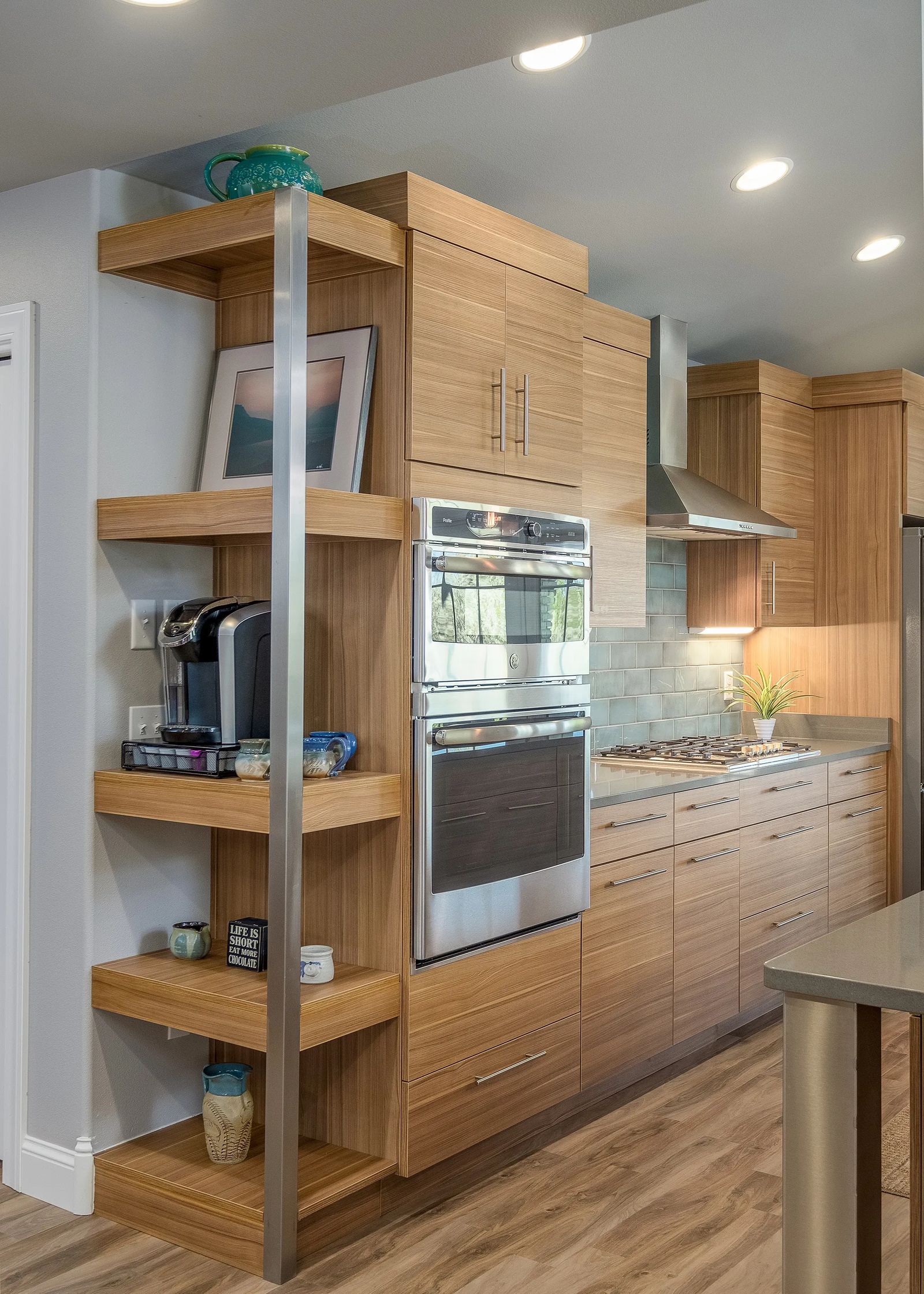 The center island sports a 13-foot Cambria quartz top with eased edge. Its gray color mimics concrete. "The gray is cool enough to pull the warm brown tones in the cabinets. The gray also pulls in the gray in the warm luxury vinyl flooring," Angie says. "It's a perfect neutral."

Barb describes the calming sea color of the backsplash: "We picked the cabinets first and then went to a cooler tone backsplash — a ceramic blue. I was a potter, so I collect ceramics. The backsplash has that pottery feel but it's not country." 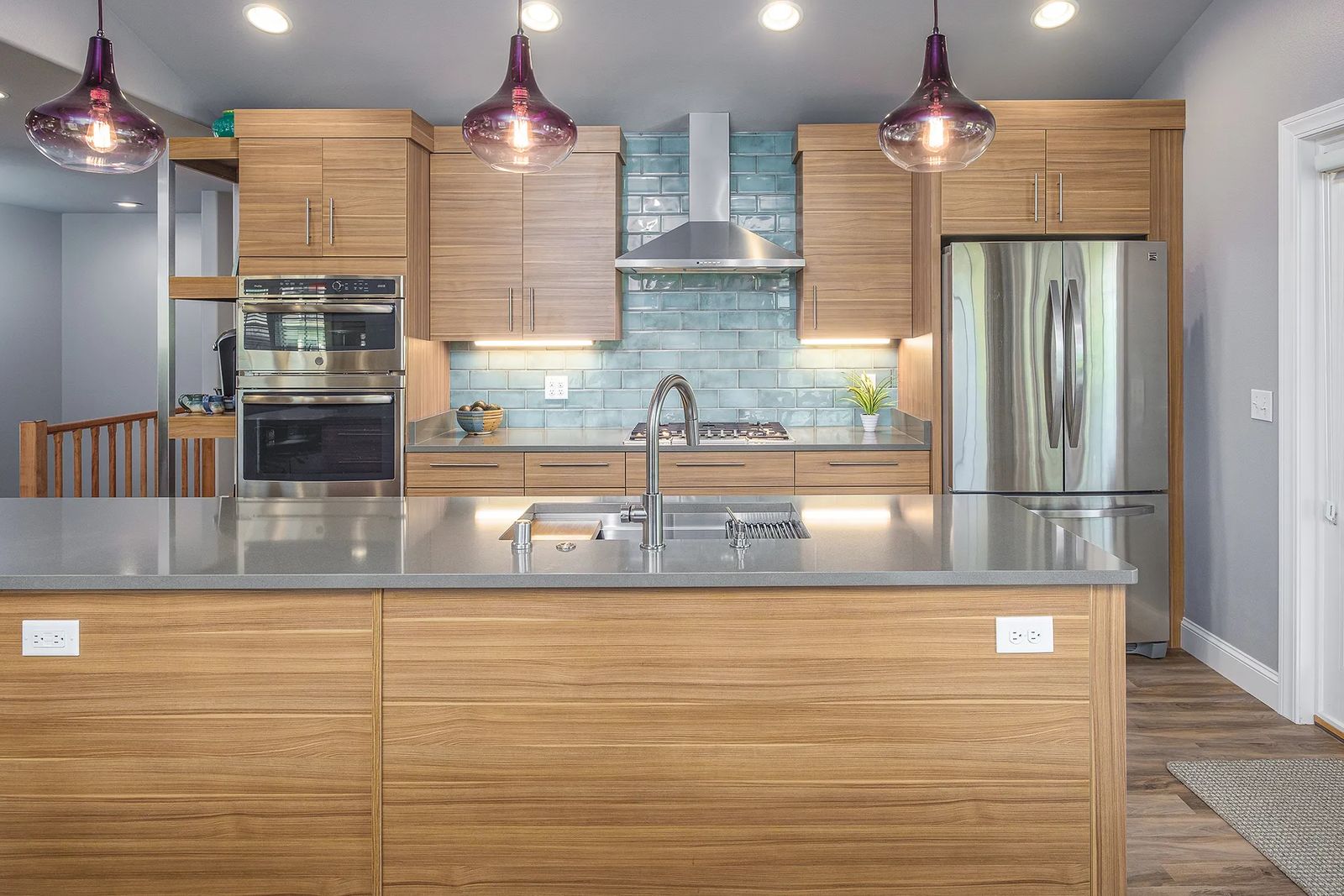 Working together to put all the exquisite touches on this design, Barb and Angie picked three smoke-colored glass globes to hang over the extended island. There's lots of prep space on this long bar top, including the sink area. Barb lingers over the large recessed stainless steel sink from the Water Closet as she demonstrates the sink's built-in cutting board and colander.

It's clear how much this homeowner enjoys the recent remodel. There's plenty of space to cook for the couple's six grandchildren and recent great-grandchild. There's a chair for everyone as the table seats eight and the island features a bump-out at the end, increasing the seating by four. "It's a unique design," Jeremy says. 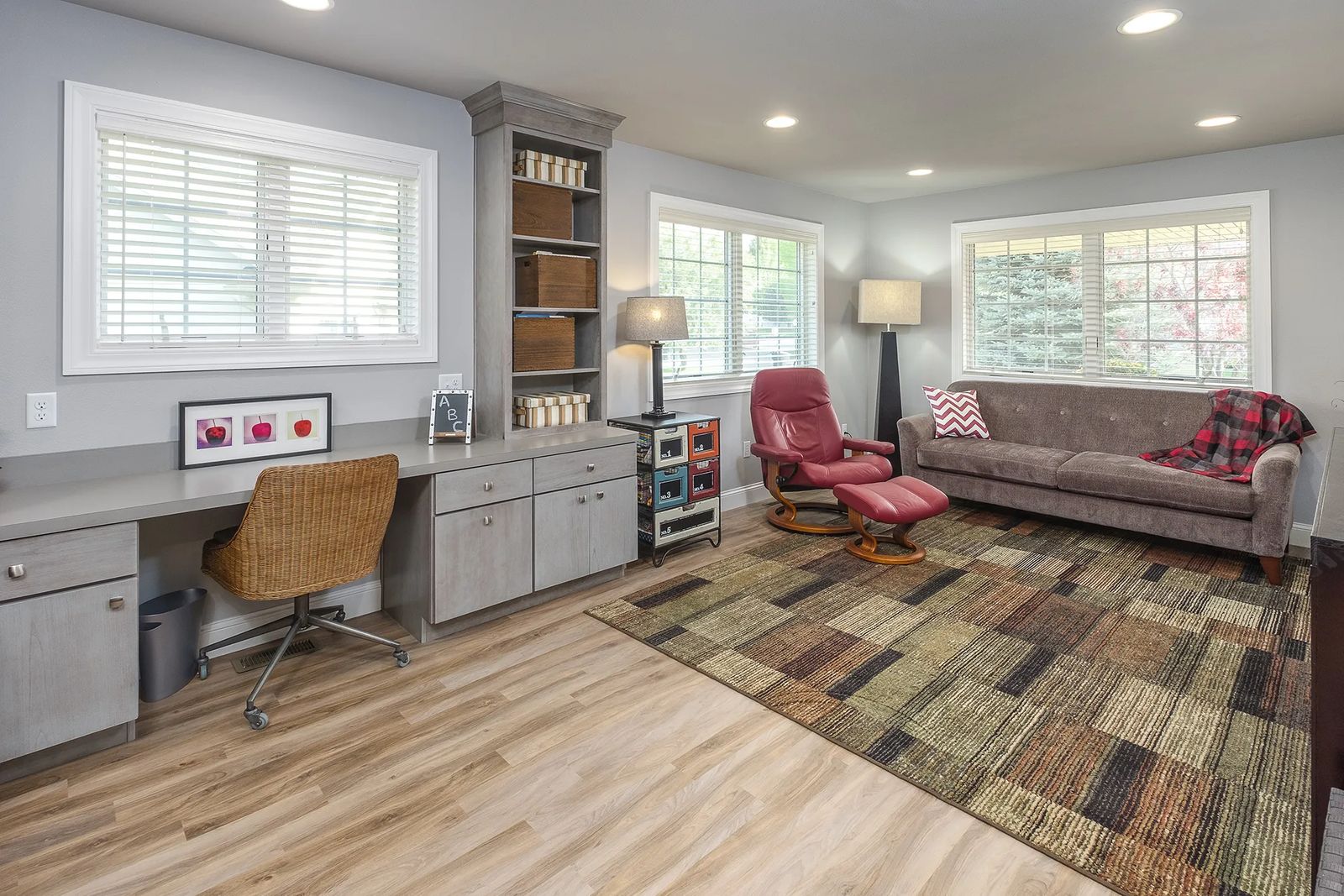 Furthering the uniqueness of this contemporary renovation, a built-in office space with Medallion peppercorn-colored cabinets takes up minimal room. It's perfectly tucked in on the living room side, providing Barb the ideal place to prepare her class work. Even though she's retired from teaching, she continues tutoring dyslexic kids.

Evidently, once a teacher, always a teacher. Barb tells the story of Mr. Plum Bean, quoting from one of her favorite books she used to read to her school kids. It gets to the very essence of what motivates Barb to be “always changing things” and why she so desired this modern update to her home.

"In the book, ‘The Big Orange Splot,’ a seagull dropped a bucket of orange paint on a guy's roof. On Mr. Plum Bean's roof. His neighbors said, 'You must take care of your house.'" 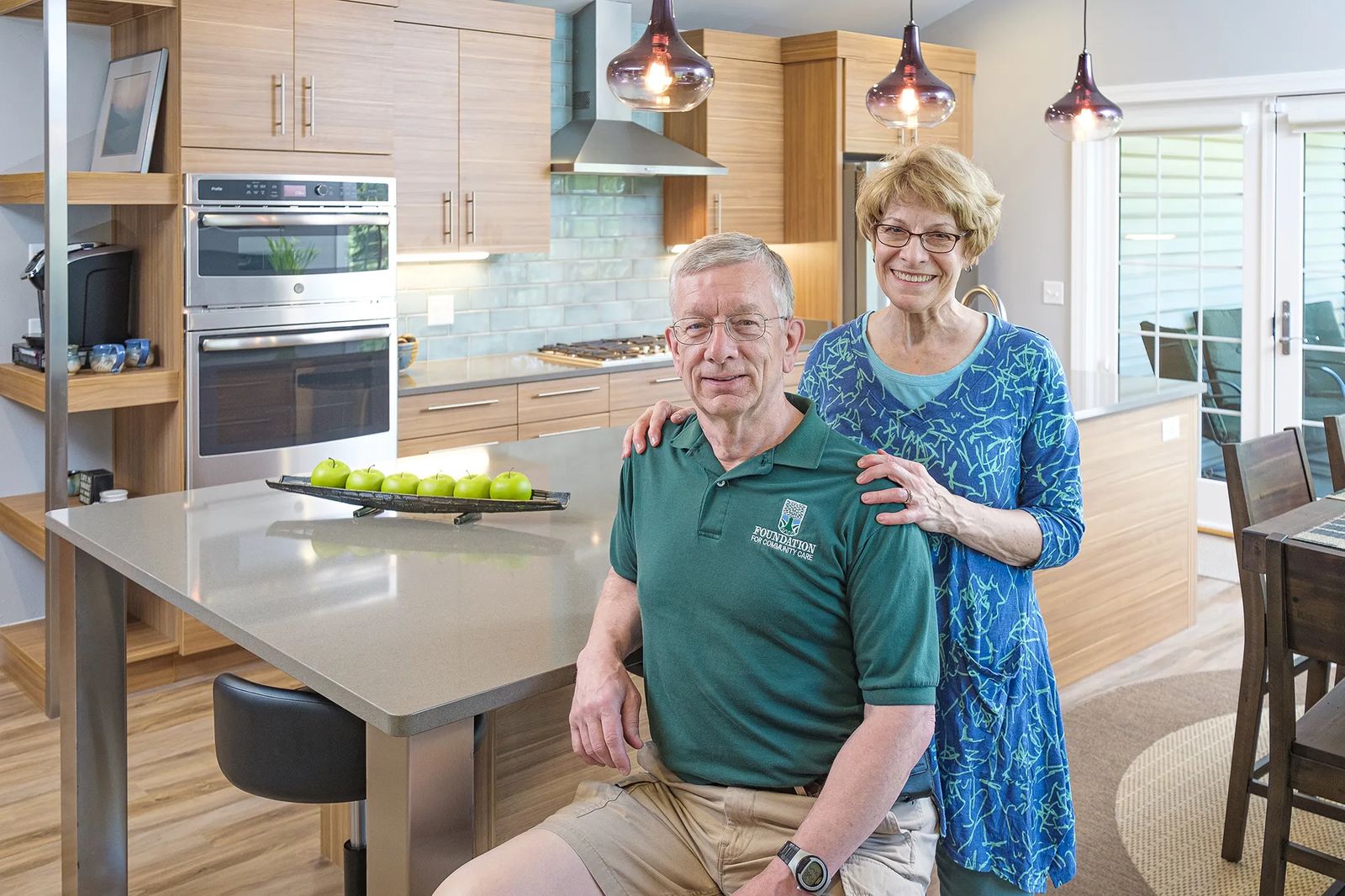 As Barb recites this wonderful children's story, the moral to the story is that one must persist in taking care of his or her home. The best quote from the book Barb loves to incorporate into her own life as a homeowner is, "My house is me and I am it and it looks like all my dreams."

"We've taken it from a '90s yellow oak to modern," Angie says. "It was not laid out in a functional way and now it's a remodel that looks seamless."

Barb couldn't be happier with the entire re-do. "It's exactly what I wanted," she says. "My house is me and I am it and it looks like all my dreams."