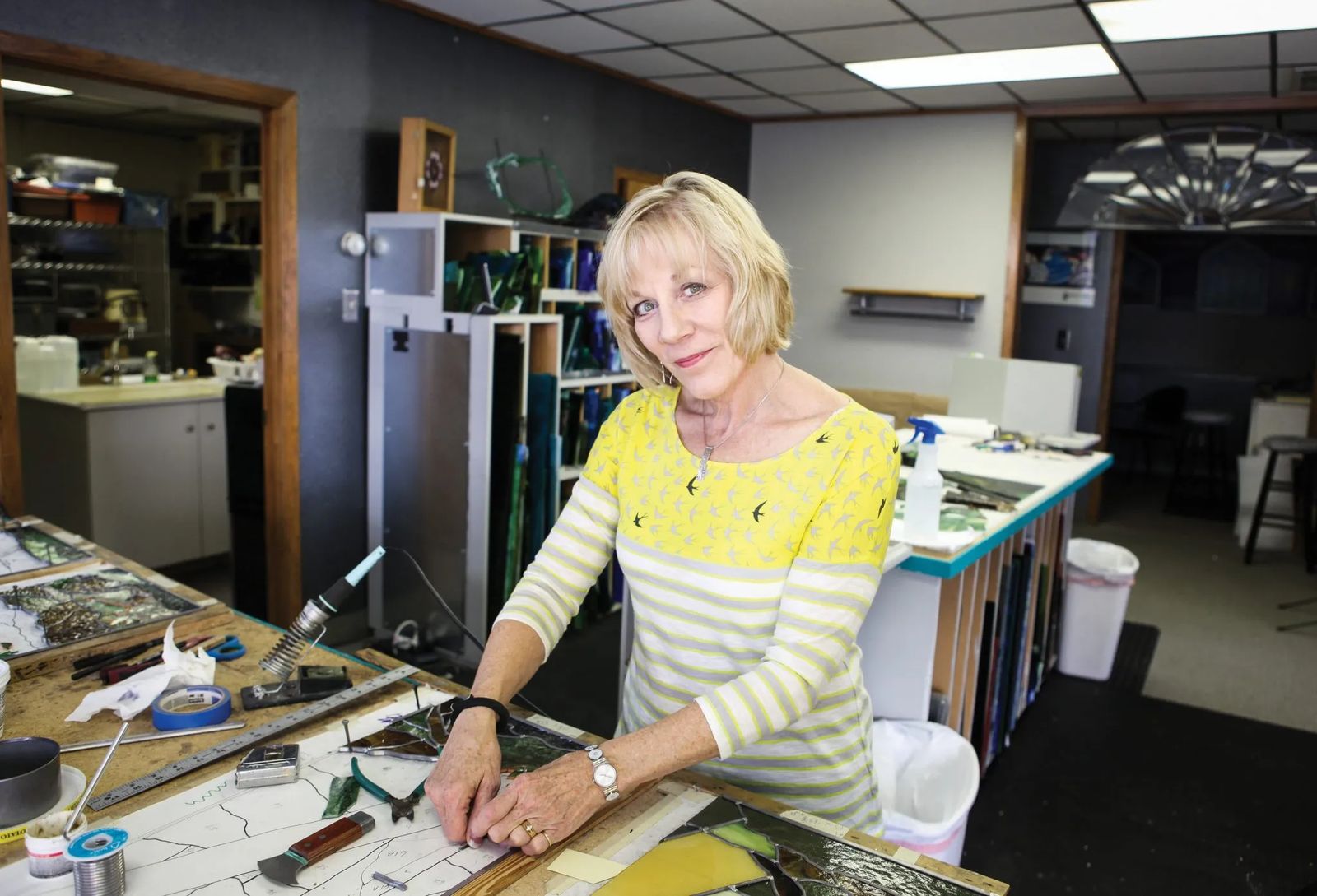 Susan Kennedy Sommerfeld stands at the edge of a pew inside Billings’ Mount Olive Church. She is dwarfed by one of her favorite creations which stretches behind her, 11-feet tall. The sunlight streams through the colorful panels, illuminating her face in earthy yellows, browns and greens. The stained glass was hand-picked by Sommerfeld herself. For every curvature in her depiction of the Crucifixion of Christ, she hunted for a piece of glass to match it. Forest green for the flower leaves, sienna brown for the cave and crystal blue for the clear blue sky. Between conferences with church officials, designing, cutting and soldering, the entire project consumed nearly 180 hours — typical, she says of a piece of such magnitude.

She speaks about her work with the causal self-deprecation of a true artist — confident in her talent, but not braggadocios. It is clear upon first-meeting, however, that her craft is more than a means to an end — stained glass is her passion, her medium of self-expression.

Sommerfeld has operated a studio in Billings for the past 34 years and does most of her work on a commission basis — specially designing pieces for homes or churches. She also takes on restoration projects, bringing new life to old glass.

Her beginning in the field was a simple one — and it started with her mother.

THE BIRTH OF AN ARTIST 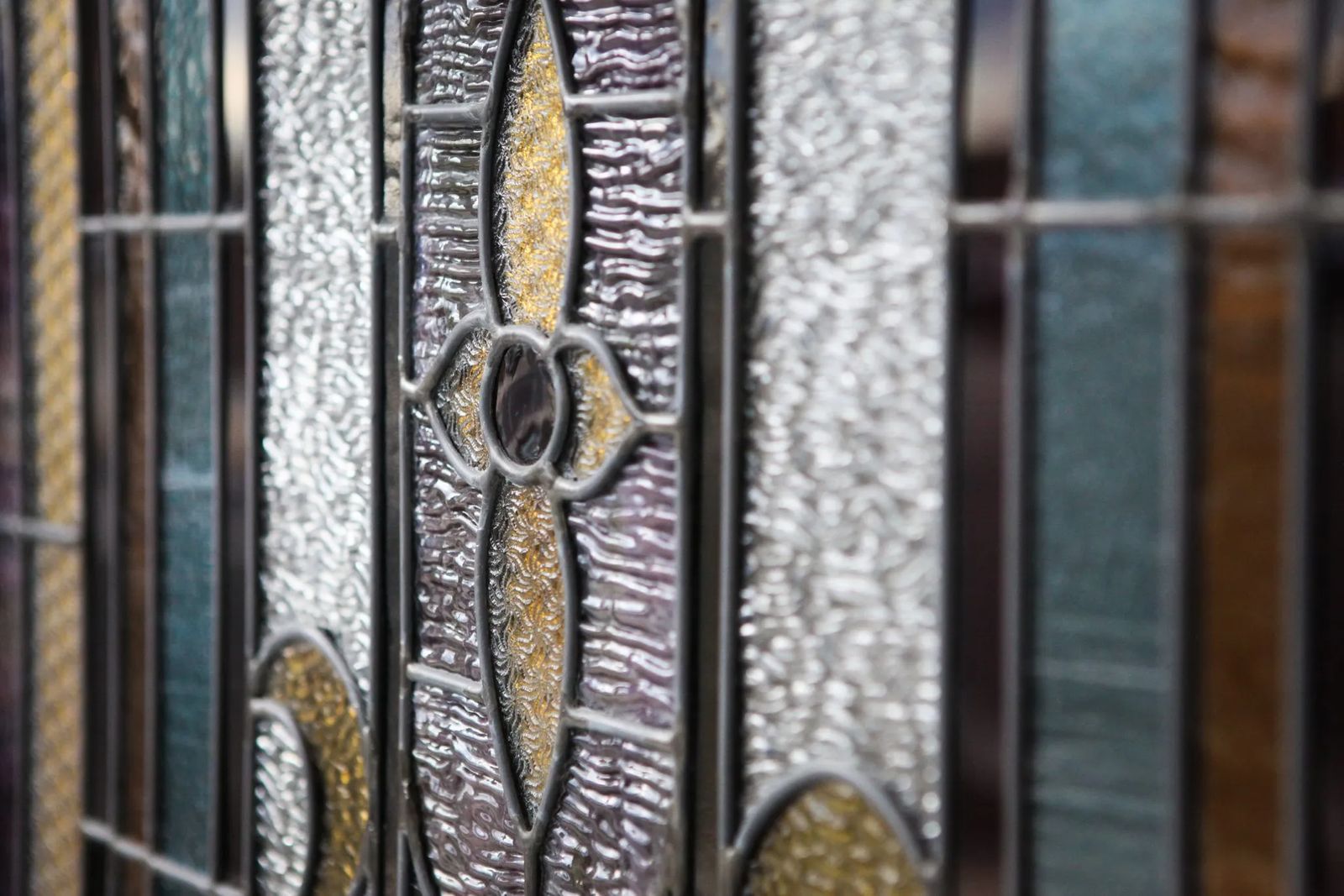 Sommerfeld’s foray into stained glass began in her early 20s.  Her mother, Alice Kennedy, a retired teacher, had finally found the time to pursue her interest in stained glass. But after taking a couple courses, she still wasn’t satisfied with the techniques she was learning.

“So, she went from studio to studio until she saw the most beautiful work and went in and said, ‘I want to study with you’ and she did,” Sommerfeld says.

From then on, Alice Kennedy was hooked.

When Sommerfeld returned home from Los Angeles one Easter, her mother invited her to an art show. During lulls in the event, Kennedy would lay out tools and pieces of glass on a table, and teach her daughter the art of stained glass.

While Sommerfeld returned to the coast, bringing her newfound love for stained glass with her, fate would eventually lead her back home to Montana.

In 1981, she laid down roots in Billings and opened her studio doors. It was a leap for a young woman with a bachelor’s degree in musical theater, but singing and acting wouldn’t pay the bills under the big sky.

Sommerfeld paid her dues in her early career, specializing in retail sales of glass and supplies, along with teaching classes. After 15 years, Sommerfeld had built a base of patrons, one that was wide enough to support a commission studio. 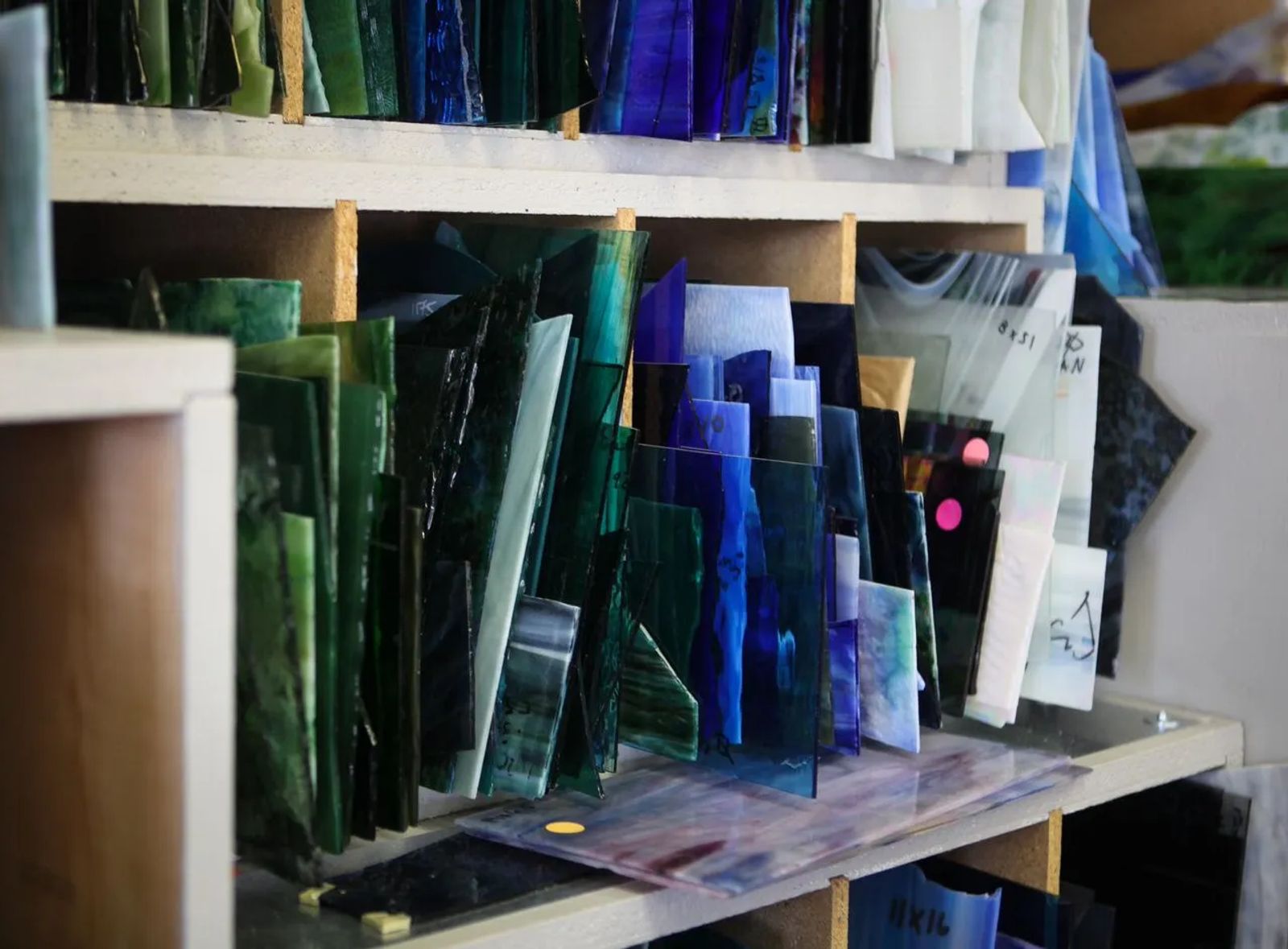 Each piece of stained glass begins with a client. Sommerfeld meets with them a number of times to hash out details, and to observe the architecture surrounding the proposed location. Then comes the design phase. She uses a computer program to make the initial sketch and then produces a full-scale paper print out for further fine-tuning. Once the drawing is perfected, Sommerfeld begins looking through individual panes of glass to find the perfect color and texture for each cut.

“I spend a lot of time laying my glass out because I want this particular look and it might be in the middle of the sheet,” she says. “It’s sort of like painting with glass.”

Sommerfeld uses double-stick tape to adhere the paper pattern to the glass she wants to use. Then, she takes a carbide cutter, traces the pattern, and pulls the glass apart.

Once the cutting is complete, Sommerfeld forms strips of lead or copper around the glass, soldering the edges to connect the pieces together. She primarily uses copper and lead, but artists can use any material that is able to be soldered, materials such as zinc, brass or galvanized steel. Copper, being both thinner and stronger, is often utilized for intricate work so the smaller pieces of glass don’t get lost. 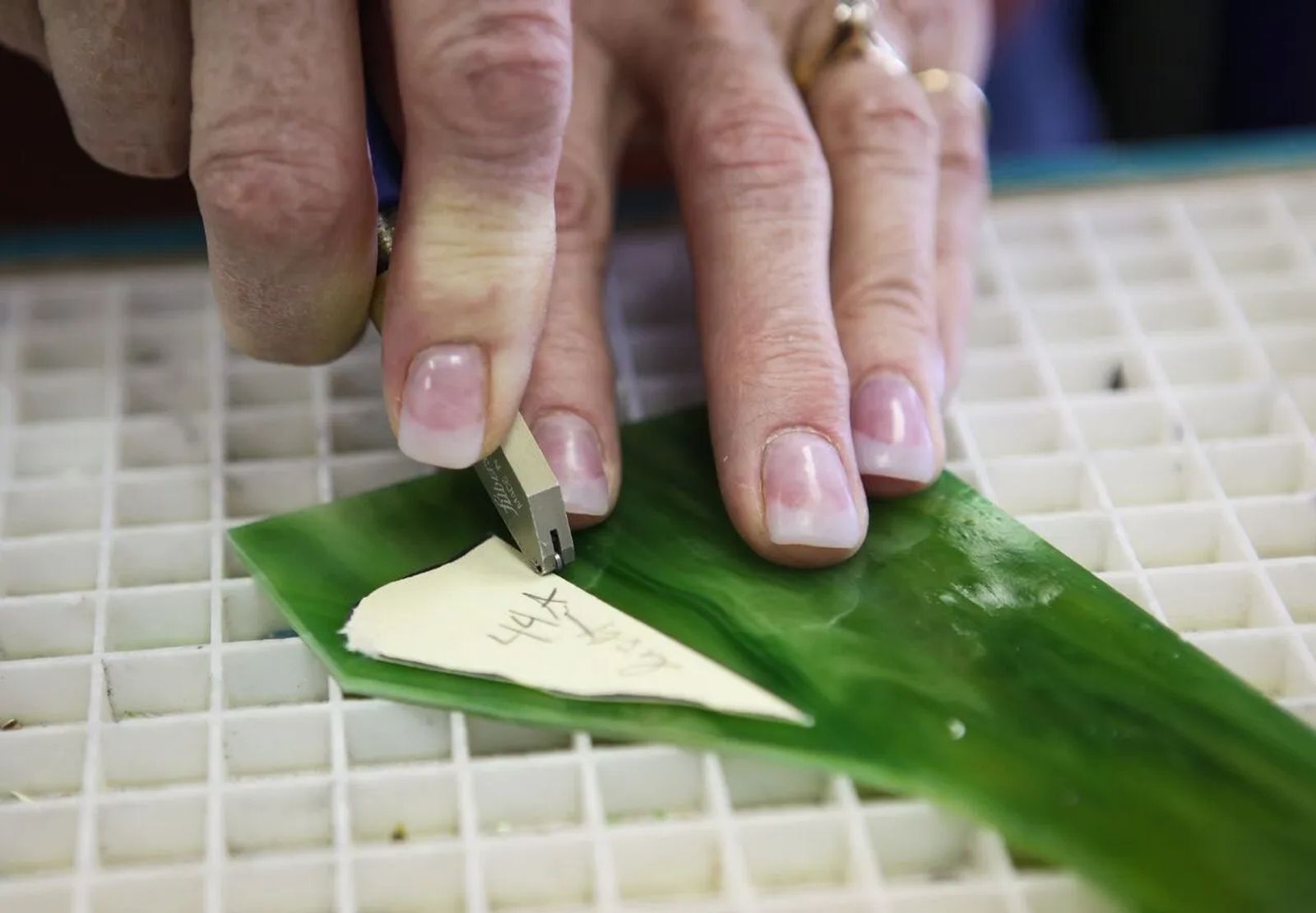 Between the lead and glass she places a special putty to cushion the glass and give it some flexibility.

“It allows the glass to expand, and contract and move when the doors open on a church or (if) it’s a new building and still moving,” Sommerfeld says. “The stress then will go into that lead and the putty we put underneath instead of into the glass.”

Sommerfeld reaches out to wholesale distributors around the world to purchase just the right kind of glass for her projects. 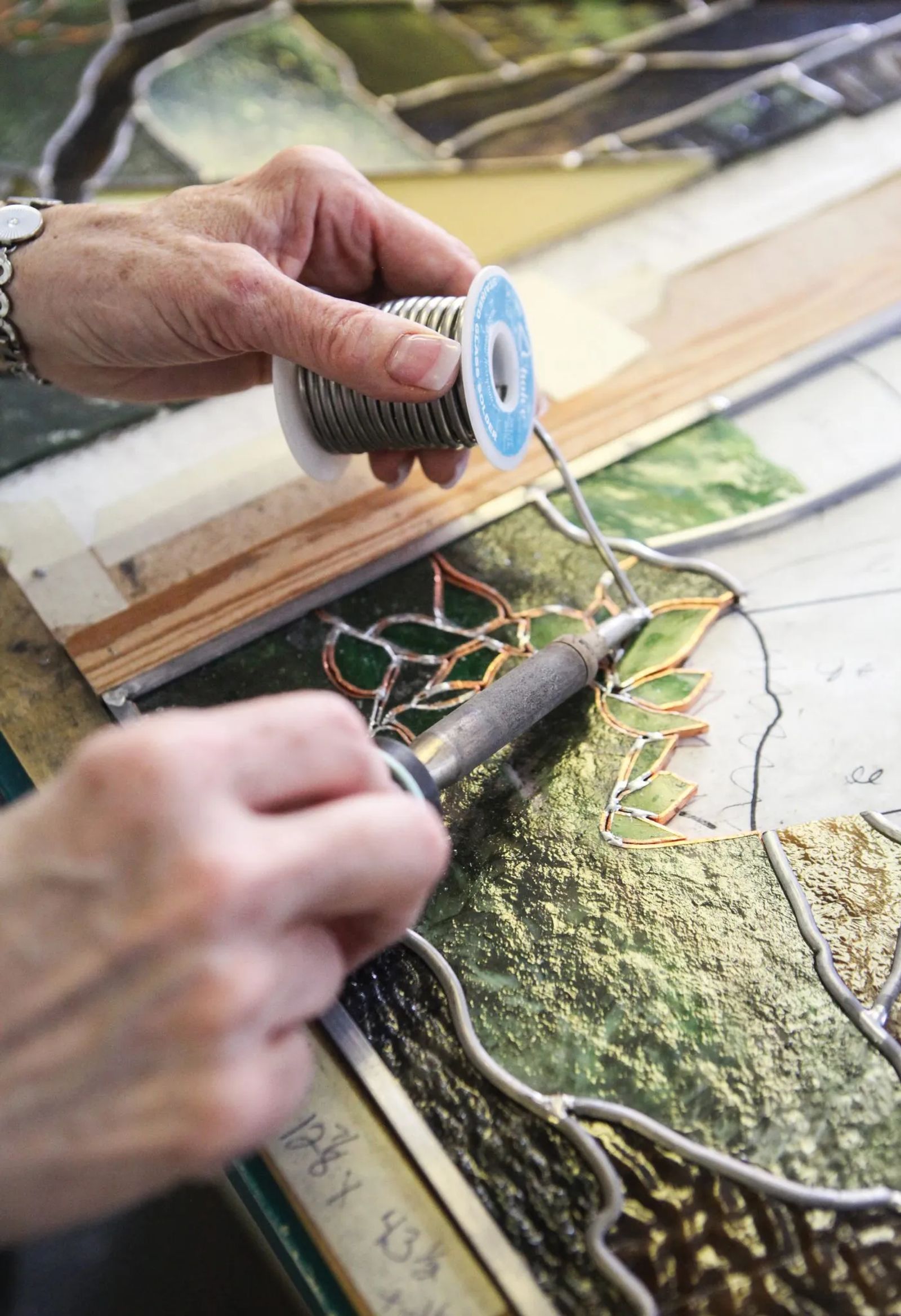 “The glass comes from all over the world — I have glass in here from Germany, France and Belgium. Then, in the U.S., we have manufacturers in Indiana, in Washington, in Oregon — all over the place,” Sommerfeld says.

If she can’t find the particular hue or style she’s searching for in ready-made glass, Sommerfeld will custom-order a sheet from a glass blower.

The cost of glass ranges widely, she says — anywhere from $25 on the low end to upwards of $150 for blown glass sheets. But it’s worth the price for Sommerfeld. Her windows and restorations will decorate churches and homes for up to a century before any repairs are needed. And it’s actually the lead that deteriorates — not the colors in the glass.

“When the glass is molten is when they add the chemicals to create the different colors. This color is in the glass — it’s not going to go away. It’s not going to fade,” Sommerfeld says. “I’m restoring windows now that are 80 to 100 years old and then they’ll be good for another 80 to 100 years and they’ll get restored again … So when you think about how long some of these pieces are going to be around, that’s pretty fortunate that there’s that kind of longevity in the kind of work that I do.” 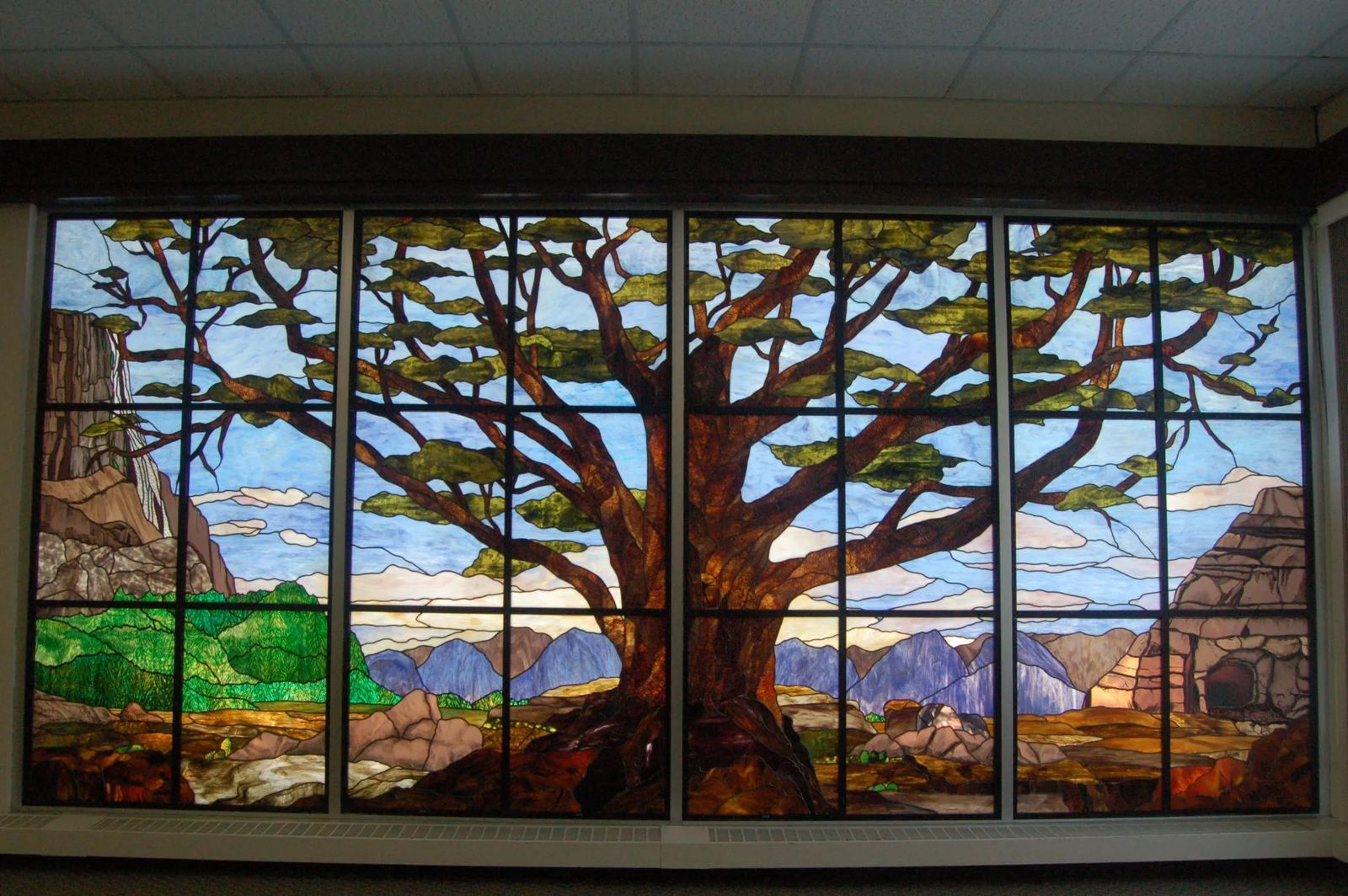 When asked about her favorite projects, Sommerfeld couldn’t narrow it down to just one. The artist has done work for over a dozen churches in the Billings area alone.

There was the First Methodist Church, for example, which she restored last year with four expansive panels in need of an overhaul. The Billings church was in the midst of a total rebuild but wanted to keep the original windows. Twenty-five years prior, Sommerfeld had actually done some minor repairs on those same panes, and in 2014 finally was able to replace them in full. The windows themselves were so large — roughly 4 feet wide by 6 feet tall— that they had to be brought in and repaired one-by-one. She shares that each window took approximately 45 hours to complete.

“It is a little bit different than somebody going into a gallery and buying a piece of artwork because, really it’s being made for them. I think that there’s a little bit more ownership by my clients. They’re always concerned with, ‘What if we move? We want to take it with us,’’’ Sommerfeld says.

Many of her former clients have morphed into close friends, but it’s not all sunshine and rainbows.
Sommerfeld once fired herself from a job because she and the 12-member church committee weren’t making any headway. The windows themselves were tall and narrow, which also presented a major design challenge.

A year and a half after she left, Sommerfeld received a phone call asking her to return. The committee had downsized and fleshed out their vision. She said yes, and ended up crafting four windows depicting the creation, nativity, crucifixion and the resurrection, with flowers in each piece to tie them together.
“Probably the most satisfying thing that can happen is when you finish a piece and it actually has the qualities you want it to have. A lot of times, you don’t get a true reading until the piece is installed because the light source is different,” Sommerfeld says. 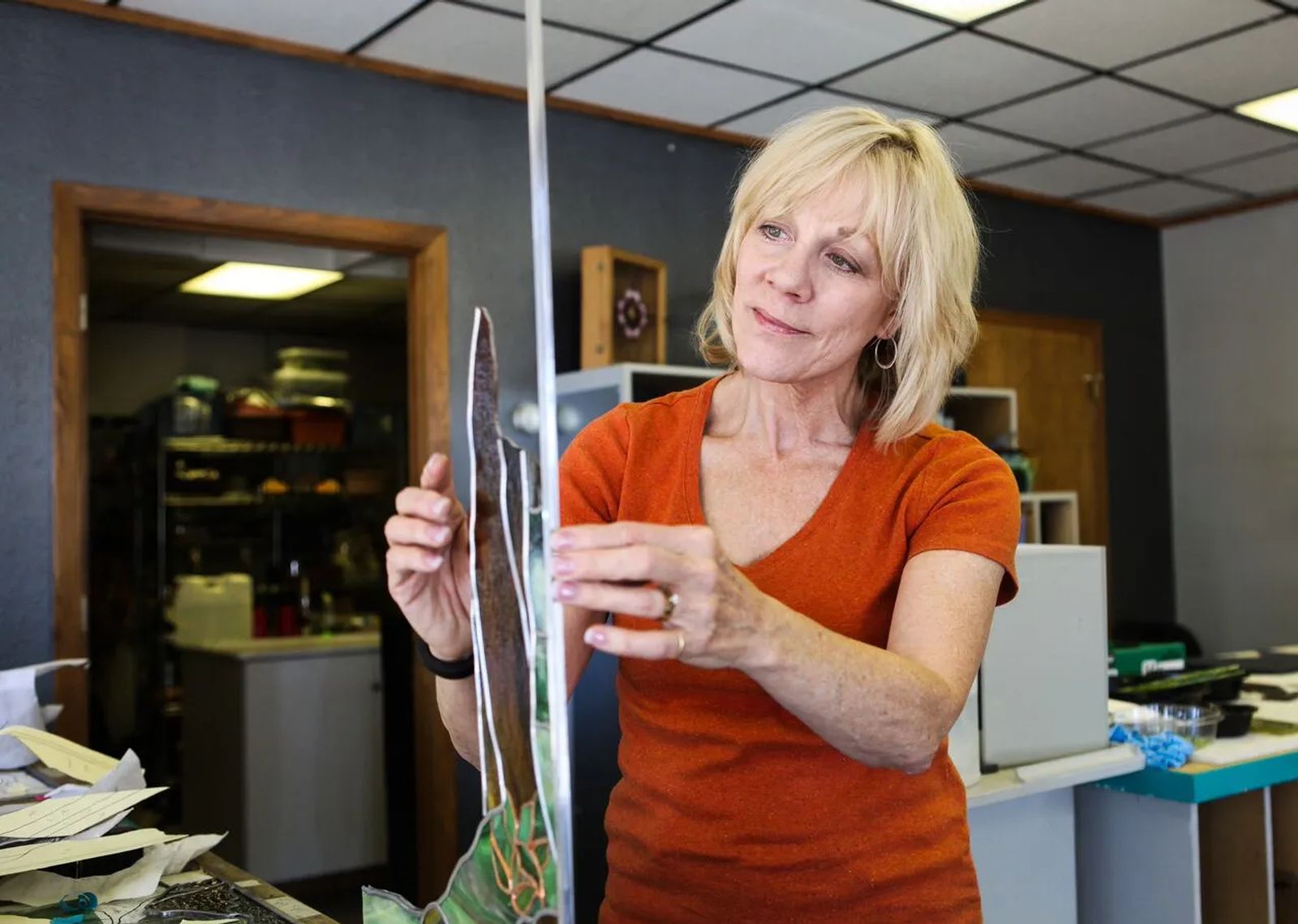 In the future, Sommerfeld hopes to have a hand in building, not just windows, but the art scene in Billings.

“I try to be a champion for the arts in Billings as well as being an artist,” she says. In addition to her work, Sommerfeld serves on the artistic committee for the NOVA Center for Performing Arts, directs plays and is the Art Walk representative for Billings Cultural Partners — which represents various sects of the art world in Billings.

“When people think of arts in our state, they think Bozeman, the western part of the state, Big Fork, Missoula and all of that,” she says. “Even though we serve a larger population, we don’t get very much help and we don’t get very much recognition as being an arts community so we have to do a lot about that ourselves.”

Sommerfeld’s hope is to raise the profile of Billings’ art scene and educate people, most notably the youth, about the value of the arts.