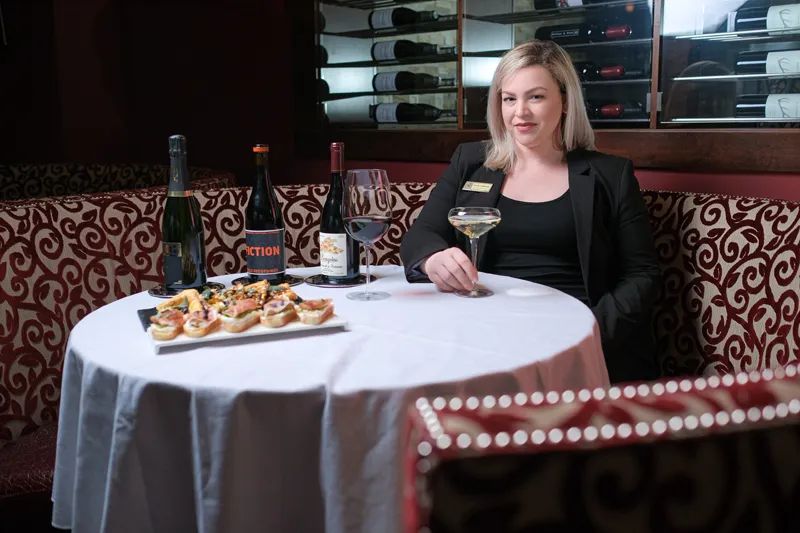 A woman is at the helm of the Northern Hotel kitchen. About a year ago, Sarah Seltvedt took over as the executive chef and food and beverage director, overseeing special events, catering and the hotel’s restaurants: TEN, the hotel’s elegant dining option, and Bernie’s Diner, the lighthearted and fun eatery.

“I am not afraid of reinventing the entire department,” she says.

With the Covid pandemic and a turnover of staff — including the hiring of Eric Trager from Carbon Fork in Red Lodge, who is now the executive sous chef — the time is ripe for fresh, innovative ideas.

“I would like people to not think of TEN as just upscale dining,” Sarah says. “I want to make it more approachable, a place definitely worth coming to.”

Sarah’s love of food began when she was growing up in West Palm Beach, Florida. “My grandmother could cook for the masses with 11 children,” Sarah says. “She grew her food and didn’t waste anything.” That’s also where she developed her love of seafood.

She began her career as a barista at the posh, oceanfront Hotel Breakers in Palm Beach.

She received her formal culinary training at the Auguste Escoffier School of Culinary Arts in Boulder, Colorado, which then led her to cook at the St. Regis Aspen Resort, and then to luxury Hotel Ivy and Heidi’s Restaurant in Minneapolis. At Heidi’s, Sarah learned modernist cuisine techniques, giving her skills with manipulating tweezers and liquid nitrogen.

“It was a great learning experience, but I was never so terrified of going to work,” she says of working for Stewart Wolfman, who had earned the nickname Chefzilla. In the following years, she bounced back and forth between Denver and the Twin Cities, working at Black Pearl in Denver, Loews in St. Paul and then Bigsby’s Folly in Denver, before coming to Billings.

In her experience, she’s seen a shift in what kind of experience diners enjoy.

“Fine dining is dead,” she says. “People go out to eat more often.” And, as a result, she says they want to extend those experiences rather than emptying the bank on one meal.

At the Northern, she’s hoping to create “a more playful approach.” Everything is made from scratch here and Sarah is working on creating cocktails with “more impressive garnishes and modern touches.”

Her confidence is high, but she admits, “It’s so challenging to be a part of the boys club and sustain femininity.” So, these days, she’ll put on lipstick and pearl earrings all while making changes in the Northern Hotel kitchen. 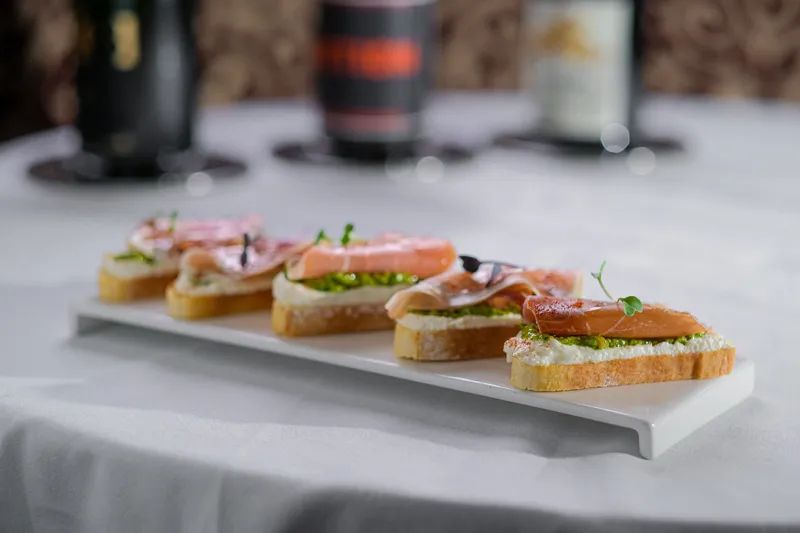 Pre-heat oven to 375 degrees. Line baguette slices on a baking sheet and drizzle with olive oil, sea salt and cracked pepper. Bake until lightly golden and crispy, approximately 8 to 10 minutes. Remove from heat and allow to cool. In a medium bowl, whip together ricotta and lemon zest. Set aside.

Smear two teaspoons of ricotta onto each crostini, creating a slight well in each. Place a dollop of pesto in the center of the ricotta and top with ¼ slice of prosciutto. Drizzle with honey and sprinkle with cracked black pepper. Garnish with microgreens or crushed hazelnuts. Serve immediately.

Place all ingredients except olive oil in a food processor or blender. While blending, slowly stream in olive oil. You can make pesto up to three days in advance – simply cover and refrigerate. 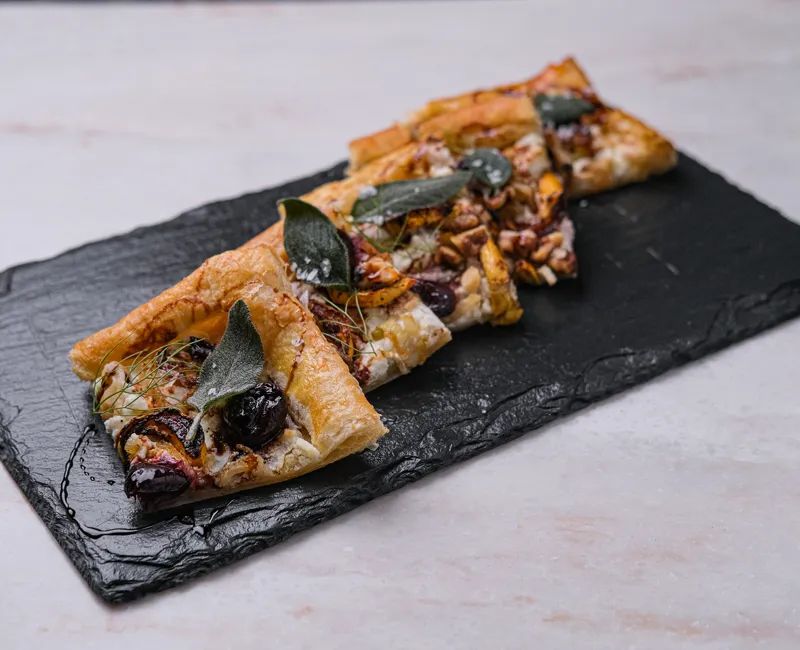 “I recommend Amaltheia goat cheese made in Bozeman and cherries from the Flathead Lake,” Sarah says. “Saba is cooked grape juice from Trebbiano grapes and has a caramelized grape flavor. If you cannot find Saba, balsamic glaze can be substituted.”

Preheat oven to 400 degrees. Remove puff pastry from packaging, allow to sit until pliable but cooler than room temperature and then roll onto a baking sheet. Score dough along the edges, like a picture frame, with a small knife, cutting three-fourths of the way through the dough. With a fork, pierce the center area of the dough repeatedly and place back into the refrigerator.

While puff pastry is chilling, cut off the green top of the leeks and split down lengthwise. Wash leeks thoroughly to remove dirt. Slice leeks into half rings, discarding root end. In medium saucepan, drizzle olive oil and place 1 tablespoon of butter into the saucepan on medium heat. When the butter begins to foam, add the leeks, stirring occasionally until the leeks soften and become translucent. Season with cracked black pepper and kosher salt.

Place the chopped walnuts on a small sheet tray and place them in the oven for approximately 5 minutes. Toast until lightly browned and aromatic. Remove from the oven and allow to cool.

Cut off both ends of the squash and split down the center lengthwise. With a strong metal spoon, scrape out the center of the squash to remove the seeds and membrane. Slice the squash into ¼” half rings and toss in olive oil, season with kosher salt and dark chili powder. Spread out onto a sheet tray and roast in the oven 10-15 minutes or until tender, but not mushy. Remove from heat and set aside.

Bake the puff pastry as soon as you remove it from the refrigerator for 10-15 minutes. The outside of the dough should begin to rise higher than the center. To help encourage this, halfway through baking, using a fork, gently press the center of the dough down and immediately return to the oven. The dough should be mostly cooked and lightly golden.

In the center of the puff pastry, spread the goat cheese mixture evenly between the two flatbreads, making sure to get into the corners and along the inside edges. Spoon the melted leeks onto the goat cheese, leaving any remaining liquid in the pot to avoid making the flatbreads wet. Arrange the squash halves onto the other ingredients, dot with the pickled cherries, and sprinkle the walnuts overtop.

Place in the oven and bake until golden brown and the goat cheese begins to brown. Remove from the oven and lightly drizzle with saba, sprinkle with sea salt, and finish with a bit of cracked black pepper. Cut the flatbread into 8-10 pieces. To finish garnishing, sprinkle with chopped parsley or fried sage leaf. Serve immediately.

Allow goat cheese to come to room temperature, add all remaining ingredients and mix thoroughly. Feel free to prep up to three days in advance and keep refrigerated. 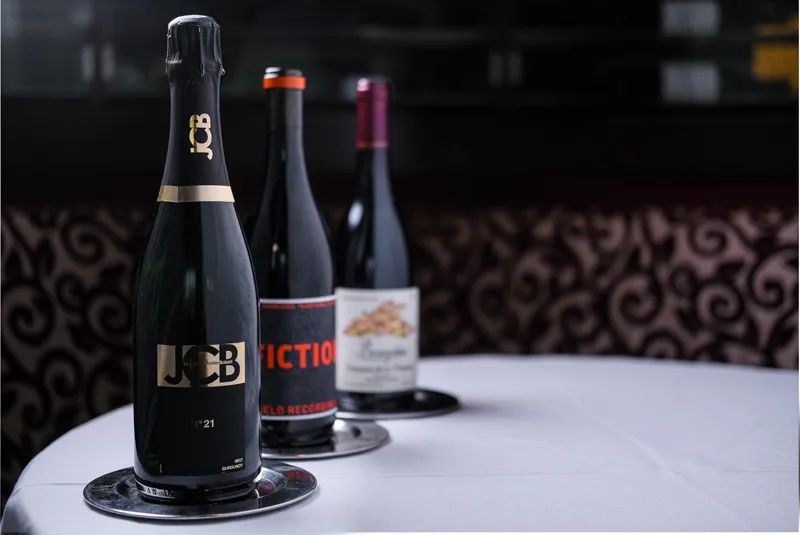 ●     To add a bit of elegance to your appetizers and desserts, go semi-homemade. Use a tartlet, mini cannoli or sweet or savory cornet shell. This saves labor on your end and adds that professional look.

●     Prepare anything and everything you can in advance! Cookie doughs, sauces, dips, anything that involves cutting or chopping can be done ahead.

●     Do not chill your bubbles too quickly or make them too cold. Ever wonder why that bottle of Prosecco was impossible to open? Or that bottle of Champagne foamed everywhere? Chances are the wine was chilled too quickly or got too cold, or both. To avoid this, place the bottles in the refrigerator the night before.

●     Use fresh and high-quality ingredients. Using whole nutmeg and grating it yourself makes a world of difference. So does using higher quality grass-fed, salted butter with bread instead of generic sweet cream.

●     Make a game plan. Cooks and chefs all over the world write prep lists. Organizing your food to-do list on paper makes what seemed so daunting much more achievable.

●     When building platters or boards of any kind, start with your ramekins or mason jars first. By placing the obstacles that hold jams, nuts, honey, or olives down first, you’re able to weave your cheeses, salami, and crackers around them instead of trying to make room later. Fill in bare spots with fresh rosemary, dried fruits, or bunches of grapes to really make your display pop.