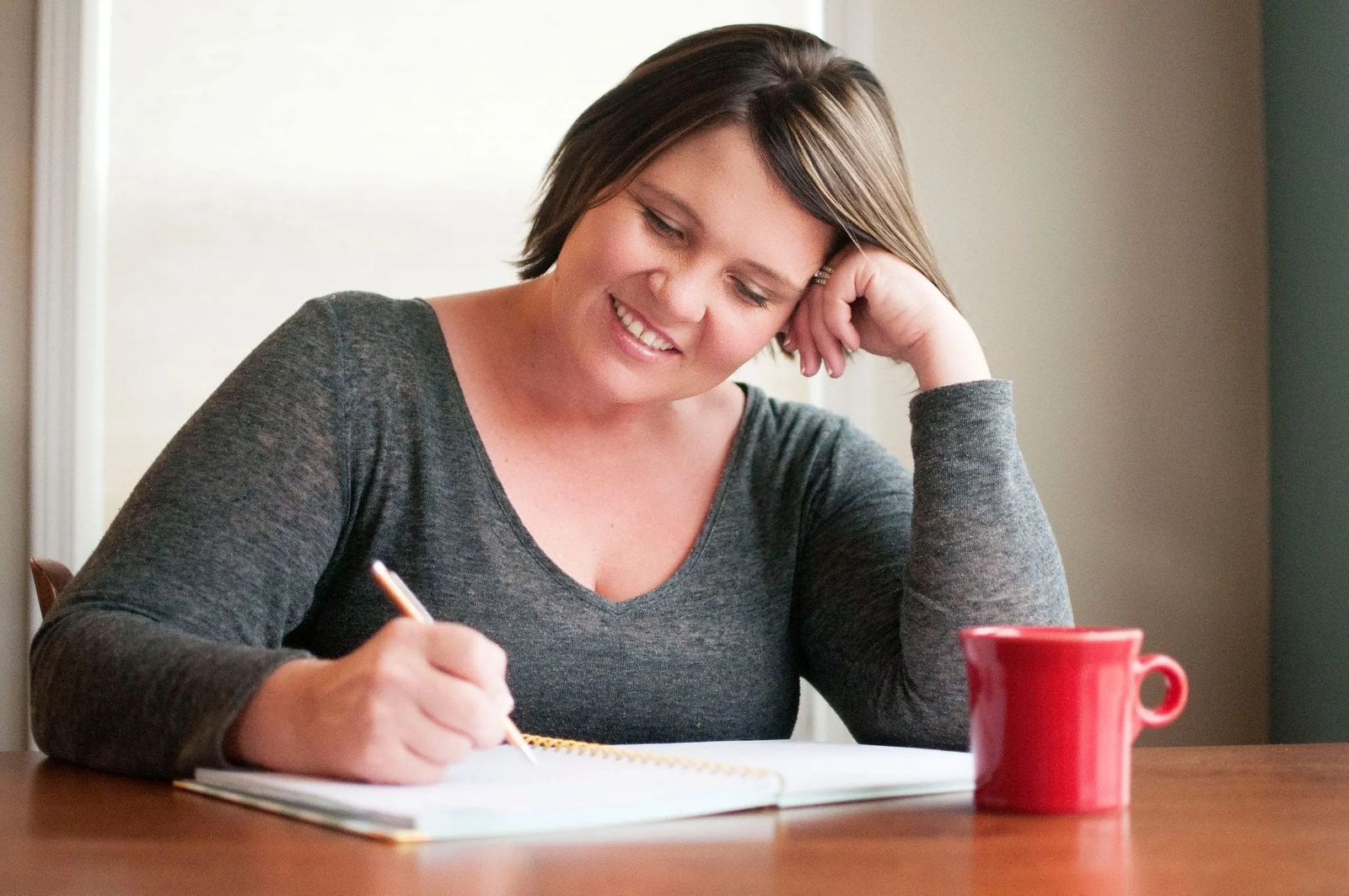 Sometimes when you need something, there are no good solutions, so you have to just create what you need. That is where Nicole O’Shea was last year, and that was how her company, Sixth and Baker, was born.

Sixth and Baker offers a day planner that’s unlike others on the market. It focuses less on the standard professional work day and more on what Nicole believes really matters — gratitude, giving and grace.

“I’m a planner junkie — a to-do list junkie,” Nicole says. “I found myself having too many lists, and sticky notes everywhere, so I designed this for myself. In the beginning I was just making it for me. It was part of my healing.” 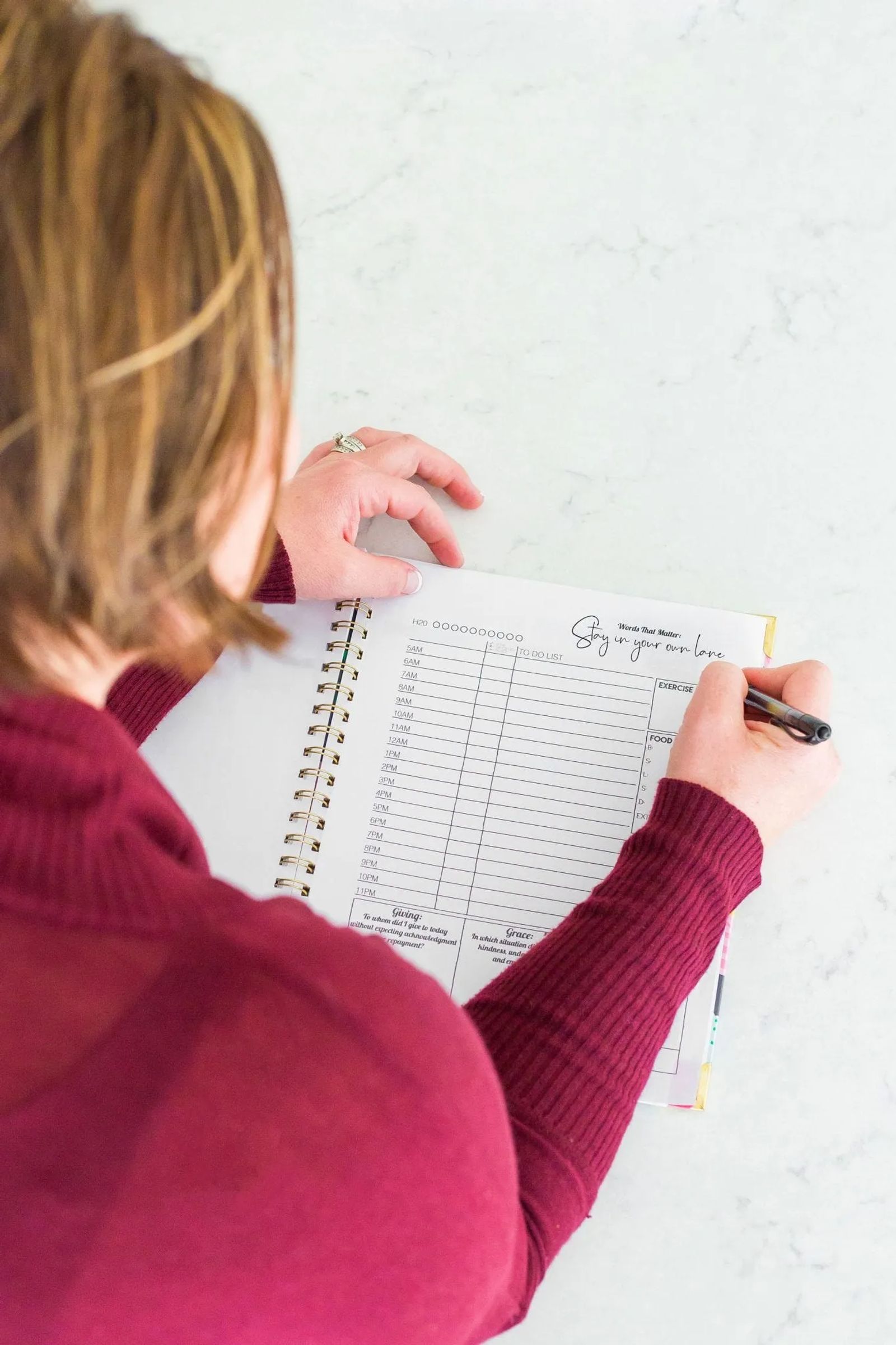 Though Nicole could never have known it at the time, Sixth and Baker was, in a way, sparked during the spring of 2017 when her two children were involved in an ATV accident with a relative. Her daughter was knocked unconscious and her son suffered what turned out to be minor injuries, but from her kitchen window, Nicole feared a mother’s worst nightmare and ran outside in a panic.

The family lives in Luther and both children were rushed to the ER in Red Lodge. Her daughter suffered a serious concussion and abrasions. She still has scars — both physical and psychological — from the accident.

The event brought t0 the surface some of Nicole’s darkest demons.

Beneath her usually bubbly and outgoing exterior, Nicole was, for as long as she could remember, a wild tangle of fear and worry — a prisoner of past trauma. She was the victim of an accidental shooting at age 4, witnessed her parents’ death in an accident at age 11, and she was sexually assaulted as an adolescent and again in her 20s. Her only method of coping was to keep her past a secret and pretend nothing had happened.

After the accident, Nicole slipped into a deep depression, pushing away her husband and even her closest friends. They never gave up, though, she says, and eventually they convinced her to see a therapist. In just a few visits, it was clear to her therapist that Nicole was suffering from PTSD — post-traumatic stress disorder.

“My kids’ wreck was a trigger that released a lifetime worth of stuff that had been bottled up,” Nicole says.

Her therapist encouraged her to keep a daily journal as well as a separate gratitude log, writing down things she was grateful for. In time, she began laying out her daily pages to include both, as well as to-do lists and a scheduler. It became her order in the chaos. Nicole wondered if her unique planner could help others live fuller lives and find healing of their own. 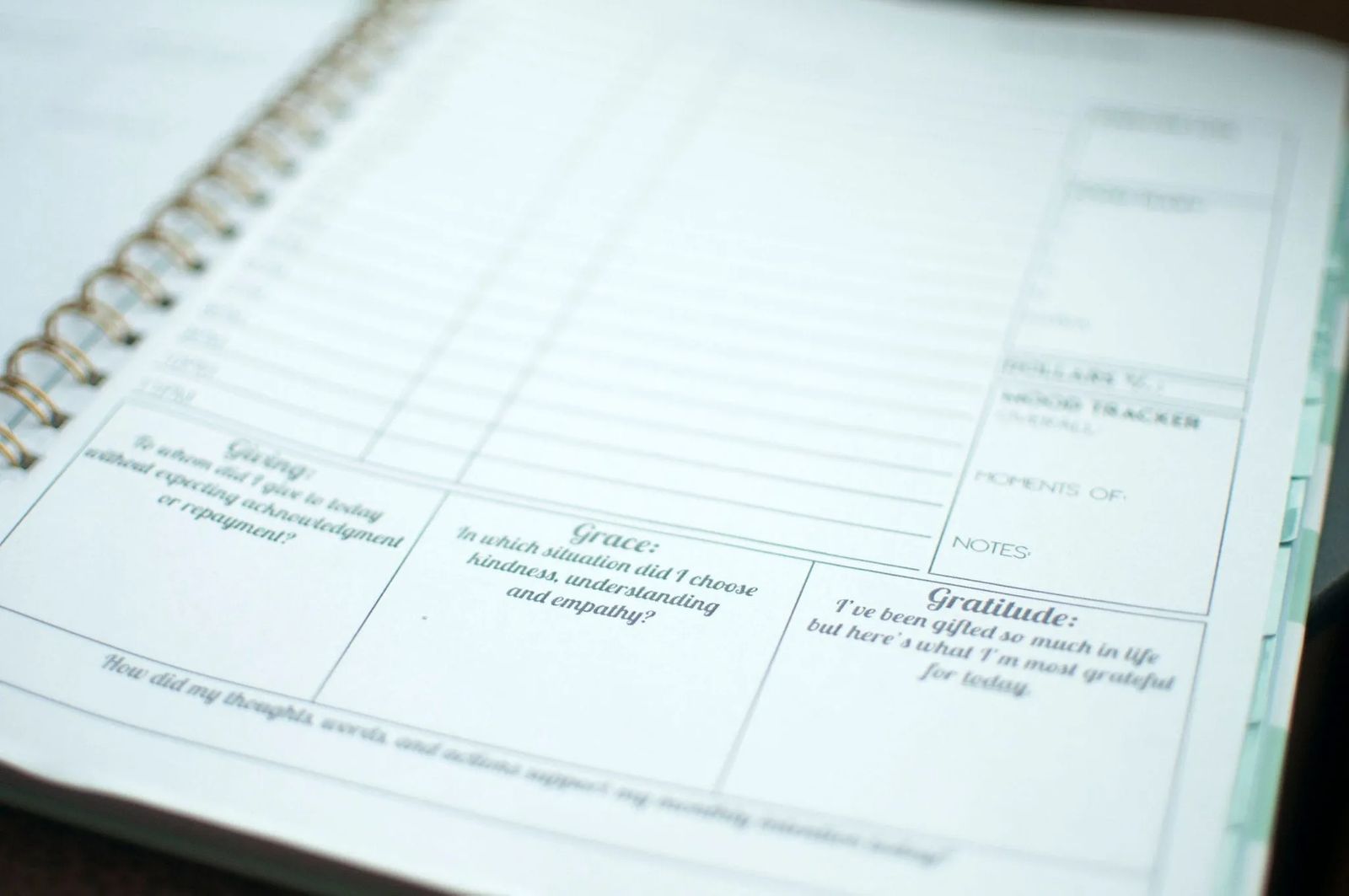 HOW THE PLANNER IS DIFFERENT

While most planners include only one page for weekends, Sixth and Baker’s planner includes a page for every day of the year. Nicole, a professional photographer, knew plenty of people who worked weekends — or were just as busy on weekends as weekdays — and were not satisfied with half a page for Saturday and Sunday. The appointments sections in Nicole’s planner also go later in the day.

“I worked later than 6 p.m. and on weekends, so all the planners I tried didn’t work for me,” she says.

There are also tracking features for healthy living, giving, a place to express gratitude, and a place to extend yourself a little grace and encouragement. At the top of each page is a section for the user to write her own inspirational quote.

“I’m a sucker for inspirational quotes, but I have a hard time believing that 1,000 people can all be motivated by the same quote,” she says. “And if something resonates with you, maybe it should be on your page for two weeks.”

The Sixth and Baker planner also fosters connection. There’s also a tool in the book at the beginning of each month that encourages the user to write a list of up to 30 people to reach out to during the month.

“There’s a planner out there for every goal,” she says.  “This planner is for people who want to live a gentle life.” 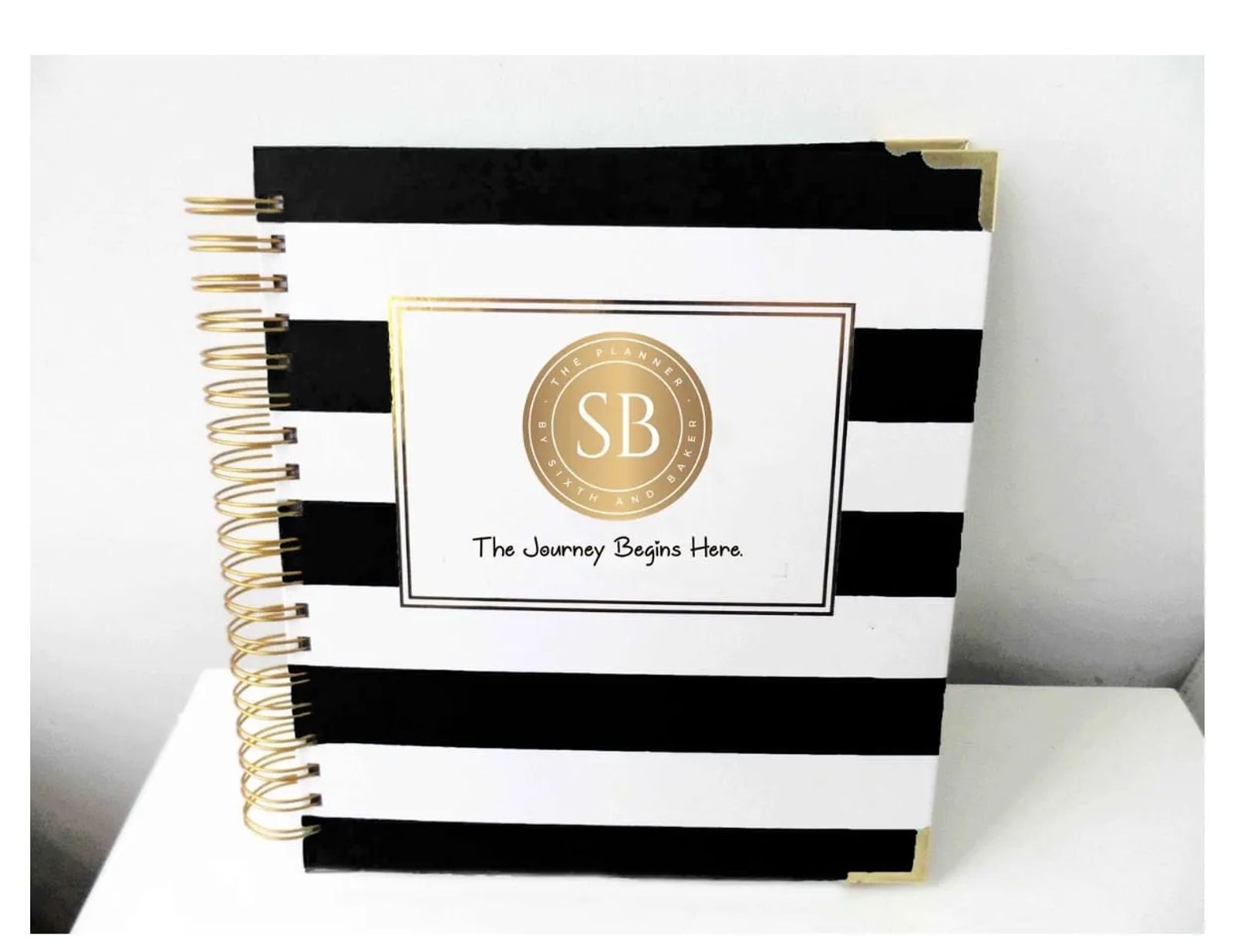 THE MAKING OF SIXTH AND BAKER

Taking her fat, spiral-bound notebook full of ideas and making them a reality was a months-long challenge, especially for someone so unfamiliar with the process.

“At first I thought, it’s a book so I need a publisher,” Nicole says. “Everyone I talked to just laughed and finally someone told me you need a manufacturer.”

However, finding a manufacturer isn’t easy. As it turns out, they don’t deal directly with designers/owners and don’t advertise their services on Google. Despite her desire to have the planner manufactured in the United States, Nicole couldn’t find anyone who could do what she needed. She ended up working with the same Chinese manufacturer that makes planners for Kate Spade, Day Designer and Simplified Planner — all the big names in the business. Nicole says the time difference and language barrier have been a challenge.

Nicole would love to someday have a product made in the United States, or, better yet,  in Montana, but until then, she’s says she’s in good hands.

Since she didn’t have a marketing budget, Nicole started with an unconventional marketing strategy. She focused on in-person networking and spoke with 29 groups ranging in size from two to 15 people. She simply shared her story of grace and healing.

“My intention was to tell them about the book, but I quickly discovered that that wasn’t going to happen with me,” Nicole says. “It quickly turned from a presentation to a conversation, and people shared their stories, too. And that became my marketing plan — raw, honest and vulnerable.”

She also turned to social media to get the word out. She focused on Instagram, primarily, launching on Facebook later. Sales pitches were always subtle, with messaging focusing on soul-level health and wellness.

Altogether, Nicole pre-sold 5,000 planners, and she is planning to have another couple thousand printed to sell in December and January.

Her story captured the interest of marketing professionals at Rimrock Mall, where she won the Battle of the Pop-Ups contest. The award includes free kiosk rental and a marketing package. She’ll be stationed at center court through the months of November and December.

Nicole will also be promoting wellness workshops that she’s leading, which focus on what she calls “honest-hearted, peace-seeking, intentional living.” The workshops embody the healing values behind Sixth and Baker’s planners, and Nicole says they are a natural extension of her mission.

She’s already laying the groundwork for the 2020 planner, which will include a few changes to foster even more healing, peace and self-compassion. Pre-sales are expected to start early in the new year. Until then, Nicole continues to focus on her healing by leading others down the same path of giving, gratitude and grace.

FOR MORE ABOUT SIXTH AND BAKER, visit sixthandbaker.com