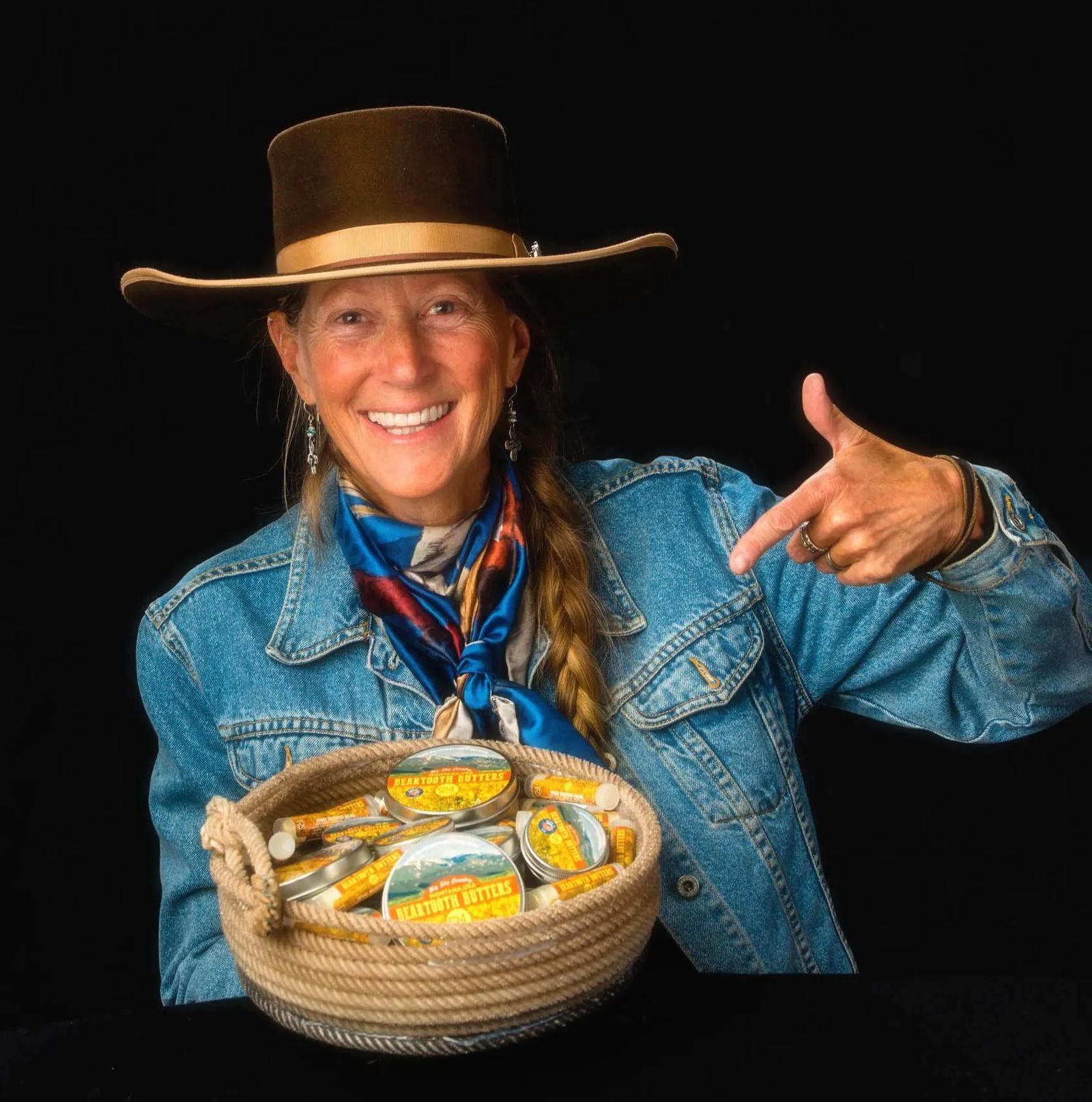 When Colleen Kilbane first started researching recipes to make her own lip balm, she was looking for any chemical-free, all-natural solution that would heal her chapped lips. As it turned out, she was starting a journey that would provide healing for more than just her lips.

Colleen lives in Red Lodge and Beartooth Butters is made in Colleen’s home in small batches. She makes only two products, lip balm and lotion. Her products are made with 100 percent all-natural and organic ingredients, and are available only online and at Sylvan Peak Mountain Shop in Red Lodge. Her business is simple, like the ingredients in her products, and Colleen, a busy, budding photographer, horsewoman, and all-around outdoorsy gal, likes it that way. 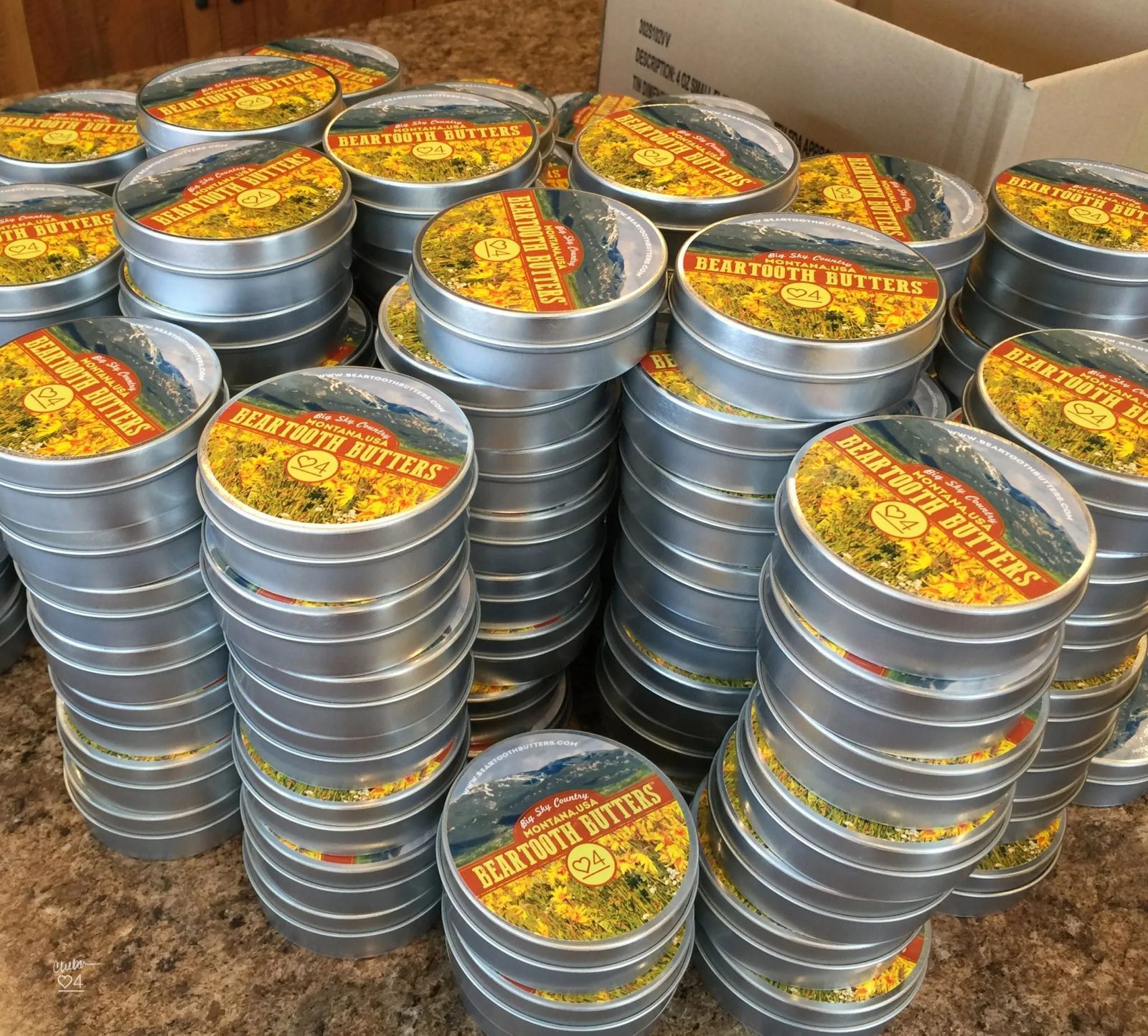 Great ideas are born from an unmet need, and Beartooth Butters is no exception.

Several years ago Colleen was diagnosed with celiac disease, a genetic autoimmune disorder that is triggered by eating gluten. Untreated, the symptoms include not only intestinal pain and digestive problems, but a host of other problems attributed to the damage done to the intestine.

The symptoms plagued Colleen nearly her whole life, but the doctors she visited only treated the symptoms. Finally, she decided to see a functional medicine practitioner, who looked at the underlying cause of the symptoms. After a thorough battery of tests, he diagnosed her with celiac disease. The testing also offered additional insight – Colleen discovered her body had zero-tolerance for chemicals.

She quickly transitioned to an all-organic, whole foods diet, but when symptoms persisted she took a look at her beauty regimen and was shocked to find how many harmful chemicals her cosmetics, hair and skin care products, lotions, and lip balms contained – even the ones that claimed to be “all-natural.”

“I thought, I can make something much better without all that nasty stuff,” Colleen says.

She started with lip balm, a product she had been using almost all day long for years. Online she researched the properties of various oils and other ingredients to learn as much as she could and began experimenting with small batches, tweaking them to her tastes and tolerance. 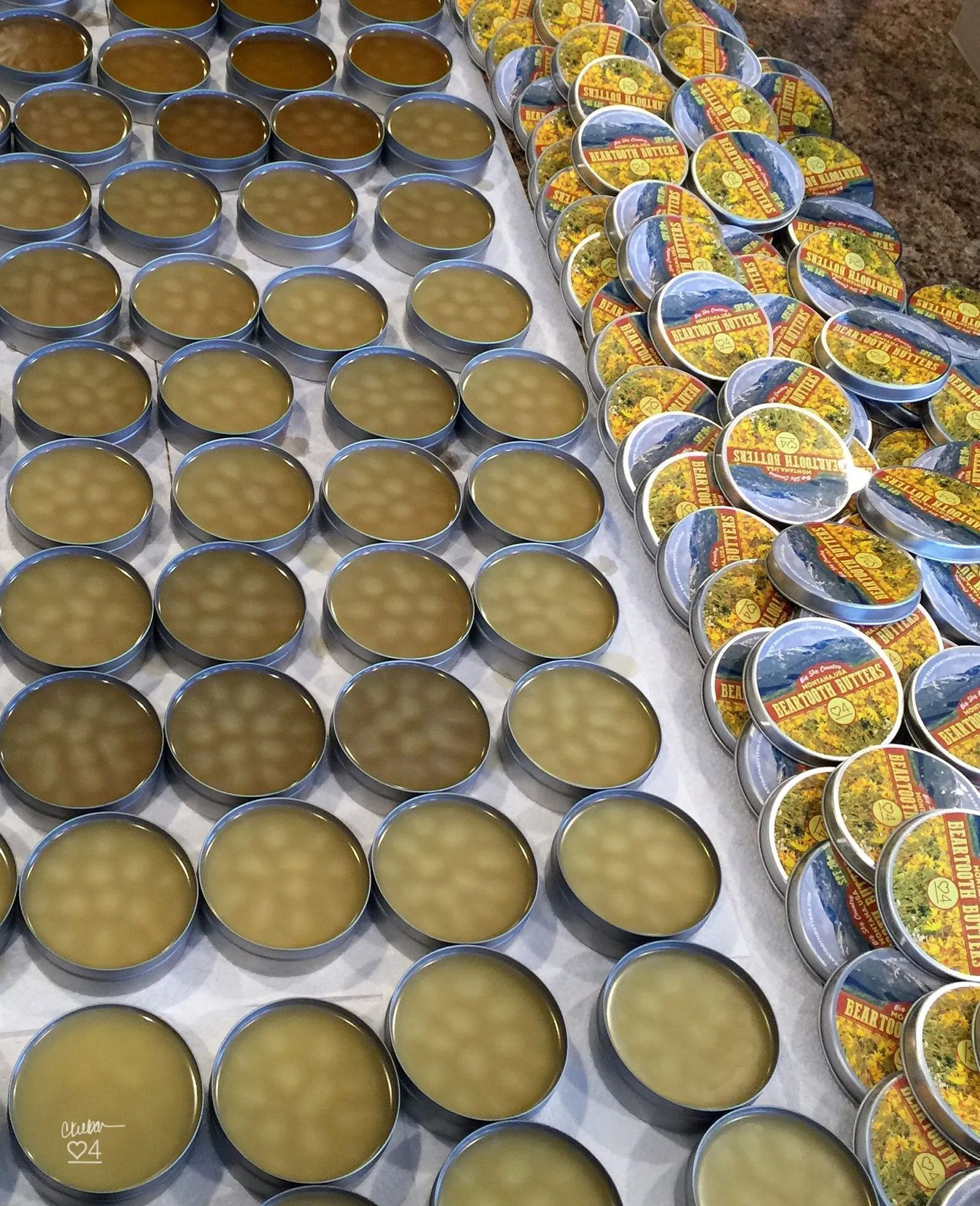 “I just started putting a recipe together,” she says. “It has taken some time to perfect.”

The recipe for her lotion followed. It’s a rich, semi-solid paste that matches the consistency of butter. Even with the recipe down, it took a while before Beartooth Butters was born.

A GIFT OF HEALING

Colleen is a self-described caregiver, and she couldn’t help but give away her lip balm and lotion. Of course, her friends had a steady supply, but she would even overhear someone at the post office complaining of dry hands or chapped lips and slip them a tin of butter or a tube of lip balm. They were a hit, and after a while she could hardly keep up with her giving habit.

Over time, she discovered that her butter could be used for more than just dry, cracked hands and lips. It helped to heal rashes, bug bites, and the symptoms of eczema. Colleen used it to treat small scrapes, and even uses it to deep condition her hair.

Finally, her friends intervened and encouraged her to begin selling her products, especially since she’d gotten so many people hooked on them. Colleen named them Beartooth Butters after the Beartooth Ranch, a guest ranch on the Stillwater River where she spent her childhood summers. She branded the label with a photo she took of a field of glowing yellow arrowroot balsamroot with the Beartooth Mountains in the background and she earned the Made in Montana designation. She went “all in” and began formally selling her products in December.

Now, Colleen is making much larger batches to keep up with the demand. She makes batches of 1,000 lip balms, 280 tins of butter, and 280 small, pocket-sized butter tins.

“I work my butt off for a good straight week, and then I can play for a couple of months,” she says.

Marci Dye, owner of Sylvan Peak Mountain Shop, was excited to sell Beartooth Butters in her Red Lodge outdoor supply store. Her store is the only retail outlet that sells Colleen’s products.

“I twisted her arm really hard to get her to sell in our store, because I knew it was a really great product,” Marci says. “It’s been a perfect fit.

Early on, Marci encouraged Colleen to make smaller tins of the hand cream, which have been a big hit. Marci’s customers range from tourists who want to buy branded products made in the area, to hikers and river guides who swear by the Beartooth Butters for their cracked and weary feet.

Ten years ago, Colleen never could have dreamt of owning a successful small business. She was 45, and beginning a new life after a 20-year-long, difficult marriage. The Beartooth Ranch, with so many beautiful memories called to her and Colleen came out west to stay with her sister Jayne who lives in Red Lodge.

“It’s been hard,” she says, sweeping away a tear with the sleeve of her jean jacket. “I feel like my life started at 45.”

She had a lot of catching up to do, but it didn’t come all at once. Little by little, Colleen began to find herself and identify her passions. She picked up a camera and taught herself how to use it, training her lens on the world around her, including wildlife, cowboys, horses, and the western way of life. Eight years later her photos have been published in Montana Outdoors Magazine and several other publications.

Linda Wylie met Colleen at the Billings airport several years ago. What started as a casual conversation about photography, blossomed into a lasting friendship. Linda lives in Lockhart, Texas and has been one of Colleen’s sincerest supporters in her photography and in developing the Beartooth Butters business.

“She just oozes love and compassion,” Linda says. “I get excited for what’s possible for her not just in the future, but also what she has at her fingertips now.” 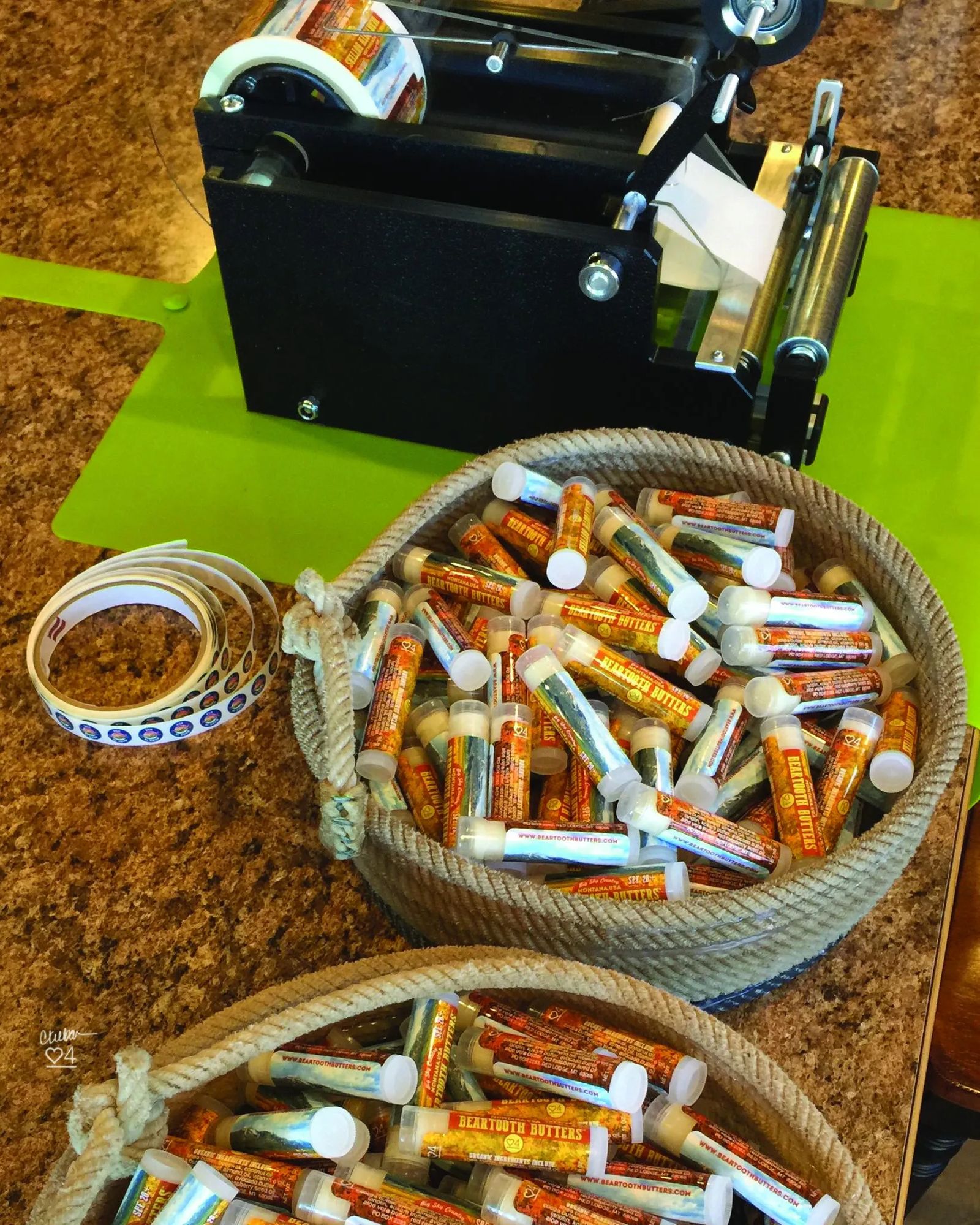 Linda always encouraged Colleen to follow the leading of her heart, and for Colleen, that was to help others, and to give back in a bigger way. Beartooth Butters, with its simple recipe and healing properties, provided that opportunity. It’s also something she can call her own, from the very first batch of lip balm to her first sale, she has done it on her own.

“This is sort of my baby,” she says. “I’m proud of it and I’m proud that I’ve done it myself, but more than anything I’m proud of the fact that it really helps people,” Colleen says.

Colleen has since remarried, and her husband Jim, is a wholehearted supporter – and user – of Beartooth Butters. The couple spends their free time outdoors exploring the landscape around Red Lodge. Colleen regularly rides her horse Two-Fer at a nearby arena and on mountain trails, and Jim and Colleen love to host friends and family who come to visit from all over the country.

Beartooth Butters isn’t going to make Colleen her first million, but she’s okay with that. She likes that it’s small and she can manage it all herself, and best of all, she’s doing what she loves – helping people.

YOU CAN FIND BEARTOOTH BUTTERS online at beartoothbutters.com or at Sylvan Peak Mountain Shop in Red Lodge