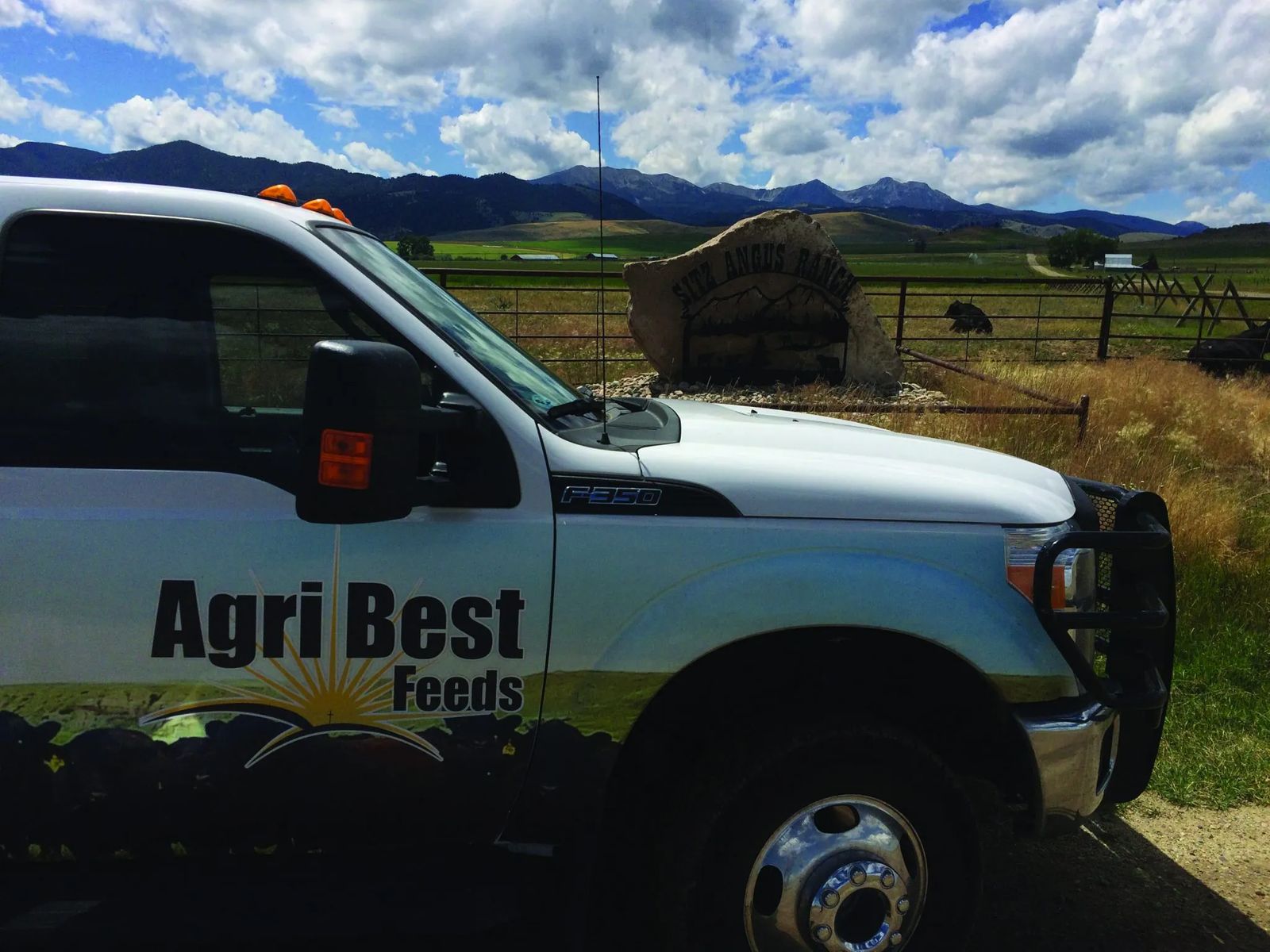 If you’re going to sell a product, it sure helps if you believe in it. That explains why Irv Haidle was able to build a thriving family business based on sales of SweetPro, a feed supplement made from distiller’s grain.

Haidle almost didn’t get into the business, though, because when he first heard the claims being made about the supplement, he thought they were too good to be true. Now, the website for Agri-Best Feeds, the company Haidle founded, is full of glowing testimonials from SweetPro customers. 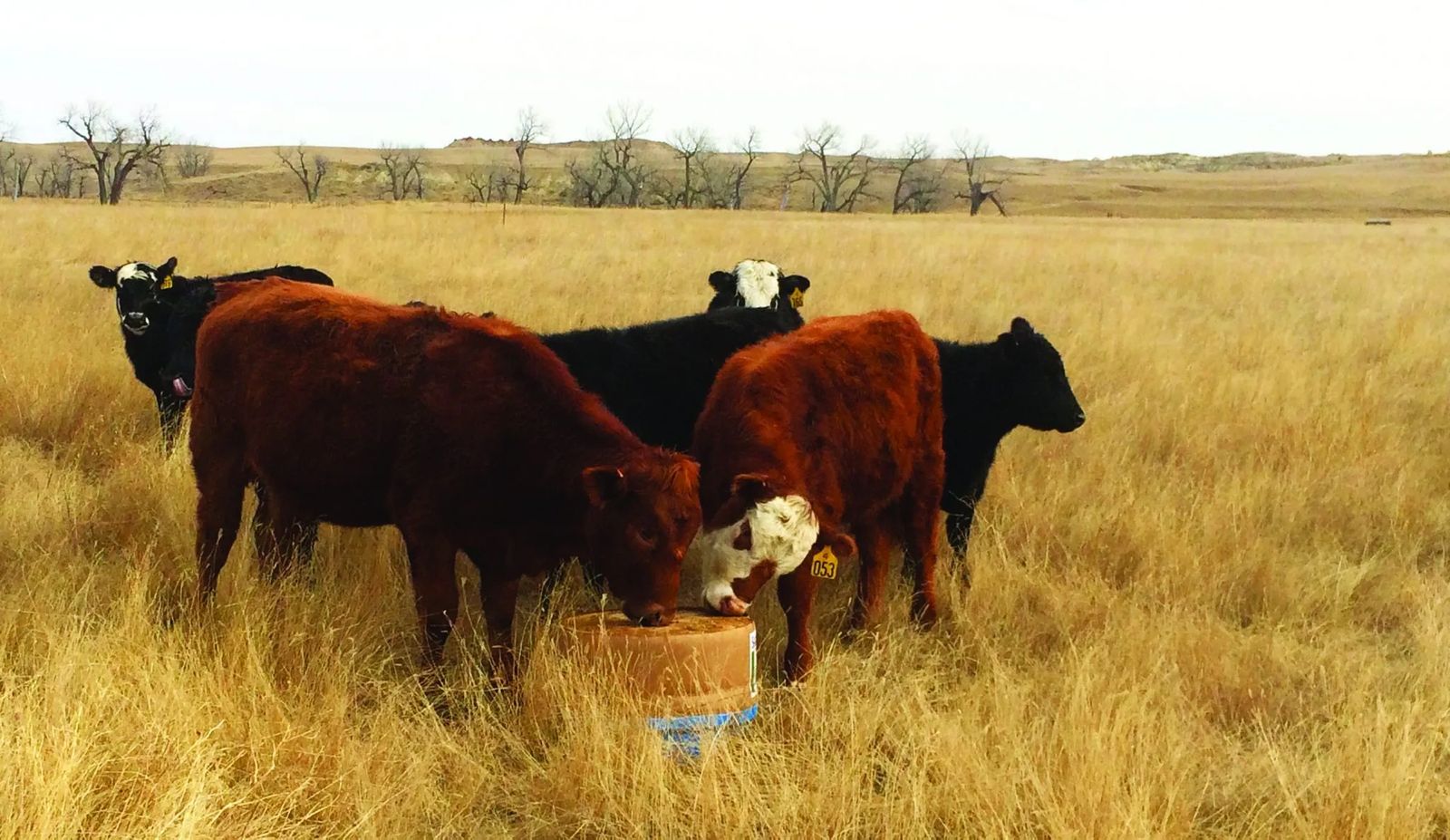 Chad Berger, of Mandan, N.D., is one of them. The five-time Professional Bull Riding stock contractor of the year told Raised in the West that making the switch to SweetPro was “the best thing I ever did. It really improves the condition of my bulls, and the performance just improves dramatically. … You can see it in their hair, coat, and everything.”

It has also done wonders for his rodeo cows, Berger says, increasing chances of conception to the point where his open rate, which used to be 15 percent, is now just 2 or 3 percent. Berger says he preaches the SweetPro gospel “to anybody willing to listen. It’s highly recommended by me, I can tell you that.”

Irv Haidle’s son-in-law, Scott Anderson, Agri-Best’s operations manager, says Haidle, who died in a car accident in 2011, was contacted more than 10 years ago by Bob Thornberg, president and founder of SweetPro Premium Feed Supplements. Thornberg wondered whether Haidle, who was running a cow-calf dry lot herd in Fallon and had done some hog-supplement distribution, wanted to distribute SweetPro, too.

Anderson says Haidle was skeptical of the claims made by Thornberg and put all the information on SweetPro in a drawer, pretty much forgetting about it. That’s where matters stood for more than a year, until Thornberg reached out to him again, to see if he’d tried using the supplement yet.

This time, Haidle decided to give it a try. Thornberg had told him to expect a 25 percent reduction in hay consumption, but after six weeks, according to Haidle’s records, that wasn’t quite accurate. His herd was actually eating 28 percent less hay.

That was enough for him. After more testing, market research and numerous discussions with producers familiar with SweetPro, Haidle founded Agri-Best Feeds and introduced SweetPro at the 2006 Northern International Livestock Expo in Billings.

SweetPro uses distiller’s grain, a byproduct of ethanol production, to form supplement blocks that are put out in plastic tubs. Besides added nutrition, SweetPro gives cows (and horses) long-lasting energy and greatly enhances their digestive system, making for much more efficient use of forage. It works so well because it contains a mix of minerals and vitamins, protein, and ProBiotein—a proprietary blend of prebiotics, yeast, enzymes and protein—all aimed at making the digestive system perform optimally.

“It’s all about the microbes and getting that rumen as healthy as possible,” Anderson says.

After SweetPro was introduced at the NILE, the response was so good that Haidle had to think about scaling up more quickly than he had planned. He and his family formed a corporation in the spring of 2007 and Haidle brought on Anderson as director of operations. By the end of that year, Haidle and Anderson had met with more than 700 producers at more than 50 meetings around Montana and four other states. 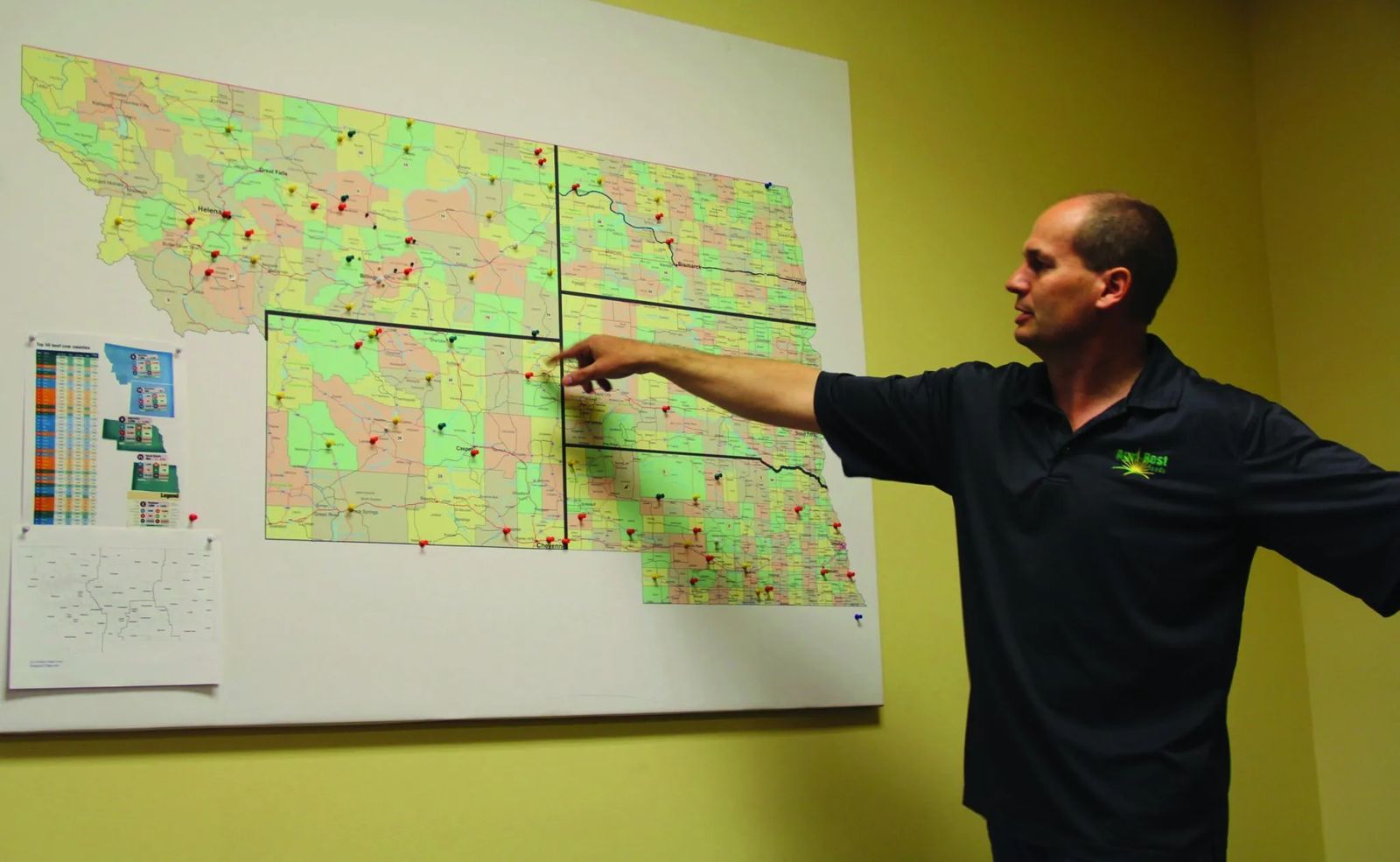 Just three years later, Agri-Best Feeds was named Family Business of the Year by Montana State University in the new business category. The business was well established by fall of 2011 when Haidle died in the automobile accident.

By then, Irv’s son Daryl Haidle had come aboard as distribution manager, and another son, Kevin Haidle, become president of the company in 2012. The team now includes Kevin’s son Taylor, as business manager, and Irv’s son Dean Haidle, a pastor in Nebraska who helped the company open a warehouse in Callaway, Neb. He is also a corporate officer.

In the early days, Anderson ran the operations out of his house in Shepherd while Irv Haidle handled the distribution out of his ranch in Fallon. Distribution moved to Lockwood in 2008, when Daryl Haidle found a warehouse there, but soon they needed more office space, too. Marty Connell, a Billings developer and former veterinarian who knew Irv, found a home for Agri-Best in the Kairos Center on the east end of downtown Billings. Connell had spent years transforming the abandoned Pierce packing plant into a complex of offices and warehouse space.

Scott Anderson moves a pallet of SweetPro in the Agri-Best Feeds warehouse. [/caption] 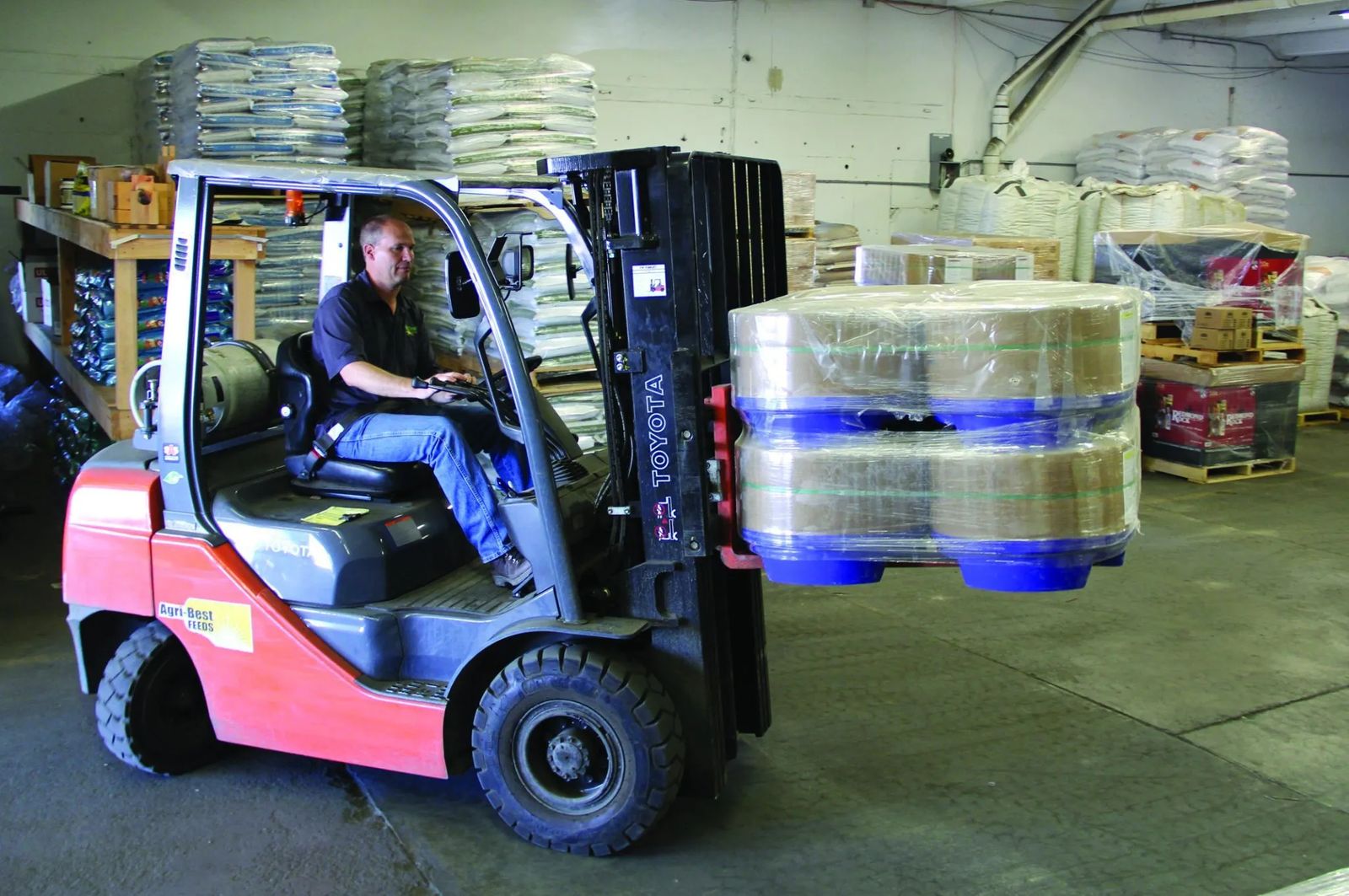 Agri-Best has been in the Kairos Center since 2010. It was a good fit anyway, Anderson says, but it was even better that an old friend of Irv’s got them in there, and that it used to be a packing plant.

“It was kind of neat to see all that come together,” he says.

Another big fan of SweetPro is Ryan Herzog, whose family has been ranching near Rapelje since 1952. They were introduced to the supplement by Kevin Haidle, who worked on the Herzog ranch years ago when they used to run a hog operation. After switching to cattle, the Herzogs were looking for a supplement that would allow them to meet their goal of using standing grass exclusively.

Rapelje sits in dry country and the Herzogs have no irrigated pastures. “Your summers get burned up pretty quickly chasing hay around here,” Ryan Herzog says. By putting out SweetPro in late fall through early spring, they are able to keep their herd on grass, with great results. 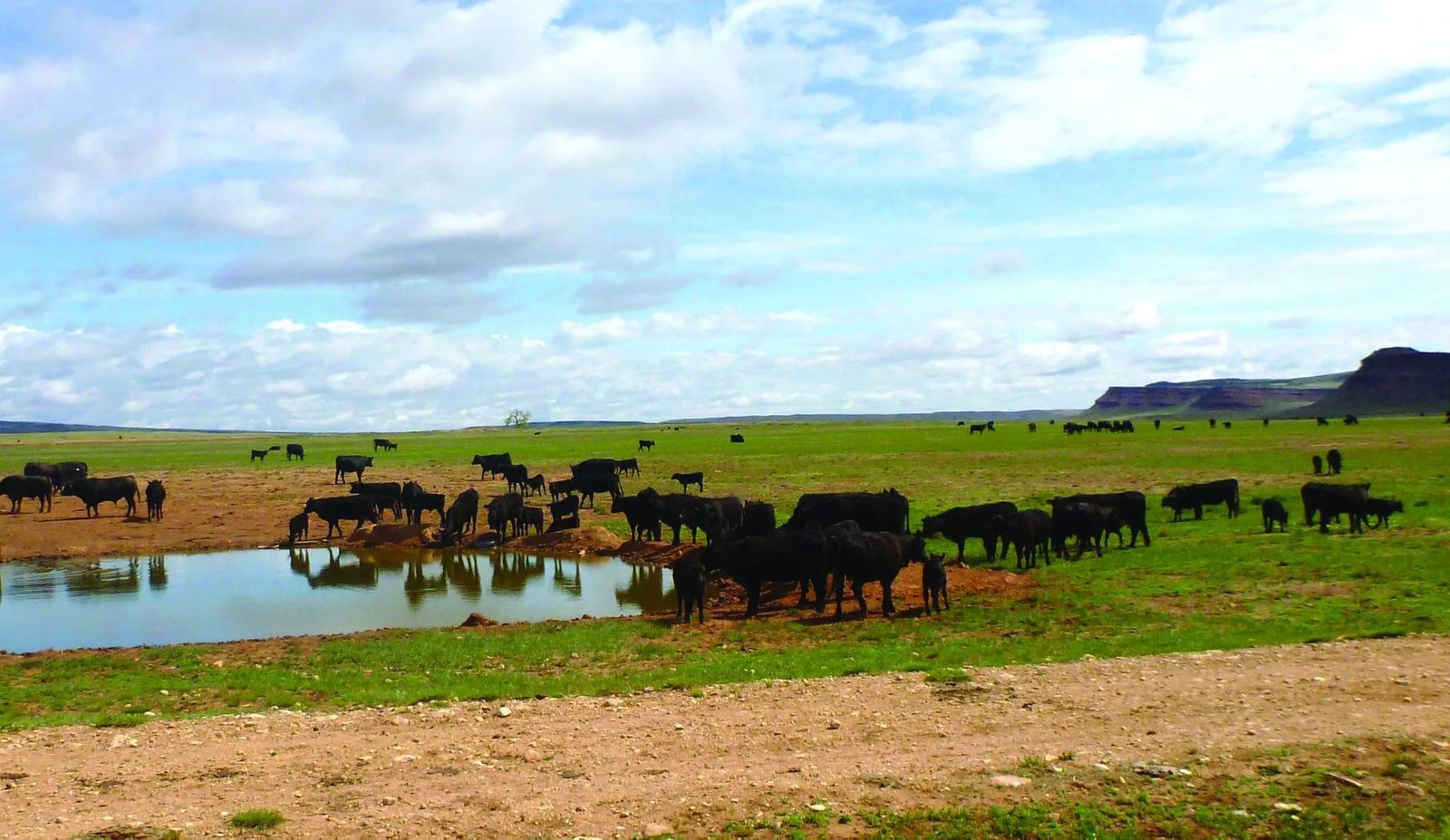 “These cows, they just perform fantastically, and I’m not out feeding them,” he says. The SweetPro makes it easier to spread the herd out, too, he says, because all he has to do is move a tub of SweetPro into the corner of an underused patch of pasture and the cows will follow it there.

In addition to SweetPro, which accounts for 75 percent of Agri-Best’s sales, the company is also the regional distribution arm for Redmond Natural Trace Minerals, a mix of unprocessed sea salt and more than 50 trace minerals. It helps animals make better use of their feed, making them heavier and healthier.

There were some hiccups when Agri-Best Feeds first started marketing SweetPro, having to do with consistency of the product and the difficulties of distribution, but they’ve straightened those problems out, Anderson says, and “we’ve got a lot of great momentum going now.” Last year, total sales topped $3 million.

Anderson gives much of the credit to Irv Haidle, who was originally asked by SweetPro to distribute the supplement only in eastern Montana.

“The way Irv’s mind works, he was a big-picture guy,” Anderson says. “He wasn’t looking at just eastern Montana. He was thinking, ‘How can we get this to everyone in Montana?’” And as more family members were brought in to deal with the demands of a growing business, Agri-Best Feeds expanded beyond Montana into Wyoming, Nebraska, and northern North Dakota.

Agri-Best Feeds is definitely a family affair. Seen here in the company warehouse are, left to right, Taylor Haidle, Kevin Haidle, Scott Anderson and Daryl Haidle. Daryl and Kevin are brothers and Scott is their brother-in-law. Taylor is Kevin's son.[/caption] 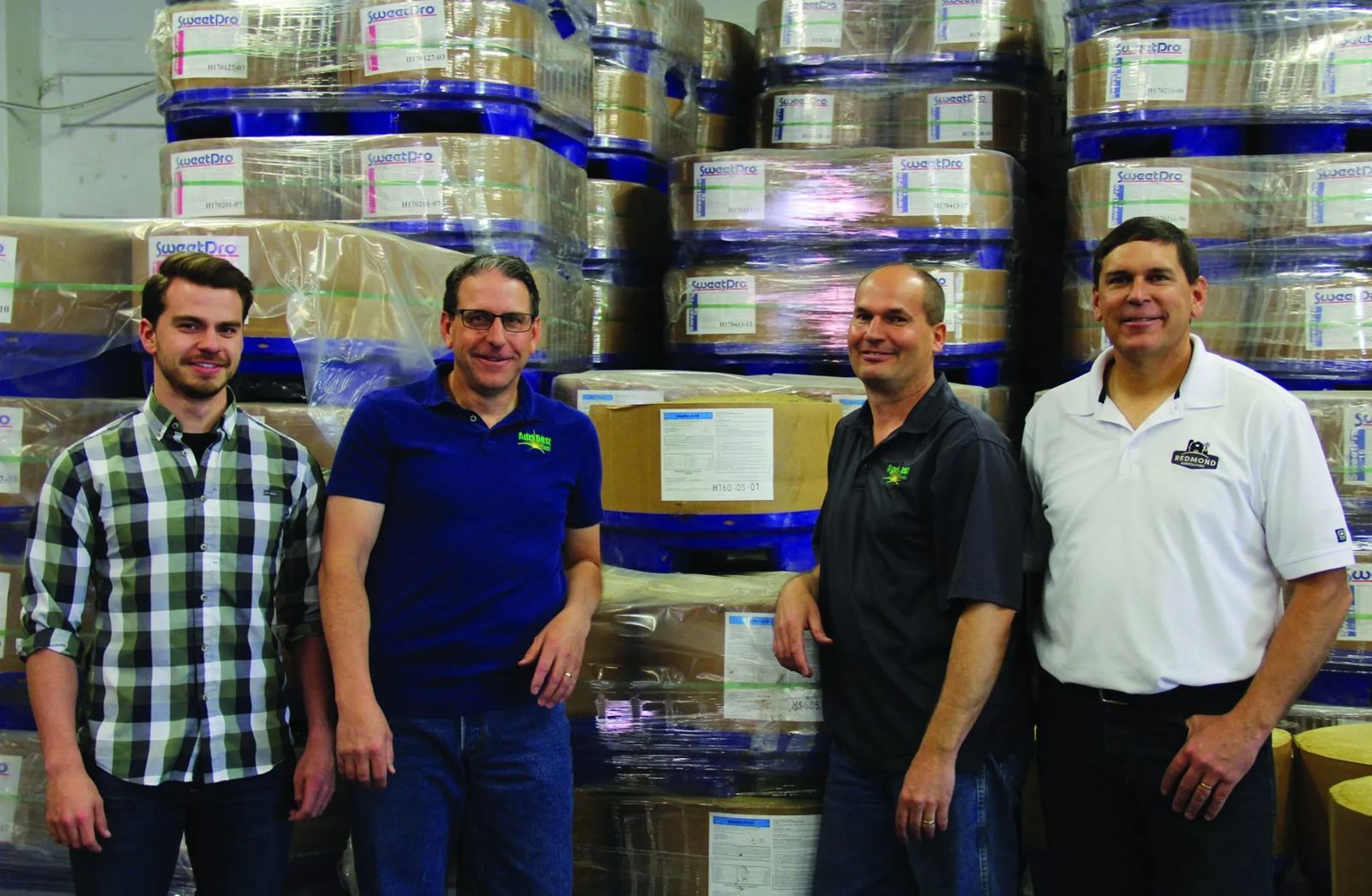 Thornberg, the founder of SweetPro Feed Supplements, says Irv Haidle was a man of great character.

“You can certainly see the reflection of that character operating in the whole family,” he says. “There’s only so many hours in the day, and if you’re working with good people, those hours are better. And the Haidles are good people.”