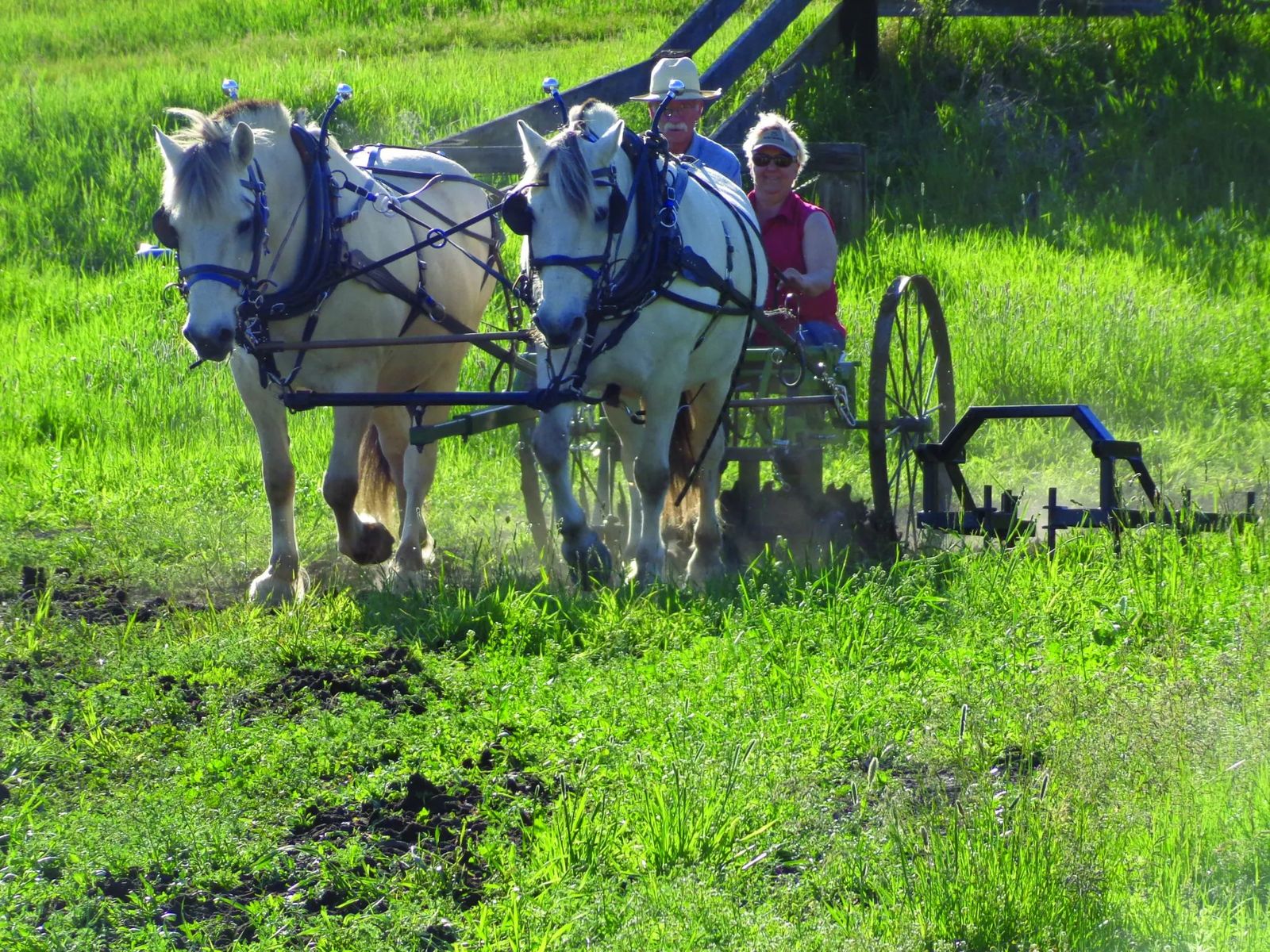 Reviving the Horse Power of Montana

Once or twice in a lifetime, we get the rare opportunity to meet the humble master of a craft, an enigmatic person with worlds of knowledge and experience to share. Doc Hammill is one such teacher.

I met Doc about 10 years ago, in the middle of a dusty round corral on the Blackfoot Reservation in Northwest Montana. I was a young 20-something, volunteering my time and dreams to an equine therapy program for troubled Native American kids. Doc was a retired veterinarian, volunteering his knowledge to the health and well-being of the horses in the program.

I was struggling with a young, feisty Mustang stud just brought in off the range. We called him 'Red Boy', for his bright, beautiful, strawberry roan coat. He hadn't been handled, much less haltered, and my job was to get him ready for Doc's arrival that afternoon. 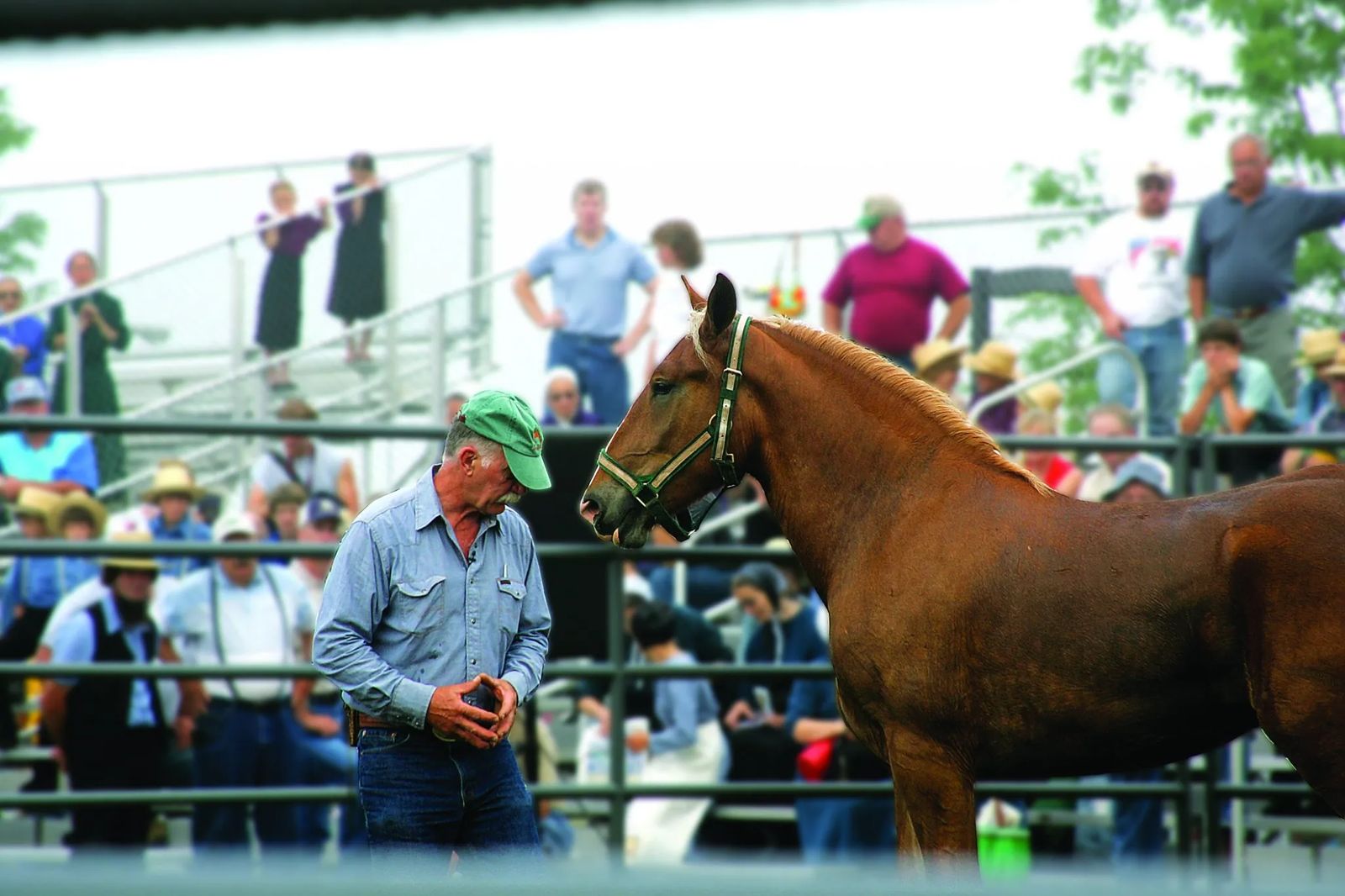 Red Boy wasn't an ill-tempered little horse, but he was very smart. He had worked up quite a few brilliant schemes to evade attempts to be caught, and he seemed to enjoy the game thoroughly.

As I stood in the middle of that round pen, a howling wind swirling the dust around my feet, I noticed a regal, and somewhat grizzled, man approaching. His demeanor was gentle and deliberate, like you'd expect from the finest of yesteryear's horsemen. He certainly had a purpose, but was in no big hurry to get there. His weather-worn hat was cocked on his head just so, casting a shadow on his immaculate white mustache. He sidled up to the fence and peeked between the wooden rails at Red Boy and me, as we stood in mutual frustration on opposite sides of the pen.

“That little mustang already knows everything he needs to know about the world,” he said, nodding toward the colt. “If you'd like, I can show you how to convince him that you're worth knowing too.”

And so began a real education in horsemanship for me that day, rendered by a sagacious, gentle horseman affectionately known as 'Doc'.

Doug “Doc” Hammill was born in Iowa, in the years at the end of World War II. When he was 5 years old, he saw a couple of elderly ladies selling vegetables door to door with a one-horse buggy, a moment which defined the trajectory of his life. “When I saw that horse and buggy, and those old ladies driving up and down the street with their vegetables, I thought 'That's what I want to do. I want to drive horses and do real work with them someday,'” he says, fondly recalling the encounter.

A few years later, his parents relented and bought him a pony. “Neither of my parents were horse people, but somehow I talked them into a horse by the time I was 8 or 9,” he says, laughing. “We got a Welsh pony, and I eventually got him to pull a cart, which is quite a story in itself.”

He settles back in his seat and tells a tale of his youthful bartering efforts, with which he managed to convince some neighbors to give him a small, bedraggled garden cart. “It was just an axle with wheels, with a flat platform and no sides. It had no tongue of any kind, so I took some pine 2x2's and nailed them on, stuck them through the stirrups on my little saddle, and extended my regular reins with baling twine. I had no knowledge of whether or not that pony had ever pulled a cart in his life! I jumped on there, standing up like Ben Hur, and off we went. Believe it or not, it worked for quite a long time!”  Eventually, he graduated to a real harness and wagon.

As a young man, with a few jobs at animal clinics already under his belt, Doug Hammill was accepted into the veterinary program at Iowa State University. After graduation, he became “Doc” and landed his first job in Whitefish, Montana at a local veterinary clinic.

It was around that time that Doc met Tom Triplett and Addy Funk, a pair of seasoned master horsemen and teamsters. Under their patient mentorship, Doc was initiated into the vanishing art of draft-horse power, and the nuanced knowledge required to work with these gentle giants. He maintains the tradition on his ranch in St. Ignatius, Montana, where he holds regular workshops for people interested in learning the trade. 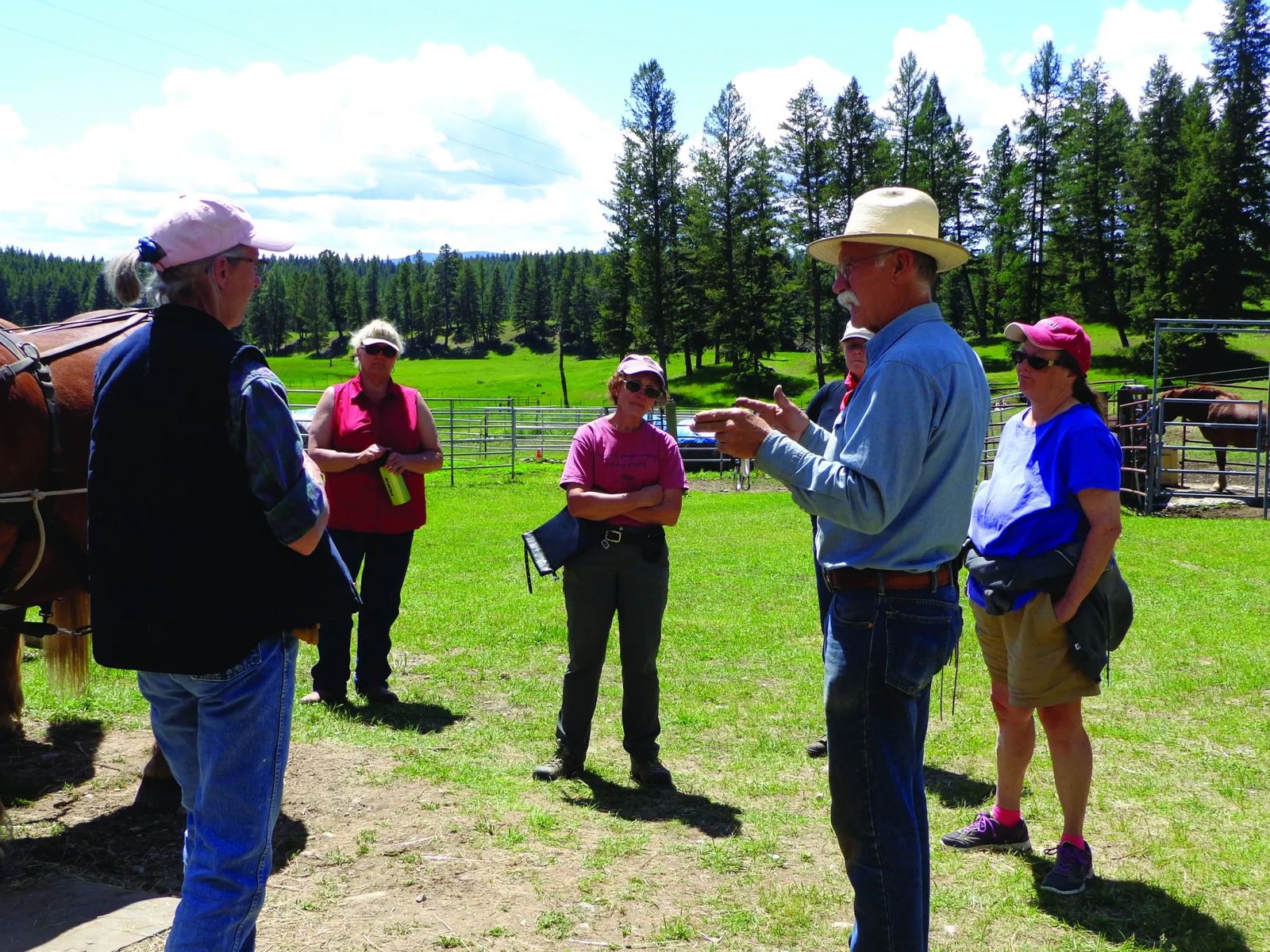 Working with horses was, until relatively recently, an essential skill for most people. For hundreds of years, before the introduction of the diesel engine and tractors run by petroleum, America depended on horses, mules, and oxen to power the equipment necessary to feed the nation. In those days, the typical farmer was able to feed about fifty people, with nothing more than his own fortitude, and the sweat of a good team of horses.

At the onset of the industrial revolution, horses were replaced by tractors, and many of the majestic draft breeds fell into rapid decline. Now, however, there is a revival afoot. Doc Hammill's ranch in St. Ignatius, Montana is now one of “about 400,000 operations in North America that use draft horses,” estimates Lynn Miller, editor of the Small Farmer’s Journal.

“You would be amazed at the movement that's underway!” Doc says. “When I started doing my workshops in 1998, about 80% of the people who came were learning for recreation or pleasure, or to start a carriage business, while only about 20% were serious about farming with horses. While we do still see quite a few folks interested in pleasure driving, those numbers have reversed, so that now about 80% of our students are interested in organic farming with horse power. They are on small acres, farming intensively, and the horse is the ideal alternative for them.”

Doc's partner in life and business, Cathy Greatorex, concurs. “There are so many people that are wanting to bring horses into their organic farm operations these days. Some are small, some are large. We even had one couple come to our workshop looking to farm their 2,000 acres, at least in part, with horses. It's been really fun for us to get involved in helping people achieve these dreams.” 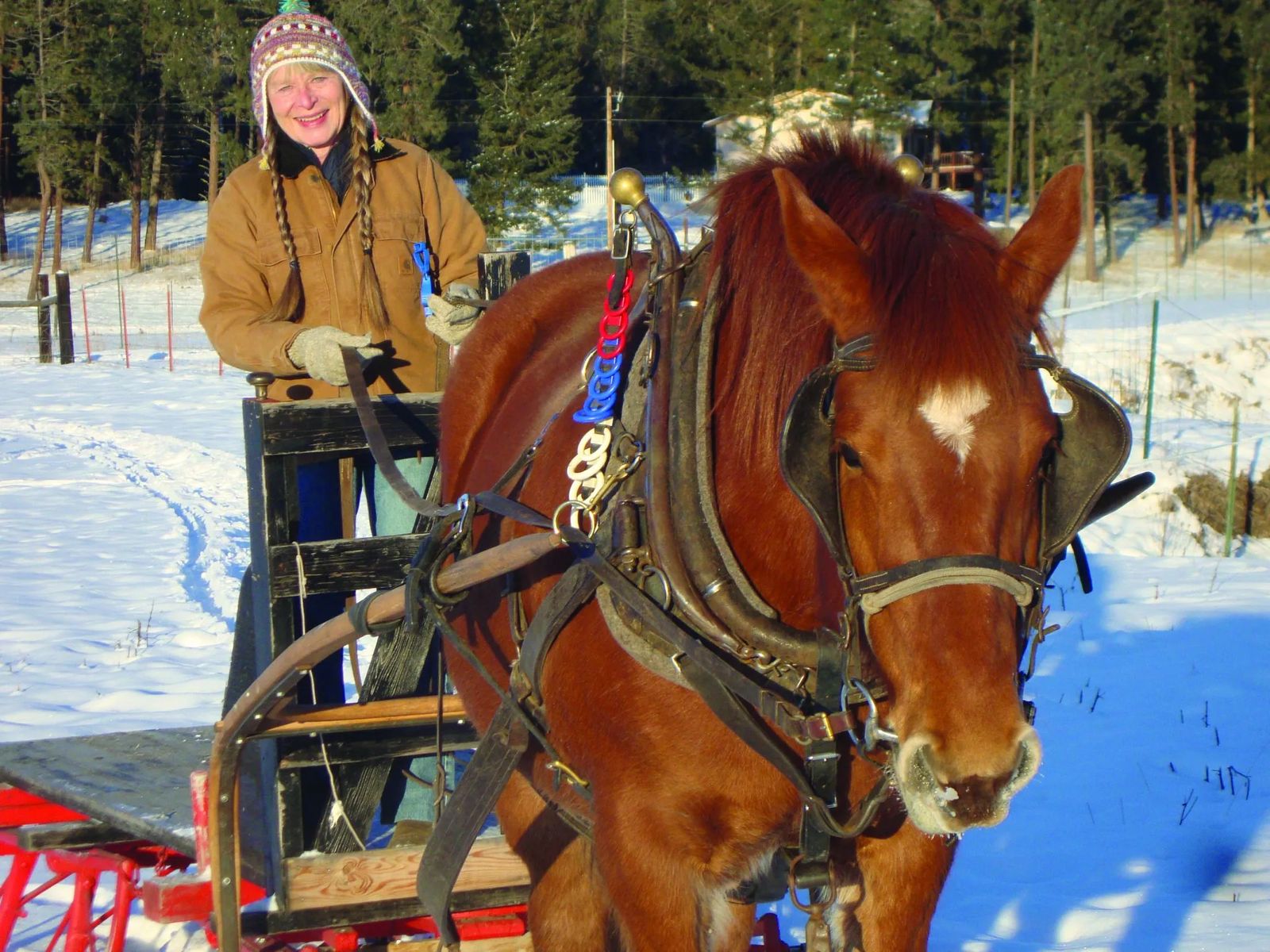 Doc says, however, that it would be a mistake to look to horses to replace large-scale industrial farm equipment. Instead, they should be viewed as close partners in the enterprise, rather than simply replacements for machinery. He cautions, “You have to want horses in your life. It's not like going out and buying a tractor to get the job done. If you don't want to interact with horses closely, to have relationships with horses, then I don't encourage it.”

Even today, Doc feels that producers have a lot to learn about working with the horse. “We're still in the dark ages, as far as I'm concerned, in truly understanding and effectively communicating with horses in ways that they inherently understand and willingly accept. They are extremely emotionally delicate, perceptive creatures.” He explains that, to be successful in a working partnership with horses, a person needs to have “a deep understanding of the subtleties of the true nature of horses, their social dynamics, and their way of communicating.”

In their workshops, Doc and Cathy teach students the fundamentals of driving a team of horses and partnering with horses to work the land, but place even greater emphasis on the cultivation of a proper mindset. “If you put your spirit into it, you can really have amazing results,” Doc explains. This idea, he feels, is the defining principle of his life's work. 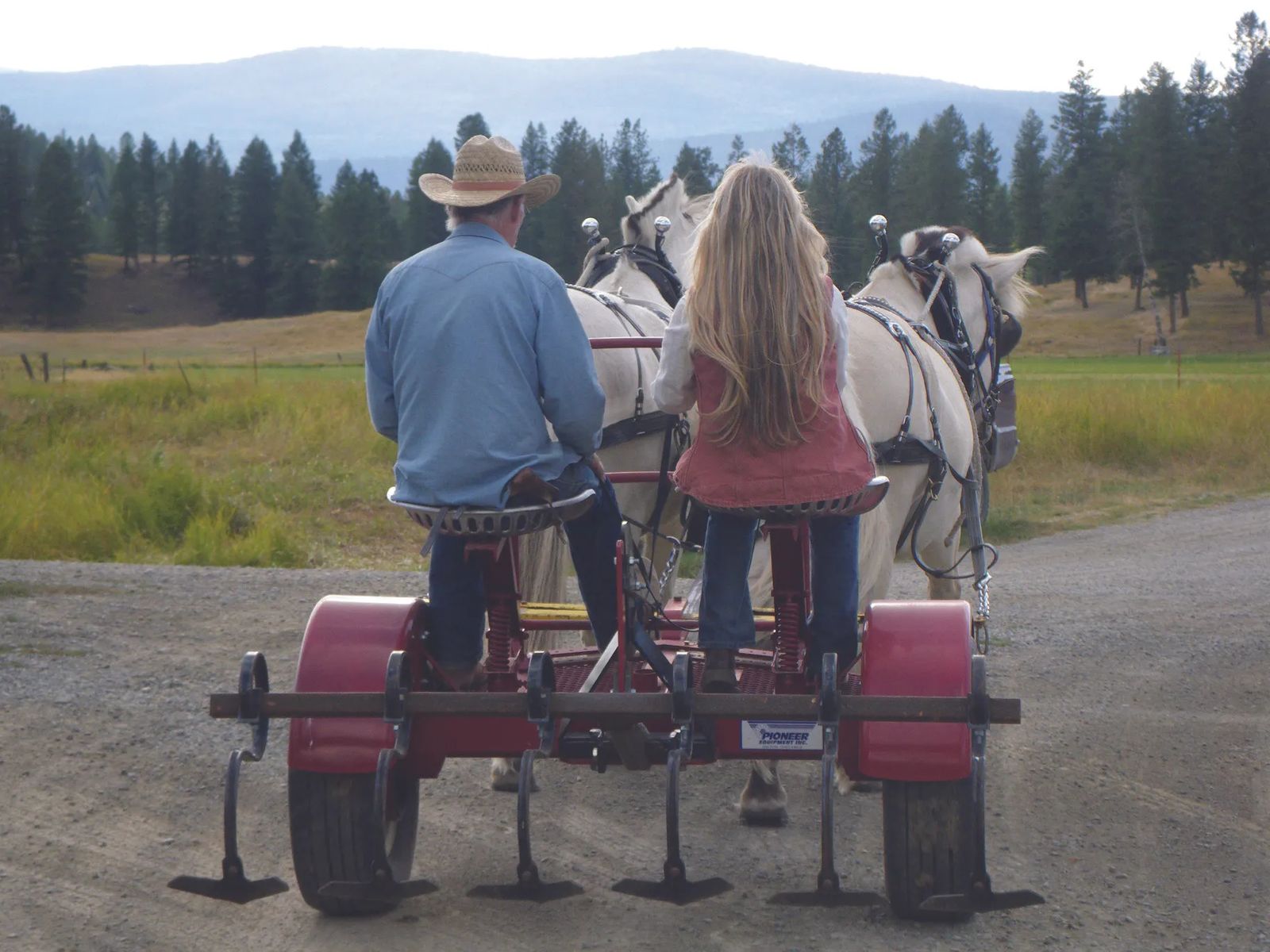 He knows bringing horses into a farm operation has the potential to offer a new perspective on farming, and to enrich the lives of the people making that leap.

“This isn't about me”, he says. “I used to just teach people how to work horses in harness, but that has evolved. Now, it's much more than that.” He pauses thoughtfully. “I've discovered that when people learn how to truly understand horses, it changes their lives, not just in their work with horses, but also their relationships with people, and the world. That's what this is really about.”