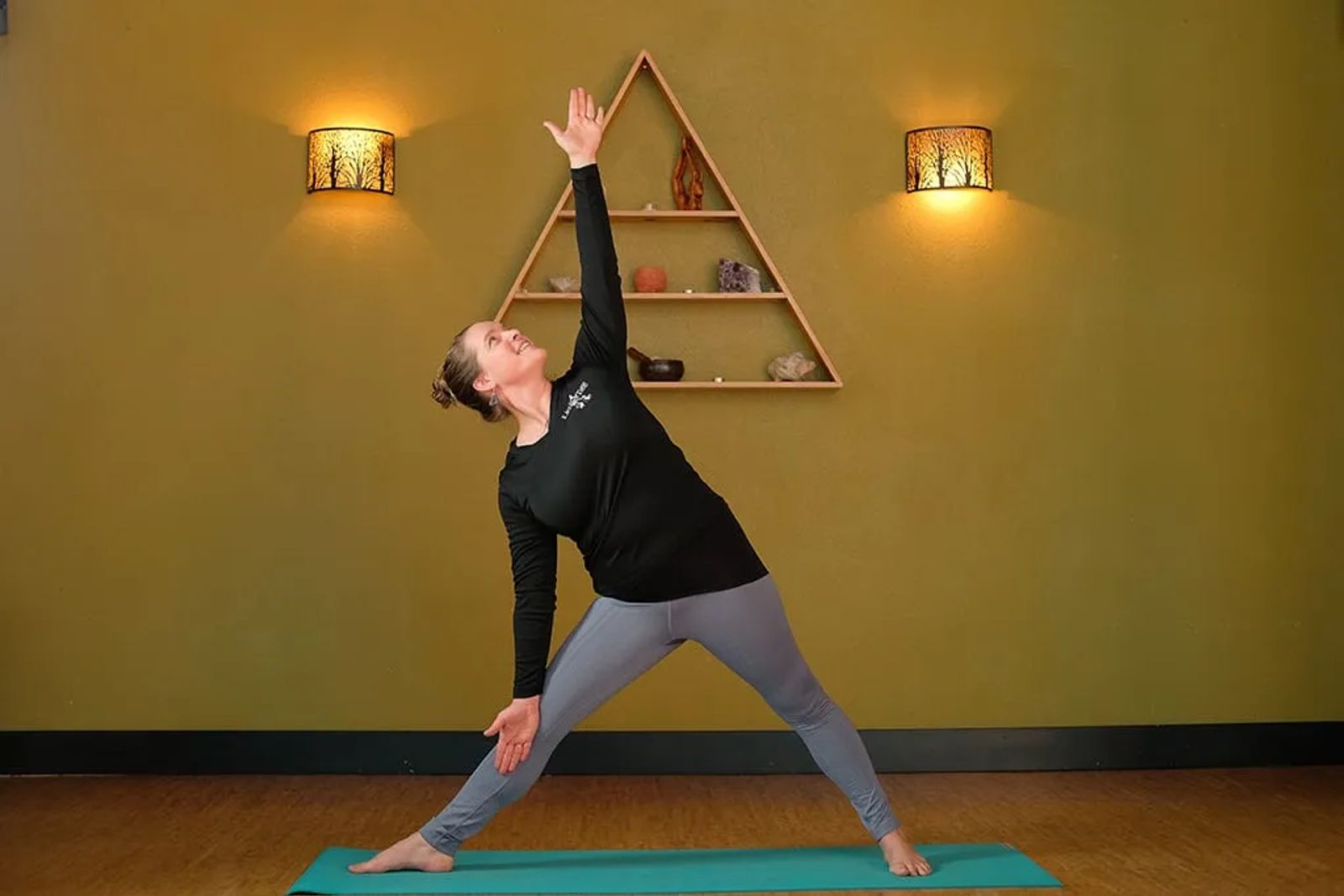 A Lesson in Bending, not Breaking

When Sharli Ziebarth first unrolled a yoga mat at the Billings YMCA, she was 22 and looking to relieve some pain she’d been experiencing during her pregnancy. That day, she had no idea she was starting a journey toward self-discovery, healing and entrepreneurship.

Eleven years later, Sharli is the owner of Limber Tree Yoga Studio, located downtown. She’s owned the studio and taught there since it opened in 2012, and this fall she’s set to open a second location on the West End at Shiloh Commons, on the corner of Central Avenue and Shiloh Road.

At Limber Tree Yoga Studio, Sharli and her staff are committed to providing an authentic yoga practice, one that explores the restorative power of breath and movement. She also offers aerial yoga, prenatal yoga and a couple of dance classes. 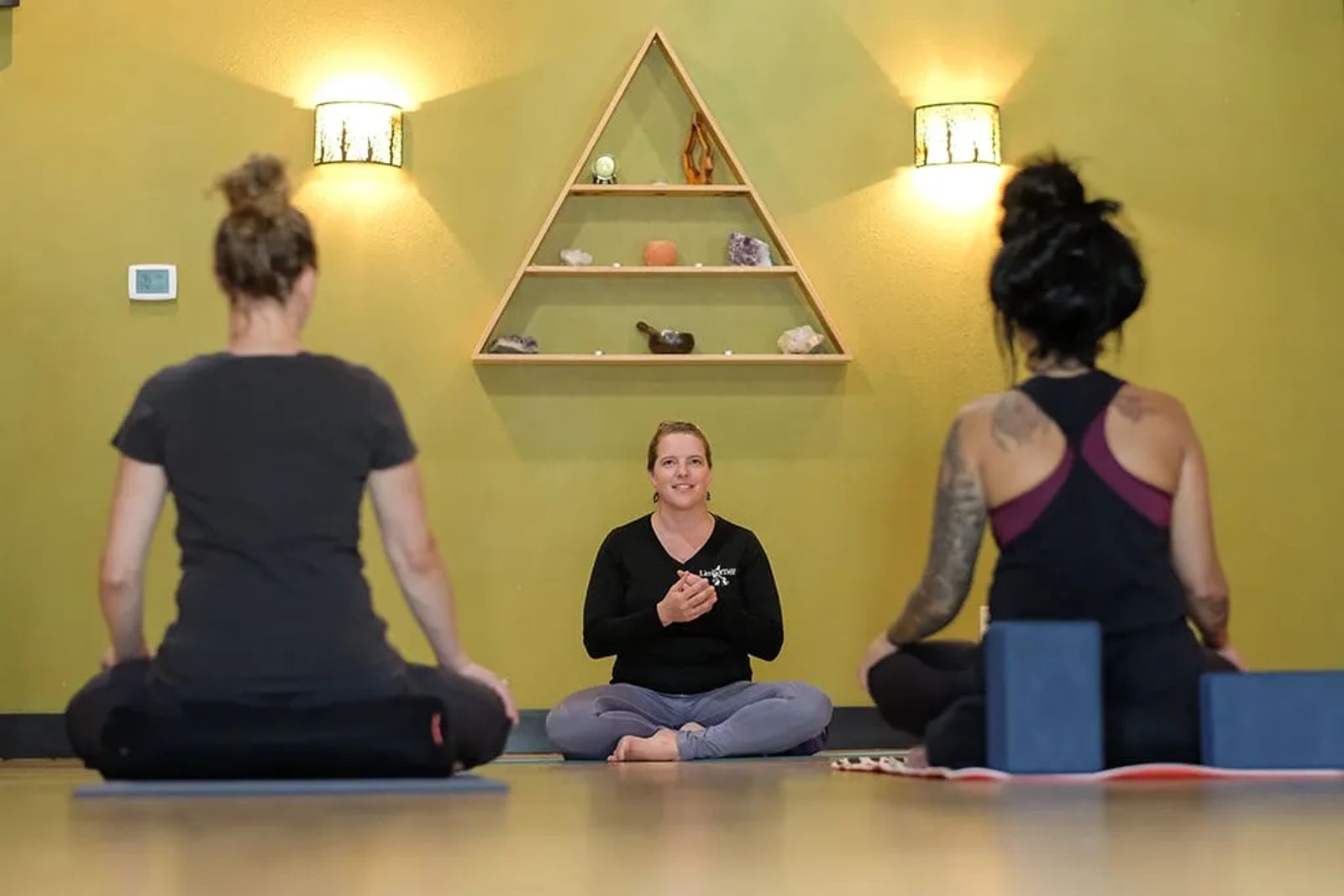 In those early sessions, yoga was presented to Sharli in a way that beautifully combined breath, movement and meditation. As she moved her body, the pain went away, and in a quiet, contemplative state, an inner healing started to happen as well.

“It changed who I was as a person and not just in my physical body,” Sharli says.

Sharli was just starting out in a career in finance, but when her daughter arrived she stepped back from her work. Two years later, her second child arrived, a son, and she continued to practice yoga throughout her pregnancy. About that time, she decided she wanted to earn a yoga teaching certificate and share yoga’s powerful benefits with others.

“I wanted to dive a little deeper in my practice, and I was looking for a career change,” she says.

From student to teacher

In those days, there were no local classes for teacher certification. The closest reputable program was in Bozeman, which wouldn’t be easy for this stay-at-home mom of two young children. She needed a program that was affordable and worked for her family. Sharli finally settled on a course in Eugene, Oregon, at the Holistic Healing Center of Yoga and Tai Chi. The course was 12 days in the fall and 12 days in the spring, with individualized lessons in between that she could do from home.

“It was an extremely life-changing experience that helped me discover who I was,” she says.

After earning her teaching certificate, her personal practice took off. More than ever she was drawn to share yoga with others.

“Every hour on my mat was a time for exploration,” she says.

Huge transitions followed, transitions described by Sharli as “transformative and painful.” Through her yoga practice, she worked through past traumas. In this tumultuous time, her marriage dissolved, though she and her husband remained partners in parenting their two young children.

“Whether you like it or not, yoga forces you past this physical aspect to experience who you really are,” Sharli says. 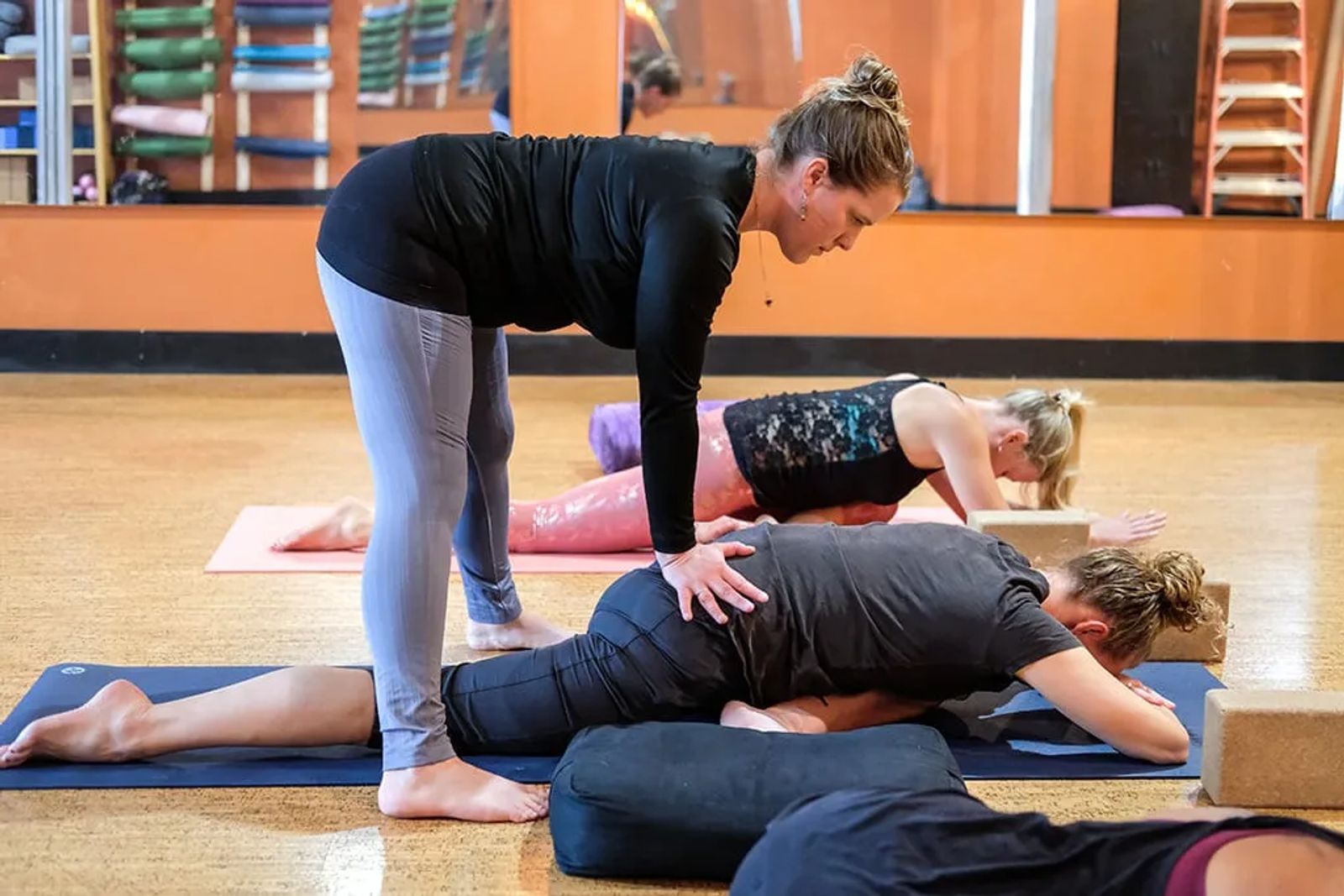 From teacher to business owner

Shortly after certification, Sharli opened Limber Tree Yoga. Her focus from the start was to provide an authentic yoga experience that focused on breath and movement in a comfortable, relaxed studio space where all are welcome.

There were many people in her life who were critical of her decision to open a studio, Sharli says, but those who knew her best were supportive. She also received some push-back from the yoga community, which didn’t favor a new, inexperienced teacher opening a studio.

“The beauty of it is that a lot of them later came to teach here and I got to learn from them,” Sharli says.

Initially though, Sharli didn’t have the resources to attract the best teachers. She had no marketing budget. Her classes were small and she didn’t know how to get new people through her doors.

“I ended up teaching 28 to 30 classes a week. I became physically, emotionally and financially exhausted,” Sharli says. “It took my love and made it a desperation. I was up all night worried about making rent. It was torturous.”

She persevered. In time, classes caught on through word of mouth, and Sharli found ways to attract experienced teachers. She added aerial yoga and other classes but always focused first on the traditional, authentic practice of yoga. Then, three years ago, Sharli earned her certification to teach classes for those aspiring to become yoga instructors. She’s certified by the Yoga Alliance, and this new facet of her practice and her business has spurred even more personal growth.

“Your students are teaching you every day what they want to be taught,” Sharli says. 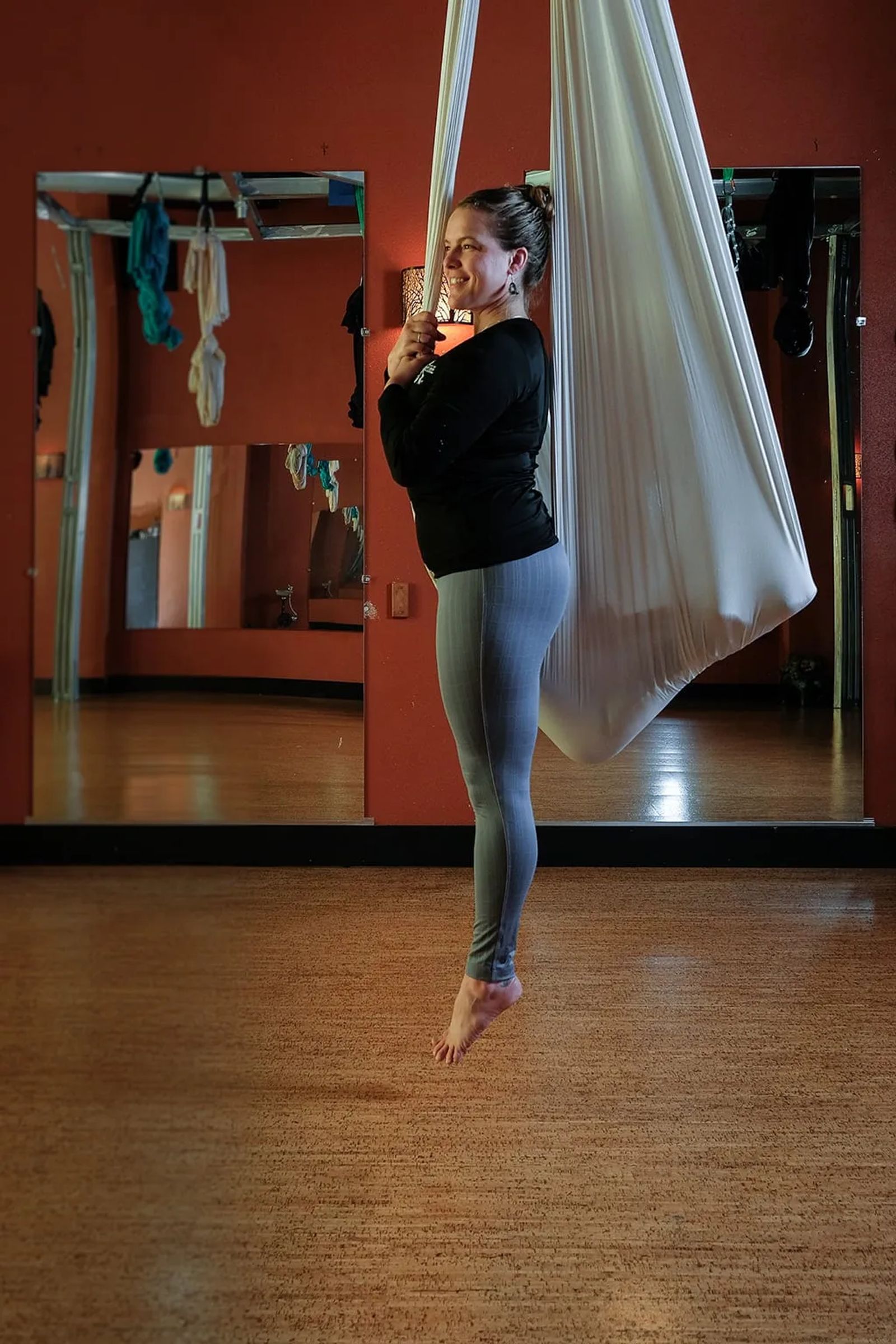 From the earliest days of Limber Tree Yoga Studio, Sharli was, like many business owners, thinking of ways she could expand her business. In her heart, she wanted to introduce yoga — the same yoga that changed her life — to others. On paper, her business needed to grow to remain financially stable. Looking back, Sharli says, the balance between the two was always a challenge.

She started to pay attention to what was inside herself and what was truly motivating her. What is fear and ego, or was it a desire to help others? Sharli says that when she turned her focus away from the bottom line, everything changed.

“The important things come out of a desire to serve others and a desire for self-growth,” she says.

She began to look for subtle hints — little things that were pointing her in a new direction. She focused on yoga and her deep desire to share it with others. Doors began to open and opportunities emerged when she began to measure success not by dollars but by relationships built at Limber Tree and by the community that had grown there. She looked for opportunities to serve others in ways that would help them grow.

“Through loss we know what success is to us,” Sharli says. 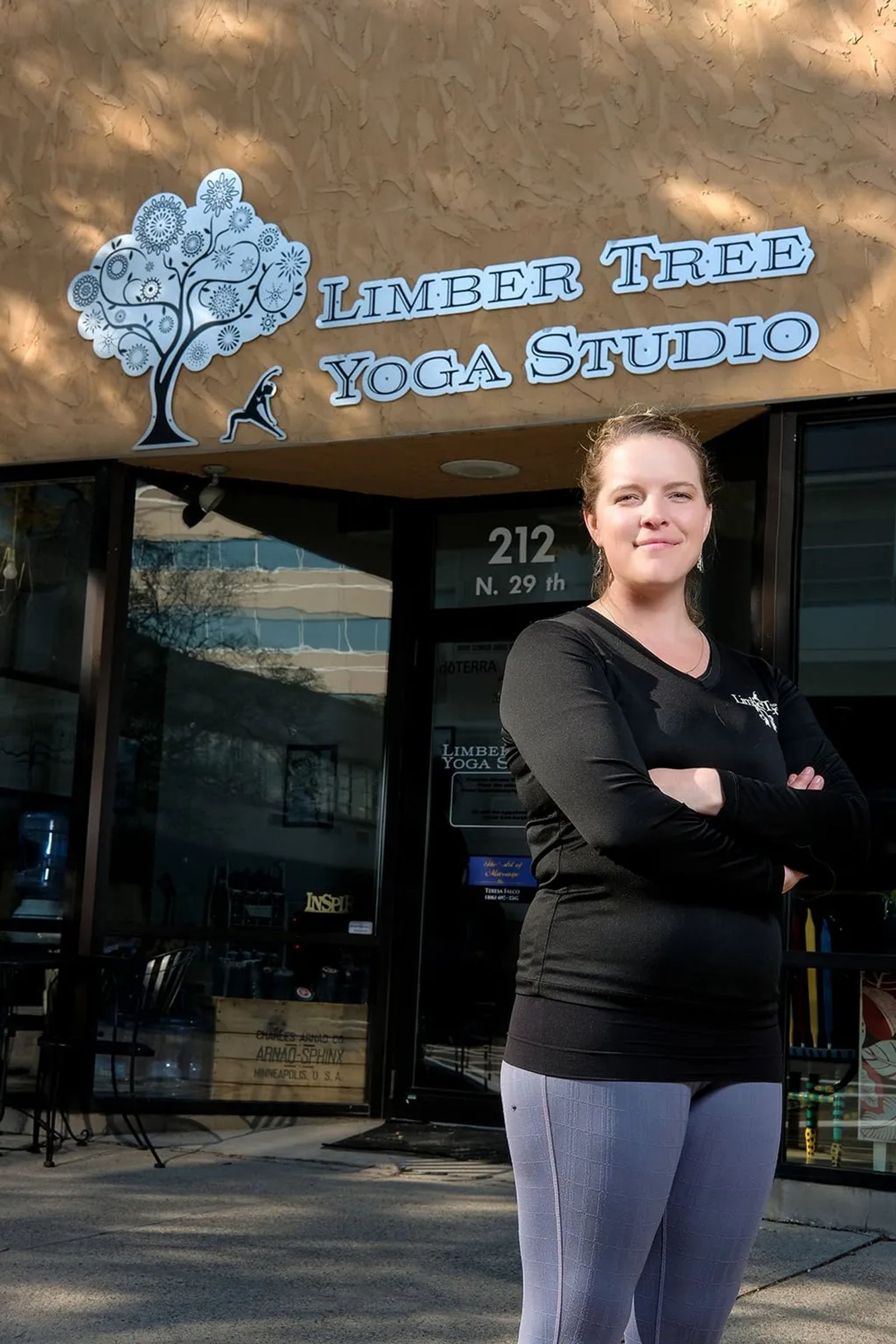 The new Limber Tree Yoga Studio on the West End is smaller than Sharli’s downtown space, but because it’s better designed, she expects it to accommodate similar numbers of classes and students. Like her downtown location, the new Shiloh Commons space will focus on the authentic practice of yoga — movement and breath — in a welcoming, relaxing space. She’s hoping that people new to yoga will feel comfortable there alongside people who have practiced yoga for years. She says one of her goals is to dispel the many myths about yoga — that you need to be fit, flexible and thin to practice it.

She has no plans to close the downtown location, which is the only dedicated yoga studio in the heart of the city.

“To me at this moment, this location, these are the roots and the people who come here are the foundational community that got this place started,” Sharli says.

Sharli considers the name of her business — Limber Tree Yoga Studio — and is reminded more now than ever of its meaning. She named the studio loosely after the limber pine, a tree that grows in the harshest environments at high elevations. Its flexibility ensures its survival.

“In my life there have been a lot of things that made me bend, but I wouldn’t let myself break,” Sharli says.