The Gift of Giving

Each year, Santa comes early to Columbus. But the gifts he bears embody more than a cascade of colorful toys. Rather, Santa’s early arrival brings a spirit of giving that captures the hearts of kids from all over Stillwater County.

The magic takes place on the first Sunday in December, when more than 100 local children descend on the Stillwater Pavilion. With two, one-dollar bills clenched in tight little fists, they eagerly eye tables laden with everything from stuffed animals to tool sets to candles to books. In this case, however, the gifts are for them to give – not to get.

The thought behind the special day, known as Kids-only Christmas Shopping Day, seems so simple. Gather enough gifts together – some donated, some bought – and let the kids pick and choose what they want to give as holiday gifts. The goal is to help children think outside themselves and shop the aisles for others.

“When kids start giving at a young age, they grow up to be giving,” says Tonya House, who participates by organizing a gift drive at Beartooth Ford, the dealership she owns with husband Wes. “And the best part is, they get to pick out what they want to give.”

Kids-only Christmas Shopping Day might be sponsored by Project Hope, the county’s thrift store and source of support for the area’s less fortunate, but any and all kids grades K through 5th can participate. Now in its fifth year, the mission is to instill that wonder of Christmas and help children to see the gift in giving. For parents, it's a safe venue for kids to shop and, just like Santa, check some people off their lists.

“It’s really important – that feeling of knowing what it means to give and make other people happy,” says Terri McDonald, who brainstormed the idea over a cup of coffee with friends. “I just want them to have that feeling.”

"When kids start giving at a young age, they grow up to be giving”
-Tonya House, Gift Drive Organizer

The nominal $2 charge allows each child to buy up to five presents – one for mom and dad and each of their siblings. It also instills the value of earning money to spend.

Parent Suzi Smith fostered the holiday spirit by having her daughters – Claire, 6, and Gracie, 4 – choose a few of their own possessions to sell on a local on-line yard sale.“I wanted them to figure out the money part,” she says. “So I gave them a few dollars from that.”

The charmed day actually begins months in advance, as Project Hope volunteers sift through donations. They shy away from clothing, but set aside unused items, boxed and like-new items. Donations of home-made baby quilts and hand-knitted hats and gloves add to the mix. When the holiday approaches, organizers Kathy Barrett and Dorothy Thomason take stock of their inventory and note any gaps. With cash donations in hand, they head to Billings to round out the assortment.

“It’s great to see those kids filling those bags,” Thomason says. “This one little girl, her eyes were so big and her grin was not going to stop for 10 years.”

Kids-only Christmas Shopping Day quickly outgrew the church basement where it began. Since then, McDonald’s idea has grown into a broad-based community event. Adult volunteers sign on to greet families, wrap presents or provide cookies and coffee for distracting the parents. 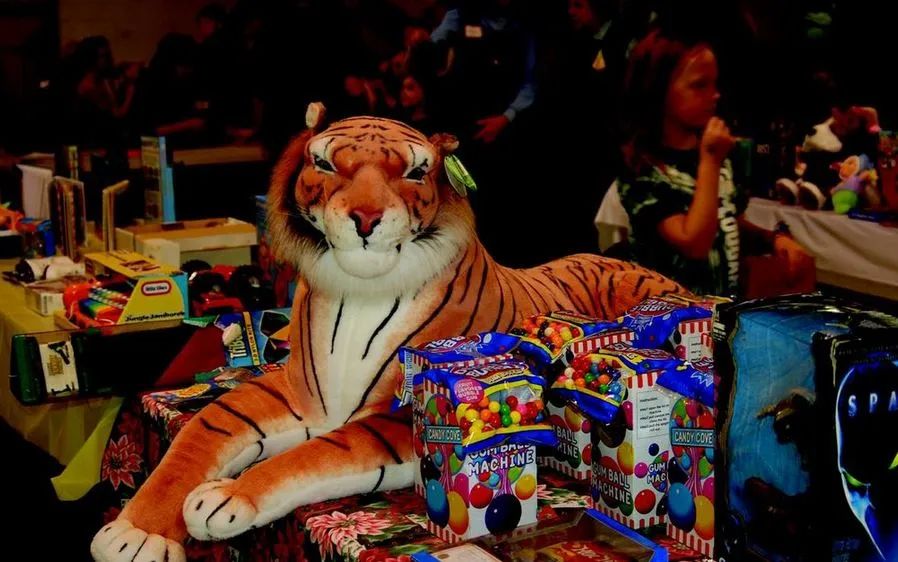 Older students, many of them members of local school organizations like Close Up and Key Club, sign on as personal shoppers to assist their young counterparts.

Even local businesses share in the enthusiasm. Montana Silversmiths donates inexpensive jewelry, packaged in the company’s signature blue boxes. Up the street, at Beartooth Ford, House holds her gift drive specifically for the event. She remembers stark Christmases as a child, when money was especially tight. And she’d like nothing better than to spare others the same. “That is something you never forget,” she says.

From a parent’s perspective, Smith probably loves the day as much as her daughters.

“They were so excited to shop by themselves,” she says. “And it’s a nice break for me.”  Smith also marvels at the quality of the gifts that her daughters have brought home. She is reminded of Kids-only Christmas Shopping Day every time she glances at the teapot on her kitchen counter. Last year, her daughters came home with a baby doll for their little brother and the teapot for their father.

“My husband doesn’t drink tea or coffee,” she says. “But they were so thrilled and they had reasons behind their decisions. We just look at it and smile.”