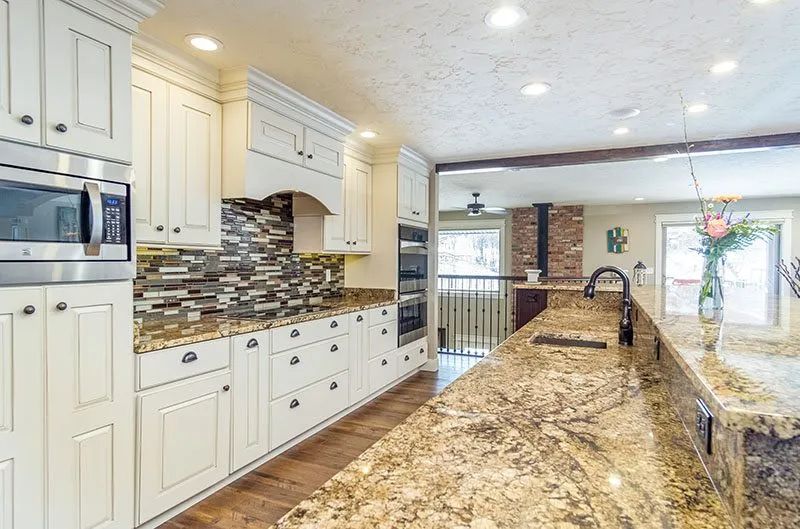 Step inside the Gertsch home

Chelsie and Jake Gertsch knew that living in town — in a subdivision — wasn’t exactly their idyllic spot for putting down roots. They desired to raise their children in similar fashion to how they had been raised. “Chelsie grew up in the country (between Billings and Shepherd) and I grew up on a dairy farm in Utah,” says Jake, sales manager for Auto Auction of Montana. “I had to wonder, ‘How did I end up in a subdivision?’”

It was due in part to Chelsie’s grandpa setting the two up on a date at some point. “Then I came to Billings to finish (college) at MSU-B,” explains Jake. The rest is history. Marriage happened, as did the subsequent move to the subdivision. 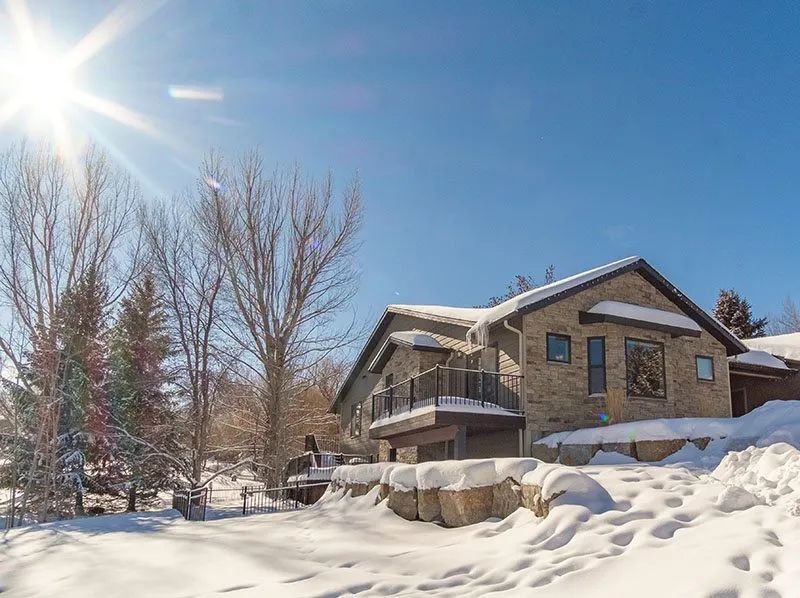 It wasn’t long before a particular property northeast of Shepherd caught the couple’s attention. It had been on the market for a couple of years. “We loved the place but the house was too small,” says Chelsie. “It was built in the 1970s and was about 2,000 square feet,” adds Jake. For a growing family, it seemed not quite roomy enough. However, they ventured back the following spring to take another peek.

“It was beautiful,” Chelsie says. Calling it the “awakening,” they quickly discovered the splendor of this pastoral piece of real estate, purchasing the nearly 20-acre parcel from its original owners.

The family lived in the old house five years, saving their money for a remodel. They moved back into Billings while the house underwent its major transformation, just in time for Chelsie to give birth to their fifth child. “I came out to the house every day during the remodel,” she says, “as the kids go to Shepherd school.”

The five years spent in the house gave Chelsie time to “brainstorm and sketch out” how she wanted their new space. This sketch was handed over to architect Travis McDowell of Bluewater Designs.

The drawing called for an open-design concept. The kitchen and living area had to be unified, yet, large enough for Gertsch-style entertaining. “I have five siblings,” shares Chelsie. “Four of them live here. One sister has five kids, one has four, and one has three. I love to cook and have big Sunday dinners.” 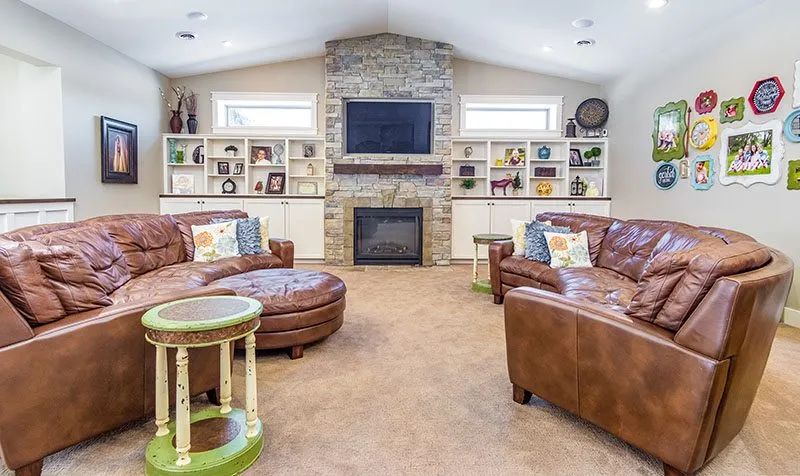 “This is the reason why we wanted the open area, and, we’ve accomplished all of that,” agrees Jake. “We have 30 to 40 people here for dinner, easy. We also hold community and church events with 150 people here in the summer. We have a hundred little kids that come for a big Easter egg hunt.”

Working with home builder Tony Neumann of Neumann Construction and Realtor for Neumann Realty, Jake laid out “four things” the couple considered must-dos: 1) reconfigure the garage as backing out onto the road is too dangerous 2) an entertainment area for large gatherings 3) visual access of the backyard so “we see what we moved here for,” and 4) a master suite.

“I tried to talk them out of it,” Tony recalls. “It’s easier to tear down and start fresh, but, it wasn’t in the cards! They wanted to live in that house. It was one of the stipulations. It’s always tricky to keep an old house with some structural issues looking and feeling like it’s all tied together.” 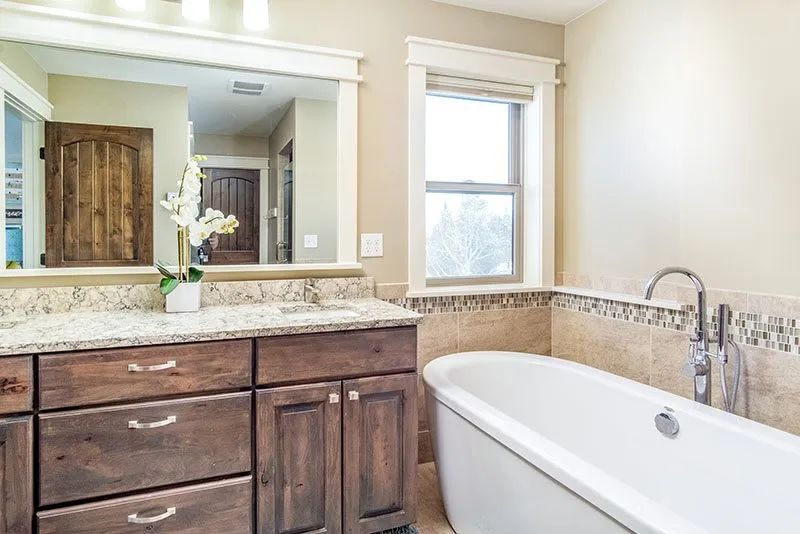 Since backing out of the garage onto a fairly busy road at the base of a hill was no longer an option, Tony peeled the roof off the garage. “We re-did the trusses to allow for new roof lines, built up the floor, and extended the walls upward.”

What was once the garage is now a spacious great room featuring a vaulted ceiling and majestic rock fireplace. Transom windows on either side nicely frame the towering fireplace. “You see the trees now,” Jake says. Built-in bookcases reach just below the high-rise windows. A mudroom sits off this expansive room and a new three-car garage no longer requires backing directly onto the busy road.

A single post in the great room that was actually the original corner of the house has been integrated into the design. It gives soft separation between the large living space and the kitchen area.

A pair of columns was added to tie-in with the original post. These columns separate the dining area, once the old sun room. “We also created false beams to incorporate a natural feel,” Tony says. “All of these details can be some of the more dynamic aspects of the house, making it more custom.” 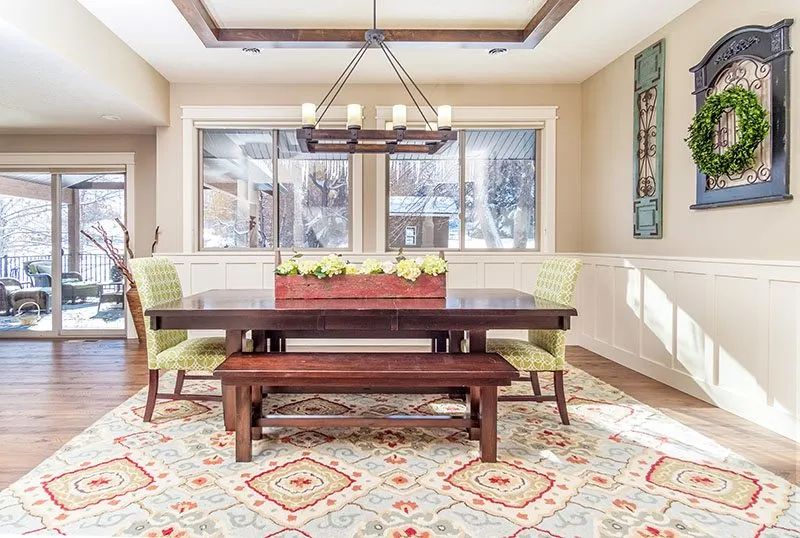 Best of all, “The old house is still here!” Tony says. “All the electrical and plumbing are redone and we’ve even added a back deck with timbers and vaulted ceiling. It flows.”

The two-level dwelling more than doubled in size to 4,200 square feet. Besides the great room, the addition also includes a fifth bedroom. Chelsie and Jake now have their master suite where they can watch the kids from the private balcony. Each of the three bedrooms on the main floor overlooks a pond that’s fed from a creek running through the property. It adds the crowning touch to this two-acre landscaped yard adorned with 80 mature trees. 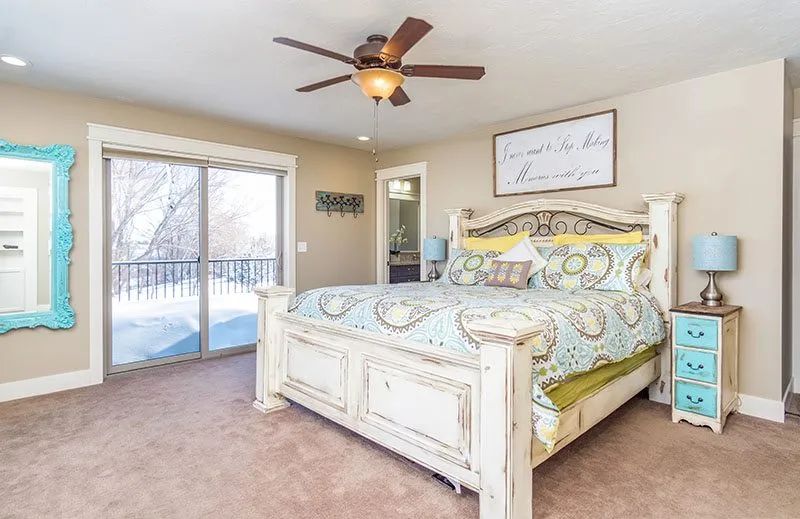 “Our kids camp in the yard and swim and fish in the pond. It’s a place for outdoor stuff,” Jake says. In the summer, a 120-foot slip-and-slide runs down the hill, plunging all risk-takers into the water. “The pond, the water, is key,” he says, nodding.

A large airy gourmet kitchen was created, as well. It swallowed what once was the tiny kitchen, along with a hallway and the front door. Chelsie loves to cook, so this new culinary space proves invaluable. 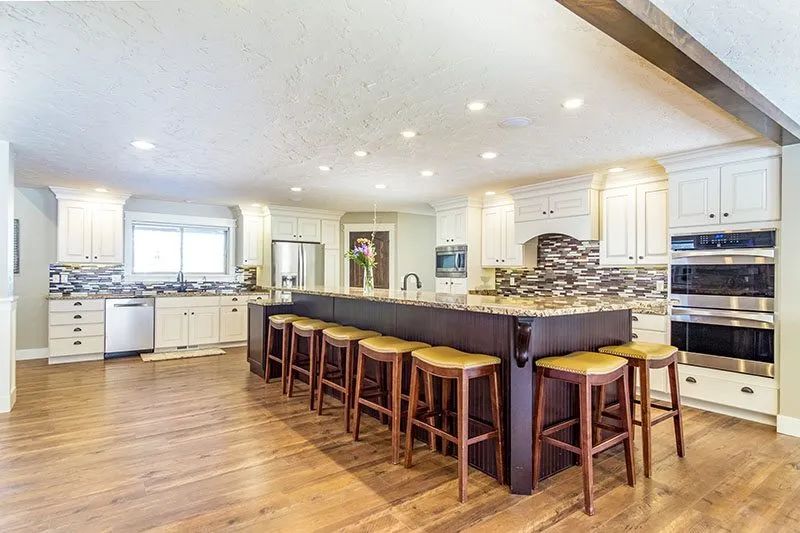 The entire perimeter features exquisite maple cabinetry from Kitchens Plus. They’re painted a pearl color and glazed. “They have a rub-through, giving them a worn look,” notes designer Vicki Ronan of Kitchens Plus. The plethora of light-colored cabinets contrasts prominently with the immense rustic beach wood island with the luscious color Java.

A massive two-tier granite counter top from Magic City Granite measures over 12 feet in length and 30 inches wide. It covers the island. “You wouldn’t normally see this wide of bar top,” Vicki says. “Chelsie knew what she wanted and Jake was adamant about making the bar top long so the kids could do their homework.  Tony built a special wall (support system underneath) for it.”

A prep sink sits in the lower level of this mocha/caramel-colored granite top. Across the kitchen is the stovetop with double wall oven on one side and a wall microwave on the other. At one end of the island is a pop-up shelf, neatly tucking away the Kitchen-Aid. “I wanted my pop-out mixer!” Chelsie says. Glass backsplash complements this trendy kitchen. A “clean-up station” on the far wall makes for a fine finish.

Laminate floring from Rich’s Flooring flows throughout the main living/kitchen area. It takes on the look of wood and it’s the perfect choice in maintaining this high traffic area.

There doesn’t seem to be any slowing down. The Gertsch family home remains busy with five kids, one foreign exchange student, four goats, two rabbits, a dog and three cats. “We’re happy we did this,” Chelsie says. “We use every square inch of our house. We have a lot of memories here. We love what we have.”

The old house stays with roots running deep. It reflects the memories cherished by the Gertsch family. “It was a long haul,” Jake says with a laugh, “but, we’re glad we did it. We have zero regrets.” 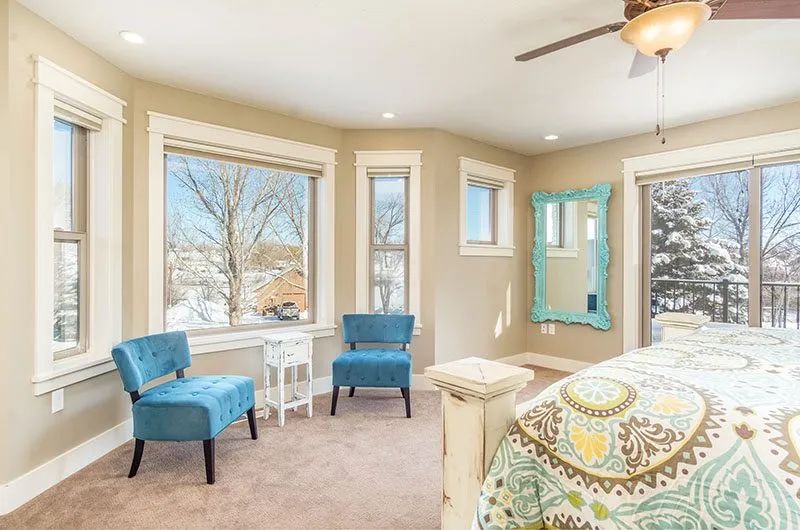 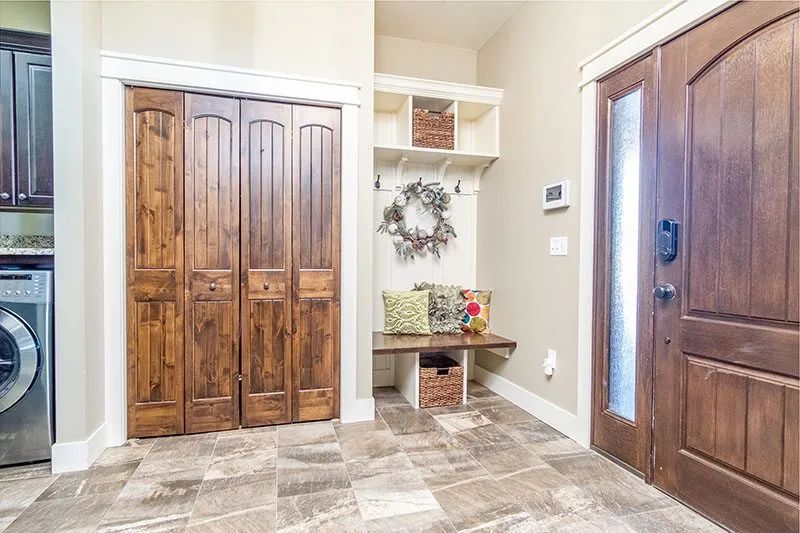 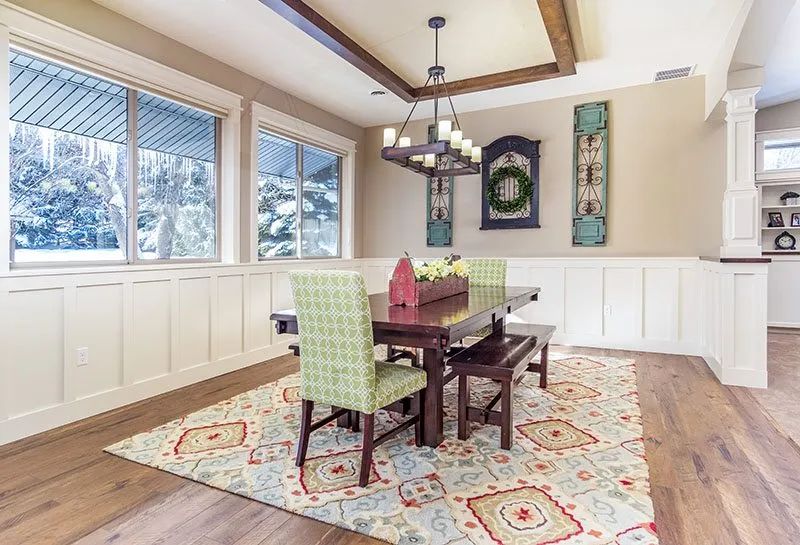 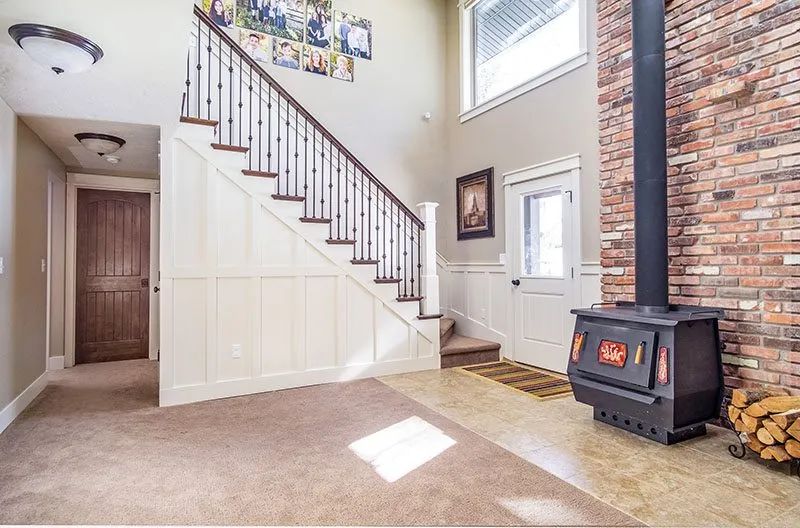