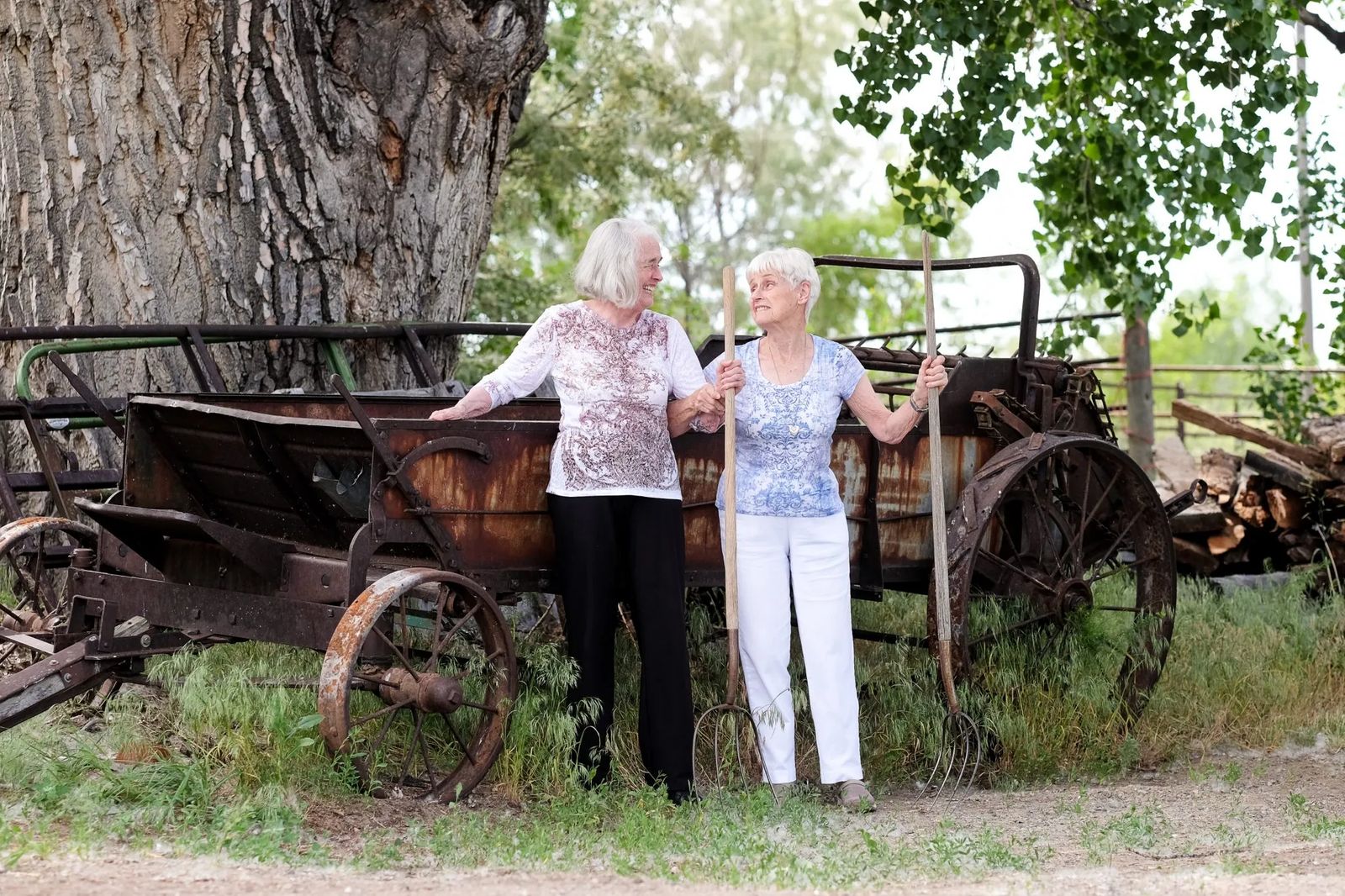 Emotions run high on this bright June morning as Jean Engle Dimich and Ilah Engle Larson arrive at the old Schwalger farmstead on Bitterroot Drive. The sisters waste no time in getting out of the car. In their early 90s, these energetic ladies are on a mission to revisit their past. Faces glowing with expectation, they’re about to step inside the neighboring homes of both sets of grandparents, homes they vividly recall from a bygone era.

As was the norm in the early 1900s, Jean and her younger sister, Ilah, were born at home. Their parents, Paulena (Lena Schwalger) and Arthur St. Clair Engle, lived on a farm just up the road from the Schwalger place. Within a mile lived the Engle grandparents. The close proximity of the three family homes made it ideal for the girls and their older brother, Jack, to walk or ride horseback to Grandma’s house.

In 1902, maternal grandparents Lawrence and Margaret Schwalger, made the trek to the U.S. with little to no money as German immigrants from Russia. They came with two children, a son Adolf, and a daughter Anna. Their third child, Paulena, Jean and Ilah’s mother, was born in Kansas. In 1915, they moved west to the Billings Bench and built the family’s homestead. “I came over every day,” says Ilah.  “We were here a lot,” says Jean, nodding in agreement. During that time, the sisters enjoyed a “very good childhood.” 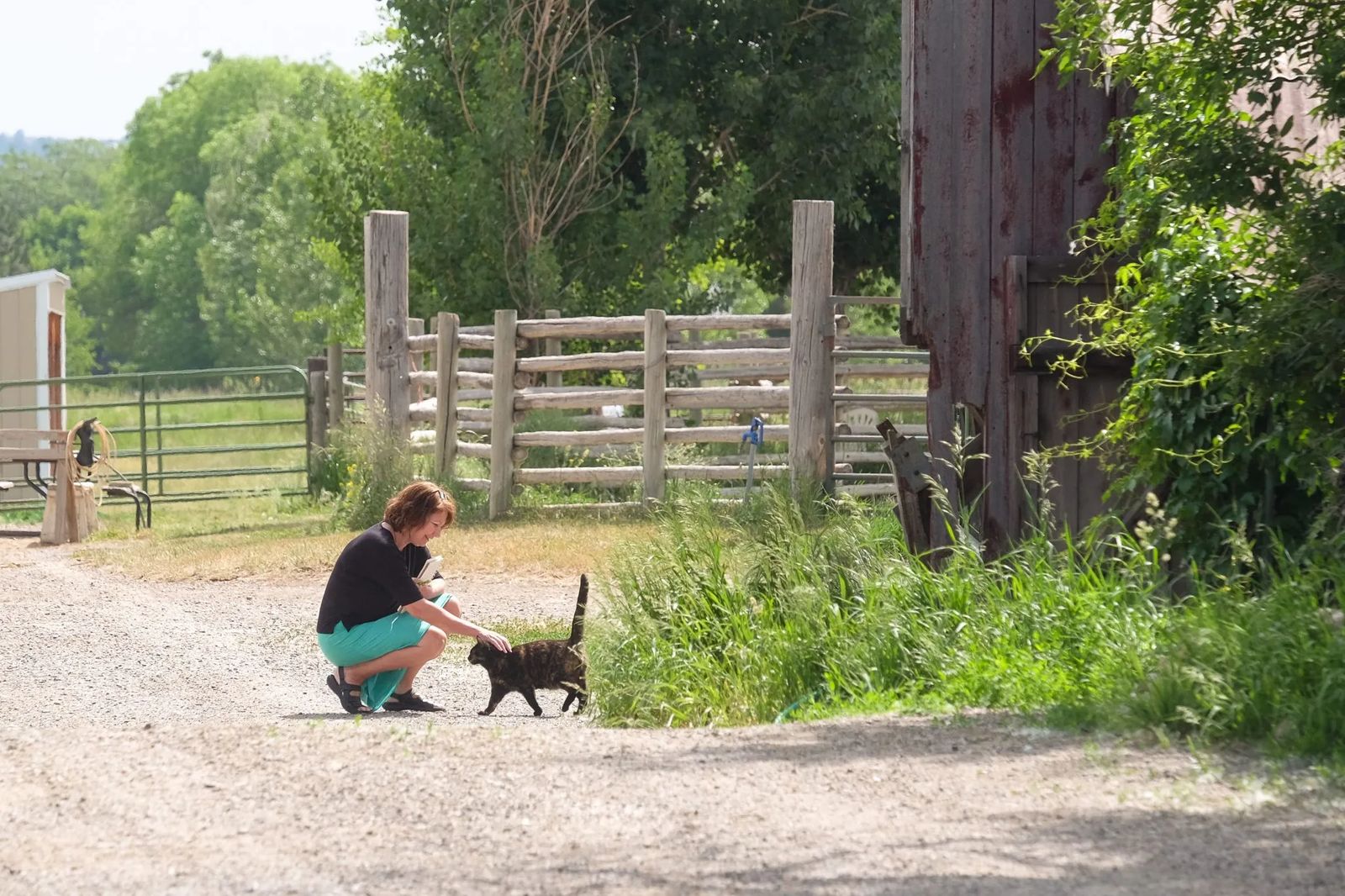 Jean’s daughter, Diane Dimich Gorder, organizer of this walk down memory lane, flew in from her home in St. Paul, Minnesota, while Ilah’s son, Scott Larson, helped his mom travel to Billings from her home in Roseville, California. It’s been seven long years since Jean and Ilah have seen one another and decades more since they’ve gone back to their roots.

Enormous cottonwood trees shade the century-old home that Jean and Ilah had played in as little girls. The sisters delight in remembering the huge red barn that still stands across from the house.  “The last time I was in the house,” recalls Ilah, “was about 1948 when I got married and left.”

Kathy and Doug Kirk currently own this 40-acre parcel. They operate it as a horse and cattle farm, similar to its function in simpler times. “It still has its Ag status as farm and ranch,” she notes. 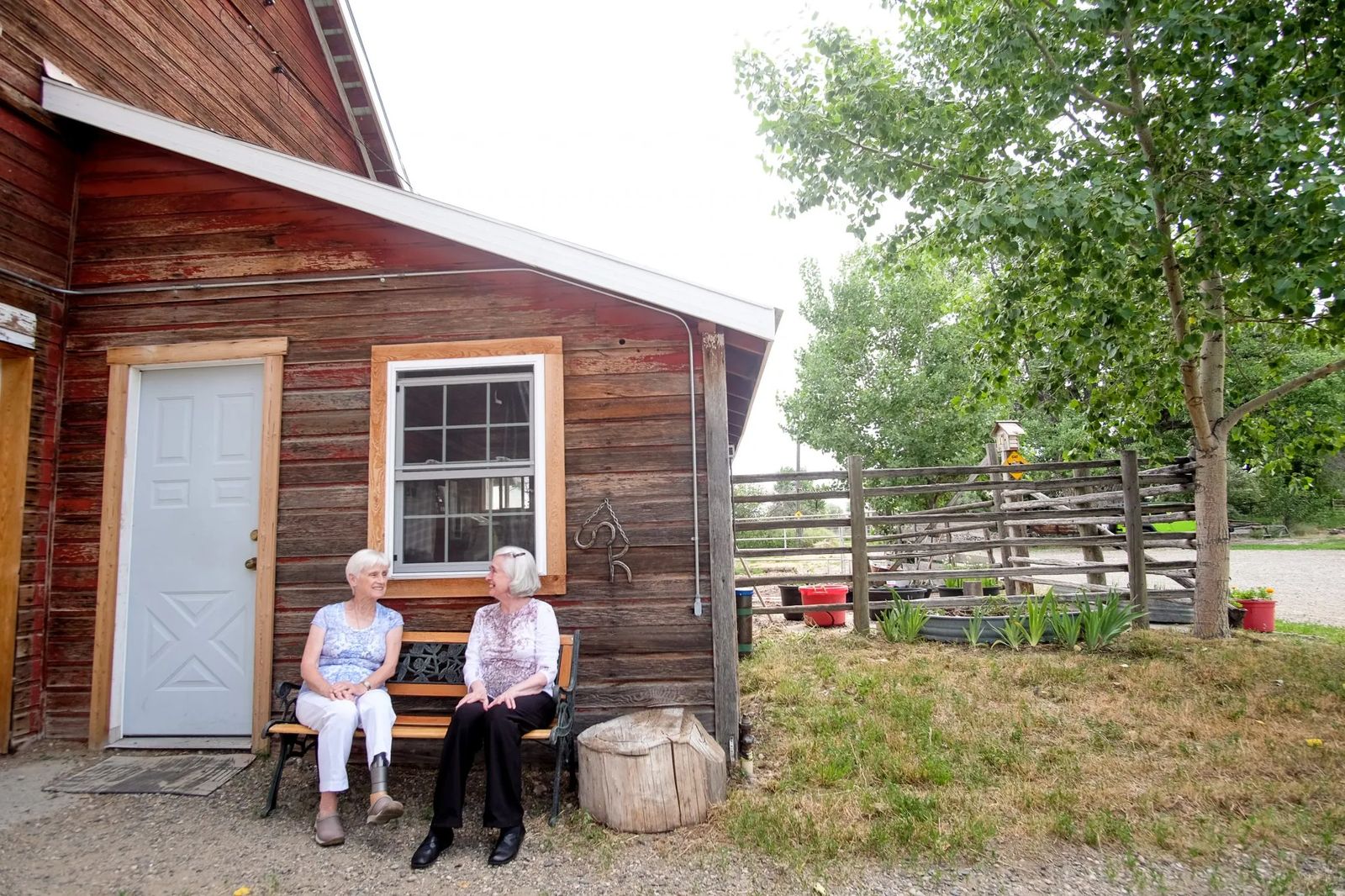 Birds chirp, flitting from tree to tree, as Jean and Ilah’s heads turn from side-to-side taking in the familiar sights as they walk up the path into the house. “This was the dining room,” gasps Ilah, gazing around what is now a large open living space. “Yes,” whispers Jean, “Grandpa used to sit there and play accordion,” Ilah adds.

A lively conversation ensues of what used to be located where as Kathy welcomes the ladies into the adjoining kitchen. A modernized sink and counter sit in the spot the sisters remember accommodating the “big wood-burning cook stove.” Heavy farm-style cabinets with flour and sugar bins have been replaced with contemporary, yet rustic, cabinetry.

With each turn in this charming two-story home, the memories come flooding back. “Workers would live in the house and eat here in the dining room,” shares Ilah. As they look out to the front porch, the sisters recount that “Grandma Schwalger,” who didn’t learn to speak English, would spend most of her days outside. “She worked in her garden every morning with her sunbonnet on, going up and down the rows,” demonstrates Ilah, bending over at the waist. “Then, when it was hot, she’d cobble (repair) shoes. People couldn’t afford to buy new ones during the Depression.” The sisters fondly remember the times each Sunday Grandma Schwalger reserved for sitting on the porch rocking. 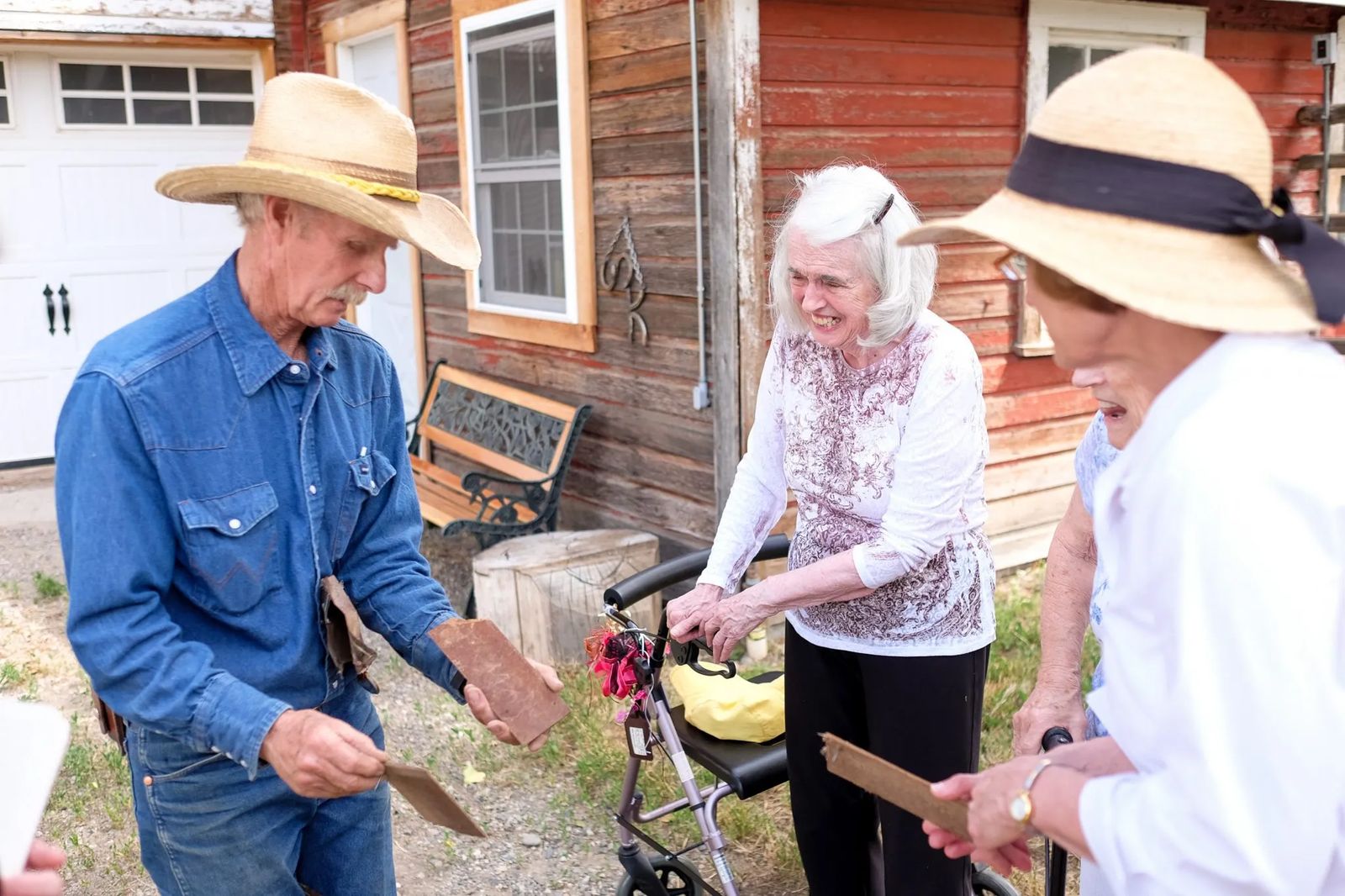 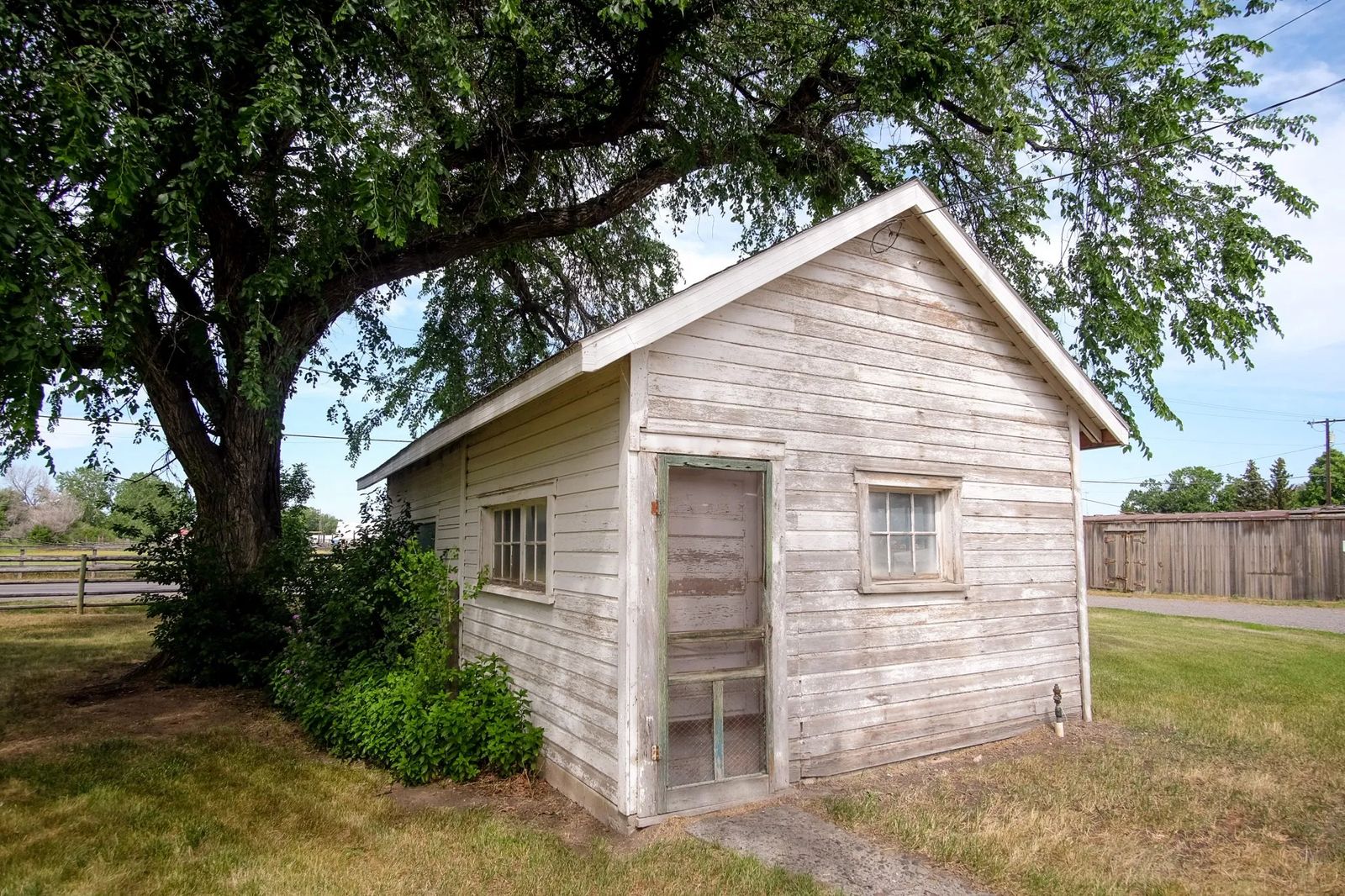 They giggle thinking back to “Grandpa Schwalger” making his own wine and beer in the basement and how he used to “stand downtown and talk horses.” He raised Percheron draft horses, as well as cattle. “Grandpa knew everyone,” chimed Jean and Ilah at the same time.

Good memories bubble to the surface like rich cream rising to the top. They talk about sleeping in the upstairs bedroom when spending the nights chattering in their grandparents’ home. Even though the sisters decline going up the stairs today, for now, it’s enough to cherish the love this special place holds for them. Jean and Ilah pause momentarily, searching the home’s layout as if searing it in their minds one last time.

Bidding farewell to Kathy and Doug, it’s time to journey up the road about a mile, passing by their childhood home, to experience the legacy of their paternal grandparents.

Turning onto the property once belonging to Arthur and Alice Virginia Engle, currently owned by Nancy Auren and Wayne Freisatz, the look and feel of a more traditional time eases any anxiousness. The gated courtyard overflows with lush foliage and lilac blossoms. Cotton floats in the air from aged towering trees. This picturesque estate seems to stand still as if cemented in time.

“Grandpa Engle built this,” Jean softly says, looking up to the two-story home. The magnificent structure resembles Moss Mansion in downtown Billings with its stone appearance. Wayne’s research on this dwelling confirms Jean’s statement that her grandfather, an Amish man originally from Ohio, “very adept at carpentry” had built it. “It’s what they call a ‘kit home’ from the early 1900s,” explains Wayne. “It’s probably a Sears, Roebuck and Co. home. It probably came on the train as the railroad was across the street. Then, it was assembled.”

The Engle home was “one of the first, if not the first, to have central heating, carbide lights, indoor plumbing and a telephone.” 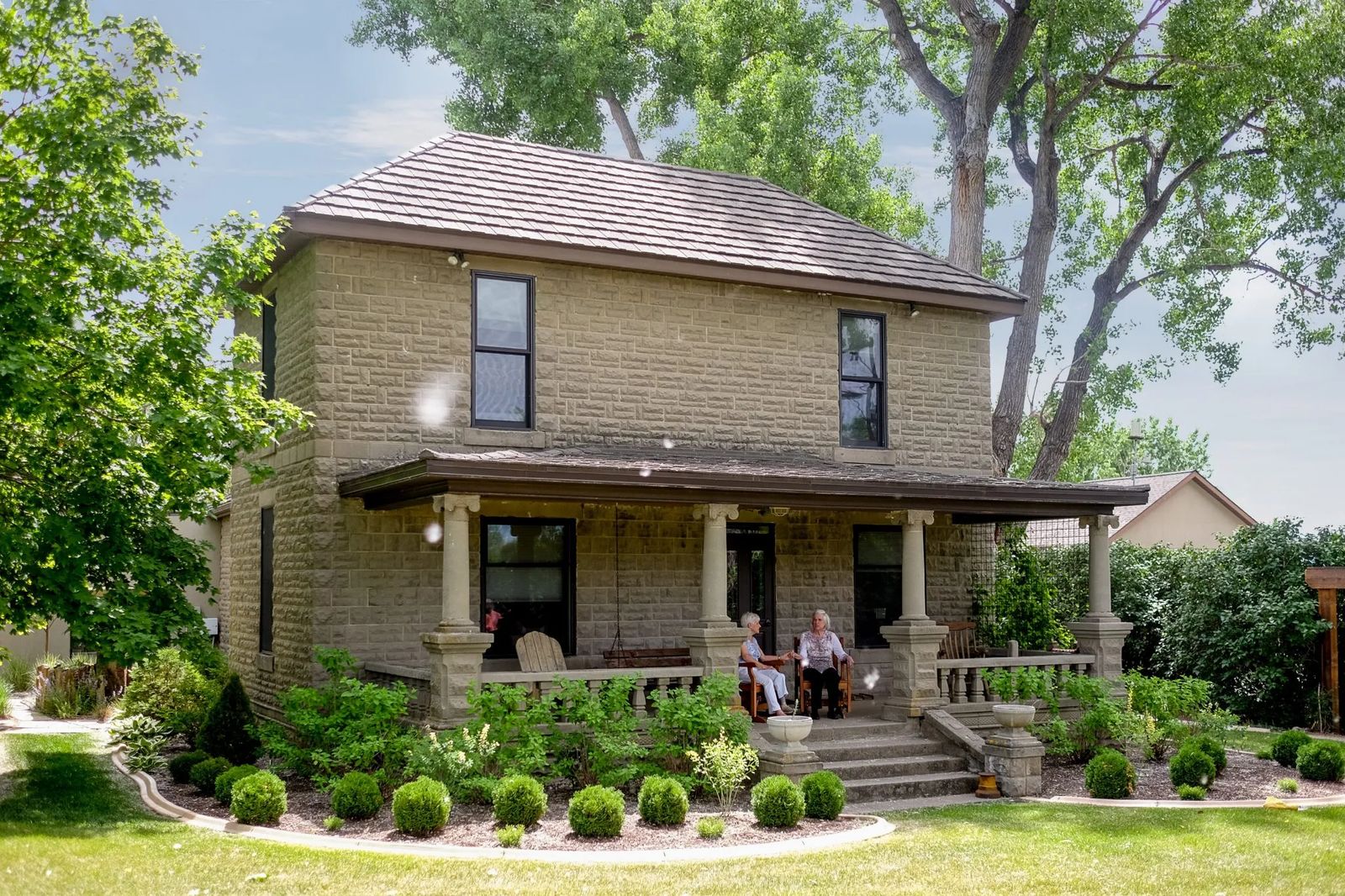 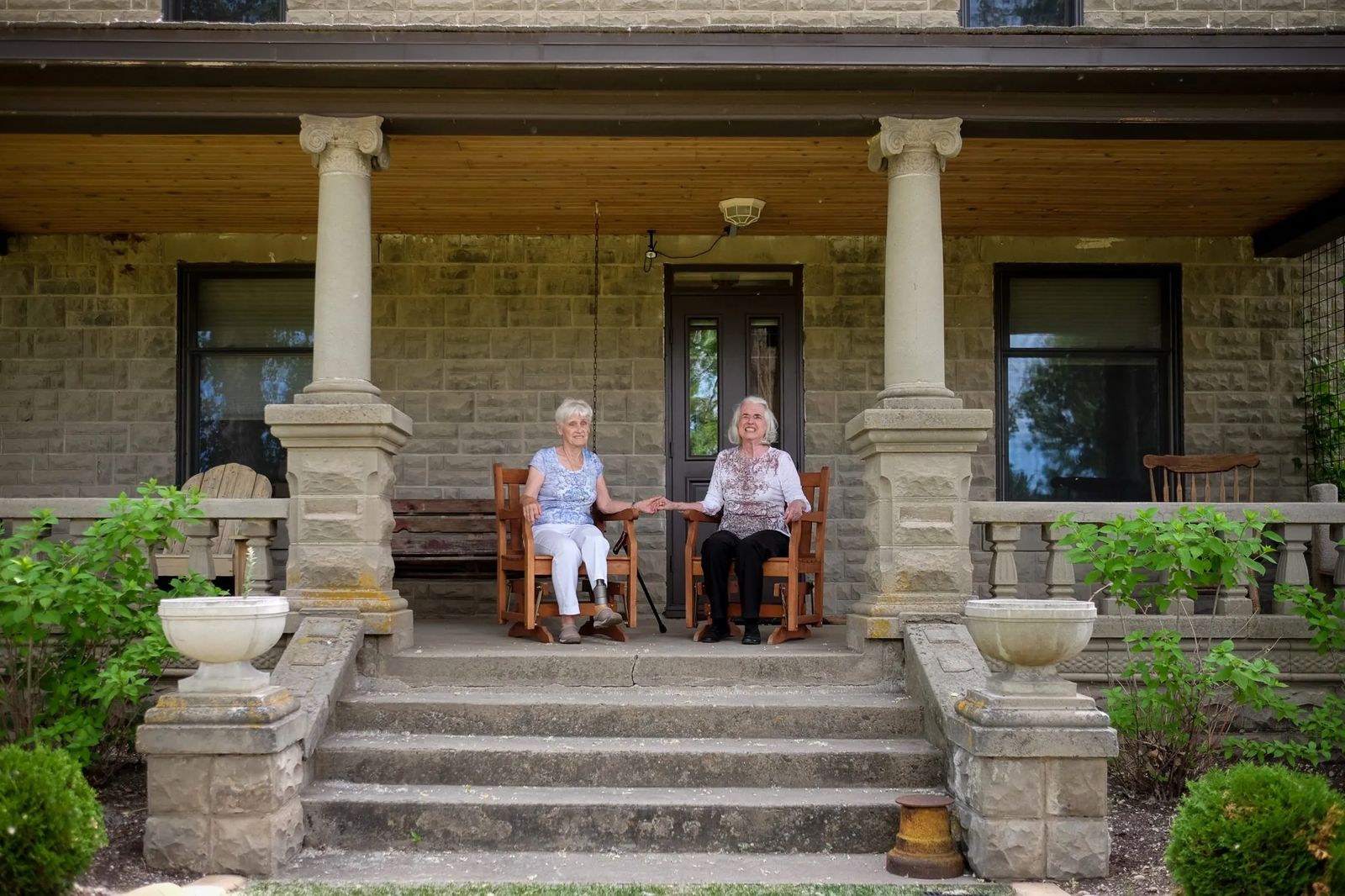 The sisters hold hands as they sit on the plantation-style veranda reminiscing what it was like those many years ago. “I remember when I was about three years old when we walked over here. It was about a mile and there were no cars then,” laughs Ilah. “Very few,” smiles Jean.

Two darling, little blonde-haired sisters, a year or so apart in age, appreciated living a good life on the Billings Bench with their older brother, their parents and grandparents. When the girls were ages 9 and 10, the family moved to a farm near Boyd, Montana. They attended a one-room schoolhouse before graduating from Joliet High School. Jean was valedictorian of her class. Ilah would marry Ray Larson of Cody and go on to become a nurse. Jean would wed Daniel William Dimich Sr. and would take time to raise her three children, Scott, Linda and Karen. Eventually, she attended Eastern Montana College to earn a BA in Business.

Both Jean’s and Ilah’s husbands passed away 15 and 18 years ago, respectively.

Pondering life as they sit in the sunshine on their grandparents’ porch, Diane and Scott savor this special moment in time.  “This is the first time I’ve been here that I remember,” says Scott, as he stands on the front lawn listening to them share their yesteryears as Engle children. 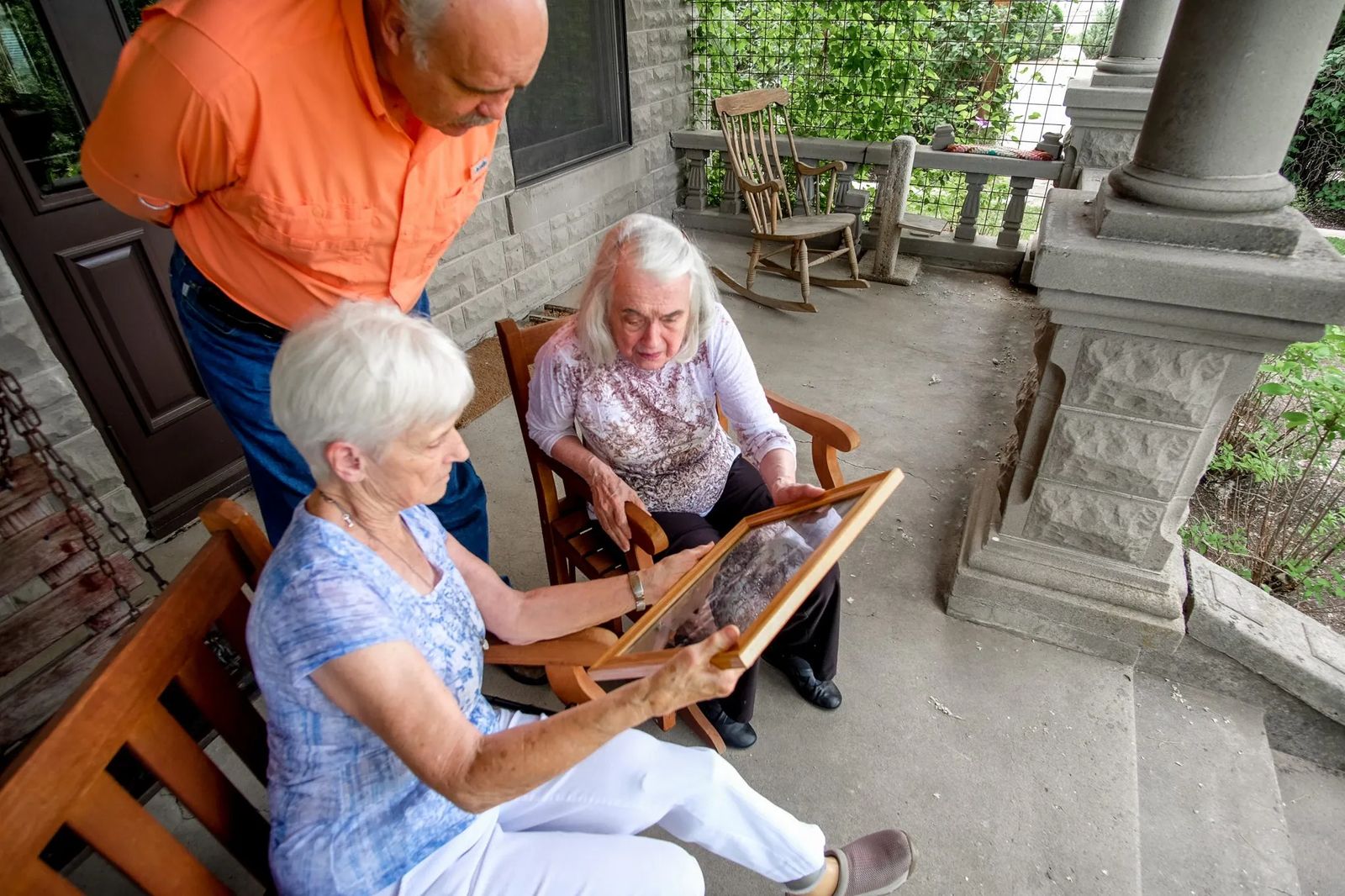 The Engle home exudes immaculate restoration and upkeep, inside and out. Both front and back porches defy the years with the back porch now enclosed as part of an enchanting sunroom. Even the stairs to the old root cellar, which the sisters well remember, are part of this space. “This is very nice,” exclaims Ilah.

Floor-to-ceiling windows and French doors offer an excellent view in the back of the house. “They used to brand cattle out back,” quips Ilah. “It was a working cattle farm then. The land went up to the highway. Grandpa had help with the farm and Grandma had help in the kitchen. Everyone always ate at a common table that swayed in the middle from so much food. And the farmhands slept downstairs.”

The front living room, along with the staircase up to the second floor still looks familiar to the sisters. So does the main floor bathroom. This quaint little room features the original claw foot tub, epitomizing the era. 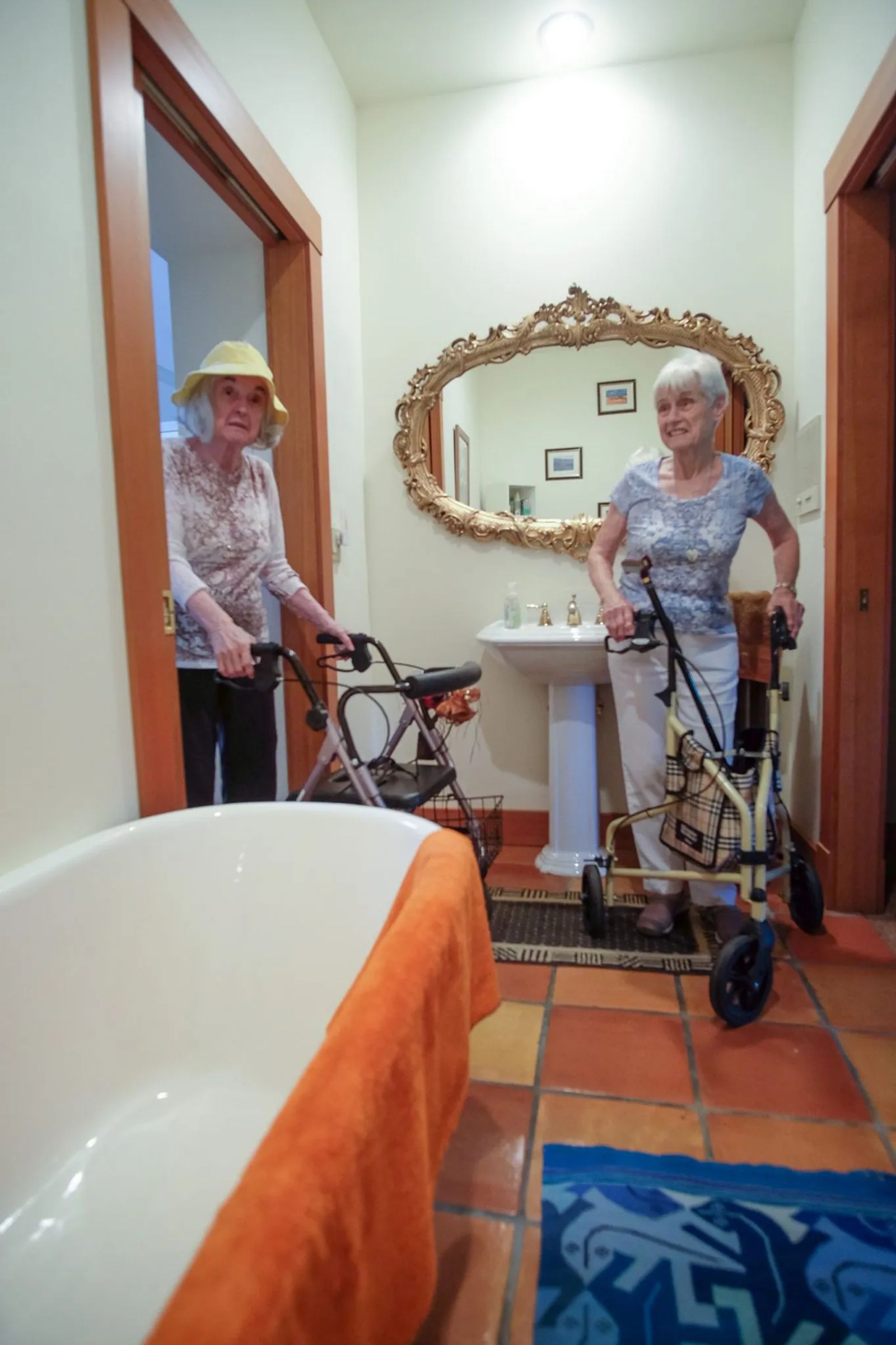 “In this time of life, to see our grandparents’ homes, it’s incredible,” reflects Ilah. “It’s so important to collect memories and pay attention to old photos.” This day of reflection cast a long line back to the past of two “amazing sisters.” It was a snapshot of two women raised by one of Billings’ first families — a family steeped in rich tradition who paved the way to the providence we enjoy today.

“Time marches on,” declares Jean. “I’ve often thought about how in the old days you married the country boy down the road. That’s what our mom did. It’s the way it was!”