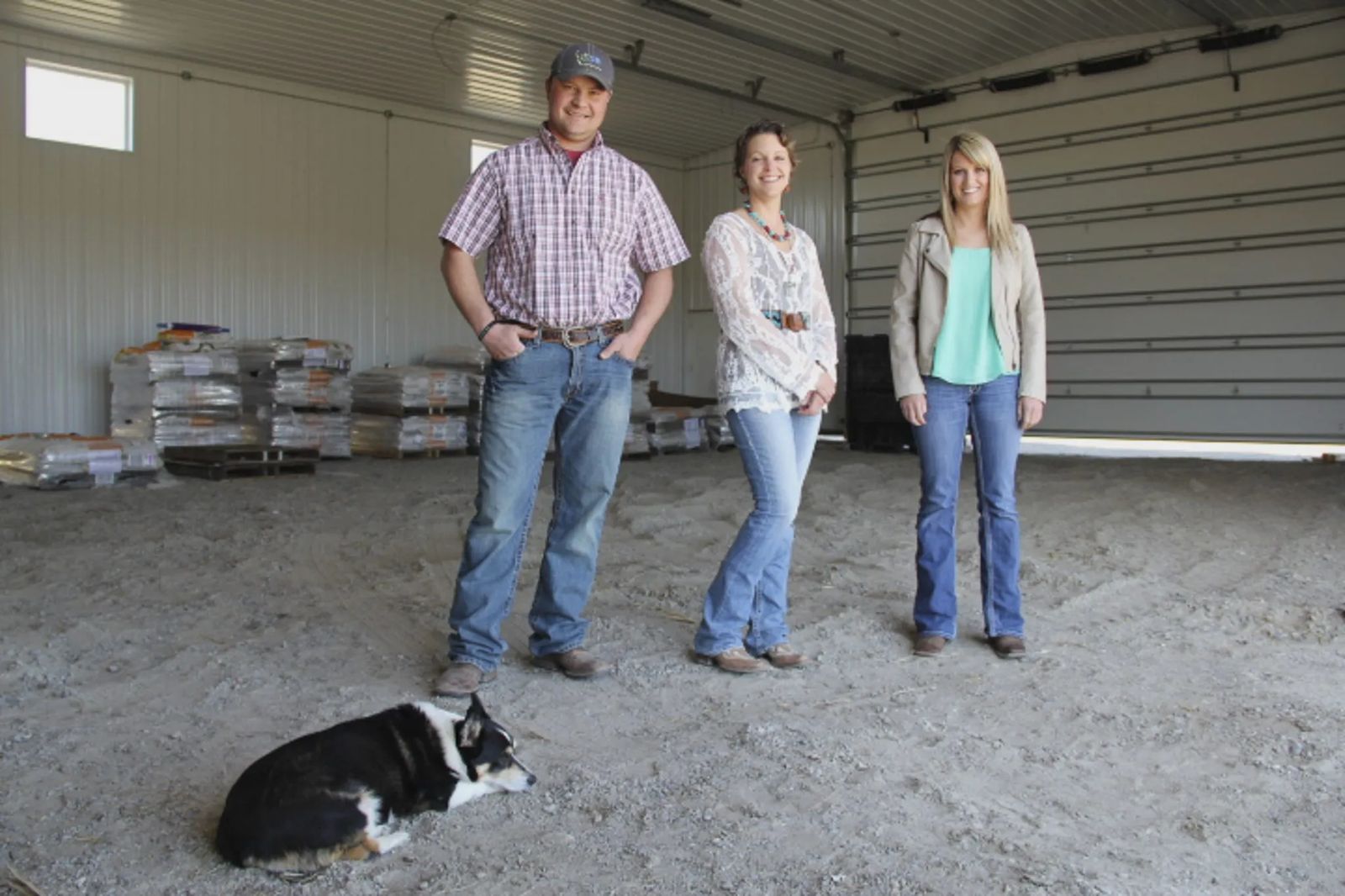 They've Got You Covered

On her husband’s farm 25 miles east of downtown Billings, Kate Vogel is standing amid green blades of annual ryegrass on what would normally be bare soil between silage stalks. She is holding a forage collard plant, its tangled roots clinging to a big mass of black dirt.

The collard was part of a cover crop her husband, Marc Vogel, planted last fall, after harvesting a crop of silage corn.

“They provide great grazing for livestock in the fall,” Kate says of the collard plants. “And they have this great tap root, which creates a macropore to allow water to move into the soil while breaking up hardpan layers. They also have a lot of fibrous roots, which help build soil structure.”

Kate will bring that mixture of knowledge and enthusiasm to bear when she starts talking about any of the plants incorporated into the cover crop mixes that she and her husband sell through their 2-year-old business, North 40 Ag. And keep in mind that they have access to almost a hundred species of seed. 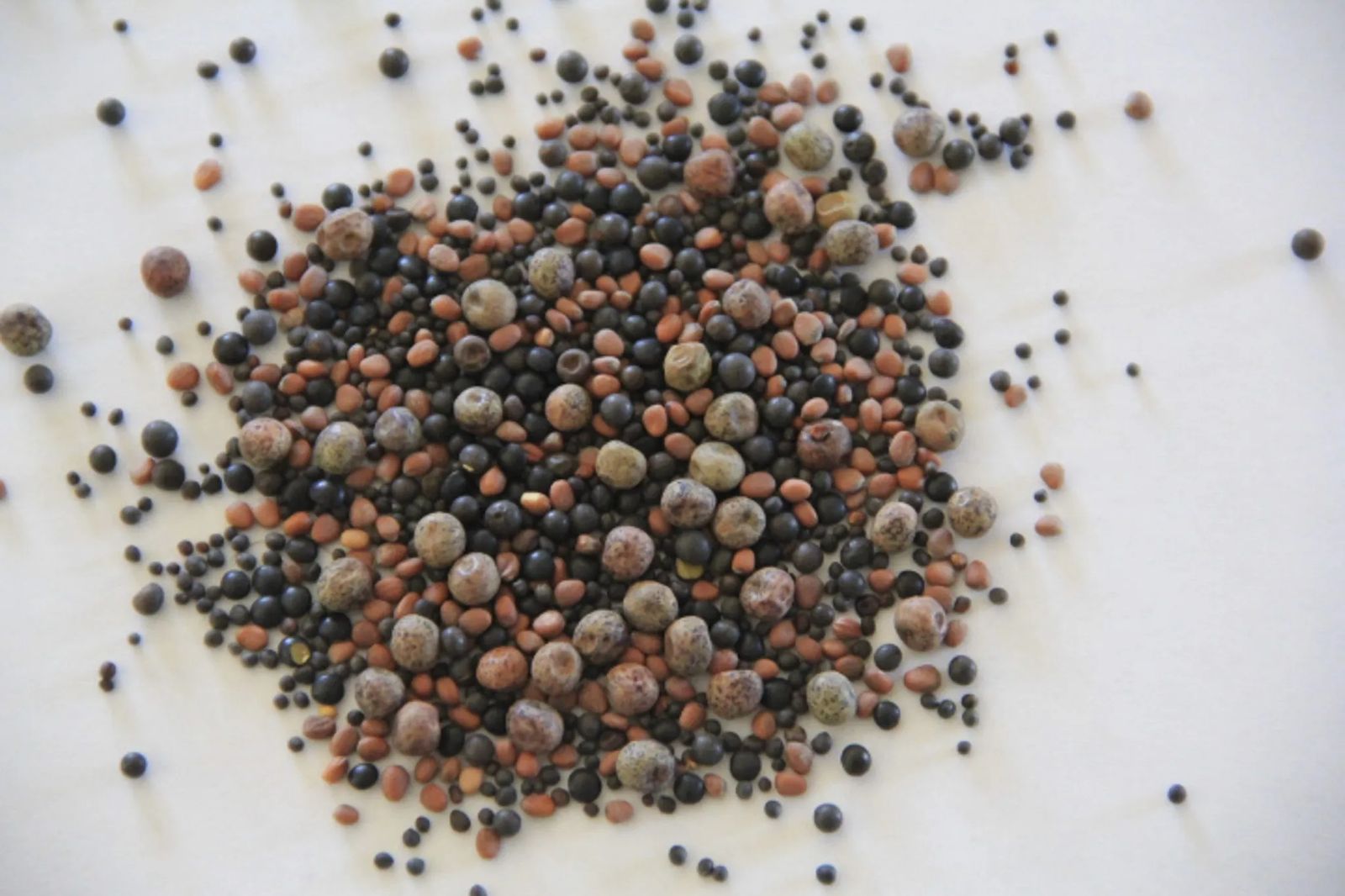 They custom-blend the seed into what one of their customers, Reg Hoff, calls a “cocktail mix.” Hoff, who farms and ranches north of Forsyth, is in his third year of working with North 40 Ag to put cover crops on the irrigated fields on which he formerly planted grain in the spring and then left idle after harvest.

“It’s like a double crop,” he says of the cocktail mix. “It improves the ground, plus it gives us aftermath grazing in the fall for our livestock, so it really works well for us.”

That’s the kind of feedback Kate lives for.

“That’s the really fun and rewarding part, to hear from people on how well it’s working,” Kate says. “You don’t feel like you’re selling something. You feel like you’re actually helping make a difference.” 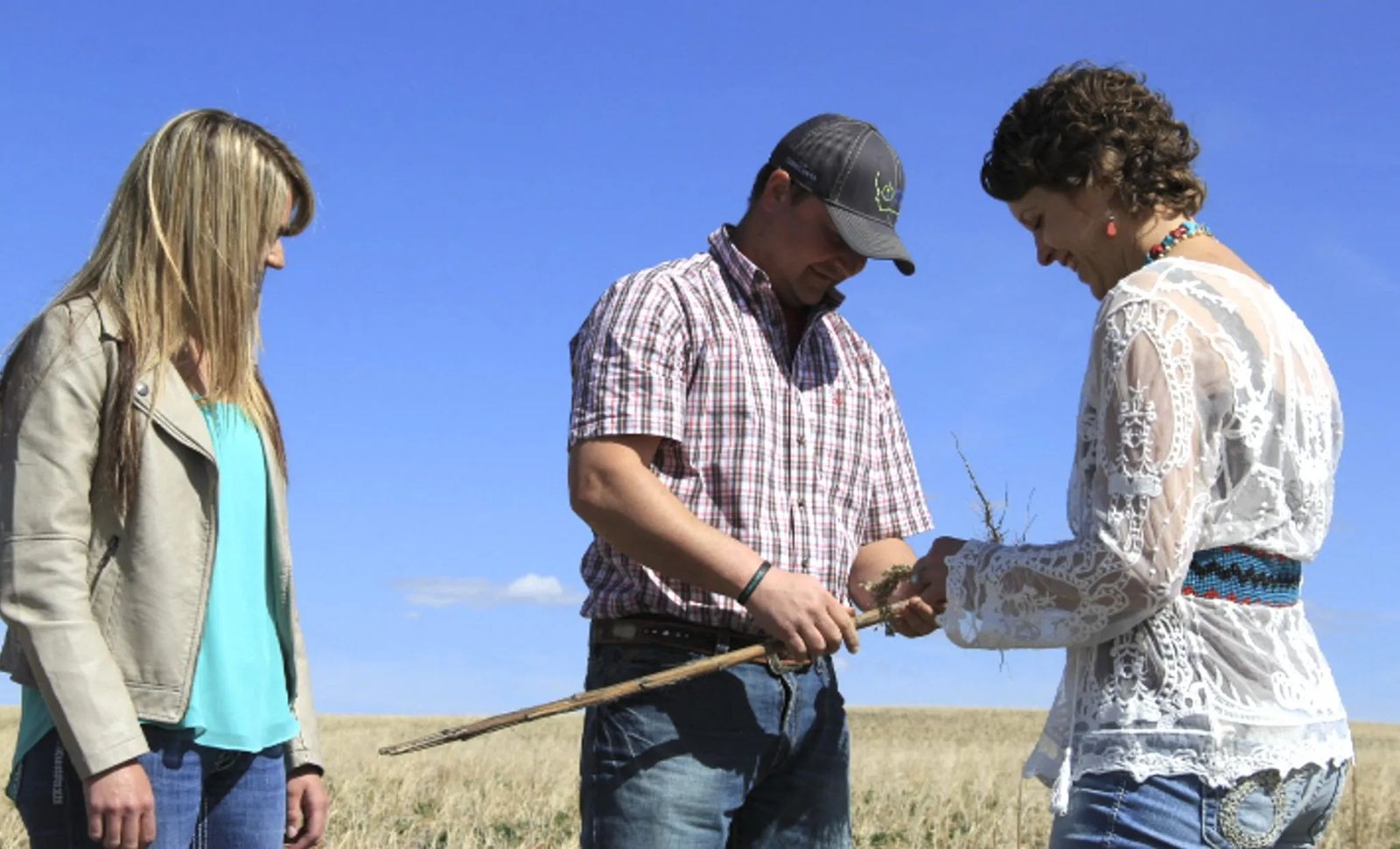 In fact, it’s all been working so well that North 40 Ag is already expanding. In December, Kate hired Amanda Riter, who grew up on a ranch south of Broadus. Amanda makes sure seed mixes get done in a timely manner, and she’s also been making deliveries of seed blends and helping out at trade shows and workshops.

The Vogels are also in the process of putting up a new building a stone’s throw from their house. The 4,000-square-foot building originally was going to be used for tractor storage, but their plans changed as North 40 Ag got increasingly busy. Plans now are for the building to have three offices and room to do their own custom-blending, rather than having it done by their seed supplier in Nebraska. They will also be using the new building, expected to be ready by May, for inventorying and bagging. 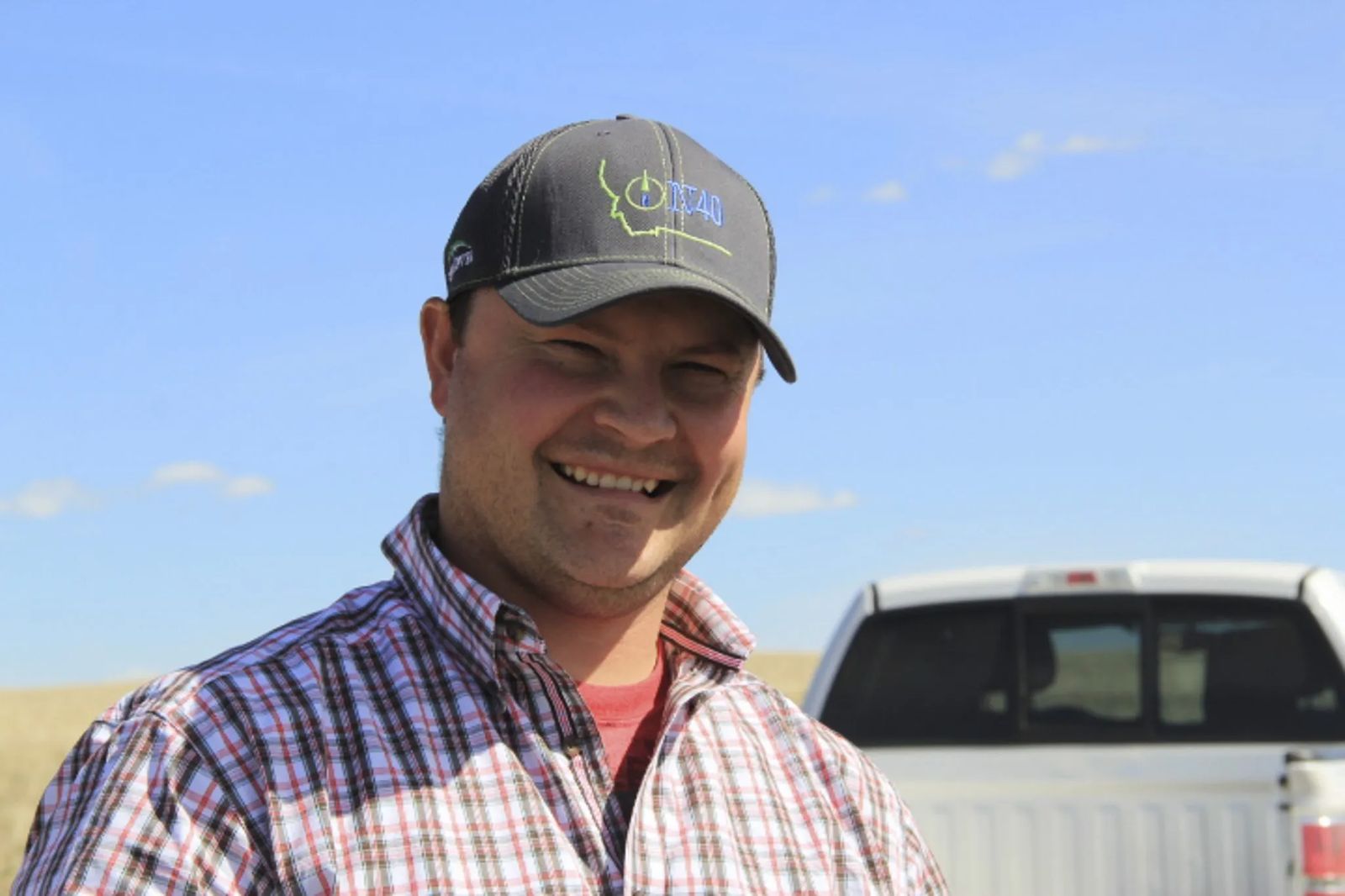 Marc’s family has been farming and feeding cattle in Ballantine since 1920. He and his parents, an uncle and two brothers mainly grow corn and raise cattle, and they have a finishing feedlot. Kate grew up in Colorado. Her parents worked in town but they lived on a ranch, and she later earned agronomy and chemistry degrees from Colorado State University, and then a master’s in agronomy from the same school.

Kate started out in chemistry, but says she “didn’t like the idea of working in a lab with no windows all the time, so I went over and started talking to the agronomy department, and I started taking some soil classes. I just loved it. There’s so much in soil that people don’t understand or give credit to. It’s a pretty fascinating science.” 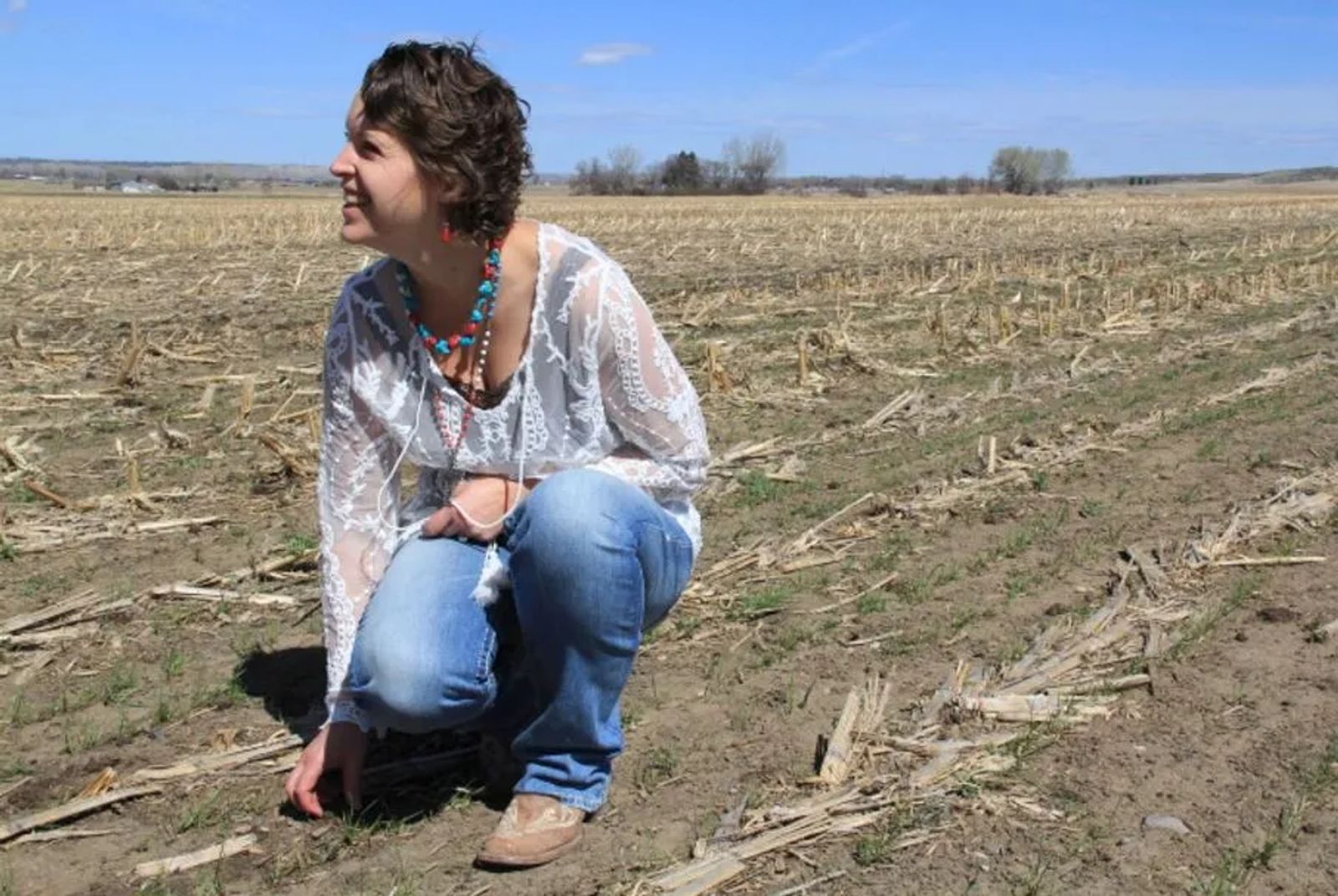 She moved to Montana in 2007 to work for a Bozeman-based oil and gas consulting company, mostly working in Wyoming’s Powder River Basin on monitoring the use of coal-bed methane water for irrigation. She met Marc after college through a mutual friend and they were married in 2013.

Marc said he spends 95 percent of his time on farming and at the feedlot, but Kate and Amanda both work full time and more on North 40 Ag. Since its start in 2014, the business has had three components: seed sales, agronomic consulting and education.

For the first two years they offered workshops and field days around the state on their own. This winter, funded by a $79,500 grant from the USDA Risk Management Agency, they put on 18 small roundtable workshops in Montana and northern Wyoming, talking about making the transition to no-till, diversifying cropping rotations, using cover crops, decreasing fallow frequency and more. They also paid close attention to the needs of attendees, letting their questions set the direction of the workshops.

“We’re very driven by the people who show up,” Kate says.

More than 300 producers attended the workshops—including 38 in Joliet—and North 40 already has 10 field days scheduled throughout the region this summer. Field days give producers across Montana and northern Wyoming a chance to see the benefits and production of cover crops—in the form of above-ground biomass and below-ground root structure—in varying environments. 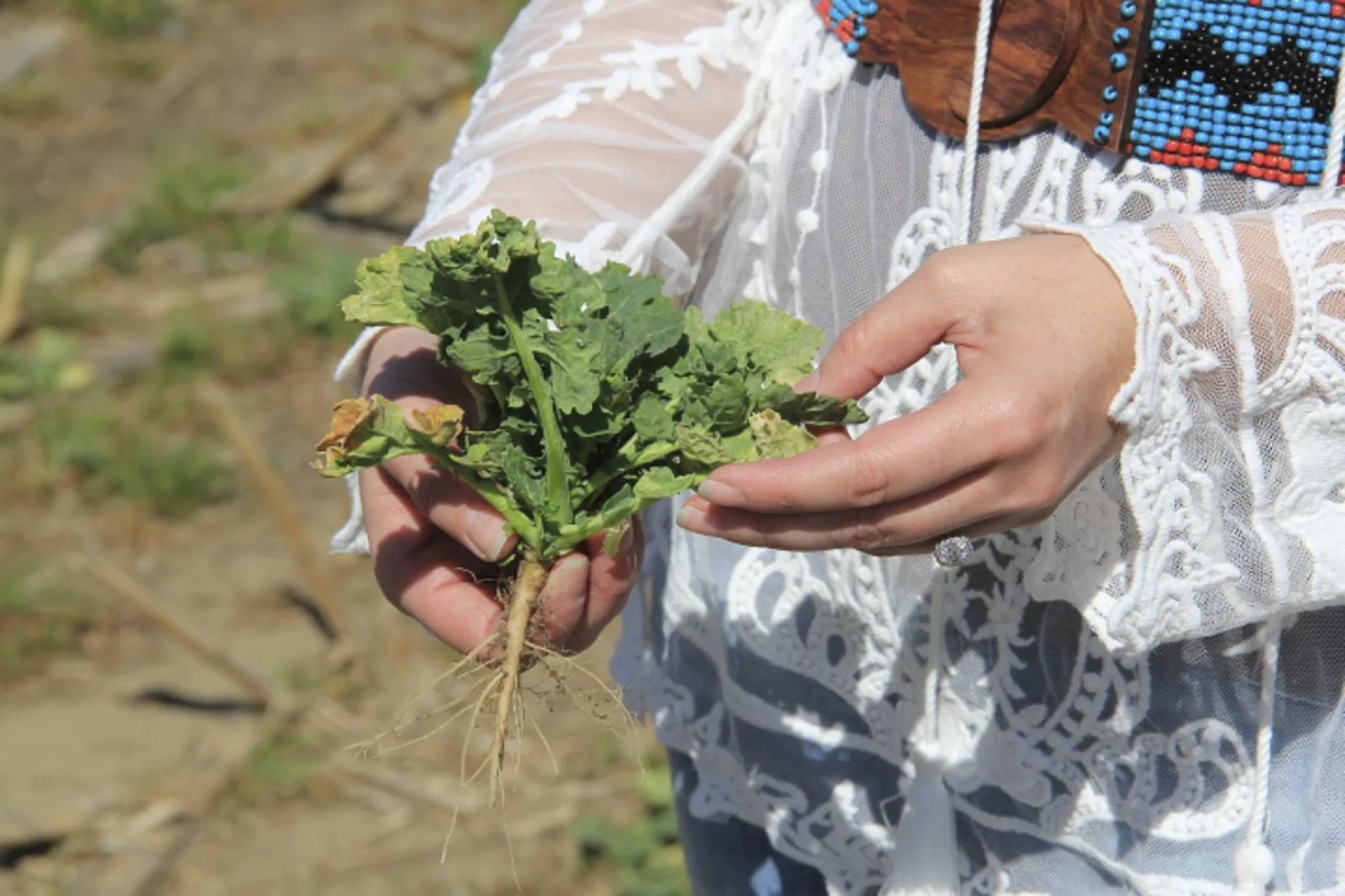 Kate says she visits some customers’ farms to get a firsthand look at the needs of particular fields, but usually she relies on phone calls and emails. With cover crops, she says, every seed species fills a particular niche. At the Vogels’ dining room table, Kate brings out some sample bags of seed mix. One contains peas, lentils, mung beans, sorghum-sudangrass, German millet, brown midrib corn, broadleaf mustard, turnip, sunflower, safflower and buckwheat.

North 40 Ag groups its seeds into four basic categories: legumes, good for fixing nitrogen in the soil and attracting beneficial insects; grasses, which are good for grazing and building lasting residues, while their fibrous roots build soil structure and organic matter; brassicas, which include turnips and radishes and are “great nitrogen scavengers” of what has leached past the root zone of traditional crops, bringing it back to the surface; and other broadleaves, which attract bees and beneficial insects.

It’s kind of like a puzzle,” Kate says. “If A, B and C are your problem, how can you mix and match these together so you can make sure that you’re meeting all the needs?”

When their new building is ready, the Vogels will be able to make custom seed blends more quickly and efficiently. They will continue renting storage space for seed shipments in a warehouse attached to the Worden-Ballantine Water and Sewer District office.

They sell seed to some organic farmers, but most of their customers are conventional producers, and most of them are in Montana. In the first two years they sold mostly in eastern Montana, but now they’re moving into the Golden Triangle and central and north-central Montana. And by the beginning of April this year, they’d already sold as many acres of cover crop seed as they did in all of 2015.

Kate says North 40 Ag is a business, sure, but they don’t do things like workshops and field days to promote their products, but rather to educate producers and help their operations become more sustainable while reducing inputs.

“Our goal is to try to change agriculture,” she says. “Adding in diversity and crop rotation and cover crops—really stimulating the soil—is going to help shift agriculture in a positive direction.”