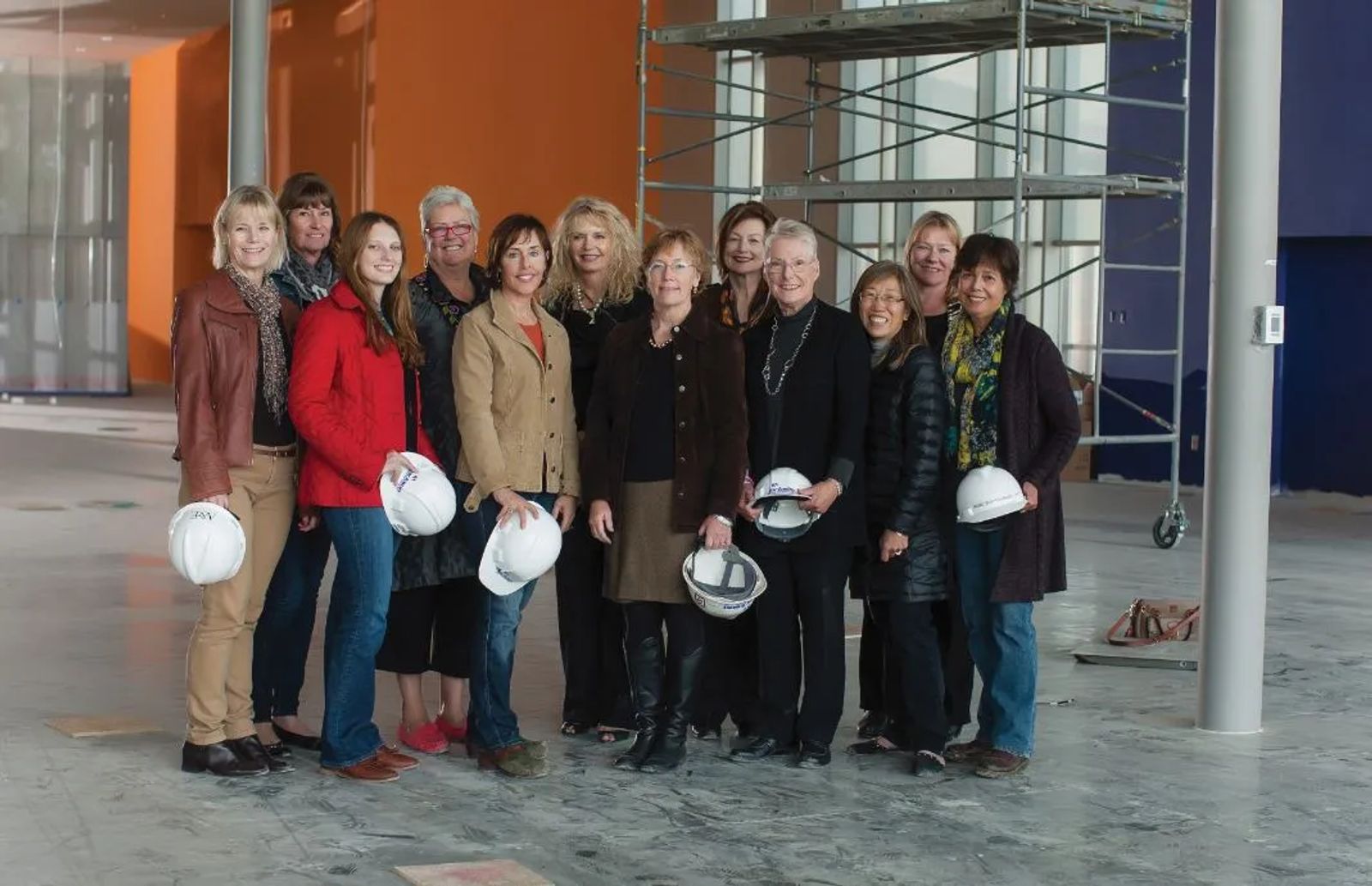 Turning the Page with the New Billings Public Library

A Tale of the Women who made it a reality

In 2014, on the first day of February, the new Billings Public Library will open its doors. Though many people contributed to its success, this tale is about the women leaders of recent times who waved their savvy and spirited wands to make possible the seemingly impossible. These very women from the Parmly Billings Library Foundation, the library and the community dared to believe that Billings deserved a new library building. Over many years of fortifying troops, they were the warriors who made a dream in the Magic City come true. This is the story of how the new library building came to be.

Once upon a modern time, a Library Director named Ellen Newberg along with City Administrators John Lawton and Alan Tandy started the Parmly Billings Library Foundation for fund raising and special projects. The time was 1987. On a white horse, in rode a prince named Royal Johnson who after rescuing city funds set aside in the budget secured two other donations to put over $100,000 into the Foundation’s treasure trove.

The Foundation worked hard to raise the money to keep up with the library’s growing needs. They did so by befriending the community and acquainting it with all the library offered. So began ‘Lunch at the Library.’ Members of the board of directors – Jean Anderson and Suzanne Smoot – invited ladies and gentlemen from the community, young and old, to tour this castle of knowledge.

But as the Foundation was building strength, the seat of the library director’s throne shifted from Ricky Johnson to Diane Cross to finally Bill Cochran who runs the library to this day. Library hours were increased, remodeling occurred, and a new Dynix computer system was put in place. Then in 1996, a carriage of knowledge, a new Infomobile brought books to those who lived afar followed by a Senior Homebound Van in 2000. In 2001, the year of the library’s 100th birthday, the Teen Pit opened providing exclusive space just for teenagers. Board President Donna Davis with the help of Sue Hart, Joyce Jensen and Ken Eagen, Jr. put together Writers Under the Rims, A Yellowstone County Anthology, a collection of timeless writings from and about the kingdom of Yellowstone County with proceeds going to the Foundation.

Then the annual request letter came to be. Beautiful President Bette Bohlinger came up with an enchanted idea to seek yearly donations. To this day, the image of the 'Princess Bohlinger' folding letters and stuffing envelopes for end-of-year giving lives on and has become a time-honored tradition.

In late summer of 2002, a $12 million battle began. Quickly all the queen’s horses and all the queen’s people were rounded up. A mill levy to repair the broken library building was proposed by the city council to put before voters. Gallantly, Library Trustee Carolyn Boyd and Foundation members Donna Davis and Lise McClendon Webb led a strong fight, but in the end, the library lost. Sadness and disappointment fell over the people, but not for long. When the dust cleared, the Foundation diligently prepared for the next battle.

When the beloved Ann Miller, who saved the Alberta Bair Theater in failing times, reigned as the new queen of the Foundation, she and her board hired Leslie Modrow as the new Development Director. In order to grow and build support, the Foundation knew it needed someone to command the court. With Modrow’s fund raising background, she was the perfect choice. So when board member Norma Buchanan suggested a new event, ‘Food for Thought,’ Modrow performed her wizardry. Now, seven years later, it is the powerful fund- and friend-raising event for the Foundation. Lords and ladies step through the doors of the library and experience a beguiling evening of food and conversation on topics from near and far.

But fund raising efforts did not stop here.

Princess Buchanan along with lovely Sue Boedecker and captivating Carol Spielman introduced ‘Illustrate a Story’ for children to create their own books. President Stella Fong (yours truly) then summoned local artisans, civic leaders and community members to ‘Illustrate a Story’ of their own for auction. ‘Lunch at the Library’ was reinstituted which brought more awareness of the library’s assets and frailties. At all turns of the Foundation’s work, the Friends of the Library were constantly the energetic workers, always doing good work with the leadership of Presidents Nicki Brock and Mona Harris.

Kim Olsen of O2 Architects stands inside a portion of the new library going over construction plans.[/caption] 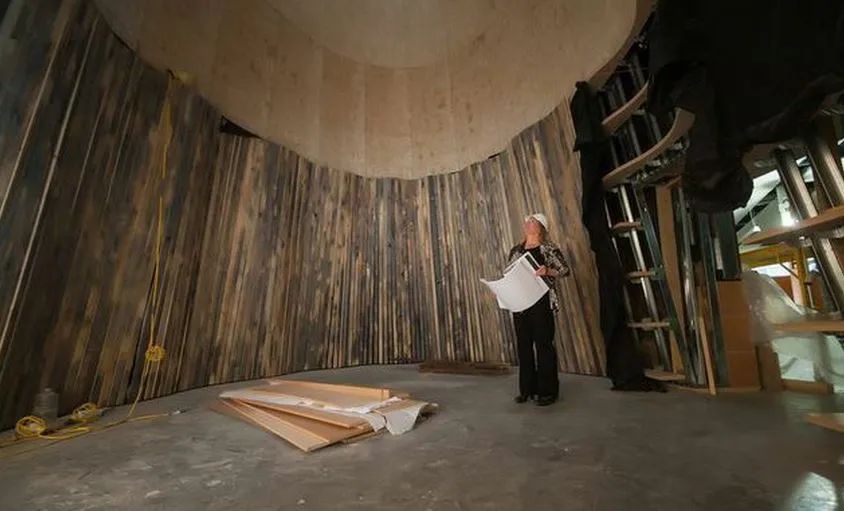 In the next chapter of the tale, Kim Olsen stepped in as queen of the Foundation. The volume of rumblings heightened as solutions were sought to retrofit the failing library building. Modern technology cried for a home in the ancient castle and Olsen’s architectural powers became most useful.

Then along came a woman who commanded kingdoms as the Executive Assistant to the Publisher of The Billings Gazette, Evelyn Noennig. As board President she dared to decree that a new library must be brought to Billings. Noennig admitted that she “felt it was time to take the leap of faith and having a great board we could be successful.” Consultants were interviewed to help with the Capital Campaign and the victor was Capital Quest with their knight Kevin Wallace. In his hunt for potential supporters, an anonymous donor came forth with $2 million and the donor’s only dictate was a building of “architectural significance.” The donor chose Will Bruder and Partners to draw up the plans for the new library and fortuitously Bruder selected O2 Architects for his Billings representative with owners Don Olsen and his wife Kim who knew the library’s workings intimately.

Good fortune continued as land became available just north of the library.  With chivalrous negotiations between Billings Clinic, Underriner Motors, Stockman Bank and the City of Billings, the library found a new home. But did the kingdom want a new library or an old one? A shiny new library would cost $18 million while fixing up the old one was $13 million. Why not try to raise $5 million so the city could have a new library building the Foundation asked?  So began the ‘Our City, Our Future, Your Legacy Campaign.’ Mary Underriner was recruited as team co-chair of the Capital Campaign. With her history as a long-time resident, business woman and volunteer in the Billings community, she held all the assets for a successful campaign. She was joined by Past-President Stella Fong.  With a team of more than two dozen people including wonders Mary Bolender and Kendra Freeck, 200 plus people pledged enough money to make the $5 million total before Election Day.  Success could not have been possible without the unabashed backing of city council members Nancy Boyer and Peggy Gaghen.

Though there was the challenge of raising monies to meet the goal of erecting a new building, there was an even tougher battle of convincing the city voters to approve an $18 million bond for a new building. A campaign was put in place led by the vibrant and tenacious Suzanne McKiernan and unbeatable Evelyn Noennig.  With the assistance of Molly Bell from Hilltop Solutions and pied piper board president Cara Schaer the fight of the summer began. The Billings Library Initiative for Our Community’s Next Chapter started with swords drawn. Brigades rang doorbells and made phone calls with the encouragement and organizing of Chris Schmechel. Diane Cochran stepped in directing the Speakers Bureau, where Library Trustees Shari Nault and Susan Lubbers, and Montana State University Billings Librarian Jane Howell could educate the community about the issues. Then gathering after gathering was staged. Rita Soldheim, Suzanne Smoot and Julia Warmer hosted barbecues and brunches to recruit support.

Development Director Leslie Modrow stands outside the new library under construction with a rendering of what's to come.[/caption] 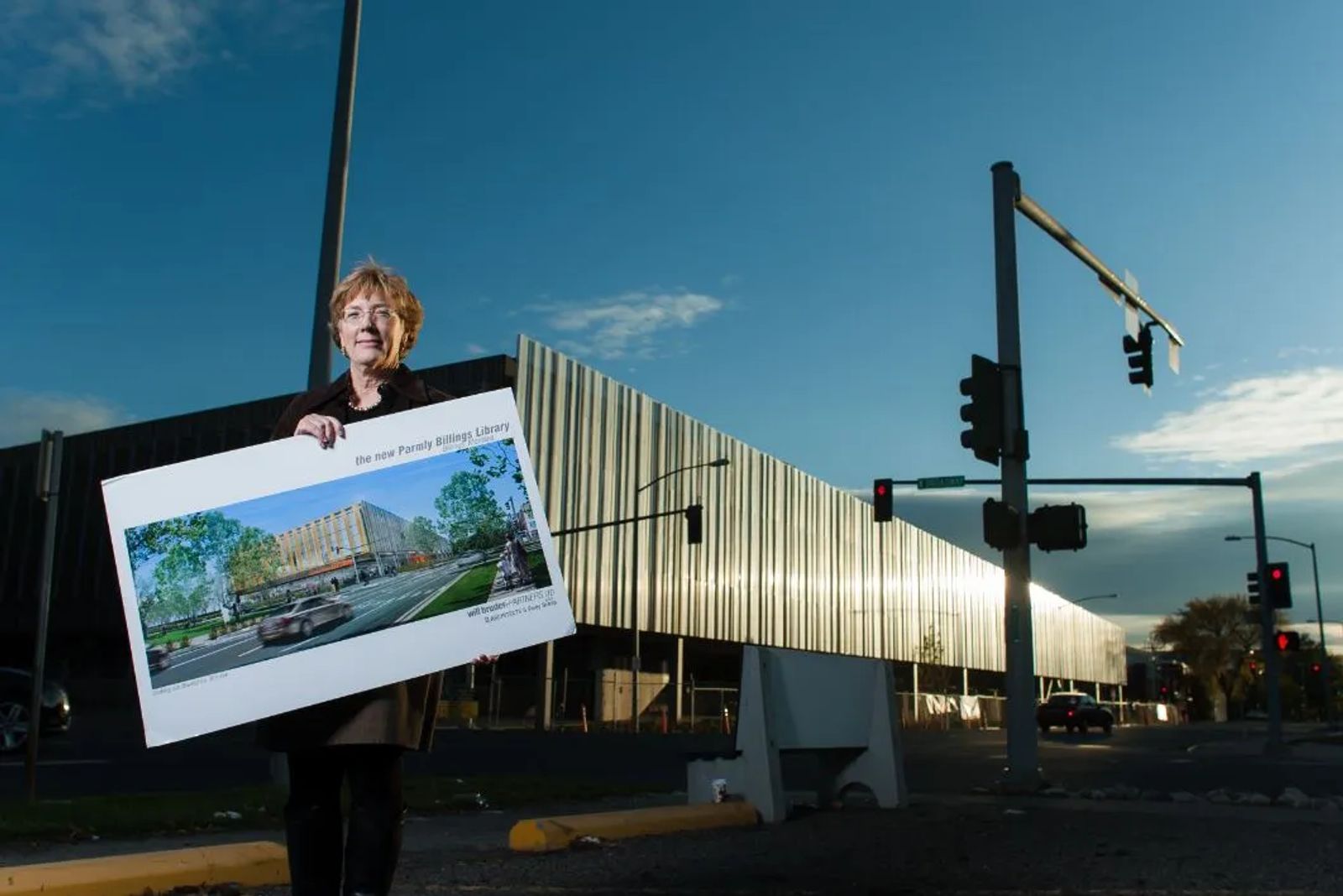 The community of Billings voted in a new library on November 8, 2011. For Suzanne McKiernan her thrill of victory was expressed, “What joy, exhaustion, excitement, and gratefulness. As I watched the faces of the many volunteers who worked so hard to make this happen, I couldn’t express the thanks I felt.” Leslie Modrow best summarizes the success by saying, “Women have a determination to see beyond the “no’s” and look for the “what if’s.” That can-do spirit is what drove the library campaign and continues throughout our community.”

So how does this tale end? Current board President, Kathy Cross believes, “The new library will have a positive impact on our community. Many people of all ages will benefit from all of the services the new library has to offer in a beautiful, relaxing, safe environment.” DeeAnn Redman, Assistant Library Director enthusiastically says, “Billings can be so proud of its new library! The building is both vibrant and practical, and will serve as a welcoming space to meet our neighbors, explore ideas, share cultural works and inspire creativity.” Library Board President Shari Nault believes, “This Library provides a portal to the future for all.”  With a new name in the new building, the Billings Public Library will live happily forever after because of the good fight by countless women warriors.

Features 66 computer stations including iPads, e-readers with an internet speed that has been enhanced up to 1000% over the previous library

The children's area offers a Story Tower that will comfortably fit 50 people, a craft area with an outdoor space and two family bathrooms

The library's upstairs features a skylight with a "cloud like" appearance and offers expertise with a genealogy area, a computer lab, a teen area and long tables that seat up to 34 people with plugs, lights and privacy

Note from the author: I had the incredible honor to work on the campaign for the new Billings Public Library as Capital Campaign co-chair. I cannot even begin to express the gratitude and amazement I have for the community of Billings for all its hard work and generosity in support of our new library. I know countless people helped in making this dream come true with their time, passion and donations, and I wished I could have named all of them in this article.